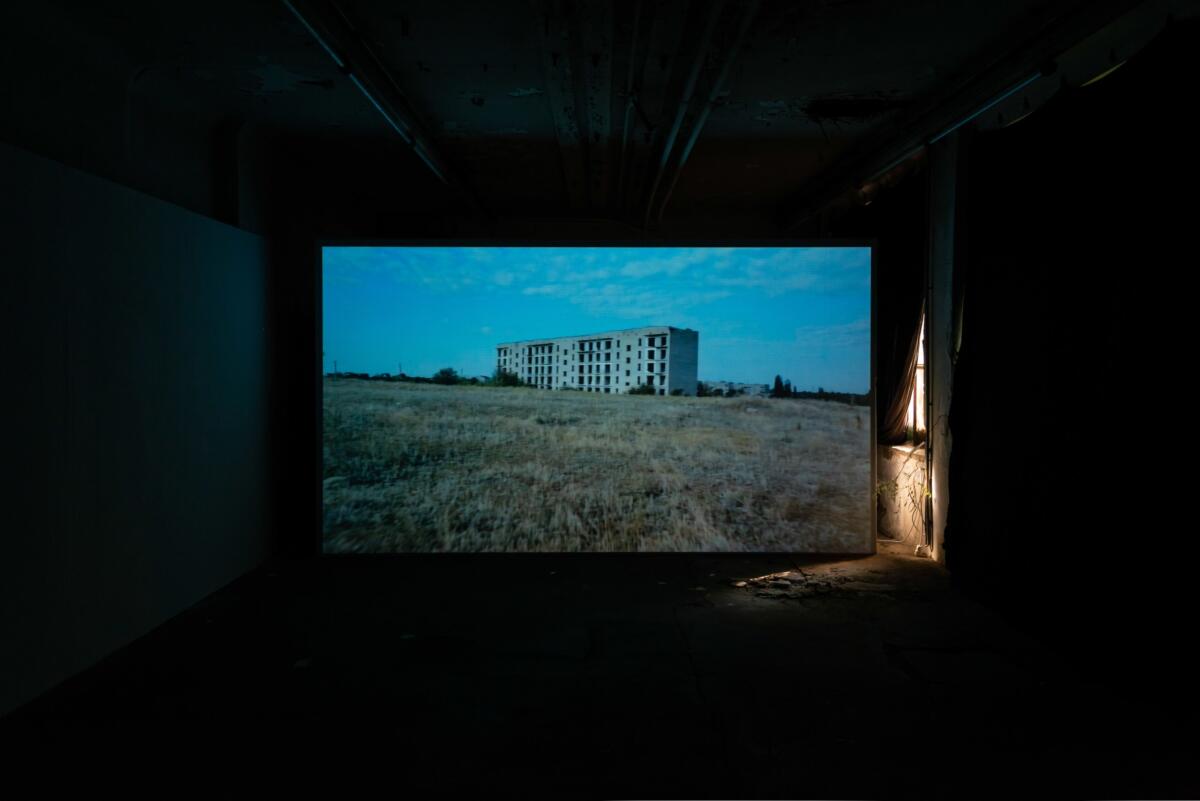 The exhibition Preserving the Shape curated by the artists Olena Newkryta & Anastasiya Yarovenko presents artworks that approach the notions of collective action and subjectivity, as well as material and immaterial heritage and its survival. It focuses on the various ways in which a collective, communal or cultural identity could be nourished in a context of full-scale russian imperialistic warfare and the destruction of living environments and public institutions. In contrast to cultural assets that can be preserved artificially via conservation or museum displays, community is a fragile and precarious entity that comes into being and remains only through forms of mutual care, social plasticity and solidarity. Preserving the Shape brings together documentary and conceptual works by Ukrainian artists that are part of a self-organised world-making and that embody a utopian or bygone collectivity. 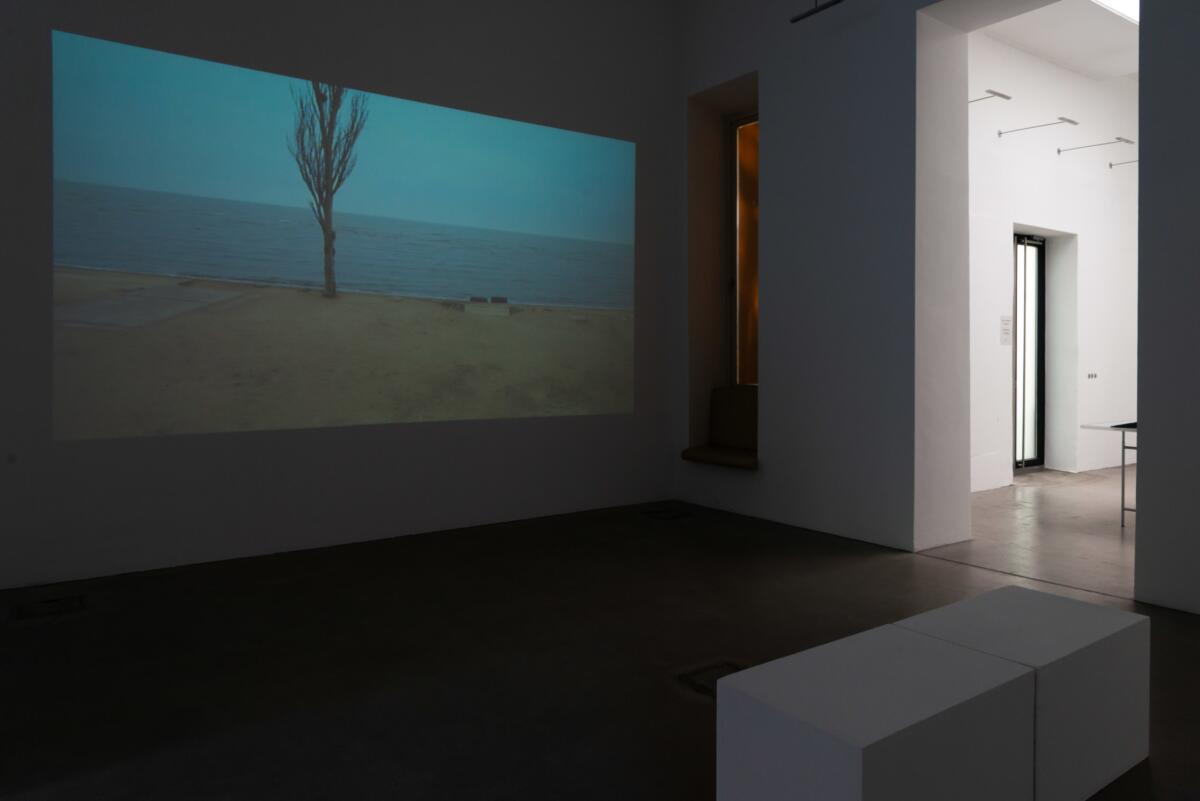 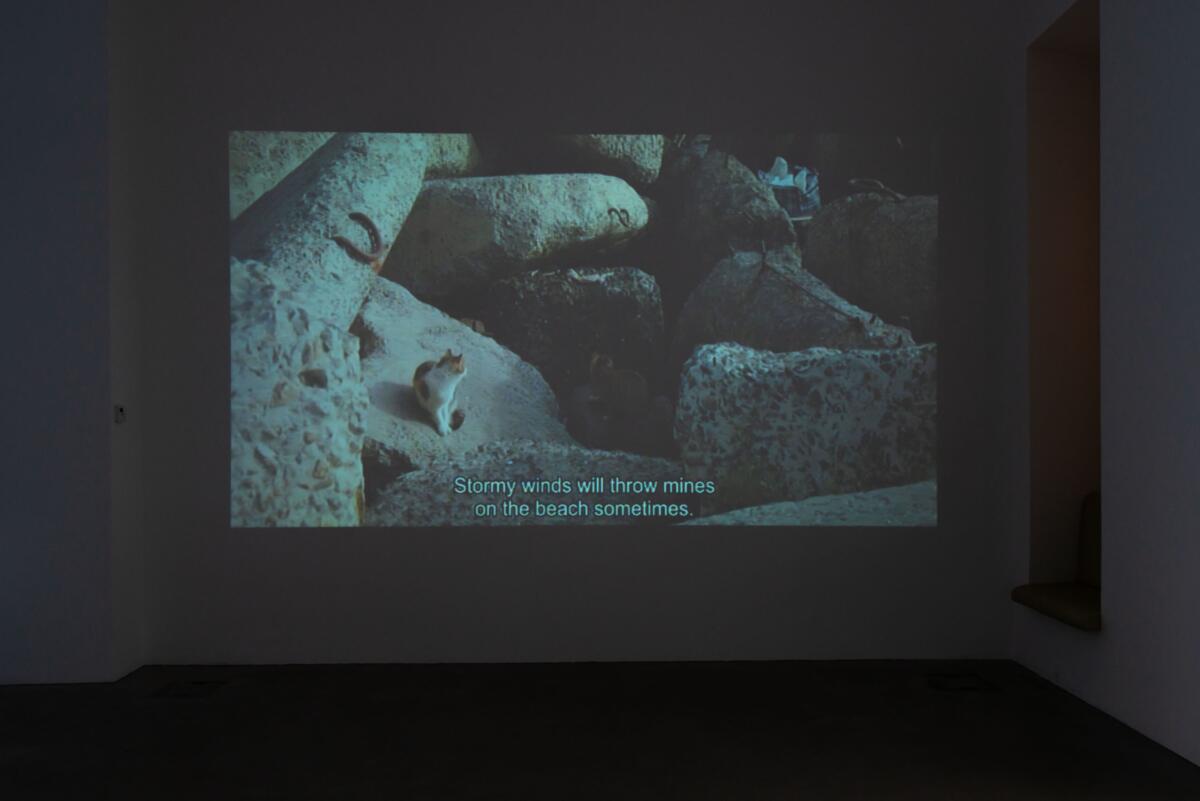 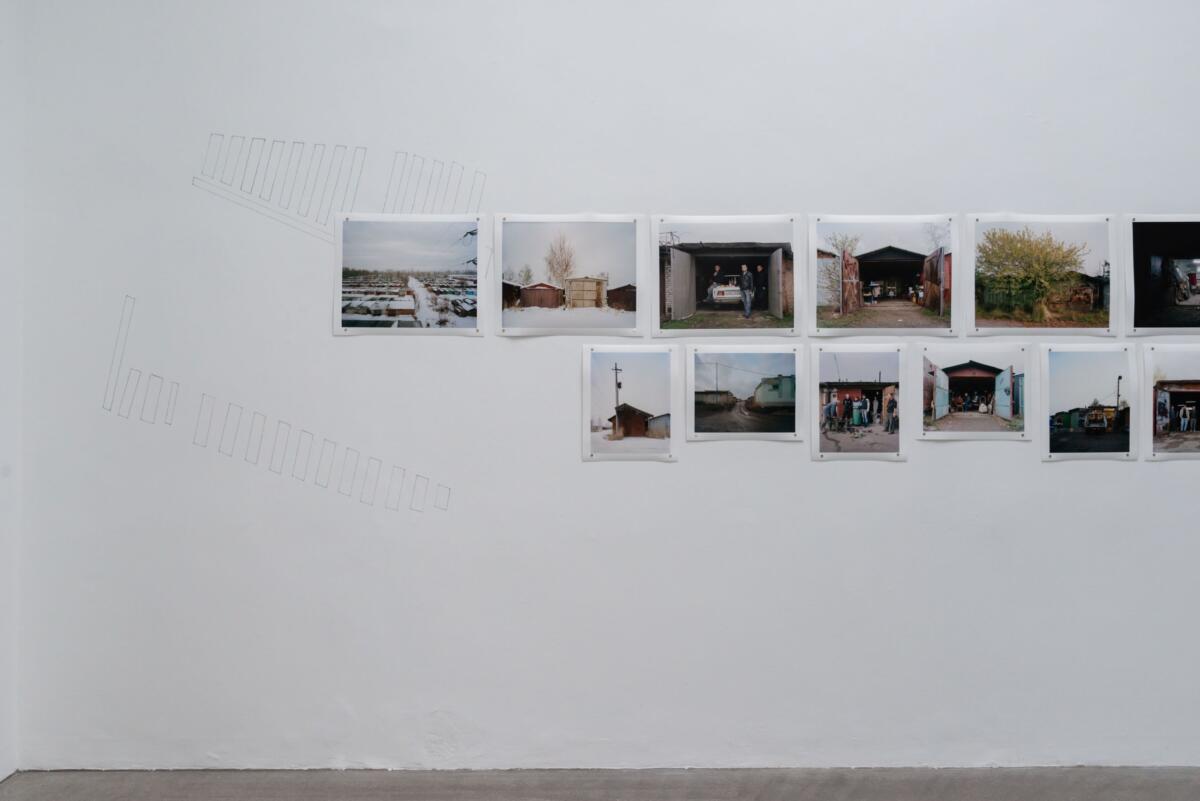 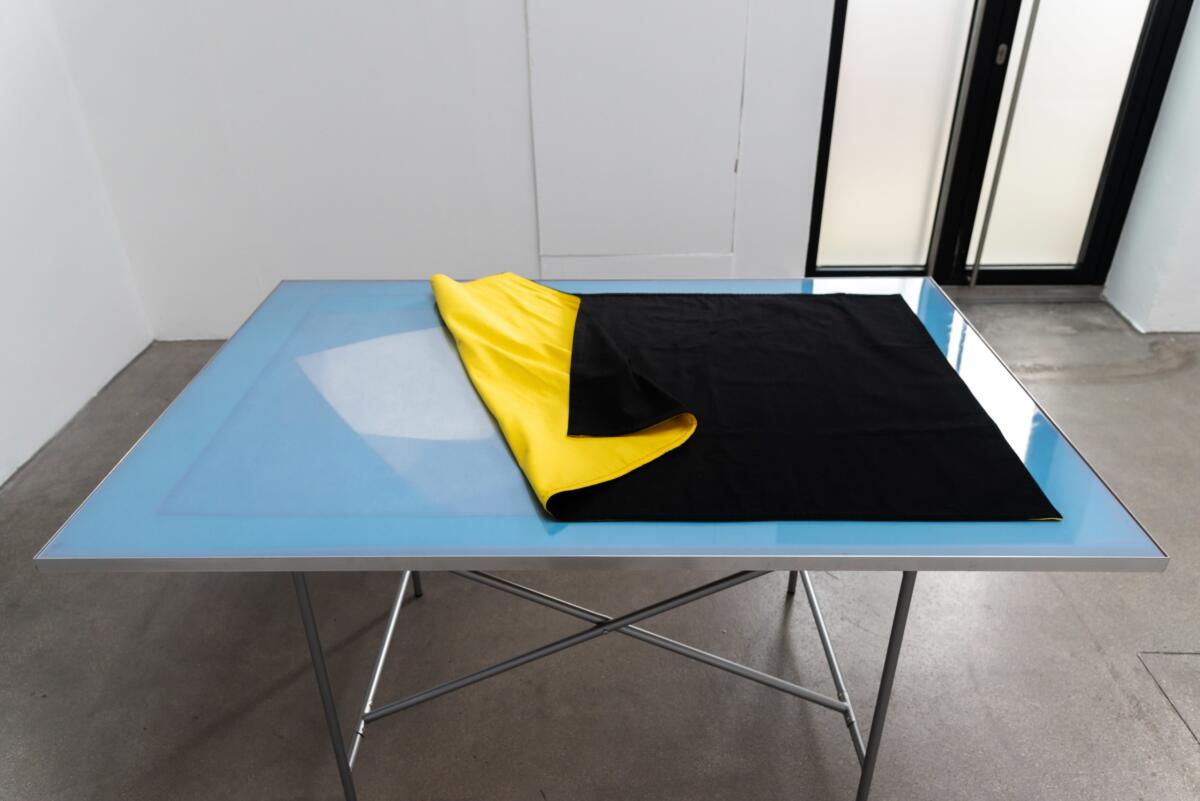 The works on display do not only refer to museological concepts of preservation, where restoration is seen as a process of keeping a pristine form; they go far beyond the procedure of excavating an authentic state. Rather, the exhibition highlights the plasticity of social life, actions of regeneration and ways of self-organisation. The artistic works do not produce nostalgia for the lost and destroyed, tangible or intangible heritage, nor contemplation of ruins as sites of authenticity.

In the context of an imperialistic erasure of history and cultural memory – including the physical destruction of spaces such as museums, libraries, monuments and other cultural sights – contemporary art practice does not only aim to preserve cultural artefacts as static objects, but rather highlights complexities and tensions between sanctioned history and personal memories, living experience, loss and precarity. Those fragile relations could be seen as processes of inflection, thus showing how history could be regenerated in self-organised ways – through communities, celebrations, spaces, memories. These ways of “preservation” belong to an anthropological reality of historical experience, economic and political precarity of objects, materials and living human and non-human actors.

From red to orange to green, fading into white – in the context of the exhibition, Switch on Red (2015, 3 min.), minimalistic performance with camera by Lada Nakonechna, becomes a self-referential commentary on how the relation to history and political agency is manufactured depending on the position of the protagonist or spectator. Indeed, in Switch on Red the visible discolouration is not due to kinetic forces, but rather the result of camera manipulation. This technological intervention highlights the constructed reality of film and of the cinematic apparatus that employs the position of spectator through ideological constraints masked by cinematic illusion. Lada Nakonechna often works with abstract and political representations as well as manipulations of established meaning. As a reflection on the deformation of history – is it a flag, a banner, a drapery? – Nakonechna contextualises the politics of abstraction and the cultural meaning of colour via relativity that manufactures the operation of gazing, contemplating, reading. The minimalist gesture of changing hue and saturation within the camera itself suggests subjective positions that propose, erase or transform certain historical, political and inherited perspectives. 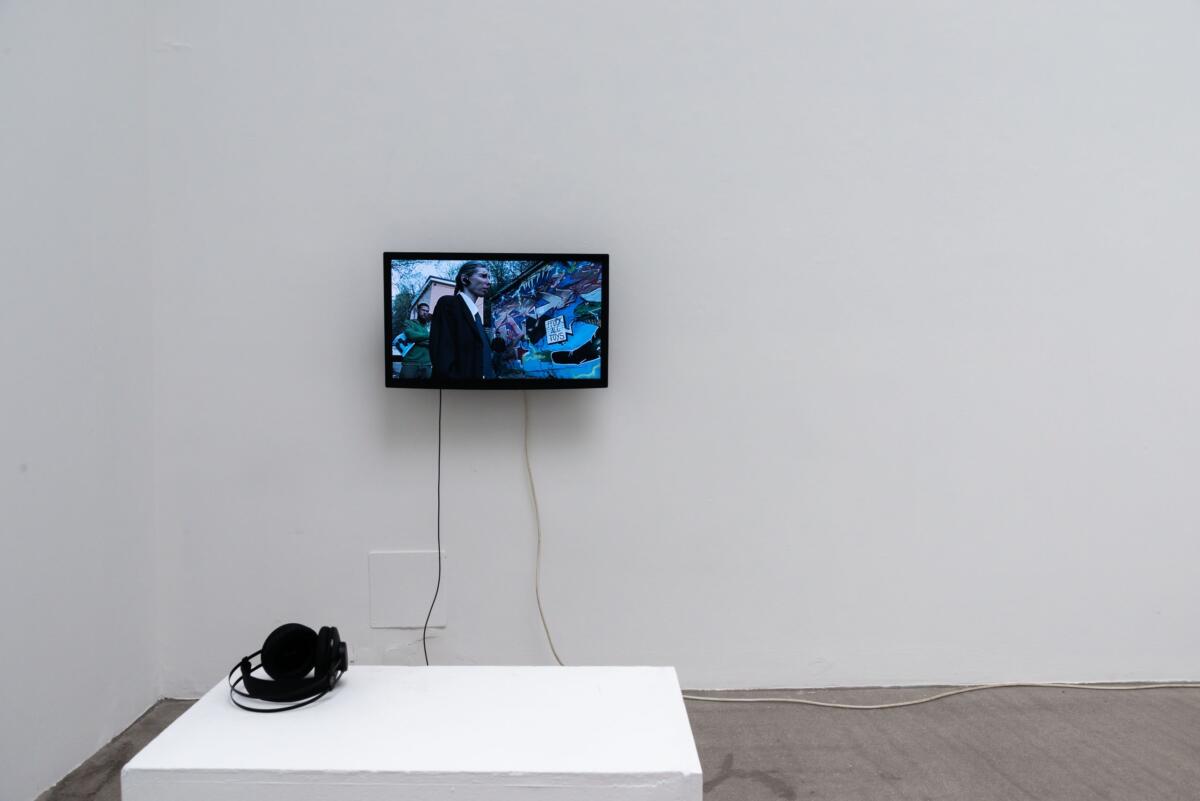 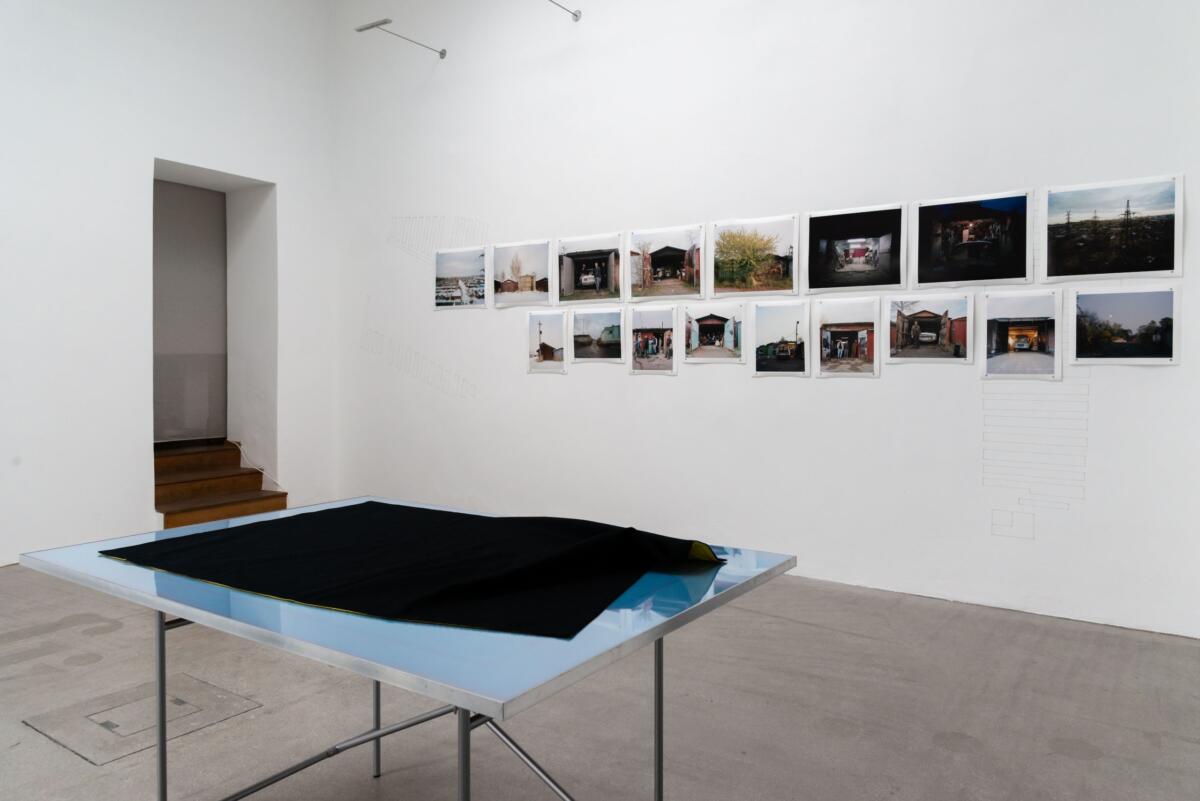 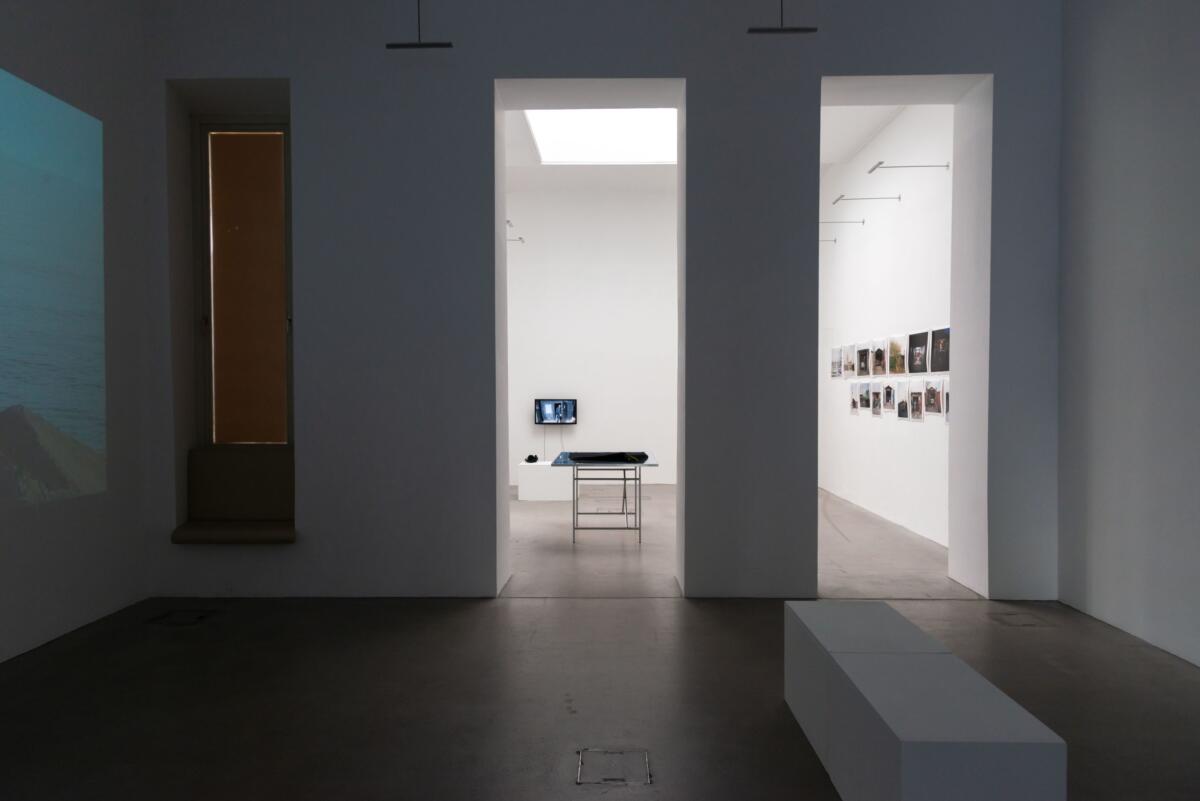 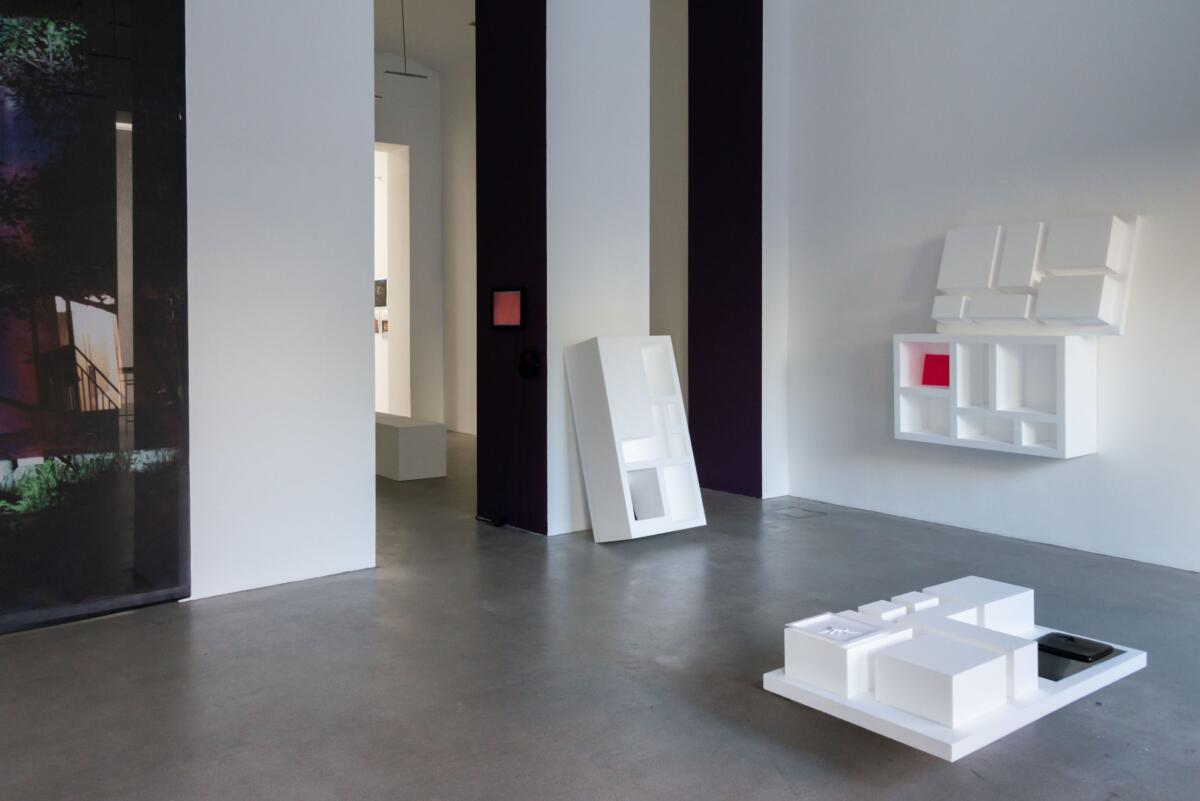 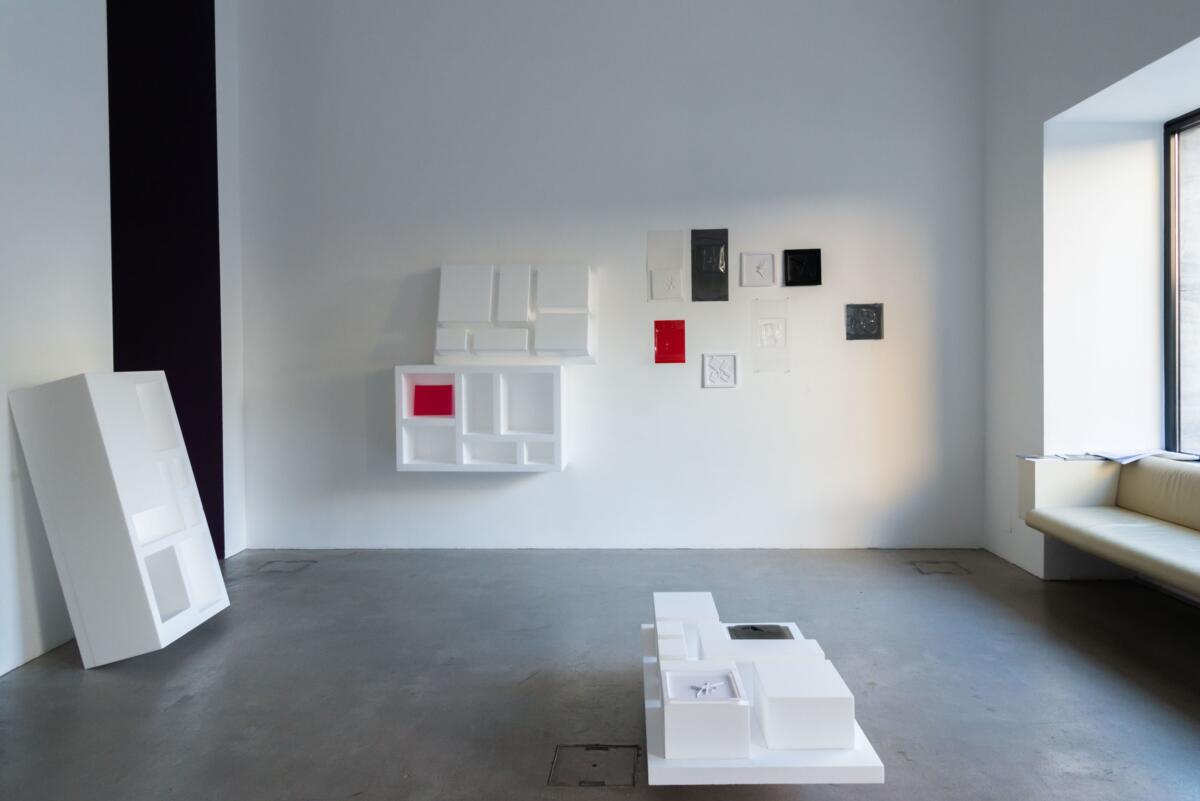 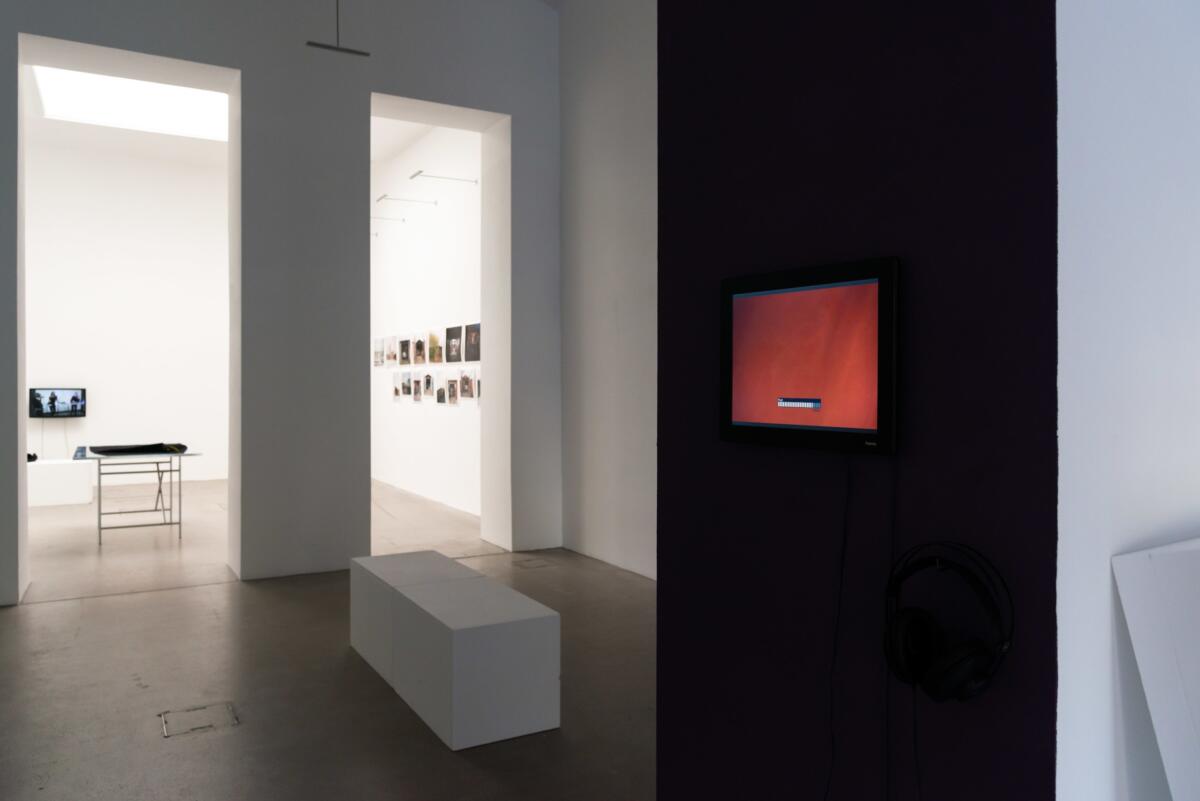 The title of the exhibition suggests how the notion of an artistic and social shape is preserved, deformed or erased. In the philosophical articulations of Catherine Malabou[1], plasticity, as a material quality, refers to the ability of a subject to take and give form simultaneously. There are different meanings of this concept – from figuration in plastic arts to histology, where plasticity refers to the ability of tissues to regenerate after injury, to explosive materials composed of a polymeric (plastic or elastic) binder. Putting together those meanings of plasticity contrary to flexibility, Malabou develops a concept of resistance that comes from the physics of materials itself. In the theory of material strength there is the notion of transverse loadings – forces are applied perpendicularly to the longitudinal axis of a configuration. Apprehending the risks of direct translation from physics to social theory, this concept could be translated into the notion of transversality, which dislocates the spatial composition beyond verticality and horizontality. According to the philosopher Gerald Raunig, “transversals are not at all intended to be connections between multiple centres or points, but rather lines that do not necessarily even cross, lines of flight, ruptures, which continuously elude the systems of points and their coordinates”[2].

In this case, attempts to shift the linear and hierarchical models of time and space that are proliferating in various self-organised communities in Ukraine nourish transversal models of resistance, lines of withdrawals, and ruptures. In his film Landslide (2016, 28 min.) Oleksiy Radynski documents a community of artists and activists who have occupied a small piece of land between garages and landslide in the centre of Kyiv in order to adopt it for various cultural activities, community-building and recreation. The space belongs to artists, secretive graffiti crews, underground hip-hop performers, and the LGBTQ+ avant-garde fashion  theatre “Orchid” that migrated from Luhansk to Kyiv because of the war initiated by russia in 2014. Contrary to the surveilled and privatised cultural spaces to be found in Kyiv, the protagonists create a Temporary Autonomous Zone through the occupation of cracks and fractures in the official urban planning. Between garages and weed-grown wasteland, and in a DIY manner, a group of architects and cultural workers constructs a UFO-like platform as a performative gesture of reclaiming space and as an act of commonning.

Unlike the occupied no-man piece of land, Anna Sorokovaya & Taras Kovach tell the (hi)story of a small scale institution known as “Soshenko 33” Art Studios that emerged from  the creative workshops for postgraduate education of the National Academy of Fine Arts in Kуіv in 1949. Even though officially affiliated with the Art Academy, this cultural space has  always been a space of (in)visibility, autonomy and creative freedom. Unlike the spaces that are sporadically appropriated from the avid real estate market, “Soshenko 33” was carefully looked after by groups of artists and activists throughout decades. The art studios have faced the threat of being evicted and destroyed because of half-criminal urban densification. At the end, the building was saved because of the organised activities of artists and local residents that changed the strategy from utmost secrecy to massive public campaign by elaborating various ways of self-defence, autonomy and self-organisation. Sorokovaya and Kovach, active participants in the life of the community and “Soshenko 33”, narrate the story of the space through a series of photographs, archival documents and maps without creating an art-historical linearity. The latest initiative of creating a communal park was paused in the middle of negotiations and architectural planning due to the russian full-scale invasion in February 2022.

As proposed in the title of the video work by Olena Newkryta, Ruins in Reverse (2020, 25 min.) are neither the result of a violent act of destruction, nor spaces of romantic contemplation, but rather an operational model of living and survival in a non-linear time. In her video-essay Newkryta follows the afterlife of an abandoned, standardised residential housing in the south of Ukraine. Desolated in the 1990s in the context of privatisation and misconstruction, the housing block is appropriated by the dwellers who reassemble its materials into new architectural and social forms. Abandoned ideologies of collective living are inscribed into new social life with its promises. The ruin – as the narrator of the film proposes – is not a ruin of socialism, or capitalist privatisation, but rather a generative force that is entangled with life itself.

In a similar way, the photographer and artist Anatoliy Babiychuk is documenting the life of  communities that have emerged in late socialism across the whole territory of the Soviet Union. In the photo series The Garages of Chervonograd (2007-2014, 21 photographs), he depicts garages as self-organised shelters mostly for the male citizens, who create a temporary refuge from their social and highly ideologised public lives. Here, the garage – as a storage, workshop, or maintenance station – has another historical meaning as it generates multiple temporalities and spatialities that were neither necessarily controlled by the state, nor were they automatically spaces of dissent or non-conformism. Derelicts of socialist infrastructures, garages remained sites of sociality in the post-socialist time of economic privatisation and social individuation.

The museums as sites of officially constructed memory are the spaces where the past could not be stabilised – it became turbulent and unsettled. The postsocialist temporality could not be represented in the linear configuration of museum display – the time is disturbed and disrupted. Zoya Laktionova shot her short film Diorama (2018, 12 min.) at the banks of her native Mariupol. The sea, its waves and waters were already contaminated with mines that deform memories and living experiences of the dwellers of the city. The diorama of the local museum with “dead” landscape and stuffed animals as preserved or conserved time-space continuum is counter-narrated with people’s memories of the coastline which became a landscape of violence and dignity in the context of the recent tragic destruction of the city, with thousands dead, seized Azovstal factory and occupied territories since May 2022.

In the installation Recollecting (2022, styrofoam crates and vacuum-formed plastic sheets) Anastasiya Yarovenko works through the experiences of displacement, dispossession and migration. The artist creates several shapes produced out of styrofoam with carved placeholders for material and immaterial memories and objects that temporarily displaced individuals could or could not take with them. A generic packaging material and its usual looks protects more than just items – it embraces hopes, efforts, and feelings of belonging. In a certain way, the cases (that still have “walls”, although in reality these houses may no longer have them) are imprints of transversal loadings – various powers that shape and deform people’s memories, heritage, and affects. As other artworks of Preserving the Shape, those mnemonic devices do not only represent traumatic or joyful collective experience, but contain and open tensions between space and time, linearity and queerness, objectivation and agency, alienation and solidarity.