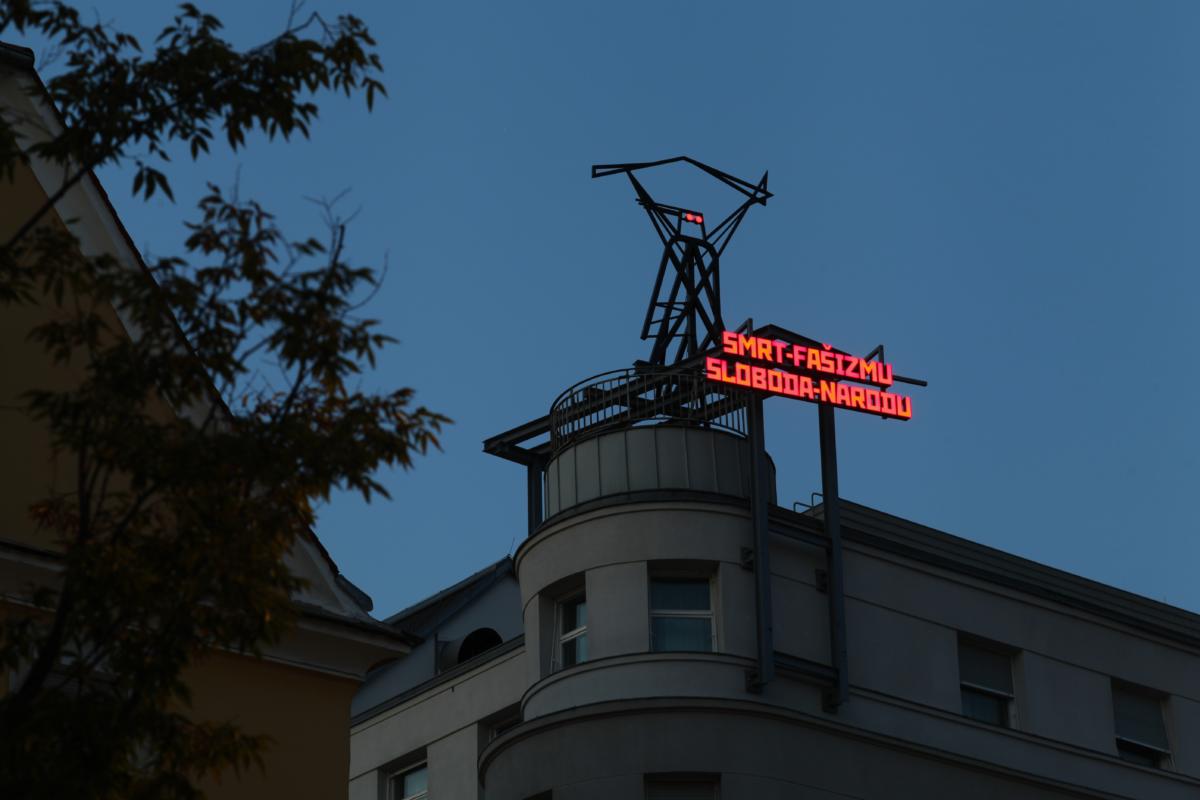 The title proposed by Degot – Volksfronten – is anti-fascistly poetic in its character. SH proposes something more than the Central European-Russian documenta14 supplement. Welcome to Austria.

“Volksfronten” approaches art to politics. We can hear the howls and cries of “Achtung, Achtung” emitted by megaphones in front of the “Russian stairs” leading to the castle hill. Putsch or revolution? – this rhetorical question is posed by artist Roman Osminkin. Perhaps it would be better if it was art? At the end the puppet falls off the stairs. Politics has been possessed by the vulgar street. An inconspicuous but seductive exhibition was installed in the Minorite monastery. Ekaterina Muromtsev’s film about the Soviet Union , a country that does not exist, seem most interesting. Film animation of utopia, for which some still yearn, but which is unattainable. The subject of Volksfronten was seriously treated by curators from the <rotor> CCA, who prepared a collective exhibition, overtly political, yet highly interesting . The title is unforgettable: “Guerilla of Enlightenment. They Will not Bear Hiding Behind Walls and Fences”. However the drawings exhibited by the ZIP Group are of the least seriousness. Political art is surely a joke.

ZIP Group installs a neon sign on the roof of the block of flats. It is a reference to the Yugoslav monuments commemorating a partisan hanged by the Nazis during World War II. Although the artistic idea itself was promising, by no means was its execution, the slogan still evokes strong emotions: “Death to fascism, freedom to the people”. 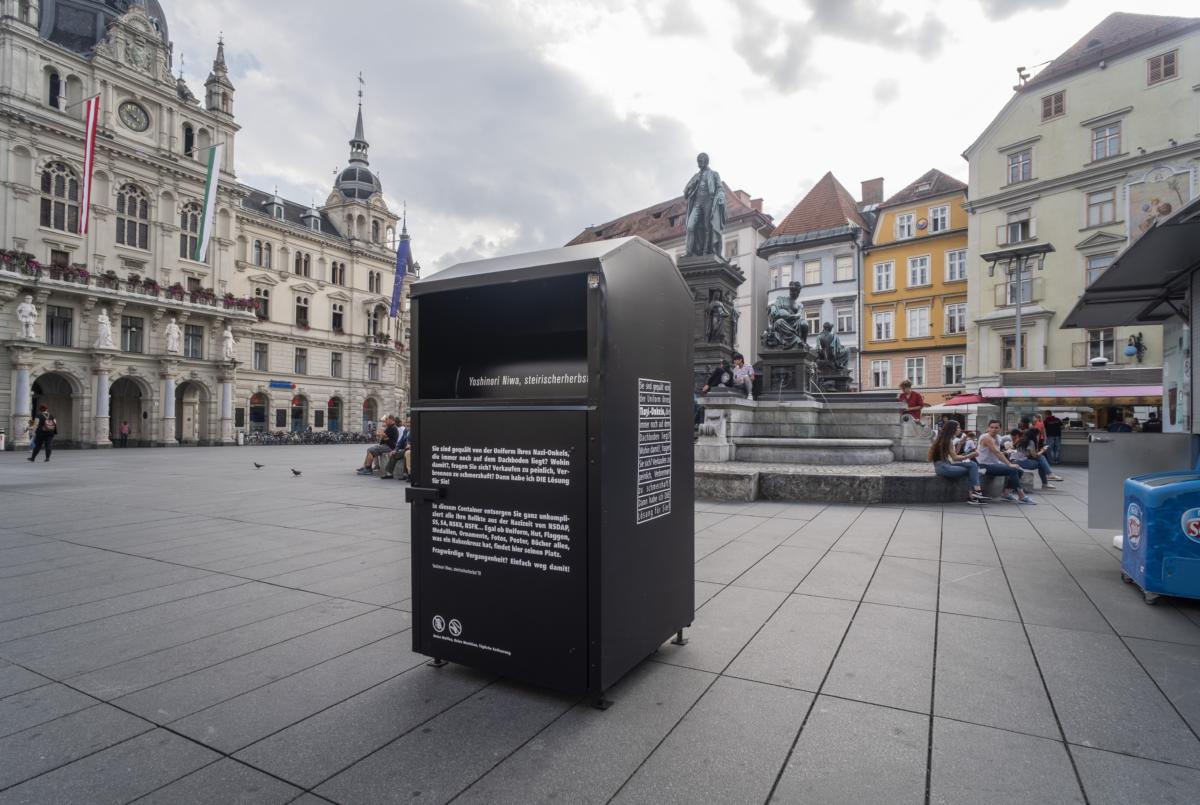 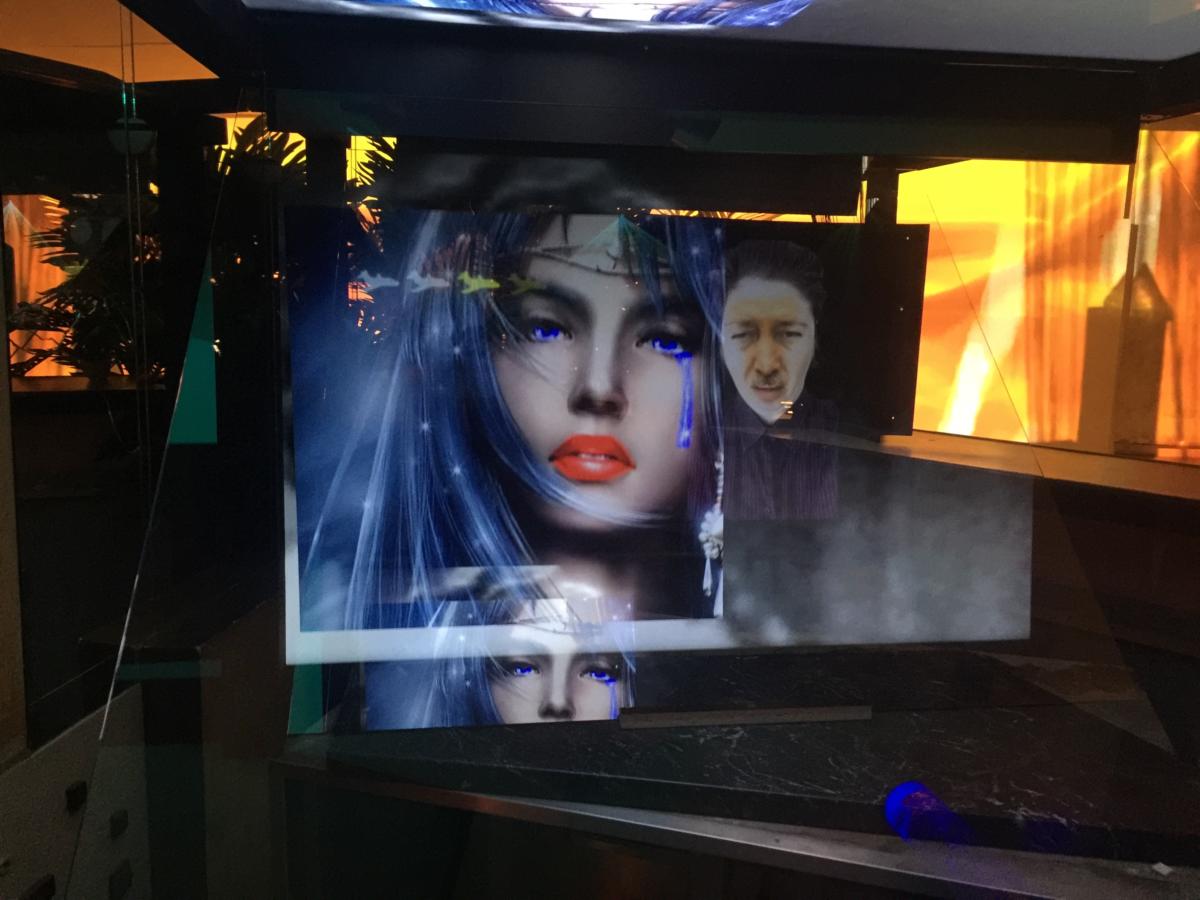 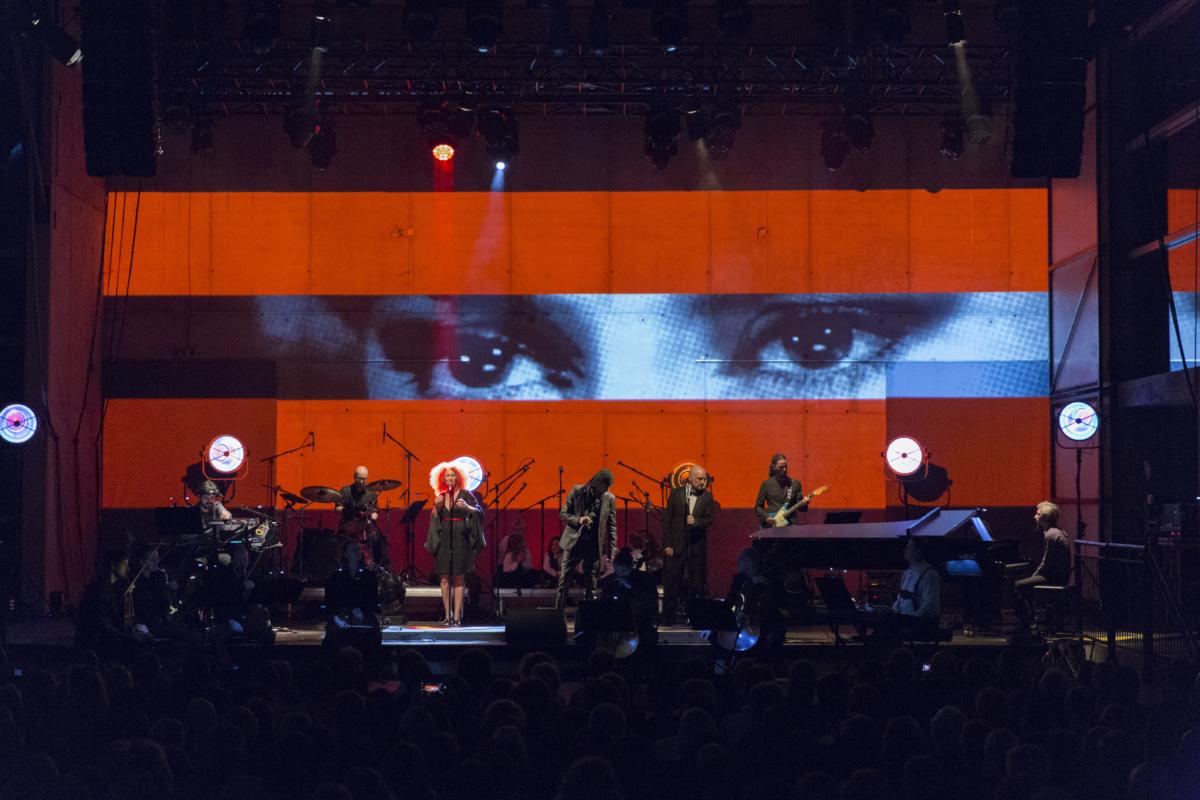 To invite the Slovenian avant-rock band Laibach to Styria is just as obvious as risky. Gentlemen are at retirement age, but they can do the show. The concert “Sound of Music” is a mix of Austro-kitsch and North Korean totalitarianism. One must admit that Laibach is fabulously devastating its audience every time.

Yoshinori Niwa is a Japanese who wants to carry out the denazification of the Austrians 75 years after the war. To do this, he place a black-painted container for used clothes at Hauptplatz. Text written in Schwabacher is supposed to encourage viewers to throw into the container souvenirs inherited from their Nazis’ grandparents. Who knows, perhaps much more Nazi souvenirs could be found in Japan ? 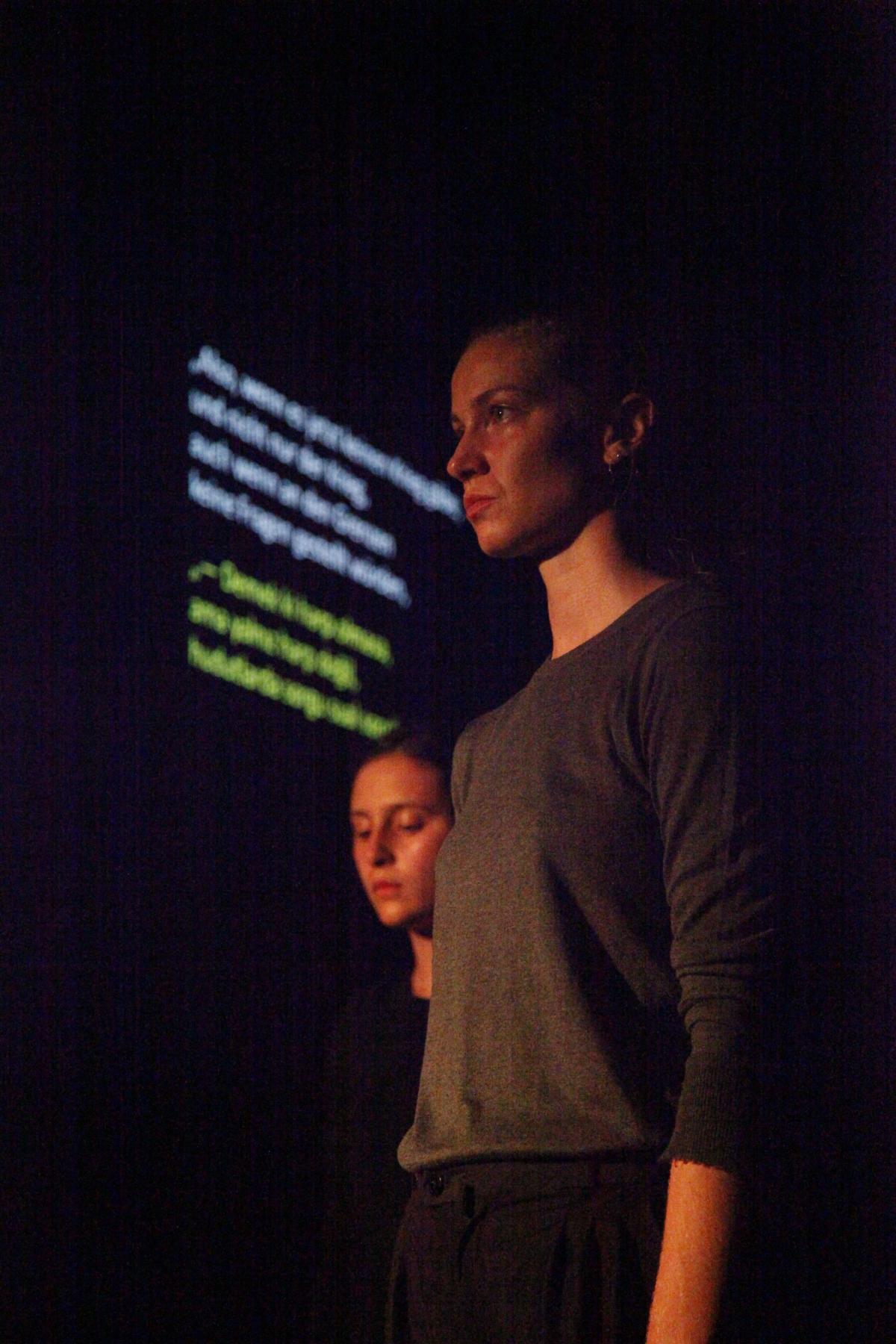 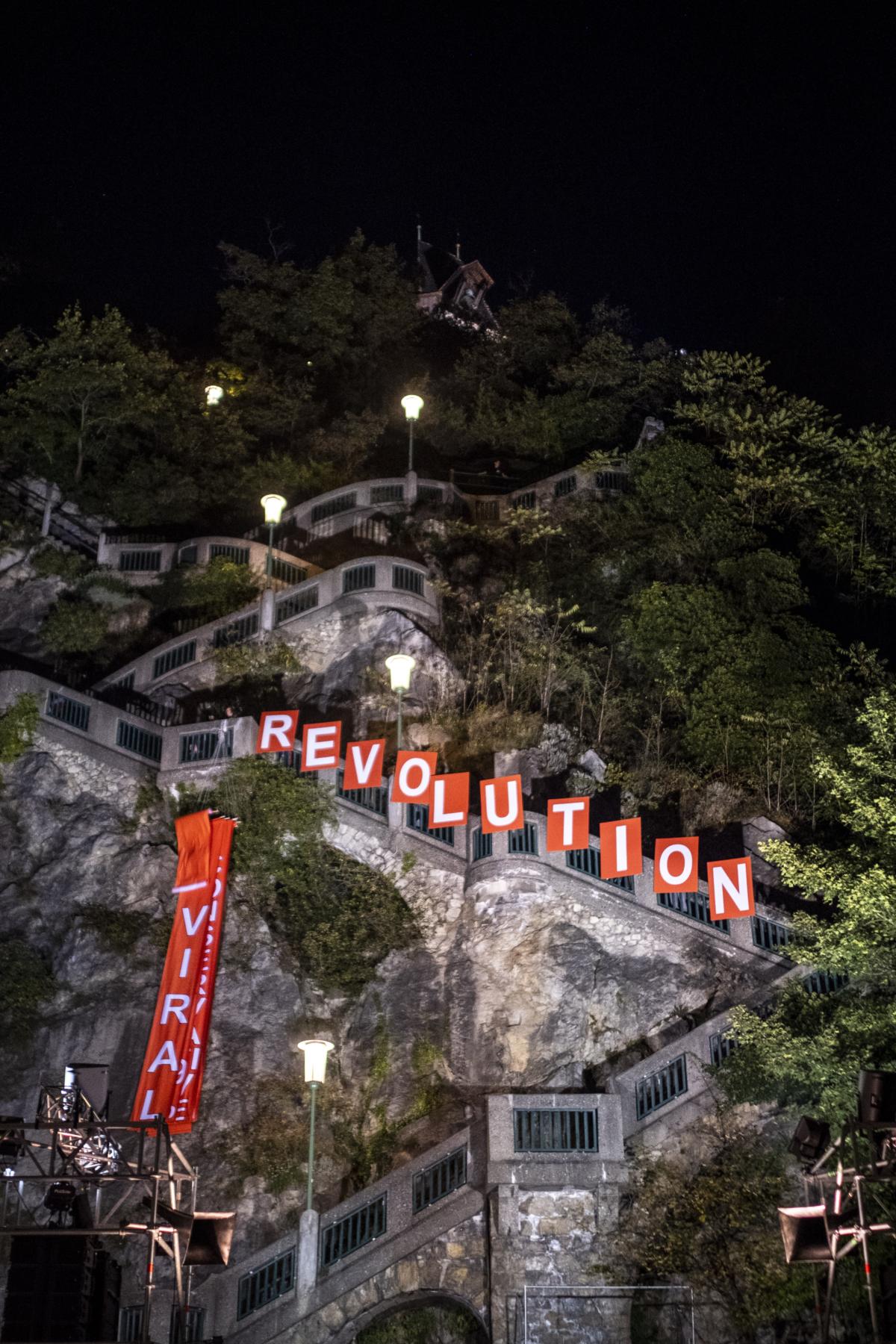 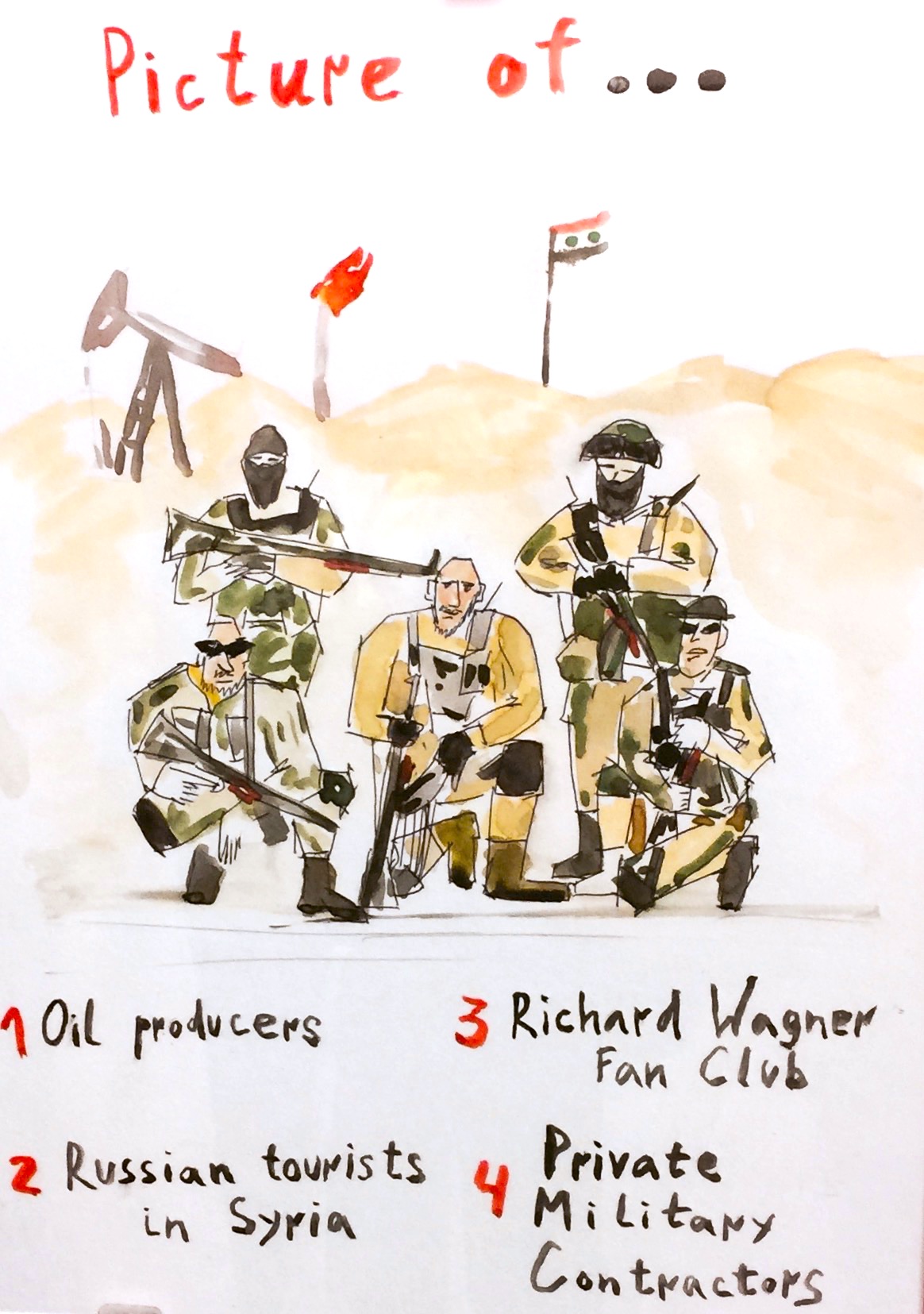 Ivan Vyrypaev is an acclaimed Russian director who lives in Warsaw. Despite being famous for “The Iran Conference” he got spanked by critics. Degot, however, invited him to Graz. The conference organized in the University Hall was controversial and politically ambiguous. This time there was no standing ovation too.

During any ambitious artistic event the presence of young people representing the slo-mo aestetics is essential. Michale Vandevelde’s choreography was accompanied by Turkish poetry, a beautiful, traumatic, slightly anti-German and hippie antiwar piece. It’s dark and stuffy, emotions are authentic. War is bad, peace is good, and art is contemporary.Funda Gul Ozcan turns an abandoned Turkish bar into a site-specific installation full of screens, mirrors and colored lights. Mix of clips and mainstream music is complemented by a musty stench. If you get nauseous, you can go out into the street and eat a kebab. Then you can walk further around Graz thinking about Erdogan and Gulen, about Turkey in search of other installations on the city map. 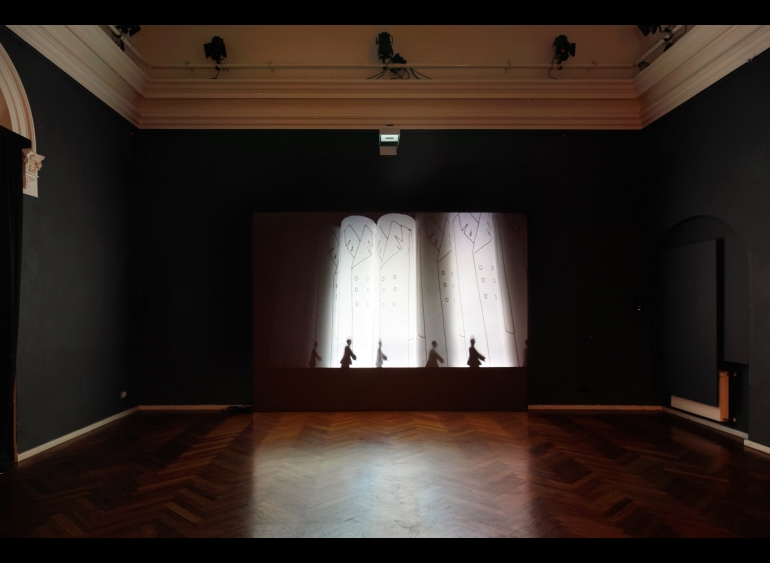 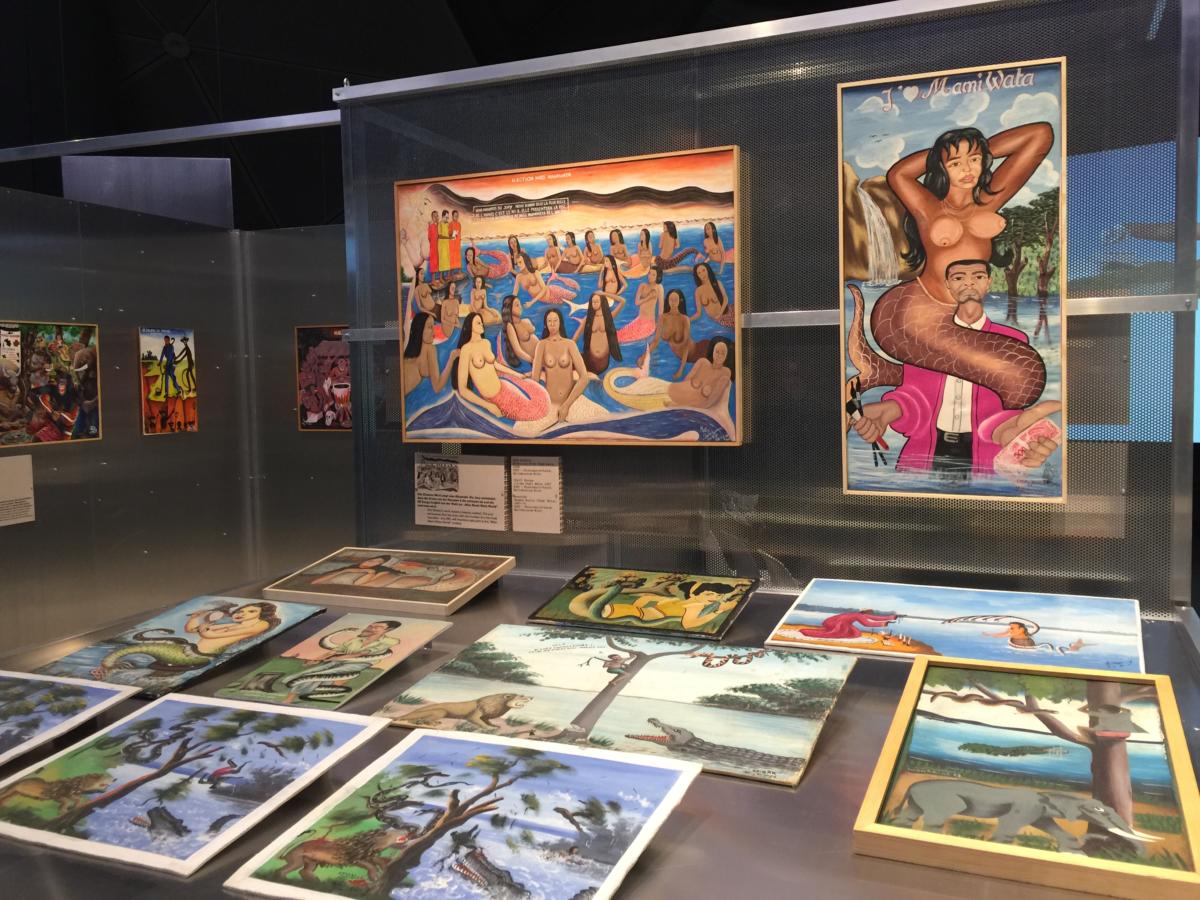 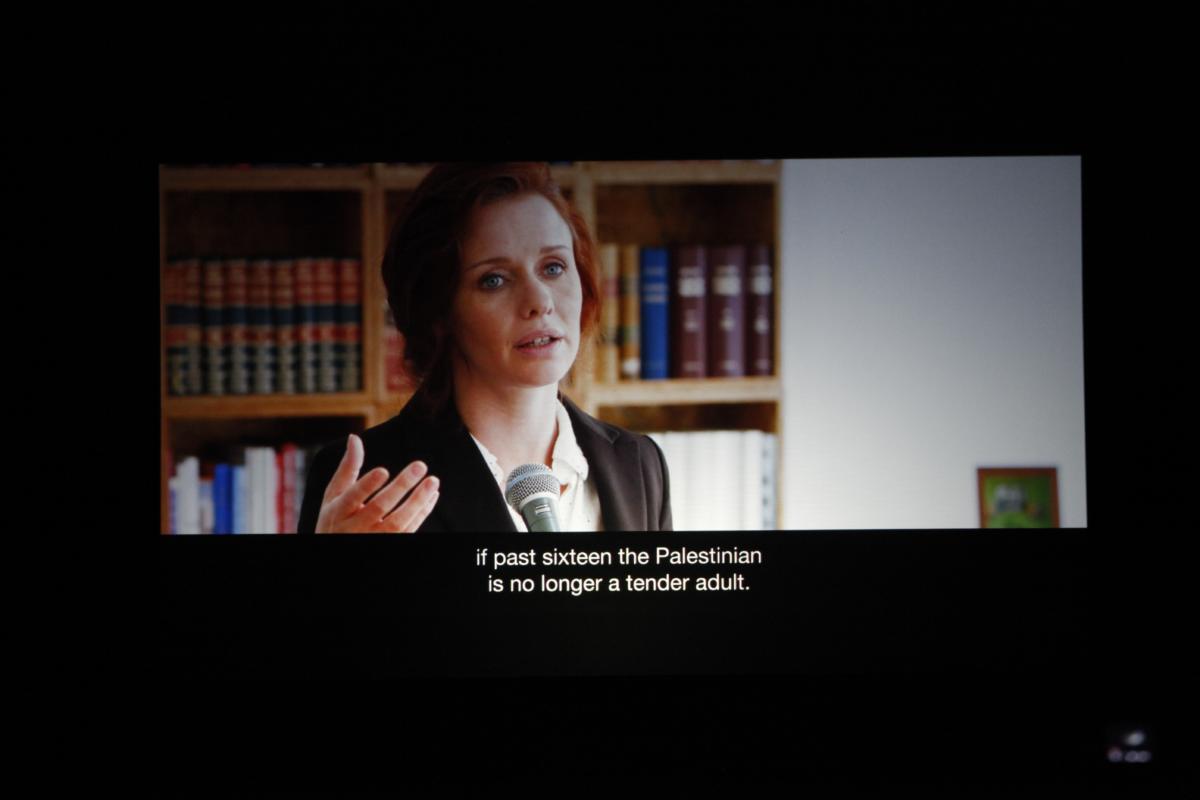 As an accompanying event, Kunsthaus Graz presents an exhibition of comic painting that tells the story of the Congo. Abundant buttocks and breasts of women, dominant men, ubiquitous atavistic violence and hetero sex, accompanied by animistic witchcraft in the jungle. The bomb of political incorrectness is disarmed by the fact that it is done to the natives by themselves. Meanwhile, the viewer wonders what would happen if Volksfronten was transferred to Africa?