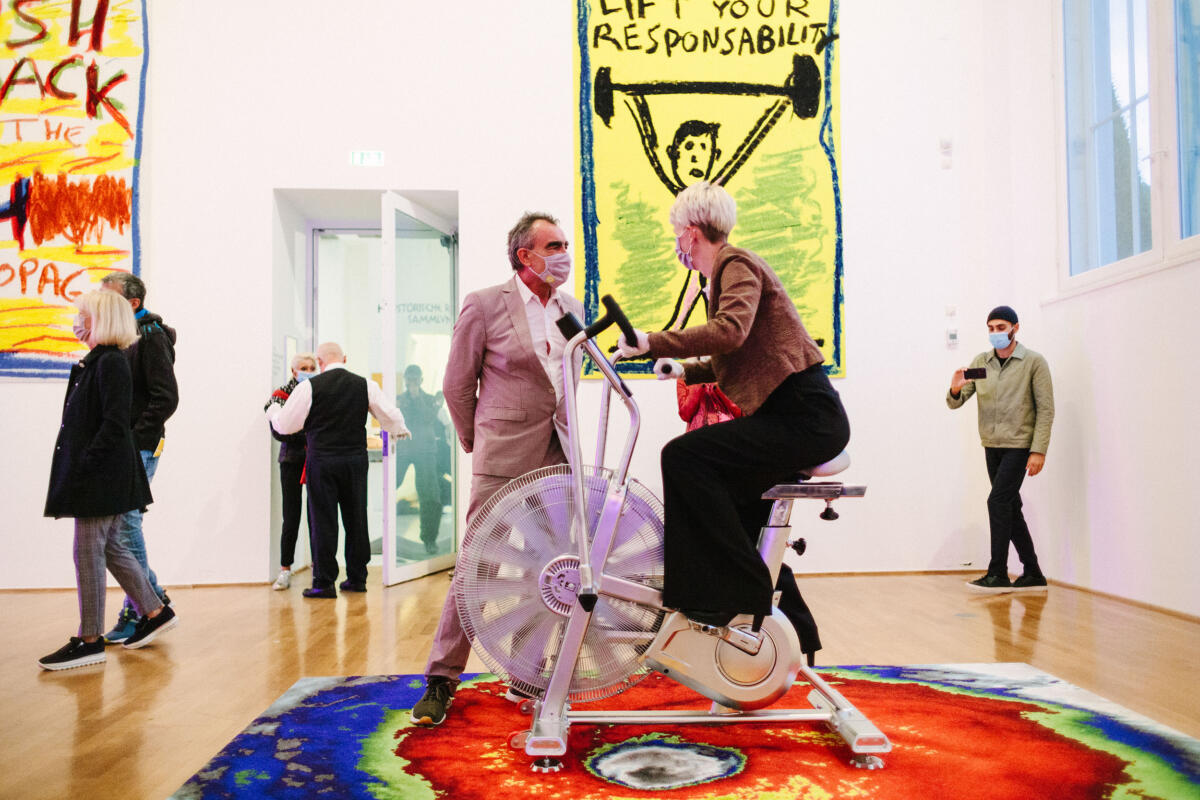 Leading a group of joggers through city streets or acting as a personal trainer is not something one typically does in a museum, except maybe if you know the French-born artist Thierry Geoffroy.

Entitled Strengthening the Awareness Muscle, Geoffroy’s latest exhibition at Villa Stuck in Munich is the sum total of decades long work at the intersection of art and politics. But this isn’t your stuffy post-woke archival show or didactic panel presentation on some nouveau institutional critique.

Instead, the exhibition boldly goes where few artists have gone before: the gym. Installed on the main floor of Villa Stuck are several weight lifting machines surrounded by large-scale prints declaring art’s inability to come to terms with our current political crises. One of the prints, “Push back the propaganda”, another “the moment for change was now,” positions the viewer and asks them to participate in debates around urgent topics like climate change, xenophobia, wars, hypocrisy and apathy. 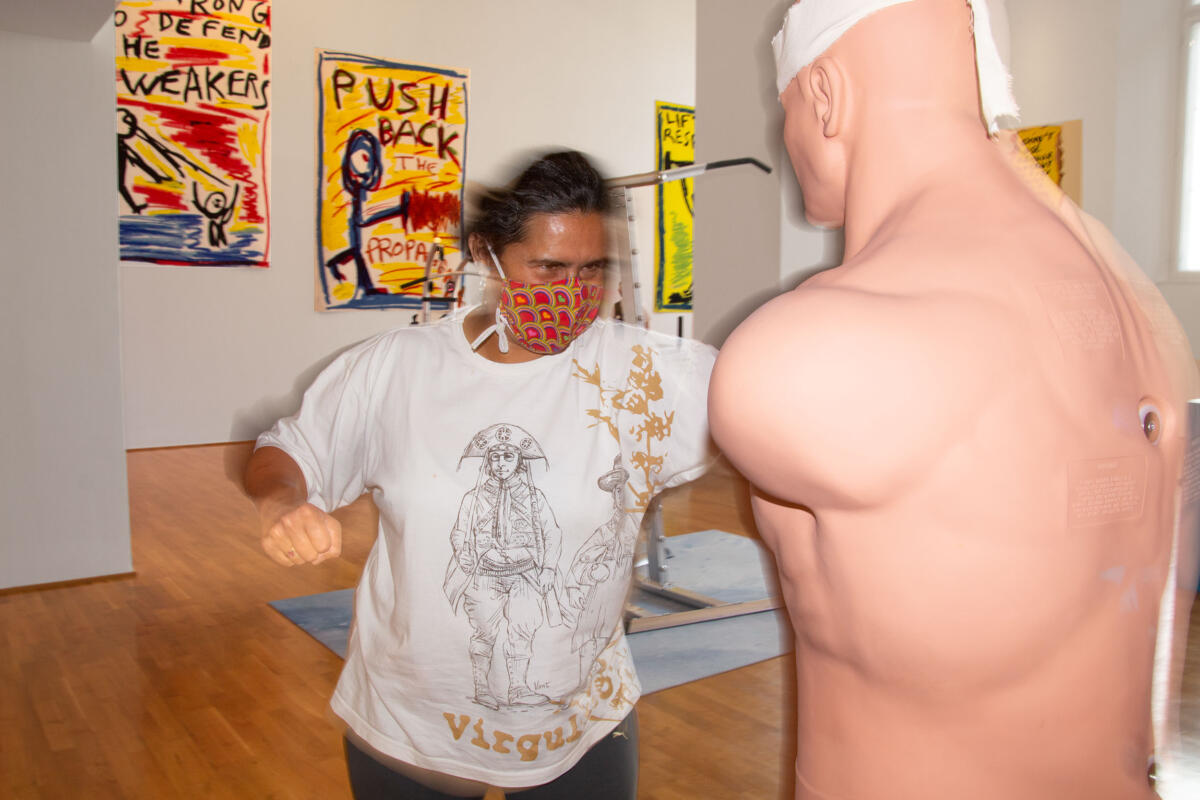 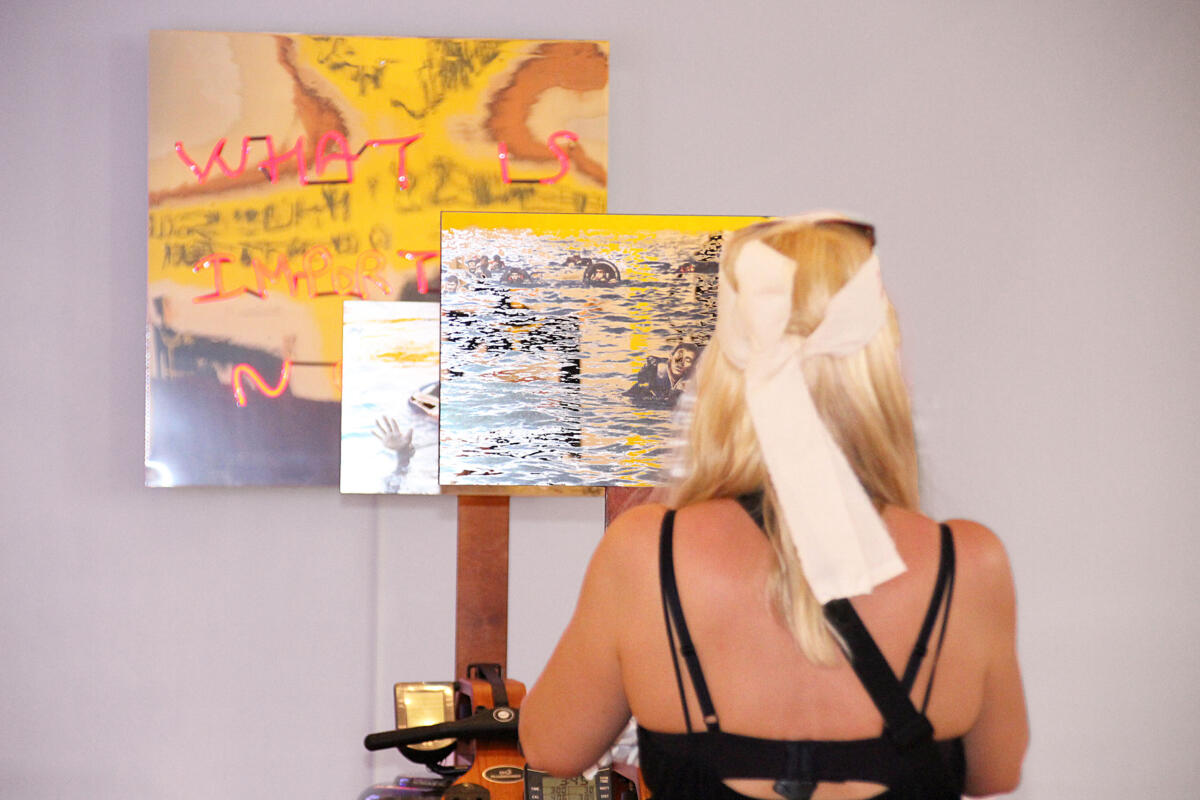 In assuming the role of a personal trainer, Geoffroy greets visitors with a mixture of enthusiasm and critique. “Are you ready to train the awareness muscle? Did you read the news today? What’s happening in Yemen? Do you feel complicit? Do you have power?”

Geoffroy’s rapid fire questions feel like an interrogation, positioning visitors to reflect on everything from war to climate change to the role of museums and the media.

The questions come as visitors are asked to lift weights or perform some other physical activity in the museum. Manifesting in sweaty mixture of performative panache led by an art impresario whose career has involved sometimes provocative, sometimes strange, but always entertaining forms of artistic activism.

Encompassing all three floors of Villa Stuck, the exhibition questions the implicit connection between art and politics. Known by some as the “Biennalist”, many art literati will recognize Geoffroy from his interventions in some of the world’s foremost art biennales and events. From Venice to Berlin to Kassel to Kochi and beyond, Geoffroy’s interventions have made him somewhat of an art parasite, agitating superstar curators and artists the world over with performative critique and deadpan seriousness many find difficult to stomach. Often hated, but never imitated, Geoffroy’s actions have generated him considerable underground influence over the years, the most well known being his Emergency Room format that was toured internationally and shown at P.S. 1 Contemporary Art Center in New York City in 2017. 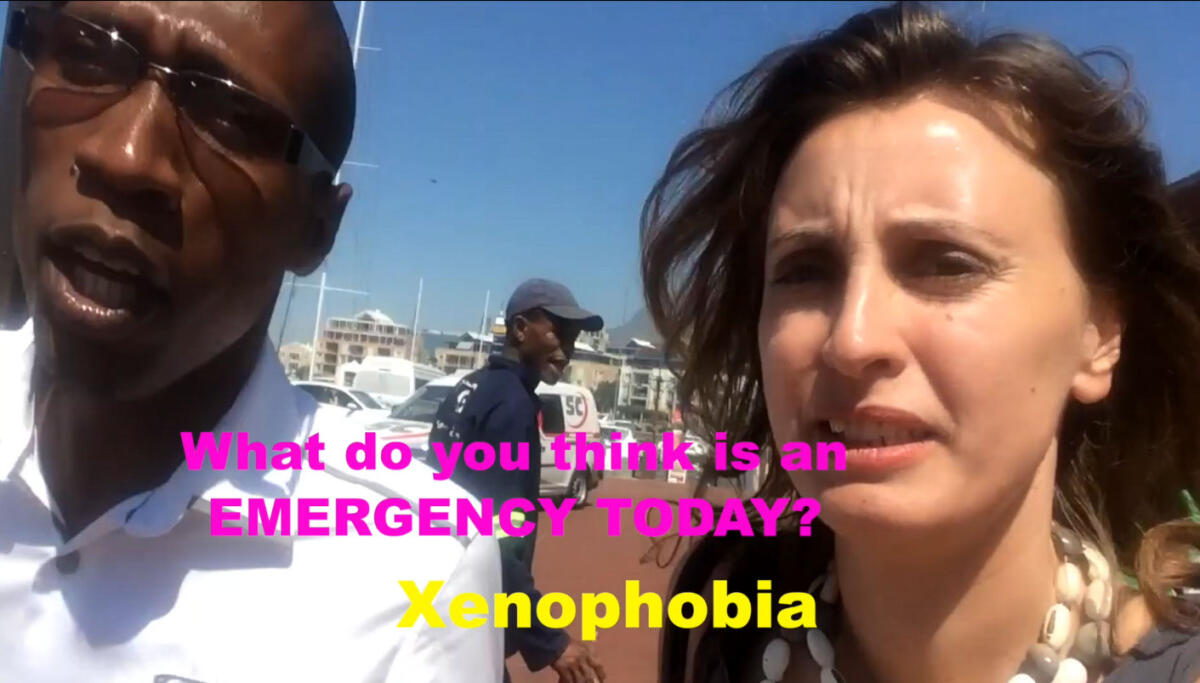 Full disclosure: I’ve known Geoffroy for 7 years, having first met him in 2013 when we were both involved in the Maldives National Pavilion at the Venice Biennale. There, Geoffroy built on his Emergency Room format and installed several tents on the main floor of the gallery overlain with spray painted text asking visitors to reflect on rising sea levels and climate change (the theme of the pavilion).

I’ve often likened his work to the famed conceptualist Ian Wilson, who died earlier this year but left a considerable mark on the art world by turning viewers’ attention away from aesthetics, placing the emphasis instead on ideas and language. For more than 50 years, Wilson staged what he termed “Discussions” that consisted of events in which ideas about art-making and knowledge were communicated solely by oral means. In a way, I’ve always seen Geoffroy not as a Wilson prototype per se, but more as a distant cousin, both interested in how museums and art formats can spark wider social debates, albeit both using distinctly different formats.

Geoffroy’s work, conversely, generally involve many participants that are designed to investigate social psychology (e.g., conflicts, collaboration). The exhibition in Munich – one of his largest and most comprehensive to date – questions established art structures and thus contributes to wider social and political debates through participatory actions staged live on location, but in contrast to Wilson (who famously rejected all forms of documentation), Geoffroy’s work places an emphasis on media proliferation. The work is only activated once it has been shared and replicated. Visitors to Geoffroy’s absurdist political theatre in Munich will therefore likely find it difficult to delineate where the border between art and life begins. 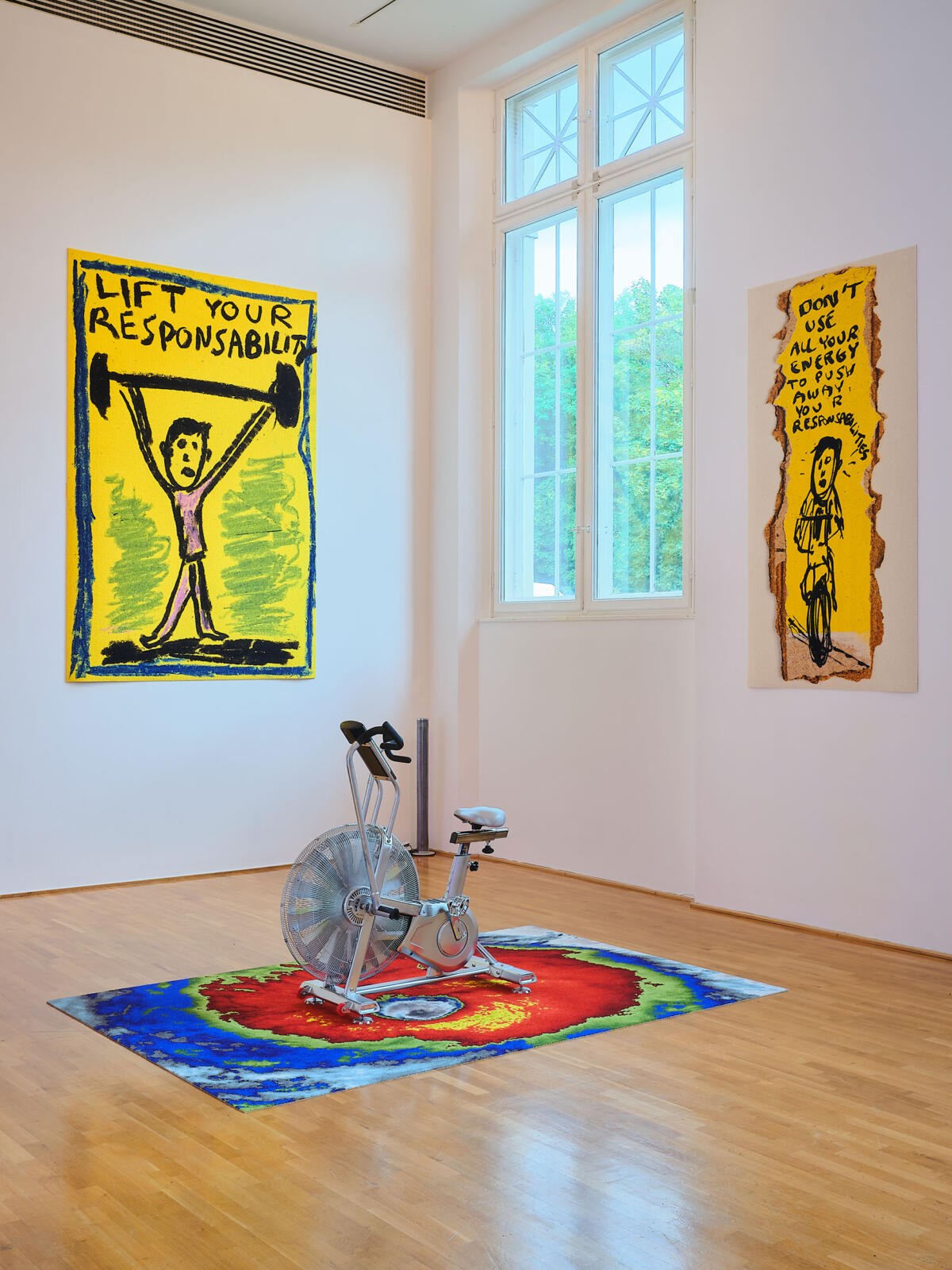 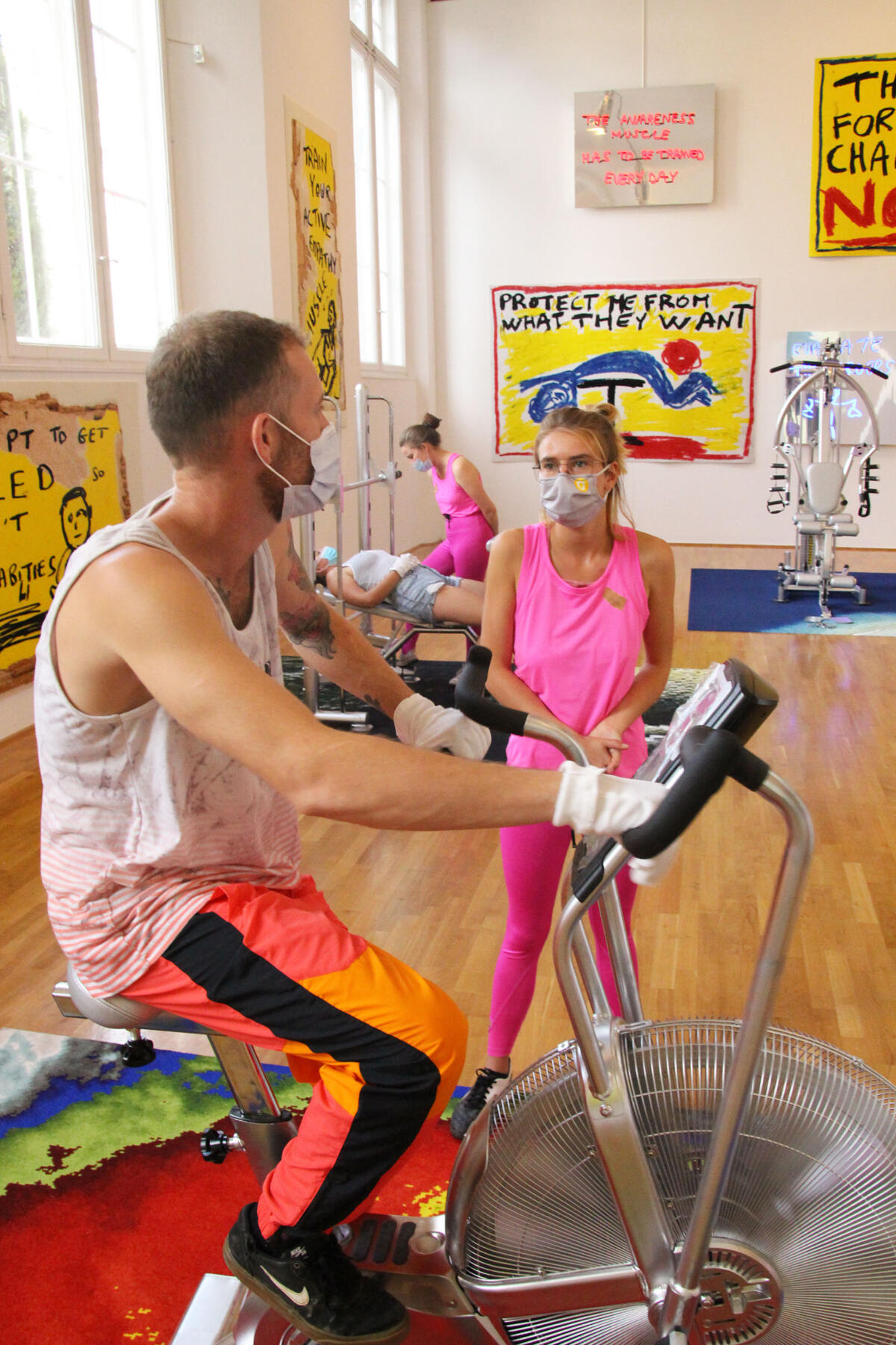 On the second floor, Geoffroy has installed what he calls Gallery Ultracontemporaine, an installation composed of newspaper clippings he sources daily overlain with the artist’s own commentary and then mounted to cardboard and fastened to the wall. On the day of my visit (August 30, 2020), Geoffroy cut out a Hugo Boss advertisement declaring “Champions Wear Boss,” underneath  he fastened a ace mask glued to the ad with the the statement “Caring People Wear Masks” overlain.

On the third floor of the museum, a circular room is constructed with several dozen television monitors each featuring footage from the artist’s Critical Runs series. The videos are captioned with text and consist of Geoffroy running alongside participants as they discuss and debate issues. Running in one of the videos through the streets of Venice, Geoffroy asks whether the “emergency will replace the contemporary?” The shaky video pans to the participants as they become protagonists in Geoffroy’s ongoing absurdist political theatre. Only here, as always, we become the protagonists. Our comfortable place in the museum is destabilized by the art agitator par excellence.