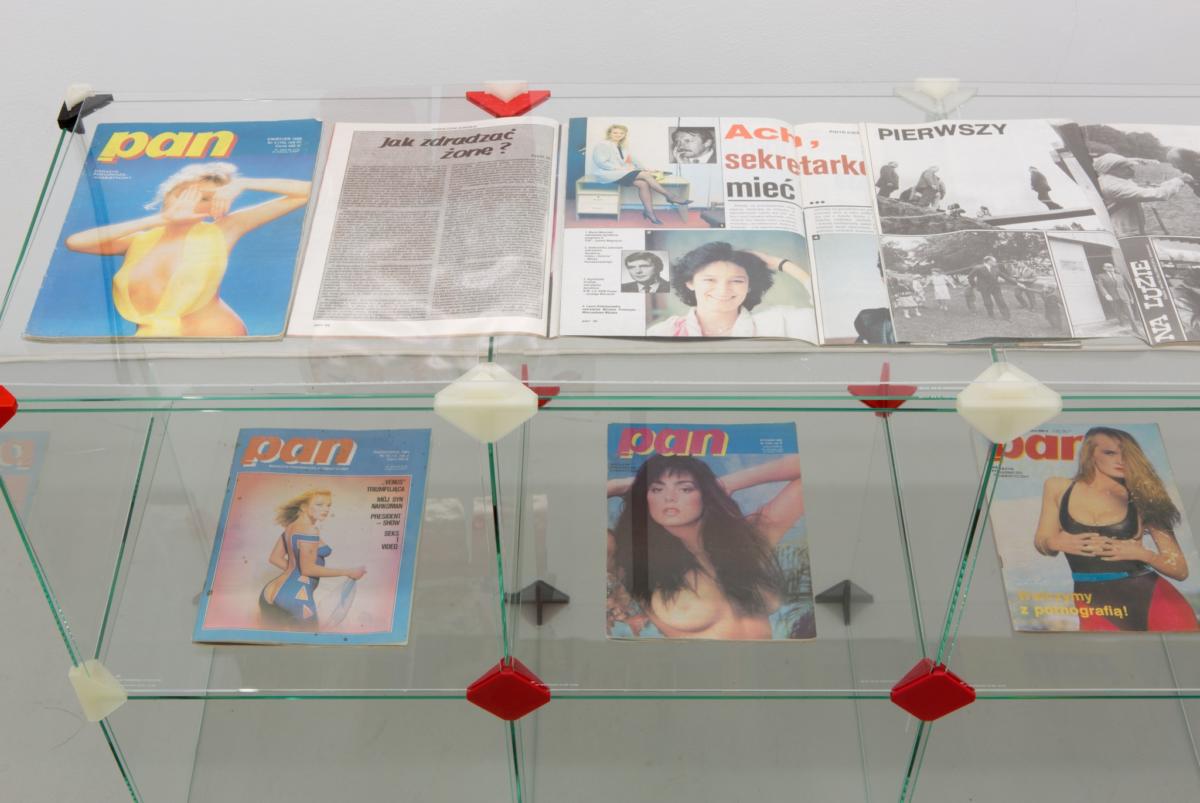 Janek Simon’s exhibition entitled 1985, presented at the kjubh Kunstverein in Cologne, is a continuation of the visual research of the intersection of the political, the economic and the social undertaken by the artist in his previous projects. In this particular exhibition Simon creates the story about the Polish “sweet” 80s preceding the fall of communism and its replacement by the ideology of capitalism. The period of transformation is illustrated by the objects from popular culture of those times, such as life-style magazines, hair dryers, crystals, a Polish version of the Monopoly game, computer technology, posters and an excerpt from the musical Love from the Hit Parade (1985). All of them bring out the esthetics, which as I was born in 1985, I easily recognize. One has to be amiable to these objects, at the same time leave behind the sentiment and irony concerning the reality of makeshift struggle with the chaos which the objects evoke. This is only way how to acknowledge their role of a tool or a vehicle of change.

Simon’s 1985 can be seen as an addition to the initiatives realized in cooperation with Max Cegielski, devoted to Polish transformation and summarized  in two exhibitions The Polish-Indian Shop and Prince Polonia. These exhibitions are connected by arranging the objects into the form of installations based on cubic, mobile modules, which suggest the processuality of artistic-research activity as well as to the susceptibility of the work results to further additions and transformations. However, the story is superior. I assume it would be possible to replace some of the elements of the exhibition by others, only if they maintain a metonymic relationship with the content they are supposed to represent.

Simon’s project fits into this theoretical schemes, emphasizing the tear of the country between the East to which it belongs and the West, to which it aspires.

The exhibition may also be treated as a commentary to the ongoing discussions on the transformation period in Poland, electrified by the publication of Magda Szcześniak Norms of Visibility. Identity in Times of Transformation and Olga Drenda’s Polish Hauntology. Things and People in Times of Transformation. Simon’s project fits into this theoretical schemes, emphasizing the tear of the country between the East to which it belongs and the West, to which it aspires. In addition, it describes the decommunisation as the process of self-colonization, seeing Poland as “a country that colonises itself by gradualy and unofficially replacing the Communist ideology with a capitalistic one.” 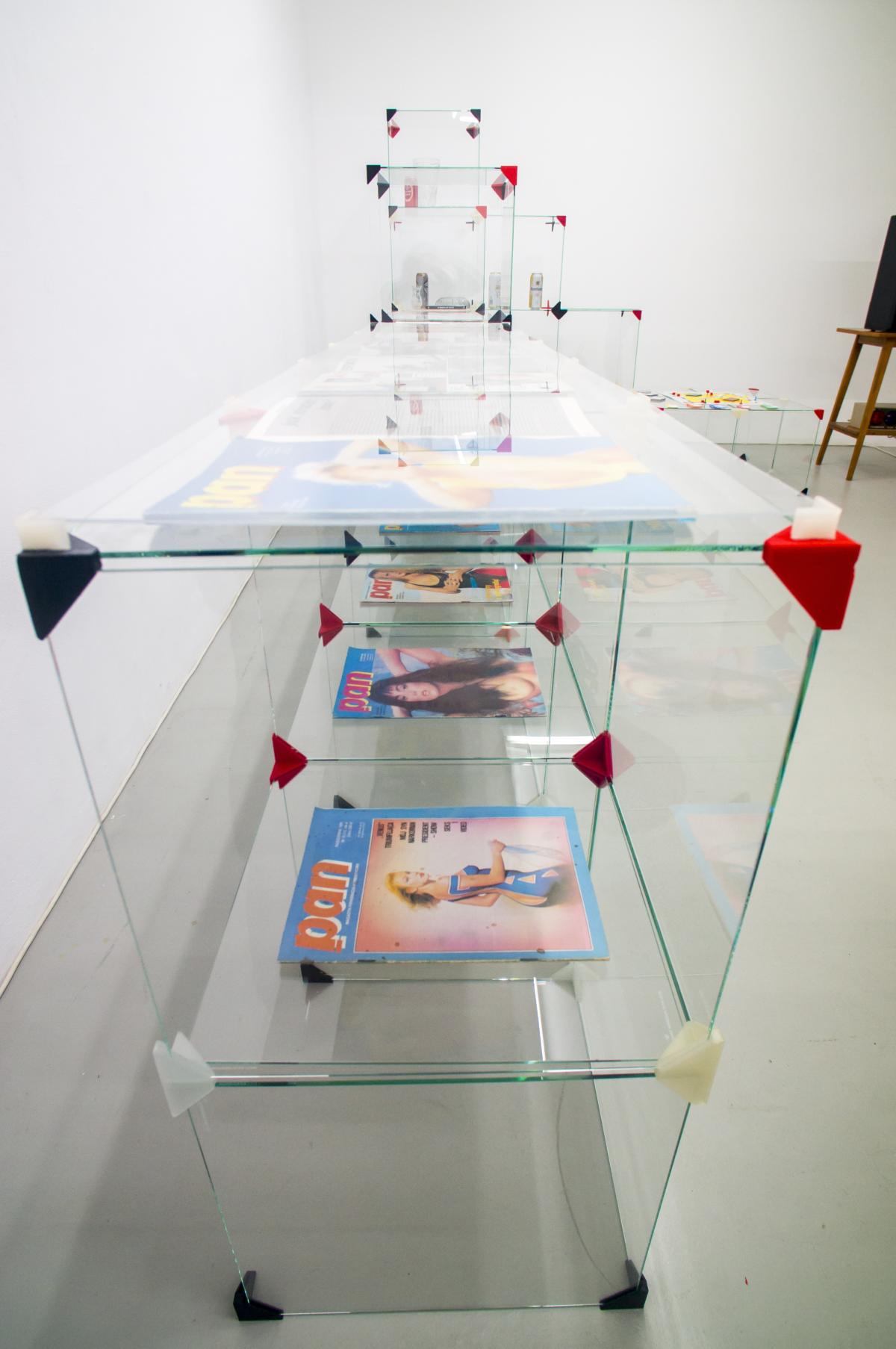 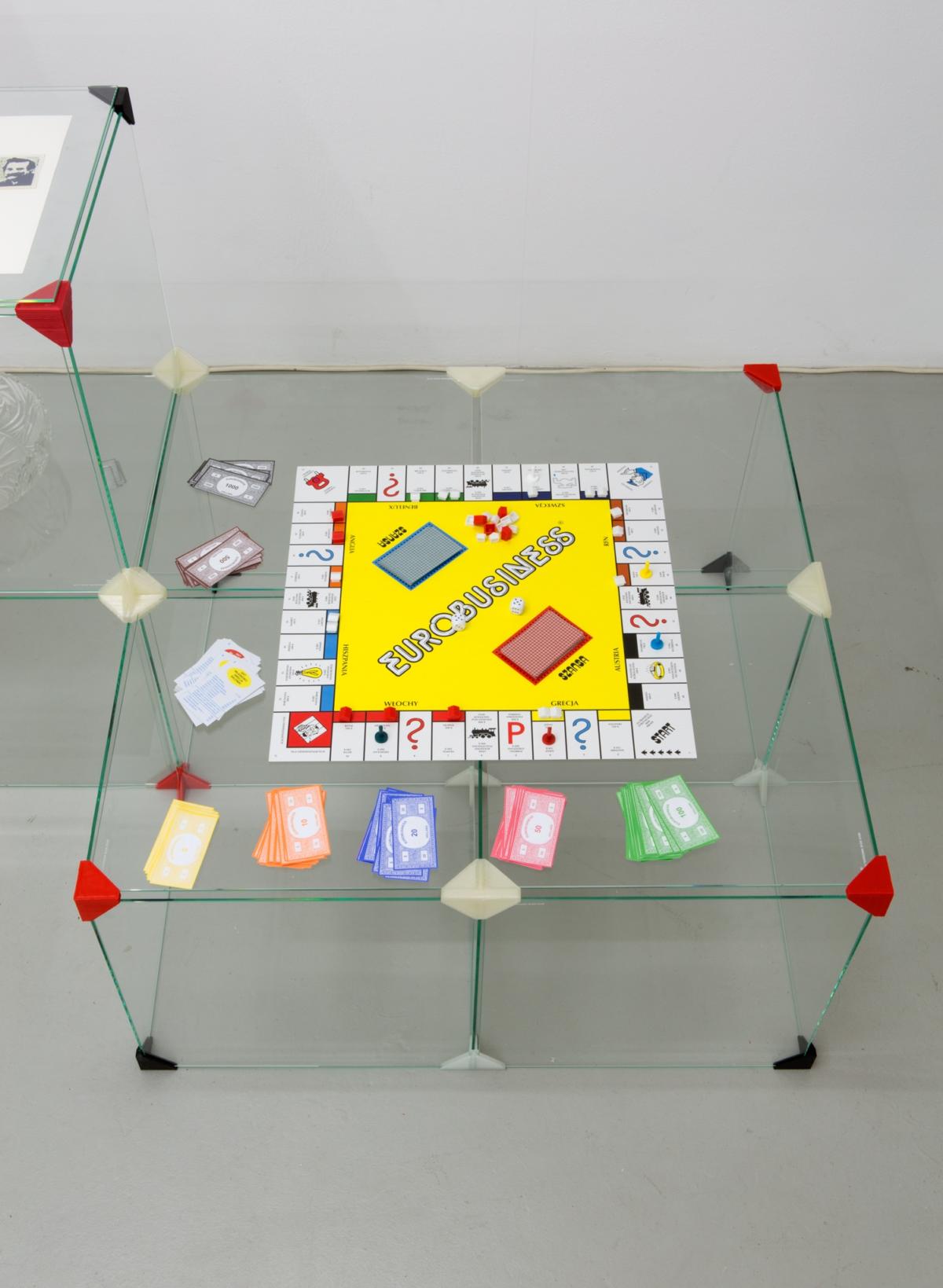 The exhibition based on archival sources of transformation understood as decolonization from one regime and simultaneous colonization into another one, proves that the turning point happened before the 1989. The announcements of capitalism were already and paradoxically present in the realities of the socialist system. For instance, the model of a centrally planned economy resulting in the overproduction of selected goods with the concurrent lack of others, impelled illegal exchange of products, in which Poles had to offer crystals and household appliances. Smugglers signaled the growing consumerism, but also required a great deal of resourcefulness and entrepreneurship, which turned out to be extremely useful competences in the upcoming decade of Polish capitalism. Similar skills, practiced in the sphere of simulation, were provided by the popular game Monopoly dedicated to trade and speculation in the field of real estate. The main focus of the exhibition was the Polish lifestyle erotic magazine Pan, called Polish playboy. Its readers could internalize the content from behind the Iron Curtain fluctuating in between soft pornography, such as technological novelties or style of the unattainable world of Western business. Paradoxically, the magazine was published by RSW Ruch, the official publishing house of the Communist party, delivering one of the main sources of communist party revenue.

The exhibition 1985 was a part of the international research project Perverse Decolonization, uniting researchers, theorists, artists, curators and writers from different regions (Eastern and Western Europe, East Asia, Middle East, USA), under the purpose to rethink the process of decolonization and postcolonial theory. The long-term programme of discussions, workshops and accompanying events led by Ekaterina Degot and David Riff, as well as by Aneta Rostkowska who was responsible for the artistic contribution, had its final symposium on November 16-17 at the Akademie der Kunste der Welt in Cologne. The hypothesis initiating the project and its great value at the same time, was the recognition that the identity policies developed in the decolonization in order to undermine the dominant and oppressive orders were taken over and incorporated into the rhetoric of the growing nationalisms. Paradoxically, they now serve to sustain “white” supremacy that they were supposed to refute. For example, a right-wing ruling party in Poland eagerly uses the selected identity narratives while describing the threats lurking for the Polish identity from the EU, as well as immigrants who may disrupt the country’s monolithic character. At the same time, the nationalists neatly omits these theoretical tools in the area of historical politics and when describing the colonizing position of Poland in the context of relations with Ukraine.

Decolonization cannot succeed if it is based on the structures that enabled its foundation. Decolonization would be equal to decapitalization, which is unimaginable.

Exemplifications of the perverse abuses can be multiplied. The capture of symbols and strategies of emancipation was also well described by Ana Teixeira Pinto, who mentioned the example of aesthetics associated with the leftist artifacts now being (ab)used by the “alt-right” movement, in this particular example via incorporating white suprematism into meme culture. It is also worth to mention the colonial nostalgy or as Paul Gilroy puts it “postcolonial melancholy”, which is obviously evident in Brexit, but surprisingly could be found as well within the movements, whose founding purpose was to defend democratic values. This for instance happened in case of “Umbrella Movement” emerged in Honk Kong with reference to crises of electoral system in 2014. This political association revealed clear resentment towards the inclusion of the Hong Kong within the UK empire. Hong Kong exemplified as well another blind spot of decolonizing processes, which is related to the co-excitance of colonization and capitalism and omnipresence of economic structures developed during colonial expansion. Hence, decolonization cannot succeed if it is based on the structures that enabled its foundation. Decolonization would be equal to decapitalization, which is unimaginable. 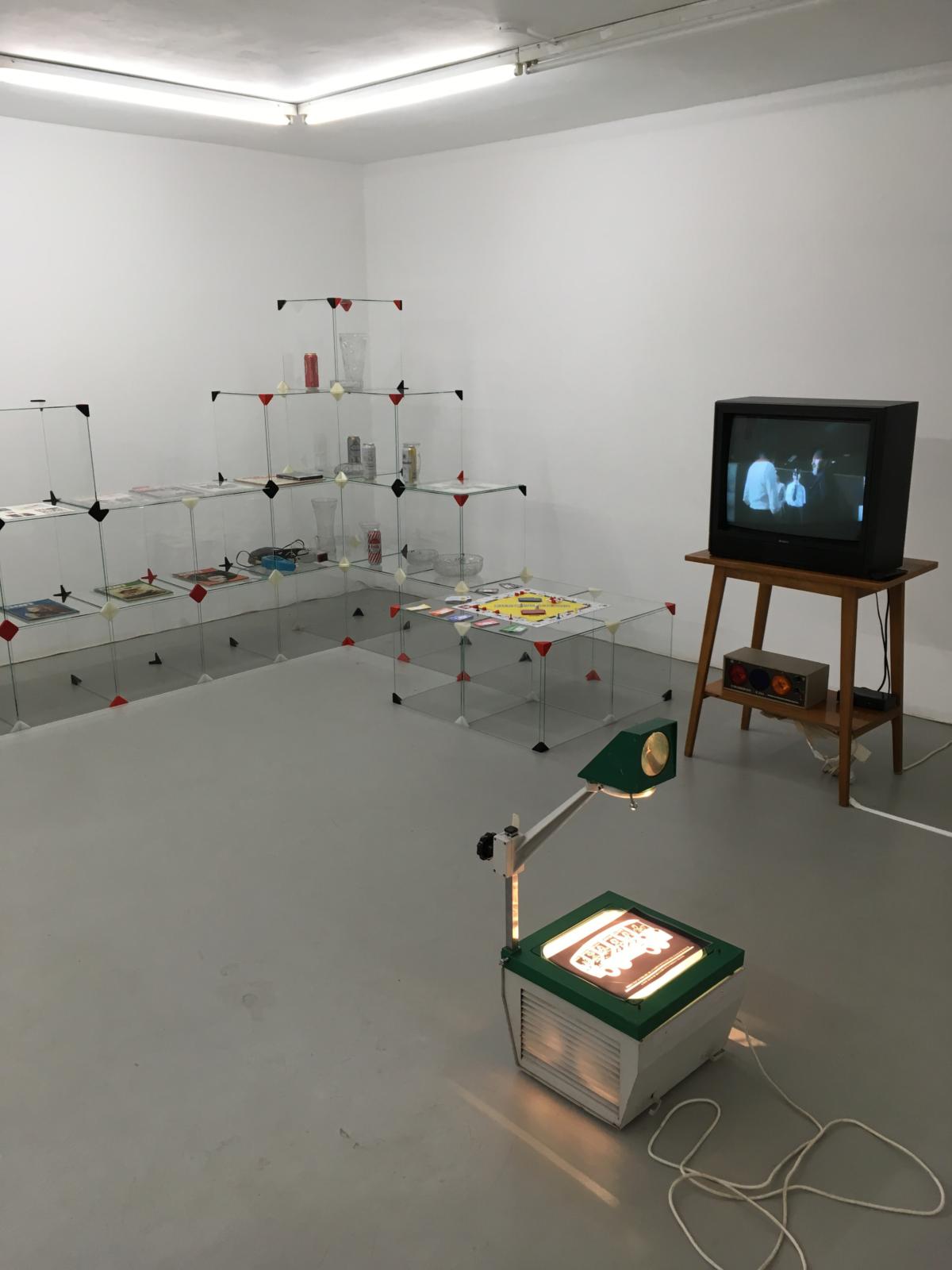 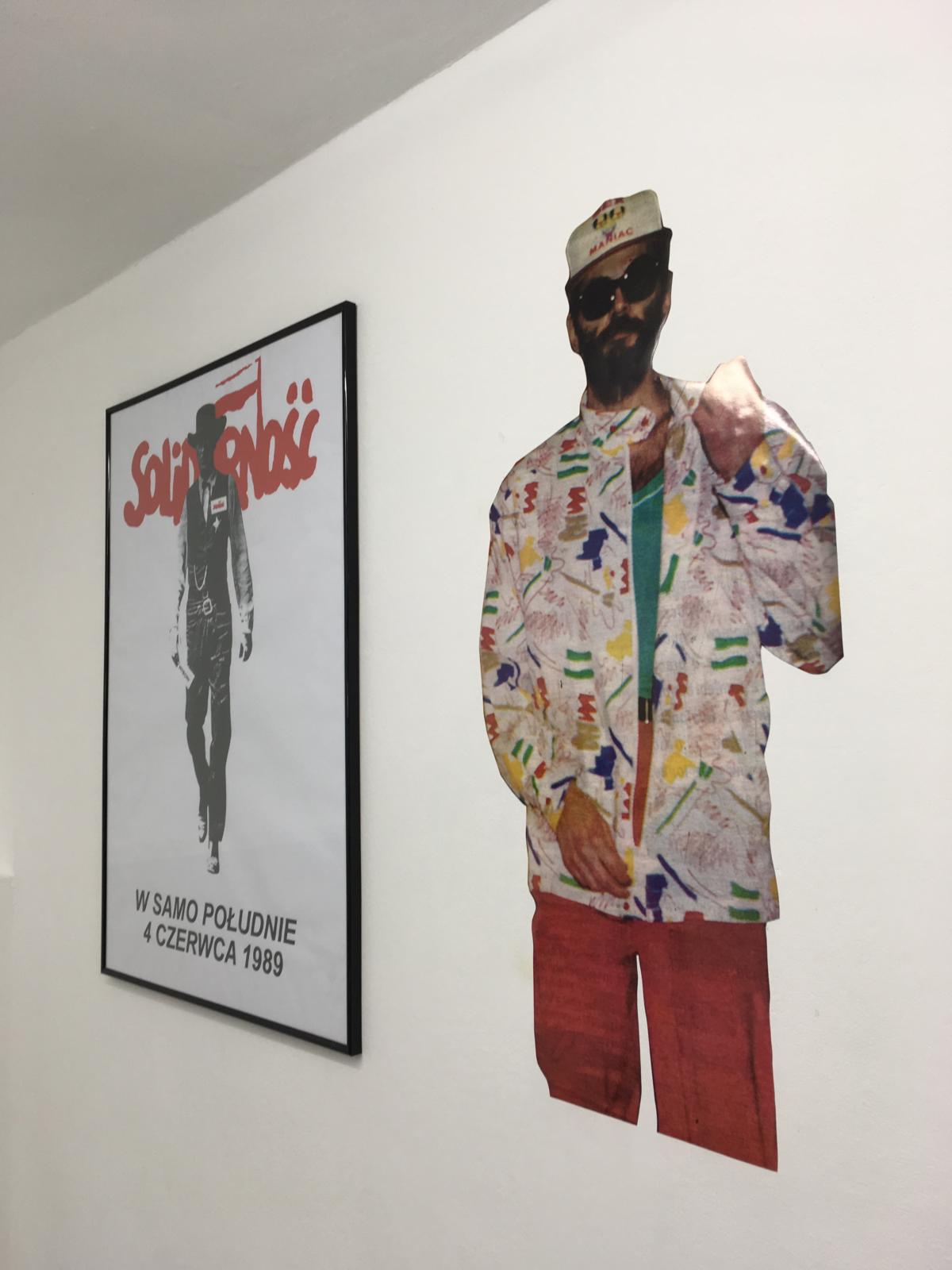 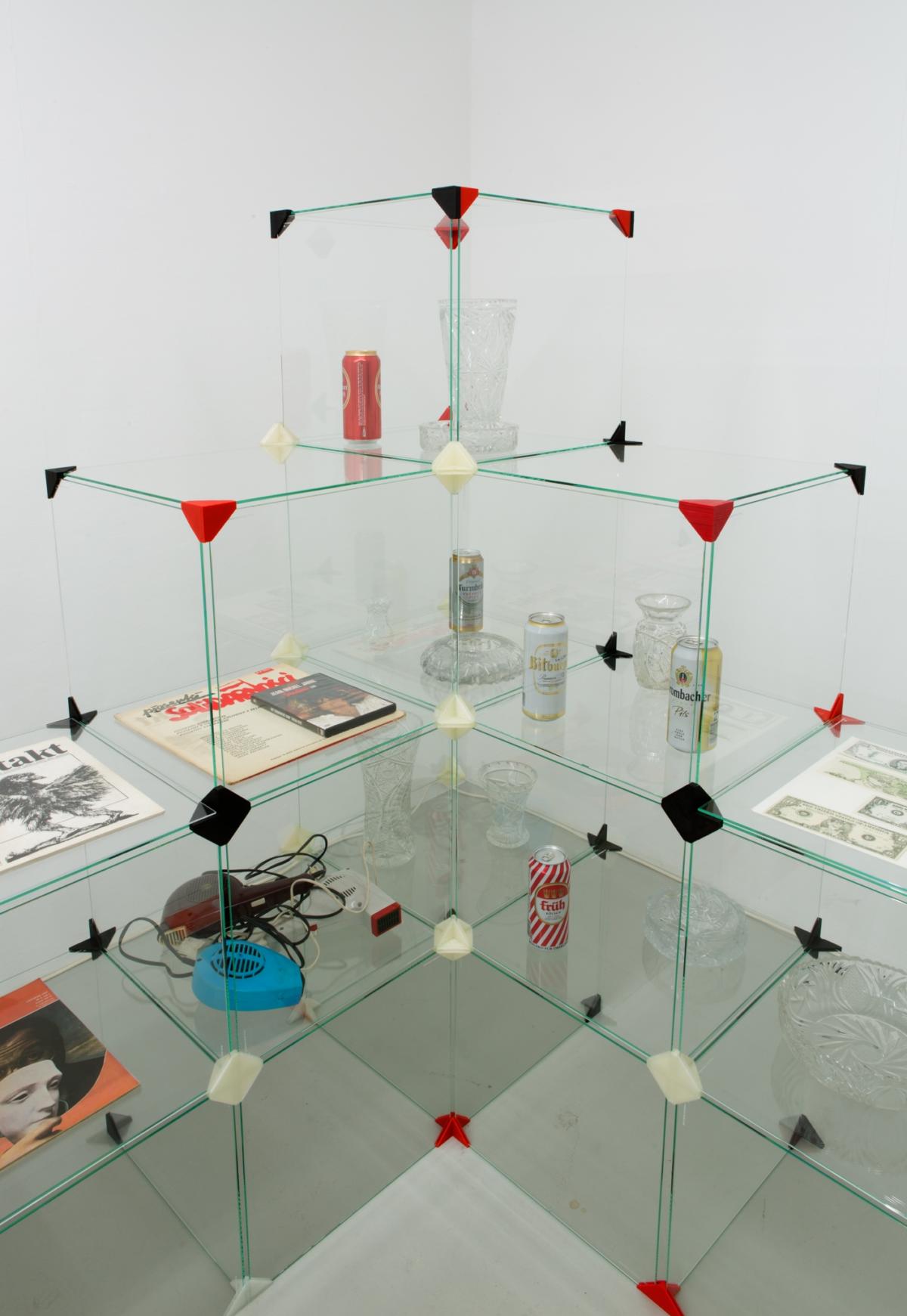 Regarding the assessment of the symposium, it can be summarized as such: the strength of the discussion was coincidently its weakness. Plenty of diverse and intriguing threads were recalled, however, there was not enough time to carefully rethink their outcomes. The two-day programme ended with the statement of one of the participants, who fished out the difficulties he had to receive the entry visa allowing him to join the symposium in Germany. This revealed a significant deficiency among the analyzed cases, omission of the subject of the unequal nature of the discussion about decolonization, which usually take place within those in privileged positions.

The intention of the Perverse Decolonization project was to submit a form of resistance to the growing right-wing movements. The main concept was to find a unifying factor both at the descriptive level and in the dimension of actual experience, as well as – I assume – to empower those marginalized. The proposed idea of universalism was preceded by the prefix “dirty” in order to abstain from its totalizing, synthesizing, and discredited connotations with imperialism. Such “dirty” universalism rather seeks a common reference point connecting various entities, category such as labour, a human activity in the Marxists term. Theoretically, it appears to be an apt and tempting prospect, made possible by the fact that capitalism is embracing the whole world. What is this concept’s use in practice?

The other exhibition accompanying the Perverse Decolonization programme was Saddie Choua’s Today is the shortest day of the year but somehow hanging around with you all day makes it seem like the longest.  The central place in the Richas Digest gallery was occupied by a video-triptych based on archival, founded materials. One of the videos juxtaposed the excerpts from the movie The wonderful horrible life of Leni Riefenstahl by Ray Muller with the images from Nubian village taken by Riefenstahl. The second one was a combination of scenes from two iconic movies The Black Girl (1966) by Ousmane Sembène and 23, quai du Commerce, 1080 Bruxelles (1978) by Chantal Akerman. The Black Girl records the story of a young Senegalese woman who moves from Dakar to Antibes, where she intends to continue her nanny work in a French couple house. However, she quickly realizes that her role goes beyond looking after children and reminds a servant position, having no prospects for leading a life she dreamed about. Finally, she commits a suicide. The narration of the film by Akerman is created by the daily routine of a widowed white woman, who takes care of her teenage son and work as a sex worker. She, in turn, in the act of liberation murders her client. The disturbing similarity of selected scenes related to labour of both women, such as preparing meals and serving them, receiving salary and finally scenes of “salvation”, raises the question of whether Akerman saw the movie by Sembène? Can we consider it as an inspiration of or rather (cultural) appropriation? The third video from the triptych consists of a scene of a Thai massage performed by a woman on a man. The works were accompanied by newspaper clippings describing how a two-year-old Kurdish girl was killed by Belgian Police who tried to stop the car with refugees attempting to cross the border. 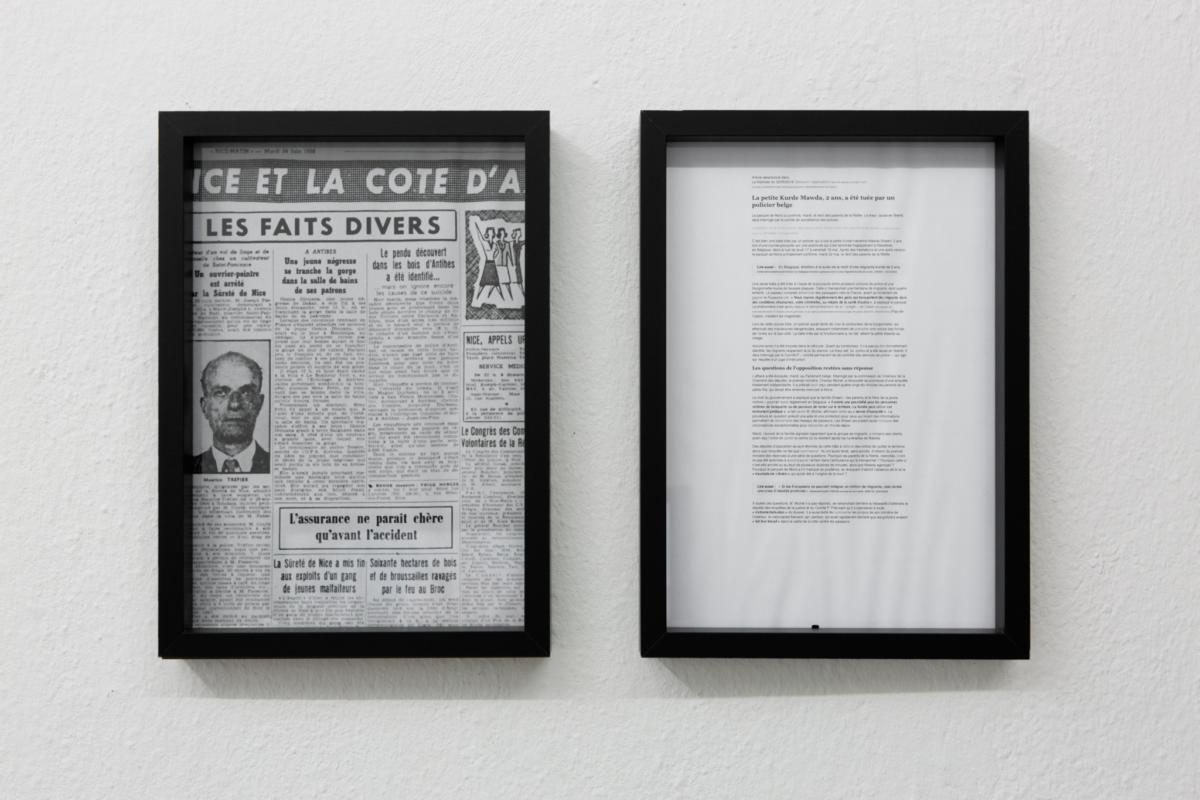 Saddie Choua, Today is the shortest day of the year but somehow hanging around with you all day makes it seem like the longest, Richas Digest, Cologne. Photo: Tamara Lorenz. Thanks to the courtesy of the Akademie der Künster der Welt in Cologne 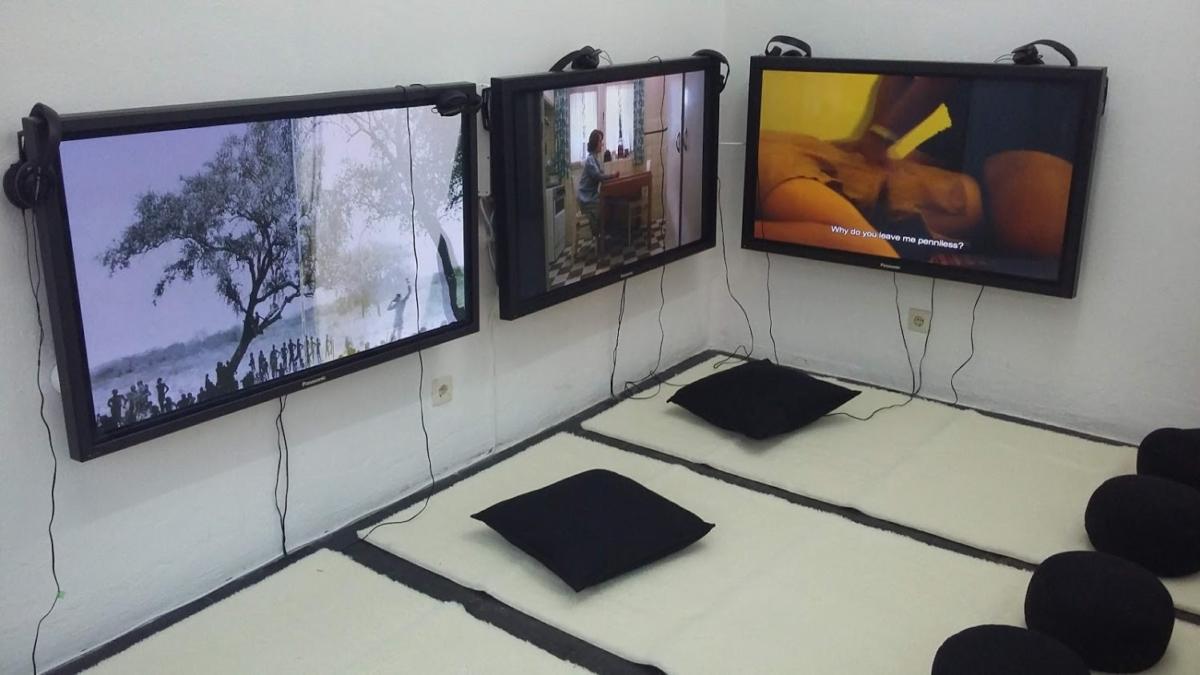 Saddie Choua, Today is the shortest day of the year but somehow hanging around with you all day makes it seem like the longest, Richas Digest, Cologne. Photo: Jan Kryszons. Thanks to the courtesy of the Akademie der Künster der Welt in Cologne

Although Saddie Choua placed the issue of labour in the frame of intersectional dependencies related to gender, ethnicity and class division, she did not avoid the essentialization. The tensions and distinctions may be present in the particular works used by the artist (as in the case of movies by Sembène and Akerman), but they disappear when the materials are combined into one. They are compressed into the form of dichotomous relations between presented figures, which limits the nuanced image of reality. All underpriviledged characters remain in the formerly given categories, they provide services, they are subjects of oppressive practices, they are lost causes even if they are actively “working” to exceed them. There is no escape. This is how I conceive an only possible way of liberation, a tragic category of agency – a suicide, which might be interpreted as a sign of helplessness.

Universalism without essentialization is a beautiful idea hellishly difficult to be applied.

Appropriation and Confrontation: Art and Religion in Poland

The Photobloc: Central Europe in Photobooks

‘What Whispers Are These?’ by Iza Tarasewicz at Galeria Krynki

Identical Identity. In Conversation with Agnieszka Grodzińska and Vitalii Shupliak