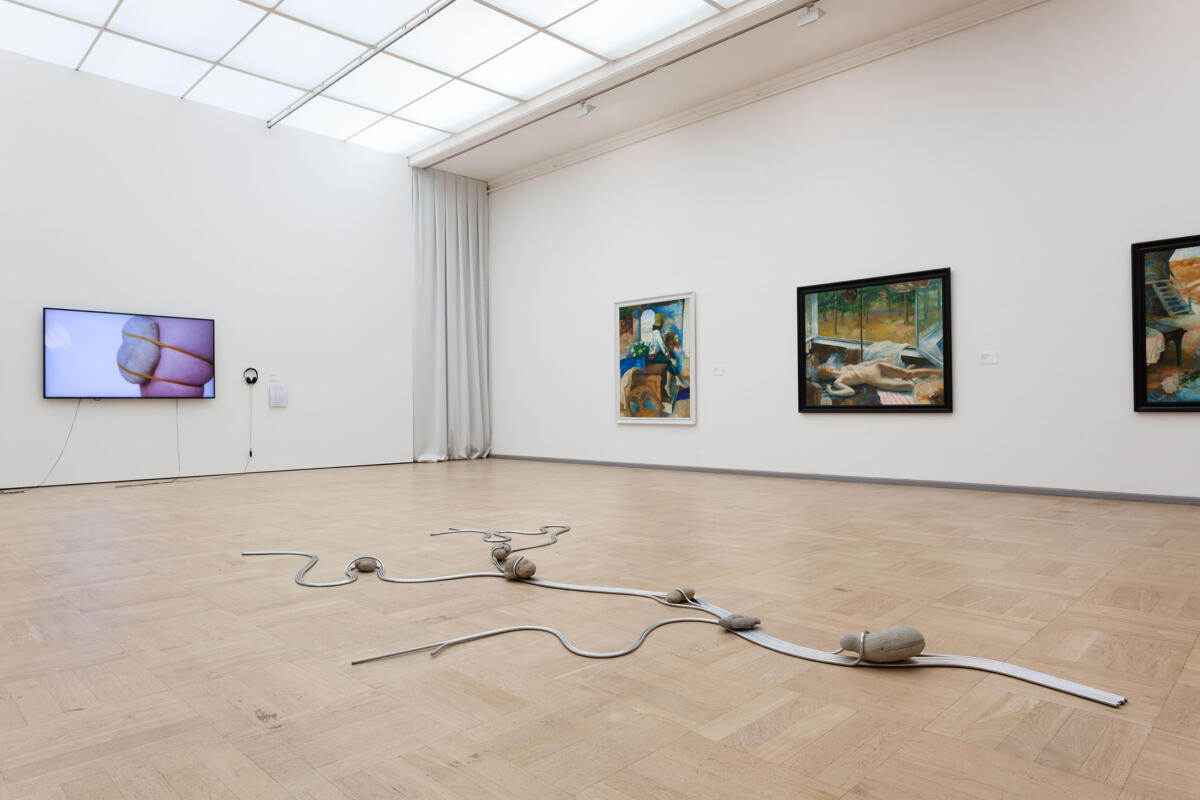 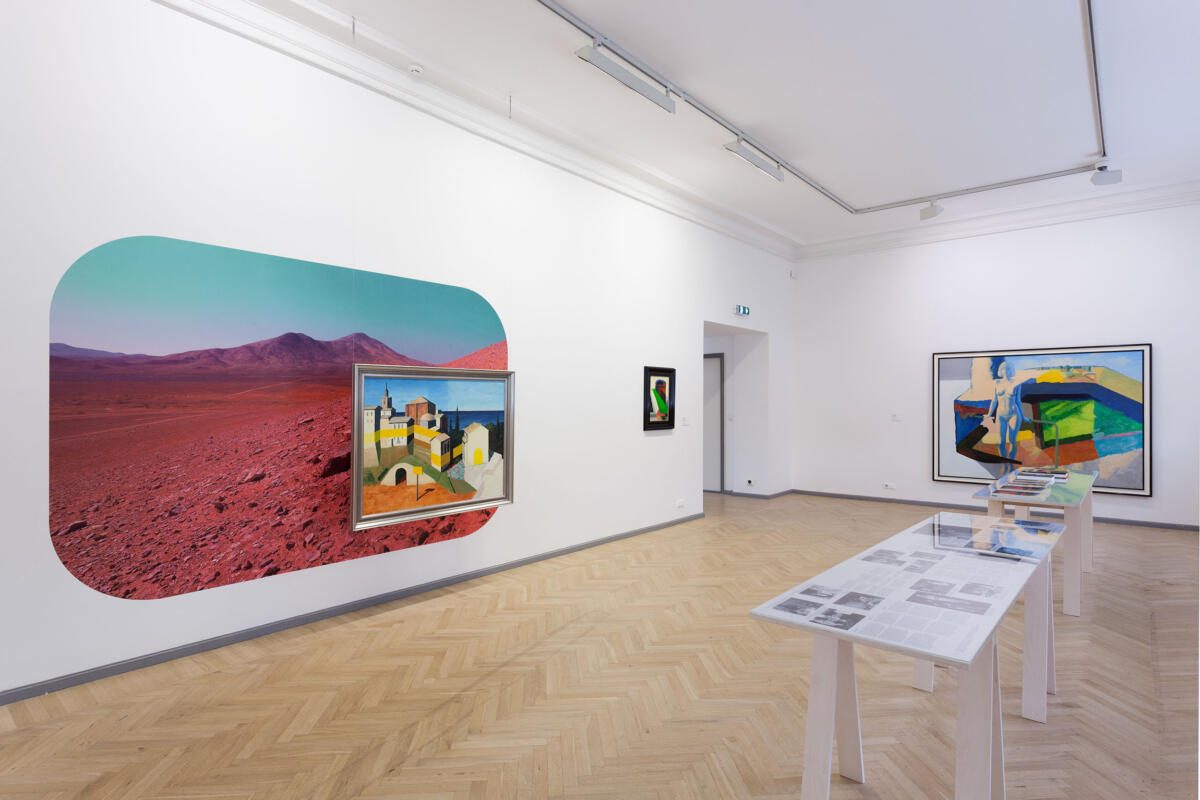 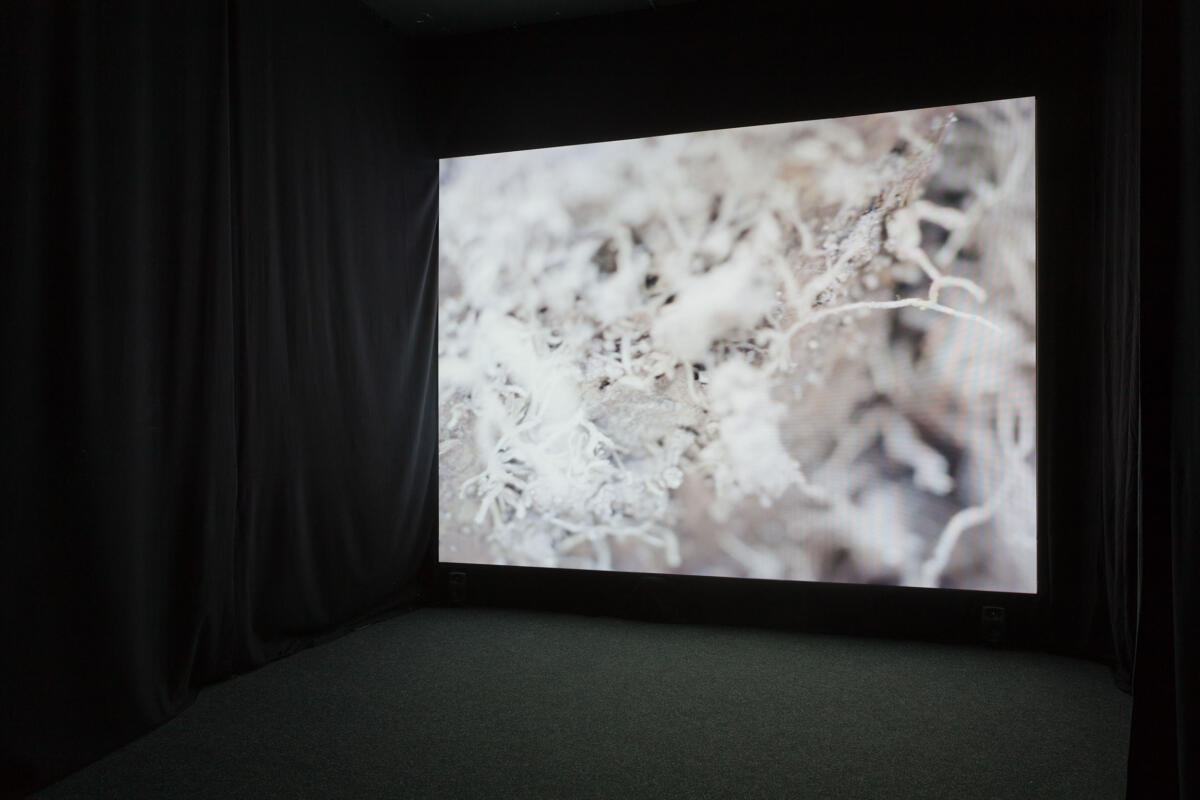 The exhibition ‘Olev Subbi: Landscapes from the end of times’, curated by Àngels Miralda at the Tallinn Art Hall features the works of seven young artists (all millennials born between 1980 and 1991) alongside Subbi, divided across three sections: ‘Subject and Landscape’ (Nona Inescu, María Dalberg); ‘In Search of Freedom and Memory’ (Nazim Ünal Yilmaz, Juana Subercaseaux, Maya Watanabe); and ‘Parallel Worlds’ (Ad Minoliti, Larry Achiampong). The installation of new and pre-existing works by these artists alongside the paintings of Subbi creates pairings that throw new light on this ‘old’ master painter of the Silent Generation.

The first juxtaposition and section can be found on the right upon entering the Art Hall’s main spaces in a gallery featuring a number of landscapes with nude and clothed figures by Subbi, alongside a commissioned sculpture (Meander, 2020) and existing video work (Vesitigial Structures, 6’38’’, 2018) by Nona Inescu (Romania, 1991). While the video explores the suggested anthropomorphic features of manmade and natural rock formations in Romania and Carnac, France, Meander is a floor piece comprising a snaking metal form appearing like a river and its tributaries. Spaced along its course several concretion stones bearing resemblance to human anatomical forms punctuate its flow without impeding it. The work is placed beneath paintings such as Subbi’s Girl Under an Open Window (Tempera and Oil on Canvas), which depicts a young, lithe and pale female model beneath a window opening onto a landscape of green, rust and ochre colors. Arranged in this way, Inescu’s works frame Subbi’s gratuitous presentation of female flesh for the male gaze. Yes, the presentation of female nude in this way seems wholly unnecessary or unreasonable to the cultured western viewer in 2020. However, we are all — male, female and non binary — objects within a natural landscape that subsumes us however much we try to differentiate ourselves from it. The objectification of the female by the male is arguably a displaced form of this differentiation, and one we rightly try to move beyond. 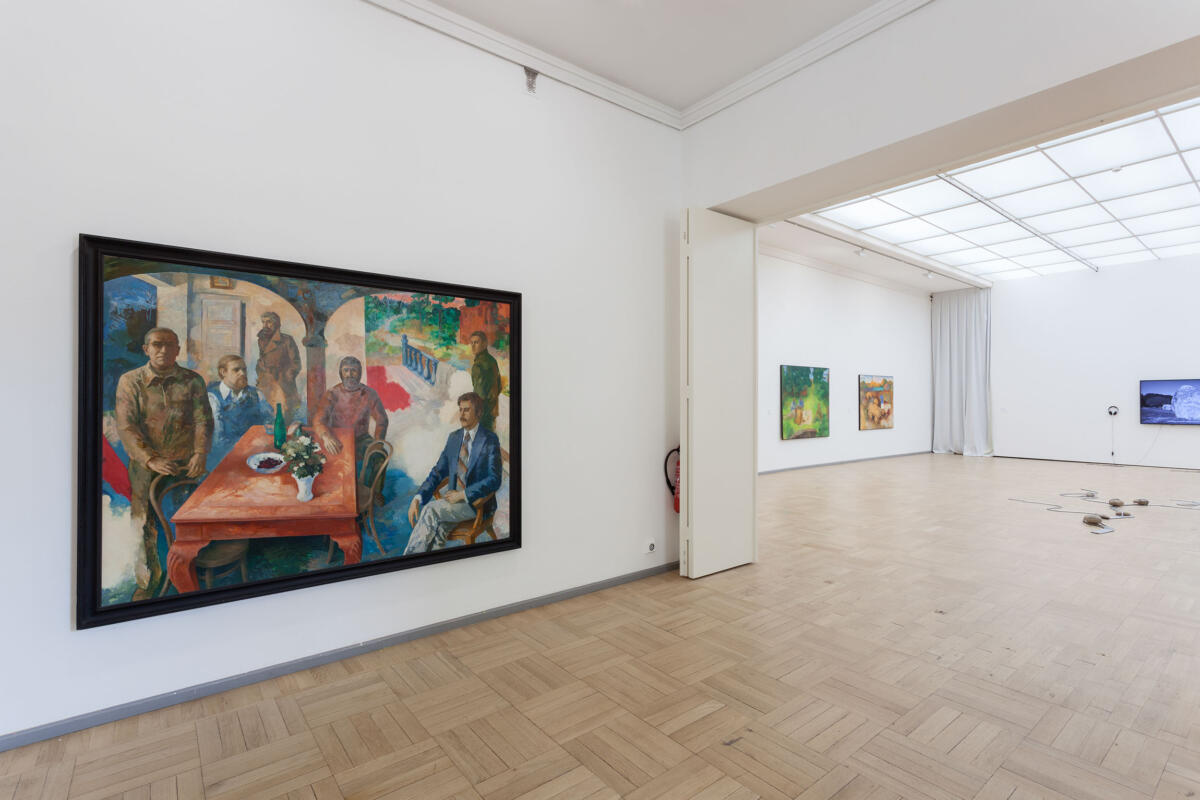 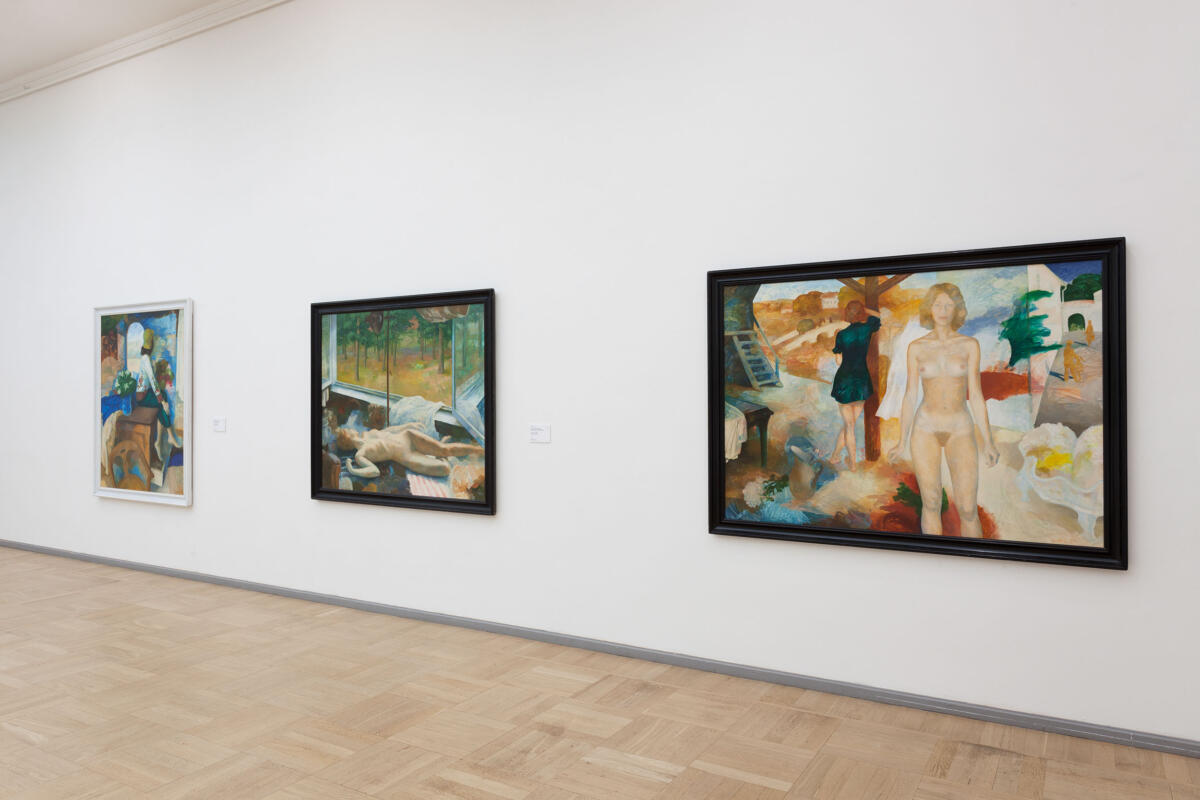 In the second section, ‘In Search of Freedom and Memory’ the exhibition approaches the sense of alienation evoked by the landscape when, unable to express oneself due to political censorship, it is all one has left to look upon. Upon entering, the visitor finds to the left a rare quasi political work by Subbi, an artist who, working in Soviet era Estonia, had grown accustomed to treating both the landscape and the human form as motifs that silently hold the colors, tones and lines whilst, by necessity, withholding opinions. By 2007, Subbi felt able to comment on the toll taken by history in his work Hella, Johannes and Eduard I (100x129cm) depicting his parents alongside Estonian Eduard Wirralt, in a bombed out Estonian Landscape. This break with an enforced silence is matched in its profundity by the curatorial and artistic licence taken in an adjacent room featuring works by Nazim Ünal Yilmaz (Turkey, 1981) made in response to Subbi’s works, which he displays directly adjacent to his own. Yilmaz’s own preoccupation with paint as a material sees him adopt a raw figurative style that draws comparison with German neo realists such as Lüpertz or Baselitz. In one juxtaposition we see an unusual early work by Subbi Roadbuilders (Oil on Canvas, 140x200cm, 1966) depicting topless men hard at work with spades, placed between Subbi’s Nude Girl in an Armchair (Tempera, Oil, Masonite, 140x121cm, 1971), depicting a typically svelte and passive female and Yilmaz’s Snowmen (Oil on Canvas, 180x170cm). The latter painting depicts five melting snowmen blending with a landscape composed of rough brushwork which, alongside the Subbi’s depicted workers again signals our connection to nature. However, this time, Yilmaz’s raw materiality evokes the way in which humankind is reduced to a material factor among many. The individual is a labourer of the land that will return to it and who is committed in the meantime to work on it to make a living. 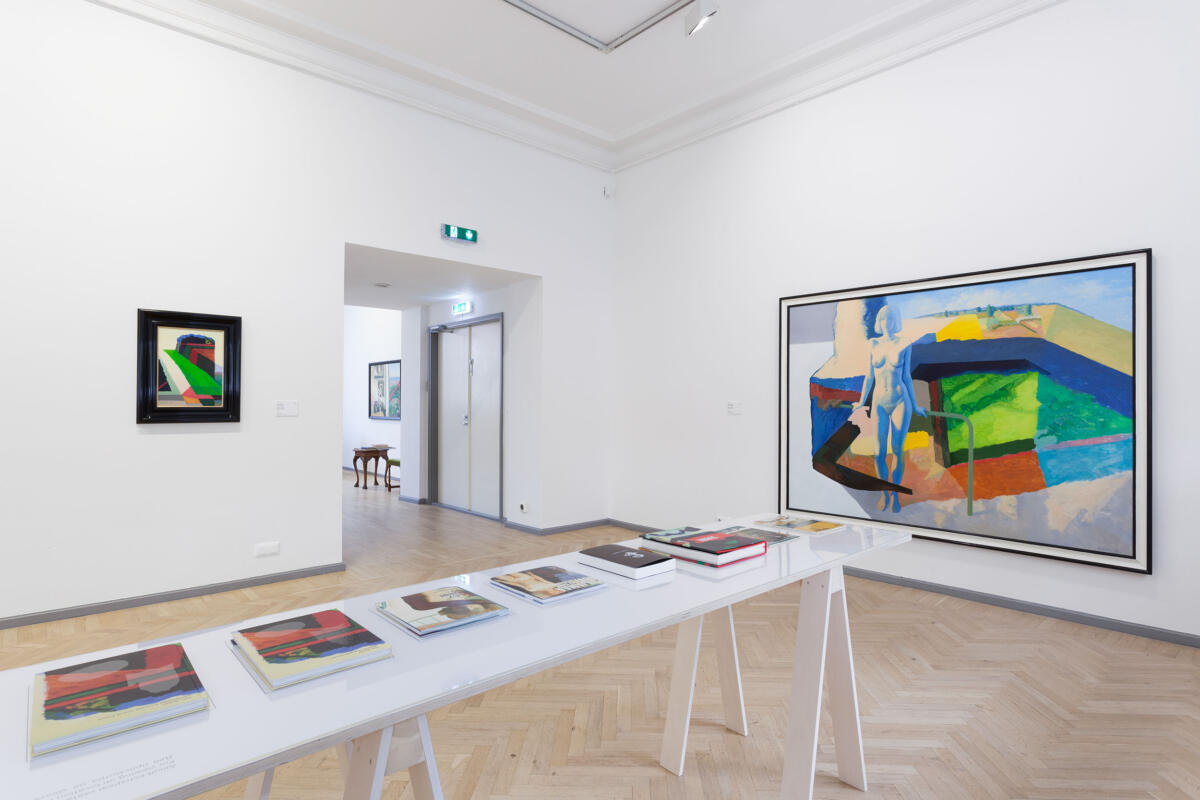 The third section, ‘Parallel Worlds’ explores the notion of landscape painting as an alternative reality that parallels it yet is estranged from it. Seemingly influenced by cubism, the work Eighth Foreign Town (Acrylic, Oil, Masonite, 100x129cm, 2007) depicts a geometrically impossible townscape. It is hung over a large-scale print by Ad Minoliti (Argentina, 1980), Mars in Atacama (Digital Print, 200×300, 2019), depicting the red planet, with its alarming alien soil. The pairing points to the role of art in creating a fantasy we can retreat into, which was — like Soviet sci-fi — a realm for testing the limits of freedom. In the post Soviet world that space for retreat is still necessary as we face so many challenges socially and politically. In an adjacent room Larry Achiampong’s series if short videos Relic Traveler (4k video, 14’’12’, 2017) presents an Afrofuturist alternate reality in which the west has met its ruin and the African Union leads an archaeological search for information which can help avoid a repeat of the catastrophe which led to the west’s demise. These forays into what Achiampong (UK, 1984) terms ‘Sanko-time’ — from the Ashanti tribe’s term ‘Sankofa’, meaning looking back — reveal via narrations superimposed over landscapes, a prosperous Africa acutely aware of its colonial past and a Britain dealing with felt indignity of its diminished status. These filmic landscapes represent a place artist’s, including Subbi, have long gone to as a means of evading the immediate prohibitions, falsifications and impositions of reality. As the narrator states, reflecting on post colonial era Africa: “In nearly all African countries back then, the language used in government and media was a relic inherited from the waves of colonisation.” It is this line that we see the unity between Subbi’s output and that of artist’s struggling against or working within the impositions of today. 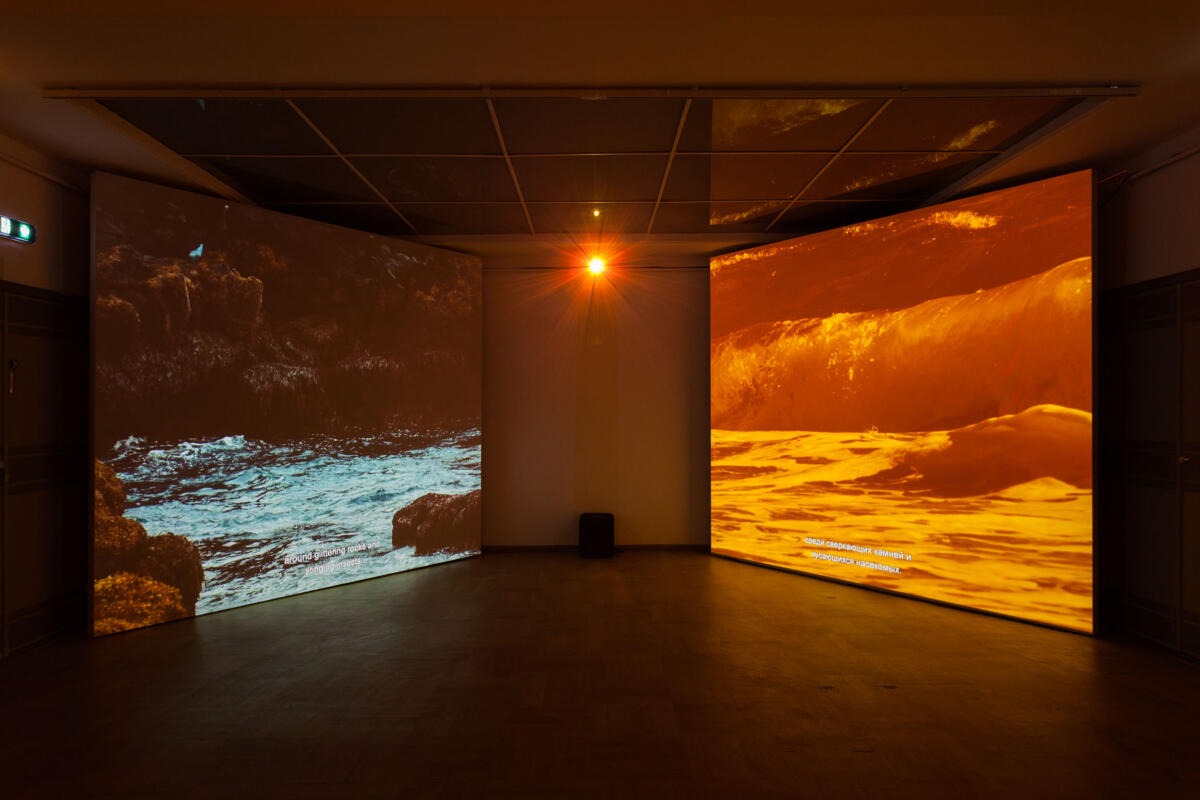 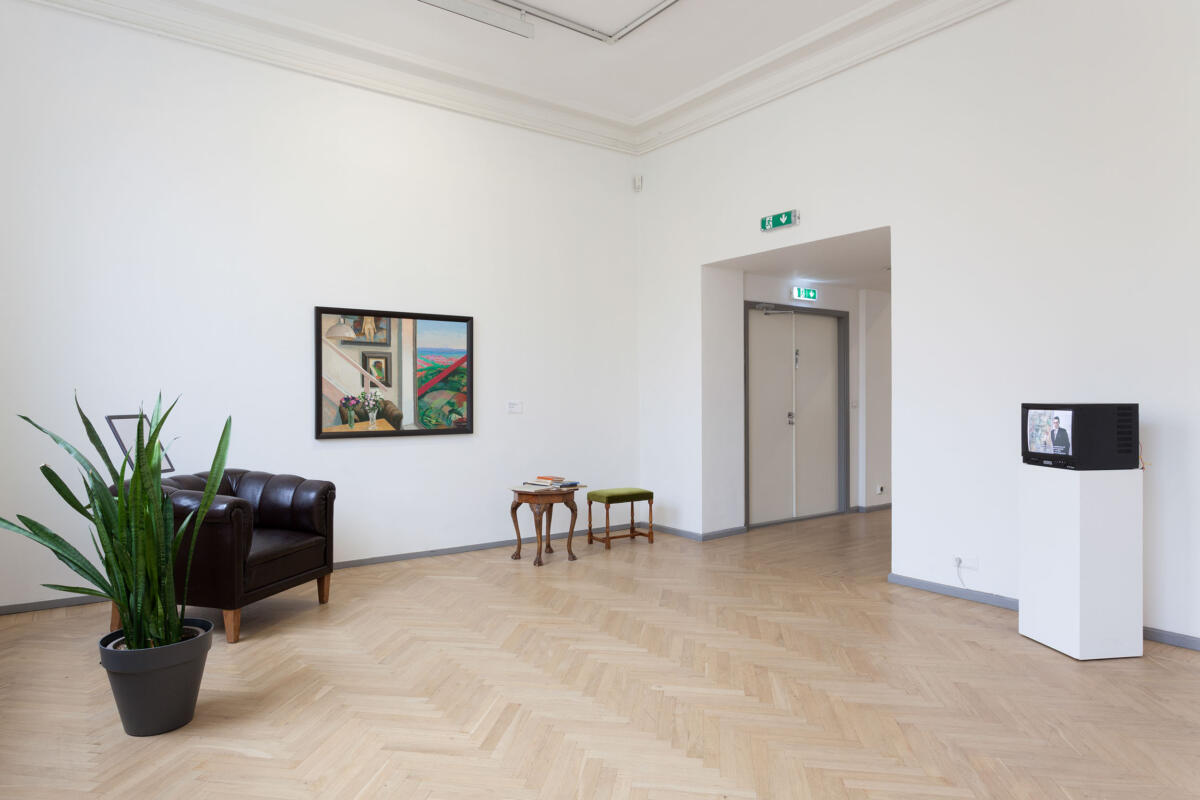 Such observations are tribute to the exhibition’s success in representing the works of one of Estonia’s most established Post War and Post Soviet artists in an era barely recognisable to the period he rose to prominence in. Much has been made in recent years of the cultural gap between millennials and their elders, who have been collectively grouped together under the term ‘Boomer’. While these divides tend to coalesce around date of birth, it would be more useful to divide millennials from the forebears in terms of those artists whose creative identity was formed by the #metoo and #BLM movements, versus those who grew up and came to artistic maturity in a world that made such movements necessary.

There is a trend online towards dealing with the older generations’ apparent ignorance of identitarian political demands by erasing or ‘cancelling’ their output. However, this ignores the tendency for opposing forms of creative and political expression to cast a shadow upon one another, thereby defining their contours. As Subbi himself said, “Anything new needs something old in order to oppose it. All in all, my task is to be a spoke in the wheel of progress. Progress will gain from it.” Seen in this way, individual spokes (or artists) regardless of generation, exert a force necessary to the functioning of the whole. Subbi’s role has been done adequate justice in this show, alongside — and because of — the participation of his antecedents.