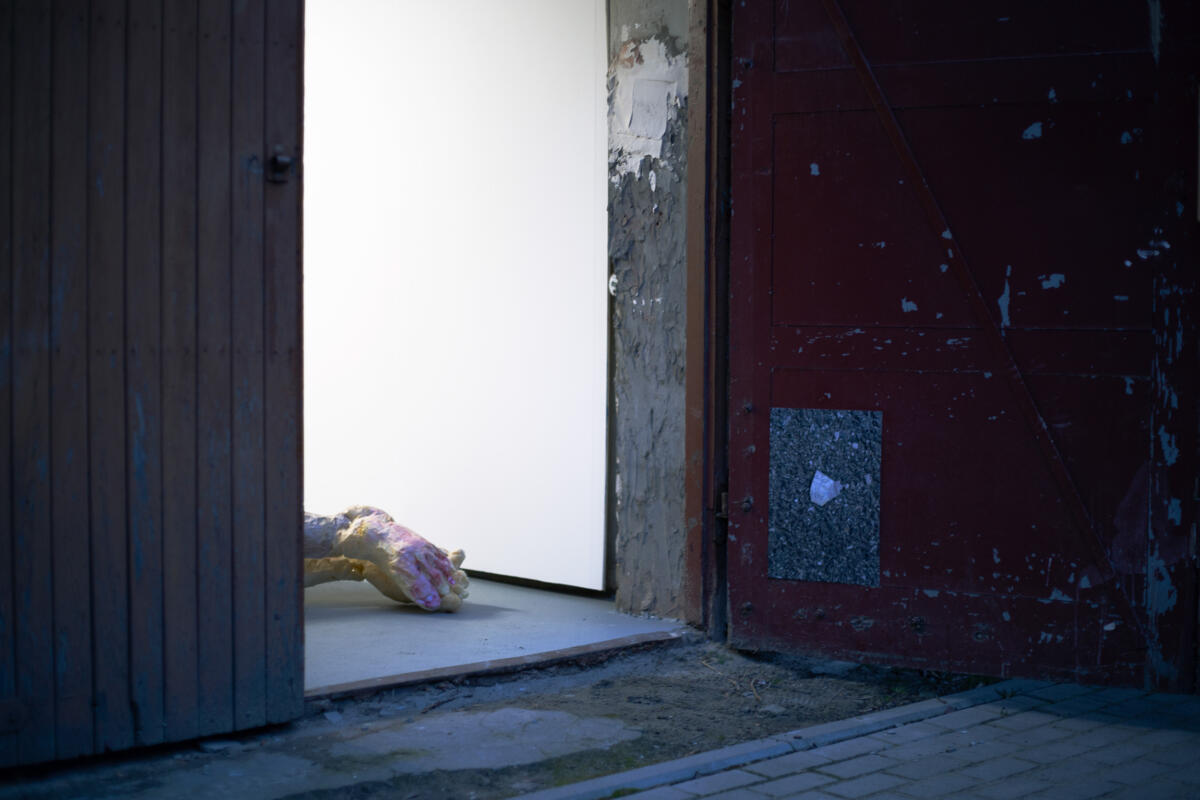 Tuesday morning, July 16, 2019. I walk into one of my assigned apartments. It looks like yesterday’s guests didn’t arrive. I may not have to change the bedding. I would then save not only time, but also gloves – I have a latex allergy, so out of necessity I buy the expensive nitrile ones. I’d rather not waste them. I check the towels, they’re folded square, as if untouched. After unfolding them, however, I find one that’s covered in blood. I look at my hands, which are now soiled with someone else’s blood. And at the deep, fresh cracks on my fingers from working with chemical detergents as a room cleaner and with plaster as a sculptor. I imagine the viruses seeping through the cracks in my flesh. In a panic, I clean as fast as I can, throwing the dirty linens into a bag for the laundry workers. I pack the bloody towel separately and carefully label it according to procedures as potentially hazardous material. That same day, I take a bus to Wolska Street to the Preventive Care Clinic, where I get a referral for HIV and HCV tests. The diagnostics will take six months. In the queue to collect the drugs there are a lot of fags like me, only dressed up and smelling as if they’re straight from the club. Perhaps they scored a risky one-night stand? I pick up Truvada and Isentress. The doctor hints that Truvada is used in the West as PrEP. I first heard of PrEP a long time ago, when it was still reserved only for rich fags.

Two perspectives converge here. The first is marked by queer identity, which has become inextricably linked with the fear of AIDS. The second perspective is the everyday life of a precarious artist who earns his money by cleaning apartments for short-term Airbnb rentals, who is exposed to hazardous fluids and toxic materials in the workplace.

These two experiences merge on the skin, the body’s protective layer, and are solidified on the surface of the sculptures as collages of images of exclusion. The objects reveal the experience of fighting physical filth and the struggle against the socially imposed sense of shame associated with both homoerotic desire and economic exclusion. They are a reaction to the shaping and marginalization of non-heteronormative bodies by heteronormativity and to the consequence and invisibility of precarious work.

Skin is Soiled, Blood is Spoiled is on view by appointment thru April 30, 2021.
https://stroboskop-space.pl/Sebastian-Winkler 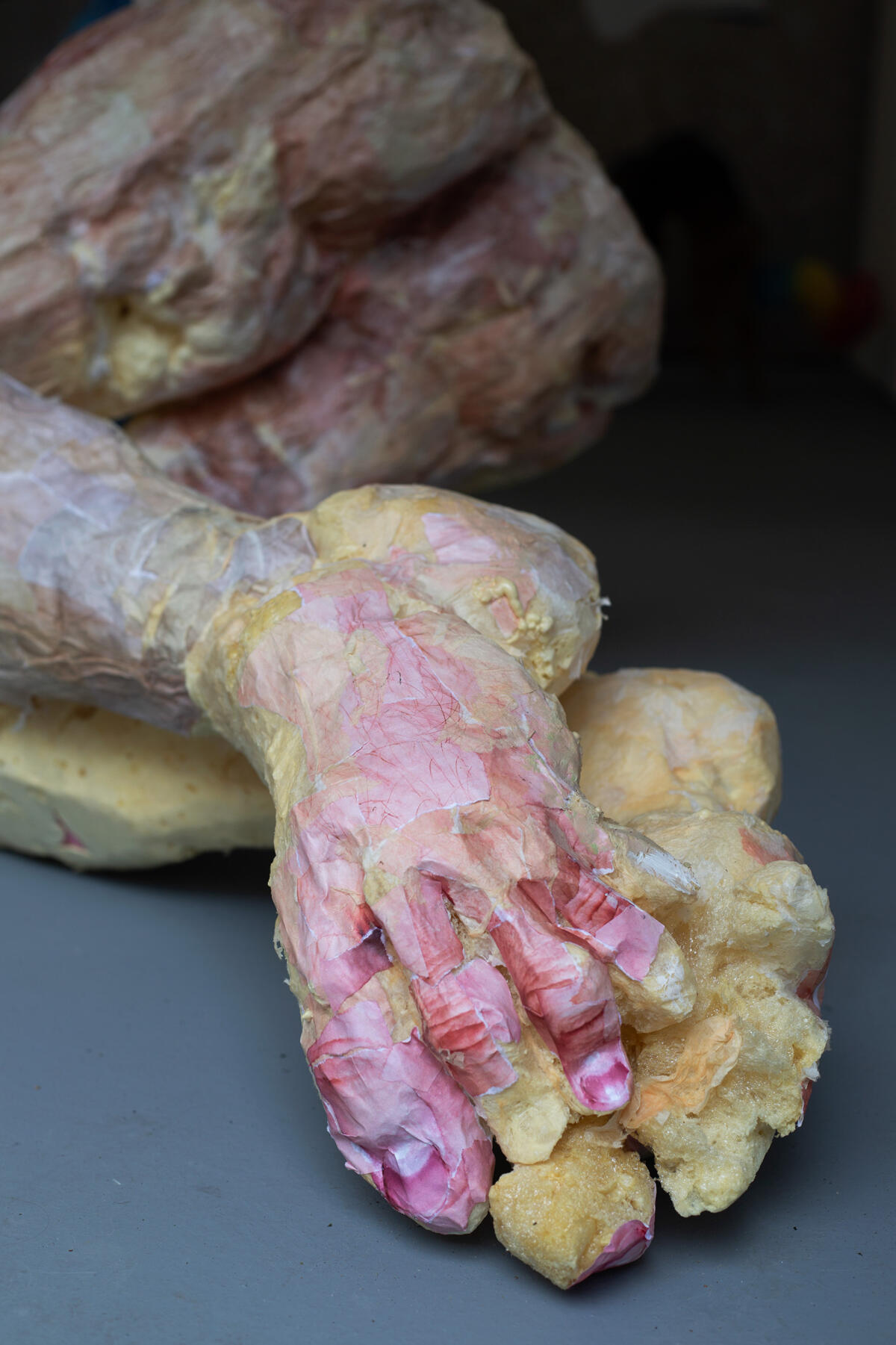 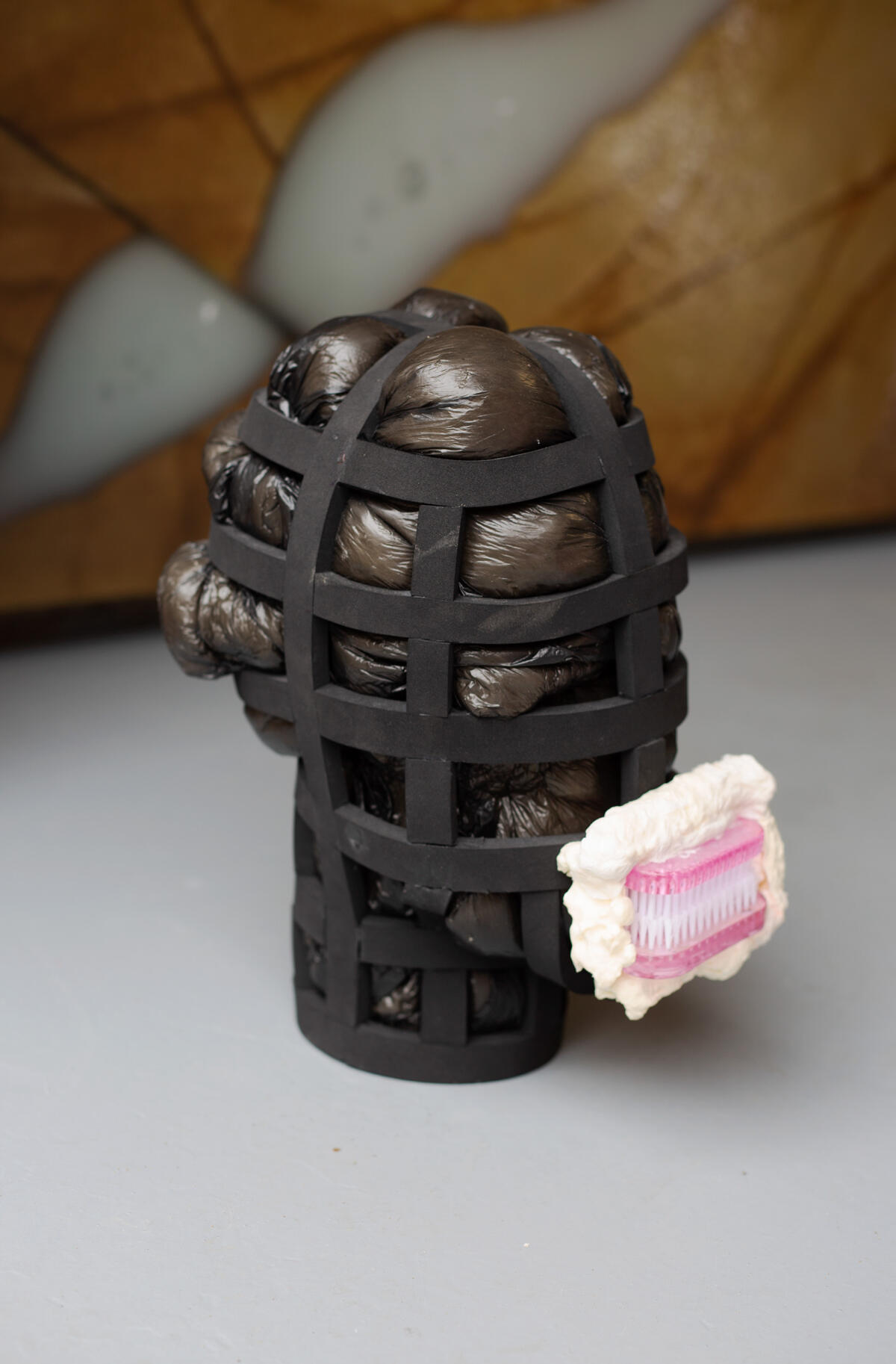 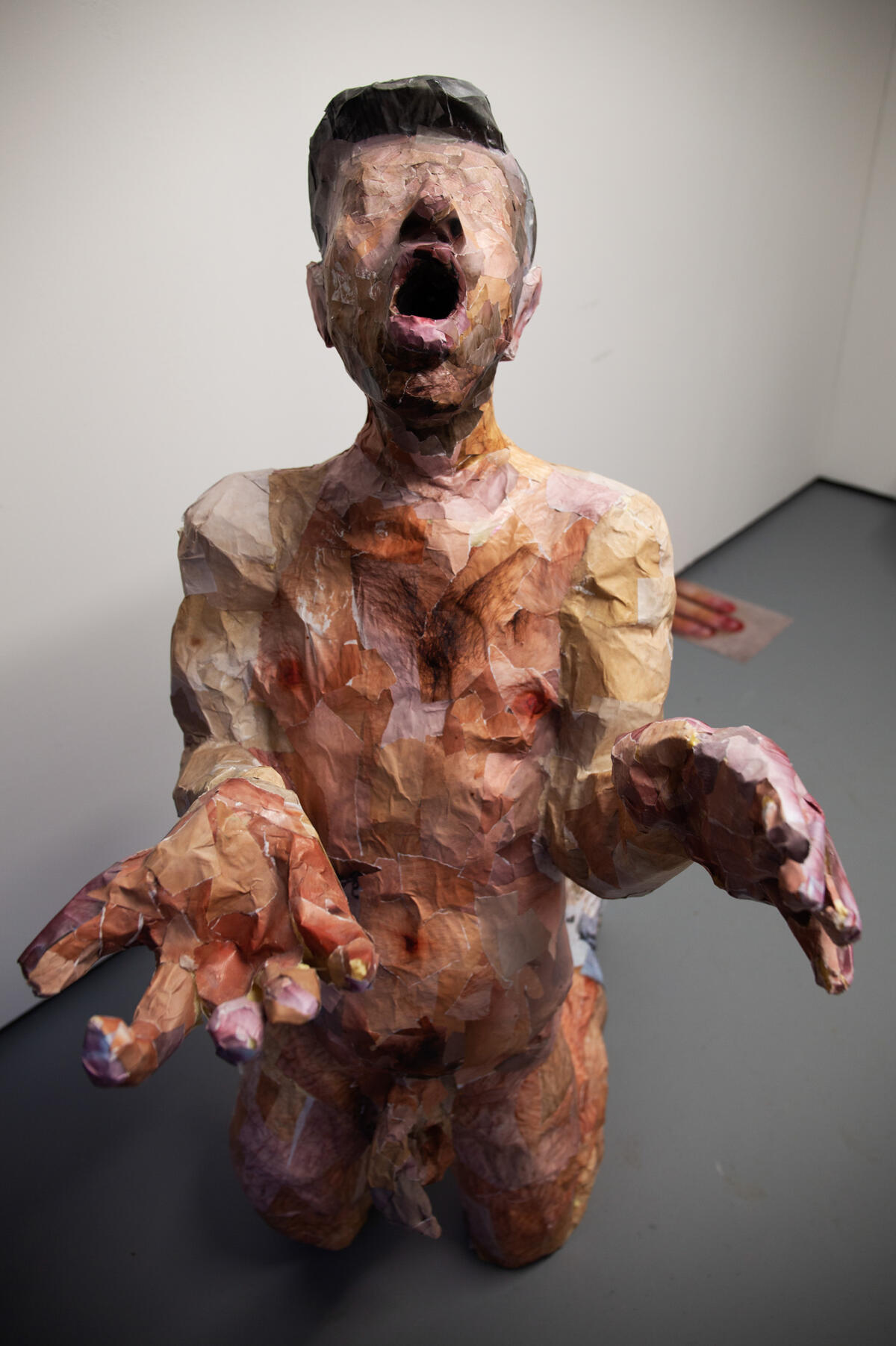 Can you talk about the process of developing this body of work, its evolution?

The work is rooted in a personal experience that led me to explore how my artistic and paid work (which in the art world is not necessarily the same thing) is manifested in and on my body. So I began by photographing my body using my phone, which was my tool and inseparable companion during the time I was working as a “room cleaner”. Each sculpture was created by trial and error, with emphasis on error, because many of them ended up either in the trash or as recycled material for subsequent pieces. In the end, no finished, fully-realized forms emerged from the process, rather a critical mass of prototypical, twisted, undeveloped forms, which collectively gained a certain power and ability to express various aspects of precariousness.

This body of work has some interesting ties to the more classical canon of sculpture and art history, can you talk about these liminal, fragmented, patchworked and segmented bodies in relation to classical sculpture? Is this meaningful for you in any way?

I must admit that classical sculpture has not come up in my thinking so far. Perhaps because of the nature of my work – I have a background in painting, not in sculpture. I apply the strategy of “deprofessionalization”. That is why I feel better in the field of sculpture, over which I do not have full control. That is also why I use foam as a material. Of course, it is also important that it is cheap, it would be difficult to talk about the experience of precariousness using bronze or marble. But the most important thing is that it is formless, it is impossible to control it. It seems queer to me in the sense that it is incapable of reproducing a prior intention: neither the artist’s expectations of the end result nor society’s expectations of bodies and representations of the body. Classical sculptures embody technical mastery and formal perfection, and even when mutilated they represent a resistance to time and transience. Marble representations of goddesses or heroes have survived thousands of years – in this sense they are a symbol of human agency and power. My works, on the other hand, are vulnerable to external conditions, they are made of shapeless materials, they deteriorate with each transport, they are sensitive to humidity. The scraps of photographs, with which I cover my sculptures, fade from sunlight. They are fragile and impermanent just like my body, they were not created “for posterity”. In their ragged form, as fragments, they are rather a record of the fragility of bodies. At the same time they point to them as a space for ‘somatizing’ mental states and emotions to play out. 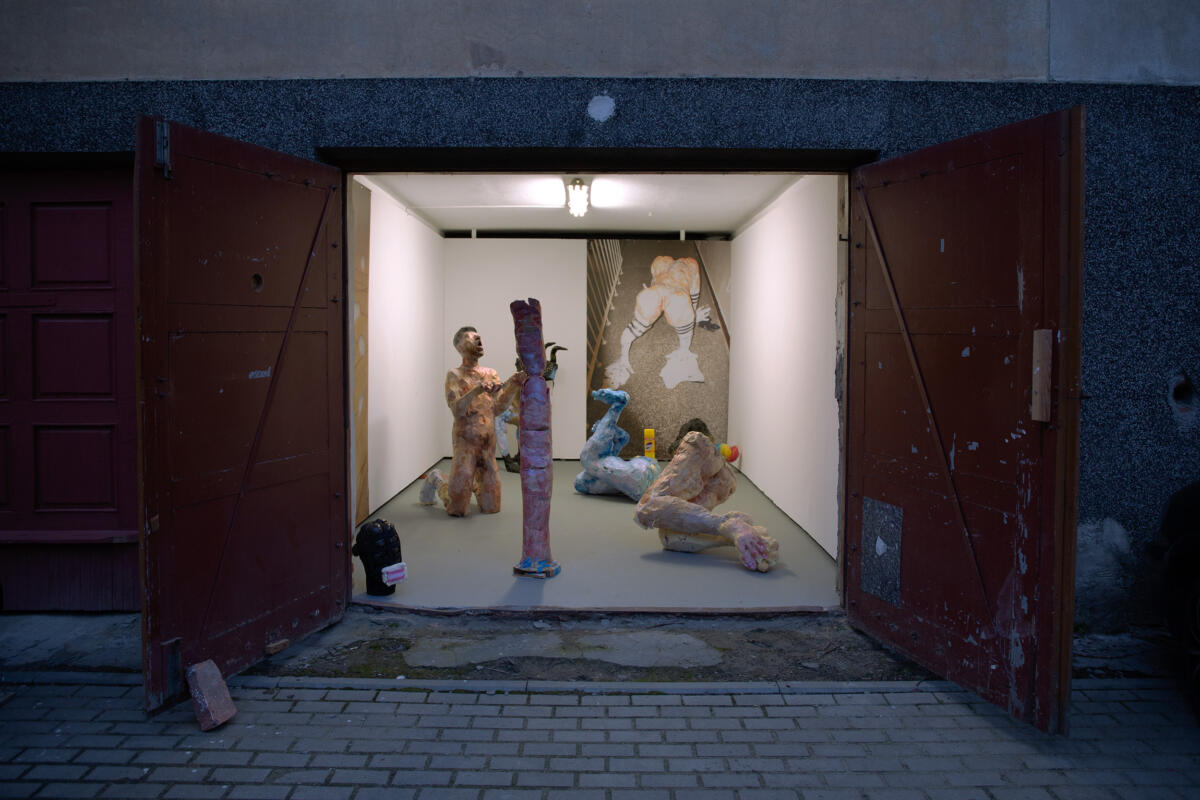 The ‘skin’ of your sculptures is formed by collaged fragments of photocopied images, can you talk about the role of photography in your work and the significance of this negotiation between 2 and 3 dimensional space and experience of image?

As I mentioned, it started with documenting workings of my body as a  tool, as a sexual object, as a way of existing in the world, of enduring and passing in time. I began to print these photographs – on low-quality paper, in a cheap photocopying shop, because only in this tangible form, even in the poorest quality, did they become real, material. I brought home folders full of prints, too weak to function as separate, independent photographs – they were often out of focus, had poor color, the paper was crumpled. So I started to work with them in space – tearing them into pieces, bending, gluing, subjecting them to all kinds of operations. At some point I decided to transform them into full plastic sculptures. Spatial forms establish a different relationship with the viewer than two-dimensional images – especially in such a cramped space as Stroboskop – they cannot be so easily overlooked. Being in the same space with them forces one to take their presence into consideration; one has to be careful not to trip over them. They remind us that seeing is not abstract, but is fixed in the body. In short, one can say that this has been an escape from immateriality, digitality, virtuality, or perhaps the pursuit of physicality, tangibility, carnality.

Sara Ahmed’s “Queer Feelings,” a text about the discomfort of excluded people, helped me to more fully understand what I was doing and why. According to Ahmed, the discomfort manifests itself, among other things, as a sense of persistent awareness of the surface of one’s own body. So I started photographing my skin, piece by piece. Anyway, focusing on one’s skin and obsessively looking at it has a long, often painful, tradition in the queer iconosphere. Images of queers looking at their bodies from all sides in search of sarcomas have appeared in queer visuality since the beginning of the AIDS epidemic. 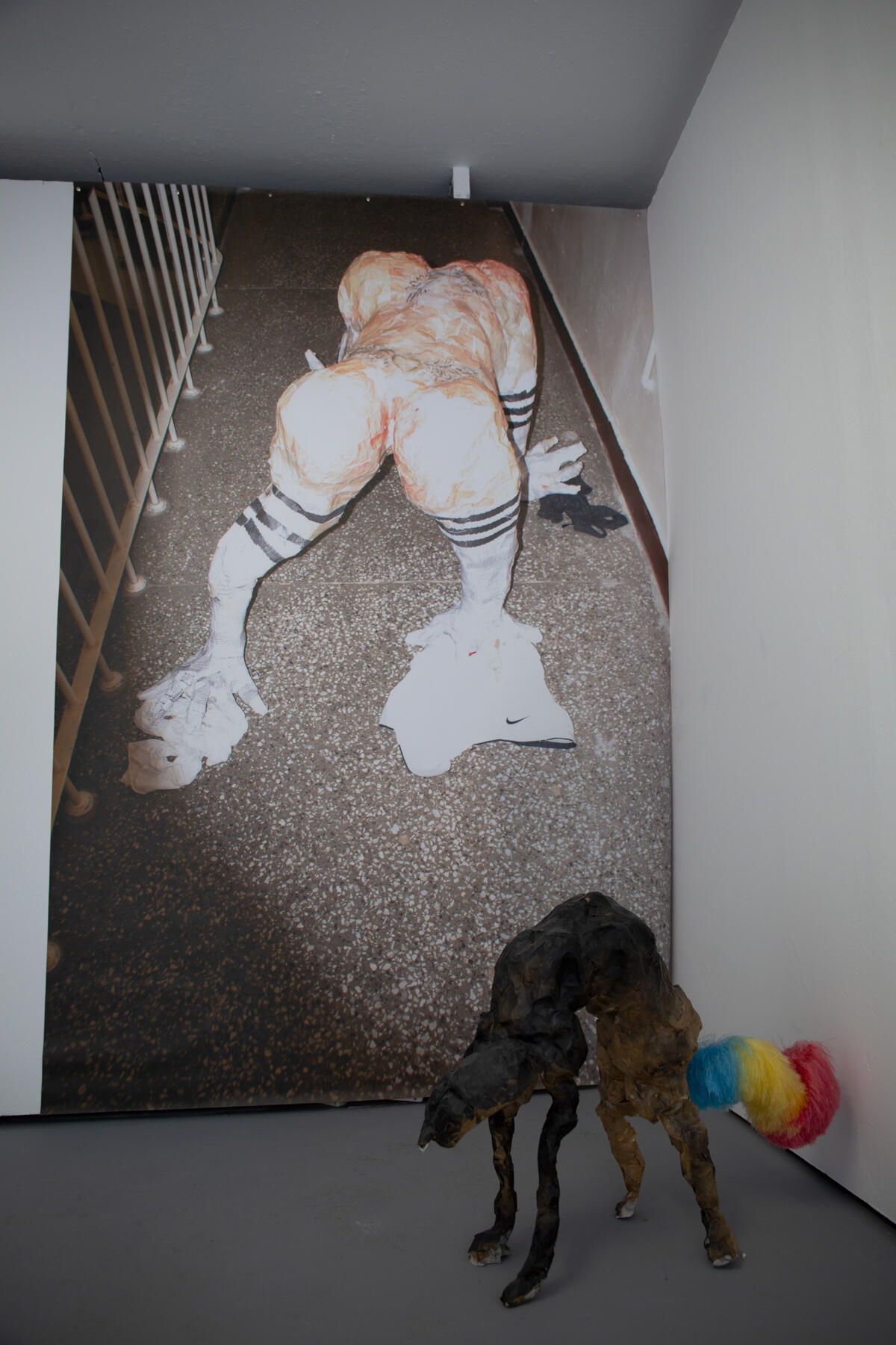 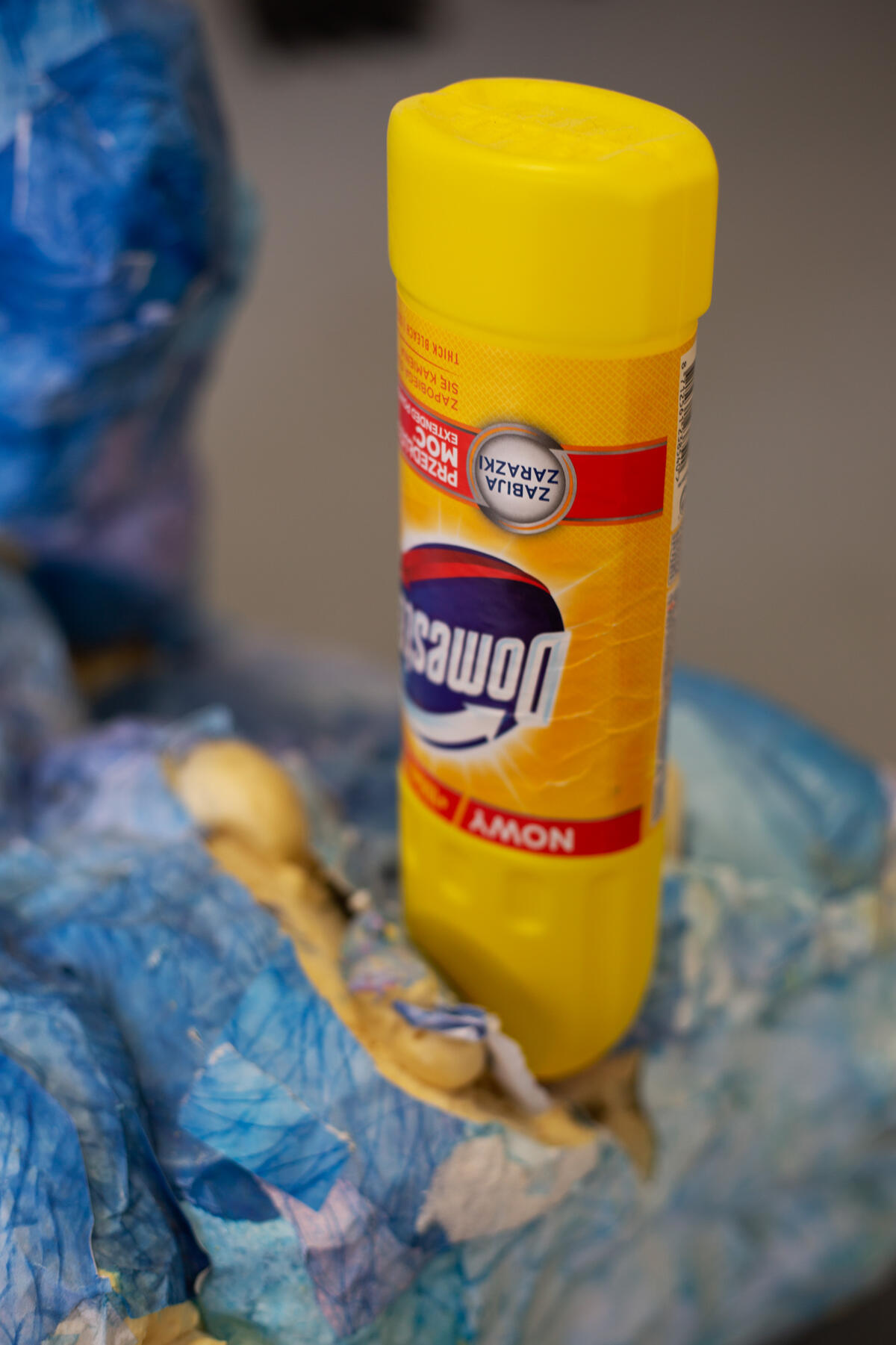 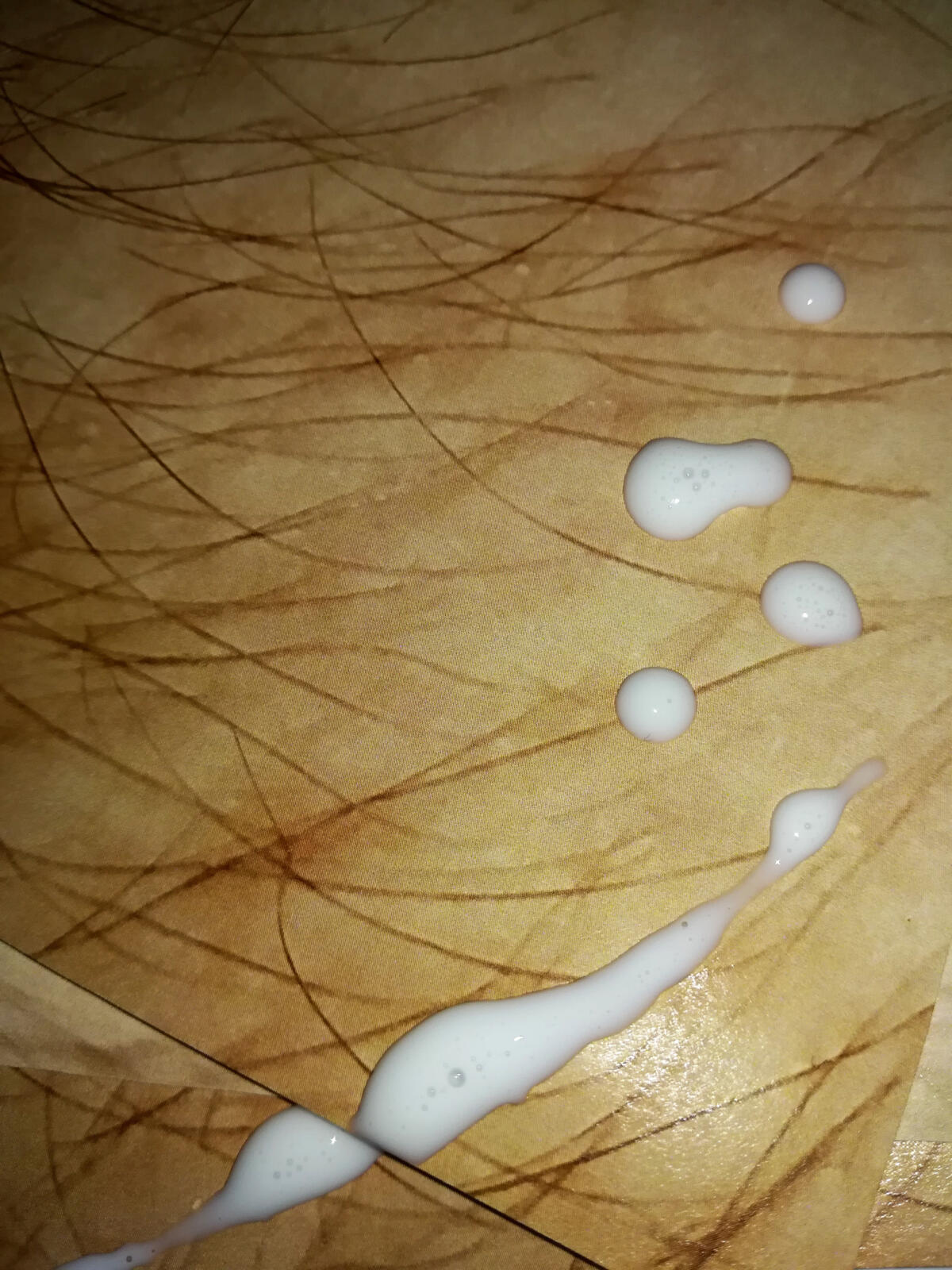 In the exhibition text you refer to the persistent fear of AIDS, as well as “experience of fighting physical filth and the struggle against the socially imposed sense of shame associated with both homoerotic desire and economic exclusion”. Can you talk more about this intersection of class and sexual+gender identity, are they mutually exclusive?

In political discourse there is a division between the “social left”, sensitive to economic exclusion, and the “liberal left”, sensitive to the exclusion of sexual minorities. As if a lesbian or transwoman could not be poor, or as if, for example, a supermarket cashier could not be discriminated against in the workplace for being a trans man or gay. And in Polish society these people suffer most often from double exclusion and struggle more than others. In my work I adopt the perspective of intersectionality, according to which social position consists of a mixture of various exclusions and privileges. An educated middle-class man living in Warsaw experiences his homoerotic desire in a different way than a poor boy from a working-class family living in a small town or countryside. In this exhibition I elaborate on my queer identity, reaching back to the experience of precariousness and to my class background. At the same time, openness in speaking about my own sexuality, awareness of my position and the possibility of carrying out a certain reflection in the form of an artistic work is a kind of privilege, a result of social advancement, escape from a small town and access to education. It proves that I have reached the point where I can be unashamed, or less ashamed, perhaps even approaching the stereotype of a gay artist in the big city (which probably originated from the fact that artists were the first people able to talk openly about their sexuality). The objects on display also indirectly reveal a generational privilege resulting from something as casual as the year of birth. This was brought to my attention by Paweł Żukowski, who reminded me that PrEP[1] and preventive treatment arrived in Poland relatively late. The previous generation could not ad hoc counteract the infections and had been treated with AVR. Although, of course, the greatest price was paid by the victims of the first wave of the epidemic. Even now, PEP[2] is not universally available – the reimbursement covers accidents at work, but does not include risky sexual contact. This leaves sex workers, among others, unprotected. 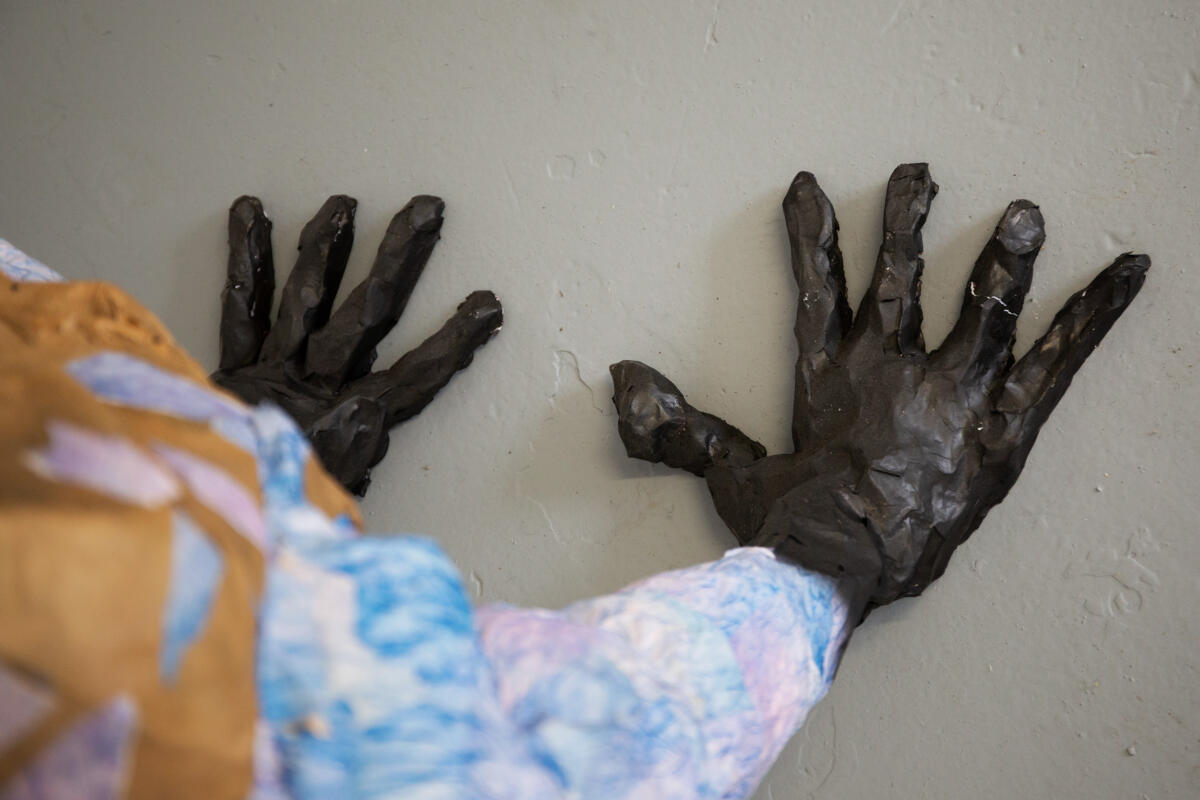 You’ve mentioned this notion of bodies (which, while referring to physicality also can surely reference formal political structures) being pre-shaped by heteronormativity, and the comfort and dis-comfort that exists through this. How does a queer body find/create comfort outside of this paradigm? Is it possible?

In the aforementioned text Sara Ahmed seems to see such potential in the grouping of queer subjects, in taking pleasure in communing with non-normative bodies, in occupying a space, a street, or a club, in creating more or less permanent queer enclaves.

My beloved photographer Nan Goldin’s statement sounds very interesting in this context. In one of her interviews, she explains that contrary to popular belief, she has never been in the business of portraying the “marginalized community.” “We were never marginalized, because we were the world. We didn’t care what straight people thought of us, we had no time for them, they didn’t show up in our radar (…) Only the most straight people can see it that way still.”

Political struggle for rights and recognition, on the other hand, inevitably involves discomfort, coming out to society, to the majority, having to confront the heteronorm, negotiating one’s presence and, in effect, exposing oneself to attack.