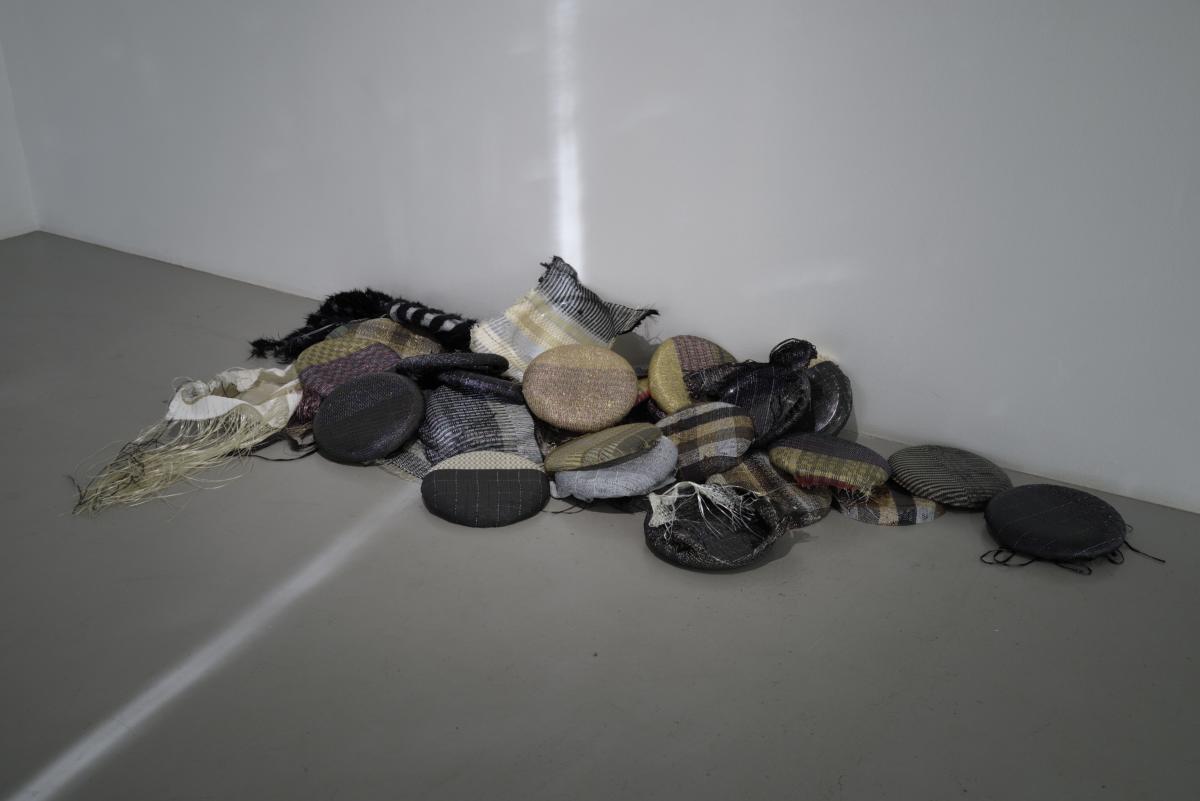 “Save As” is an exhibition of experimental textiles by Kärt Ojavee and Johanna Ulfsak.

A large fabric hanging in the middle of the gallery splits the space in a diagonal line. The asymmetrical arrangement nods to a modernist tactic often employed by the early 20th century textile designers like Annie Albers and Liubov Popova. The establishment of a relationship between textile art and design and industrial mass production, that was the basis for these women’s practices, is also the starting point for “Save As”. If the birth in the 1920s of ideas about textile design in an industrial age served as one of the axes for the exhibition, then the other one is represented by the choice of materials familiar to a 21st century consumer: PVC, kevlar, glass fibre, optical fibre and carbon fibre. Thus, the exhibition is stretched between these axes in an attempt to think and work through the current realities of textile production. 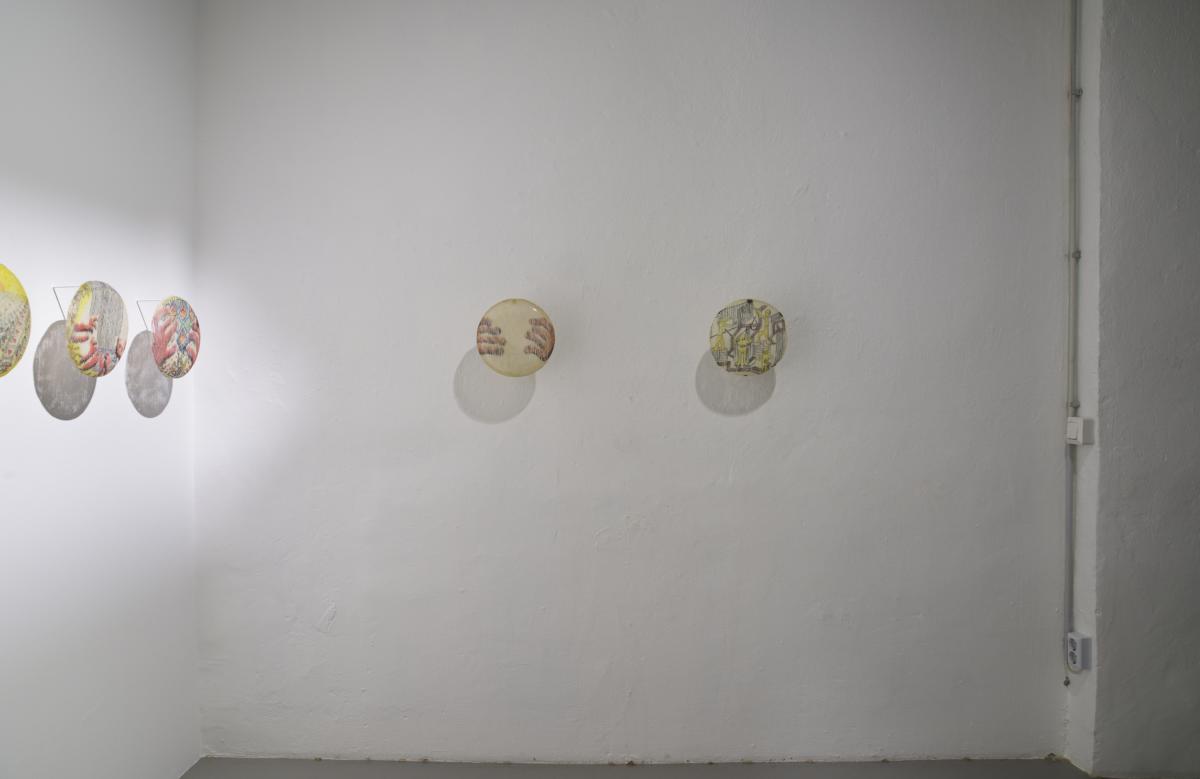 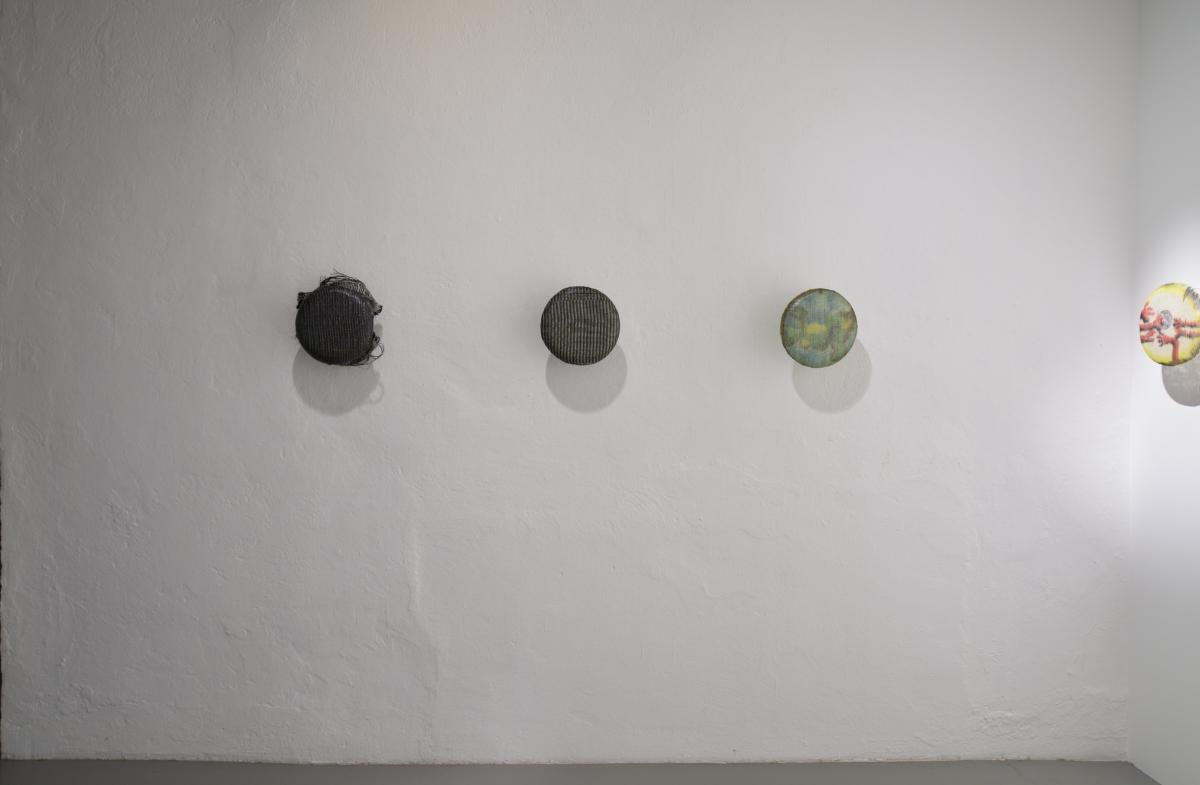 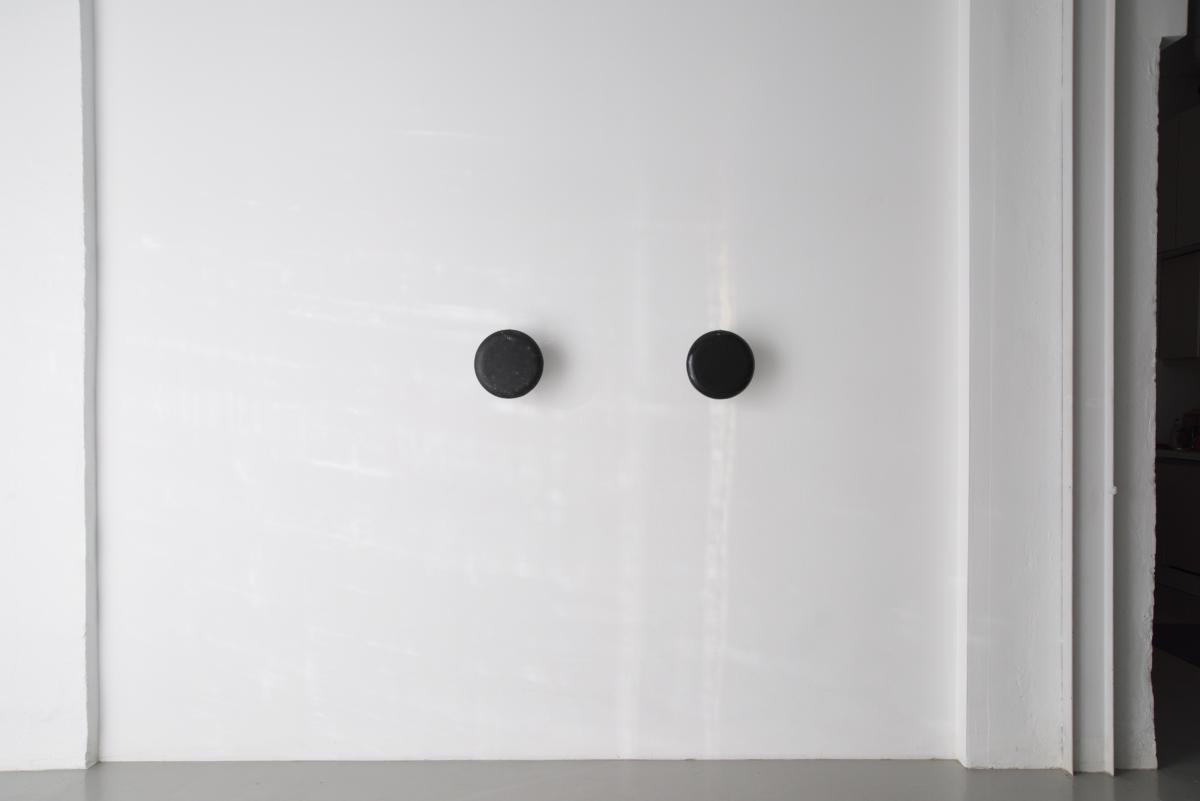 Choosing the time consuming method of hand weaving on a loom instead of using industrial machines, allowed the artists both a close proximity to the hi-tech industrial materials and a prolonged period of discussion, thinking and experimenting. Thus, the large textile represents both the time (150 hours) and the work (10200 lines) spent. The process, with all of its mistakes, imperfections and idiosyncrasies is “saved as” or saved into the form of the fabric. 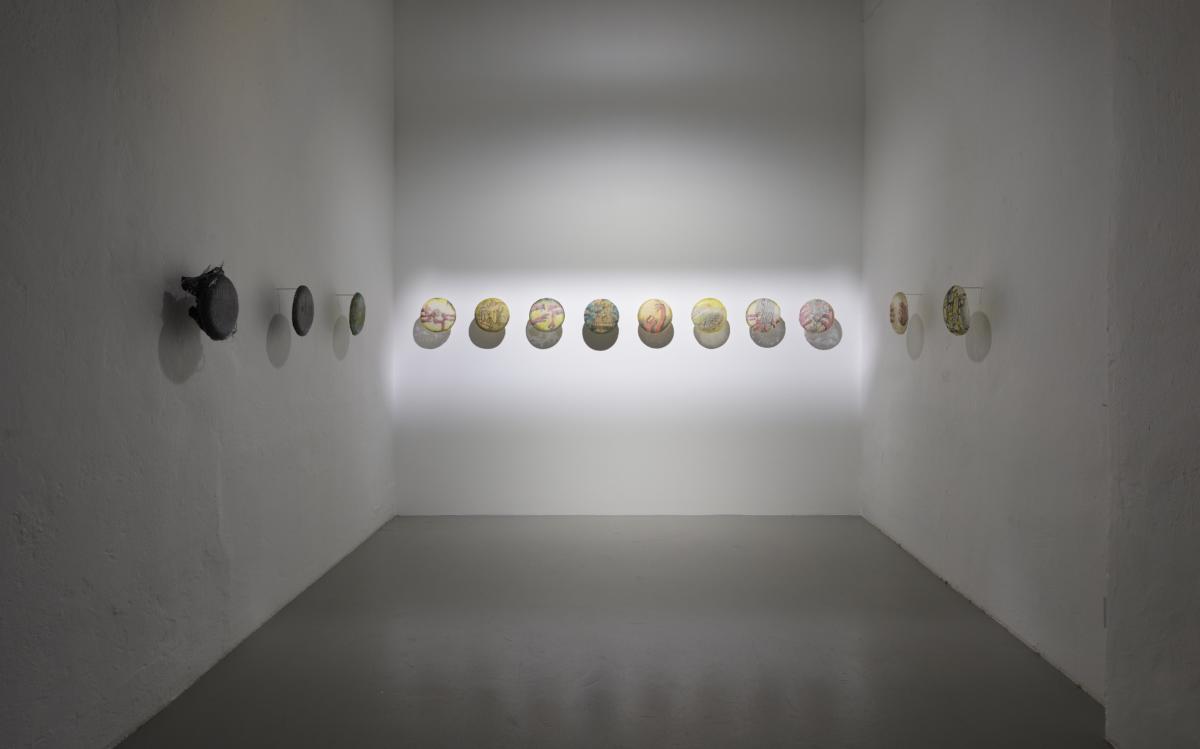 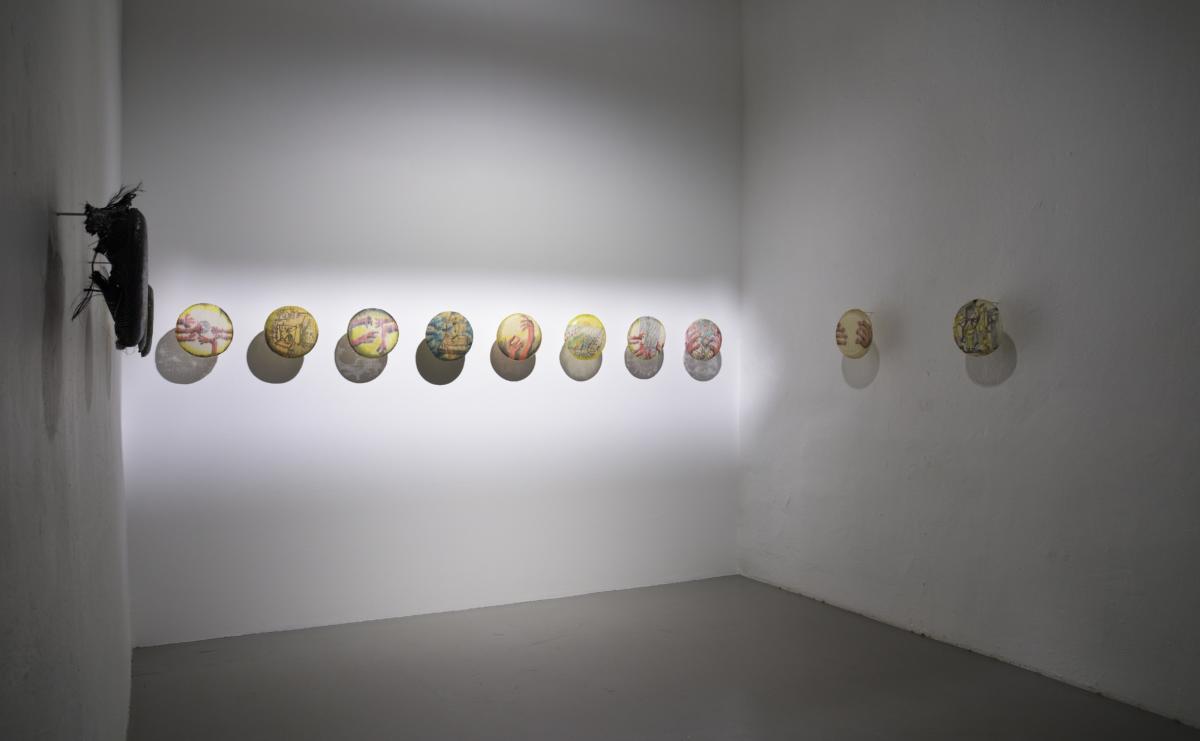 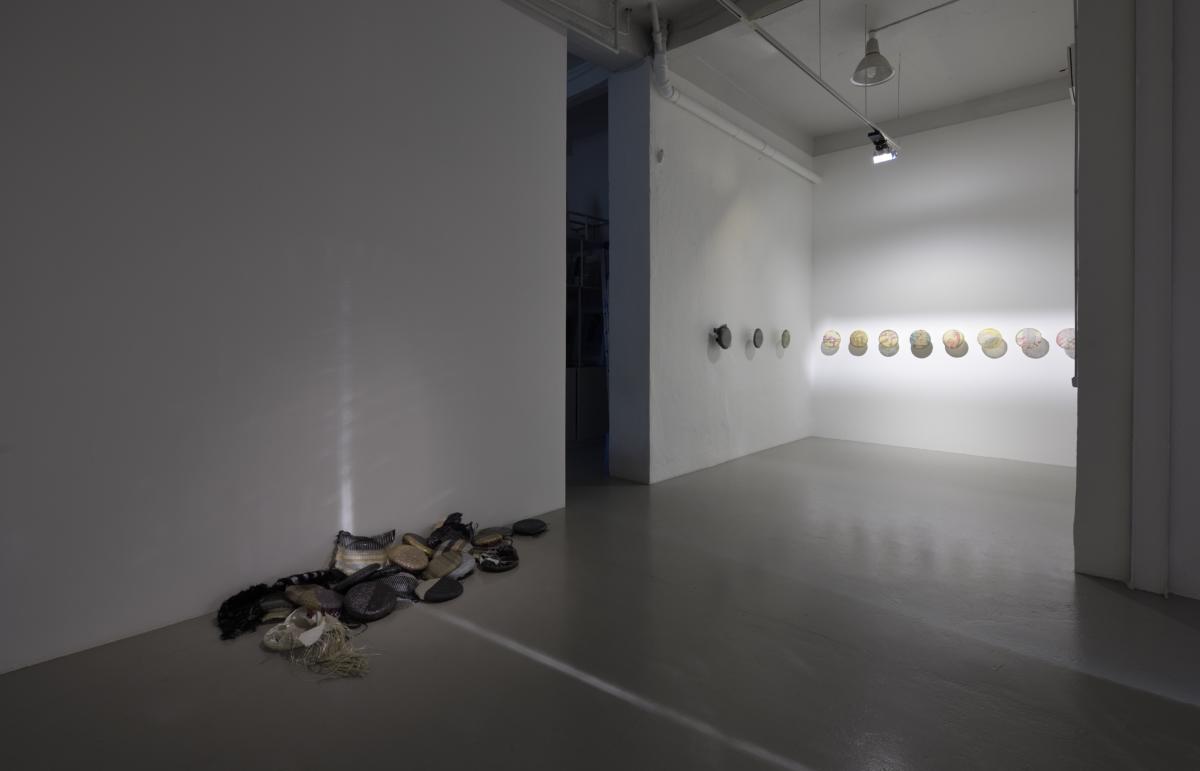 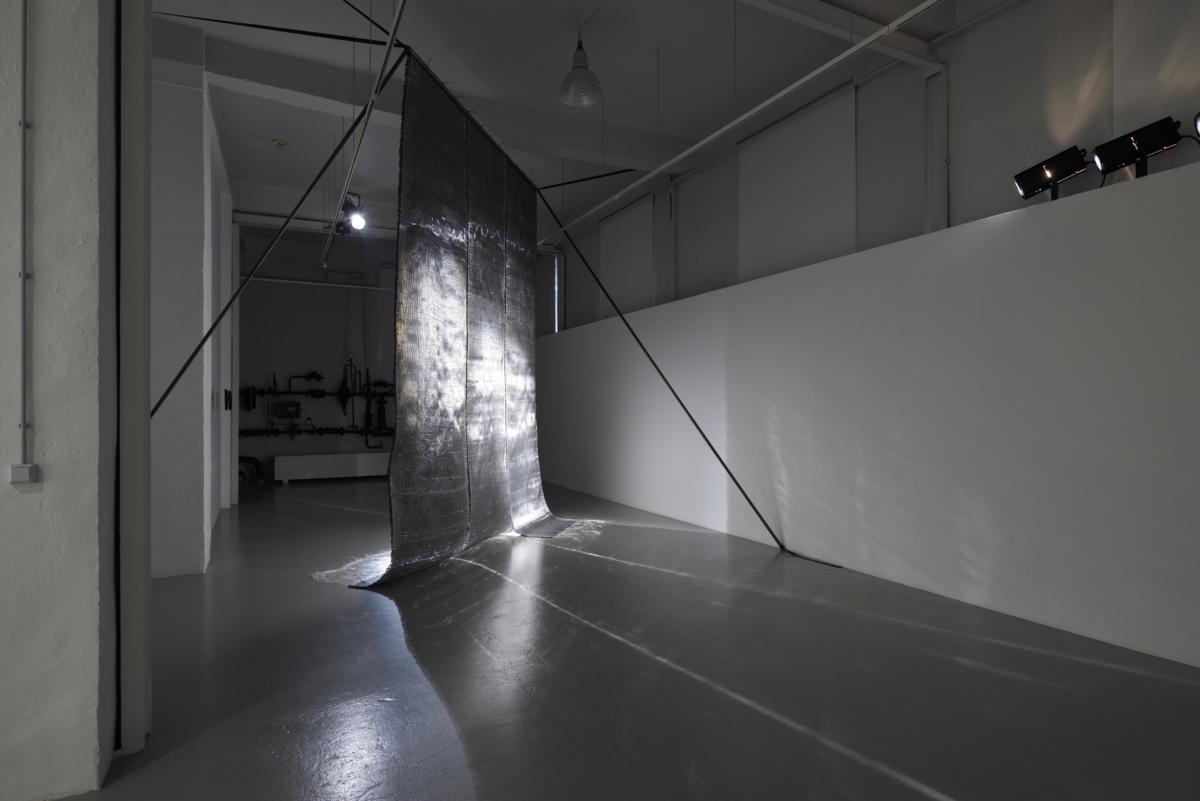 Developing the idea of shaping or saving something into a form, the artists continued experimenting with these materials, gradually introducing variations. A seemingly insignificant change in the thickness of a yarn, for example, produced very different results. These variations were then cast into a simple form of a Frisbee, a process of imitating by hand the creation of a mass produced object. Examples of these experiments are displayed in a pile behind the hanging fabric. Illuminated on a wall are also a few Frisbee versions hand painted on yarn. The pictures are meditations on the history of textile production: hands stretching the yarn, workers lined up by machines, a single weaver operating the looms. In these pictures, it is as if the act of weaving has been solidified, or the making of the exhibition has been “saved as” a form. 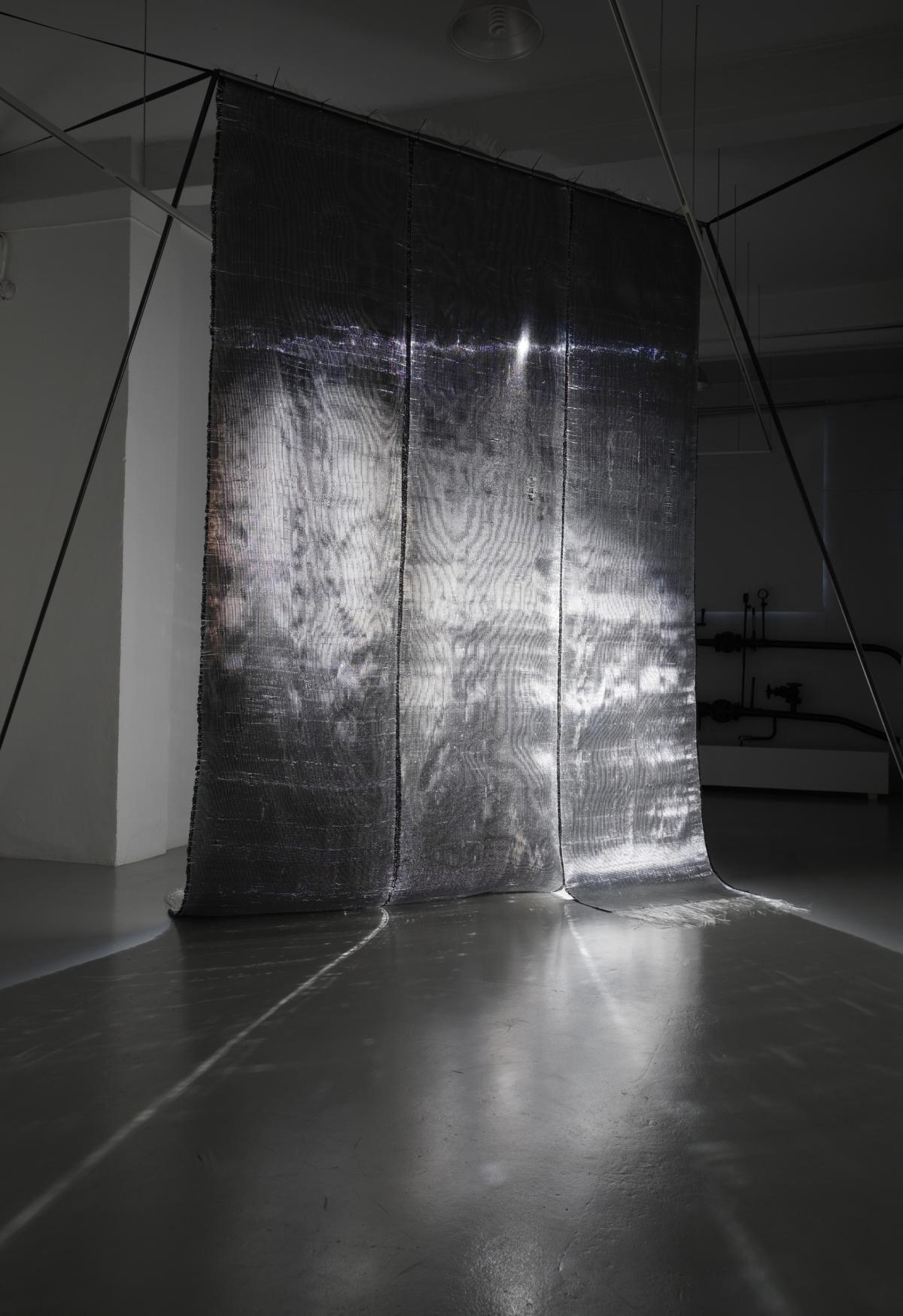 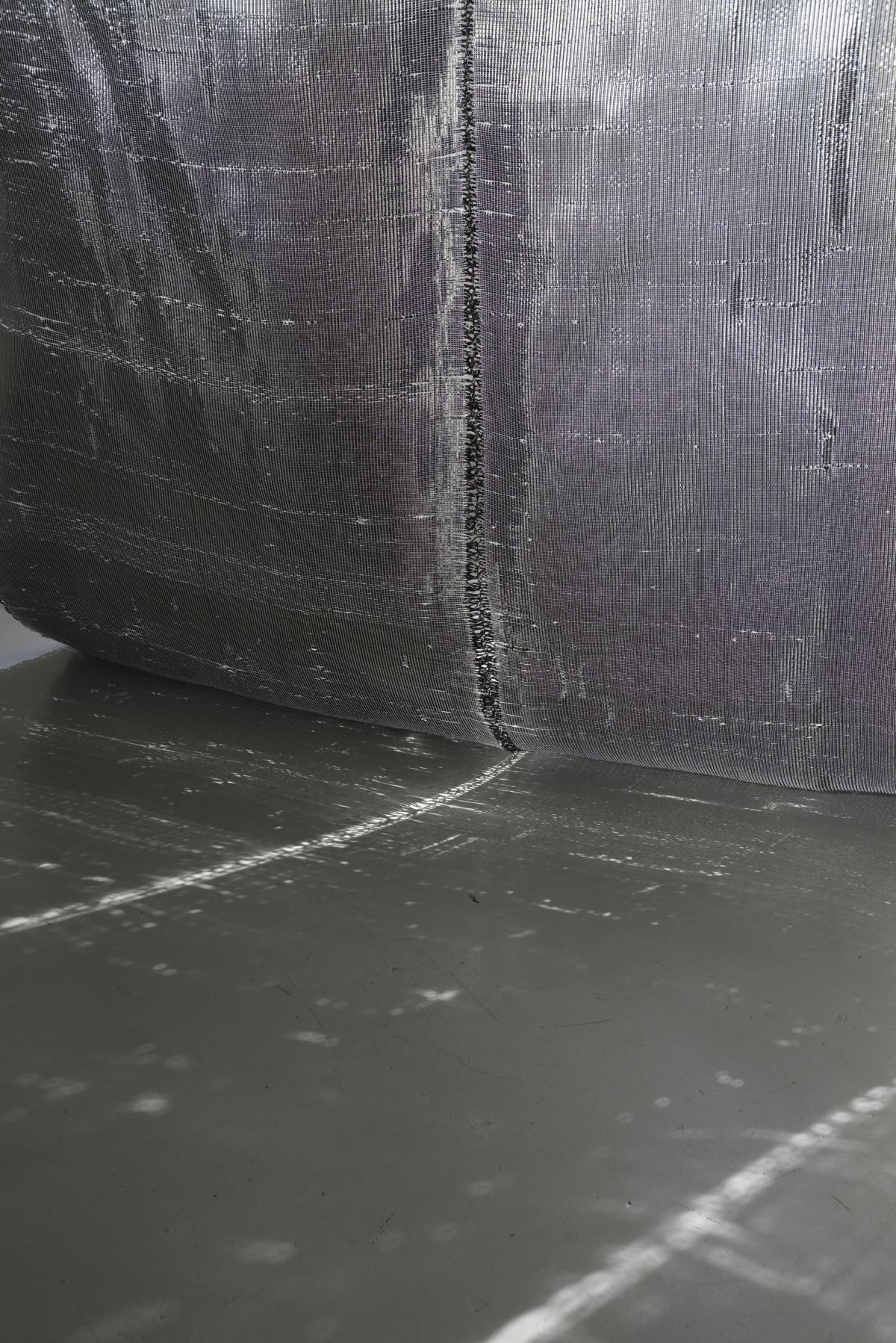 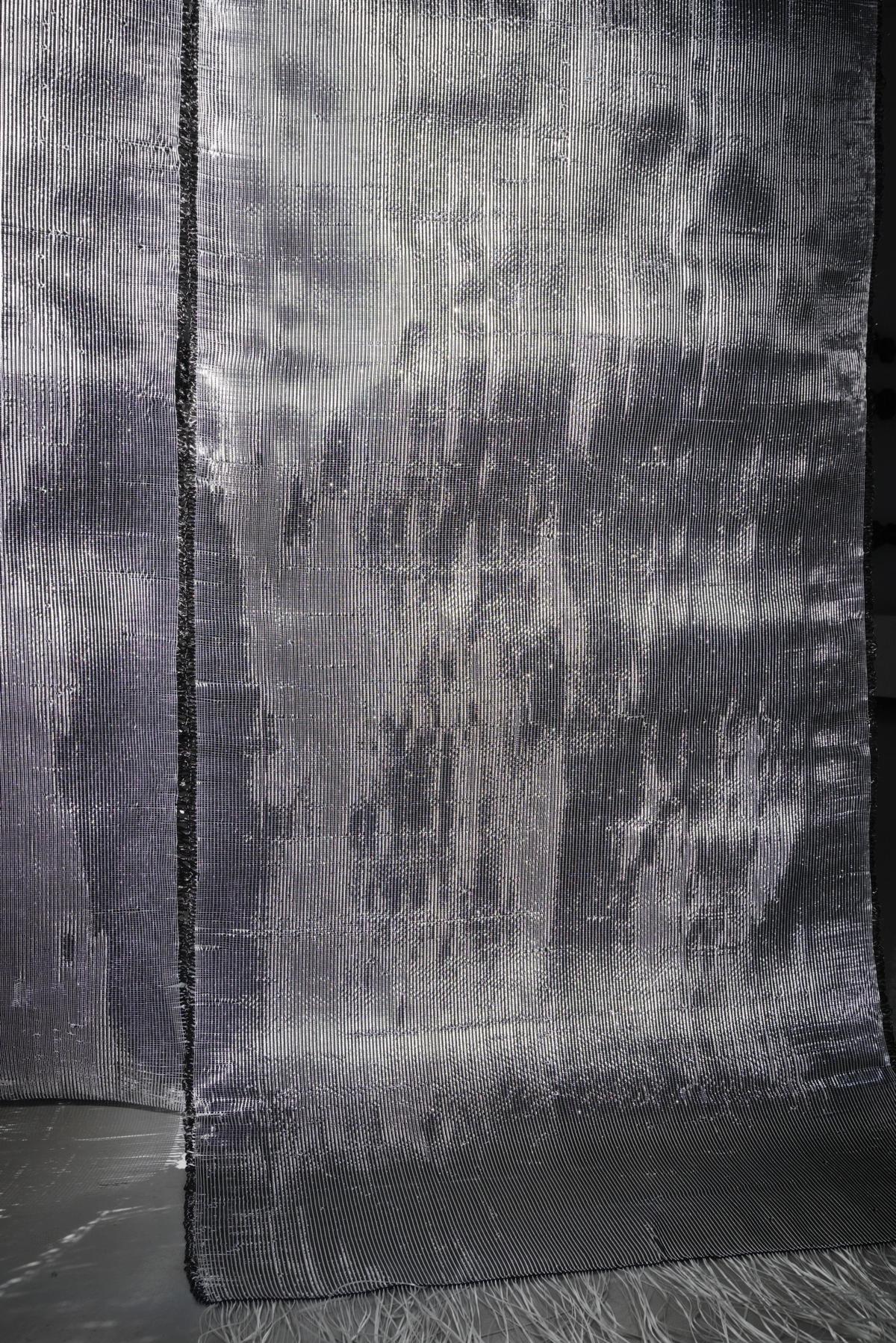 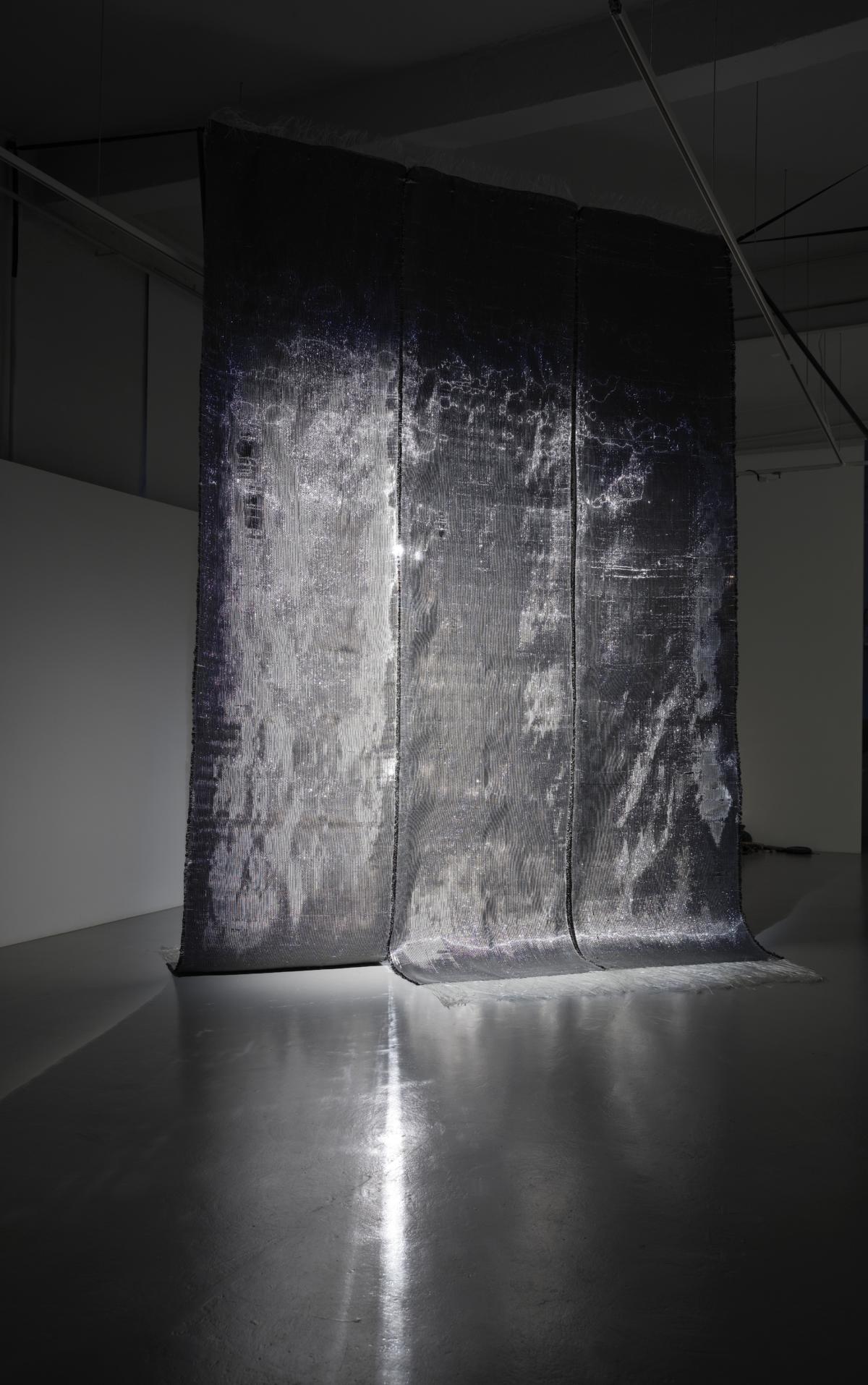