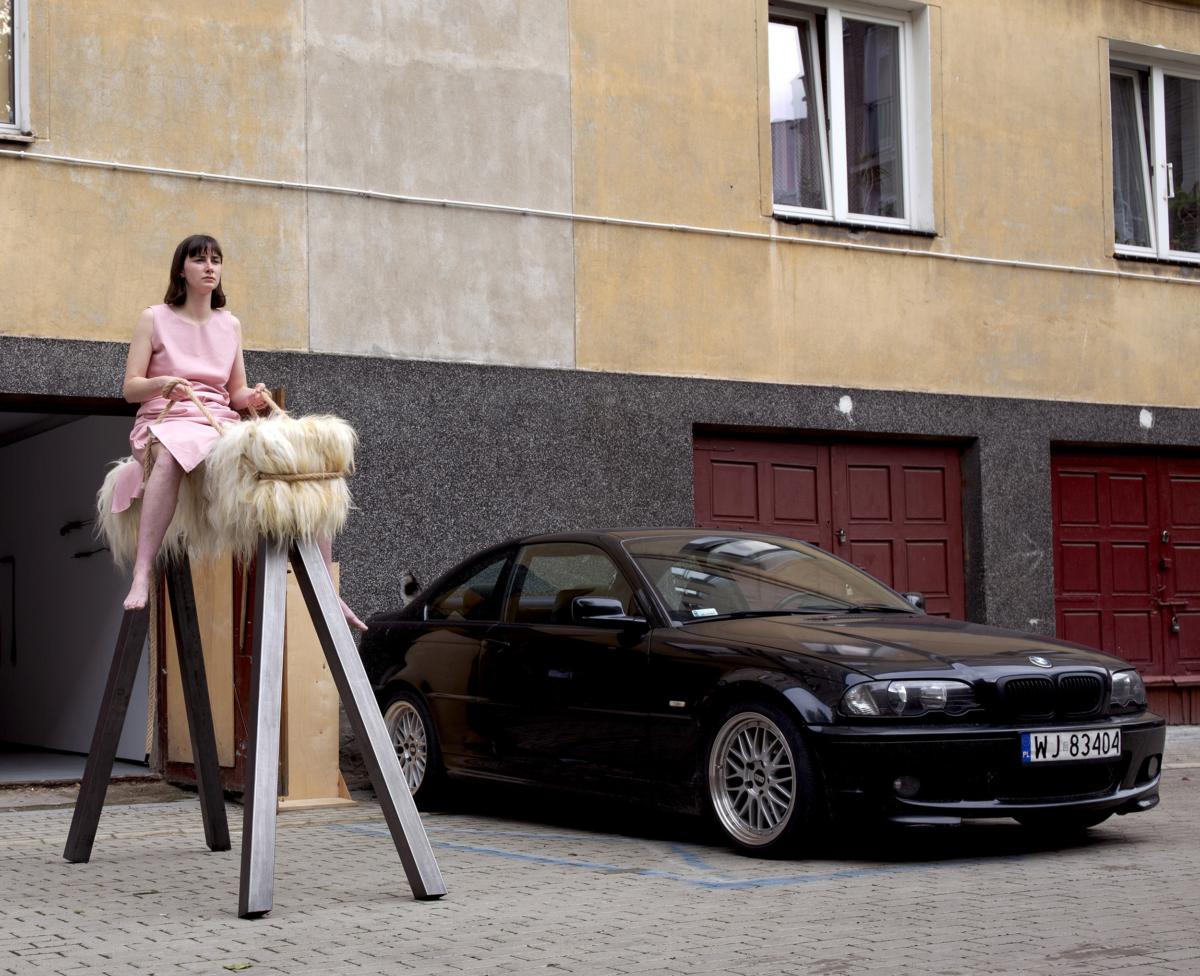 Kathryn Zazenski is a visual artist who utilizes installation, video, publishing, performative/experimental lecturing and collaboration to explore human connection. Her practice is informed by her work in fabrication, conservation/restoration, public speaking, through living in varied communities in Asia, Europe, and across the US, and research on the philosophical relationship between science and art. Katie has worked as visiting lecturer at Dartmouth College (2015, 2019, 2020), Rutgers University (2018), and the School of Form (2020) and is a two-time Fulbright Fellow to Poland (2016, 2017). Katie joined Norbert Delman in running Stroboskop in 2018 and in 2019 they welcomed Martyna Stołpiec to the crew. Stroboskop has been an independent, artist-run space based in a tiny garage in Warsaw since 2016. Hosting exhibitions, lectures, screenings, performances, workshops, and community meetings, Stroboskop has a mission of showing critical and experimental works and to being a platform for underrepresented communities; to provide greater visibility for perspectives not well represented in the local and national Polish art scenes, and to be a point of international connection and collaboration for artists, makers, activists, and thinkers, globally.

Absolutely. And still is.

Who has held you up?

The only reason that we can exist, why we would be necessary, is because of formalized institutions, galleries, etc., the entirety of the art and culture ecosystem as it stands. If the idea of being ‘held up’ is a supportive notion, then the three of us that are currently behind Stroboskop (myself, Martyna Stołpiec, Norbert Delman) do that for one another. We each have our role in the organism and adapt when necessary. We in turn exist through a network of individuals who believe that this space/platform is important, both locally and otherwise. We are held up by those that send us their half-used containers of paint. Those that let us borrow chairs, welcome us to host meetings and screenings at their establishments that have toilets and heat, that share their time and personal resources with us to keep this thing in motion. We are held up by the people that decide in one way or another that they are our community, and that we, together, are a community that takes care of one other.

Are you a link or a node?

A link is defined as a relationship between two things or situations, it’s a connection/a connector. A node, on the other hand, is a point of intersection or a site of branching. We are both. I don’t know if necessarily simultaneously, but we have this flexibility afforded to us through our lack of having to adhere to one formal structure. This doesn’t mean that we lack a structure, but rather that we can really embody a more liminal space. We can be at once connector, site, platform, instigator, observer, shelter, amplifier. At first it became difficult to define the boundaries between my own practice and my endeavors @ Stroboskop, but what I’ve realized in these past 2,5 years is that for me, that distinction no longer matters. And I think it is this point that really makes spaces like ours inherently both—we are working artists that exist within this nebulae of work/life/practice where everything is mixed together and it doesn’t really matter where things shake out. The only thing that does matter is that the critical ideas are being discussed, the projects and artists are being shown, and that we’re filling a gap in an otherwise closed system.

Some kind of no-strings-attached, six-figure (USD or Euro) donation that would allow us to invite artists from the US, Asia, the Middle East— or at least safely transport their work because lets face it, who knows what the future of travel/border crossings will soon be. I would love to give a stipend to our artists. Some account to pay the rent, our hosting fees, a few złotys for the wine at the openings, the hand sanitizer, the paint on the walls. We’ve talked about setting up an exchange, a residency program even. If we were able to relax a little from our own personal funds then we would more free to better support others, to make a small dent in wealth redistribution and giving back something other than a social media bullhorn. But fantasies aside, need is not something we really spend a lot of time focusing on. Instead, energy goes to figuring out how we can make things happen with what we have. What we might lack in capital is compensated for in community support and the ability to problem solve, to use what we have to create what it is we might need. 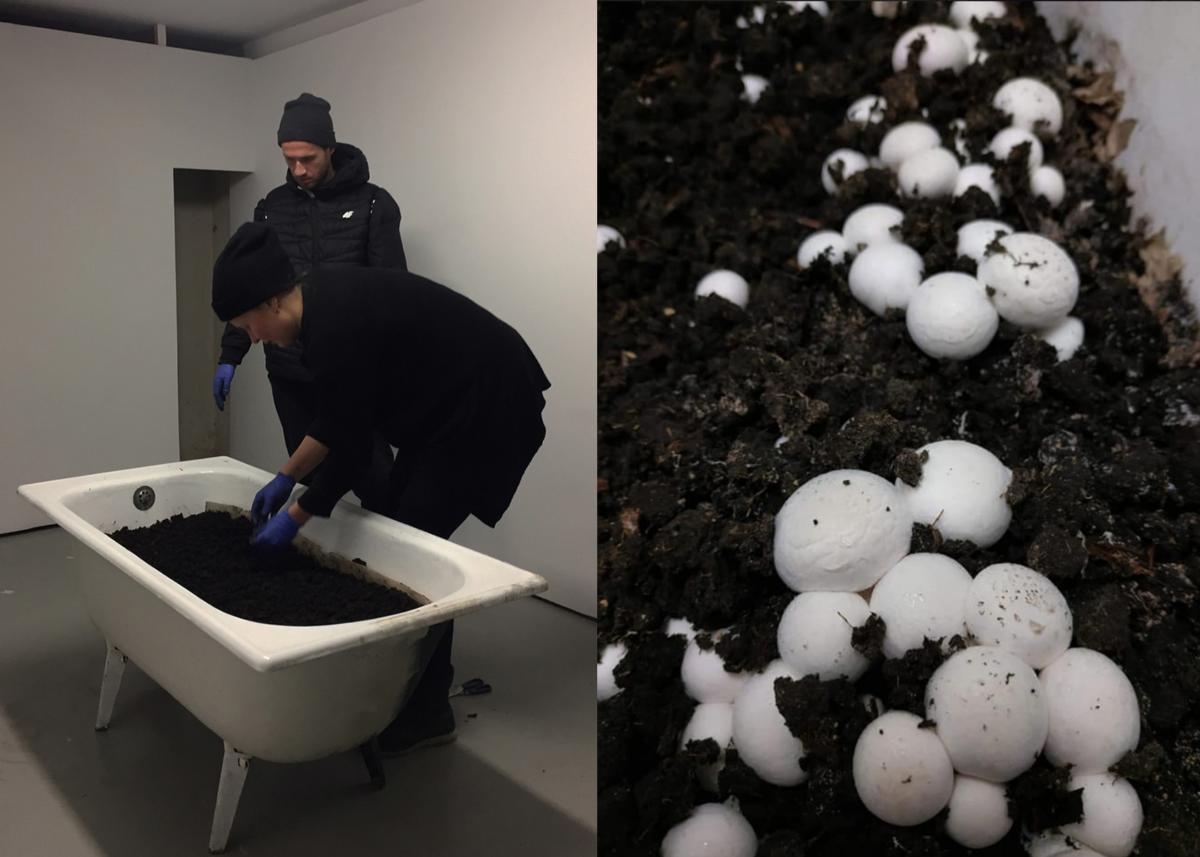 Both structures are elemental to who we are and how we express our programming. Our digital platform allows us the ability to connect to people despite geography, politics, economics, pandemics; through abstracted images and texts and fragments of information. Since the lockdown we, together with the activist group based in a local działka, SAM Rozkwit, produced an exclusively online community to accompany our in-situ collaboration (growing mushrooms in a bathtub placed inside Stroboskop). Spring Fling became this episodic conversation that took place over the course of about three months and ended up featuring artists and activists from Poland, the UK, and various spots across the US. What now is lumped within the countless other projects developed during this (still active) pandemic, was an attempt at/exploration of community, connection, generosity, and relevancy; it was an exercise in a more lateral, inter-, rhizomatic, community structure. While the digital collaborations invented themselves, from March 20-May 15 we produced three crops of pieczarki (Agaricus bisporus, or the common white button mushroom), some of which are still sitting in our freezers, prepared for communal consumption when it becomes safe again. The rest of the lot were given away to people who needed a hand. The physical site locates us in time and space and allows us to satisfy this very human need for connection, for the synergy and otherwise nameless energy exchange that happens when you go to a place to see art, or hear a talk, or listen to music, or otherwise have your presence in the world verified. While the physical site is critical to our organism, it is something that we do still recognize to be fluid and capable of change not dissimilar to the digital organism. 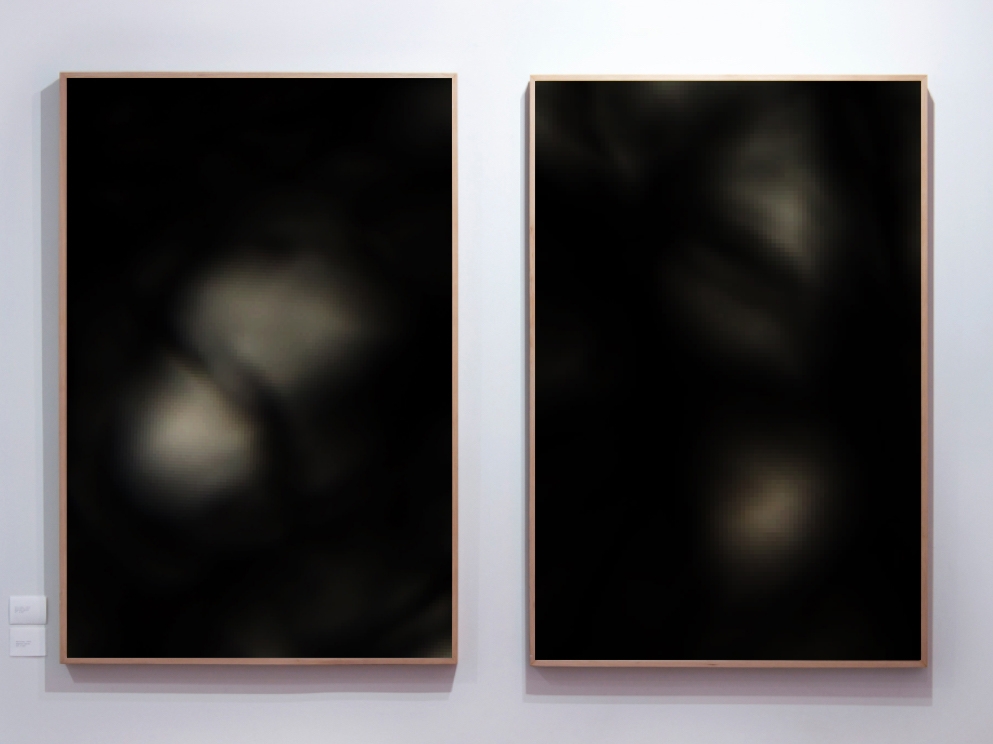 What are the known unknowns?

I think the known unknowns relate to a (collective) inability to face change, especially in the face of comfort or convention. Those in positions of power (for sure me/us as white, heteronormative folks carrying American/EU passports), who often have the luxury of rest when we perceive stability/stasis. So somehow I think it lies in this willingness to do it anyway; to build the thing, to have the conversation, to show the work, to face the shit, to take the risk, all the while knowing that it could be the wrong call but at the end of the day it’s all provisional anyway… 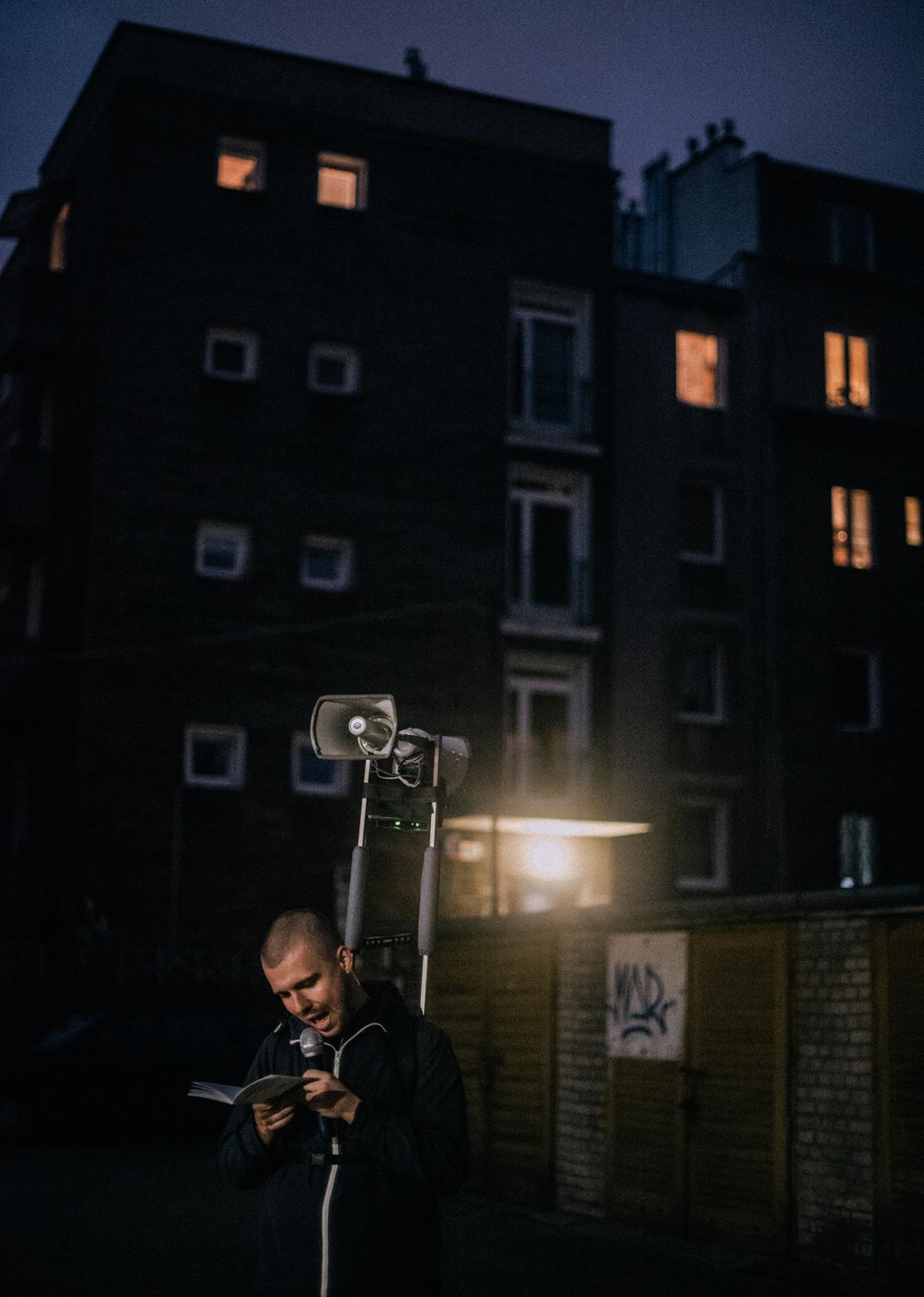 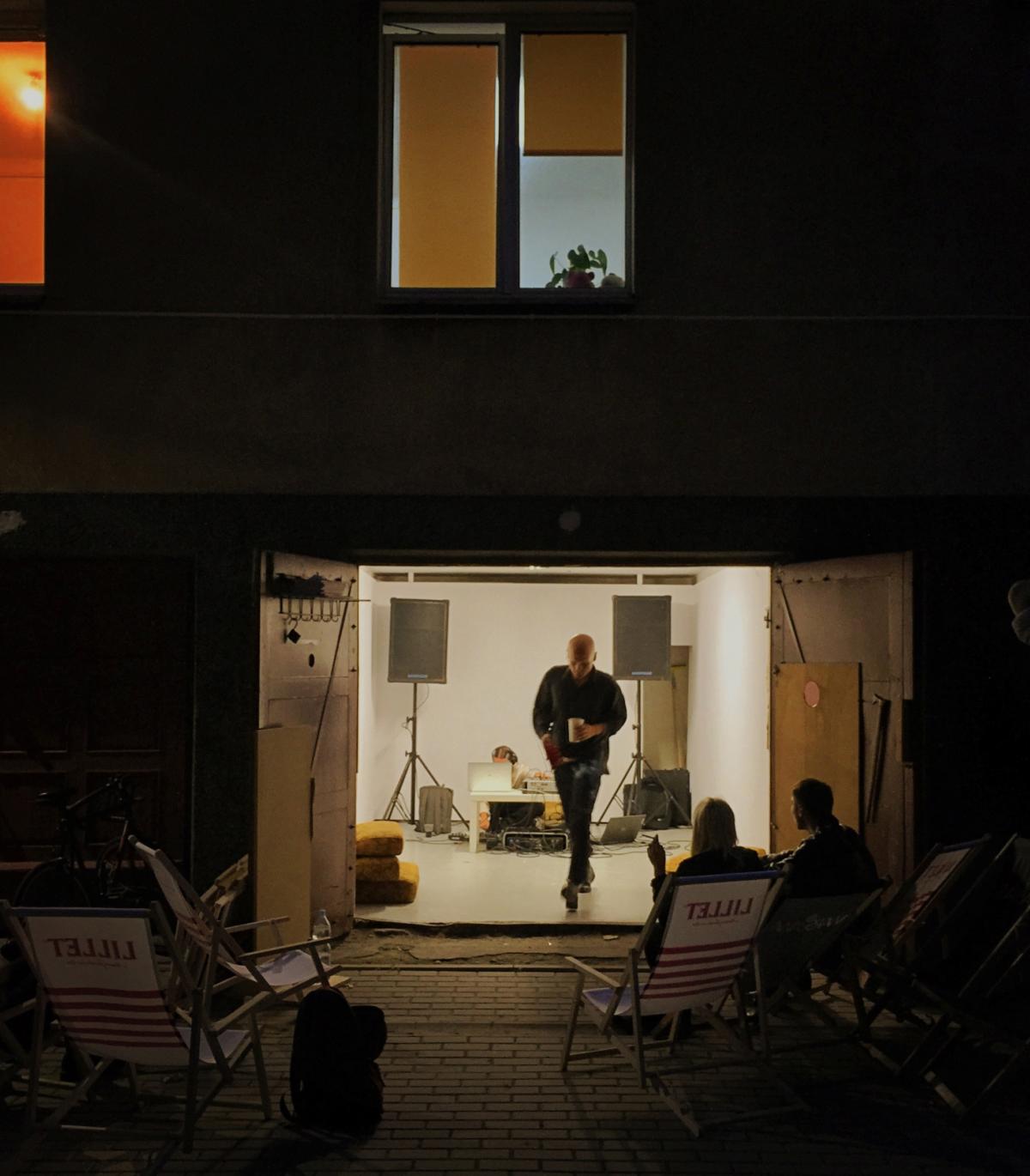 What time is it?

Right now feels like a pretty critical time in this little organism, a time where we need to reflect on what is most important for us: being a site for experimentation, a platform for underrepresented voices and perspectives, an alternative to that which lies cleanly with the organized system for how spaces are run, the functions they/we serve, and the transactions they/we perform. As an artist-run/project/off-space, we have this ability to serve different communities and functions simultaneously. We can be a space that shows critical art works regularly and also hosts/promotes meetings or happenings or workshops that focus on the most critical political, climatological, social, biological issues at-hand, even if they boil-over overnight. As a non-institutional space we don’t necessarily want to exist in one space and reject the notion that our inability to be easily quantified or characterized is a fault or lack. We find it comfortable to pass between, to create new forums and ways of being, to embody many seemingly disparate segments. It makes platforms like ours uncomfortable to describe and difficult to define bureaucratically, and perhaps also frustrating or easy to dismiss for those who do not live by this nature. It’s time to find radical comfort in the notion of change, in the radical knowledge that the binary is too flat, too reductive, too rigid, to encompass nearly anything perhaps outside of coding.

Is it an animal, vegetable, or mineral?

My first job in fabrication was in a stone atelier: marble, granite, limestone primarily, occasionally something exotic like alabaster, onyx, or calcite would come thru. I was mentored by a woman who became a dear friend, she taught me how to sense, to observe and respect, the material life. So definitely, we’re in that vein. Maybe Stromeyerite, or Strontianite, or maybe Spectrolite…

Now: a sticky little concept, something that I fight with personally, constantly, something that makes being part of a small team really necessary. Perhaps its my innate Americanness, or maybe it’s more closely linked to my Chinese zodiac (dog), my horoscope (Gemini) or birth order (eldest child), who knows. Either way, I feel a deep need to do everything now and am often frustrated by time, administration, or some other kind of ‘restriction’/kink in the chain. Because now becomes then in the blink of an eye and will be becomes is, or is not. Thankfully my collaborator @ Strobo is the balance of this. More often than not she provides the steady, measured, longer-term perspective that keeps us from reacting when it’s not critically related to our goals as a space. 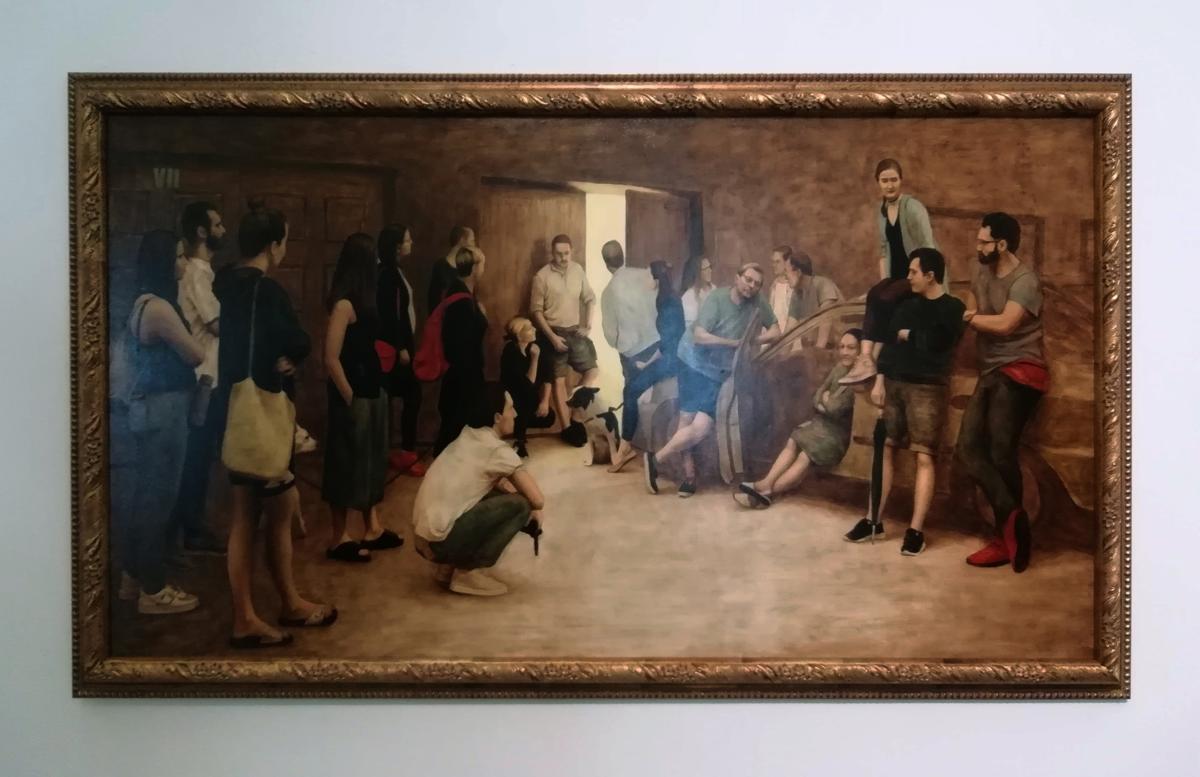 "Night of the Exhibition" at Stroboskop, painting commissioned for "Waiting for Another Coming", a group exhibition between CSW Zamek Ujzadowski and CAC Vilnius, 2018 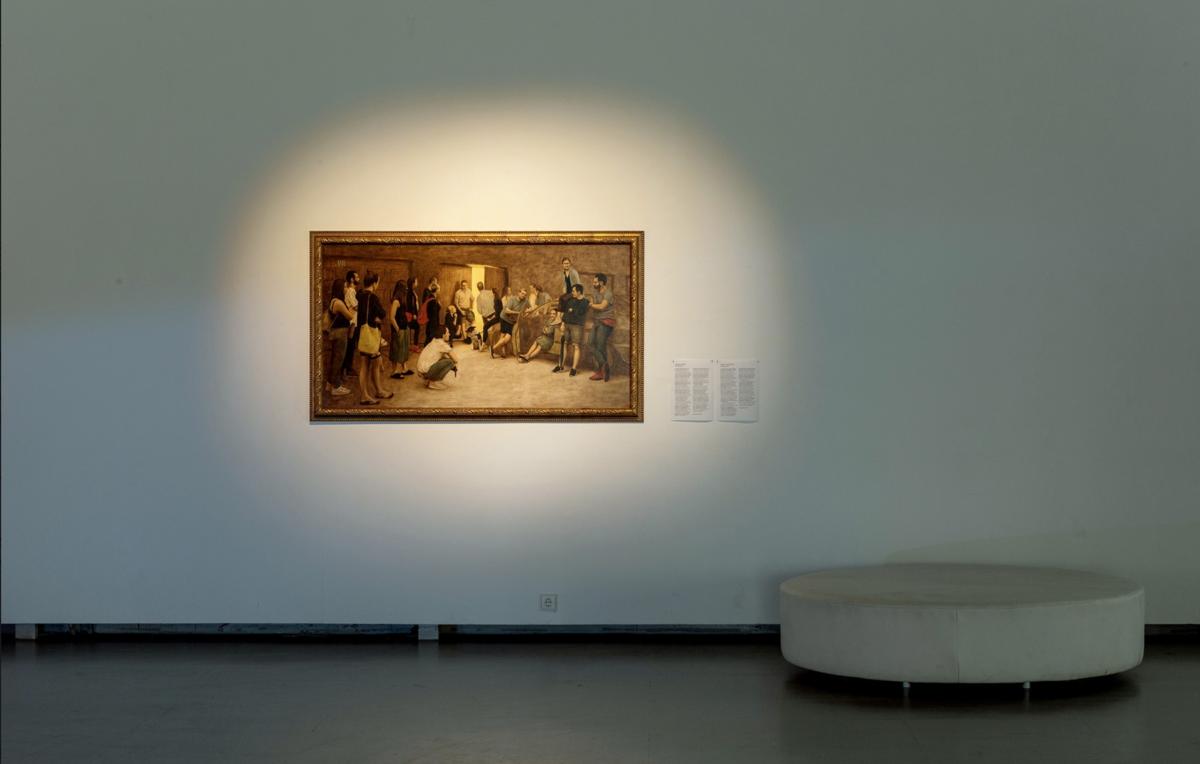 "Night of the Exhibition" at Stroboskop, painting commissioned for "Waiting for Another Coming", a group exhibition between CSW Zamek Ujzadowski and CAC Vilnius, 2018

And what about the unknown unknowns?

As much as we can be but it’s daft to assume that it’s even really possible to begin with.

What were you given and what did you take?

Stroboskop’s first opening was in May of 2016. In mid 2017 I was given the opportunity to become a part of this place, at the beginning of 2018 I formally accepted. I was handed an existing space, network, and community, and was given the chance to develop a new future for all of it. I took this as an opportunity to expand my own personal practice which in some form or another has always centered on communication and connection. Selfishly, this platform became a way to bring the disparate communities together that I already had engaged with or wanted yet to establish a dialogue with.

Sometimes simply existing is enough and sometimes it’s not. I think right now it’s not.