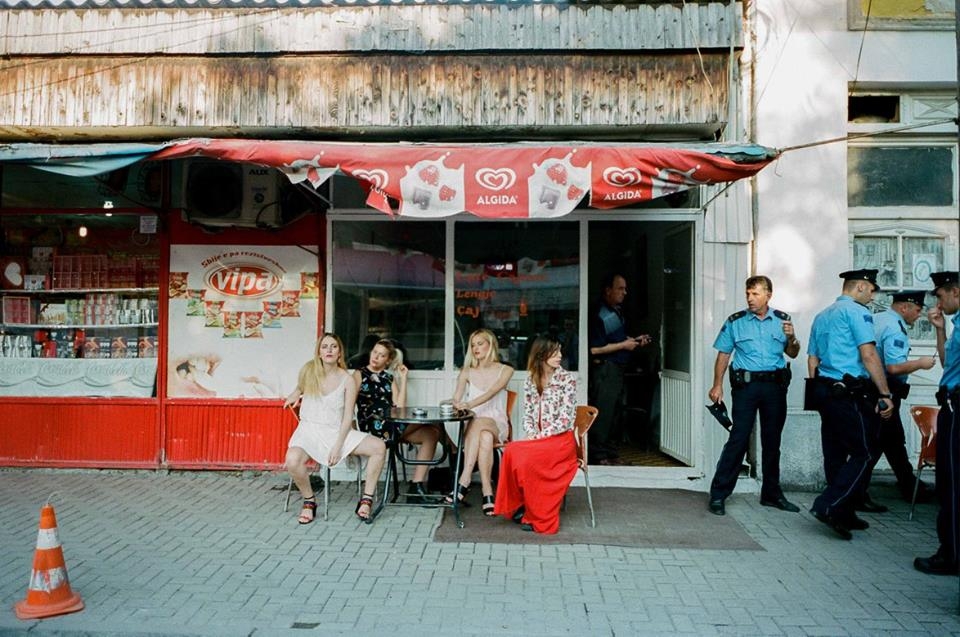 HAVEIT is a collective comprised of two pairs of sisters who stage public performances in order to tackle the overrepresentation of men in public space, to “make [their] lives less boring,” to protest violence against women, and to promote social change, humor, affirmation, and emancipation. The collective has existed since 2011. Together they consequently and elegantly voice discontent by making actions in the public space, like washing their bras and underwear in one of Prishtina’s fountains or staging a public kiss between two women.

Do you think the public space in general, and more concretely in Prishtina, has a gender?

Public spaces in Prishtina are open and accessible to everyone, even though they are used mostly by men. On the other hand, private spaces are rather associated with women, who take care of the house and children. We pointed to this divide in one of our performances, where we polished people’s shoes in the street, a job that is publicly done by men outside but only by women at home. We brought a private job from a household to a public space, which is meant to be a space only for men for different reasons. Public space used to have a male gender and maybe it still does but we and other artists are trying to change it.

How would u describe Prishtina public space historically and today? Historically public spaces in Prishtina were used for political demonstrations, protests etc, and most of them were dominated by men. They were also used for meetings, gatherings and in most of them women didn’t participate. When we did our first performance, we understood the meaning of owning the street. From the moment we performed, we experienced it as our home, for the first time we weren’t scared of the reaction and weren’t scared to put our bodies out there and to create a connection with the streets of our city. Nowadays the public space isn’t used only for demonstrations and isn’t used in the classic form as it was before, today public space is our performance ground, it’s a space for LGBTIQ gatherings, for protests against domestic violence. Slowly, we are using it to raise our voices and to show our art.

How do you feel in it on daily basis?

We see public space as our space, and the best thing about this is that we do not divide it anymore as public or private. For us it has become a performing platform which to tell a story, or a problem.

Most artists care about exhibiting in galleries, your galleries seem to be the streets, why?

The reason why from the beginning we have chosen the streets, it’s because of the accidental and unexpected nature of our performances and also because we want to address the larger, not selected audience. The street audience is an honest audience that either loves you or hates you. It differs from that of the galleries because they did not choose to go to the gallery, but they happened to be on the street when an artistic performance occurred in order to react to injustices or the collision of realities. Of course, we want to exhibit in the galleries as well, but since we wanted to touch a bigger audience, it’s much more challenging to do it in the streets as unfortunately in Kosovo only selected people go to the galleries.

How can art be a way of testing tensions in the public space?

Our performances naturally test so-called archaic values of our society. Actually, you need to be an independent woman who can live her life freely in order to be able to test the tension in the public space. In the society we live, it is quite easy to cross the line and make a test. For example when we performed a kiss on a Valentines Day, people were angry at us. They used a very violent language towards us including death threats. In this way you better understand the opinion of people and also the true beliefs of people you thought you knew.

Kosovo is predominantly secular Muslim society, how does it manifest on the streets?

This is not a religious problem. Streets around the world are proving to be deadly for women, irrelevant of the religion or the beliefs of the society of that land. Just last month in London a police officer admitted to have killed a woman. A uniformed man who took a vow to protect everyone in a society. As Hilary Clinton famously said: Women’s rights are human rights

The real issue here is the systematic discrimination, inability of justice system to be just and accessible to every citizen. A safe public space means a better education, equity pay, equal opportunities, regardless of beliefs or personal interest. Why did you wash your bra in the city fountain?

“No Water, Fountains Everywhere” was one of the first performances that we did in 2013. The intent was to highlight the irony of a city, which is constructing public fountains all over town while its citizens deal with continuous utility cuts, and interruptions of the residential water supply.
We washed our personal clothes such as dresses, underwear and our bed sheets. We had hard time with water cuts for more than 13 years and that’swhy we choose to wash our clothes in a same way women used to do so years ago. Washing bras and panties in the public fountain with water running, was an intentional act taken from our homes out to the public.

And why did you publicly kiss?

We kissed each other to protest the moral and the way this society treats same sex love. It was two days before Valentine’s Day in 2013 and we were part of a heated debate in one of the cafes in Prishtina. We were talking about Valentine’s Day and how pathetic it is. At the same time how hard it is for LGBTIQ+ to express love publicly to one another and somehow, and in our country they might feel that they don’t have the right to be part of the society. That’s why we decided to do a picture in the middle of the main street in Prishtina. While kissing we felt the hate of people walking by. But we had no idea how much impact that picture would have. The minute it was posted we started to receive a huge amount of comments mostly spreading hate, but we also had comments of love and support. The death threats we got, only inspired us to use social media as a platform to test and understand our society.

What would be a more female, heterogeneous public space?

There are a number of different global studies that stipulate the well-known fact that public spaces are still a long way from being gender-neutral areas. More female heterogeneous public space would be a space safe for women and LGBTIQ community. To achieve this, technology is an asset, but the truth is, that the only way space will be safe is with better education, an open and comprehensive programs in schools about human rights and women’s rights as such, accompanied by a fair and effective justice sector that would not neglect women’s call for help and protection. And how can art help in this process?

We want to challenge the stereotypes. For such a long time women were not able to speak their mind. A man’s perspective was used not only to create public spaces, but also to “decide” what a “good and respectful women” is or is not allowed to do in a public space. By stating the obvious, art will shed some light, and through art we want to tell everyone that we want our voices back, we want to empower other women to speak truly and freely their minds.

What is for your a healthy relationship between art and activism?

To be aware of what is going on, to raise questions, to be careful with your statements. To be brave, loud and clear. It is as well important to not feel an obligation to talk about everything. We try to be part as much as we can in issues that we think are important to be talked more, but we think the honesty in this relationship is being real on that you feel and care. How does the fact that you are sisters influences the forms of kinship and collaborations?

The fact that we are sisters has pro’s and con’s but being in a family makes it easier to keep in touch. We also know pretty well how we feel and what we are going through, so we are sensitive on how it will reflect in the work. At the same time we can take care of each other since a lot of what we do deals with issues that affect who as individuals, and also what we choose to highlight. We help one another in a personal level also.

Founding Haveit has help us to shape who we are, being together helped us to articulate the ambition and a motive to deal with issues and problems. We probably would not have that same courage to do it on our own.

Also the fact that we are so close makes it easier to be more critical of each other. We simply can’t be polite when we think an idea is problematic. Also we do a good job on not being subtle with our mutual reactions, and we always try to challenge ourselves to go there where it is not that safe.

During the 3rd Autostrada Biennale at the café Pintolli Mill in Prizren, you exhibited photographs documenting your visits to the traditional tea houses in Kosovo. Additionally you staged a disrupted tea drinking ceremony. Can u talk about tea in your lives?

Drinking black tea has always been an integral part of our lives. We start drinking tea and learning to make and serve it when we’re just children. Serving tea to your parents is every girl’s duty. While we make it, serve it, and drink it in our homes, we could not comfortably do so in tea houses, as they are predominantly occupied by men. Those photos, featuring four women in colorful clothing, show us taking our time and space in male-dominated cafés. We try to reverse the gaze and ask how public space could be more accommodating to women. At the opening we staged a tea ceremony that went wrong. Additionally we waited for guests to arrive over an hour. We waited and waited, and then we were ready to spill it.

HAVEIT is a collective founded in Prishtina in 2011. Facebook page: https://www.facebook.com/haveit