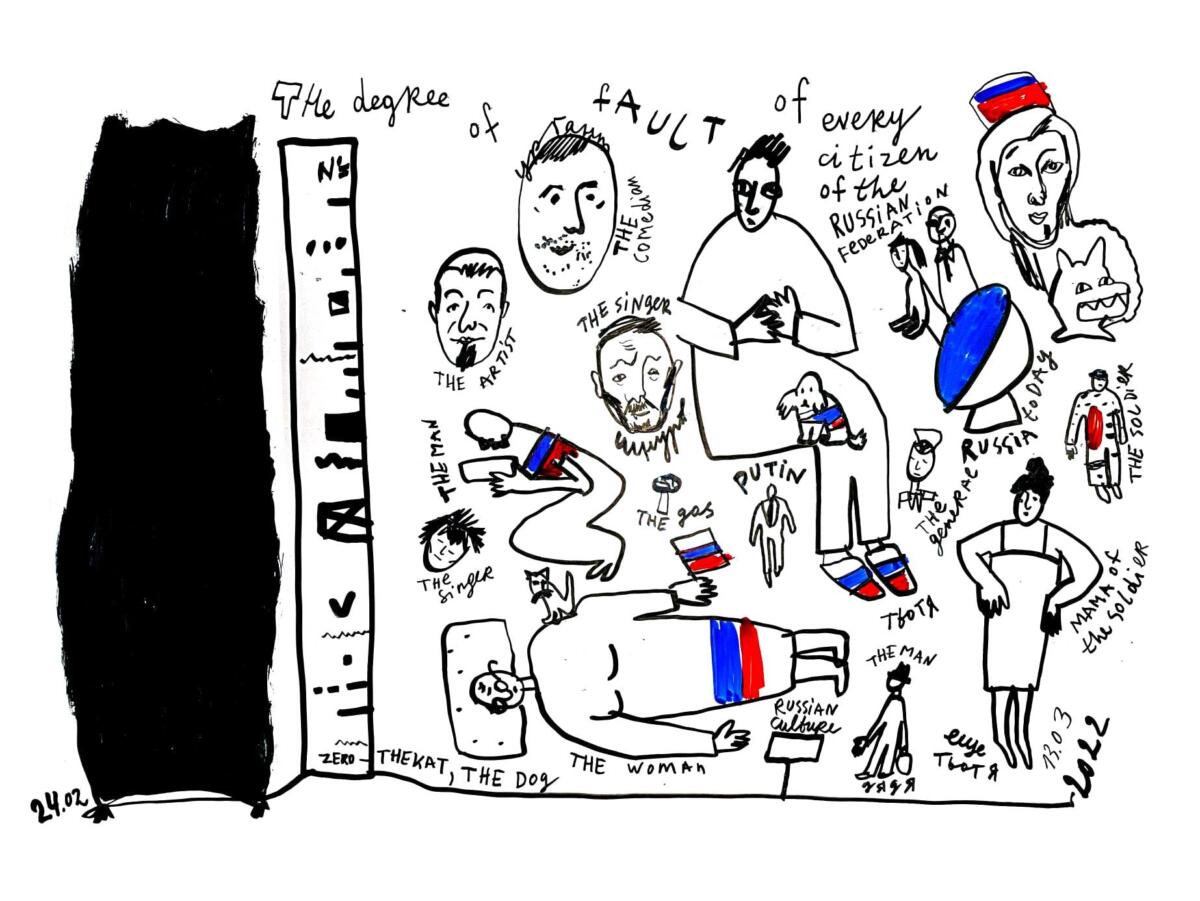 It was already the second week of the full-scale Russian war against Ukraine when one of our Western European friends, a well-known artist and curator, reached out: “Hey Lia, how are you? I’m going to organize an antiwar exhibition where Ukrainian and Russian artists will be presented together, protesting against Putin and his war. I need your help on this one”.

He was surprised and disappointed by my immediate negative response. After a long conversation, it became clear that it was impossible to explain to him what was wrong with the “Ukrainians and Russians standing together against Putin and his war” approach. I felt helpless seeing how all my arguments have failed to change his mind, and that he was clearly repelled by my stance. “I’m trying to understand you, but I completely reject the idea of nationalism”, he wrote. Later that day when I met with my Polish colleagues I was still shaken up. I told them about this dialogue and they reacted the way I knew they would – to them it was obvious what is wrong with this type of joint events in times of war.

On one hand, the full-scale Russian military invasion of Ukraine, has attracted a unique amount of attention to Ukraine from all over the world, but on the other hand, it has already been demonstrated that this attention does not necessarily come with the ability to hear and to understand. The war has unearthed the problem that should have been addressed a long time ago: in the whirlwind of statements on the war in Ukraine, not all voices are heard equally. Even today, the hierarchy of the rights to exercise agency still reflects the colonial narratives, and it results in the unpreparedness to accept Ukrainian voices as equal. Let us go back for a moment to the CBS reporter calling Ukraine a “relatively civilized, relatively European” place[1], where one wouldn’t expect to see a war happening, in comparison to Iraq or Afghanistan, where the conflicts have been going on for decades. Aside from the openly racist nature of this commentary, it suggests that military invasion can only happen to the “uncivilized places”, thus paradoxically stripping agency from the society that is invaded.

But if Western colonialism and entitlement have been thoroughly analyzed and described over the last forty years, and the necessity of applying decolonial approaches when discussing relationships with the so-called West is no longer perceived as controversial, the understanding of Russian culture as imperialistic and colonial in its nature still remains a rather marginal line of thought.

Ewa Thompson in Imperial knowledge. Russian Literature and Colonialism [2] notes that in Russia, the process of deconstruction of the imperial myth didn’t happen because it was believed that Russian imperialism was a question of the pre-communist past. The postcolonial discourse focused on former Western colonies and the support they were receiving from the Soviet Union, not on the similarity of colonial practices of tsarist and soviet regimes. After the dissolution of the Soviet Union, the joy of seeing tyranny fall forced many smaller issues out of public discussion and the heritage of Russian colonialism in Russian literature and culture evaded criticism altogether. Russian literature had created a strong non-colonial image in the perceptions of western readers. Other voices were seldom heard – and if they did surface, they were easily dismissed.

Centuries of destruction of Ukrainian culture remain totally out of focus. The exact name used by the colonial power in each of those episodes of repressions is of little importance, be it the Russian Empire, the Soviet Union, or the Russian Federation. The important thing is that the attitude of this entity towards the Ukrainian national project was the same: its very existence was not allowed. And to ensure this, all means were used: from the prohibition of the use of the Ukrainian language to the physical destruction of its speakers.

Let us recall the Valuev Circular of 1863, which stated that “a separate Little Russian language [as they used to call Ukrainian then – L.D. & A.D.] never existed, does not exist, and shall not exist, and their tongue used by commoners is nothing but Russian corrupted by the influence of Poland”, and the Ems Ukaz which completely prohibited the use of the Ukrainian language in open print in 1876.

Let us also recall the man-made famine of 1932–1933, orchestrated by the Soviet regime, which caused the death of almost 4 million people in the territory of Soviet Ukraine. Neither Putin’s speech preceding the invasion (where he stated that the very idea of Ukrainian statehood was a fiction), nor the invasion itself are something new or unseen – they are merely the next steps in a long history of the Russian colonial s perception of Ukraine and Ukrainian culture as a threat that has to be destroyed.

Regardless of this, there are still numerous voices, especially among the “westerners”, calling for the separation of Russian culture from what they call “Putin’s aggression”. One of the most illustrious examples of such shortsightedness is the open letter by PEN-Deutschland, which explicitly states that “the enemy is Putin, not Pushkin or Tolstoy”, and in regard to the calls for boycotting Russian culture notes that “іf we allow ourselves to be carried away by such reflexes, by generalizations and hostility against Russians, madness has triumphed, reason and humanity have lost”[4]. Thus, not only does this statement infantilize the whole of Russian society and redirect the guilt of warmongering onto a single person, but also, on a larger scale, it seems to completely ignore the fact that precisely Pushkin and precisely Tolstoy – among many others – were vocal promoters of the Russian imperial myth and colonial wars.

The historical lack of understanding of Russian culture as imperial and colonial by nature, and of its bearers as people who belong to a privileged group, along with the firmly engraved perception of Russian culture being more important in comparison with the cultures of neighbouring countries has resulted in the current Western belief that the suffering of Ukrainians, killed by Russian artillery and bombing, are largely equal to the inconveniences of Russian civilians. Through this lens, both Ukrainians and Russians are equally considered to be the victims of Putin’s criminal regime. And thus we see a rise in Western emergency residencies and scholarships for artists and scholars from Ukraine AND Russia. We also see plenty of panel discussions on the ongoing war where Western organizers invite participants both from Ukraine and Russia.

Moreover, the responses to sanctions imposed on Russia and the calls for boycotting its culture more and more frequently come with accusations of discrimination, “russophobia”, and hatred. Thus, a reaction directly caused by military aggression becomes reframed as unprovoked hatred of an ethnic group.

In a new music video by the Russian band Leningrad, today’s position of Russians is compared to the position of Jews in Berlin in 1940. To illustrate this comparison, people in the video wear traditional Russian kosovorotkas with makeshift Stars of David attached to them. Such an interpretation is a blatant insult to the memory of the victims of the Shoah. Moreover, the rhetoric of the band discursively coincides with the manipulative methods of Russian propaganda. Another illustration of Russian culture being inseparable from Russian politics are the photos staged by the Ballet Theater in Russian-occupied Donetsk. For this photoshoot that was used by Russian media to demonstrate support for  the war in Ukraine, the ballerinas formed huge letters Z and V on stage. – These letters, marked on Russian military vehicles taking part in the invasion, are being widely used by Russia as symbols of this war. Ballet has always been one of the cornerstones of Russian cultural identity and one of its most prominent cultural exports. But it is also historically entangled in the Russian imperialistic narrative and is clearly still being used as a medium to broadcast its messages. 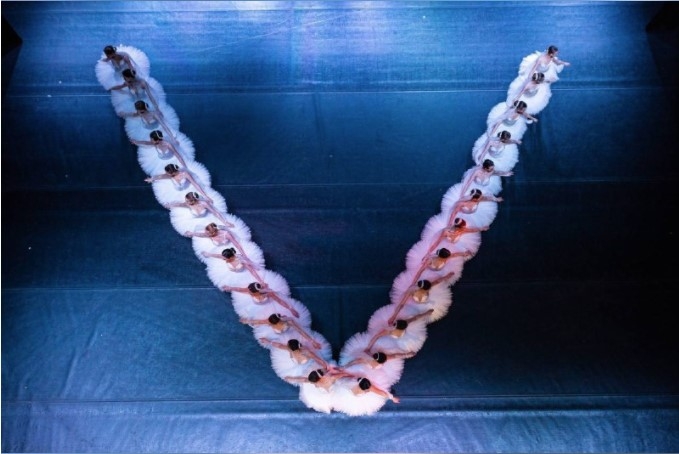 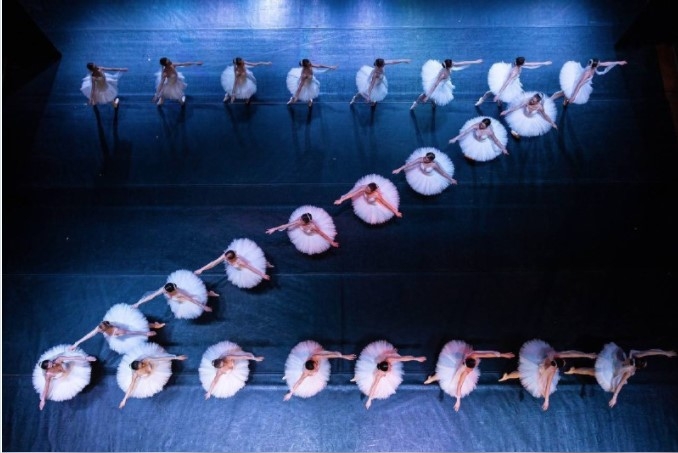 Aside from the examples of Russian culture being a tool of state propaganda, with all of its cannibalistic messages, it’s also worth noting that this imperialistic way of thinking can sometimes be employed by those Russian cultural workers who do not support Putin and position themselves as oppositionists. This is usually revealed in online discussions or under Facebook posts by Ukrainian artists.

One example was triggered by artist Alevtyna Kakhidze’s Facebook post about the inappropriateness of the participation of Russian artists in a public talk called “Teach-in on Ukraine for artists, activists, and art workers”. Alevtyna was encouraging participants from Russia to personally engage in the decolonisation processes and step away from participation in such events in favor of participants from Ukraine. One of those Russian participants, Dmitriy Vilenskiy, had published an open letter about his resignation from the event. But as the reason for his decision he stated that “after spreading information about the event on social media [Russian participants – L.D & A.D.] received a lot of angry messages”. Instead of recognising his belonging to a culture that for centuries has been an oppressor, he claimed that “we cannot participate in discussions where […] everything Russian is considered as a culture of oppression and colonization”. He also proceeds to patronize Ukrainians about their attitude toward their shared history. So even those who claim to be against the colonial consciousness can still remain its champion.

What can Russian voices bring into public discussions, who is their target audience and who will actually hear it? What can these voices tell Ukrainians that has not already been  told by the photographs or personal experiences of destroyed houses, maternity wards, kindergartens in Mariupol, Kharkiv, Chernihiv, Volnovakha, and so on? Can they be something more than an attempt to dissociate from the shared responsibility for this war?

If their messages are directed to their compatriots in Russia, then why do they need a platform in the “civilized” world, where surely few – if any – Russians would hear them? Instead, why not concentrate efforts on spreading anti-war/anti-regime messages inside Russia? Or, maybe, the real target audience of these statements are Western cultural institutions and universities, grantors, curators, collectors, – all of these people who have been providing for the happy lives  and career developments of Russian artists and scholars?

If you are a cultural worker from Russia who feels ashamed or guilty for this war and you don’t know what to do, start by decolonising your own culture from within or give your place on international platforms to Ukrainian voices. It would surely be uncomfortable and uncanny, but you will not be alone in this. Some of your colleagues are already there.

[4] “The enemy is Putin, not Pushkin”, press release from PEN-Germany on solidarity with Ukraine, insufficient sanctions and false boycott calls https://www.pen-deutschland.de/de/2022/03/06/the-enemy-is-putin-not-pushkin/

[7] “Open Letter on the Withdrawal from the Teach-In on Ukraine” by Dmitry Vilensky https://chtodelat.org/b5-announcements/a-6/open-letter-on-the-withdrawal-from-the-teach-in-on-ukraine-by-dmitry-vilensky/

We talked to fellow feminists from Ukraine about military aid, here’s what they told us.