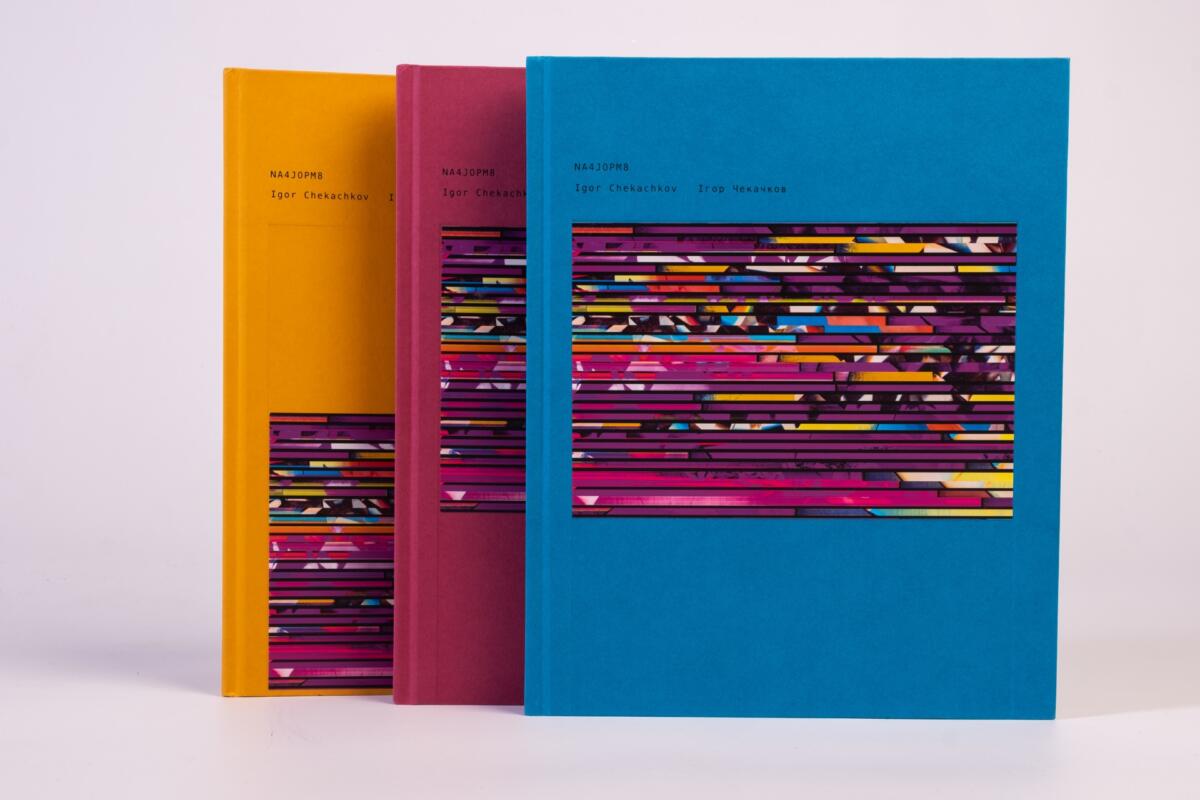 This interview is one in a series of three, initiated by ist publishing during the (ongoing) wartime in Ukraine. ist is a small press in Kyiv-Khmelnytskyi-Lviv that speсializes in books on contemporary culture and art, established by Kateryna Nosko, Anastasiia Leonova, and Borys Filonenko in 2017. They focus on publishing research on art and artbooks by Ukrainian artists, as well as the translation of fundamental texts on art theory and history, philosophy of art, sociology of culture by the leading foreign researchers, into Ukrainian.

Anastasia Leonova: Igor, last year we published your first photobook NA4JOPM8. Let’s take a look back. To begin, why  was it important for you to make this project in book format?

Igor Chekachkov:  This project is, in a certain sense, the result of a long period of my life. My hard drive “ruined” photos that represent  ten years of my life, it mixed everything together and then displayed them in a new format. Since I had already become interested in digital algorithms and their effect on images, this aesthetic change really fascinated me.

An important feature of this project is not only the length of time, but also the multifaceted themes that became interwoven by a single visual code. Over the years I worked as a photojournalist, covering various political events in my native Kharkiv, while also taking intimate photos and developing artistic projects and street photography. All this became mixed and combined into a single story. The digital intervention of the error shaped these photographs, creating a single visual language for them all.

And the book, as a summary, as a damaged diary, is a necessary point. The book format brings the images into the realm of the object, which demands a different engagement of time as well as further r emphasizes the flow and weave of different topics into one another.

Do you mean documentary and private stories, which you simultaneously shot for a long time and tried, unsuccessfully, to combine into one project?

Exactly. This coincided with my long-standing desire to make a series that would combine political and private space. I remember well how during the Maidan in 2014, I had personal stories and dramas, and I understood: what is happening in my apartment is no less important than the situation outside the window. I have always been interested in telling stories through personal experiences. I then tried to assemble the series, but nothing came of it. The photos were completely different.

When my entire archive was destroyed, it was a terrible feeling.  My complete collection; all of my series and a lot of additional material that I was planning to arrange into a project was affected. I ventured back to the hard drive again only after a few months passed.  Unexpectedly, these  works took on a completely new meaning for me and I began to appreciate and select them. I began searching, sifting through the damaged archive of ten years of my life. This led to a series that combines Ukrainian politics, my private life, and commercial photography. And has become clear that the political and the private have become inseparable.

So we might say that the computer, in a way, became a co-author of your series?

This project put me in front of a lot of questions, and one of them is the idea of authorship. I have been studying Buddhist philosophy for a long time and I am close to the idea that we are not fully the authors of our actions. The same topic is raised in the Tao Te Ching.

Once after an exhibition of this series, a viewer rejected my story and declared that I had deceived everyone, that I had purposefully edited the photographs in this way. But I didn’t and still don’t understand why I should make this story up; why it is more favorable for it to have been an act of fate that this hard drive was damaged and produced these images than if it was a conscious and willing recombination by myself(it wasn’t). And also,  why do some claim that I cannot claim full authorship because of this unintended collaboration? Indeed, something (the hard drive, the universe, randomness – everyone chooses what is closer to him) brought something to that series that I never would have done on my own. I worked for ten years, generating the raw material for this collaboration. 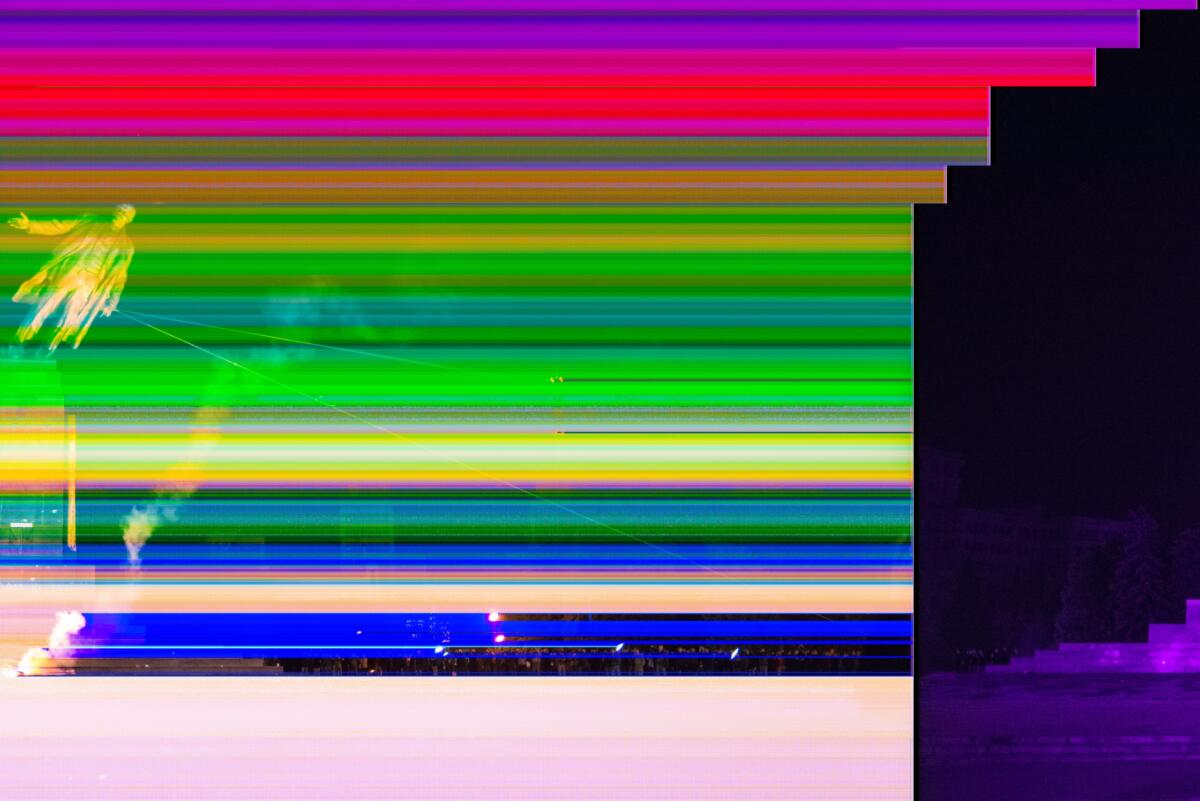 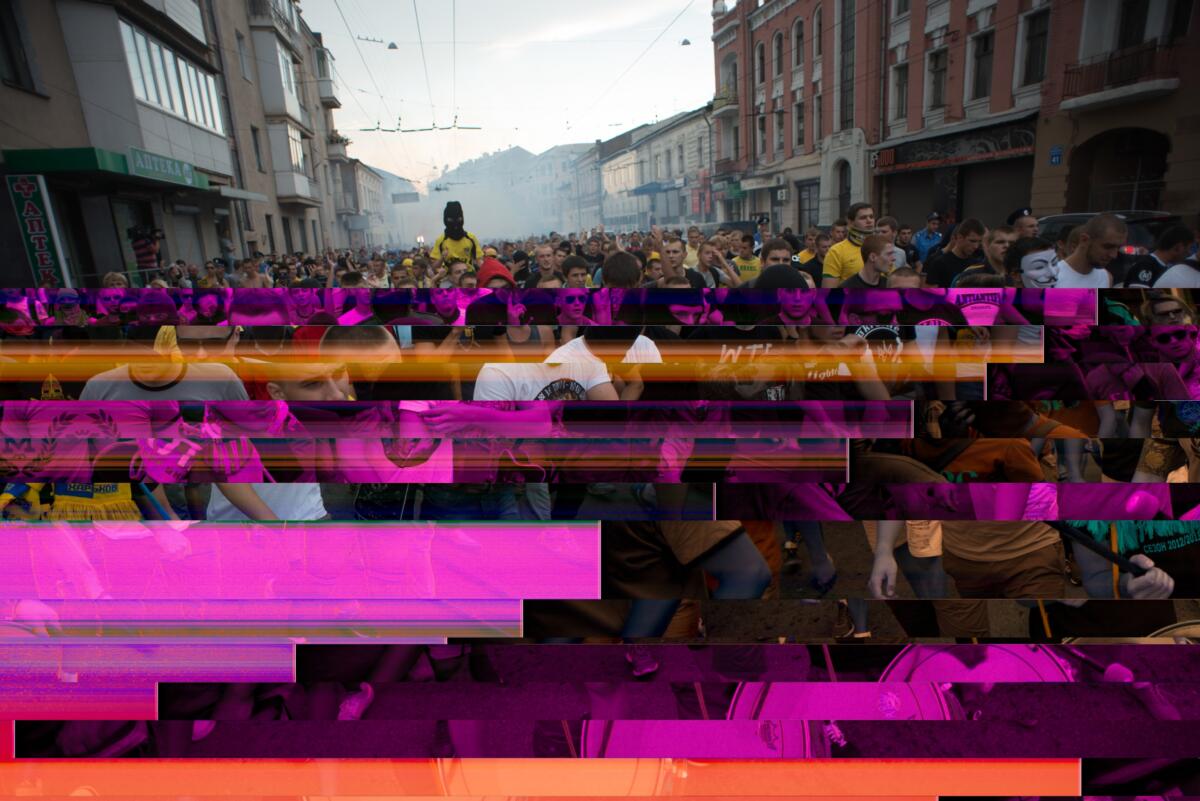 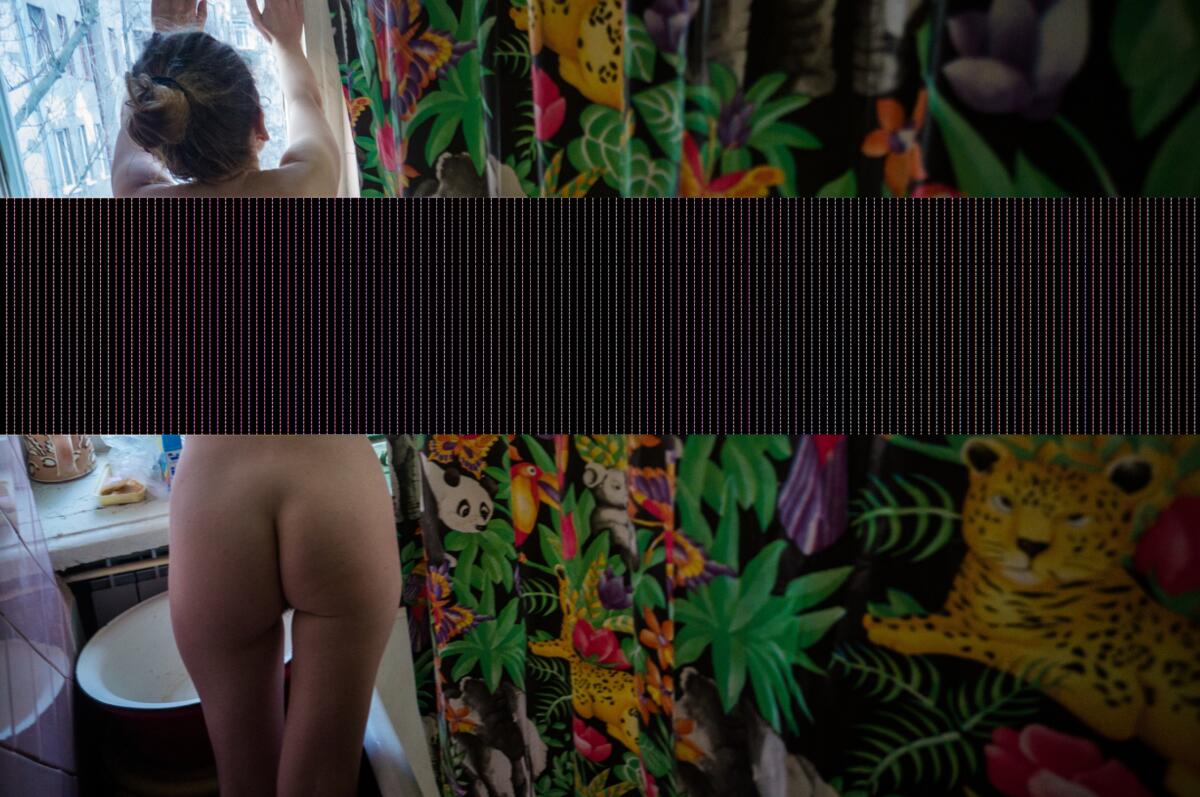 Regarding the project and the book name NA4JOPM8,do you have a secret as to how to pronounce it correctly?

I saw the dummy of the book back in 2018, that is, you started working with Ania (Ania Nałęcka-Milach, the designer of the book) long before the cooperation with ist. Tell us about your cooperation.

Ania is an amazing designer. She brought so much to this book. What she does with books, how she experiments and how she reveals projects through the book format is incredible. I asked her for advice, but she wanted to make this book herself, which made me indescribably happy.

She made a dummy that was so difficult and so expensive to sell that the book didn’t see the light of day for several years. Only when I said goodbye to the idea of printing it in Ukraine (unfortunately our printing houses do not have sufficient experience in working with such complex projects), was I able to find a way to print this book.

My friend Antoine d’Agata introduced me to his friend and printer Ufuk who runs MAS printing house in Istanbul. They specialize in photobooks and they are very fond of complex experiments. In the end, everything turned out perfectly: during the downtime, Ania and I got the opportunity to reflect and look at the project from afar. New ideas appeared, and as a result, we reworked the original version a bit, making it even better. At MAS we were able to print as we would not have been able to print in Ukraine: they not only took on such a complex project, but also offered interesting technical solutions. So I am very glad that a lot of problems prevented us from printing this book in 2019. 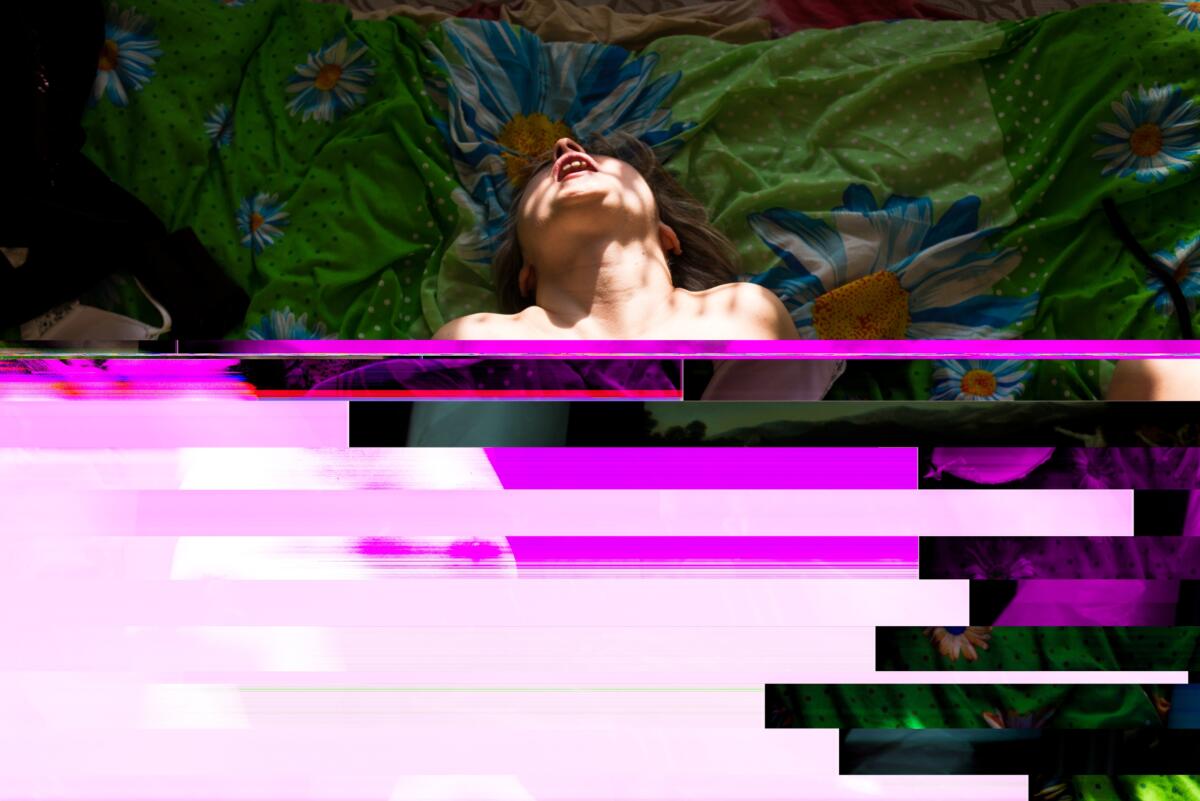 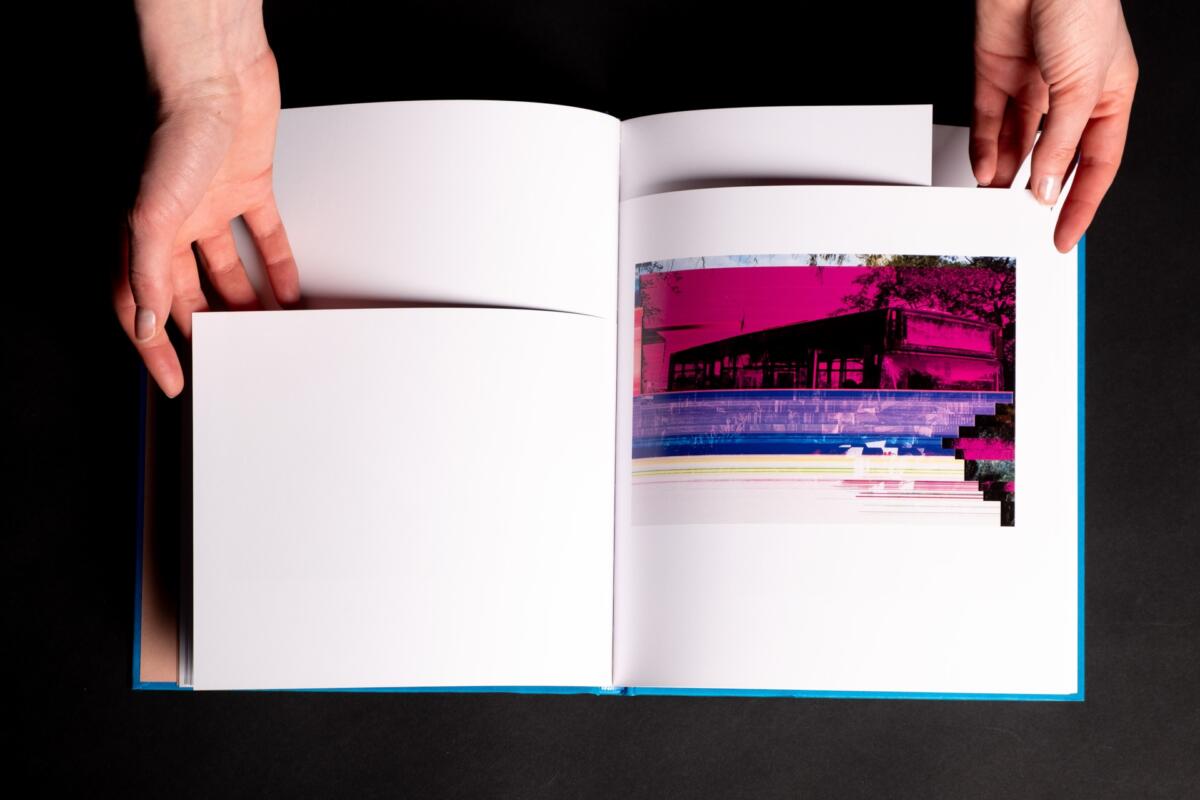 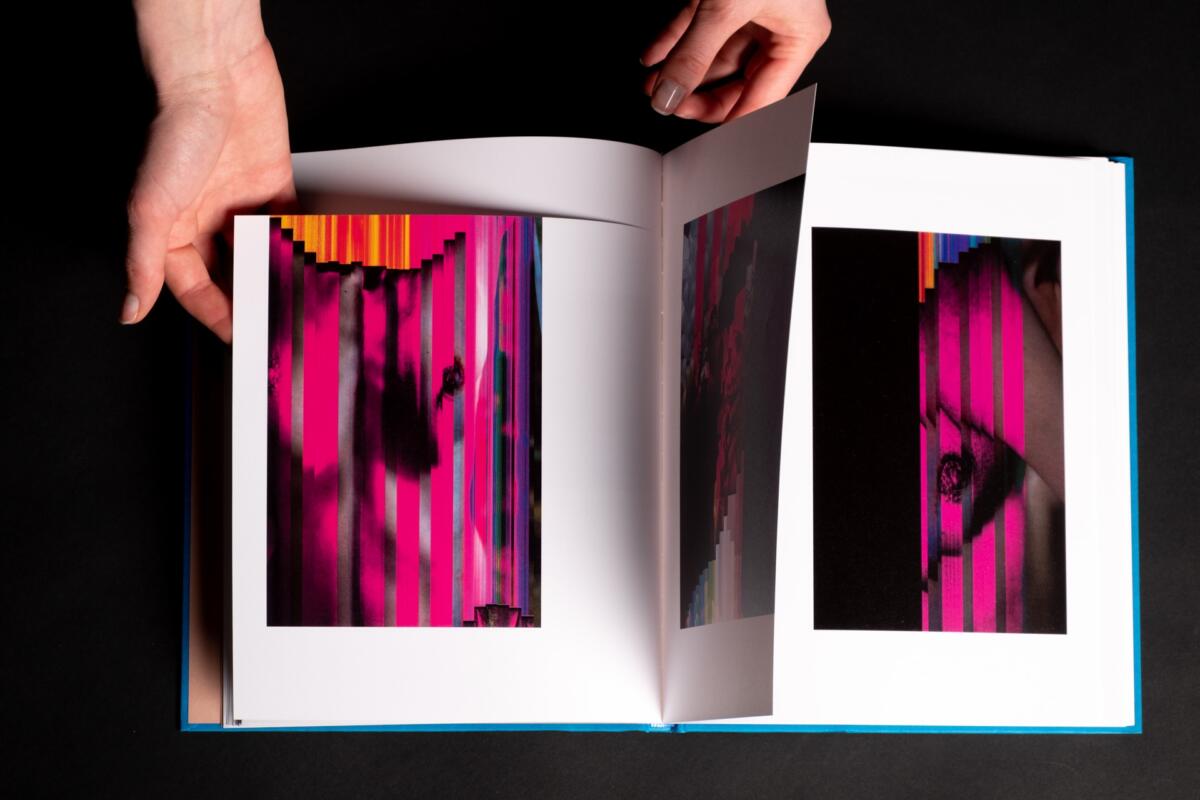 What was the most difficult part of the production?

It may not be noticeable at first, but the book has a lot of layering, which we made due to short pages overlapping each other. We wanted to increase the level of “error” and emphasize the multi-layered nature of the images, and the new meanings that appeared after the hard drive collapsed and during the selection of works. From the technological side it is quite difficult. Also there was a lot of manual work. In the end, the printers cut some pages with a cutter by hand, the sections that are shorter in width.

It was also hard to choose the color of the cover, so Ufuk suggested following the spirit of the project by having the computer generate a random selection. So we chose three different colors for the cover that contains an image from the series and set a completely random combination for each option, where the front, sides, and ends are different colors, and the image in the picture is randomly attached to the top or bottom. As Ania said, “We customized the error for you.” I couldn’t have done it without such a great team. 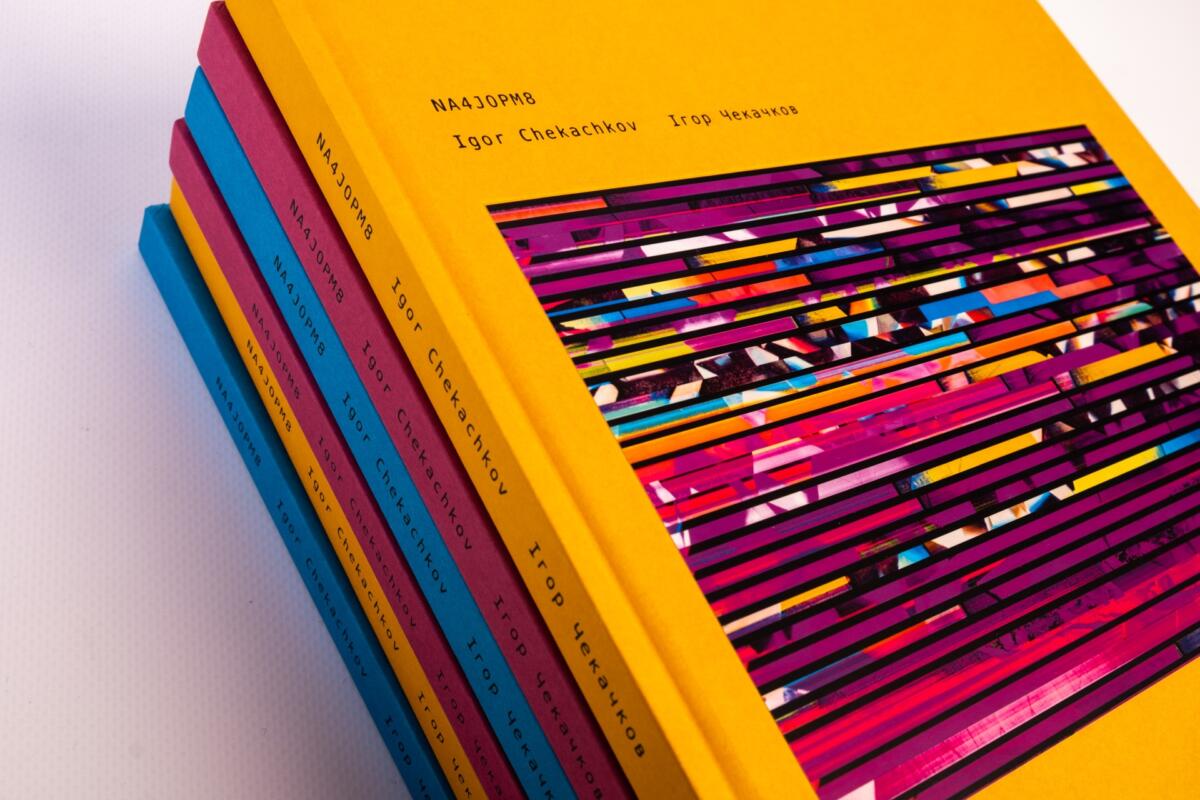 Do you continue to work with randomness and computer algorithms in photography?

Yes, it became an important part of my practice and a focus of my interest until the war. Now I have begun to pay less attention to this, because I have a feeling that this is not the time for this experiment. In this situation, a completely different type of photography is needed. However, on the first day of the war, I did create a series using algorithms and randomness, but now I’m focused again on a more documentary approach.

Has the war changed your vision of photography? What are you currently working on?

The war has changed my life a lot, it has changed my practice and the questions that I have begun to ask. I am working on several projects at the same time: documenting the life of migrants in the west of Ukraine, making a short film, working on a personal series related to my family. I periodically return to my previous work in new shoots. About ten years ago, I began a series called Daily Lives in which I filmed how people lived together in apartments and dormitories. For several years, I was taking a deep dive into the atmosphere of someone else’s private space, someone else’s  story, exploring the question: how do we live together?

On February 24th, 2022, when Russia began the armed invasion of Ukraine, I was forced to move from Kharkiv to Lviv. The locals kindly opened their doors for me and other displaced people. My first stop was the house of my friend who sheltered more than thirty people in the first two weeks. Some of them stayed there only a night to rest before crossing the border and others stayed for a long time, little by little arranging their lives. One couple even got married in our backyard. Living surrounded by other families, their children, parents, and pets, I decided to continue this series in this new, unexpected context. Now I shoot using the same technique, placing the camera above to create a birds-eye view, to capture the life of IDPs (Internally Displaced Persons).

I have also been working again on the series Obscure Land, in which I photograph landscapes in motion using digital algorithms. It continued very naturally on the first day of the war, when I was evacuated from Kharkiv to Lviv. Since the beginning of the war I have been shooting almost every day, there is no time to reflect on all this yet. 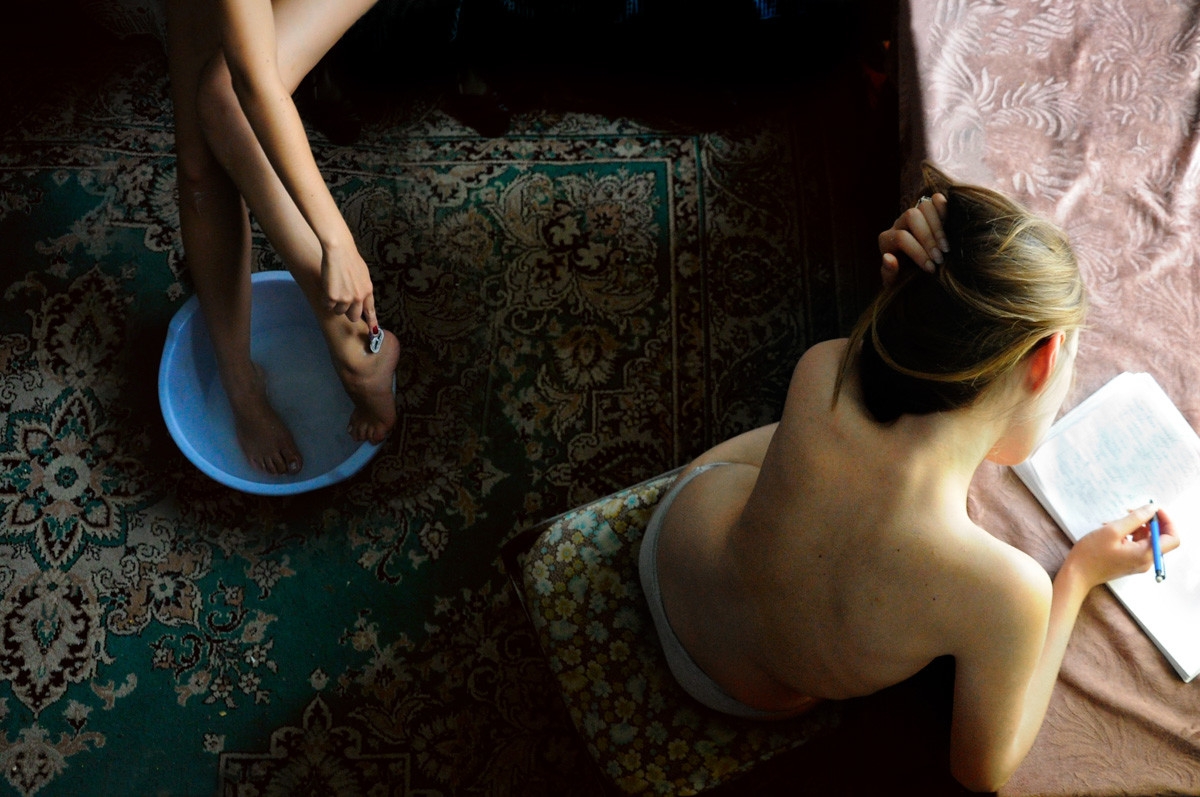 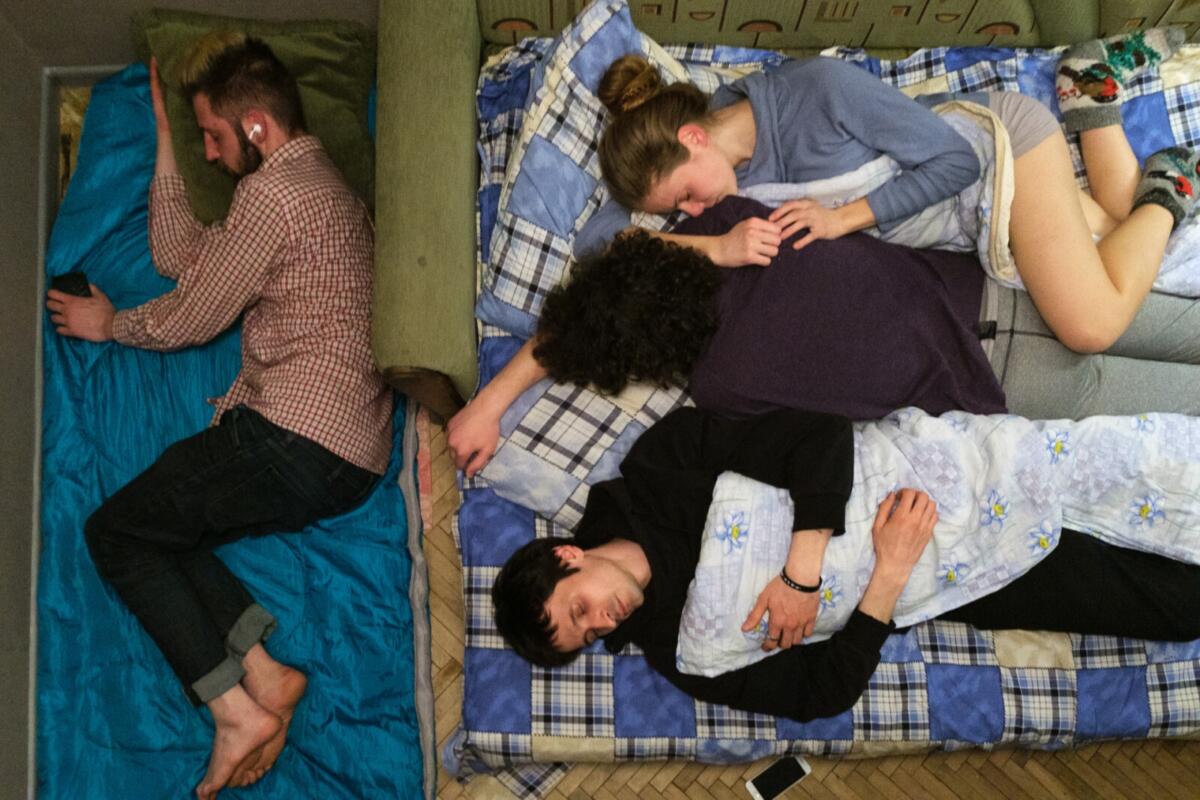 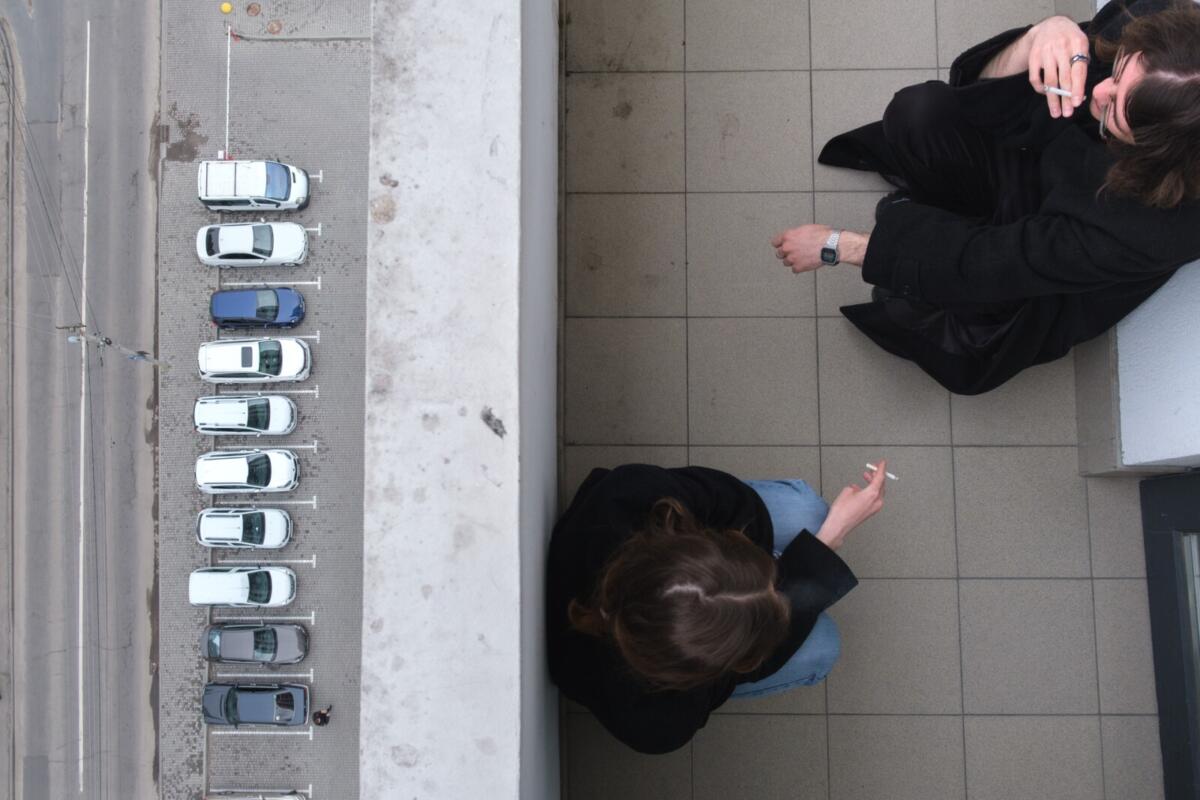 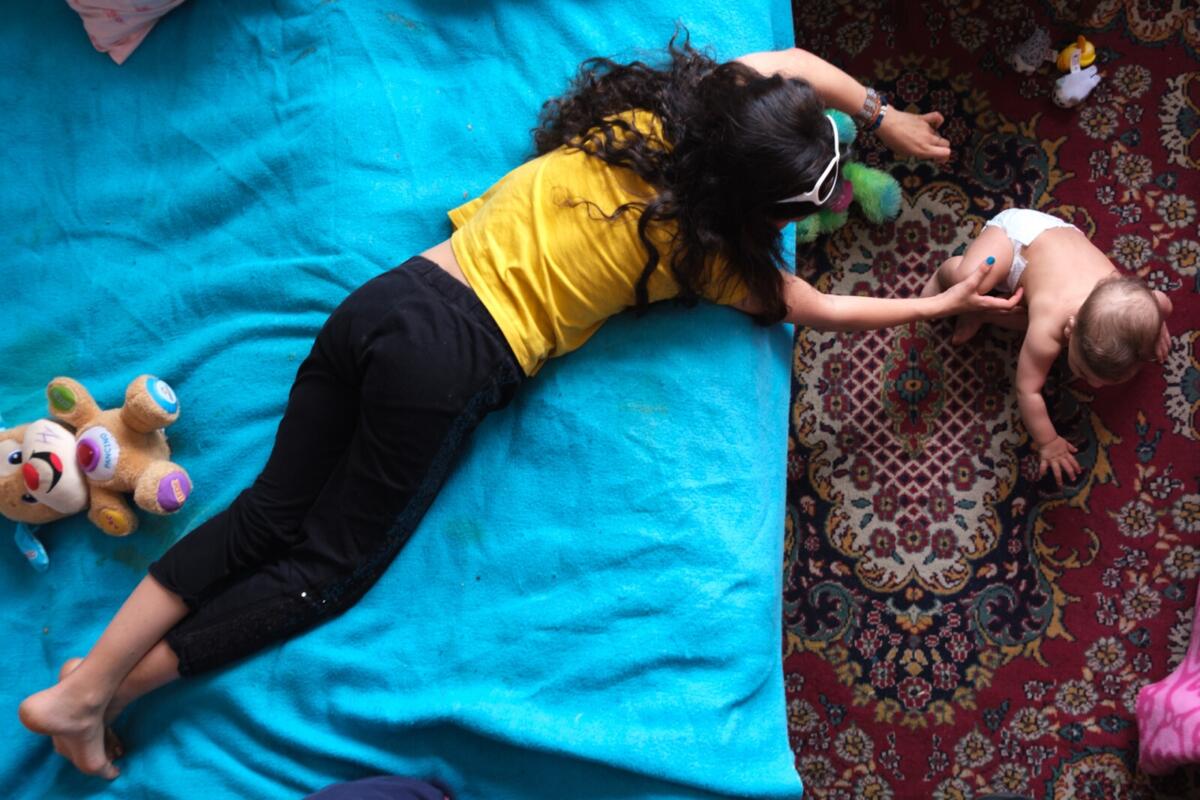 Igor Chekachkov is a Ukrainian photographer and educator. He began working as a photojournalist in 2008. In his artistic practice he focuses on the body as a target for  political subjugation , exploring the boundaries between public and private spaces. Questioning the medium of photography, one of the areas Chekachkov works in is computer algorithms and how they affect photography.
Chekachkov teaches at the independent Photography Academy, which he founded in 2017.