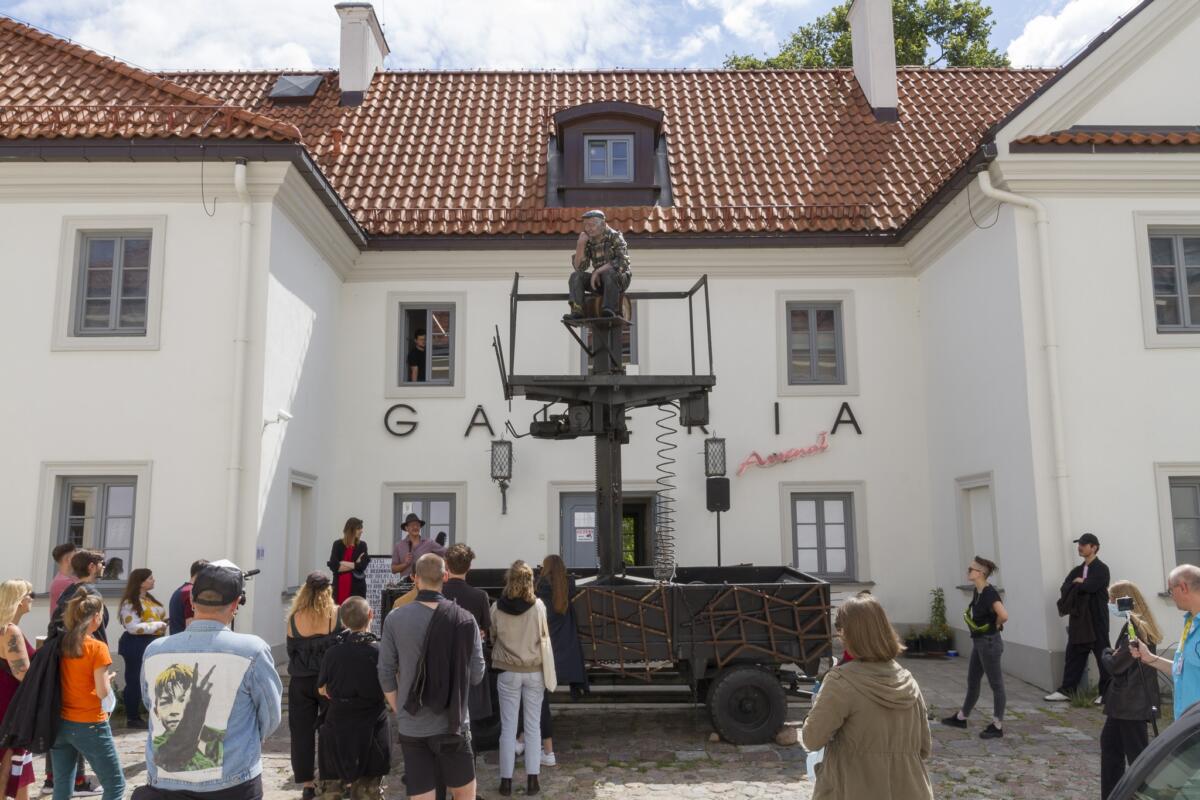 It is interesting to learn that Bialystok – a city generally considered to be, at the very least, conservative – has become the cradle of the anarchist movement in post-partition, late 19th and early 20th century Poland. That people from abroad who are passionate about anarchist history write books about it, while locally, hardly anyone is even remotely aware of this. And it’s hardly surprising: the Spanish-language Anarquistas de Bialystok is a niche publication, and on the streets of this city – as well as others – only the official history is emphasized. As Katarzyna Różniak, curator (together with Post Brothers) of the exhibition “In the Beginning Was the Deed!” notes, we can visit Bialystok on the “trail of the Branicki family” or on the “trail of factory owners” but not on the “trail of revolutionaries” or “trail of workers”. So what can the exhibition at Białystok’s Arsenal Gallery teach the local and national community? To open their eyes to historical and still-common forms of oppression and exploitation? To understand why protest movements are sometimes violent and resort to violence themselves, not seeing other effective tools of action in their hopelessness? Knowledge forgotten and pushed out of the collective consciousness? Certainly, but local right-wing activists see only “explosions, sex and penis” in the exhibition. (sic!).

This last quote comes from a long-winded Facebook post by Jan Walczuk, President of the Sovereign Institute Foundation (Instytut Suwerennej), which is full of inaccuracies, ill will, bad humor, and venom (directed primarily at the LGBTQ+ community). It was Walczuk who was one of the first to open fire in the online cannonade against the gallery, the curatorial team, and the artists participating in the exhibition. Despite his obvious fondness for memes and internet jargon, he is not just an ordinary troll. As the president of the aforementioned foundation, he sits on around a million PLN which was donated in 2019-2020 by the government agency National Liberty Institute. The previous president of the foundation, Przemysław Klimek, organized one of several counter demonstrations to block the first Equality March in Białystok in 2019. And how did Walczuk manage to endure the 2.5 hour guided tour of the exhibition, which he criticized avidly and profanely? He was waiting for the pièce de résistance, Fag Fighters by Karol Radziszewski. Radziszewski’s installation, separated by a curtain and marked as intended for adults, is a continuation of his project Fag Fighters which was developed over a decade ago. The work is not new, but it is significant in that it is shown for the first time in the artist’s hometown and is complemented by the context of the events from two years ago. No one in Poland needs a reminder of what happened on the streets of Białystok in the summer of 2019. Anyone who follows contemporary events in Poland at least a little bit will surely be able to recall the images on TV and across social media that day: verbal and physical violence directed towards the participants of the march, a police helicopter circling in the air and a water cannon circling on the ground.

Radziszewski’s Fag Fighters reflects this violence like a mirror directed at not only the activists of far-right or fascist organizations, but also at the so-called “ordinary people” who stood shoulder to shoulder with the far-right, trying to block the march. A dozen or so years ago, Radziszewski created a perverse gay militia who, dressed in pink balaclavas (knitted by the artist’s grandmother), terrorize Poland and fight against heterosexuality. Using the tools of art, he visualized the darkest dreams of right-wing extremists and the fairy tales they tell to scare the rest of the already conservative society with. Meanwhile, Radziszewski does all of this in such an exaggerated and blatantly fictional way that any reading of Fag Fighters as a real call to arms would be an obvious insult to intelligence. Especially since the “vulgar graffiti” and “heterophobic slogans” (sic!) are juxtaposed with the video that Radziszewski himself recorded while taking part in the Equality March in Białystok. The tension between these elements of the installation makes it clear who is the oppressor and who is the oppressed in Poland. Karol Radziszewski and ‘Fag Fighters’ at the exhibition ‘In the Beginning Was the Deed!’, photo: Instagram @karolradziszewski

Of course, people like Jan Walczuk or Adam Jakuć (the new editor-in-chief of “Kurier Poranny”, a local newspaper recently taken over by state-owned PKN Orlen, a petroleum company) are not lacking in intelligence – they read and quote the description of Radziszewski’s piece, pointing directly to its nature. I will even risk saying that they understand it. At the same time they wink at whoever they need to, reversing concepts and defending the supposedly repressed majority (imaginary “heterophobia”, suggestions that exhibitions should instead be telling the story of devastated churches, or the standard rhetorical figure of the “heroic Pole rescuing a Jew” – the only thing missing is the classic “if you are so brave, do such an artwork about Muslims”).

It is not surprising that all media coverage has focused on a single work: the easiest to manipulate and take out of context. Posters juxtaposing a photo of the Fag Fighters and a portrait of the mayor of the city that funds the Arsenal Gallery are already appearing on the streets of Bialystok. Most Facebook and Twitter posts focus on single fragments of the installation, stressing its “pornographic” character followed by enraged comments like “our money went for that!”. No one asks about the context here because, let’s be honest, what context do you need to prove a ready-made thesis? And so without a second thought, they contribute to the swelling attacks on the gallery, its employees, and the artists. It’s the same story as the massive media attacks on the Biennale Warszawa during the last presidential campaign, on the Arsenal Municipal Gallery in Poznań (a nod here to vindictive Piotr Bernatowicz who has now made his way to Warsaw) or Galeria Labirynt in Lublin. The atmosphere has become so charged that the prospect of prosecutorial charges and court proceedings is no longer a question of “if” but rather “when”: as in the case of Zofia nierodzińska, the deputy director of Arsenal in Poznań, or at Labirynt. This is also not the first time the Białystok Arsenal has been the focus of such attacks, last year the quarrel centered around works by the Ukrainian artist AntiGonna which were presented during the exhibition “Fear”. “In the Beginning Was the Deed!” is an exhibition of not just one work by Karol Radziszewski, but an entire narrative based on documents retrieved from archives, historical publications, paintings, and drawings created in the 1960s that allude to workers’ history and past social tensions, as well as a number of contemporary Polish and foreign artists who refer to both past and present struggles. Just behind the wall from the most talked-about installation by Radziszewski, a delicate work by Anna Yermolaeva is placed, consisting of flowers as symbols of a number of peaceful revolutions over the past few decades, from Portugal (1974) to Egypt (2011). The exhibition rooms are filled by the complementing soundtracks of video works by Ewa Axelrad (Shtamah) and Liliana Zeic (Public Displays of Affection), whose rhythmic snare drum and police formation commands thicken the atmosphere.

In the first part of the exhibition we find a common space, planned as a reading room and a place for meetings and discussions, partitioned by a thick, black silicone rope by Iza Tarasewicz (Arena III). It is there that slowly, as part of the work of Juan Pablo Macias and with the support of the Cervantes Institute (again, horror of horrors, public money – but this time from Spain) single sheets of paper will appear and will become the final Polish translation of the book Anarquistas de Bialystok. In the next room there are ink drawings by Tadeusz Milewski from the 1960s depicting, among other things, an accident at one of Bialystok’s textile factories, and by Wilhelm Sasnal, referring to a more contemporary fatal accident at a domestic appliance factory in Łódź. The works mentioned above are obviously a modest selection from the whole set presented at the exhibition, but even these alone allow one to see a cross-section of the themes present in In the Beginning Was the Deed! Local and global history mixes with state, economic, and, last but not least, social oppression, which can be seen, for instance, in Radziszewski’s work. There are also references to various strategies of resistance and struggle, actual or potential (from the earlier mentioned Anna Yermolaeva, to Łukasz Surowiec suggesting a possible future rebellion of people experiencing homelessness). guided tour at the exhibition ‘In the Beginning Was the Deed!’, photo: Maciek Zaniewski, courtesy go the Arsenal Gallery in Białystok

The uproar generated by (in this case) the right-wing media can also be aptly summed up by another work presented in the exhibition, a video by the duo Claire Fontaine A fire is a fire is not a fire, which shows a picture cut out of a newspaper of a car burning during the riots in Paris in 2005. The shallow media message is always that the radical gestures of opposition to the daily oppression of the state, capital, or society are considered as an unacceptable violence. At the same time, the actual, systemic causes are not questioned, implicitly recognizing them as neutral “normality.” We know this mechanism – after all, commentators on the “controversial” work of Karol Radziszewski see the situation in a similar way. This vulgar reaction to violence (even a purely symbolic one, limited to a room in a gallery veiled by a curtain) is for them an unacceptable example of social (in this case, artistic) degeneration. However, it is “normality”, of which they are zealous advocates, that systemically builds a climate of hatred, incites and triggers real violence, which – as we saw two years ago, but also now witness much more often – is bubbling just under the surface and it does not take much for it to spill over. This cauldron could cool, but there are too many people invested in its constant scorching.

Putting this specific case aside for a moment, all media and state (as in the case of the prosecutor’s accusations) attacks on cultural institutions over the course of recent months and years are dangerous for yet another reason. We can clearly see today, especially in the younger generation of artists and cultural workers, a desire to increase the degree of democratization and social sensitivity of institutions, be they public or private. The situation we are facing today, as an artistic community, pushes back the perspective of an open, matter-of-fact discussion on this subject for years to come, if not forever. Today, we have to defend fundamental values, such as freedom of expression, once again. And so I will end with a question: can we move forward when we need to stand our ground?