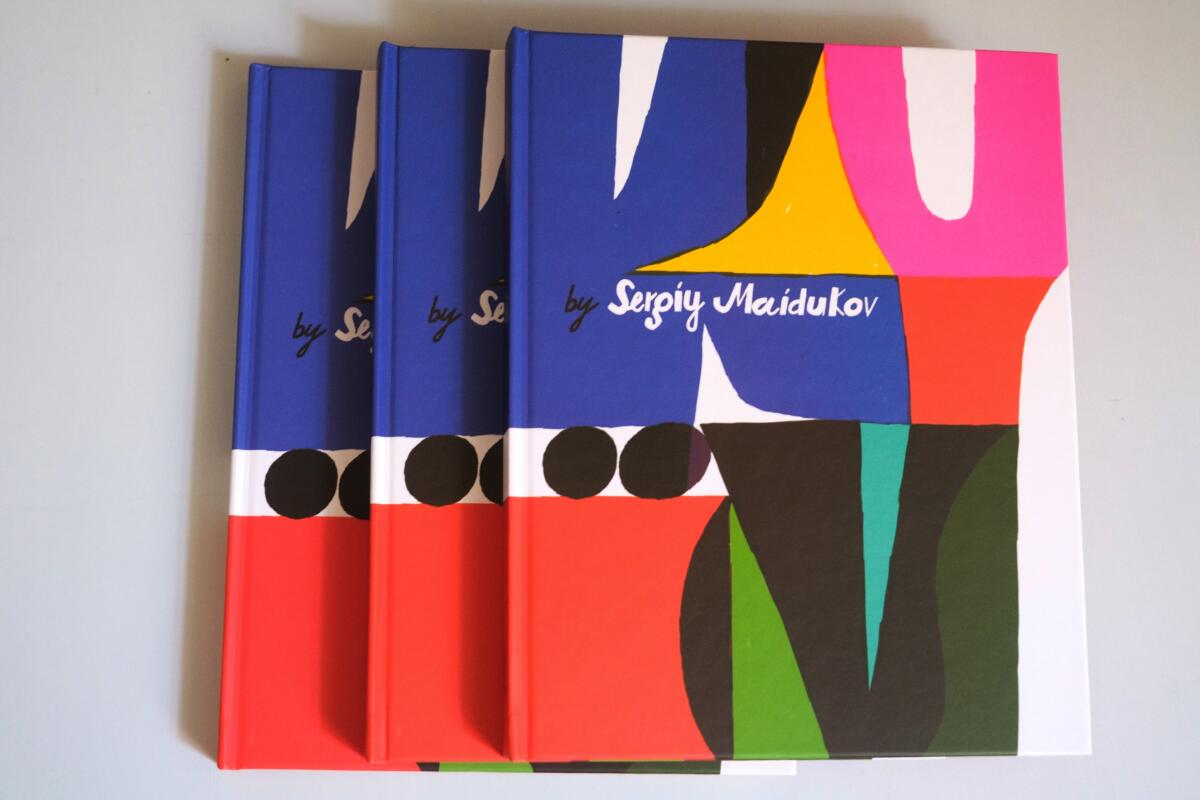 This interview is one in a series of three, initiated by ist publishing during the (ongoing) wartime in Ukraine. ist is a small press in Kyiv-Khmelnytskyi-Lviv that speсializes in books on contemporary culture and art, established by Kateryna Nosko, Anastasiia Leonova, and Borys Filonenko in 2017. They focus on publishing research on art and artbooks by Ukrainian artists, as well as the translation of fundamental texts on art theory and history, philosophy of art, sociology of culture by the leading foreign researchers, into Ukrainian.

Kateryna Nosko: Let’s talk about your art book KYIV, which we published together more than a year ago. For you, was the process of creating it collaborative, or did you feel that the final decisions and the leading role was left to you as an author?

Sergiy Maidukov: It was absolutely collaborative work. After the required number of paintings was collected for the art book, I no longer felt like the main person in the process of creating the book. The only point where I felt my exclusive right to decide was the cover.

The cover is important for a book. What is it for you?

It is a beginning. I often choose a product by its packaging, and a book by its cover. It seems to me that it makes sense because it indicates the quality, the taste of the one who chose the designer, and their professionalism. For me, it is also a kind of summary of the work done. The cover tells me if I want to see what’s inside or not. 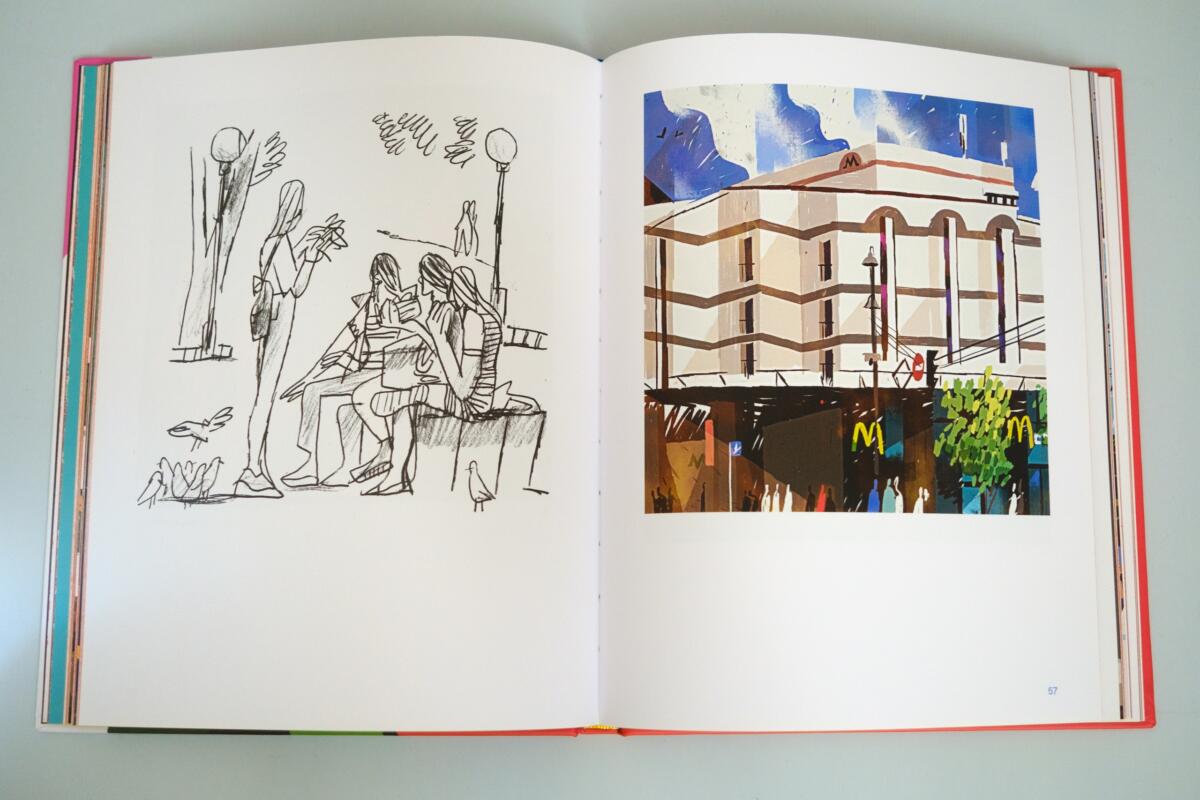 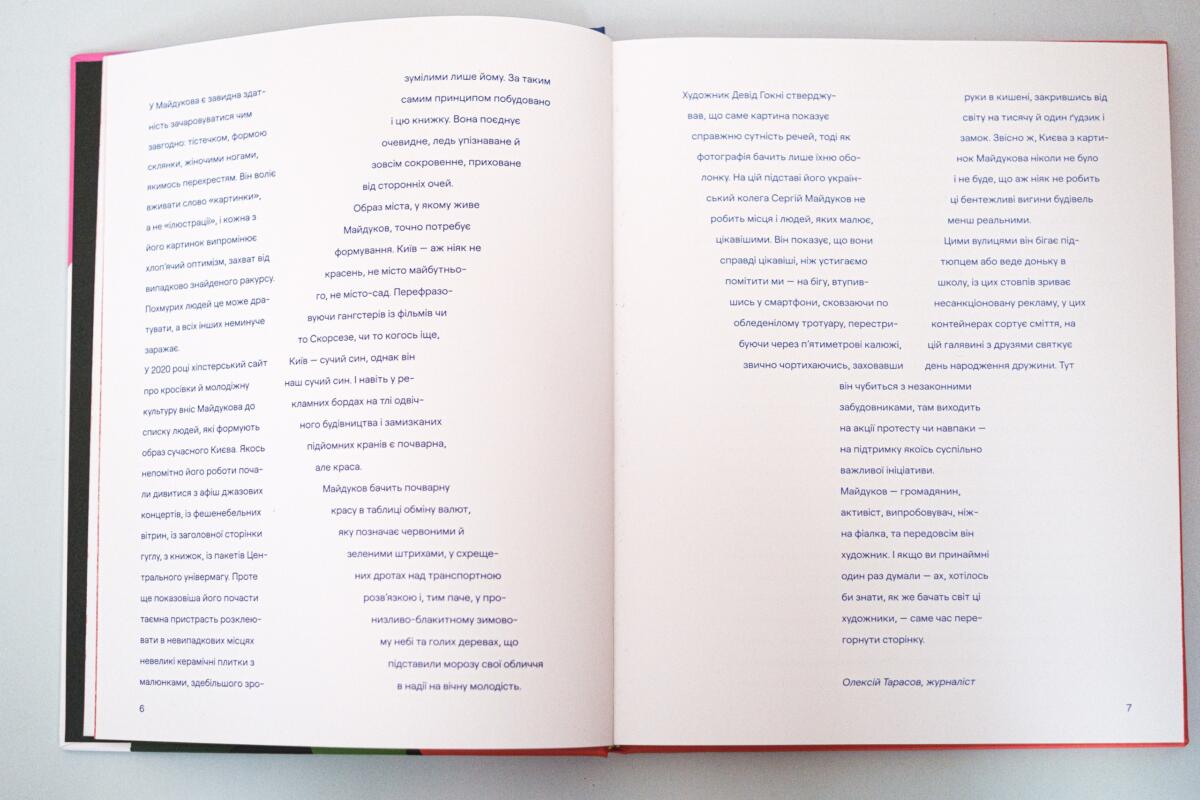 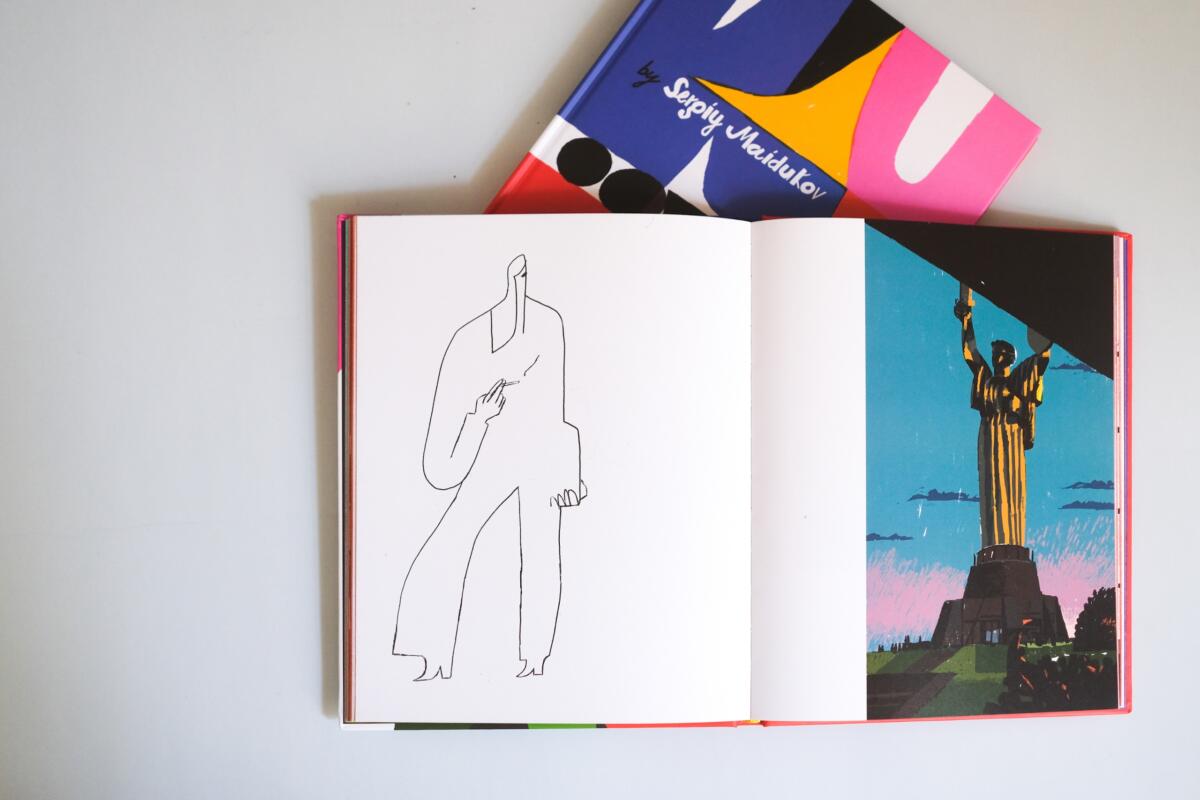 For you, how does an art book differ from an electronic format, viewing your illustrations on a monitor?

Tactility is fundamental for me. Therefore, e-books, Kindle, do not resonate with me. I need to hold a book in my hands, feel that I can open it, turn a few pages, and put it back on the shelf. I feel an unreliability in digital works because there is a feeling that I can lose the archive. Any hard drive has an expiration date and any cloud is untrustworthy, as opposed to physical objects. However, it is true that fire and flood can happen.

What is the status of the art book for you today, when it is part of an exhibition, and do you perceive this kind of book as something more utilitarian?

More utilitarian. I wouldn’t say that exhibitions with books transfer the book for me to the zone where I perceive art, painting, and various exhibitions. For me, it is a utilitarian object, the benefit of which is its beauty.

At our publishing house, when we create an art book, we consider this medium as a work of art. In general, it has the right to co-exist on equal terms with graphics and painting. Did it feel similar to how you create your graphic works when you were creating the art book?

I think so. This is the other side of the coin. As a consumer, I treat a book as a utilitarian object. While the work on it still lies in the creative plane. There are the same stages: you write ideas, make sketches, match pictures, and work on a design. Therefore, I consider the process of creating an art book as a creative process. 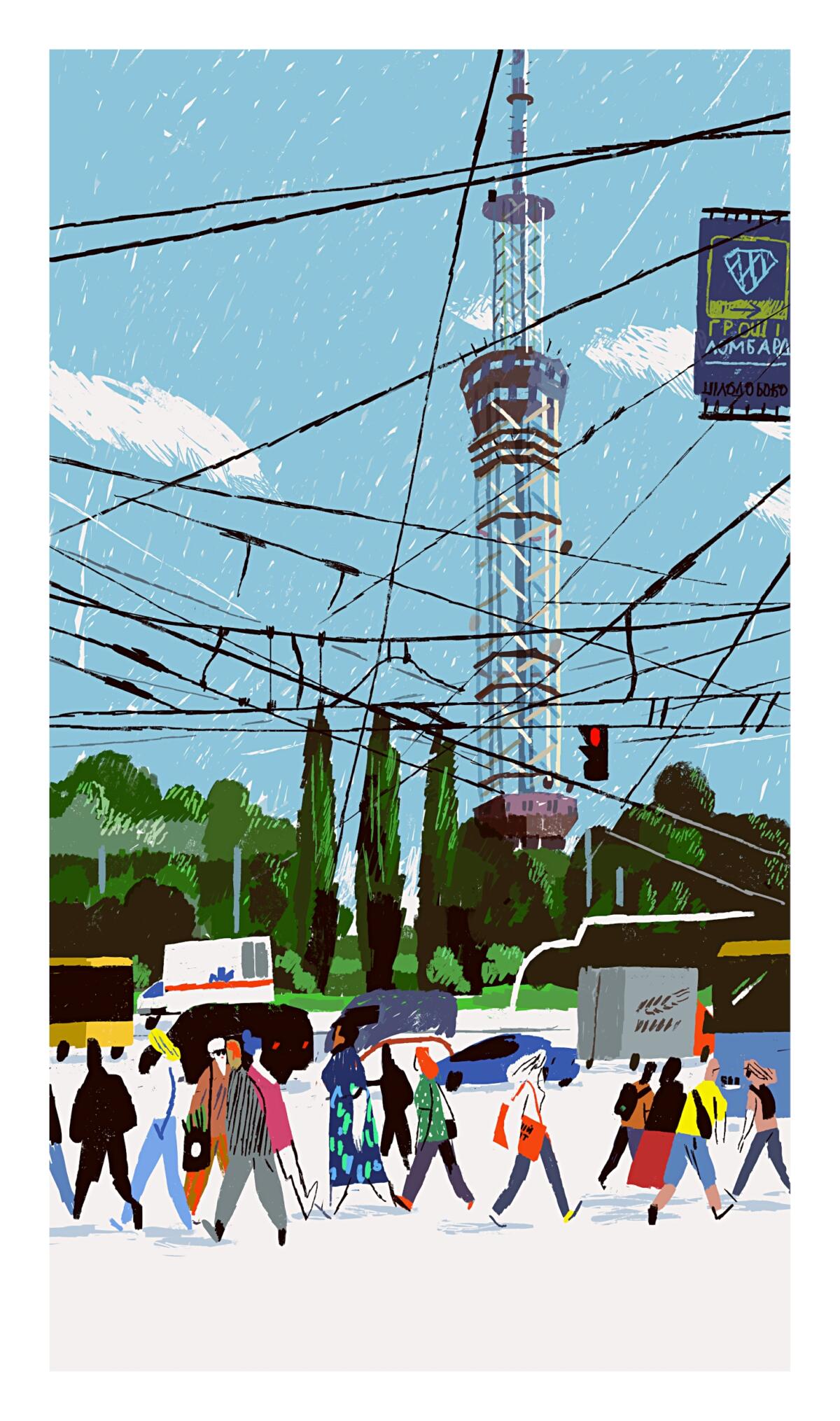 Dorohozhuchi, Babyn Yar, an illustration, from KYIV by Sergiy Maidukov

You said that you match pictures. What was the curatorial selection for the Kyiv book?

Andriy Bozhok and I, along with the publishing house, took everything I had, put them together, and discarded the weakest works (around 7-8 pictures). Then we realized that just having pictures is not enough. It is necessary to understand how to match them with each other. We tried to go through the geography of Kyiv, through the seasons, the meaning of places, chronology, and time of day. And we settled on the fact that each picture should correlate with the next and previous one. This is a kind of frame that works in threes. So, we settled on the fact that there should definitely be a visually dramatic composition: pictures should be combined or contrasted, interact with colour or rhythm, and calmness or dynamism.

Next, there were about 40 variegated colour pictures. They were boring, even though they were colourful, descriptive, and detailed. All the same, their range without counterpoints was rather monotonous. Then we decided to put black and white sketches as counterpoints. It was one of the most critical decisions in our entire work process. 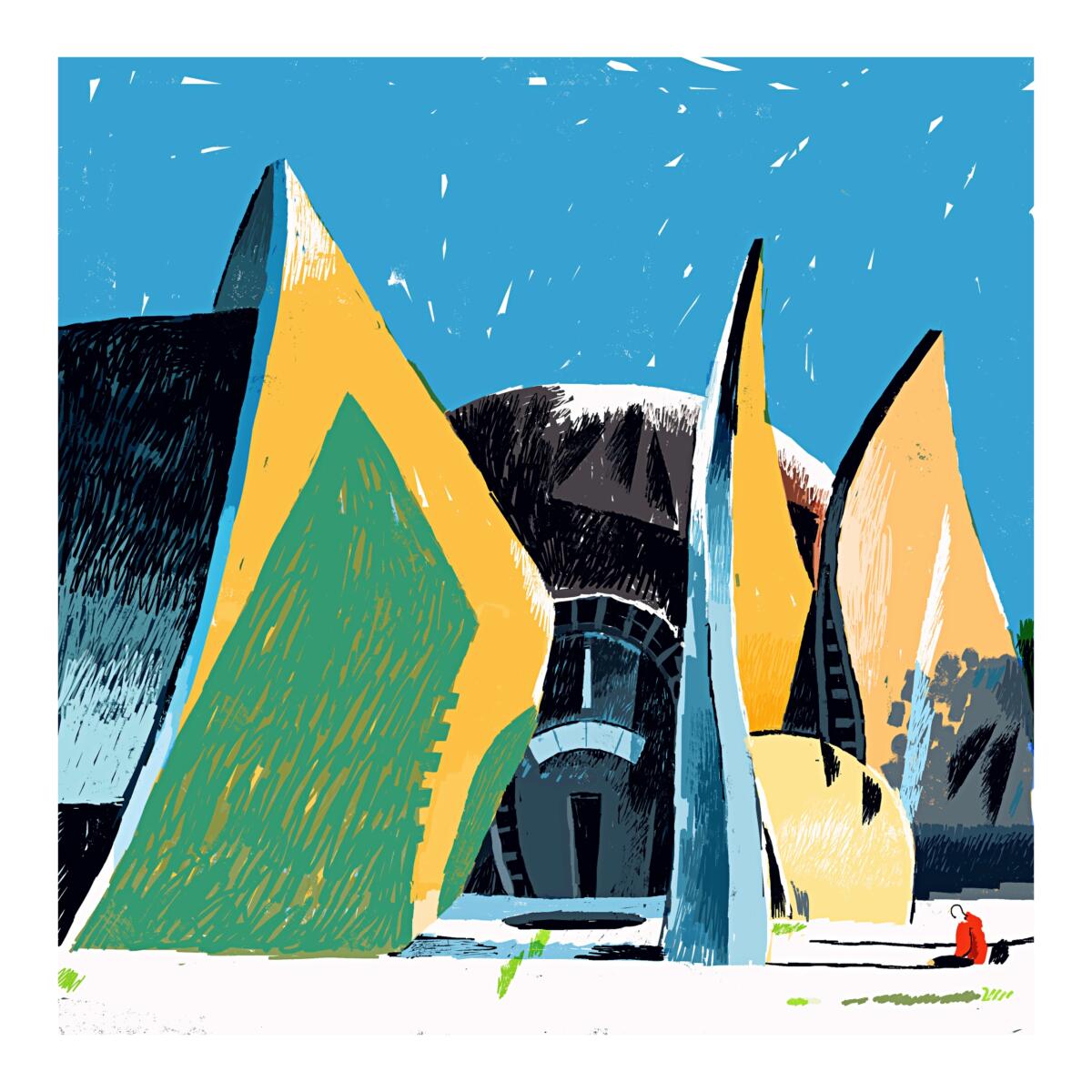 Kyiv Crematorium, an illustration, from KYIV by Sergiy Maidukov 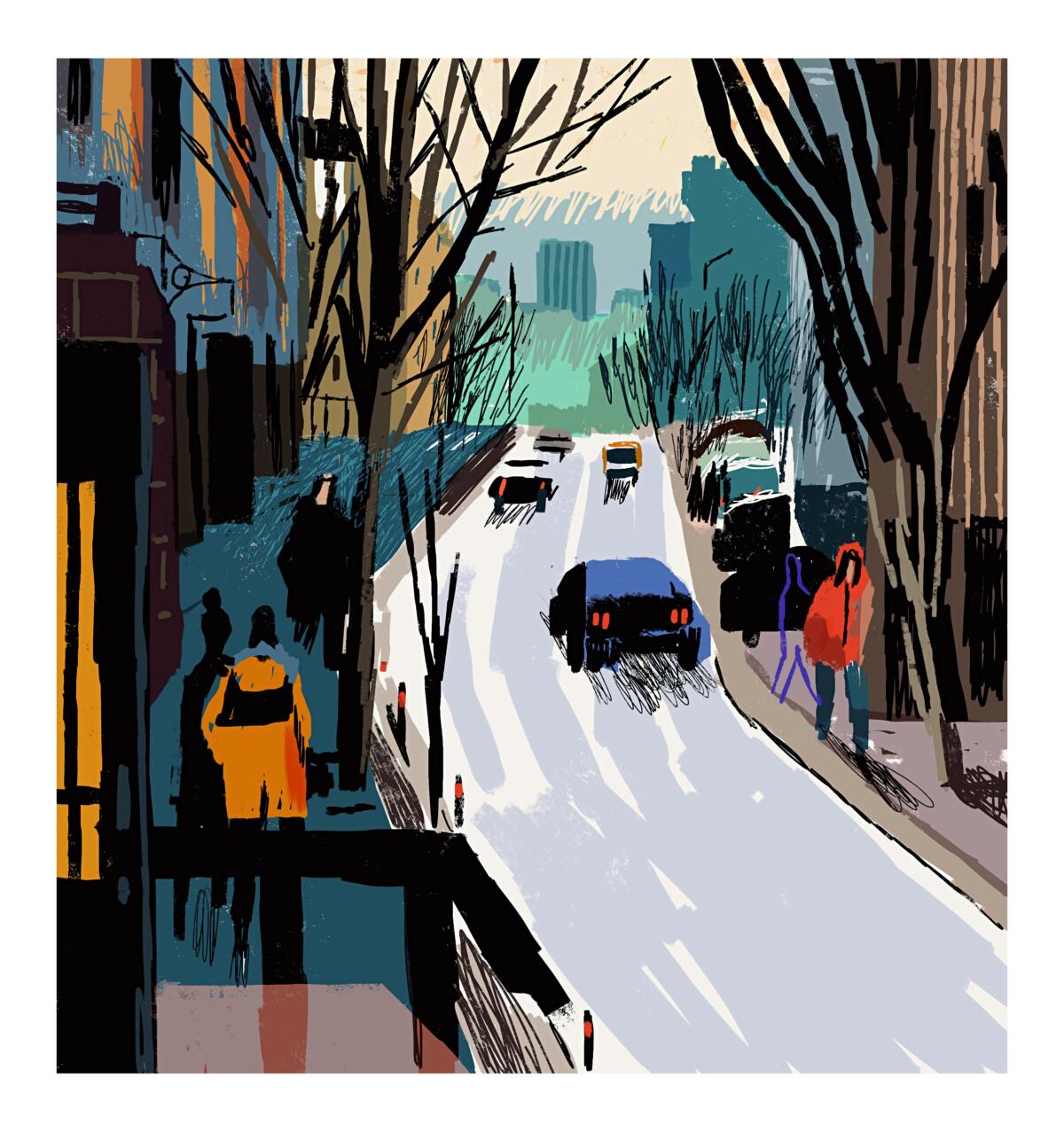 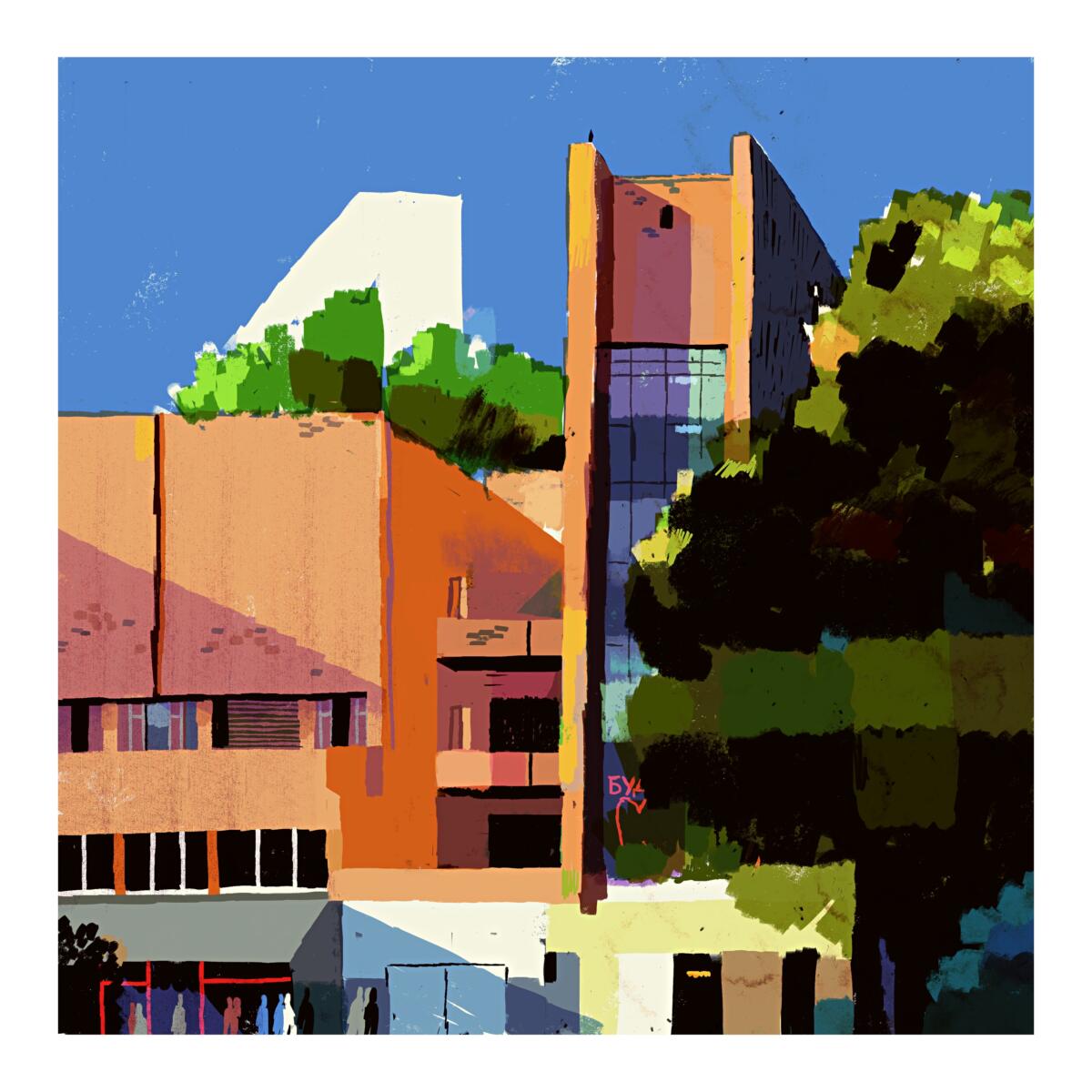 Evacuation tower of Oleksandrivska hospital, view from Machnikova St., an illustration, from KYIV by Sergiy Maidukov 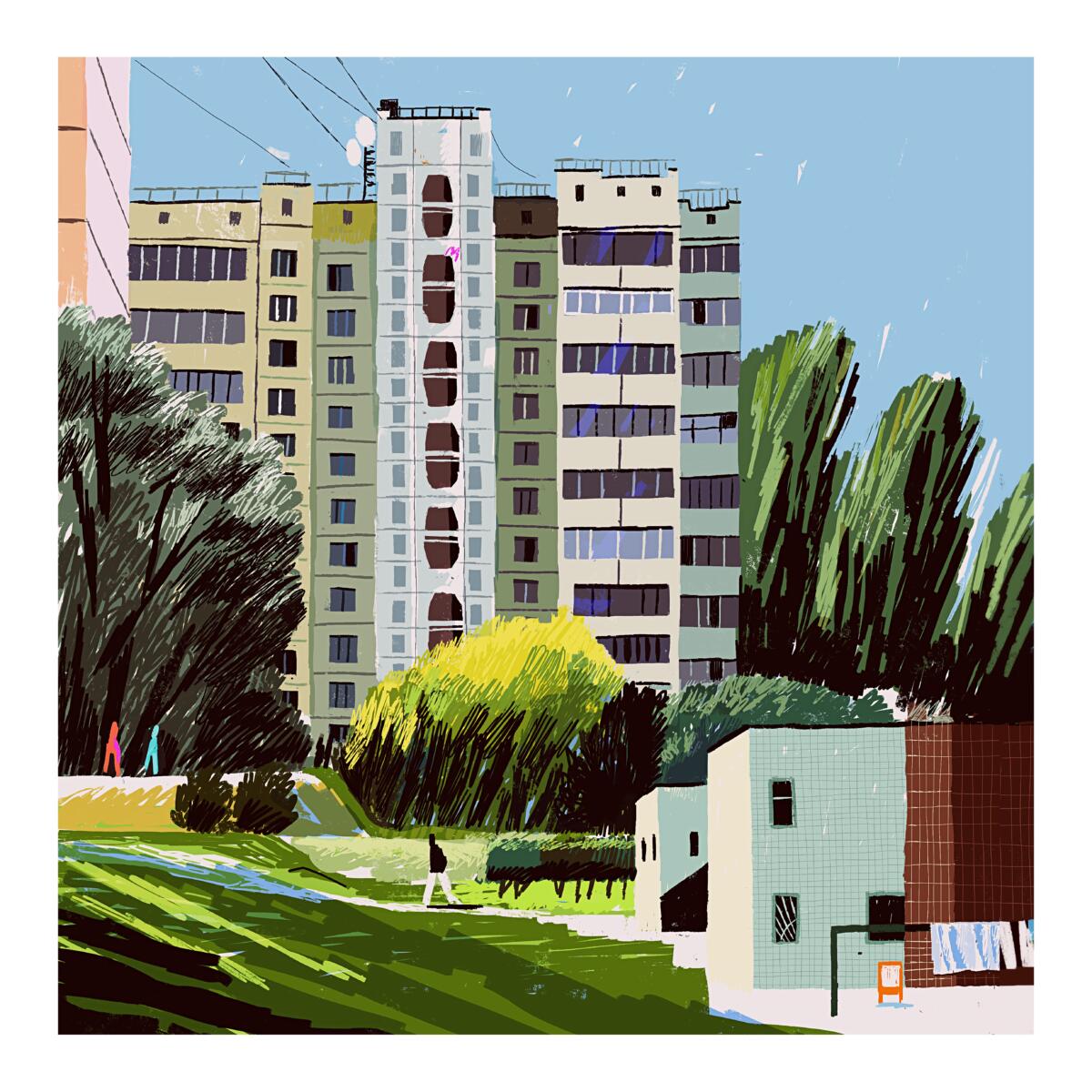 I also remember that we discussed how the book should end. The art book had to have a mood. What was this moment  like for you?

The book begins with my favorite picture. It was my right to choose. 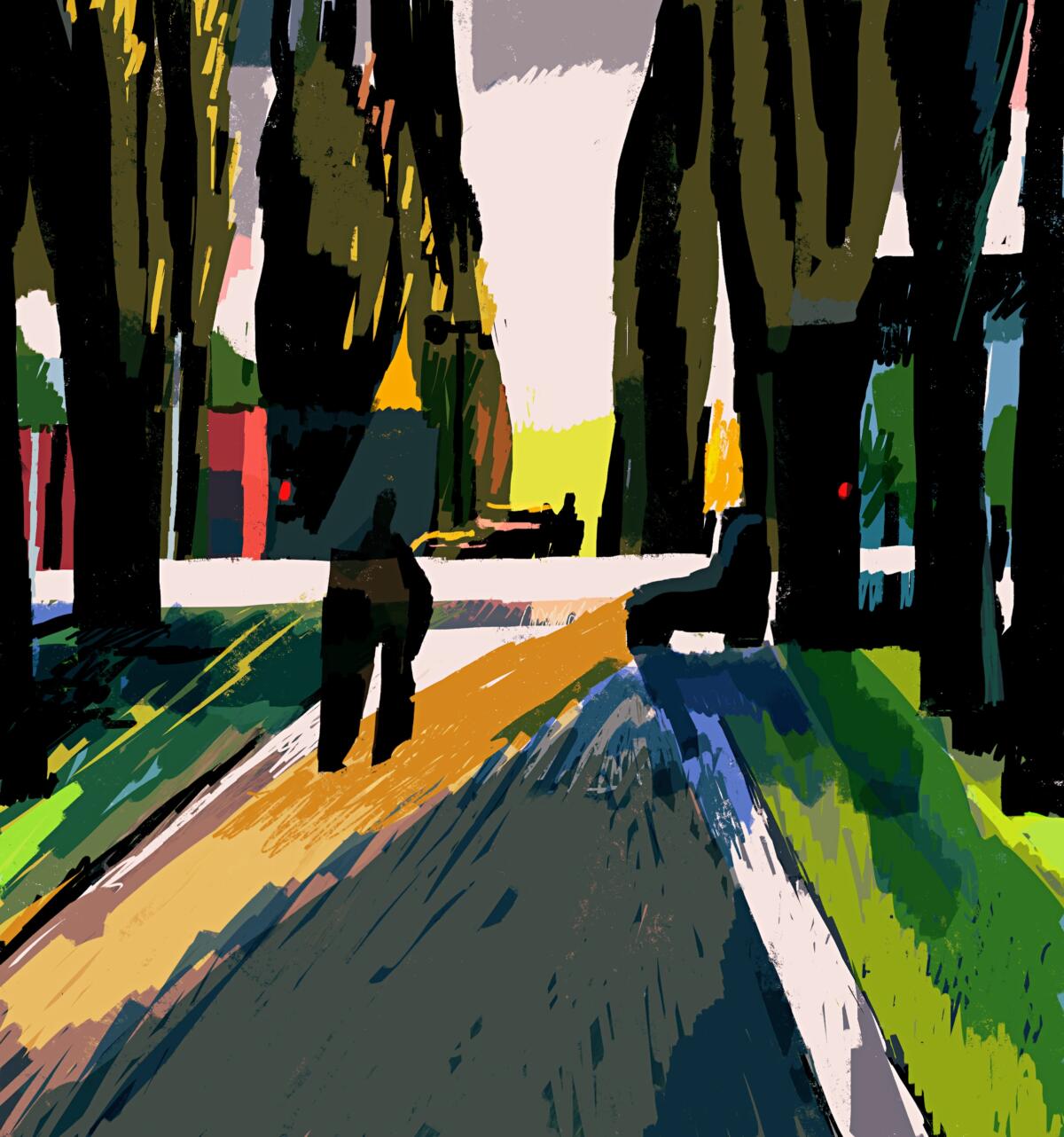 Tarasa Shevchenka Blvd, an illustration, from KYIV by Sergiy Maidukov

Yes, Shevchenko Boulevard, where you and I met several times. And the end of the book had to be elevated. I didn’t want to finish it with something expected, routine. And I didn’t want to finish it with Kyiv architecture either. Such a conclusion could imply that the book is about architecture. But it is about life in Kyiv. So, it was necessary to use herean important event, which was my  work about the Heavenly Hundred Heroes. It is a tragic note to end the book, with  a picture of white shadows of people walking among green trees. In fact, this book is  a drama with  an epilogue. This art book is about the hope and the new life that Kyiv and the people living in Kyiv long for. 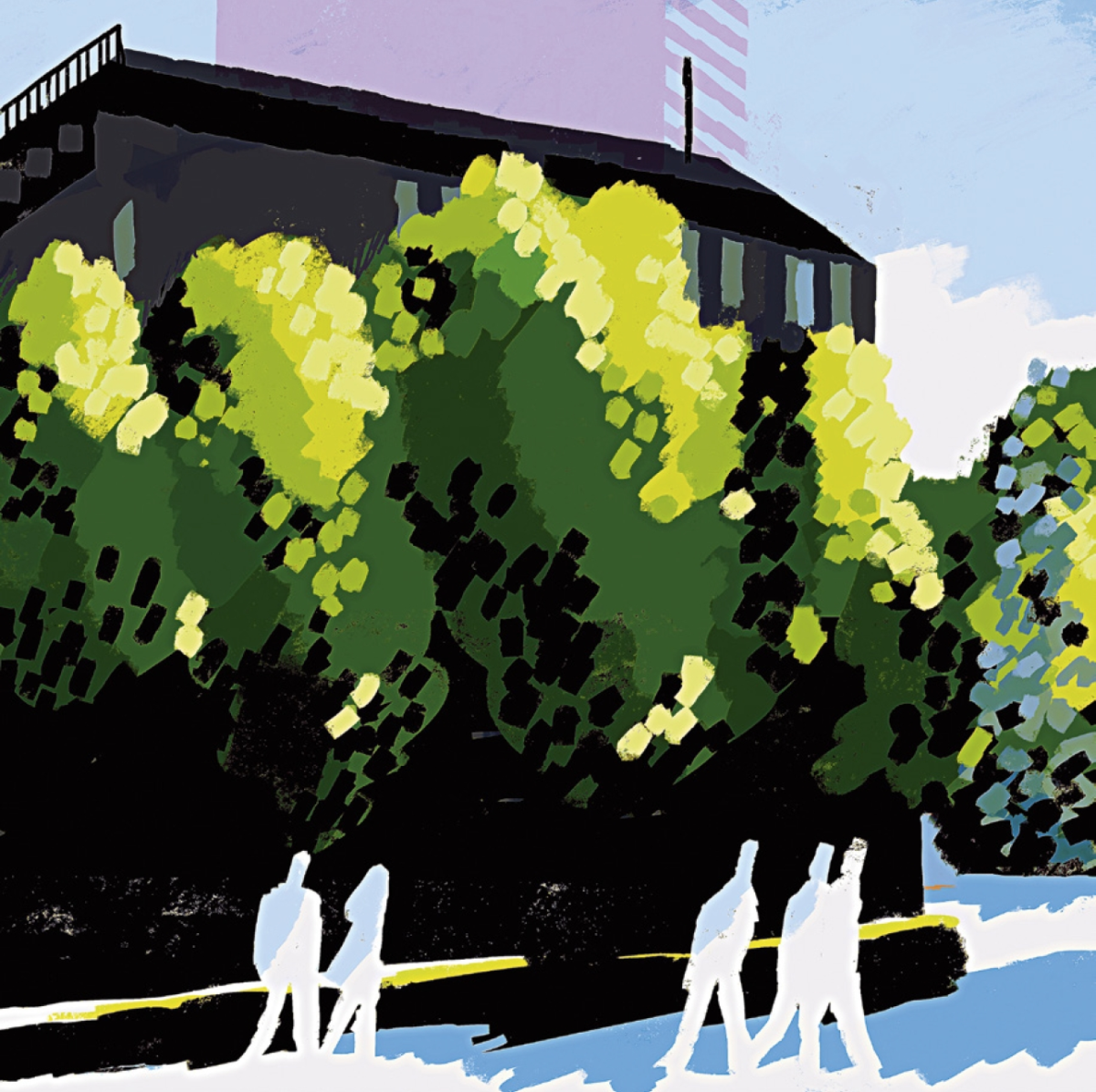 Kyiv, Velodrome area, an illustration, from KYIV by Sergiy Maidukov

How has Kyiv changed for you since the start of the full-scale invasion on February 24?

Today, it is much about the same. This will be an honest answer. But the first two months… If we make an analogy, I would say that it was like a healthy person whose heart collapsed and they fell down. Currently, Kyiv has risen and is warming up both arms and legs. 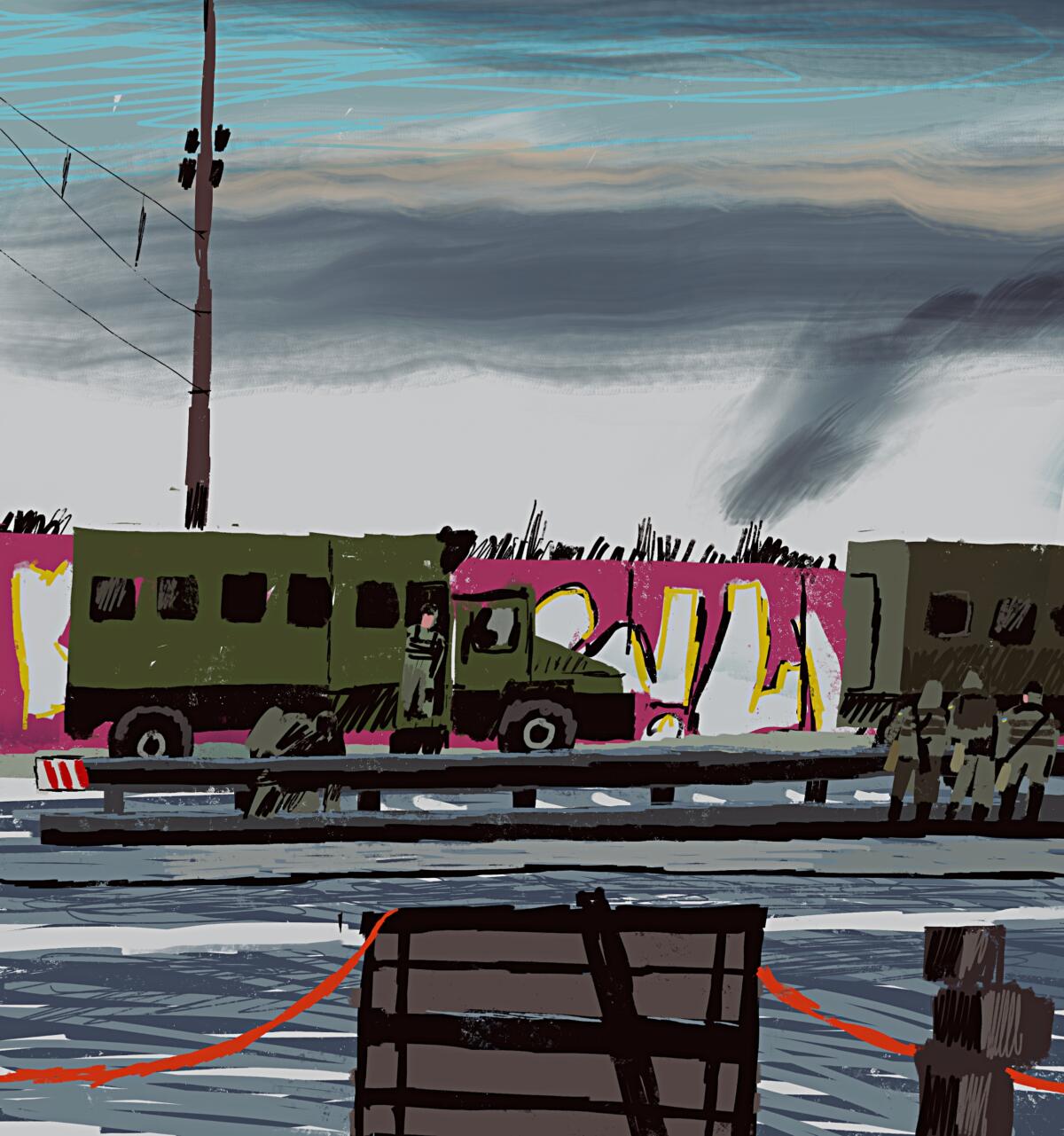 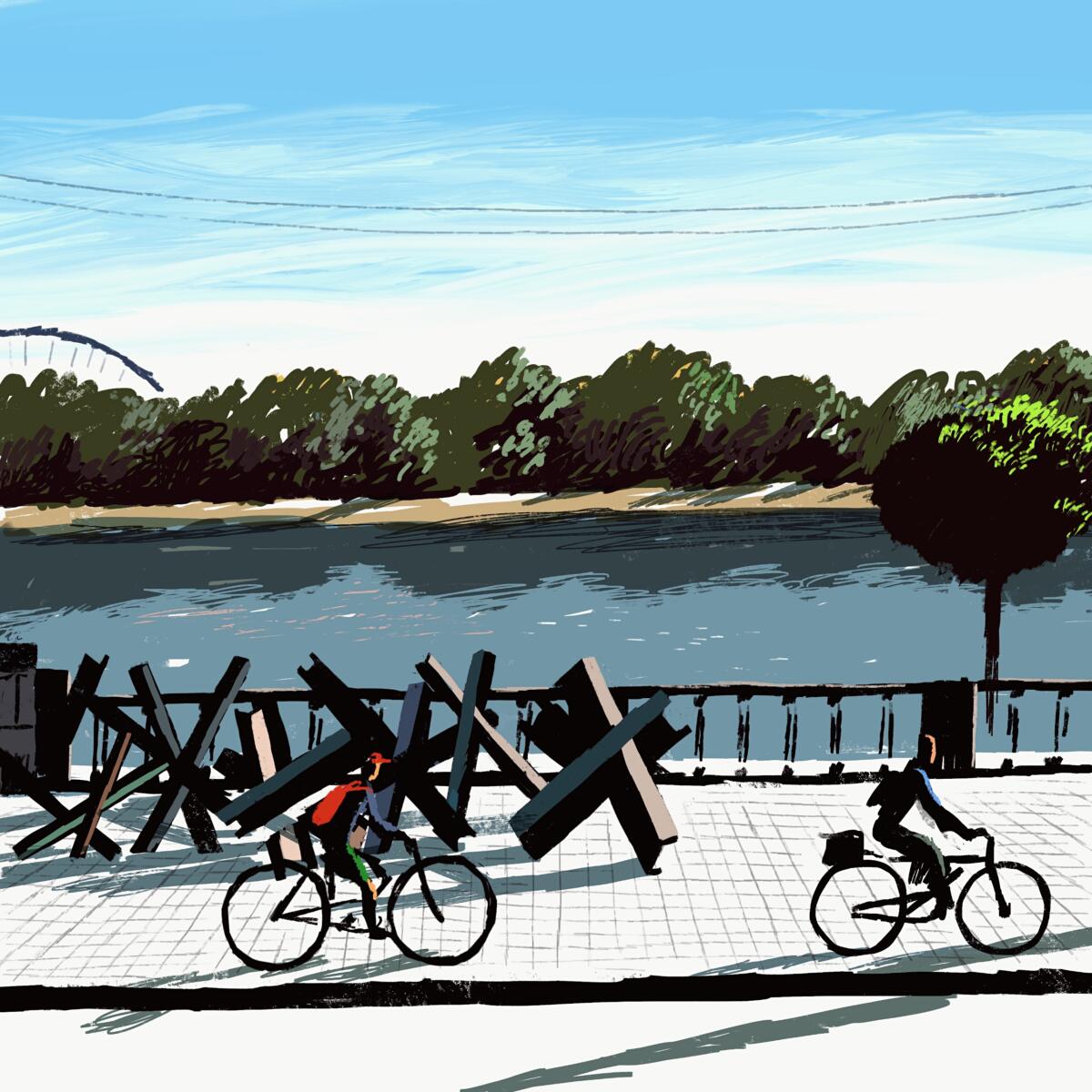 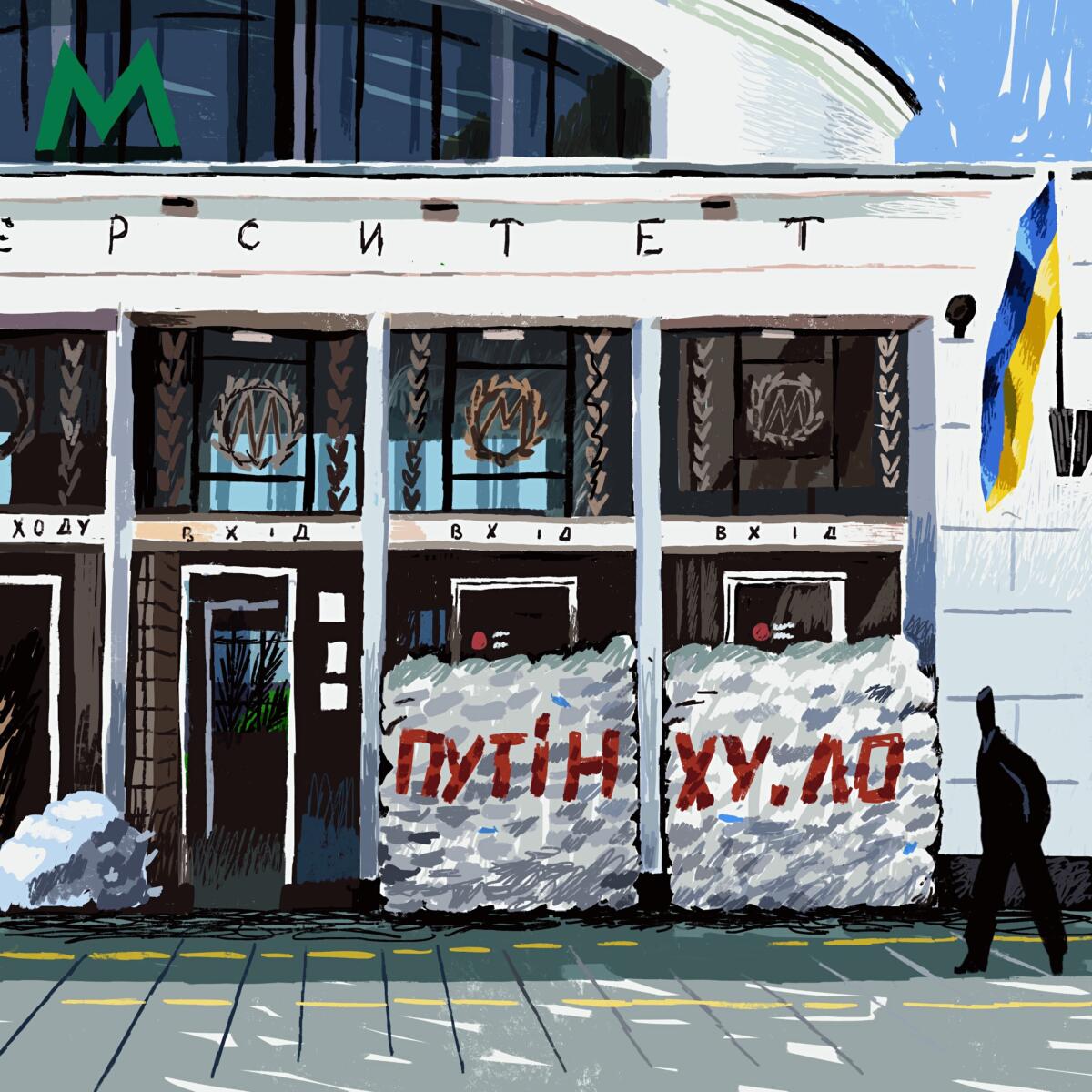 It is coming to life. In the context of illustrations, were you able to work with the theme of the city in those first months?

Yes, I had a need, an almost unconscious drive that had two components. The first thing was to create a routine that would allow me to keep my feet on the ground. I know how I stood on my feet and interacted with the city before. After the invasion, I was looking for the same thing – ground connection. Another aspect is the unconscious urge to keep doing it because it is a short time which in any case will end in either occupation or liberation. It won’t last forever. The unique state of the city dictated the need for me to paint.

Did you think about these pictures of Kyiv in the context of a new art book?

Yes, I immediately thought about an art book, unfortunately. I mean, it would be good to say no. But I really don’t want to draw ‘for the sake of art’, but so that people could experience with me what I experienced. Because everyone asked at first: “What did you do in the first months? And where were you? And what did you see? And I saw this! And those tanks? Did you hear the Air Defense Forces?.” I think this is the best way to share with people what I felt. If I have such a lever, I would like to use it.

Translation from Ukrainian into English by Julia Didokha

Sergiy Maidukov is an Ukrainian artist, who has been working as an illustrator since 2011. He collaborates with different foreign magazines and media such as The New Yorker, The Guardian, The Wall Street Journal, The Financial Times and others. Maidukov also illustrated several books, including “Executed Renaissance” by Osnovy Publishing House and “2001: A Space Odyssey” (2016) by Moppet Books. Several of his illustrations are in The Library of Congress (USA). Maidukov’s works were featured by 3×3 Mag Magazine, AIGA The Eye on Design, and on The AOI’s longlist. Since 2015, Maidukov has been curating regular illustration workshops.