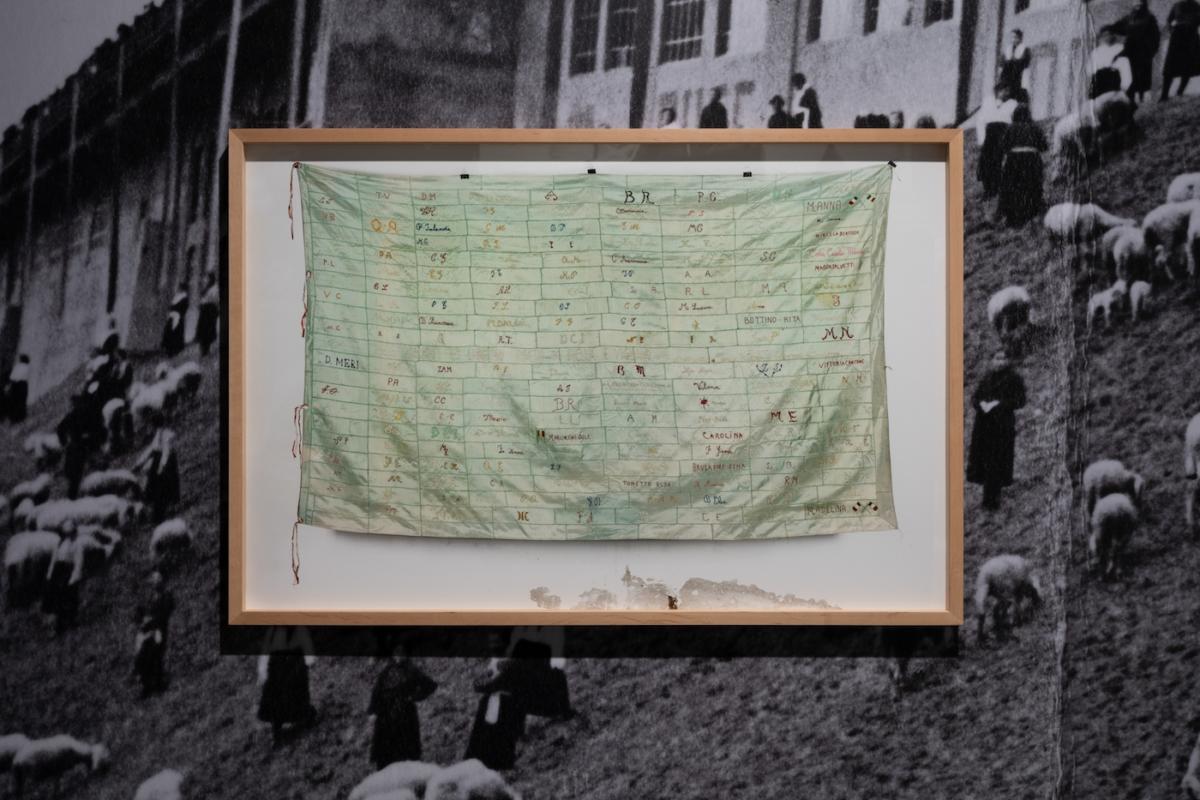 Vladislav Shapovalov, Green Flag (2018) © GARAGE Museum of Contemporary Art
The exhibition at GARAGE highlights the invisible labor that lays behind the mass production of clothes that is based on the principle of isolated actions and reduced gestures.

Walking through The Fabric of Felicity exhibition at the Garage Museum, I couldn’t help thinking about the 2015 song by a German avant-garde band Goldenen Zitronen, entitled If I Were A Sneaker. The song talks about the juxtaposition between Europe’s closed-door immigration policies and the free global movement of consumer items. Replacing the conventional museum labels with clothing tags that indicate the origin of work as well as its site of production, the exhibition emphasizes networks, that are subdued to the forces of capitalism and points out the ambiguity of the system we are part of. It outlines geographical connections of the 21st century Silk Roads – from Sweden to Bangladesh, from Russia to Italy, rendering visible histories in which fabric becomes an equalizing force, a trace of struggles, and a projection for fantasies.

The stunning black velvet dress Buried Treasure of Beverly Semmes, whose infinite sleeve sprawls across the museum floor, creates a ghostly sensation of an absent femme fatale. Its unusual length echoes the neighboring constellation of works that present the plot of Disrobing of Draupadi – a story from the famous Indian epos Mahabharata, in which the God Krishna makes Draupadi‘s sari infinite and protects her from public humiliation. A carved elephant tusk, a Madhubani folk painting, and an excerpt from the popular Indian television adaptation of Mahabharata; depict the dramatic and miraculous scene as the layers of Draupadi’s sari begin to unwrap endlessly. The curators of the exhibition highlight this story as a metaphor for the current state of the textile industry in South Asia. However, there is one correction; they point out: ‘‘the supreme power producing infinite fabric is no longer Krishna, but capitalism‘‘. The formation of capitalism, just like the deity of Krishna, dictates the organization of life; the working hours, the way we dress, what we desire; these processes are addressed by the curators through the speculative concept of Krishna-capitalism. In the words of Iaroslav Volovod, ‘‘Krishna-capitalism is a pharmakonian construct‘‘; it‘s a highly ambivalent system in which clothing can become both a prison and a stage for freedom. ‘‘Perhaps it‘s because the production of clothes involves so much human agency‘‘ – he adds later. 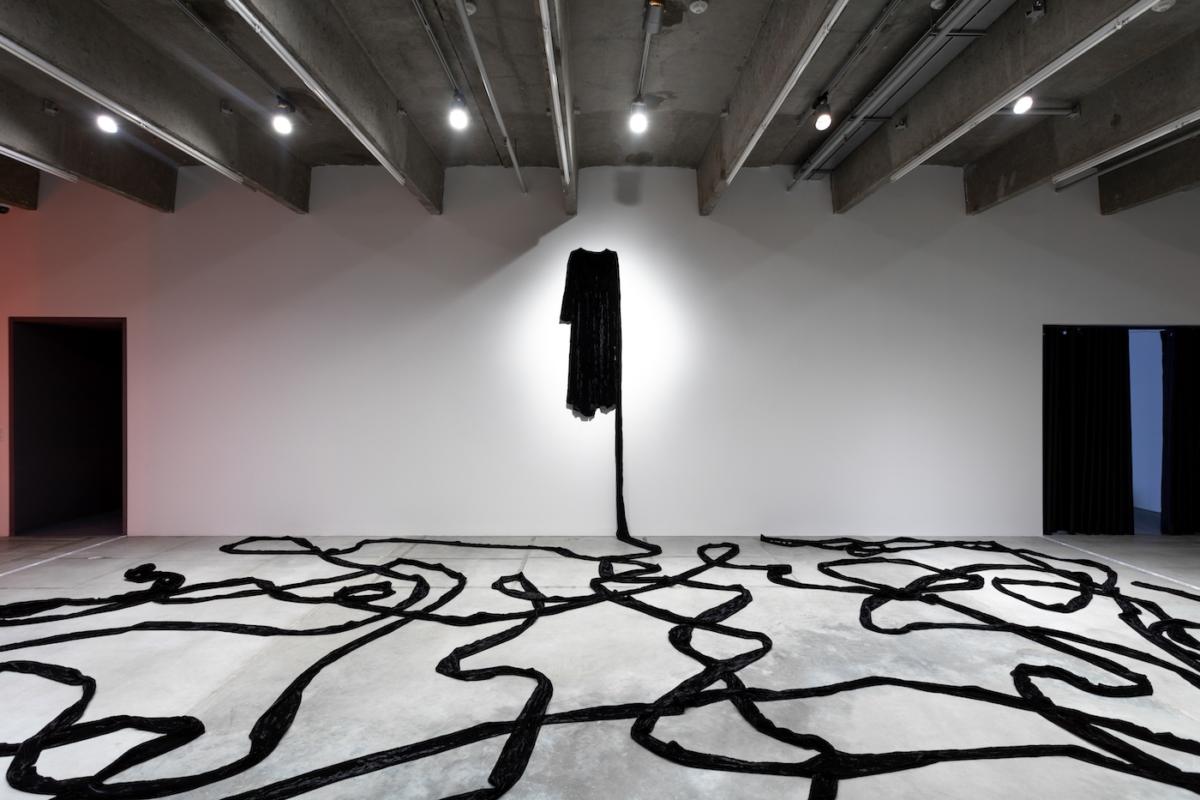 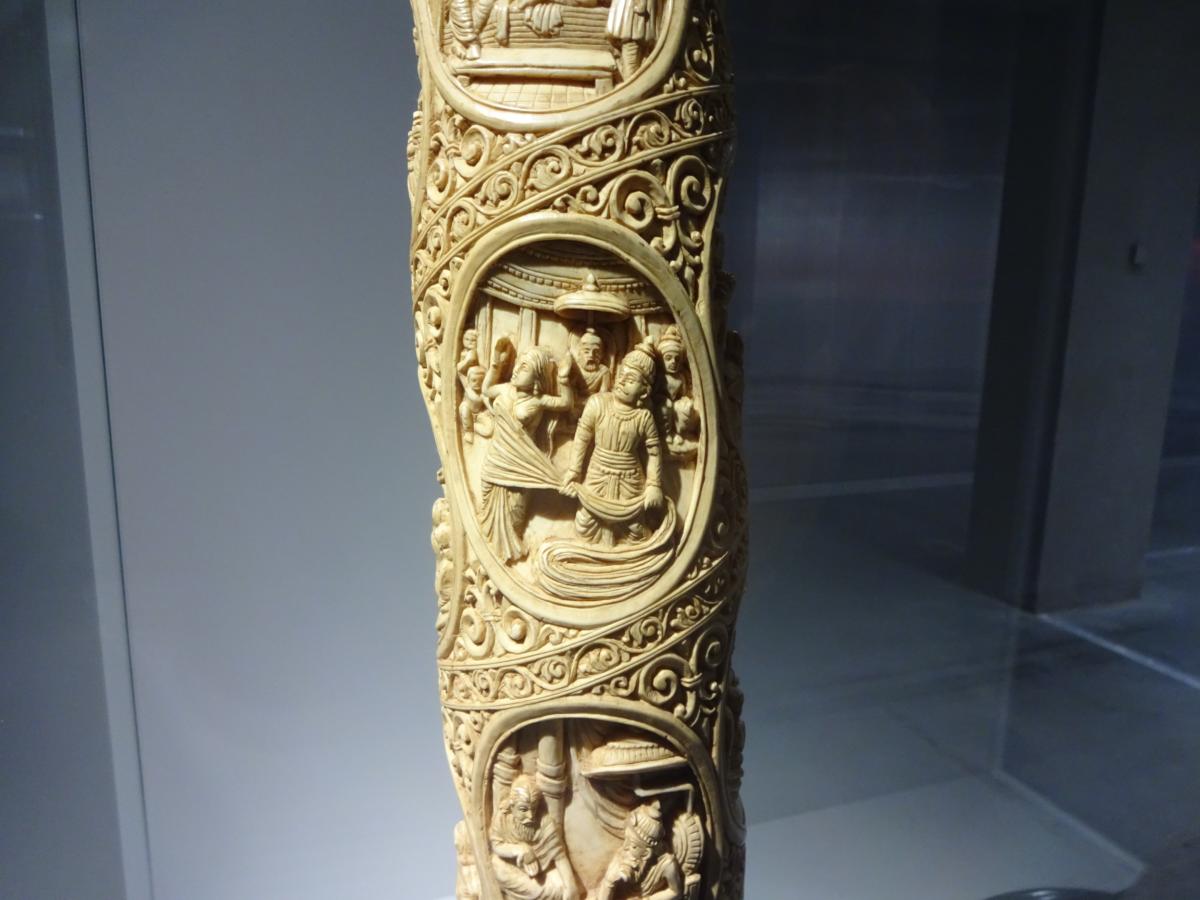 The Endless Sari, Overproduction of fabric in an Indian epic © Mirela Baciak 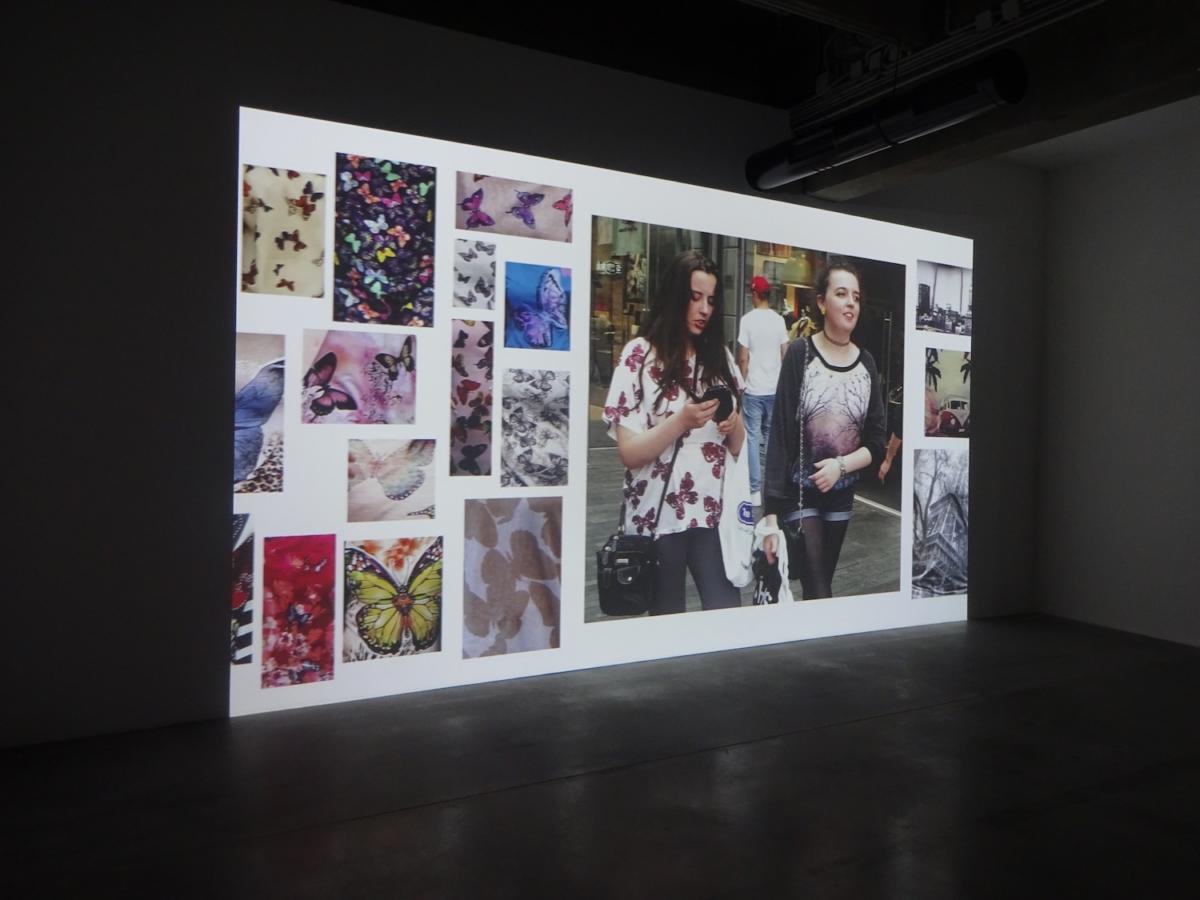 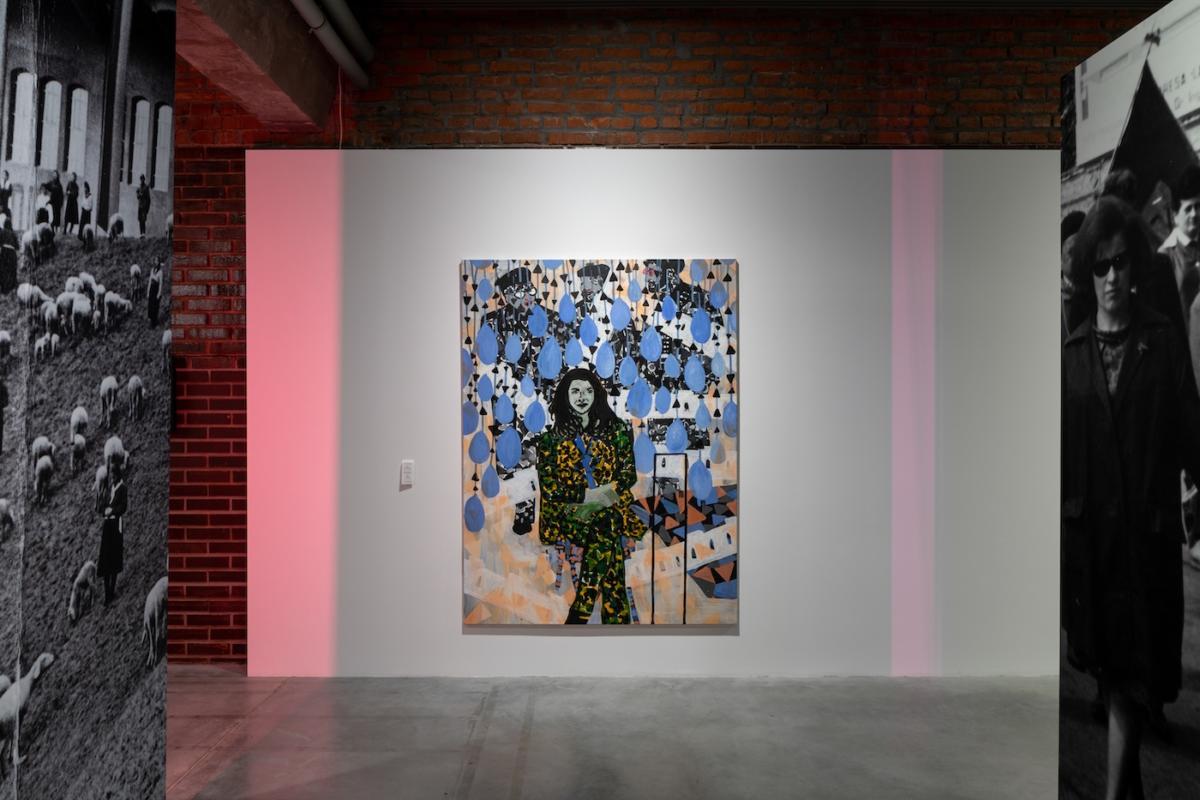 The Street & Modern Life by Hans Eijkelboom is a slow-paced video presenting a stream of photographs taken in the shopping streets of the world capitals. The artist arranges them like a human algorithm based on similarity of clothing and accessories. Black jackets, striped neck-ties, red lipsticks, shirts with butterflies… seem endless. His video recognizes the growing uniformization of society. In a conversation, Eijkelboom points out that his work is essentially about the weakness of identity, and the opportunities it gives to capitalism. Perhaps the clothes that you own, own you more than you think. Sergey Sapozhnikov‘s photograph shows how a dressed body becomes an abstraction. The body depicted in the image takes an almost hysteric pose, as if it wanted to break free from the patterns it‘s entangled with. Hamid El-Kanbouhi’s Zee-man portrays of a woman dressed in a unique suit. The figure is clearly distinct from its background through the use of color, but at the same time connected to it in the overall patchwork structure of the painting. The title of the work references the Zeeman effect – a phenomenon in physics that describes the discrete change of the energy level of electrons in a magnetic field. The suit of the women in the painting is remarkably similar to the outfits of the museum staff, which are an element of a project by Swedish duo Goldin + Senneby. This unintended visual rhyme stresses the tension between the artwork and its outside that is at the center of their multi-part piece Standard Length of a Miracle.

Replacing the conventional museum labels with clothing tags that indicate the origin of work as well as its site of production, the exhibition emphasizes networks, that are subdued to the forces of capitalism and points out the ambiguity of the system we are part of.

Standard Length of a Miracle is a short story, a costume, a reading, a setting within the exhibition space dedicated to public activities, and most of all the space between all these. The story written by Jonas Hassen Khemiri follows the thoughts of a migrant laborer in Stockholm, who works at a dry cleaner and aspires to belong to a higher social stratum. He admires the way art students dress and is determined to find access to this milieu. He changes his name to Anders Reuterswärd and makes new clothes from the remains that have been left at his workplace. The story functions as a manual for production. Its parts are being animated in the space of the museum, letting fiction cross over to reality. An oak tree grows out directly from the floor, resembling a setting from a fairy tale; museum attendants wear costumes designed especially for the exhibition by Tigran Avetisyan from the garments that were left at a dry-cleaner in Moscow; one of the employees reads aloud the story every day at 14:12. Standard Length of a Miracle intervenes into the fabric of the museum itself by emphasizing its double role: as a site of presentation and a site of production. The involvement of numerous artists and museum attendants in the execution of the project calls attention to the role of outsourcing in the growingly neoliberal processes of art making. 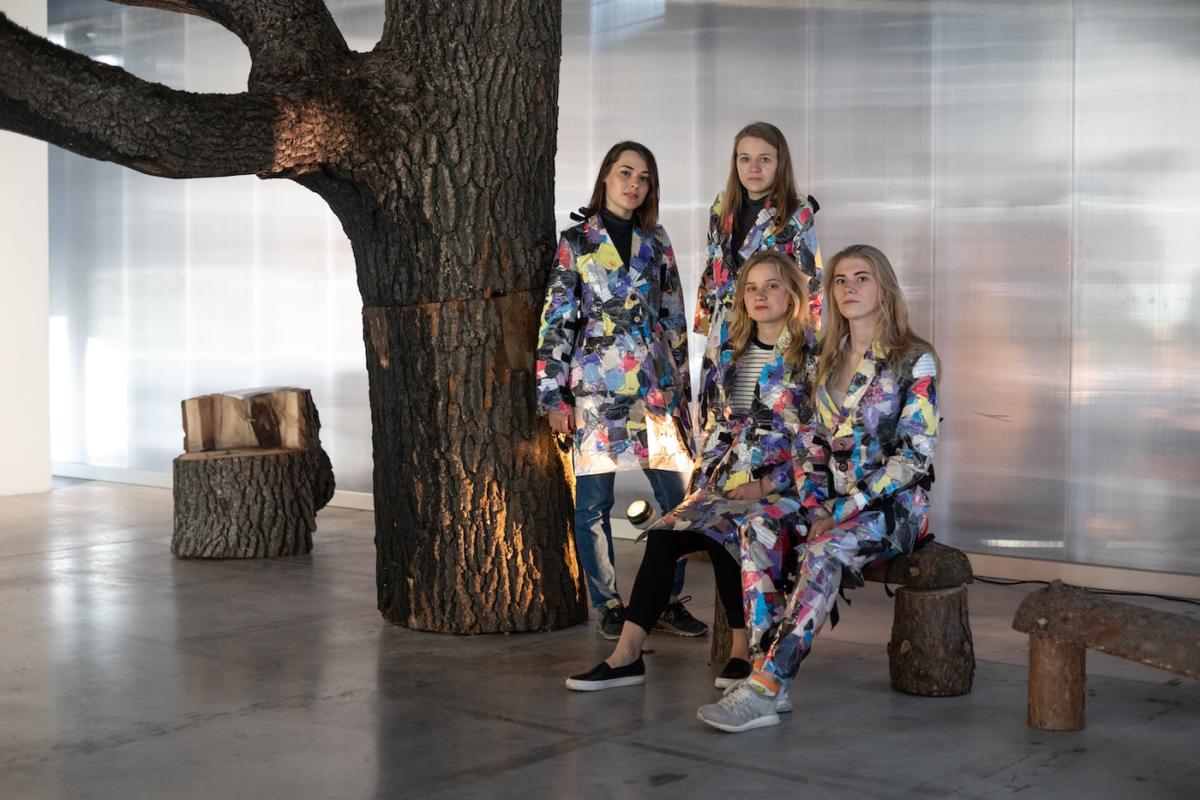 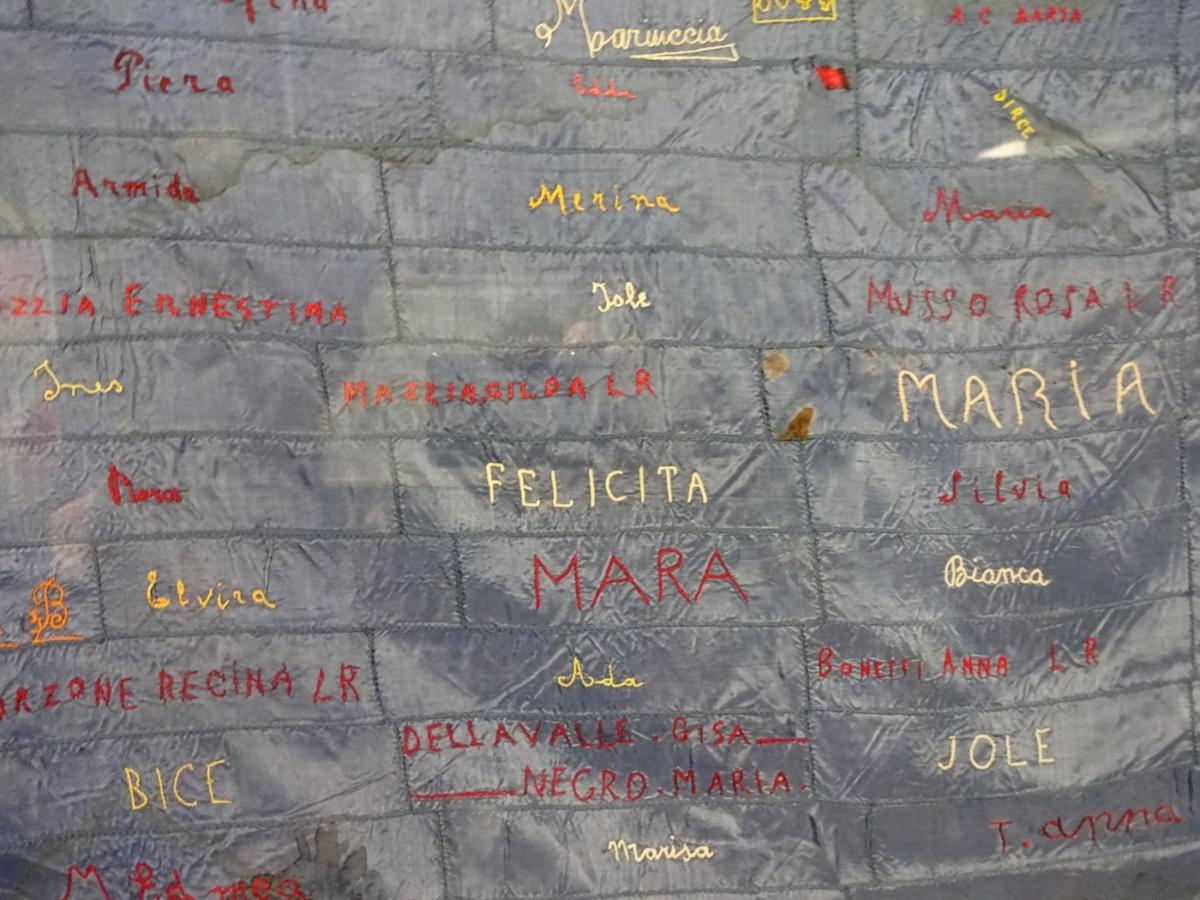 The exhibition highlights the invisible labor that lays behind the mass production of clothes that is based on the principle of isolated actions and reduced gestures. Vladislav Shapovalov‘s project offers a rare account of the labor of textile‘s workers from the Rivetti wool weaving factory of Biella and the ones from the spinning and weaving factory of Tolegno. The artist selected two flags from an archive of the General Italian Confederation of Labor in Biella, Italy, which show hand woven initials and names of the female workers. The flags reveal traces of people whose subjectivities are usually imperceptible in the final product. The video piece of Zarina Bhimji Waiting addresses the same aspect through the act of not showing. Her film focuses on the poetry of machines, leaving the actual workers beyond the frame.

The Fabric of Felicity creates a route that makes viewers rethink their relationship vis-à-vis apparently familiar objects. Clothes are, above all, tangible things that people engage with on a daily basis.

The most sensational pieces within the Fabric of Felicity are located in a section devoted to chthonic fashion, which considers clothing as a mystic medium of communication with spirits of the past. The work by Portia Zvavahera In One Accord seems to depict a dreamy space between the world of the living and the world of the dead. Little unearthly creatures with their heads turned upside down resemble a scene of a danse macabre. They dwell between the contours of a large animal and a veil at loose that provides them with distance and protection. The paintings of Hayv Kahraman are informed by artists’ personal history as an Iraqi immigrant. Her canvases are occupied by female figures; she manipulates them by cutting the linen and weaving them back together, creating structures within the canvas that are reminiscent of a traditional Iraqi handheld fan called Mahaffa – an item the artist recalls from her childhood. Her paintings reflect the process of adapting to new cultures while remembering one‘s origins. 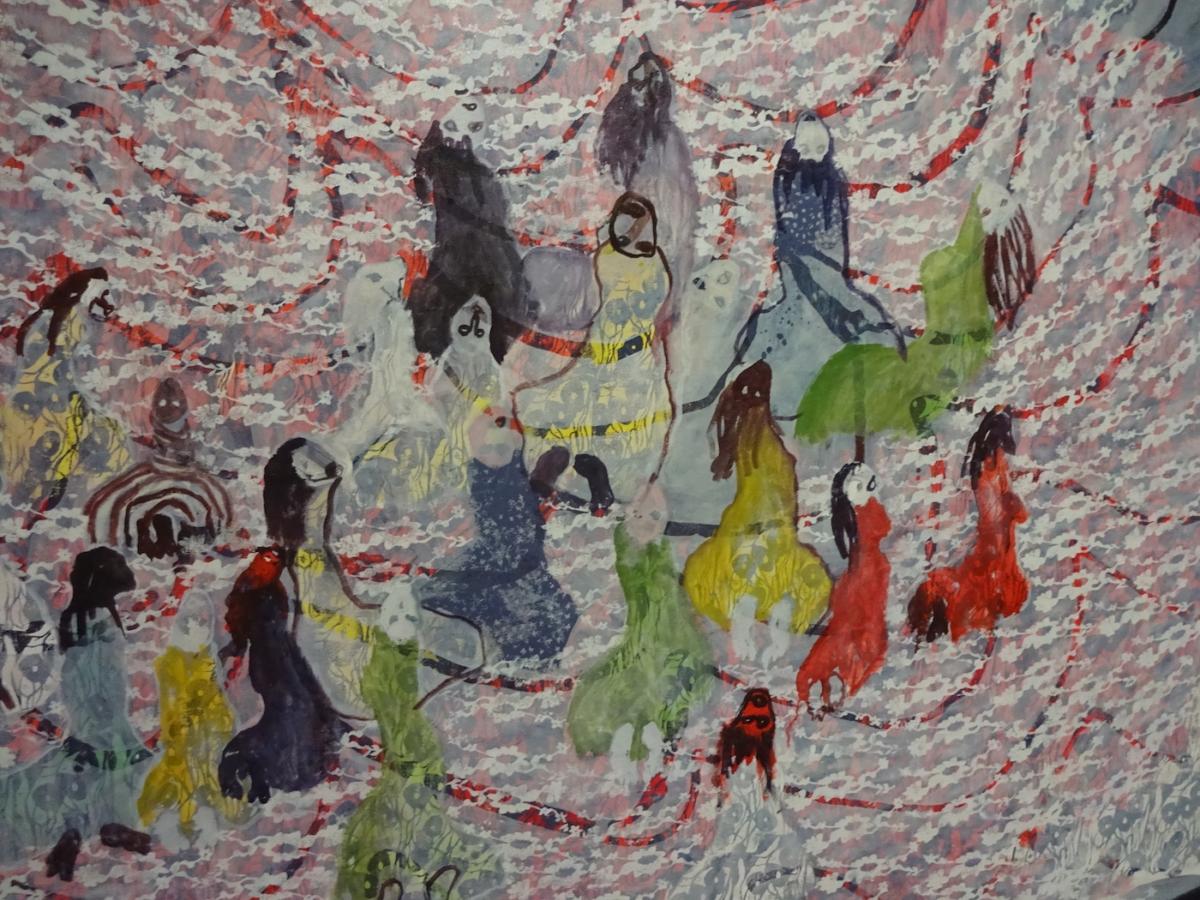 Portia Zvavahera, In One Accord (2018), detail © Mirela Baciak 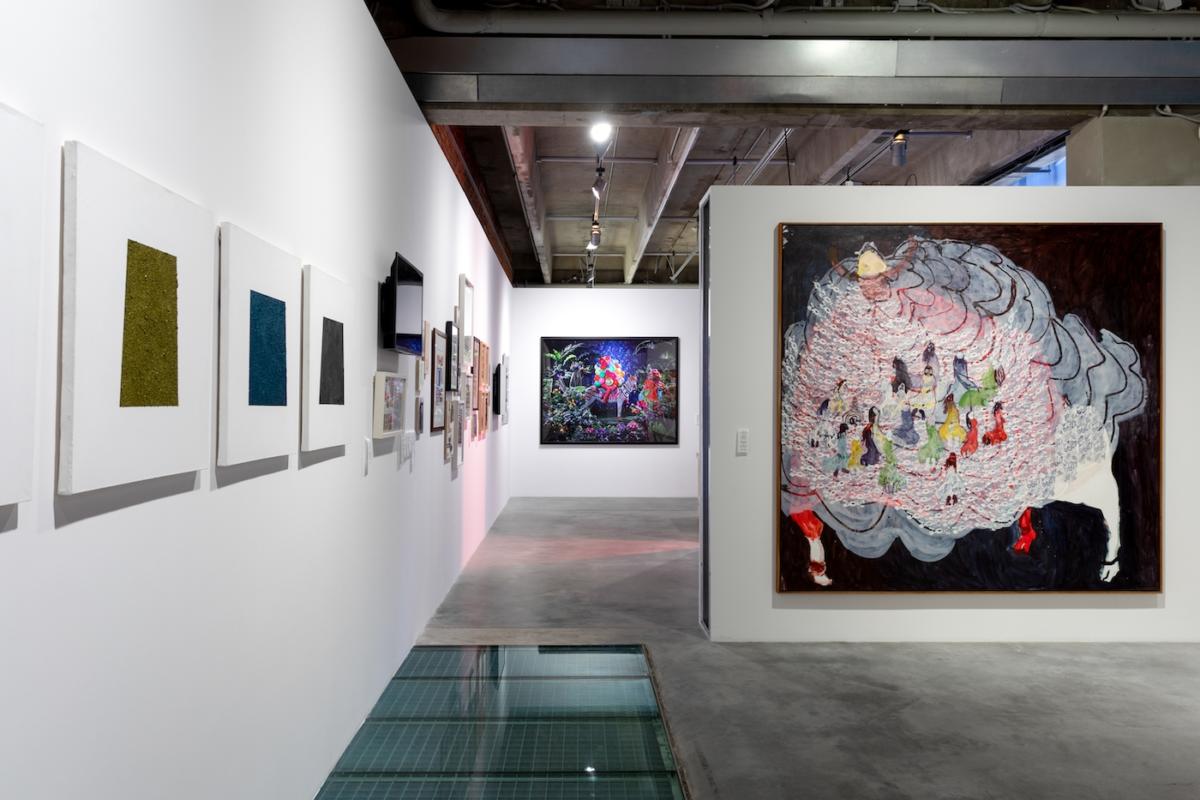 Portia Zvavahera, In One Accord (2018) © GARAGE Museum of Contemporary Art 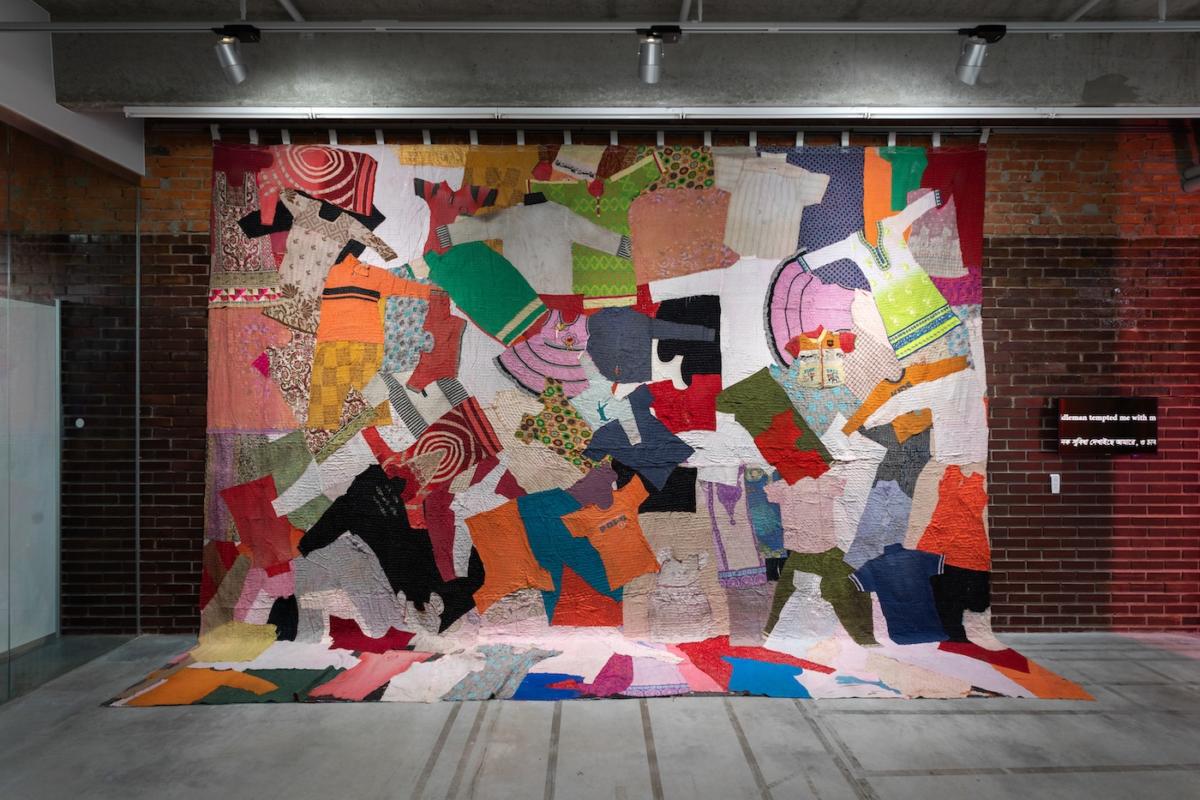 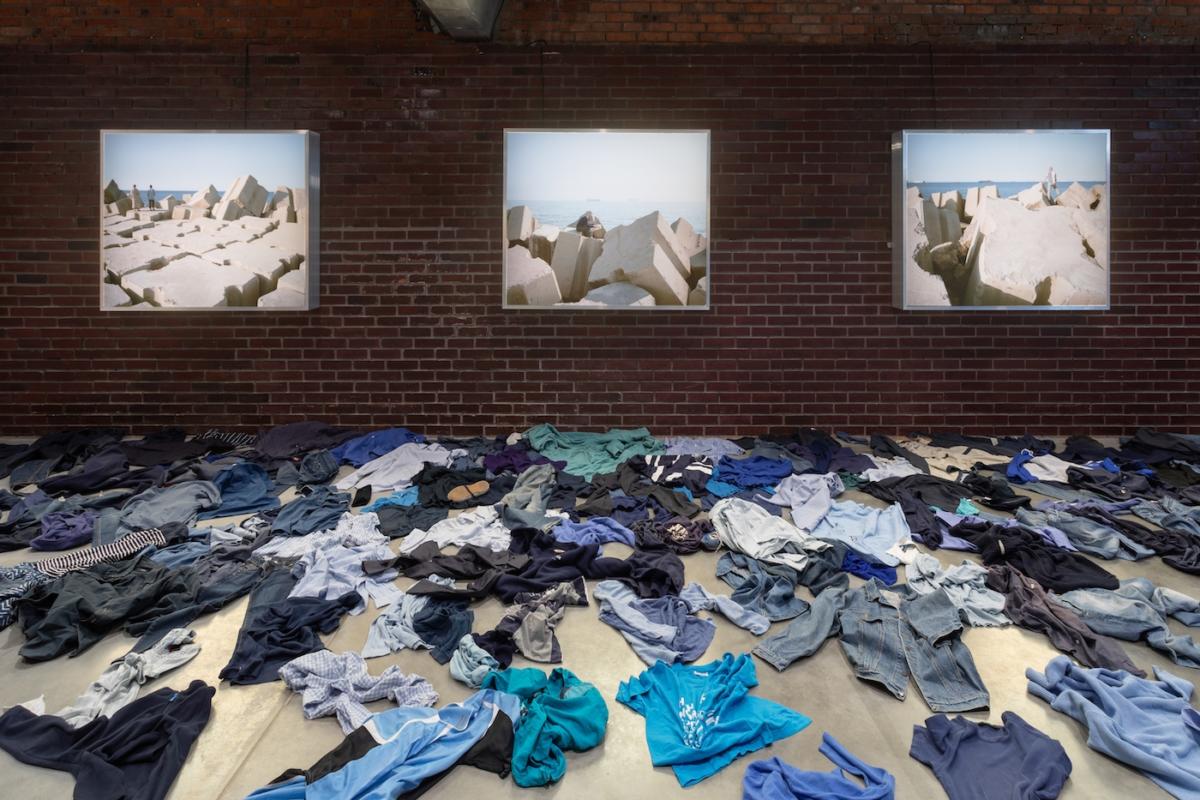 The exhibition is framed by two large-scale installations that commemorate the refugees and their experiences in different parts of the world. Heaven is Elsewhere is an extensive cloth that was created as part of a long-term community project initiated by Bangladeshi artist Kamruzzaman Shadhin in which clothes of refugees from Myanmar were exchanged for new ones. It poetically binds together garments of refugees in a ritual of stitching that is believed to have a healing power. At the other end of the exhibition Kadder Attia‘s piece Le Mer Morte serves as a memorial to people, whose lives were taken by the sea during the 2015 migrant crisis. It shows clothes in shades of blue that a scattered around the museum floor. The work is combined with a series of photographs from 2008, in which teenagers in Algier gaze into the Mediterranean Sea.

The Fabric of Felicity creates a route that makes viewers rethink their relationship vis-à-vis apparently familiar objects. Clothes are, above all, tangible things that people engage with on a daily basis. They form the first layer that mediates our experience with the outside world; they animate the body and its functions; but they are also carriers of signals expressing social differences, entangling us in loops of capitalist production and circulation.