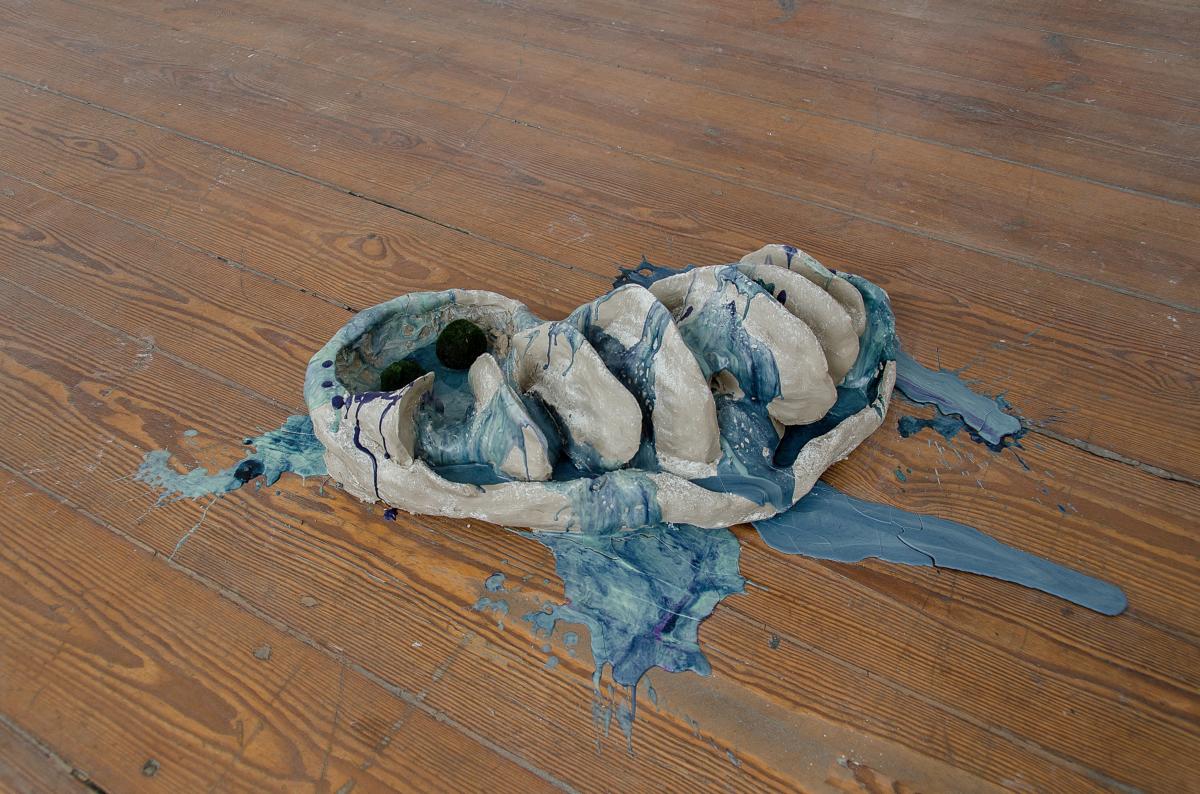 Katarina Hruskova and Miroslava Vecerova, Porous Whispers, exhibition view
Objects become obsolete in human confines but escape the need to establish a legacy. Although the works in ‘Porous Whispers’ were created separately by two individuals, they materialized into one singular breathe.

Porous: adjective
(of a rock or other material) having minute interstices through which liquid or air may pass.

Whispers: plural noun
1. a soft or confidential tone of voice; a whispered word or phrase.
2. a slight trace; a hint.

On my hands and knees, beneath the threshold of the doorway, I carved these words into the flesh of the floor. Using chalk, I left my own whisper—a simple gesture turned into an open invitation. This was part of my performance, Tracing Phantoms, a piece that continued the conversation artists Katarína Hrušková, and Miroslava Večeřová began in their exhibition Porous Whispers. The exhibition is the second part of the exchange project entitled “PING PONG: artist-run spaces”. Using different artistic approaches, yet focusing on the centrality of objects, each engaged in the concept of ‘New Materialism’: blurring of physical, and theoretical distinctions between the material and human realms, while flattening the power dynamics that rule them.

Chalk is a salt mineral that is also known as calcite. Salt is historically used to ward off negative energy in spaces. It is applied to doorways so that evil spirits cannot enter. In metaphysics, calcite is used to absorb energy and return it to the sender, having transmuted and amplified the intention.

What brought me there was my pursuit to bridge two worlds: the living, and departed through basic conversations. Ghosts, hauntings, and internalized histories became center stage as the linearity of time, and space collapsed inside of OS17. As I began my journey within Porous Whispers I asked myself, “Are things only defined by the traces they leave?”

After climbing two flights of stairs I arrived at what looks like an ordinary empty 1940’s flat. There were four rooms adorned by weathered wooden floors—people had once lived here, their words still rest in the unfilled cracks of the floor. The space itself appears frozen in a snapshot of time; where everything remains in it’s original construction except with slight variations. Nuzzled between optic white walls sat frosted windows. A soft, but cold glow emanated from them, flooding the room. Naked spaces have a way of drawing your focus on the material. 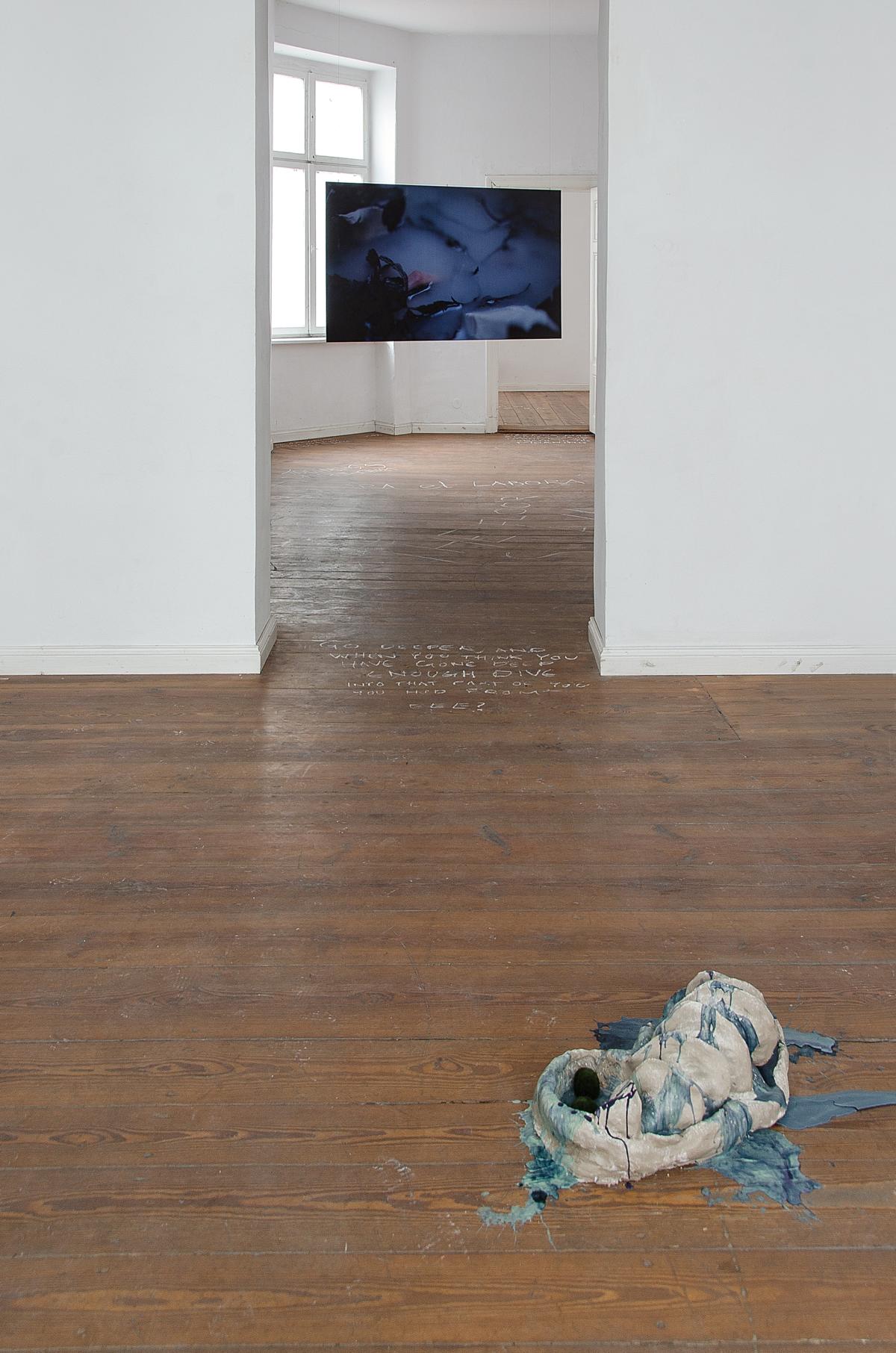 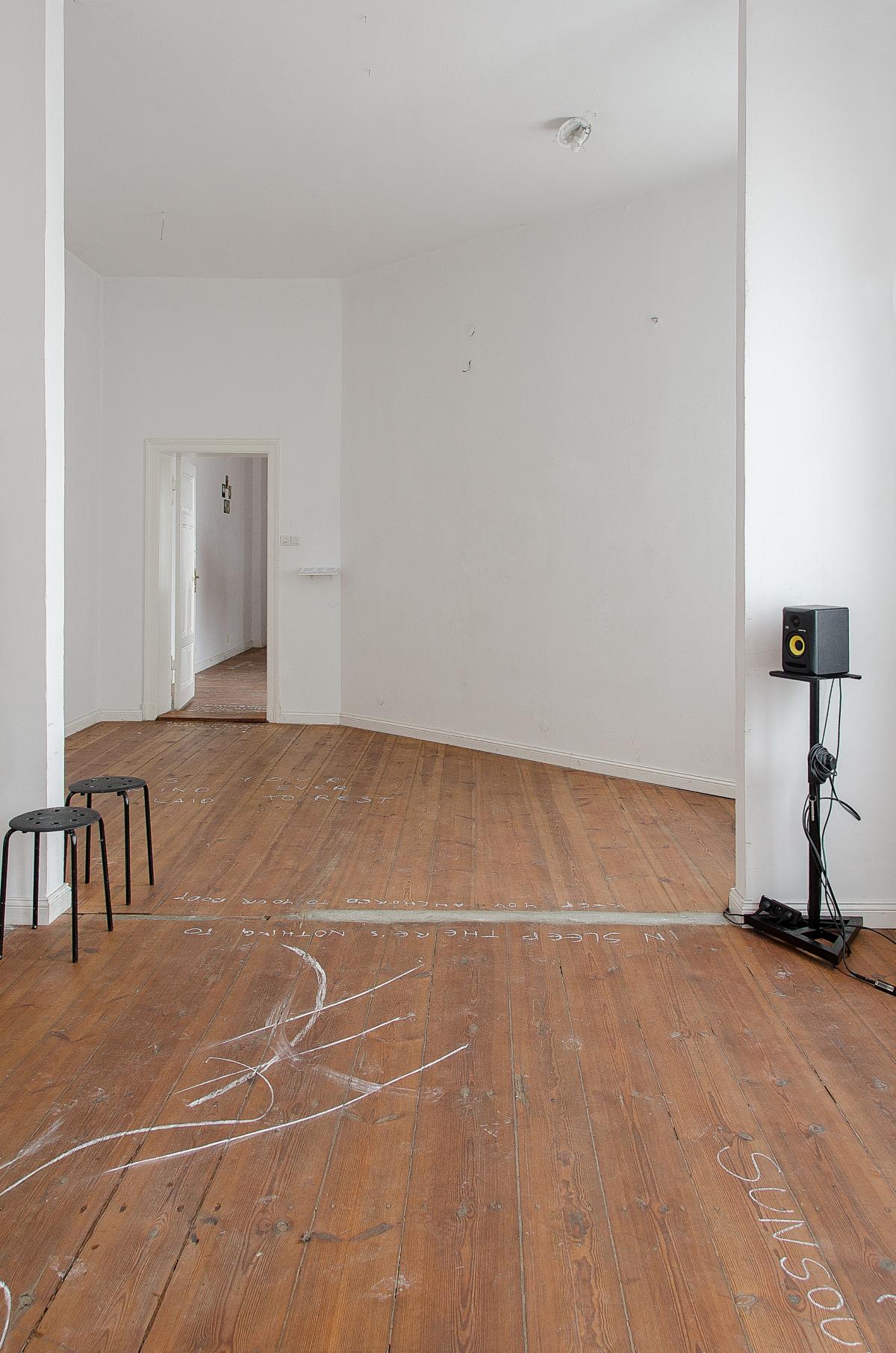 what is justice
paint the picture inside of my skull

Chalk (calcium carbonate) is a salt mineral that is also known as calcite. Salt is historically used to ward off negative energy in spaces. It is applied to doorways so that evil spirits cannot enter. In metaphysics, calcite is used to absorb energy and return it to the sender, having transmuted and amplified the intention. I continued to write in front of the next door, hoping pieces of the messages would travel with each visitor’s footprints, thus transforming the previous narratives held within the space.

As I crossed the entrance of the first room, I was greeted by a large, amorphous mass.
I immediately knew I had entered into Miroslava Večeřová’s trifold world. The structure made of expanding foam, at first glance, looked like an avant-garde bench, yet by changing one’s outlook, it becomes a vehicle into her film, Bones and Neighbors. Not simply a love poem between a rock and water, Bones and Neighbors is a poetic installation about chalk. Although reminiscent of a love note, a tension accumulates shortly after the film begins. All your expectations suspend mid-sentence as the narrator is revealed. This disturbance of the status quo allowed for new depths of inquiry to occur. Normal conventions would not be at play here.

Bones and Neighbors is the result of an intergenerational collaboration featuring narration from her young son (Elvin Vecer-Russell), lyrics by her adolescent niece (Maya Campbell), and visuals from Večeřová herself. Picturesque wide-shot scenes of colossal chalk cliffs dissolve into close-up footage of her own aquatic sculptures. Much like the meeting between land and sea on a coastline, these different perspectives blend, mixing micro stories (individual) with existing macro conversations (society). What can we learn from the objects that are between spaces?

Acclimation, and displacement are two themes that color the piece. As the water professes, “[a] rock, that I couldn’t help but break myself against”, one can extend this uneasiness to the emotional landscape of an immigrant. This mirrors the life of Czech-born Večeřová, who had to adapt to a new culture when she migrated to the United Kingdom to attend university.The adjustment to a new environment can cause a deeper awareness of the materials around you, as one’s senses heighten, due to new stimuli. Time yields as sedate camera pans practically lick the screen. Careful attention is paid to the different textures within the alternating landscapes. These frames dance between macro and microspheres reflecting Večeřová’s interest in shifting axles of power (agency, voice), and perception.

“Darling I’m fixed in my ways.
In, out, in, out
Your swooshing ripples
Whisper of a gradual
And reachable change
Longevity, you say
Maybe one day”

This last line grounds the interwoven story as an accessible learning resource. The archive of knowledge lodged within the material world now revealed, is made tangible.

you awake from the dream yelling “don’t let me disappear, let me appear” 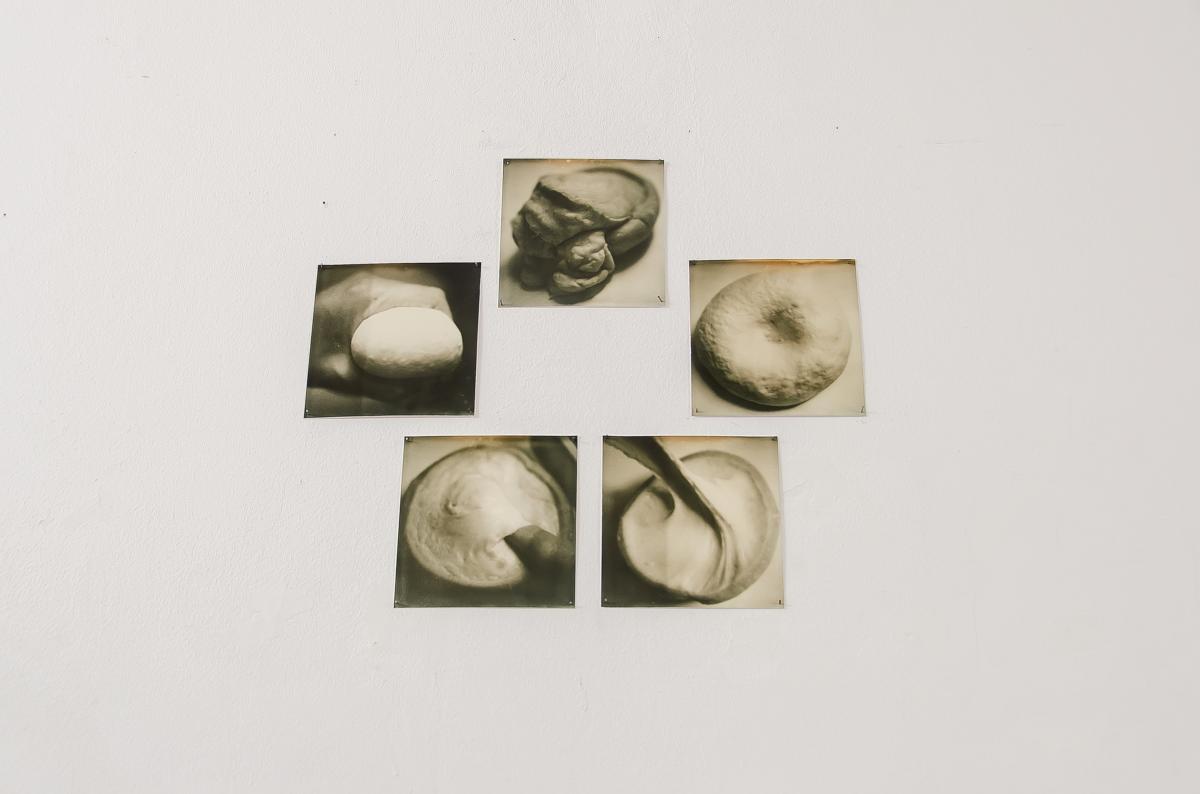 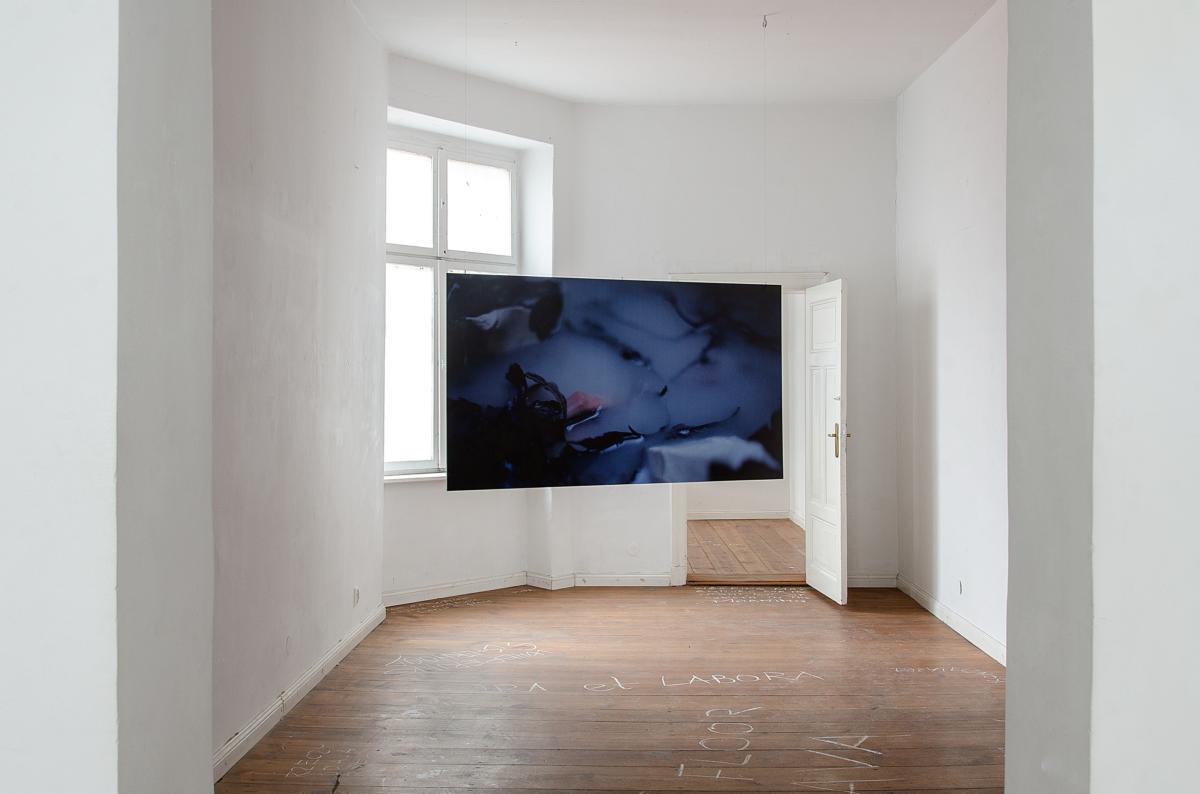 Chalk was one of the first tools used in prehistoric times, not only for basic communication but for artists to share their stories. These stories still rest in many caves, and have been used to investigate how life was back then. These drawings are as valid in the retrieval of history, as the human bones that were found. Večeřová, in the vain of her prehistoric ancestors used it for drawing with one added layer. It now has the ability to draw out one’s emotions and make them visible.

I glided into the next room where two replicas of the sculpture within her film continued to chronicle her journey. The set of sculptures, Ear Ponts is based on a tiny bone found within the inner ear. Each piece is a half of the bone allowing you to peek into a landscape typically unexplored by the human eye. The wet installations are completely made by organic materials (soy wax, clay) in order to function as an ecosystem for living organisms (water moss). A

prehistoric history repeats, as a gradient of blue glaze splashes through the piece ending in drips atop Stegosaurusesque plates.

Writing words makes them real. You can see the letters in a state of becoming with each stroke of chalk. The chalk itself began to get smaller, my right hand completely coated. Humans typically limit materials to their physical form, binding them to societal constructions. Perhaps, it’s a projection of our own mortality. Materials, however without human engagement, defy those perimeters and reject them. Was the form itself leaving its imprint on me? Who was the agent at work here? Yes, I was performing with the chalk but there would be no evidence of me after I left.

Večeřová’s last piece, Chalky Water is a blown-up still from Bones and Neighbors. Suspended from the ceiling, the piece is an encouragement to take a pause in movement. Blushed flesh breaks through the surface of a mysterious scape; documentation of human contact in an otherwise humanless terrain. This photograph allows the created world to function devoid of progression. Therefore questioning the way people relate to the natural world, and presenting an alternative way to approach it.

Chalk was one of the first tools used in prehistoric times, not only for basic communication but for artists to share their stories. These stories still rest in many caves, and have been used to investigate how life was back then. These drawings are as valid in the retrieval of history, as the human bones that were found.

Instead of trying to project meaning into the works, I decided to let the pieces wash over me. With cemented feet on the floor, I allowed my eyes to venture across the room seeking other displays of material ‘truths’. My gaze gently rested on five analog images of dough. Each image is part of Katarína Hrušková’s ongoing series, Treacle. The images, much like Chalky Water disrupt our relationship to movement. Each image documents the aftermath of action. The photos showcase the malleability of dough in result to different human interactions: a hand squeezing, a finger folding, and a thumbprint left in the material. Although these signs of human activity are there, the dough itself maintains as the focal point. Even in shifting form (shape, texture), the dough is still comprised of the same ingredients. We are made of the same stuff as stars, why can’t be stretch to new heights that don’t require stepping on others?

was your mind ever laid to rest
does your body ever

On my hands and knees again, I thought of chalk, the tool. The previous versions of me who used this simple mineral to outline their present in rock caves. The outlines of bodies lost to tragedy on cement sideways. Anytime you create you leave a piece of yourself behind. All your residue is left in material form.

Until this point, I had freely floated from room to room leaving my words behind me. The stillness found in the last room was manifested by a closed white door. This would be my final portal into Hrušková’s sound installation, The waning yolk. I entered a bare room with two speakers and two black metal stools. One of each stood on the edge of a walkway. 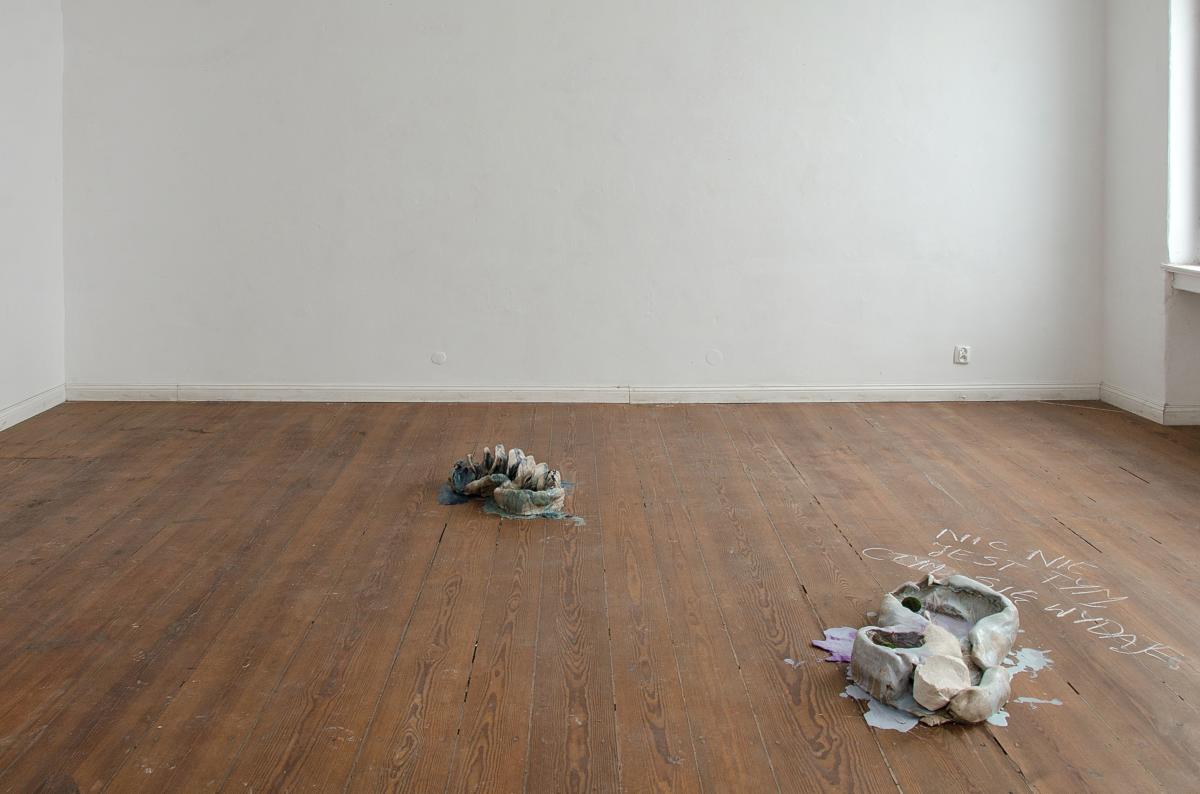 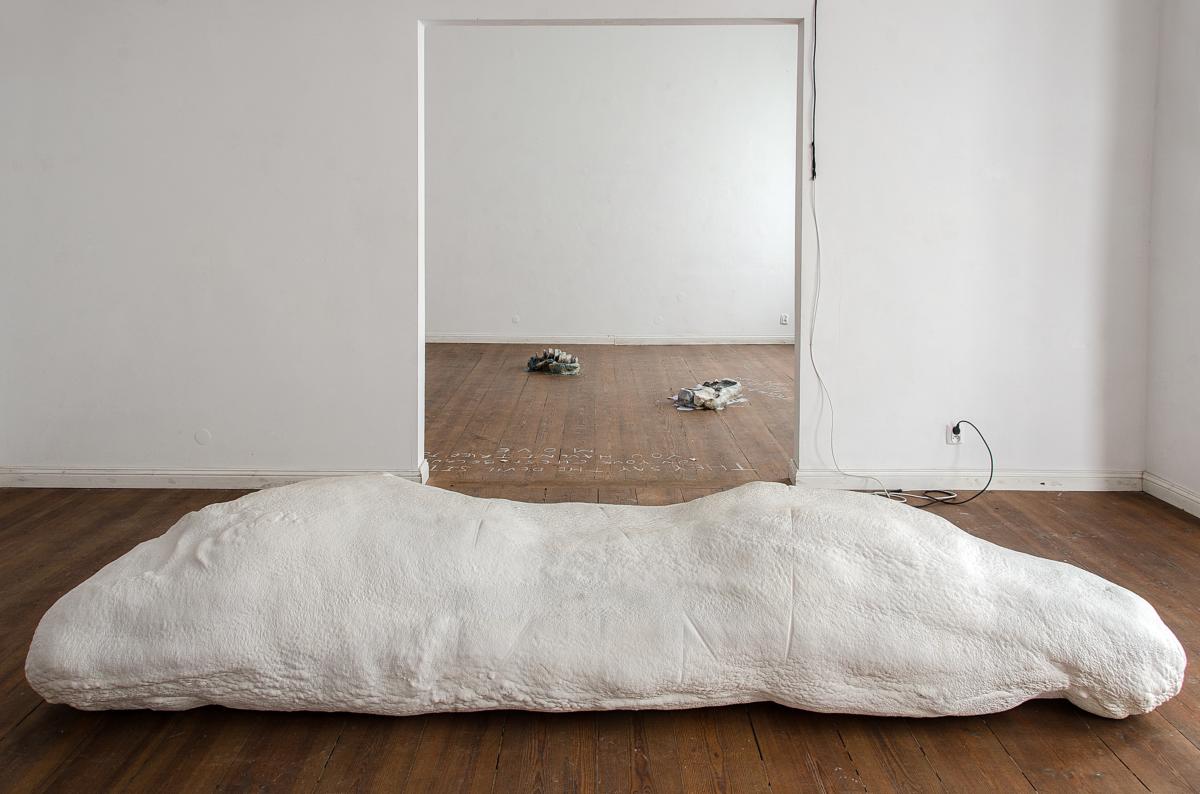 “An uttered word cut through a breath, solidified and plunged into the sea. It sank into the depth to meet a mouth that slurped it up and a throat that had to swallow it.”

Hrušková’s slow, breathy delivery submerged me. With nothing but blank walls and empty space, I unanchored myself from the room. My mind orchestrated her words as my legs and feet migrated without borders. The waning yolk is a collection of short accounts or creative case studies, that each relates to different topography. Each recording reads like Hrušková’s personal observations. Like making a detailed sketch of an ocean-view on paper, each vignette within The waning yolk is a word sketch painted in the hues Hrušková’s experiences. She directly engages with the material world by reanimating it using evocative language. Sound proved to be the perfect medium to enact her thoughts. The words each undulated on top of air, maneuvering around all things rooted, including me. Like a necromancer, her words reform the object that she speaks into existence. The words are able to cut the daily mental noise: the questioning of belonging to something greater than you are.

Walking around with no trace, I pondered on the lack of permanence for both humans and materials. People become phantoms, and eventually, evaporate when no one can utter their names. Objects become obsolete in human confines but escape the need to establish a legacy. Although the works in Porous Whispers were created separately by two individuals, they materialized into one singular breathe. I left the flat on a cold January day to exhale, and see what new forms now resided inside of me.