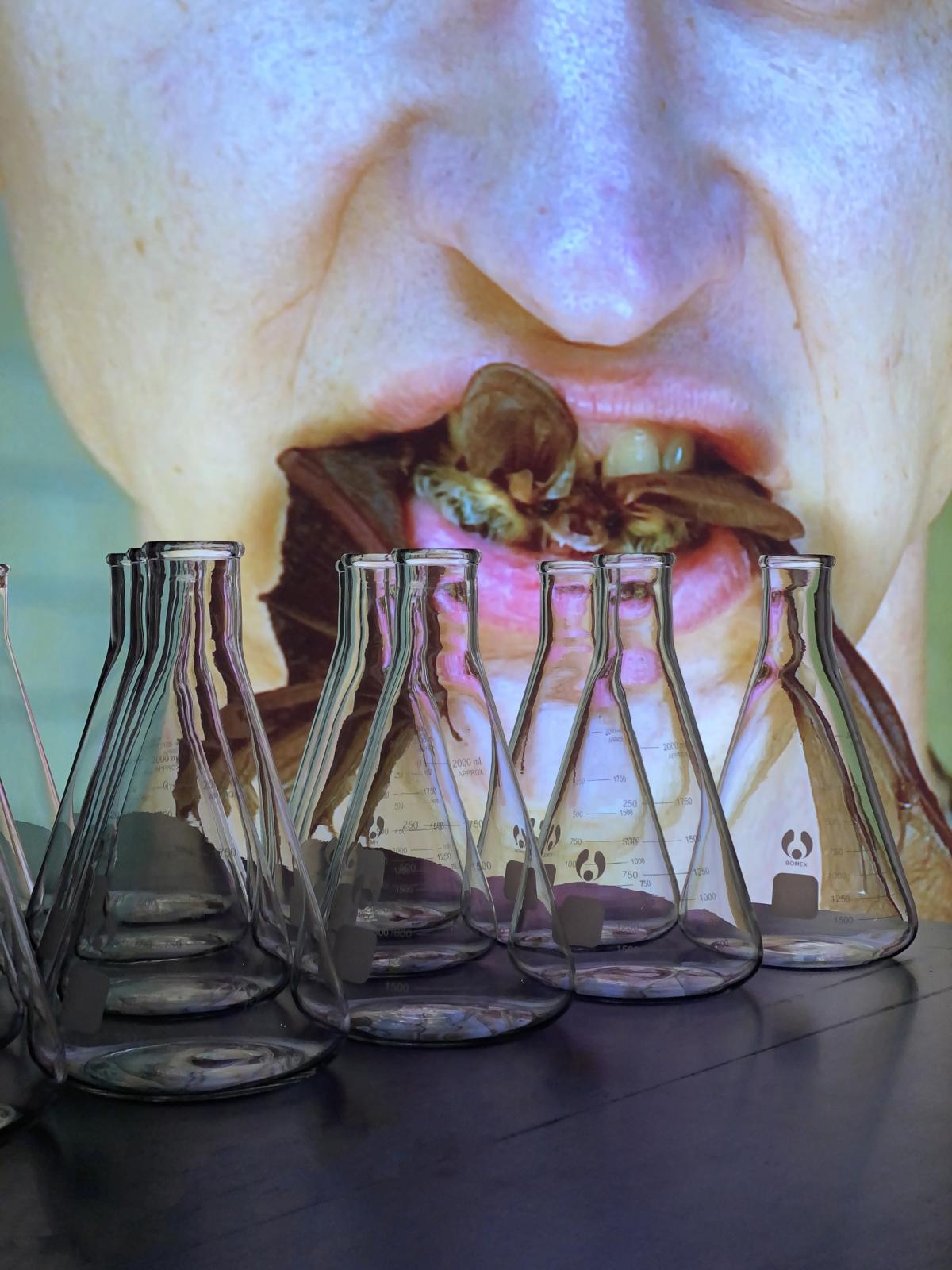 The onset of the coronavirus has engendered numerous responses from artists all over the world, some strange, some odd, others radical. When the virus that gripped the world in December became a full blown global pandemic this year, many artists wondered how or even whether to respond at all. One artist, Petr Davydtchenko, responded by eating a live bat in a video that went viral this past June, a video that has since been censored from the artist’s YouTube channel.

According to the artist’s press statement, the video was made to protest medical patents by companies like Gilead and Pfizer, large pharmaceutical companies who “‘refused to take part in a World Health Organisation (WHO) proposal that would ensure that any medicine would be patent-free and fairly distributed to those in need.” Not long after the artist’s bat-eating viral went down, an exhibition of Davydtchenko’s works opened at the Palazzo Lucarini Contemporary arts center in Trevi, Italy. Entitled Perftoran (5 July – 30 August) curated by Maurizio Coccia, the exhibition builds on Davydtchenko’s long standing interest in performative responses to food consumption and the abuses of progress, only here extended to the affects power of pharmaceutical multinationals.

The exhibition includes the censored bat video, truisms and wall texts relating to Big Pharma’s monopolistic grip on medicine and human health, documentary videos, an assembled alchemist lab featuring propolis and apicultural materials, and an installation of 13 hazmat suits designed by FOUNDRY UNIFORM specifically for this project. The title of the exhibition –Perftoran– draws on the tragic story surrounding a Soviet scientist who developed a blood emulsion formula, it’s brilliant phosphorescent colour earning it the nickname ‘blue blood.’ After its inventor Professor Beloyartsev won a major state-sanctioned prize from the USSR in 1985, he was placed under investigation by Soviet authorities who accused the scientist of illegally procuring money and equipment for research and development, resulting in his detainment and eventual death by a mysterious suicide. As a result of the scientist’s strange death, clinical trials of perftoran stopped, although by then the point was made that perftoran could revolutionize some areas of medicine. The result was nonetheless a sign that powerful forces can and often do impede human access to important and potentially life saving medical developments. Today, medicine and life saving treatments continue to be co-opted by financial power structures that dominate the patent industry, where monopolies on patents for life saving drugs and treatments proliferate that create barriers to widespread access to health care and affordable medicine.

One does not have to dive too far into recent history for examples. Take the 2018 case of the venture capitalist Martin Shkreli, who after obtaining the manufacturing license for the antiparasitic drug Daraprim, immediately its price by a factor of 56 (from US$13.5 to $750 per pill), leading for him to be considered at one point the most hated man in America. At the same time, bodies like the Centres of Disease Control and Prevention (CDC) have also seen their budgets cut considerably in recent years, while private pharma continues to lobby for protectionist policies in world markets to protect their monopoly on human health.

Drawing on this unfortunate downside of medicine, Davydtchenko’s exhibition connects the dots that go from the stigma and disconnect between mass industrial meat farming and the consumption of live animals, all the way to how transnational corporations like Gilead, developer of the drug remdesivir, one of only two medicines with a proven effect against the coronavirus. In one of the documentary videos displayed in the gallery, Davydtchenko shows how these factors create a perfect storm of private sector profiteering, negligent production practices, environmental destruction and access to medicine that blocks access to medicine for poorer countries, where essential drugs are the intellectual property of private companies, who in turn charge exorbitant prices and resist attempts to produce cheaper derivatives domestically, thereby allowing pandemics like the coronavirus to take place. “The exhibition is a gesture of desperation,” Davydtchenko told me at the opening. “The shock value of consuming a live bat was intended to create awareness that people are dying and it is the government’s inability to act that is actually putting millions of lives at risk, while at the same time large pharmaceutical companies like Gilead, Pfizer and Roche are doing everything they can to profit from the deadly disease.”

Moving through the exhibition, the industrial trappings of medicine are laid bare, but so too the shortcomings of the for-profit industrial health machine ability to protect public health. If the brutal extremity of consuming a live bat for the sake of art can teach us anything, it is perhaps that it is easier to vilify an artist who uses his own body to brush up against the machine of capitalism, than it is to vilify the machinery of capitalism itself. The irony seems to be that while Davydtchenko uses the language and long history of performance to question the stranglehold of industrial pharmaceutical R&D funding to create a vaccine, the status-quo continues unabated. Private pharma continues to use its oligarchic power to hamper the development and manufacture of new drugs by anyone else, including the state.

So while the machinations of industrial society continue to churn out massive profits for big pharma, the exhibition narrows in on the aspects of pandemics and their profiteering that underlie the madness of a senile system, the batshit craziness of a broken system that perhaps ought to be eaten alive as well.