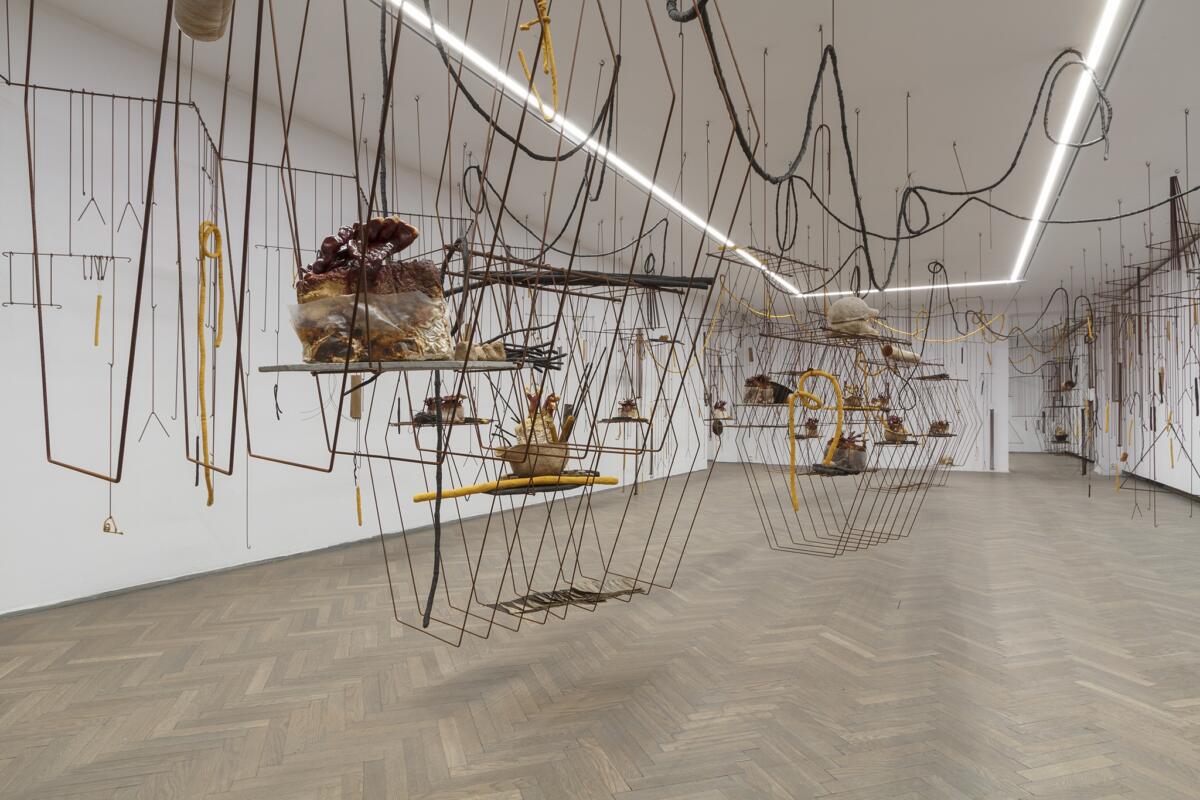 Evolution is no linear family tree, but change
in the single multidimensional being that has
grown to cover the entire surface of Earth.[1]

Making the world is not exclusive to humans. The Means, The Milieu is a concrete example of this, an artwork that goes beyond metaphors and representational modes and instead enacts an elaborate parasitic mushroom takeover. Within the apparent randomness of the elements, junctions emerge. They highlight interconnectedness, constant feedback loops, repetitions and patterns of self-organisation. They create an alternative logic, a wild and disobedient position while revealing the hidden structure of chaos underlining our world with complex and entangled connections. This sprawling artwork colonises the gallery and interrupts its neat narratives. In doing so, it complicates our understanding of space, time and even how the self might be understood.

The Means, The Milieu creates its own microclimate and patterns, which were slightly different at each site the work has been installed. Consisting of thousands of variable units it can be continuously rearranged and reconfigured to adapt to different exhibition contexts as each time it spawns radically new formats. Since its first iteration in the basement of Objectif Exhibitions in Antwerp in 2014, with each exhibition the installation offers something new. The underlying structures that create its main space are provided by the forest of hexagons made of manually bent and oxidised metal rods. The hanging modular scaffolding – not unlike DNA – encodes the ability of the structure to multiply and expand. This large sculptural installation creates a network of several layers. It is a mycorrhizal network where mycelium interacts with the root system of a forest; it is a three-dimensional manifestation of a web of communication with links branching out in cyberspace; and the connections of neural pathways from within our bodies. It is all of these things and more. Each constituent piece is handmade. The labour, the consideration, touch and handling generates a living form. The caoutchouc-infused hemp ropes, ochre, plaster, mushrooms and other elements offer varying manifestations of certain characters in the artwork. This sensibility reminds me of quorum sensing, a phenomenon typical of bacteria, but also characteristic of fungal cells. Quorum sensing is nature’s ability to feel the presence and density of other cells, to repress or express specific genes as beneficial, as well as to coordinate form and behaviour en masse. For example, bacteria express energetically expensive processes as a collective. Or in the presence of other fungal cells, they coordinate behaviour to form a mushroom in unison. 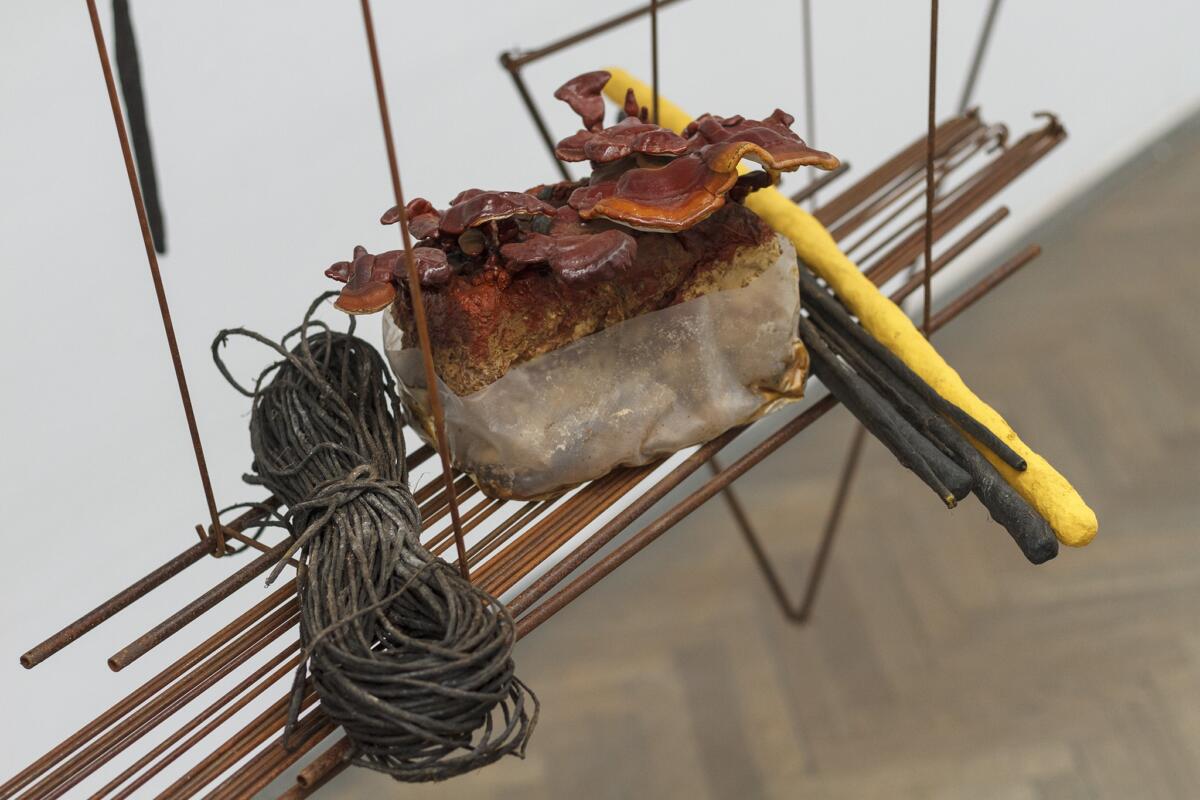 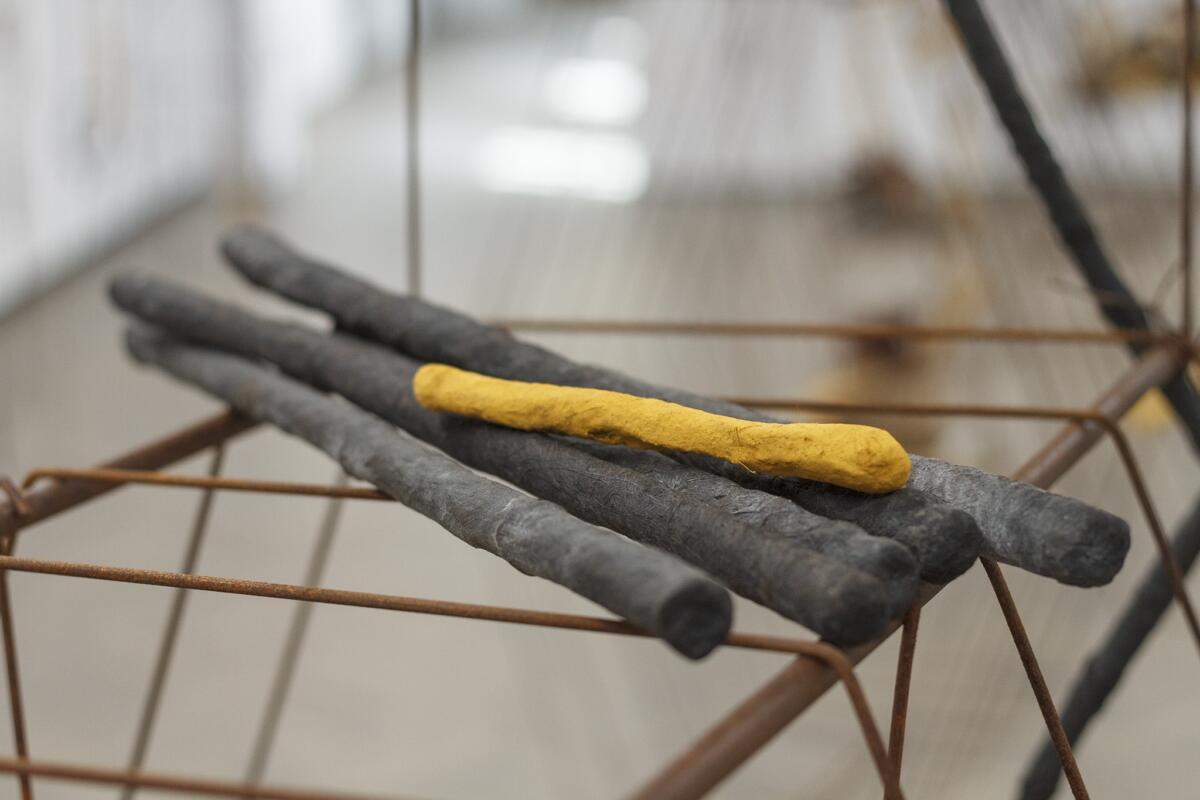 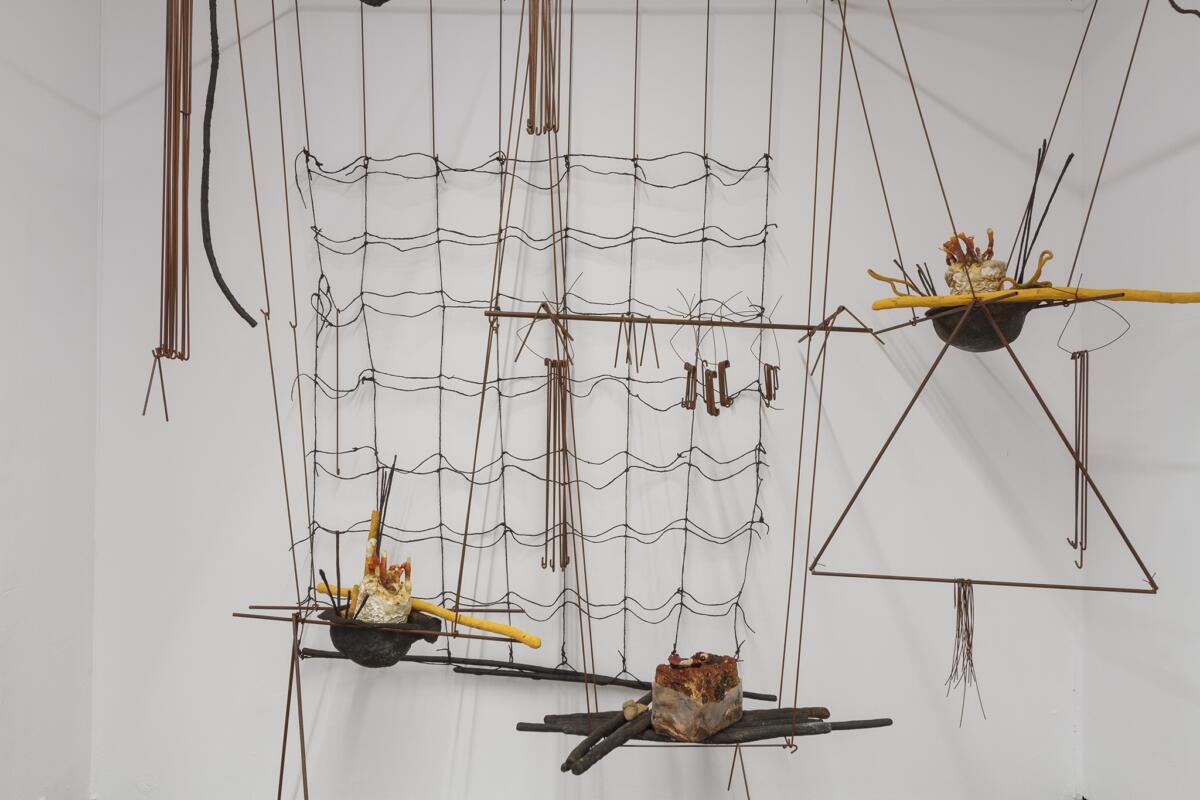 The questions of individuals

Species boundaries are a slippery concept. DNA sequencing in mushrooms only undermines the confidence in the species as the basic category for understanding kinds.[2] The lingzhi (Ganoderma lucidum or reishi) mushrooms that Tarasewicz employs in her work are known as the ‘flower of longevity’ or ‘herb of immortality’ in Chinese medicine. These names feel especially well-articulated as the mushrooms in question are not only agents of entropy – for example, breaking down trees – but they help form soil, the birthplace of much new life. They can be found in most places on Earth, however, as lingzhi are able to cross with other related mushrooms, including some not yet described by science, we cannot always surely separate the species from others. This ultimate unknowability profoundly suits Tarasewicz’s complex and growing installation.

Sometimes one encounters a boundary along which two elements are spreading apart, with momentous consequences. It was said you may well discover seams and sutures in yourself. While the cap is originally from the same as the stem, as the stem rises it starts to swell, growing further rings as materials on the side are pulled away from each other. It rises up in the middle and divides to multiple parts and opposite flanks. The force which causes mushrooms to push up and out: this is gravity’s doing and undoing. Sensing all other mushroom cells, the dampness, the wind, the temperature and other lifeforms causes them to push through the rest of the material – stretching, cracking, splitting open and folding out. As they mature and lose some of the initial impetus the waxy surface hardens and solidifies. They change colours with age from beige to orange and ochre and eventually deep reds and browns while the spores underneath are readying to be released and set sail.

Just like Tarasewicz’s The Means, The Milieu, mushrooms and their spores contain a large variability of genetic materials within. Fungi spores spread all over the world (and can even be found in outer space), or stay close to home. To add to the possibilities, they sometimes have rather queer reproductive techniques, such as the haploid spores joining with mushroom body cells that already have chromosomal pairs, to create genetically different offsprings.[3] Some fungi have tens and thousands of mating types (which we would call sexes in human terms), while the mycelium of many fungi can also fuse with other mycelial networks if they are genetically similar enough, even if they are not sexually compatible. While fungal self-identity is important and the hyphae tips can recognise their own body and cells, the self can also shade off into otherness gradually.[4] 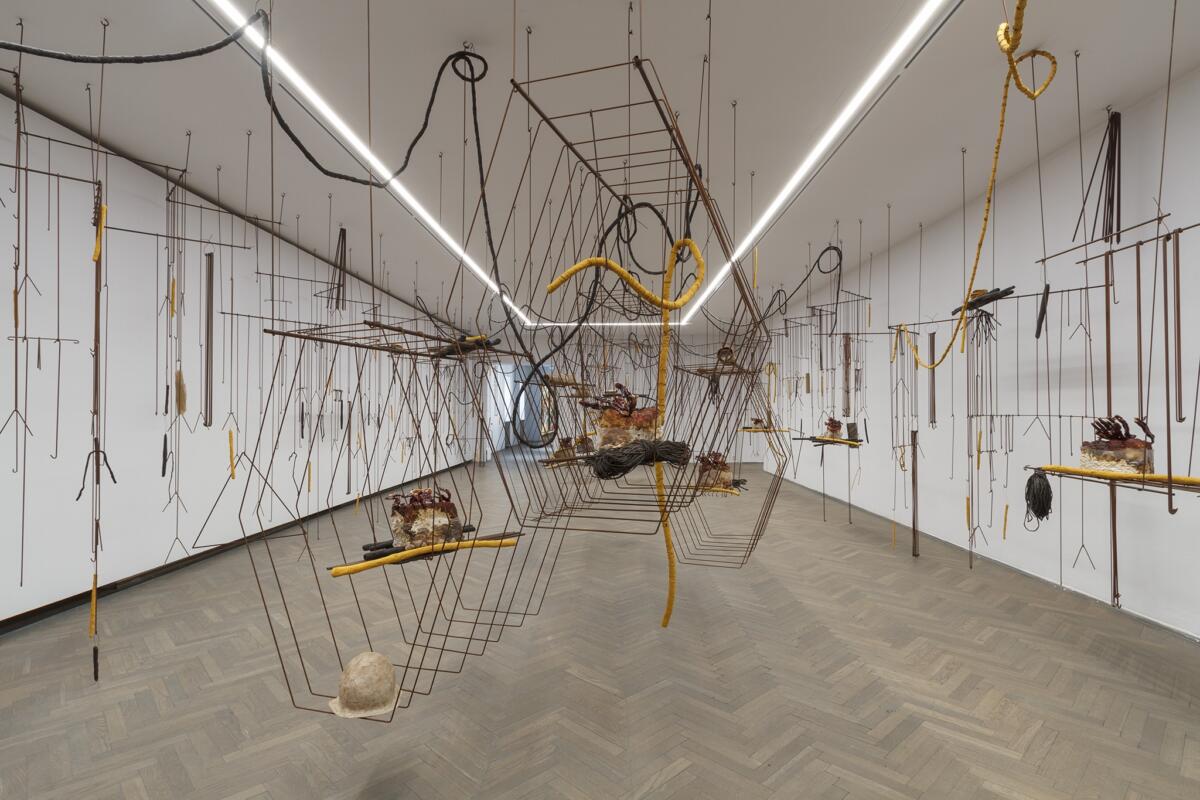 We are inseparable from our companion species, and dependent on them for our survival. It is an illusion that we can detach ourselves, and keep only within the borders of our bodies, or retreat within the walls of our homes. Instead, what we can do, is to redefine ourselves with adaptable and soft boundaries. We can start to understand our evolution as a story of an ongoing cross-contamination. Humans are a result of symbiosis, adaptations to circumstances, living with and being hosts to others. The human body (as well as the space of the gallery) is a site of nature in the past, present and future. As social beings, economic and ecological factors, we are inseparable from the world around us, and as such, our fate is bound to other living creatures.

The politics of adaptation

How do fungi maintain a sense of self and body while remaining capable of constantly revising their shape and form?

Do you remember the familiar feeling you get in your cells while watching honey drop from the spoon? As more and more liquid flows into the drop, it becomes thicker and thicker. Then it slowly starts to stretch out, while simultaneously becoming narrower in one part. At some point, the drop develops a waist which eventually breaks off. The drop separates and each part becomes rounded again. Imagine this process not driven by gravity but by a sense of curiosity: the one cell wide hyphae grow and divide in new directions wanting to explore.

Evolutionary theorist and biologist Lynn Margulis defined life by its ability to continuously grow, rearrange and transform itself while creating its own scaffolding.[5] In this sense Tarasewicz’s work is alive. Mushrooms are constantly adapting to their environment through growing various shapes and forms both under and above ground. A small shift transforms one system or one order into another.[6] They break down, and die in one part, while progressively developing to mend the internal damage through new remodelled and dense architectures in another direction. Fungi can discard less competitive genomes and pick up others. They can also merge with others and become part of a new communal body. Connections between fungal hyphae and plant roots are dynamically formed and reformed as mushrooms actively encourage certain plants while hindering others. Fungal structures are dependent on moisture, temperature, the quality of soil and companion species. Some can only live on very mature trees and in undisturbed forests, while others prefer recently cut vegetation and disturbed soils, hence responding to human disturbances. As the ongoing colonial and capitalist territorial expansions have colonised life, mushrooms and forests, like all of us, have become equally dependent on political agendas, funding cycles and business interests. 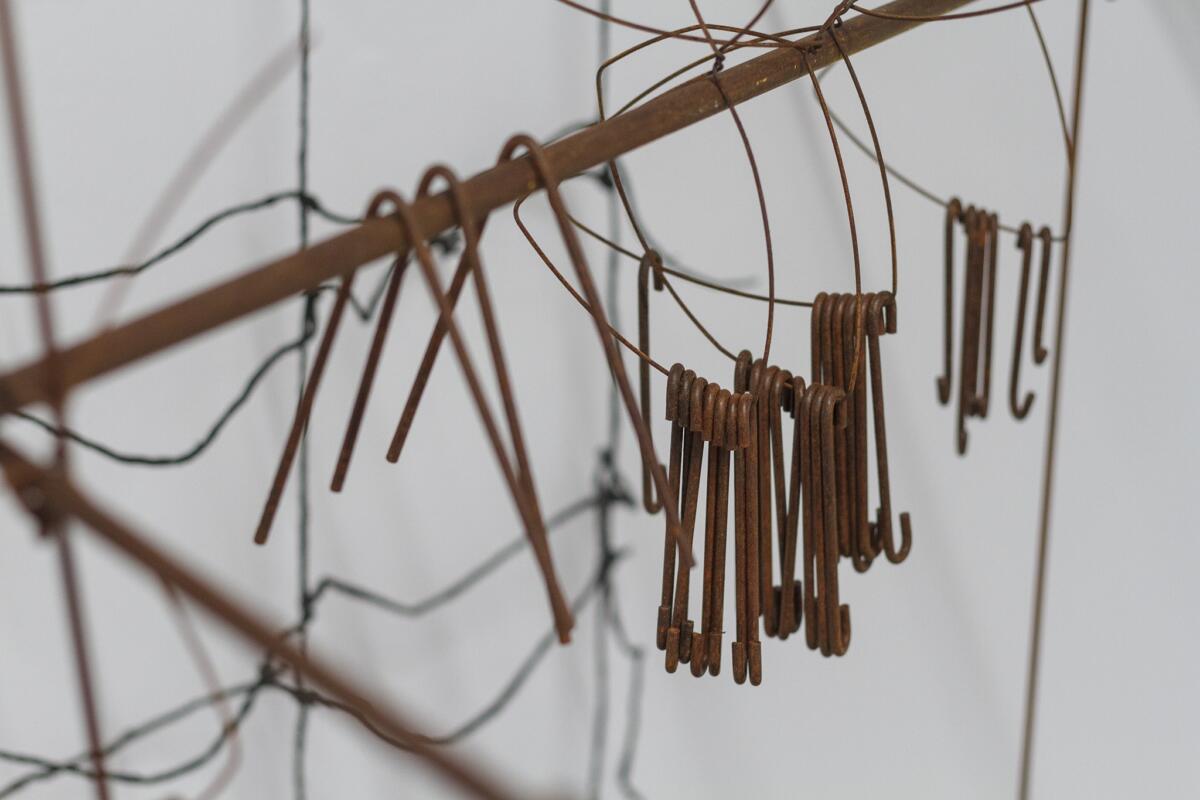 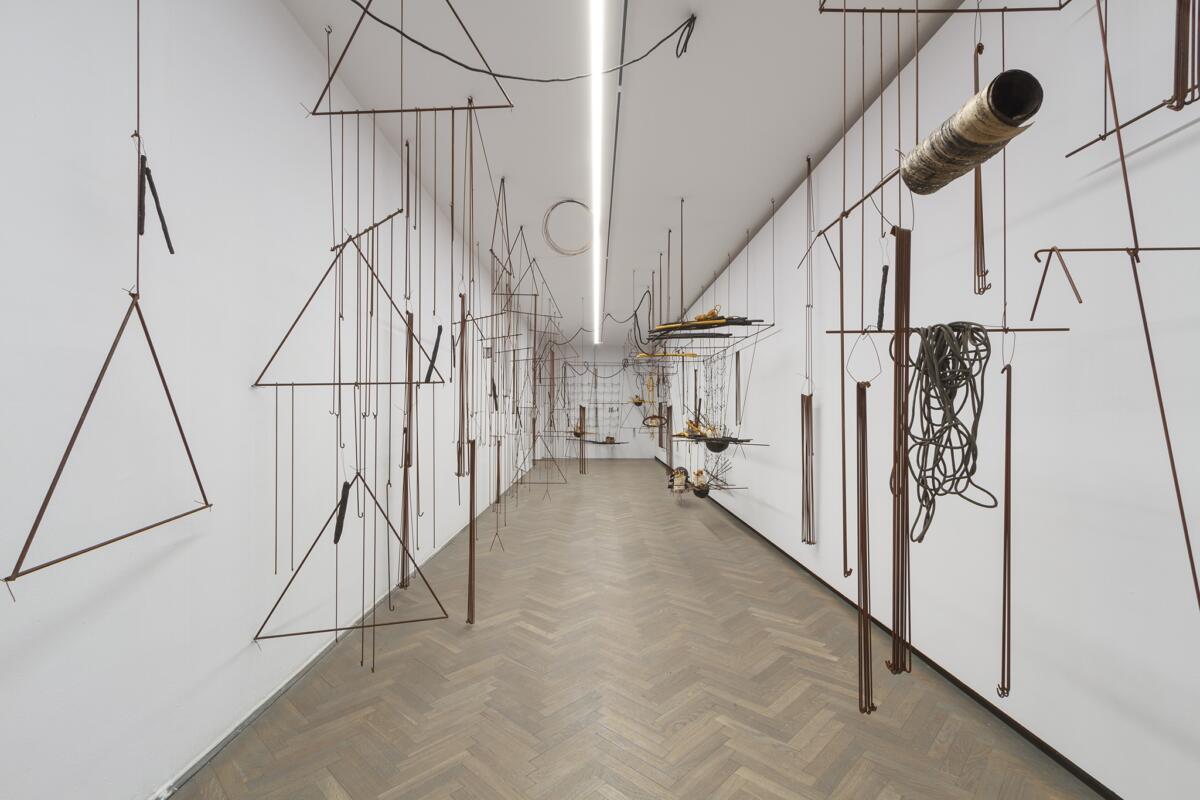 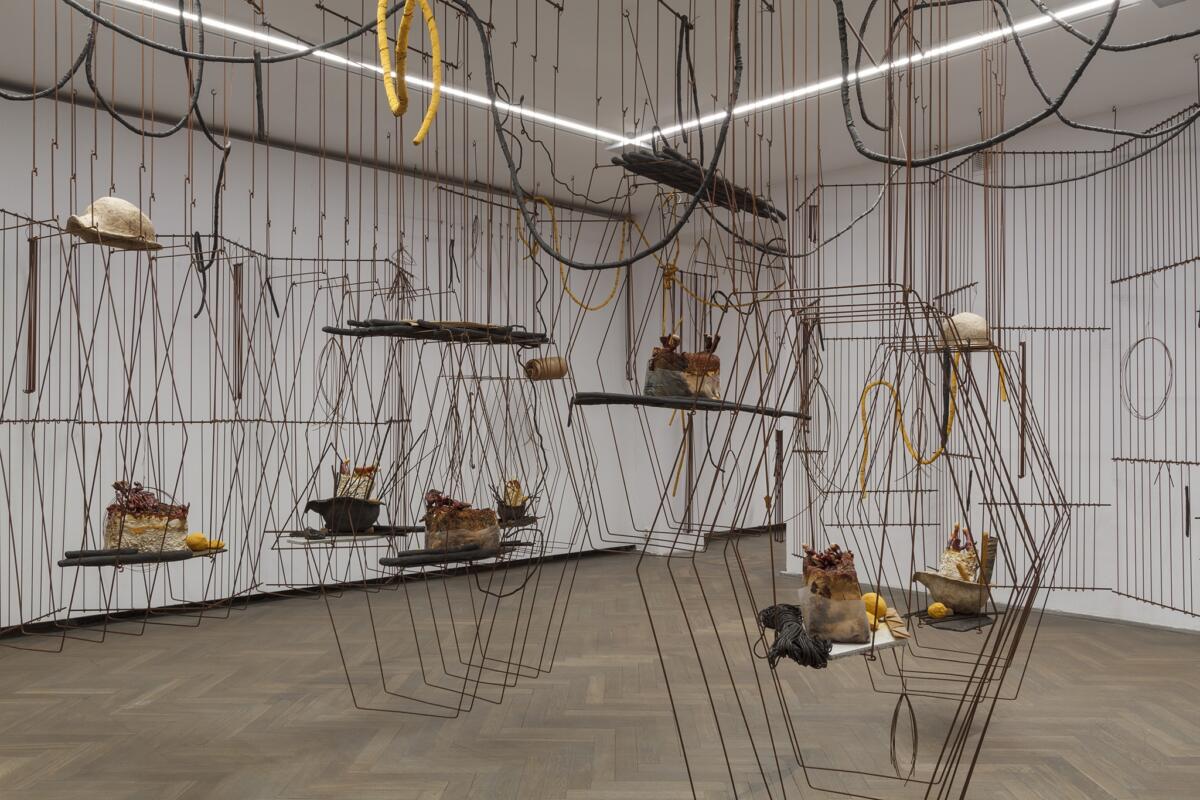 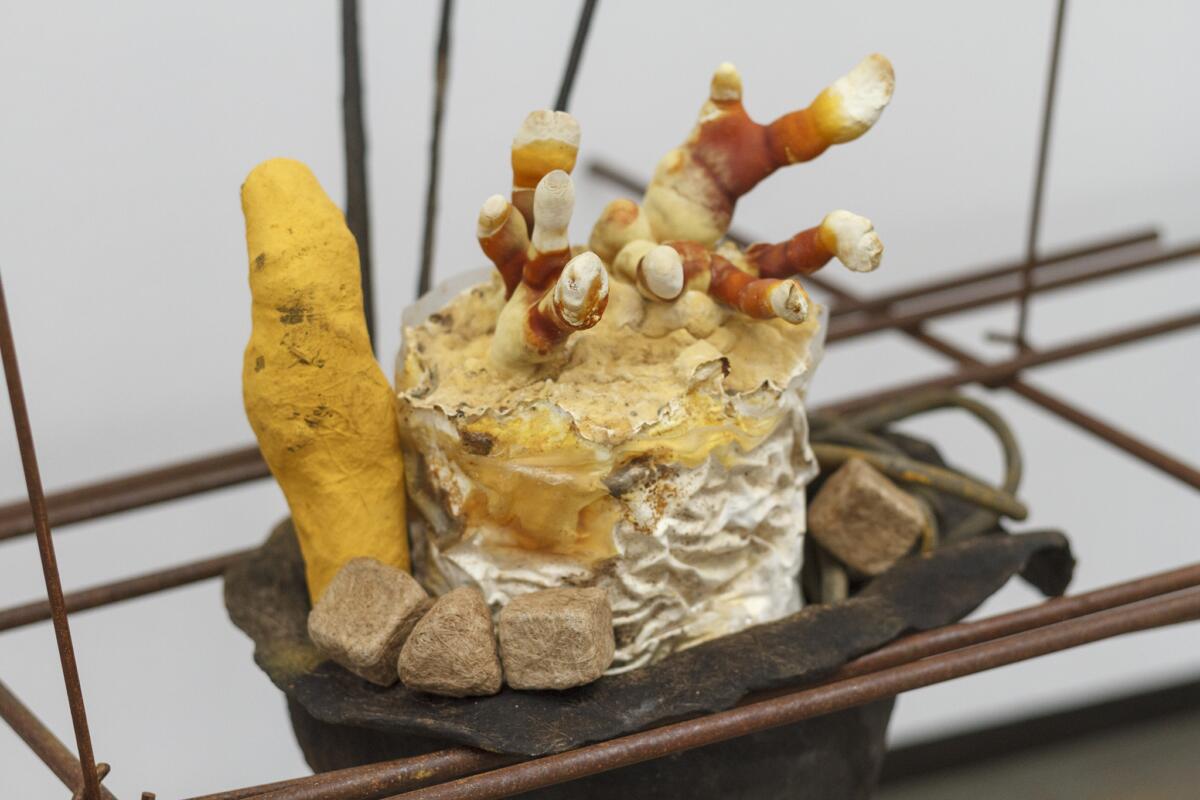 Excess is in the logic of the mushrooms. As described above, there is much potential in the almost infinite opportunities encoded in spores, mating types and growth patterns. This richness is something that Iza Tarasewicz’s piece inhabits. How can we embrace the prospects of mushroom encounters to trouble existing definitions of the self? What kind of productive pat-terns and properties can arise from this plethora of possibilities? This abundance fills me with hope. I feel that places where a multitude of possibilities can be tested and enacted create the chance for alternative forms and perhaps even alternative political imaginaries to emerge.

The text accompanied the exhibition The Means, The Milieu by Iza Tarasewicz, curated by Monika Szewczyk at Arsenal Gallery in Białystok, 19 February – 28 March 2021.

[2] Anna Tsing, The Mushroom at the End of the World: On the Possibility of Life in Capitalist Ruins, Princeton University Press, Princeton 2015, pp. 227–239.