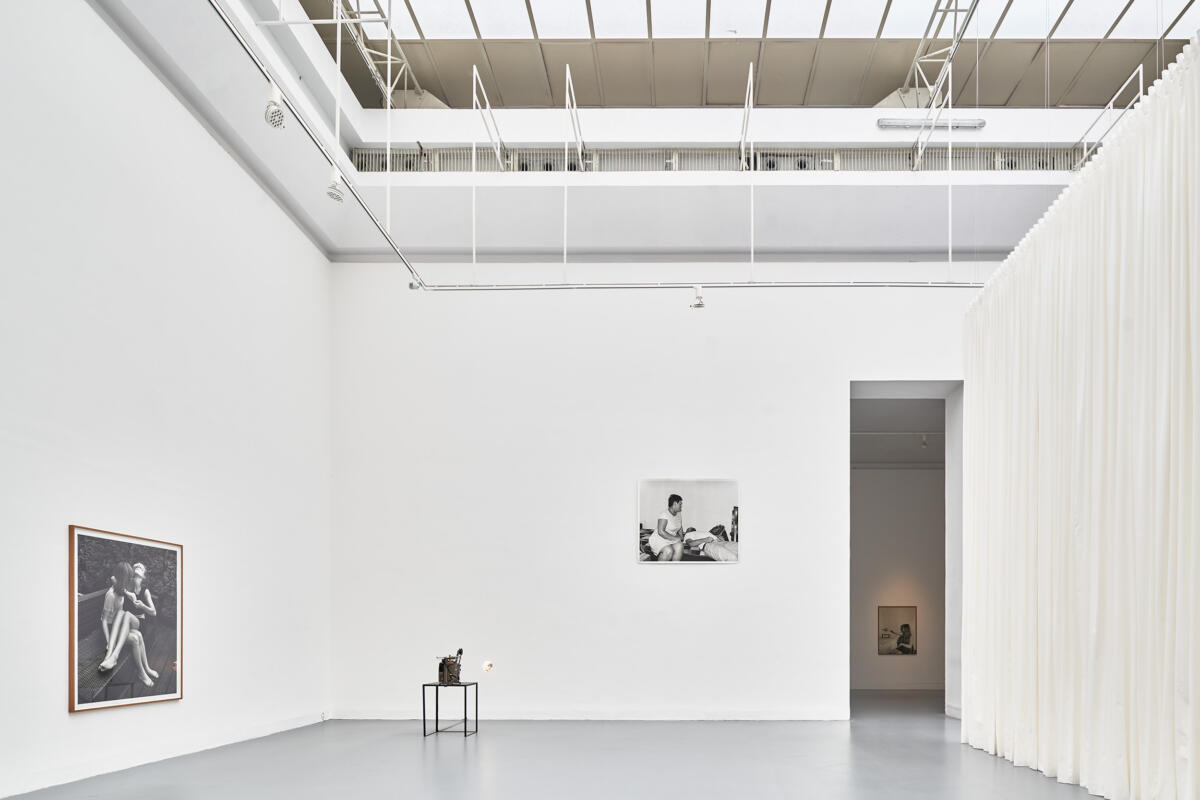 Adam Mazur: When did you begin taking photographs?

Joanna Piotrowska: During high school in Kraków, two of my friends, Aga and Jola, attended a photography workshop, and that was probably my first contact with photography. Later on, my interest in taking pictures was supported by Agata Pankiewicz, who ran the Photography Department at the Academy of Fine Arts in Kraków, and by Prot Jarnuszkiewicz, who taught me at the Warsaw Film School. My first exhibition, 5128, was held at the ZPAF Gallery in Kraków, thanks to the encouragement of Karol Hordziej and Piotr Lelek. At that time, Piotr also allowed me to borrow his camera so that I could carry out the project in large format. It was an extremely kind gesture on his part, and I remain grateful to him for his generosity.

I think it was a combination of the very early support I received, which I mentioned, and the fact that the first coherent project I made was with photography. Since I studied at the Royal College of Art in London, my interest in photography was no greater than my interest in film or painting. The most interesting thing for me now is how photography works in the context of film, performance, and the objects that I use.

What role then did your studies in London play?

After the Academy of Fine Arts in Kraków, it was like landing on another planet. In the space of one year we had meetings with Sissel Tolaas, Michael Elmgreen and Ingar Dragset (Elmgreen & Dragset), Laure Prouvost, Cerith Wyn Evans, Tomás Saraceno, and Willie Doherty. That was a time when the student groups at RCA were relatively small. Mine had eighteen people. We often had seminars with the guest lecturers. For example, in my sophomore year, I did a tutorial with Joan Jonas. Our lecturers were also extremely interesting people with their own artistic practices. Some of the conversations I had with them I still remember, in particular those with Olivier Richon and Sarah Jones. In my group, in which we were all quite close, half of the eighteen were from outside England: Israel, Ireland, Finland, Germany, Dagestan, Denmark, Japan, South Korea, Spain. We spent two intense years together. It was also important our living in London, the daily contact with people from different cultures. This escape from claustrophobic, homogeneous, all-Catholic Polish society was an incredible relief for me. At last, there were people around me who had different ways of being and thinking. 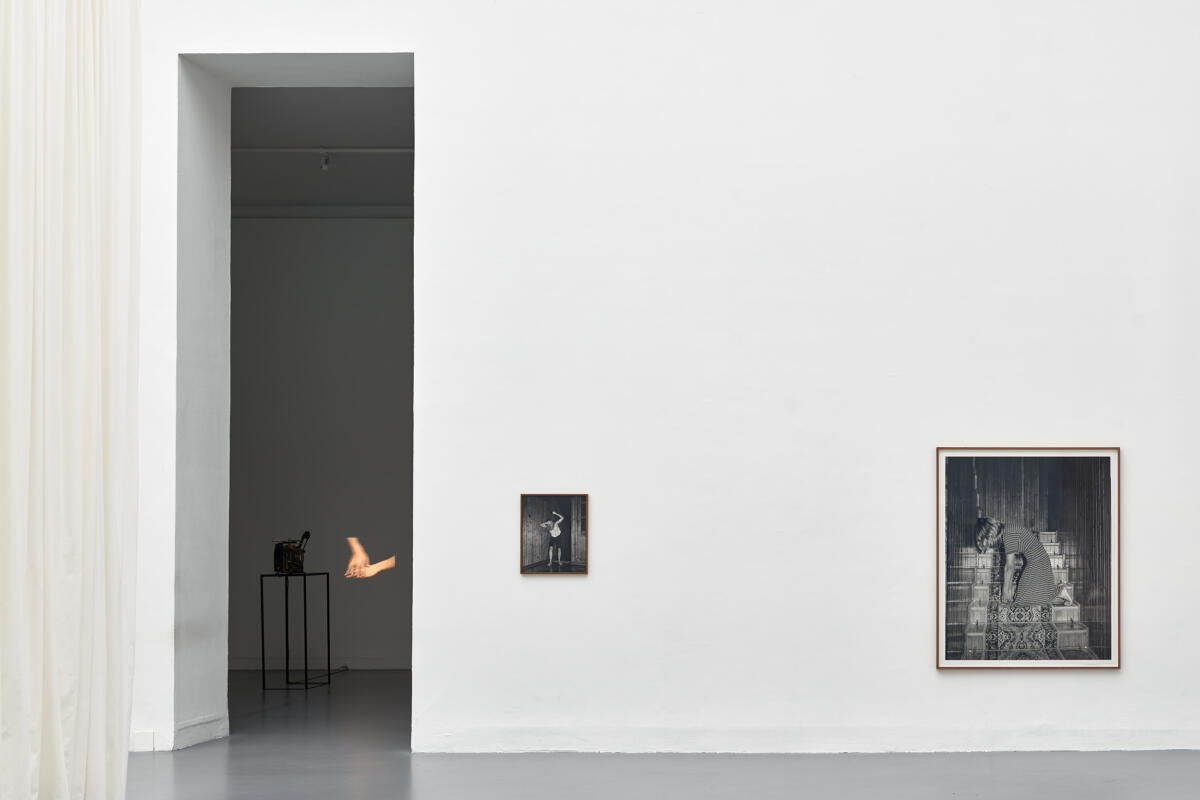 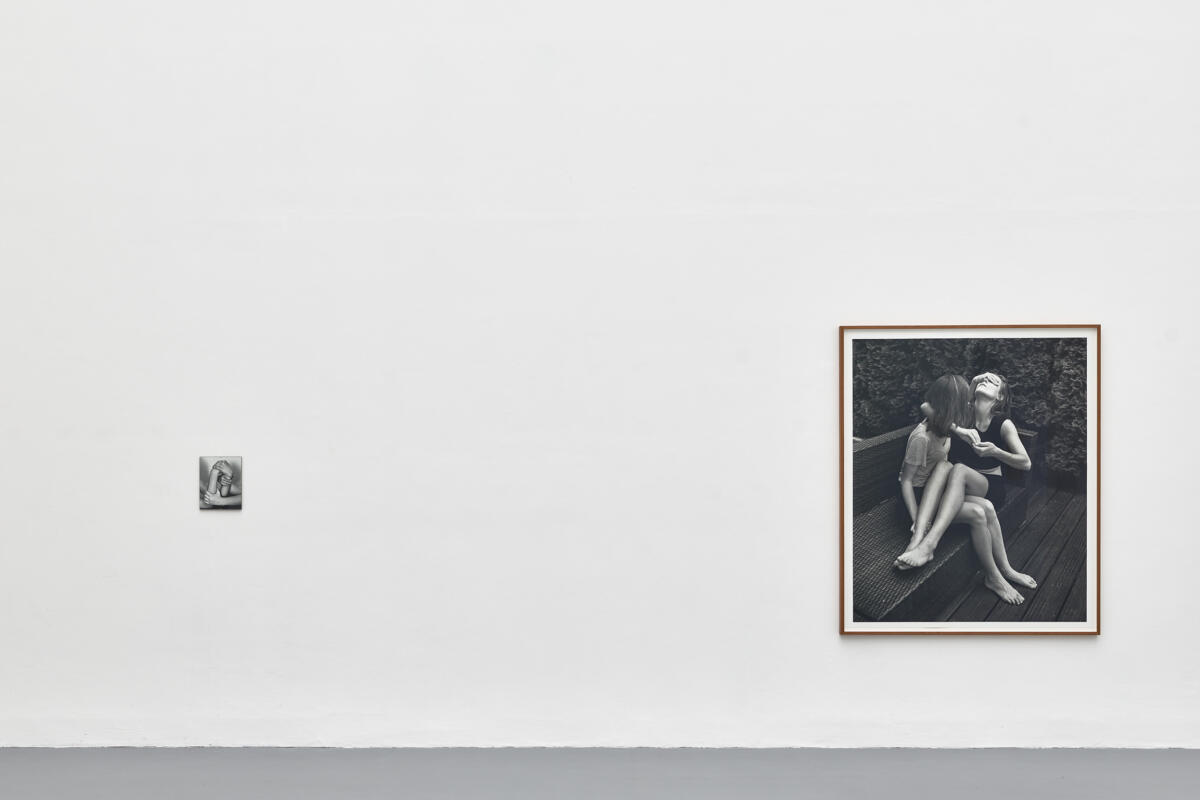 How do you select the photo format for exhibiting in a gallery?

For me, making an exhibition is like editing a film: the selection of images, their size, their repeatability or not. It is different for every exhibition. There’s also the viewer’s body being inside the space. An interior has a huge impact on the reception of works, and the hanging and placement of objects should always be a central factor. As with film, photography affords one a lot of flexibility with its presentation. You can show one very large print in a large space and it will have a different meaning and effect than if you place it in a small room. You can show two or even three identical prints in the same space. That is something I do quite often, because I like to return to the same images, which reminds me of recurring dreams. All of my photographic works are shown in various sizes, from very small formats to formats so large it’s impossible to make prints by hand.

This was the case at the Kunsthalle Basel exhibition.

Yes, last year in Basel, I showed a handmade 160×200-cm print made on two pieces of photographic paper in a darkroom built especially for this purpose. The print was presented in a very small room, in which the relation of the visitor’s body to the work was completely different than in a large space. It was hard to see the whole picture without being able to step back, so the picture was absorbed in fragments. In the photograph, there is a girl lying in a crib. Her body is monumental and powerful due to the size of the print, and the crib is more like a cage. The visitor is overwhelmed not only by the impossibility of grasping the subject of the photo, but also by the domination of the represented figure.

So size does matter?

You emphasise the manual printing of photographs. Is darkroom work important to you?

Paradoxically, the use of the gelatin silver technique makes me think less about the mediation of the image of reality by technology. This type of print refers to the past, to a photography of yore which is a record of historical events. The past and playing with documentary conventions are important aspects of my practice. 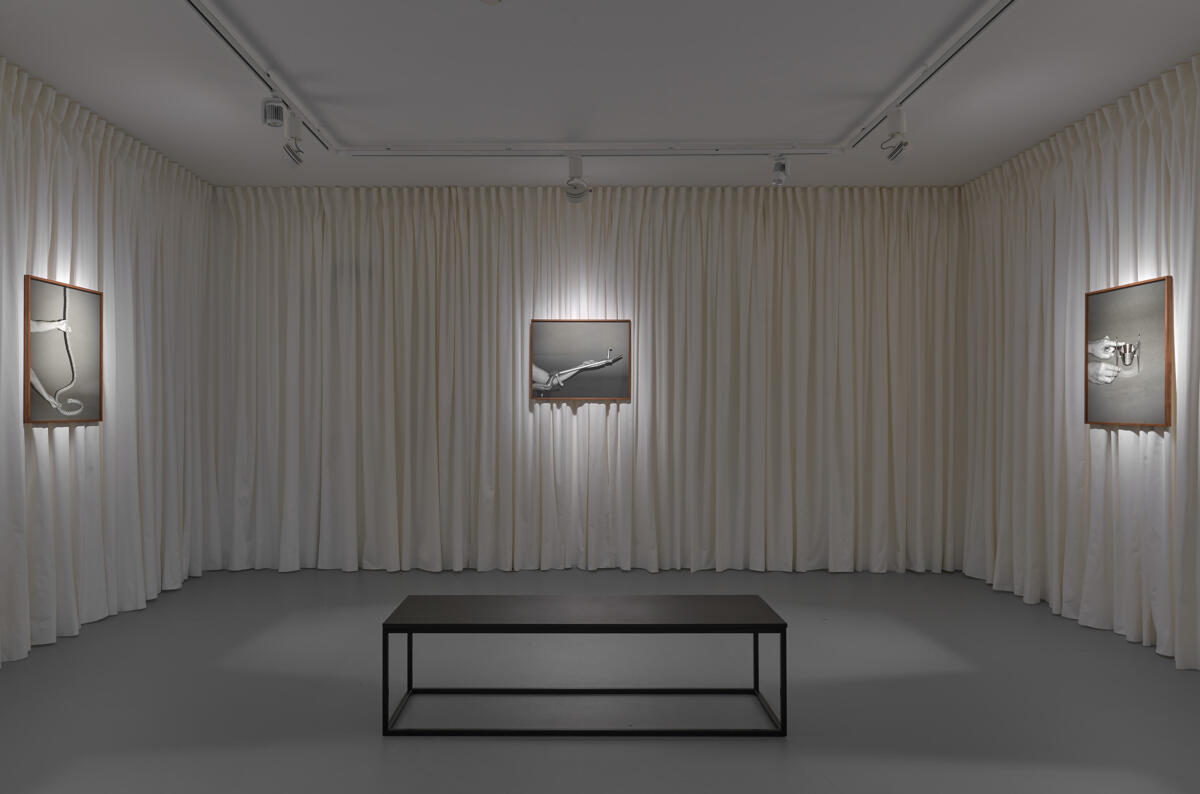 Can one photograph emotions?

I am not sure if one can. Trying to photograph emotions sounds daunting, for many reasons. However, you can definitely transfer your emotions in the process of creating film, music, architecture, or art of any medium, including photography. Even if it doesn’t happen at a one-to-one scale, because the creative process is complex and emotional life is also complex, it is probably impossible to be in the process of creating without transferring some emotions into what you do.

Do you mean your emotions?

I have never considered purposefully transferring my emotions to my works or, God forbid, showing the ‘real emotions’ of the people who are in front of my lens. On the contrary, I am more interested in artificiality than in naturalness, and in staged scenarios than in existing situations.

If not emotions, then psychology?

I think that in some indirect way my interests relate to the issues of psychology, sociology, and philosophy.

Black and white are dominant in your photography, but you also have series that are in colour. When do you decide to use colour?

To begin with, it is often an intuitive decision. The black-and-white image is simple and austere. It is easier to handle than colour. Almost all of my photographic works show body movements or gestures that are more expressive in a reduced context.

What does the relationship between photography and film look like in your work?

What is important to me in combining photography and film is the combination of the basic features of each of these media: stillness and movement, and silence and sound. The film work explores different aspects of previously photographed motifs. For example, Animal Enrichment relies entirely on the sound of the ball, which is surprisingly aggressive. In Little Sunshine, the quick laugh of a child in the background in the final scene of the film contrasts with the seriousness of the filmed adult play. On the other hand, the frozen image of a photograph renders its motif more abstractly removed from the here and now, which gives it a more universal meaning. 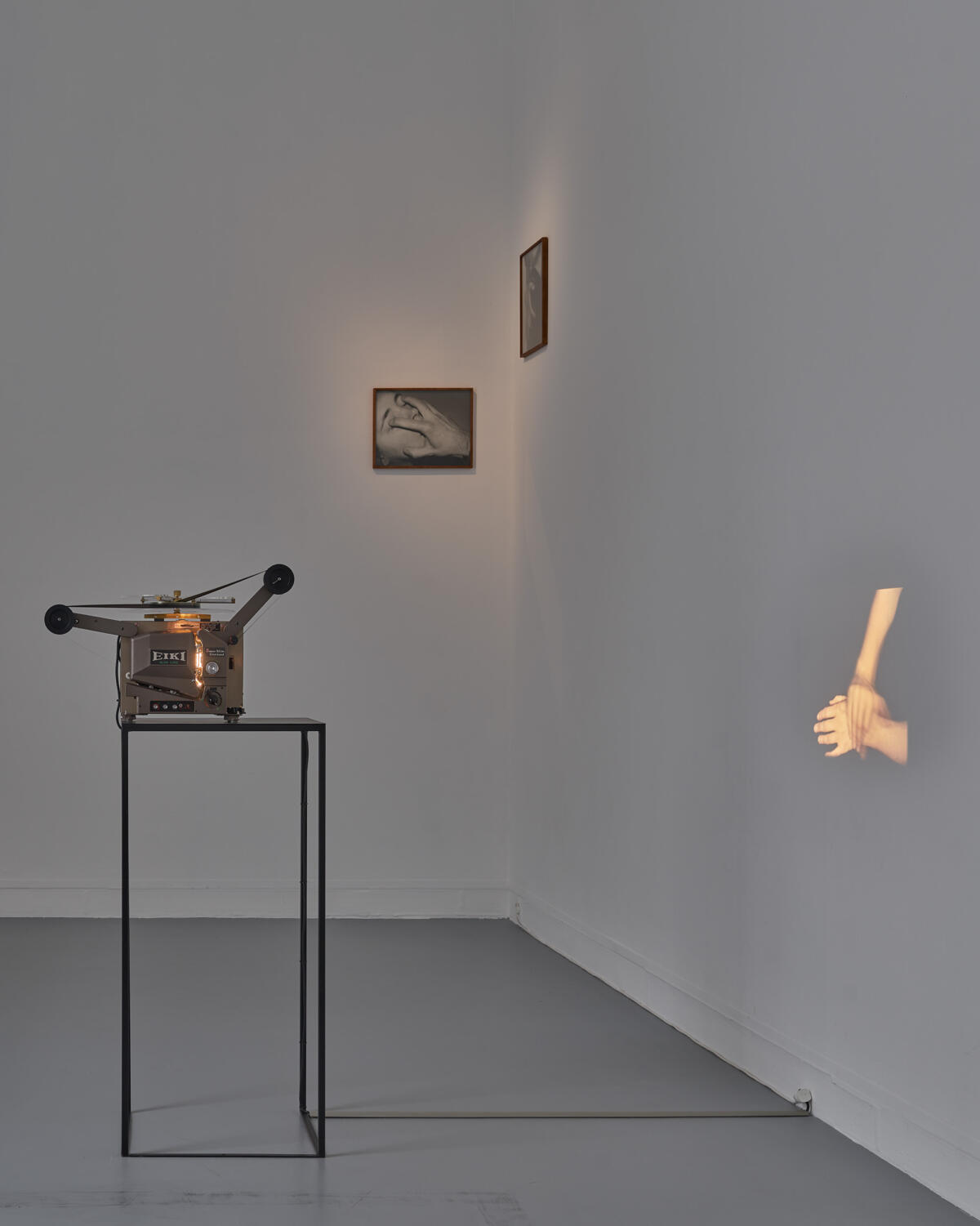 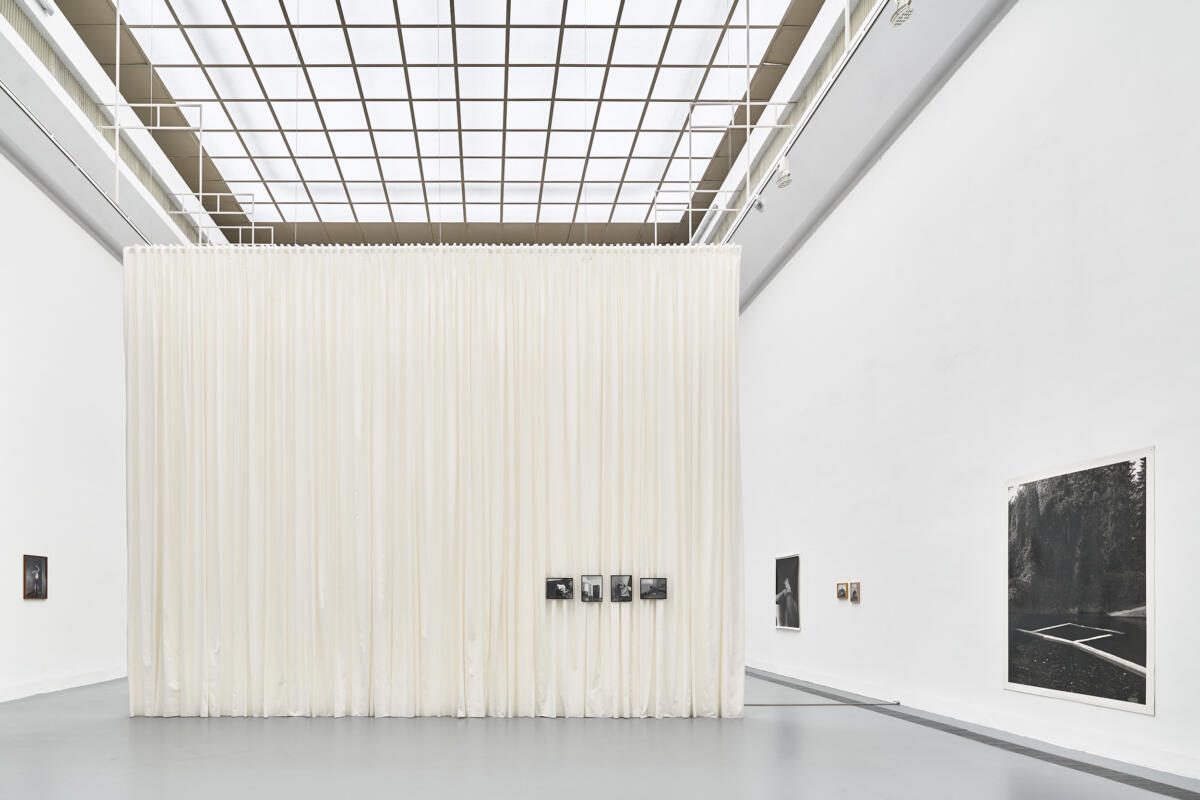 Your photography is connected not only with film, but also with performance. Do you consider yourself a performer?

I think that I feel more like a director or choreographer than a performer, because I myself never perform in my works. I always focus on staging and gestures, working with the body, arranging certain situations between people, or between people and their surroundings. It is a performative activity, which is why I often say that my photographs are documentations of little performances.

Your exhibition at Zachęta is titled Zaduch, a translation of the title of your first book, Frowst, which brought you international success, and to which you have now returned.

I have decided to revisit this word, ‘frowst,’ although it has a reduced meaning when translated into Polish. In English, we can use the word ‘frowst’ as a verb and then it has a positive meaning. For example, ‘warming up,’ as by a fire. It is because of the ambiguity that I decided to use the word. Frowst the book, in my understanding, refers to both positive and negative aspects of interpersonal relationships.

How do you understand it today? Do you feel this ‘frowstiness’?

The Polish translation I have opted for has a rather pejorative undertone, mainly connoting a lack of fresh air or even the inability to take a breath. I have the impression that in the context of the takeover of power by the Law and Justice party (PiS) and, consequently, the threat to human rights and freedom, as well as to personal dignity, this word seems especially apt.

Joanna Piotrowska (born 1985, Warsaw) is a visual artist and photographer. She studied at the Academy of Fine Arts in Kraków and at the Royal College of Art in London. Her works have been exhibited at the Museum of Modern Art in New York, the 10th Berlin Biennale, Tate Britain, Kunsthalle Basel (solo exhibition), and elsewhere.

The text is an effect of work on the exhibition I Do Not Share with Anyone which was to be shown during Cracow Photomonth 2020. Information on manifests, presentations, conversations and artworks made by the participants of the exhibition and a PDF catalogue will be available on the website photomonth.com/pl/portfolio/z-nikim-sie-nie-dziele.