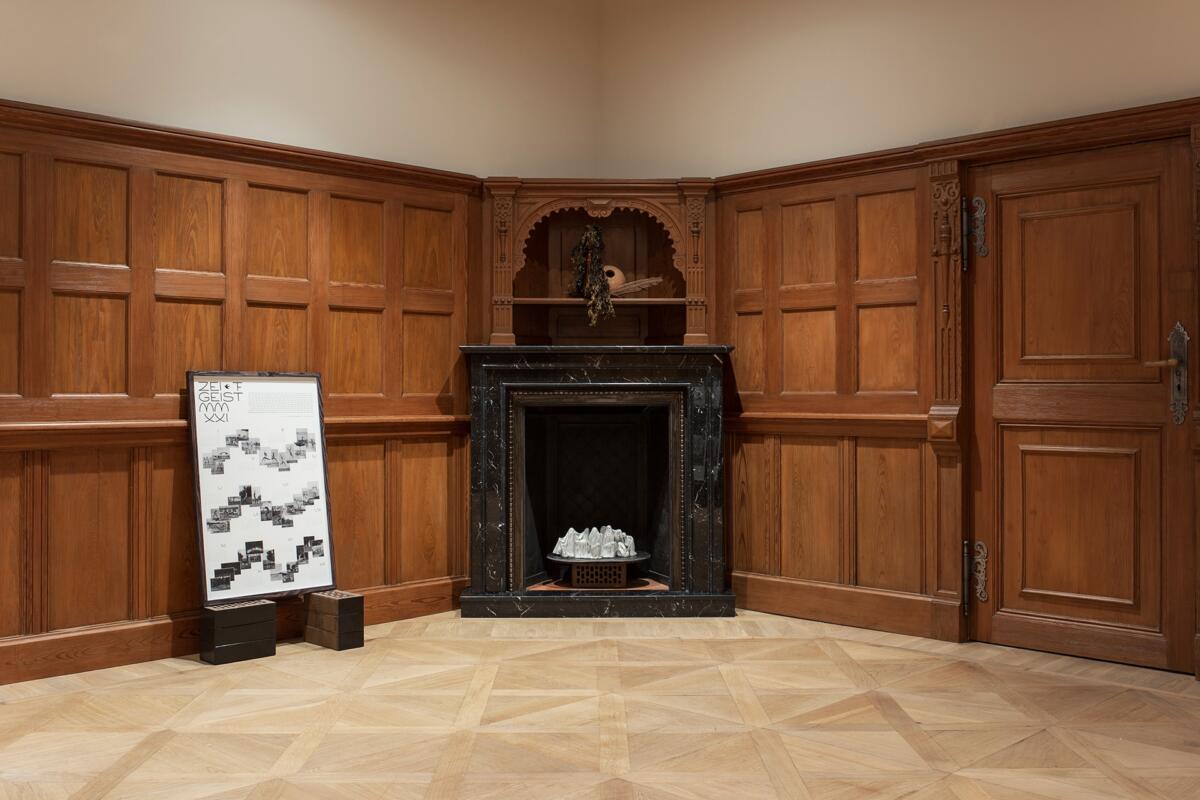 Scope eludes my grasp, that there is no finality of vision,

that I have perceived nothing completely,

„ZEITGEIST MMXXI calendar for the new old times is a work consisting of thirteen collages made by Patrycja Orzechowska based on selected photographs from the book Gymnastik als Lebensfreude [Gymnastics as the Joy of Life] by Paul Jsenfels, published in 1926. The photographs show young women and children—students of the Sopot Gymnastics School [Gymnasticschule]. The figures are naked or dressed in loose, flowing robes, joyfully raising their hands to the sun, exposing their bodies to light, air and water. Their figures are often captured in a moment of synchronicity, creating a geometry consistent with the surrounding nature. Their poses are intertwined with images of nature—with views of forest, beach, sea and sky. There is also the recurring motif of the circle, the symbolic closure of composition and time.

The series of collages take the form of a calendar, in which each month has a different characteristic motif. The year 2021 is an element of an endless rhythm, which marks its presence in the past and future. The arrangement of days and weeks from this year is also the arrangement that was in force in 2010, 1982, 1843 or 1926, among others, and will be in force in 2027, 2049, 2083 and beyond.”

from the curatorial text of ZEITGEIST Patrycja Orzechowska exhibition (15.01-05.02.2022) at Goyki 3 Art Inkubator, Sopot, Poland, curated by Katarzyna Sobczak, where the „ZEITGEIST MMXXI calendar for the new old times” was shown. 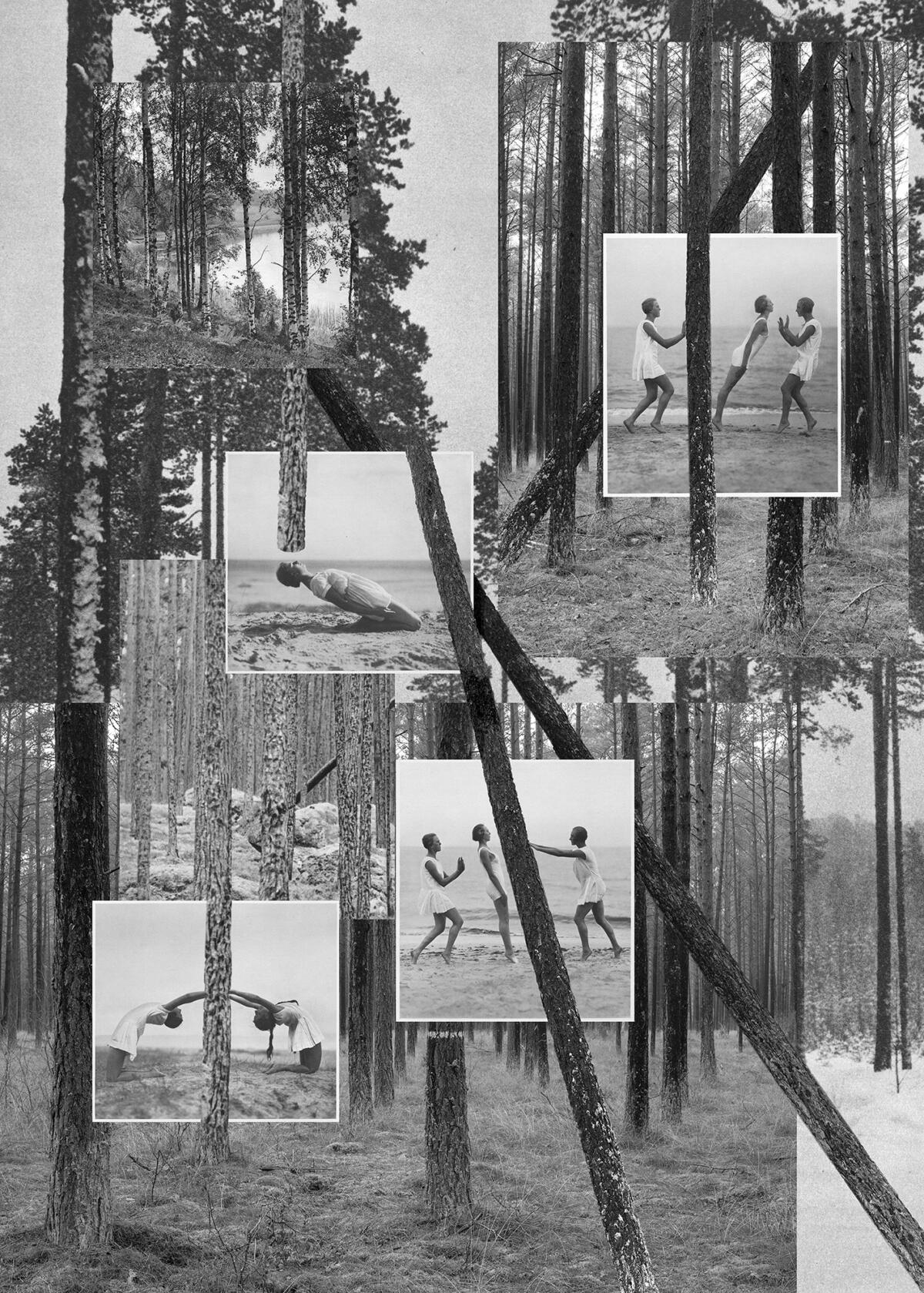 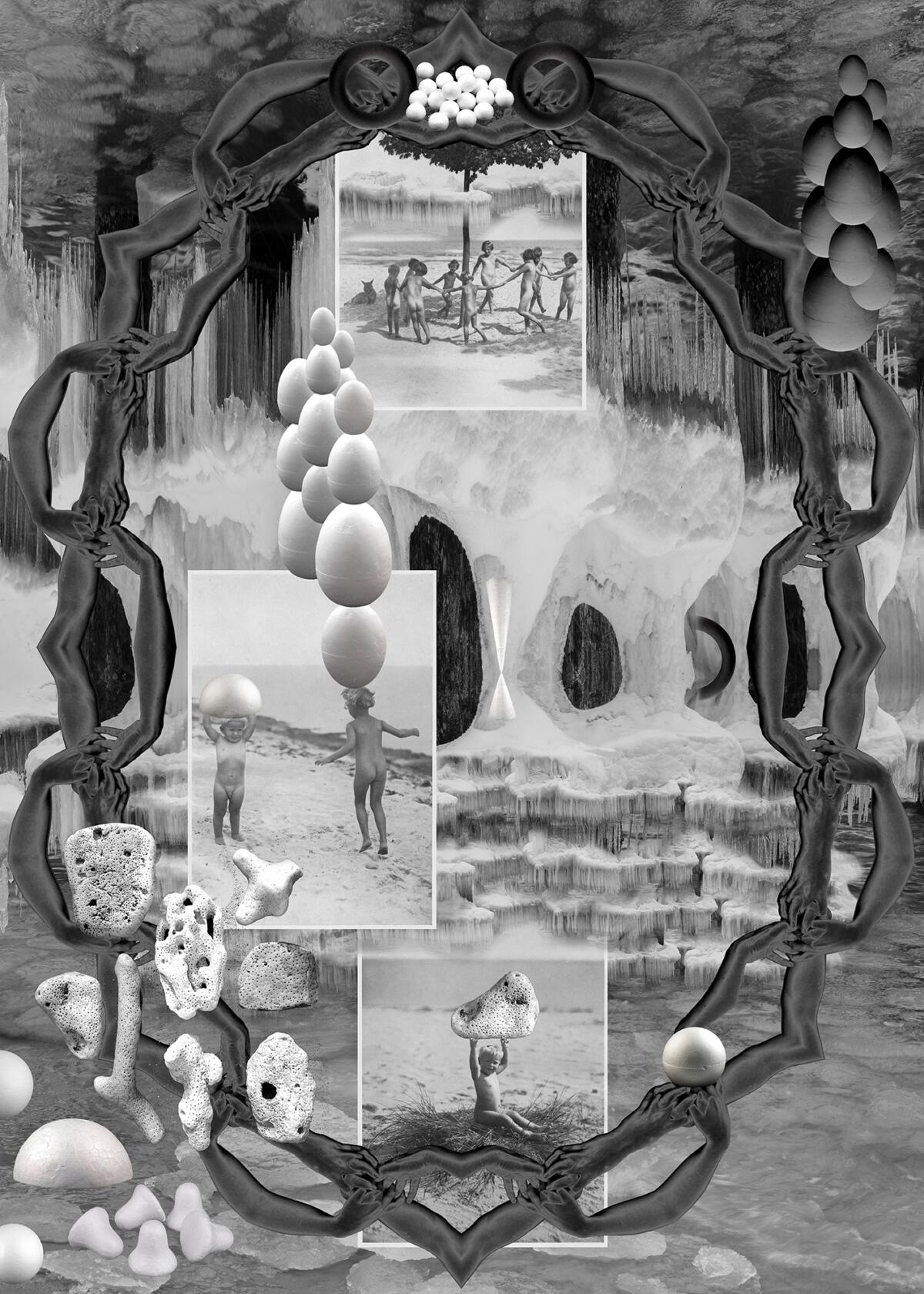 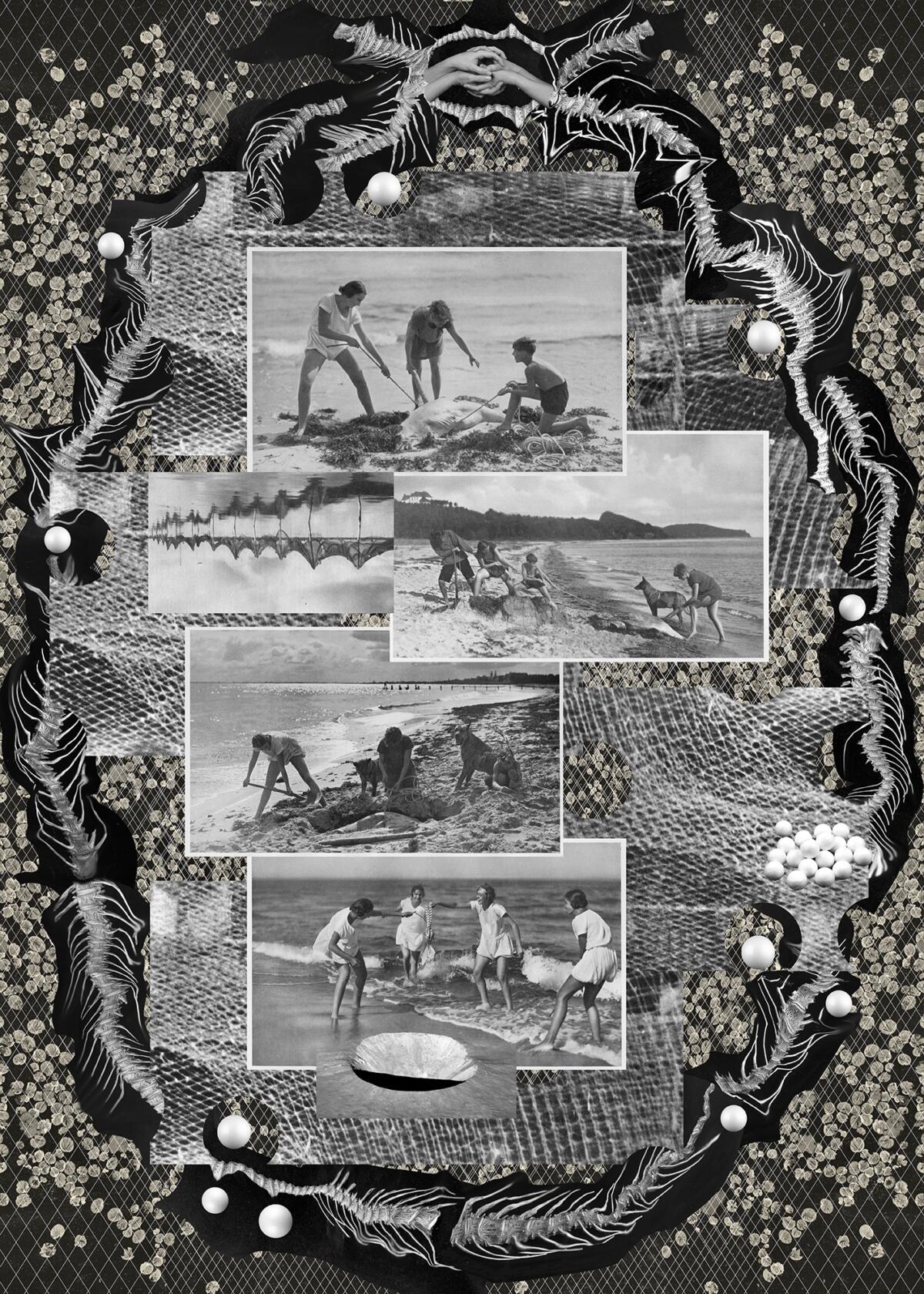 Patrycja Orzechowska, ZEITGEIST MMXXI Calendar for the New Old Times - May, 2020, courtesy of the artist.

A calendar usually serves us daily, twelve months a year and then it expires. The calendar for the new old times, however, goes beyond the usual and stays with its user forever. According to the first part of its title – Zeitgeist – the project of Patrycja Orzechowska aims to capture a certain set of traits or symbols that are common for at least one generation of human socio-culture[1]. She decided to create artworks put together in a cycle that reminds us of a painful yet true-to-the-core cliché of history repeating itself. The concept is somehow close to the Kalendarz Bezdni (a project coordinated by Konrad Góra, Wiktoria Kruk, Dominik Podsiadły and Magdalena Worłowska, issued by papierwdole publishing house) where participants were filling in the big hole/the void with their ideas for the future, where a „bezdeń” (i.e. something bottomless, an abyss, describing a hopeless state of sadness) means without days. Useless artifacts paradoxically creating a space to meditate on the seemingly lost case of the future, the fate of our specimen on planet Earth. I find a similar space for reflection amid Orzechowska’s works, with their  multilayered provenance and subtle references to the  inevitable continuum of human-made crises.

Do I contradict myself?

Very well then I contradict myself;

(I am large, I contain multitudes.)

The project started with Orzechowska stumbling upon a book of Paul Jsenfels in Sopot City’s Museum and a place built on the Baltic Sea shore by the Katterfeld sisters: a school of gymnastics (nowadays we could call it a body-oriented workshop space focused both on adults and kids’ says the artist, and I agree, a bit jealous of those 1920’s and 1930’s mothers that could participate, probably for free, in Gymnasticschule). As most places in the crazy-expensive city of Sopot today, the building, located right on Mancowy Square, remained private property, serving tourists’ cravings in a restaurant in the place where fishermen used to hang their nets to dry. In the era of late capitalism and the late anthropocene, I look at this and other places depicted by scraps and fragments in Orzechowska’s collages and I am once again reminded of how powerful the unconscious drives and market laws are that  have shaped our reality since the XIX century. As it sounds vague and way too broad for this short essay, I will now narrow it down to three main scopes of perspective, through which I look at the works of Zeitgeist (….). First will be the mother’s eye, the one that I can not escape since I became a mom in 2016. The second will take us to movement and military practices, and the last one will try to embrace rituals, feminism, and the eternal context of today’s waste. The Gymnasticschule was founded on an idea that was  progressive for the time, taken from the late XIX century Lebensreform, a movement created as a counter-reaction to the mechanization of life in Switzerland and Germany[2]. The idea was that all humans are allowed and encouraged to profit from life close to nature, to take joy in moving freely, being fit, healthy, and naked. Being close to each other, close to our basic emotions, connected to each other. This movement was also very keen on alternative therapies and vegetarianism. Yes, after more than a hundred years we can still experience it: via the individualistic cult of being responsible for  one’s health and prosperity. As the historian Eva Locher  states in an interview „They (the Lebensreform ideas) are actually very compatible with the neoliberal view that everyone is responsible for their own welfare.”[3]

As I once dreamed of participating in a forest nursery, an all-organic and privately funded Non-Violent Communication (NVC) organization for my privileged younglings, I am instantly moved by the collages with trees and children and/female figures in  the calendar. It also takes me to Monte Verita, the “Mountain of Truth”,  a cultural hub ensemble, an eccentric residency, a place in the Swiss Canton of Ticino where Paul Klee, Herman Hesse of Rainer Maria Rilke, amongst others, used to pop by to get some vegetables and rest in nature and take sun sanctuary. „Social organisation based on the co-operative system and through which they strove to achieve the emancipation of women, self-criticism, new ways of cultivating mind and spirit and the unity of body and soul” sounds great but also naive, as its co-founders believed that it would overcome national politics and markets and will sweep Europe and beyond. After 1920. the premises were bought by a rich banker and served as private retreat until it was turned into a foundation[4]. When I think of it now, looking through the black and white collages, I cannot help  but observe the  sad pathologization of an innocent idea into a profitable business, exclusively available for the white, rich and privileged class of Western Europe. Like the forest nurseries, like all those Montessori places (although Maria Montessori wanted her method to be public and free for all), like all that self-care influencer business on Instagram. I wanted my kids to go to the forest and all I got was a pricey bill. Maybe I should want them to become guerilla fighters instead? After all, we all know those legendary stories of resistance[5], hiding out in the forests, romanticized and glorified by the right-wing .  Would it be a better use of their bodies and minds?

Resisting bodies hiding in a forest may also lead us to bodies in arranged movements, known as „dances” or „choreographies”. As fun and innocent as it sounds, this could also become a tool of propaganda, serving ideas far from the joy and hope that are visible in some poses chosen by the artist for her imagery. What we know of  totalitarian showcases of power – the defilade, the mass propaganda spectacles during the Second World War and later, the bodies of sportsmen and women choreographed as living proof of certain political views –  is that it is based on apolitical, choreographic ideas, like Wigman’s emotional „pure dance” or Laban’s analytical „kinetograms”. 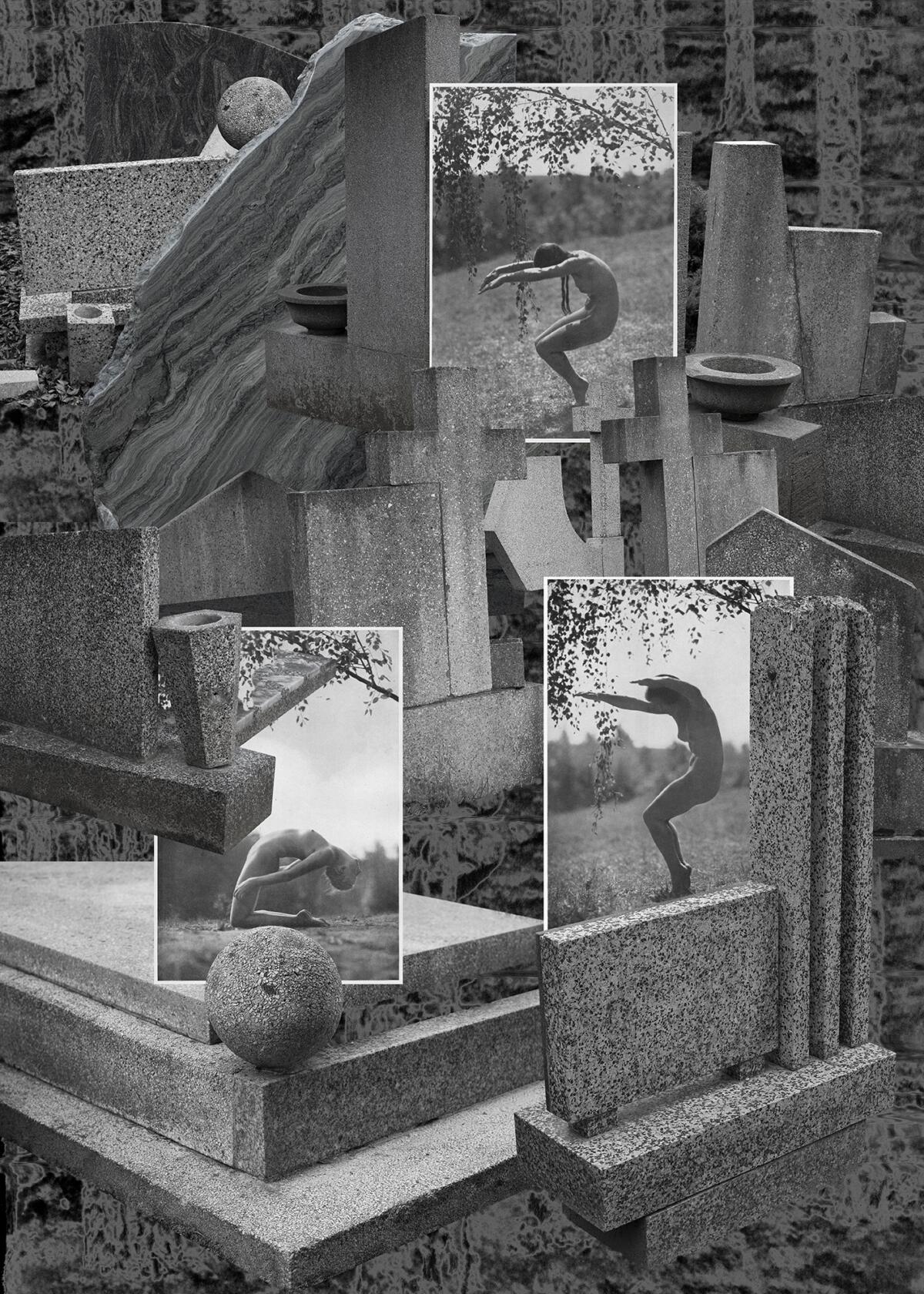 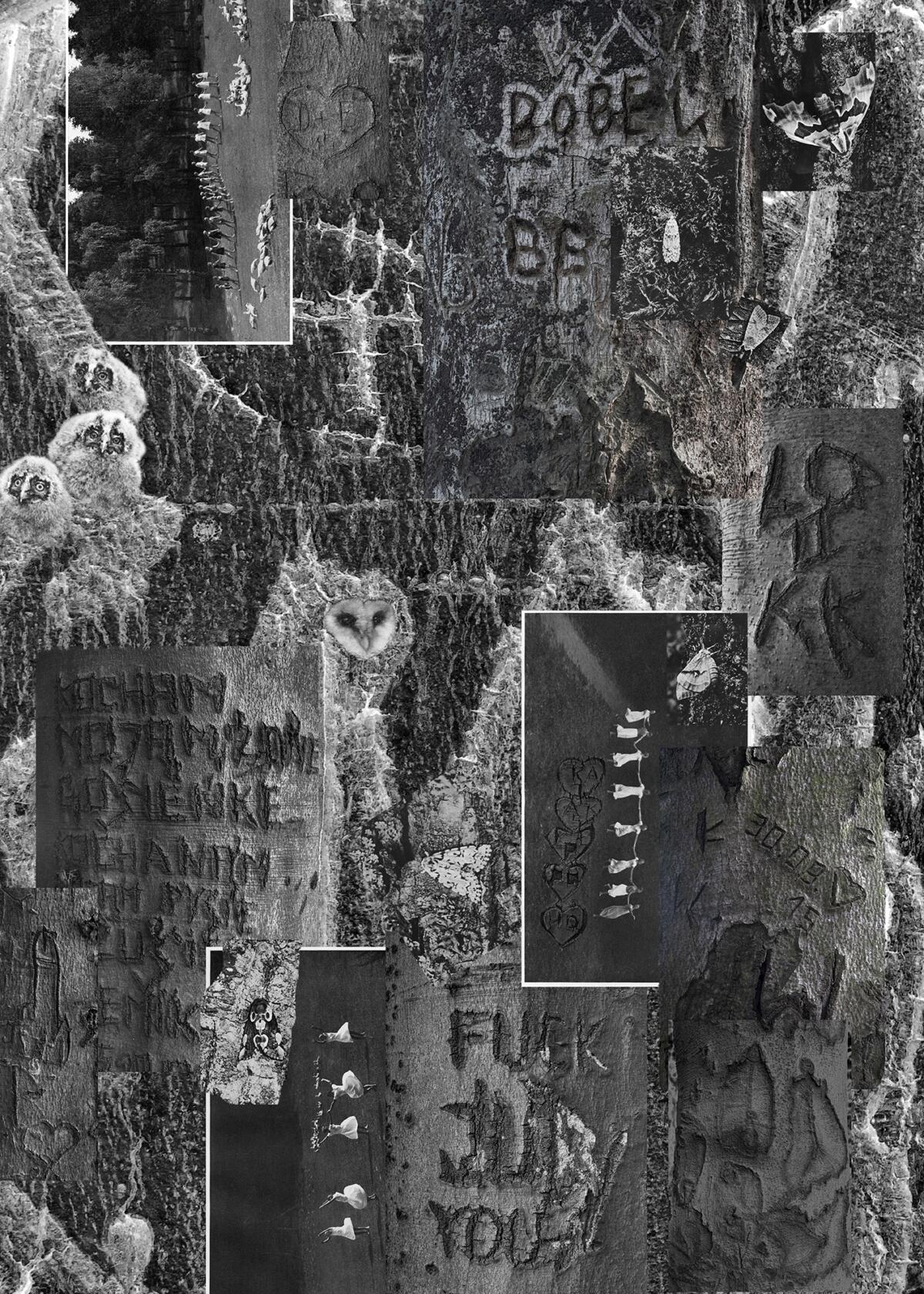 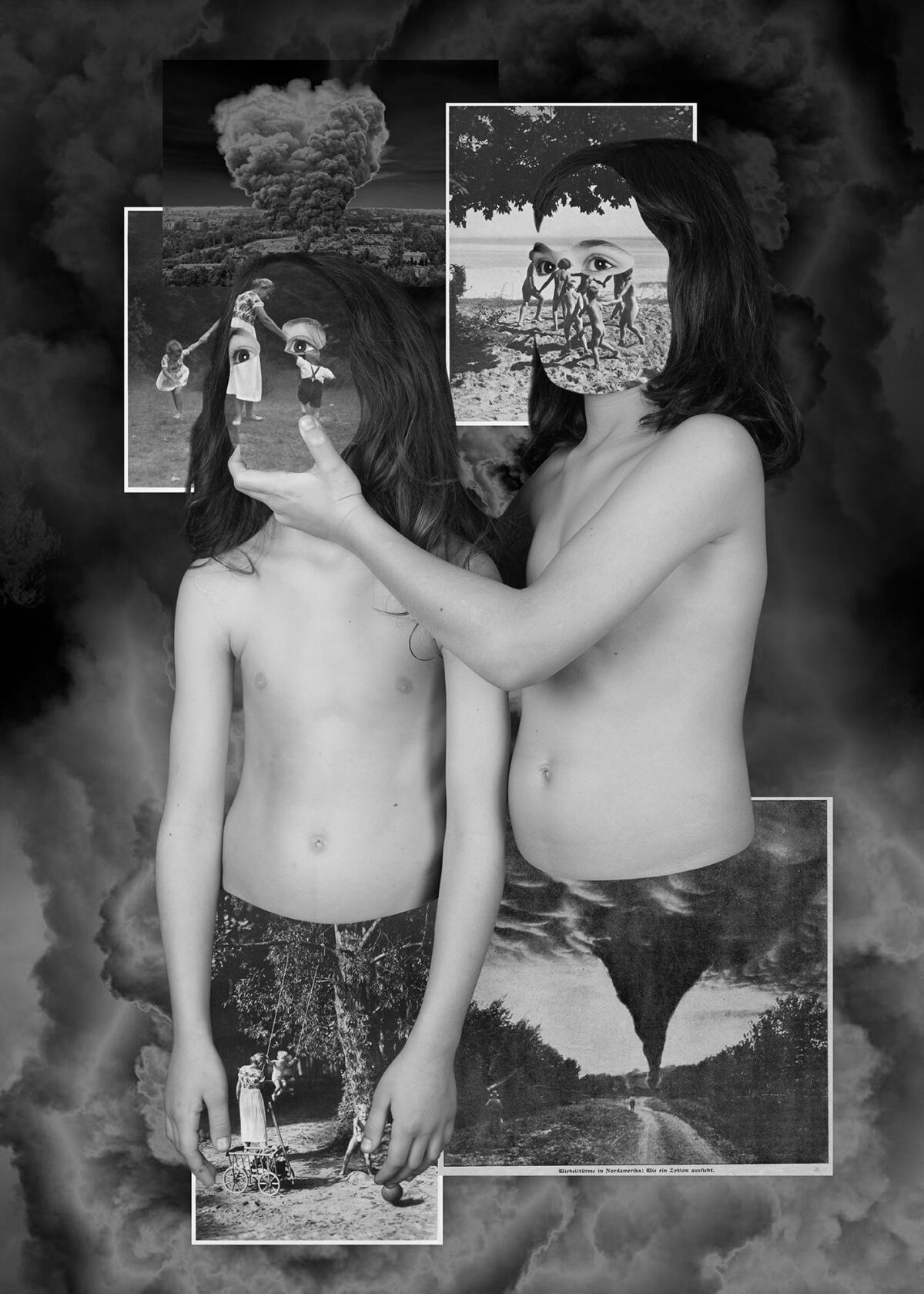 I read those bodies from Orzechowska’s works as being brutally incorporated into unsettling surroundings. Given the recent war crimes of Russia in Ukraine, how can I not filter those images with images of  the brutal killings in Bucha or Mariupol; bodies of women, men, children, and animals lying on the streets, always in multiples, never alone. I wonder if the soldiers raping and killing together also felt a muscular bonding, a phenomenon first described by historian and veteran William McNeill. That is this common yet often unspoken feeling of cohesion and synchronization, a synergetic power felt through a body moving together with other bodies of the same kin, a „me” being dissolved into a mass of „we”. This effect is both liberating (vide: culture of rave) and dangerous, as it may lead to “losing oneself in the crowd can lead to behaviors that are not part of an individual’s ethical codes and moral values (e.g. aggressive acts toward members of other groups). This stems from the fact that acting for the benefit of one’s group typically means acting against the interests of competitive groups” as the report from 2019 on interpersonal entrainment stated[6].

I feel that here, in the space of Zeitgeist (..): there is an invitation to a discomforting exercise (and I am also linking your attention here to an artwork that is a bit older than Patrycja Orzechowska’s collages: Exercises in Perception by Hungarian media artist Martha Kicsiny, which also employs bodies in order to test our vigilance in terms of abuse and freedom). How far, and to what extent are we collectively willing to bend and distort our bodies and our perspectives? A couple of fake pearls and styrofoam eggs mark my way toward the last reflections. A ritual (or a cultural totem rather) wrapped around a human-being will always be trapped in a never-ending continuum between care and abuse. Abuse that circulates in networks, that goes so deep that even the most caring persons or institutions cannot see it, no matter if we speak about the general social prejudice or the architecture (a good read on care-washing and systemic violence towards women in public space here). How do we escape that damaging performativity?

And what will we do with the tons of everlasting plastic waste once the days of anthropocentric politics are over? Maybe we will create post-human totems as proposed in the calendar’s collages so that we can somehow survive that perpetual ritualization of aggression towards „the Other”.

I also wonder, following the artists free-association technique, how we will explain to our human and non-human successors on this planet, the appropriation of their bodies, of their living space, of their seeds and roots and oxygen. Perhaps, this is the savior complex speaking, but in the perspective of a cyclical calendar, on a continuum of similar events and experiences mutating over the last 200 years of our history, I am really worried that we owe them at least an explanation of what is lethal in the innocent idea of being naked in the sun, of what is fatal in a piece of jewelry, of how consequential  good intentions can be.

The author would like to thank Patrycja Orzechowska for being the careful first reader of this essay. 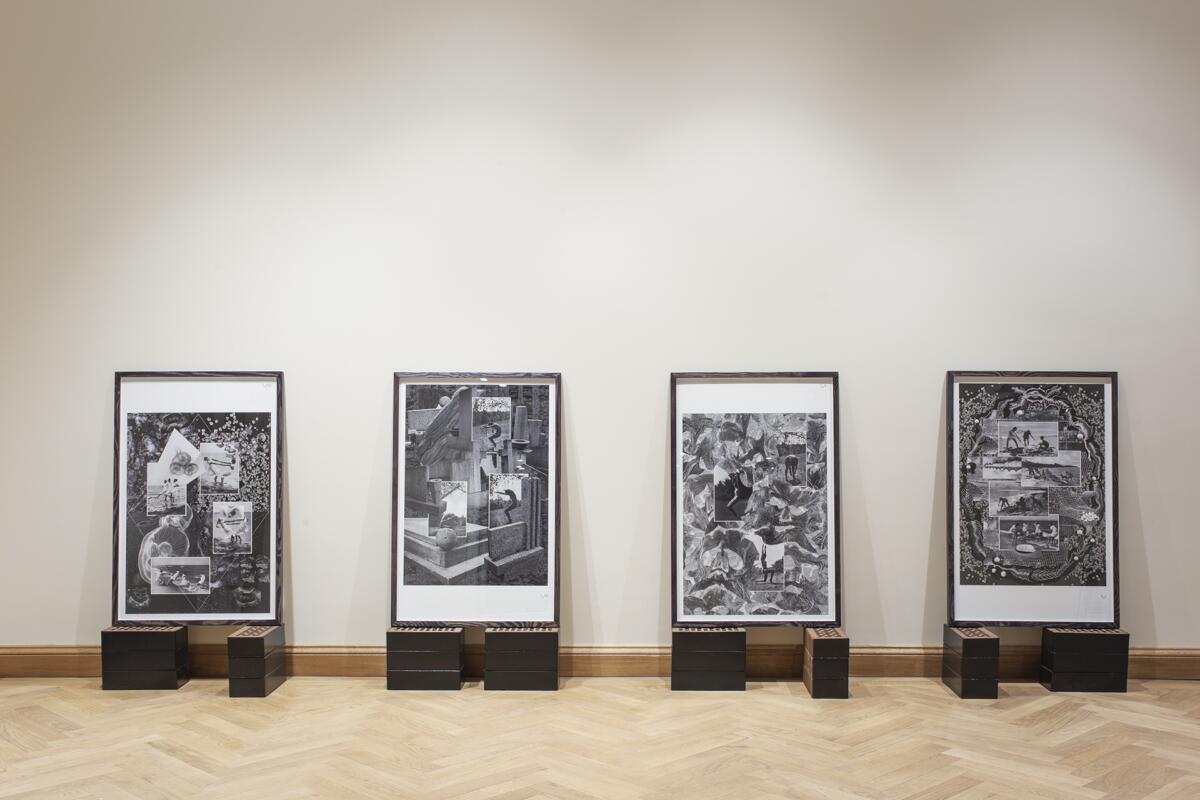 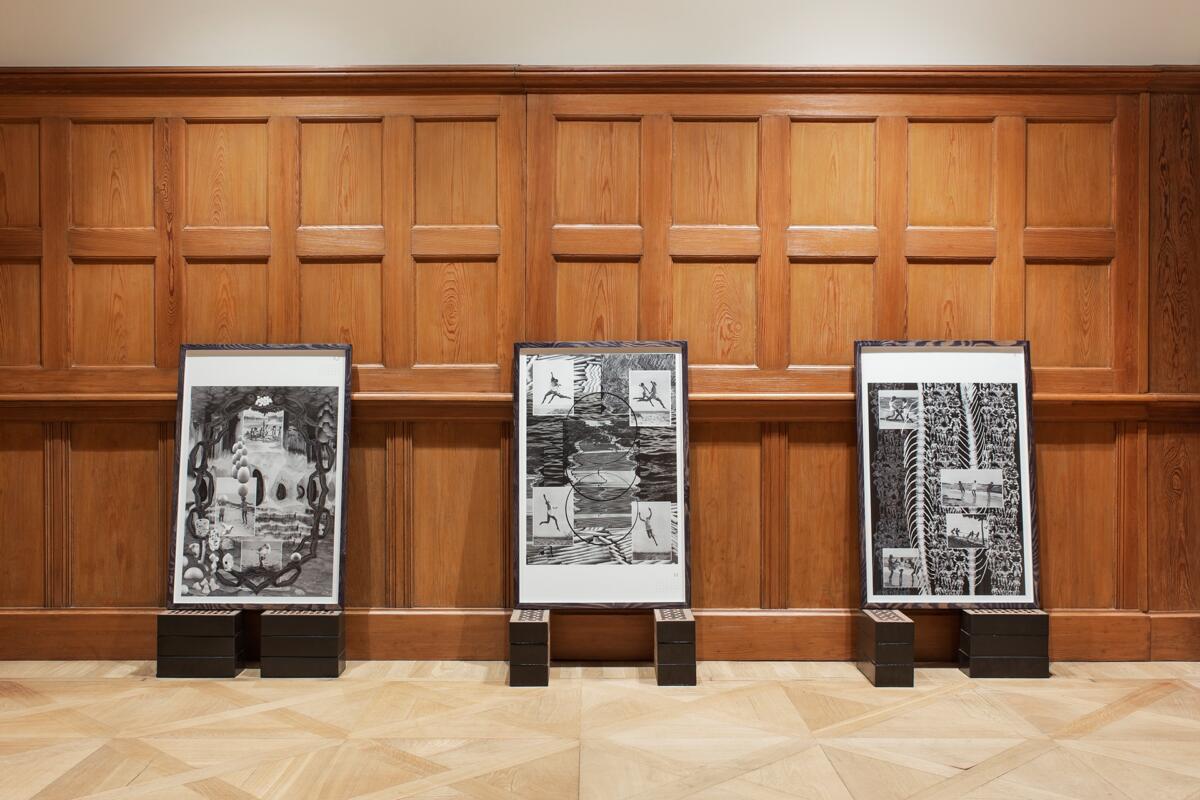 [1] I follow here a definition proposed by Alka Dudek, semantic philologist, [znaczenia.com.pl, access: 08.04.2022] that Zeitgeist is a conglomerate of culture and intellectual ambiance in terms of a certain era or as in a general time-scape characteristic.

[2] to read more about the ideas, history and the current echoes of the Lebensreform (Life reform) see the publication “Live better! The Search for the Ideal Way of Life” that accompanied the exhibition of the same title at the Bernisches Historisches Museum (13.2.2020-5.7.2020) [access 20.04.2022]

[5] I put all partisans fighting against- here (Jewish partisans during WWII, Polish soldiers „forest brothers” fighting against the Nazis and the Soviets, and other guerrilla forces from Eastern Europe and beyond.