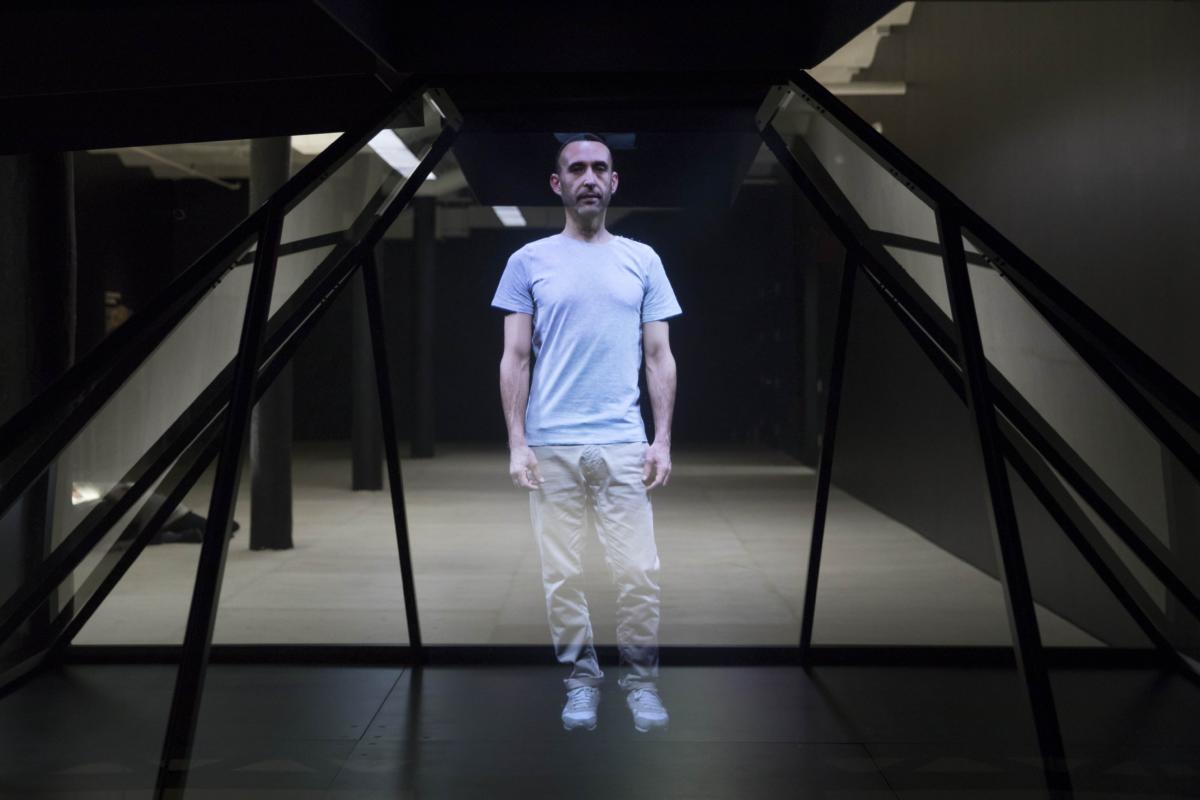 “Alexandra Pirici: Co-natural,” 2018. Exhibition view: New Museum, New York. Photo: Julieta Cervantes
I am interested in the fine line between the real and the unreal/the imaginary; in the end fiction, images, narrative and the imaginal have an immense pull on (other) material manifestations of reality.

New York City–How often is memory reconfigured in public space to form new icons that overwrite and block out history? Benjamin would call this reconfiguration, or destruction of memory, a barbarity that signals fascism. In the absence of official forms of contestation, art working becomes a mechanism to protest but also to remember–to resist the hegemony of nationalistic nostalgia culture.

For the Bucharest based artist, Alexandra Pirici, the body becomes the vessel to remember but also to reformulate memory that has been uprooted. In her work, bodies assemble themselves into monuments but also technological algorithms. Often compared to contemporary artists/choreographer Jerome Bell and Tino Sehgal, Pirici’s work is also akin to earlier conceptual artists who worked on memory and monuments, especially in a post-socialist, Eastern European context. Such artists include the eponymous Bosnian and Yugoslavian artist, Braco Dimitrijevic, but also can be seen in light of other methodologies developed in Balkan countries such as the Group of Six, who exited the museum space to form interventions in the 70s.

In a recent lecture at Neuer Berliner Kunstverein in Berlin “Re-membering and the Body as Technology” (part of a day long lecture Art and Politics), Pirici explains that she is interested in the activity of “remembering as a practice of contesting representation.” She explains how her early work, such as “If You Don’t Want Us, We Want You” (2011)–where performers mimicked a newly erected equestrian statue in the streets of Bucharest–was a response to the post-socialist climate of the city and the country’s overnight re-writing of history by replacing Soviet monuments with different statues. The same process occured in Croatia in the 90s to the monuments of partisans and also in parts of former German Democratic Republic. Though Pirici has worked largely in public space, many of her works often take place within the museum and reflect on technology and the changing nature of communication. As many cities are transformed into neoliberal sites of distributed surveillance, this re-division of space nevertheless also has repercussions on the body and how memory is convened.

Bellow is a conversation with the artist about her work “Co-natural” at the New Museum and reasserting the body’s presence in technology and information. 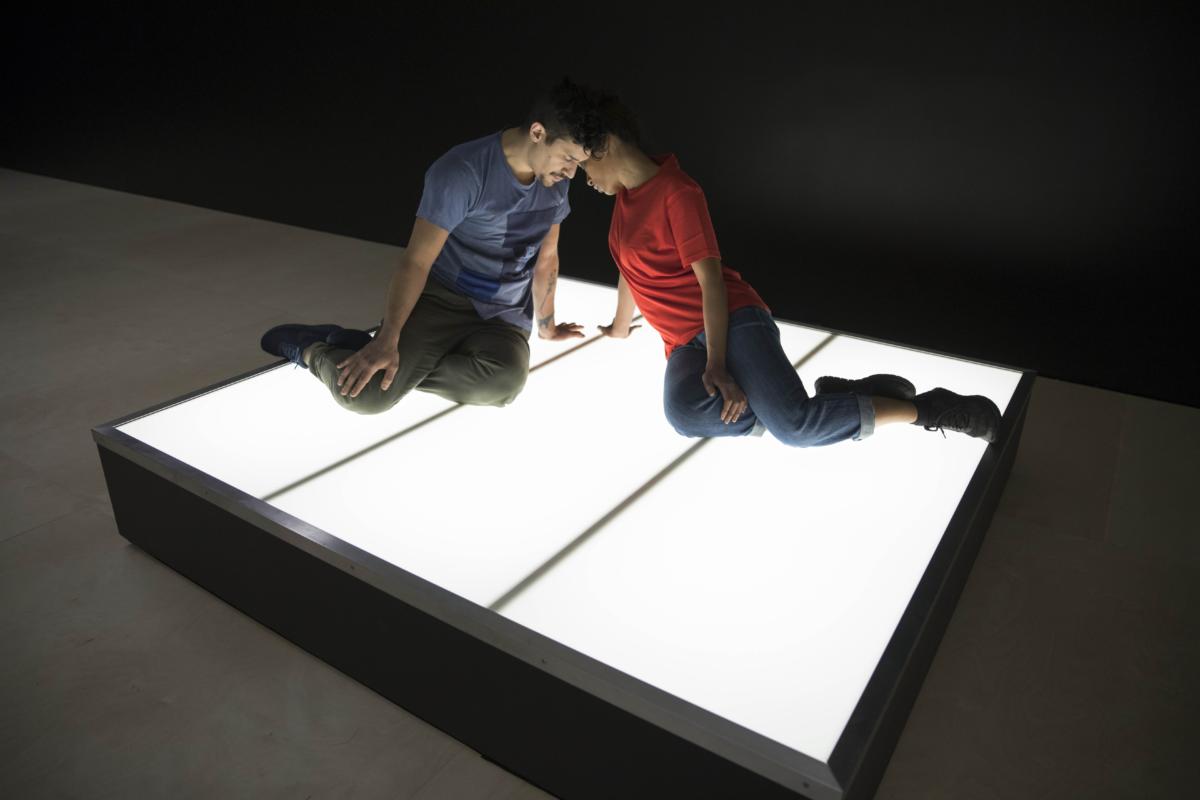 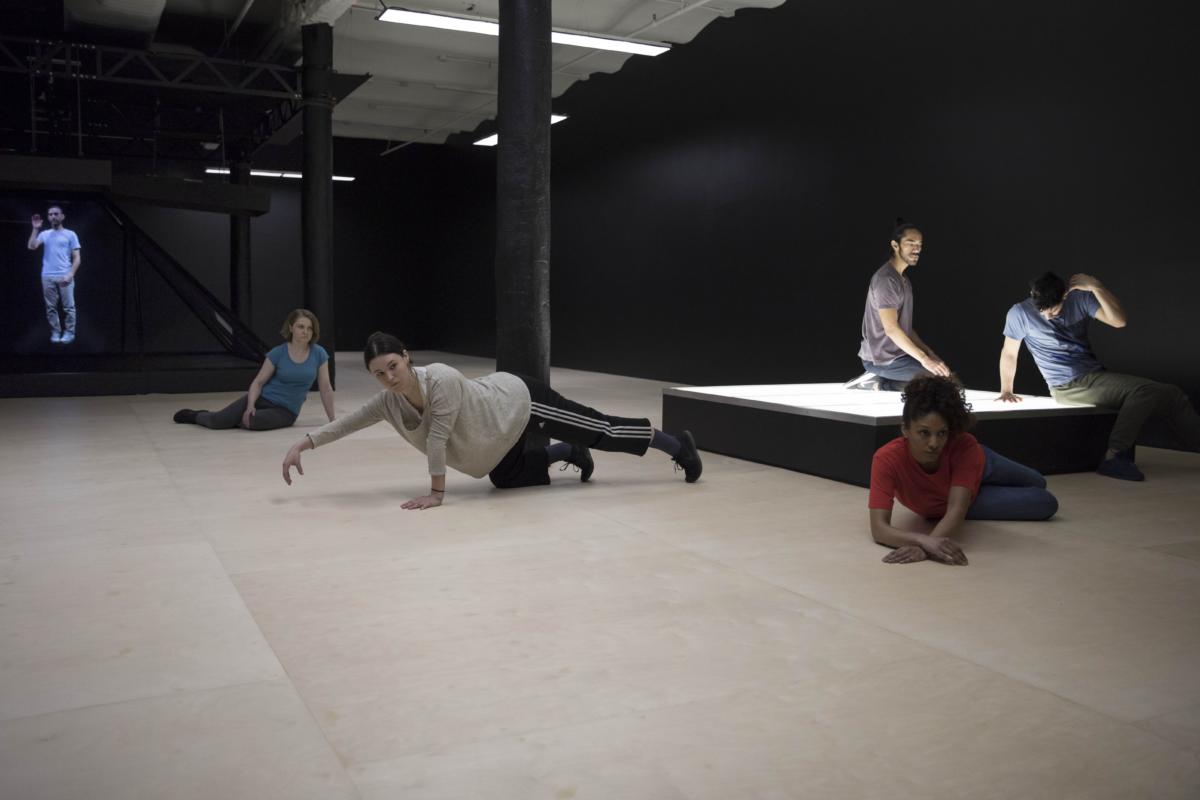 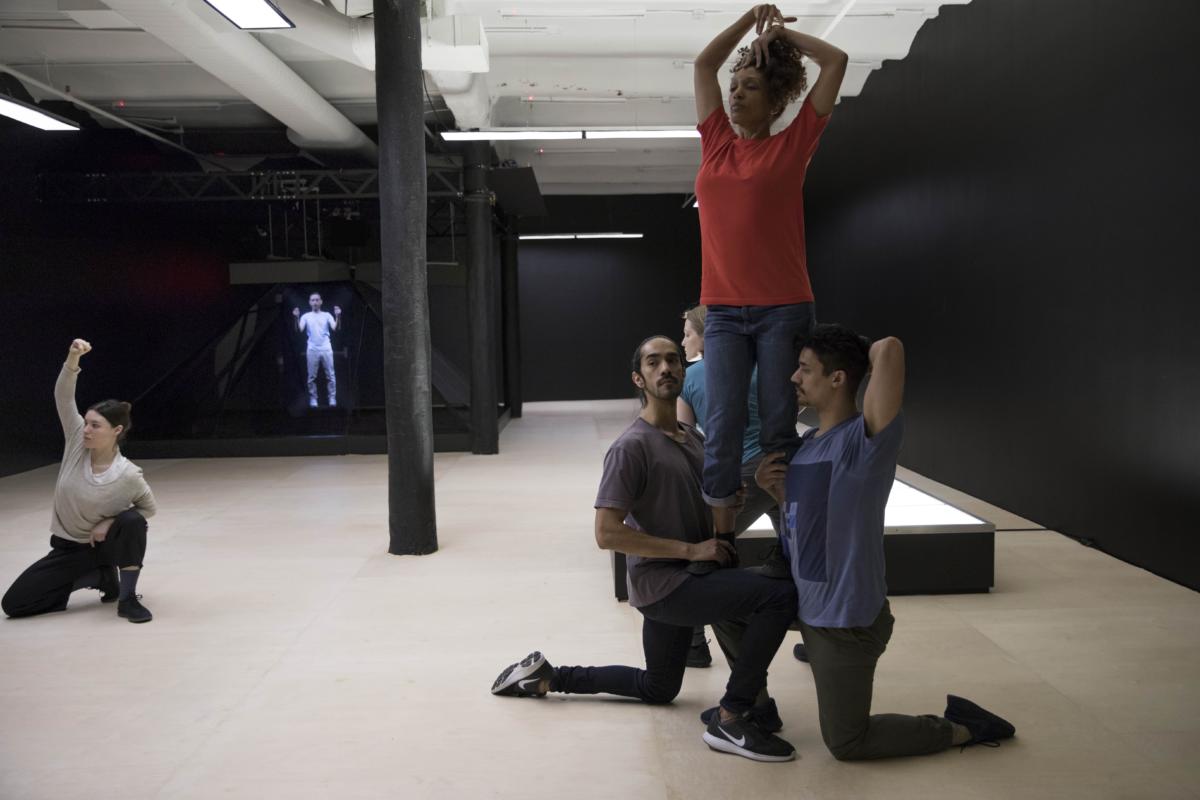 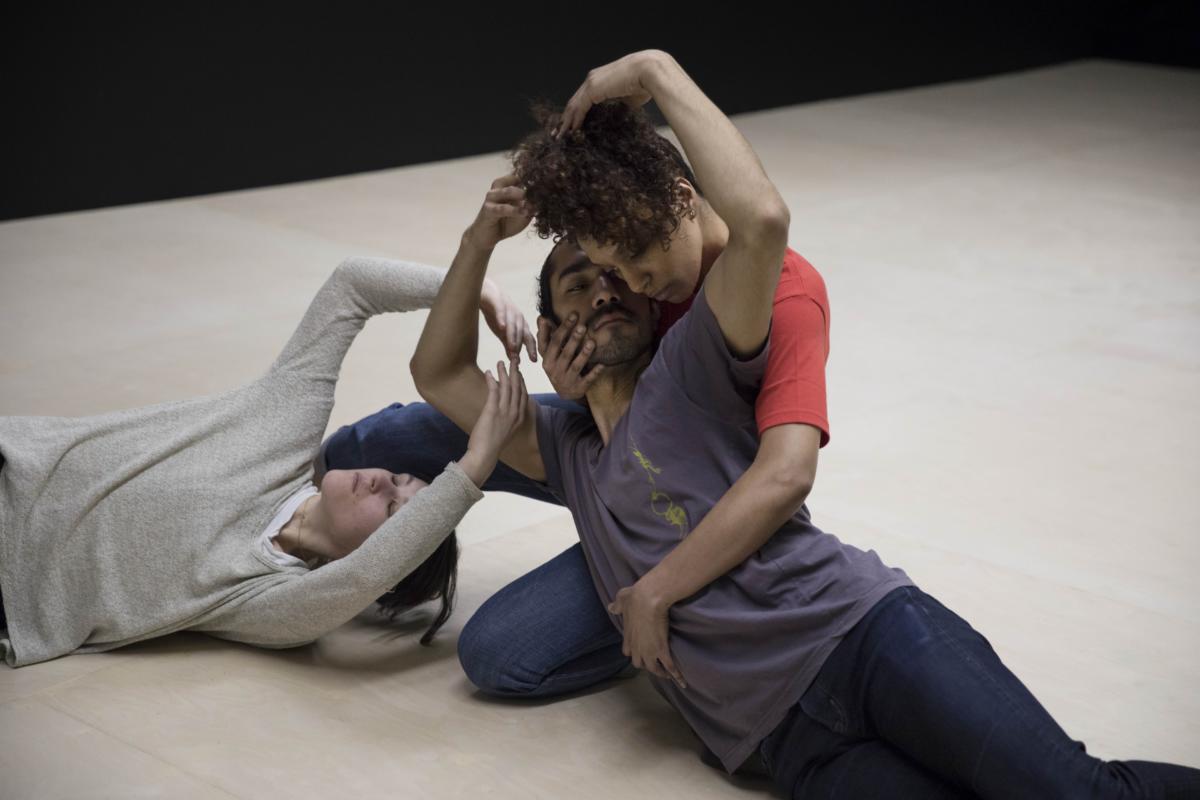 Vanessa Gravenor: The title of your current work “Co-natural” has immediate post-human implications. In the work, the performers configured into Caravaggio’s The Incredulity of Doubting Thomas, a painting that equates belief with bodily matter. How does your work respond to this lost doubting or the bodiless nature of information?

Alexandra Pirici: It’s a nice observation and yes, the reference to Carravagio’s Incredulity of St. Thomas in “Co-natural” is actually meant to answer or emphasize on this question, in the combination of biologically live bodies and the body of the hologram/ Pepper’s ghost display. I am interested in the fine line between the real and the unreal/the imaginary; in the end fiction, images, narrative and the imaginal have an immense pull on (other) material manifestations of reality. But nevertheless I say “other” material manifestations because information is not bodiless, it circulates on material support, be it live performers or the body of the holographic presence made of aluminum, LED screens, cables and so on. Just because we cannot always touch the full body of information it really doesn’t mean it moves around with no material support. So actually my work is also a lot about that, I think, about materiality.

The inclusion of the holographic performer comes from my intention to destabilise the concept of presence and even “life” or the “living” as something that can be contained or confined to a single material or biological support, to imagine presences and agencies that are leaky, transmissible, that can travel and be embodied anew.

Immateriality performed by the body has been a main concern of yours, perhaps notably in your collaboration with Manuel Pelmuş in “An Immaterial Retrospective of the Venice Biennale” (2013), where Romanian performers embodied the guise of works in the Venice Biennale, thereby also commented on their guest workers status in Italy. What was your reasoning for including holograms in “Co-natural”?

To be clear, the commentary on the guest workers status in Italy of the performers in “An Immaterial Retrospective of the Venice Biennale” is an outside interpretation, we never expressed such an intention and from my point of view, it is not relevant for the work. Also, as specified before, the holographic image is actually enabled by a very heavy, material body and there is explicit reference in the work to the materiality of this new body. The inclusion of the holographic performer comes from my intention to destabilise the concept of presence and even “life” or the “living” as something that can be contained or confined to a single material or biological support, to imagine presences and agencies that are leaky, transmissible, that can travel and be embodied anew. 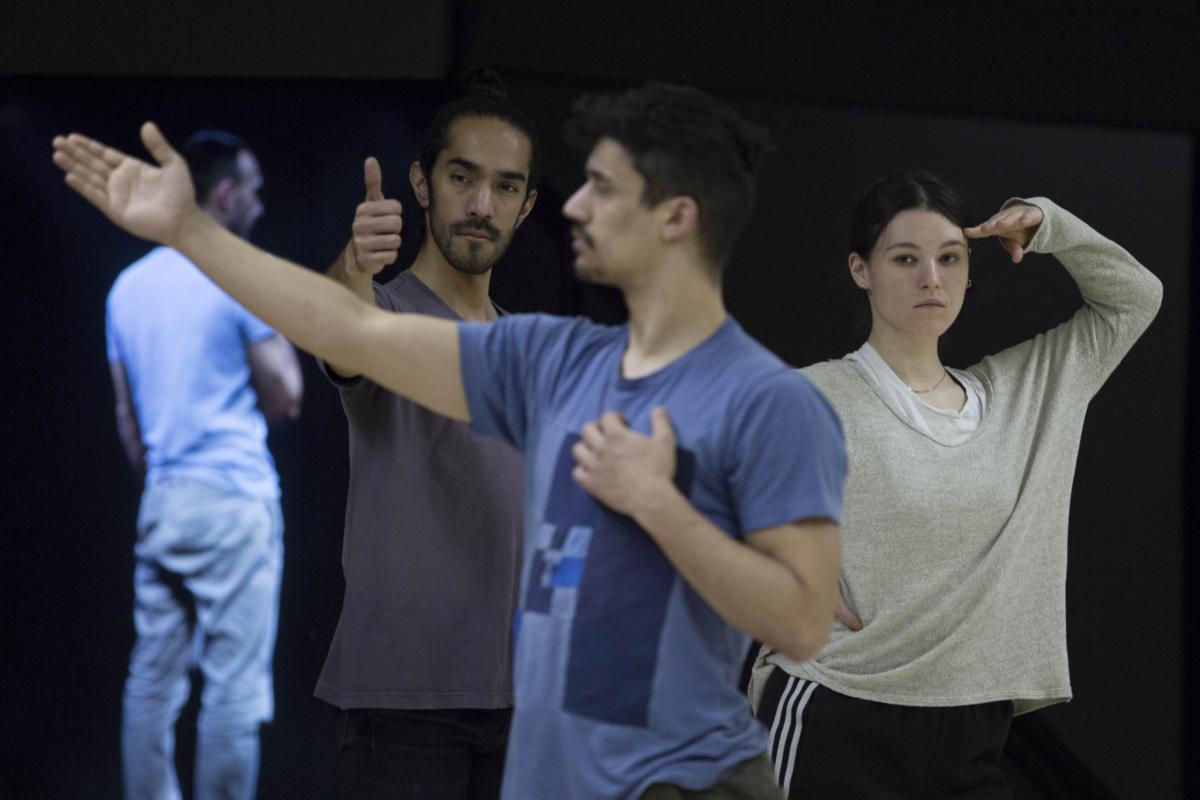 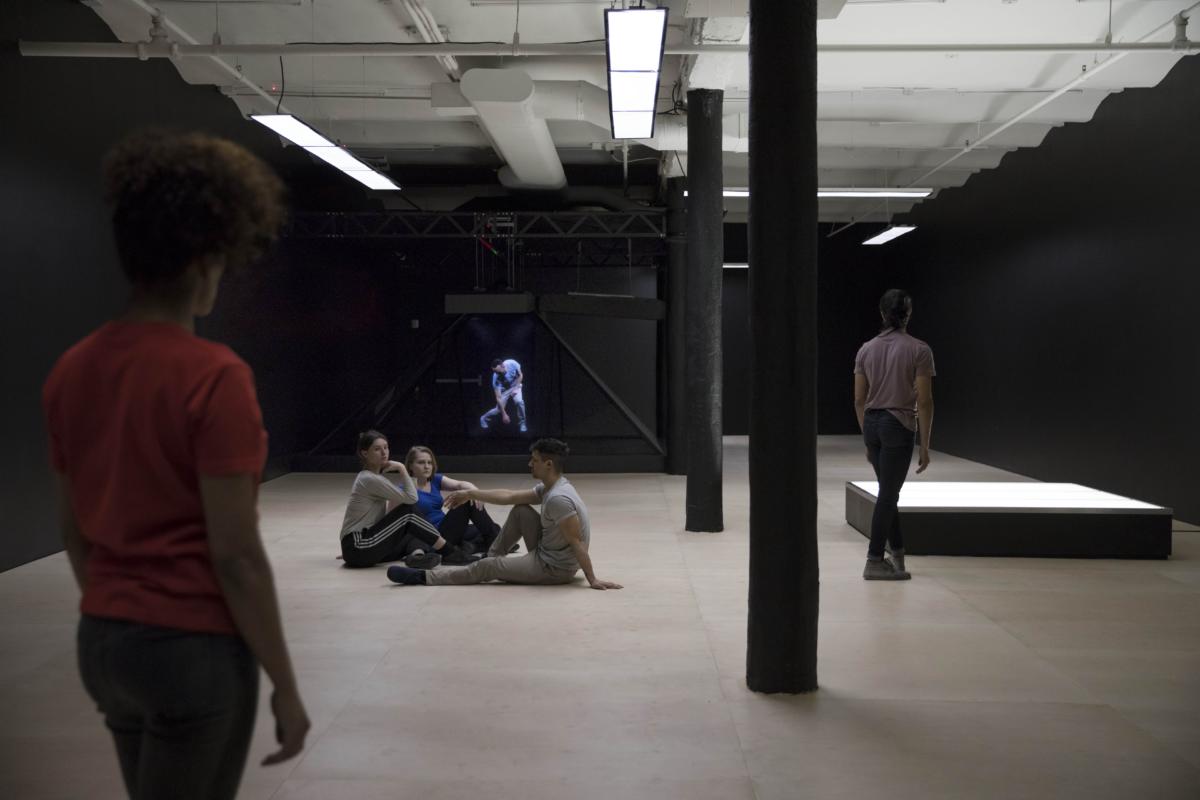 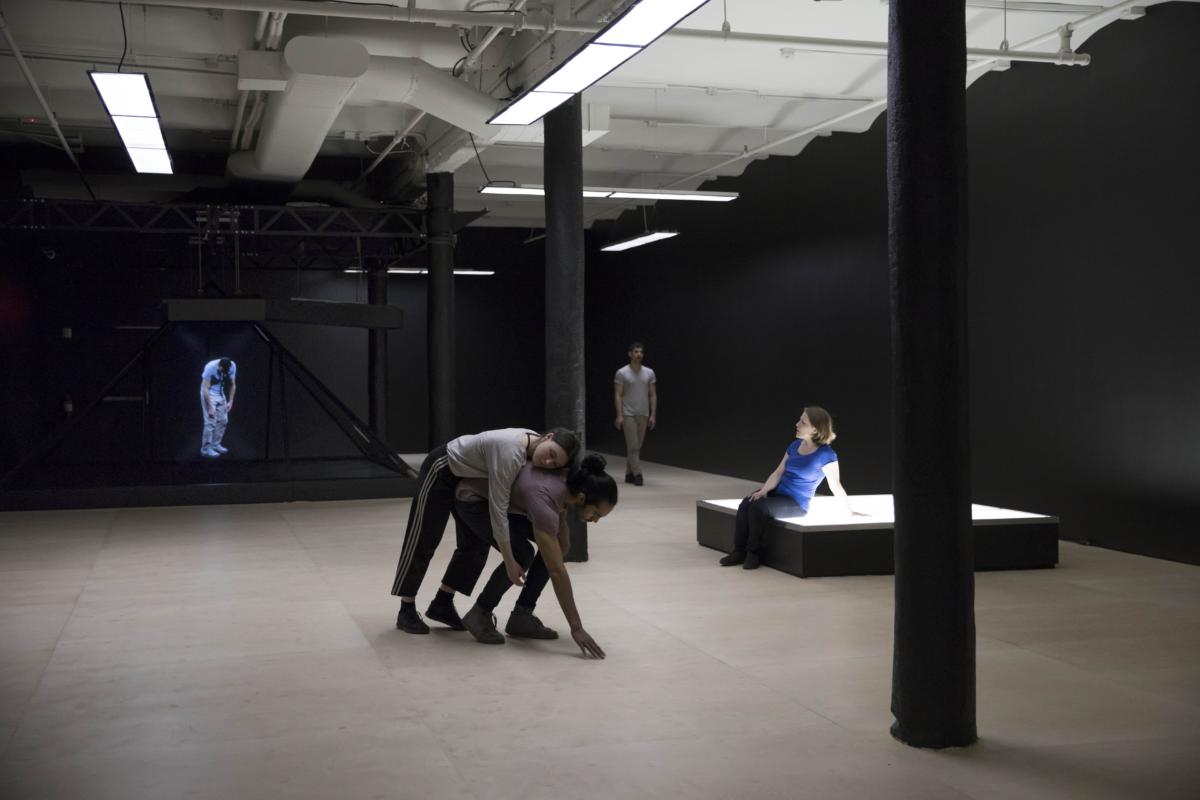 On the museum wall we learn of some sources for the content of these monologues including: Romica Puceanu’s Saraiman (1975), Robert Mapplethorpe’s Two Men Dancing (1984), and Tatiana Demitriu. Leaking Territories (2017) struck me specifically when a series of performers configured themselves into Siri and also notated the distance in time and space from the subject that they were speaking of. How do you choose your sources?

The performers configure themselves into a Google search engine in “Leaking Territories”. The sources are chosen in a highly subjective process and intermingled, like in “Co-natural” or “Signals” (2016), with invented, fictional events, actions, movements, texts or self-written music.

Going back to the idea of doubt or the missing body within technology, this absence of matter reminds me of the Turing test explained in his paper “Computer Machinery and Intelligence” (1950), which is all about drawing the line between humans and digital entities. Do you consider your performers distinct from digital entities? Do you draw this line at all?

I acknowledge a need for alliances and for considering the complex and entangled “nature” we are inhabiting and co-constituting today.

I never said there is a lost sense of doubt expressed in “Co-natural” (smile) and the performance of the holographic performer is a video footage actually, so not very “machinic” in the sense of distributed agency/ decision making, it’s not powered by an algorithm or enabled by a neural-net. I think there’s more like an increased doubt, actually, to what is real – or the nature of the real, which is more interesting –  that the work enables (audience members often thought, for a brief moment, that the hologram is real, and then that the live performers are actually not real). 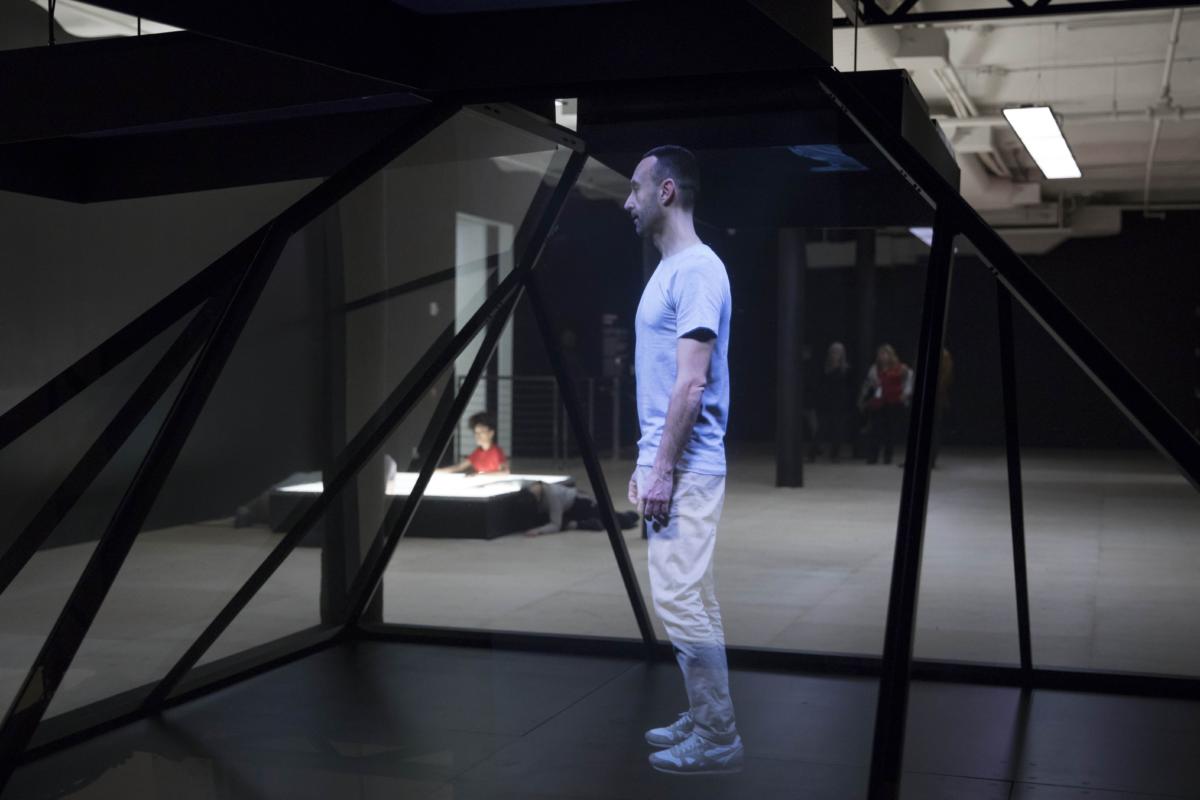 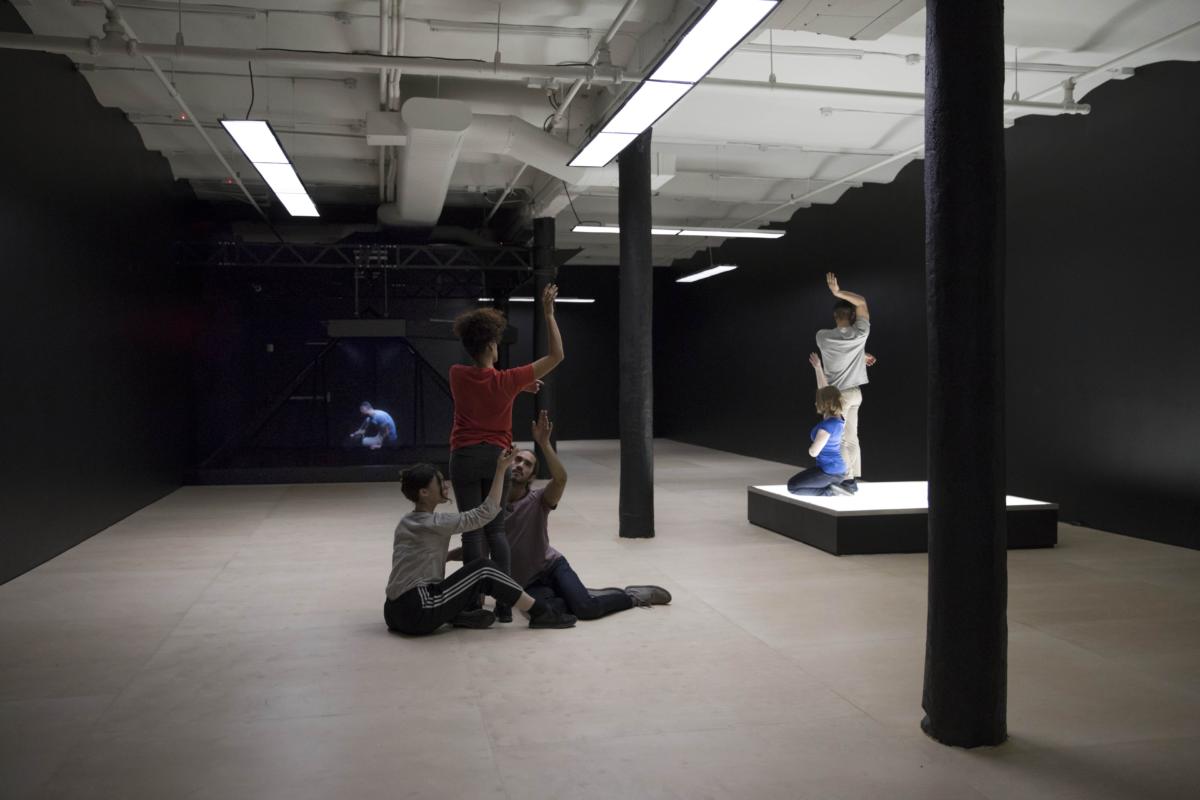 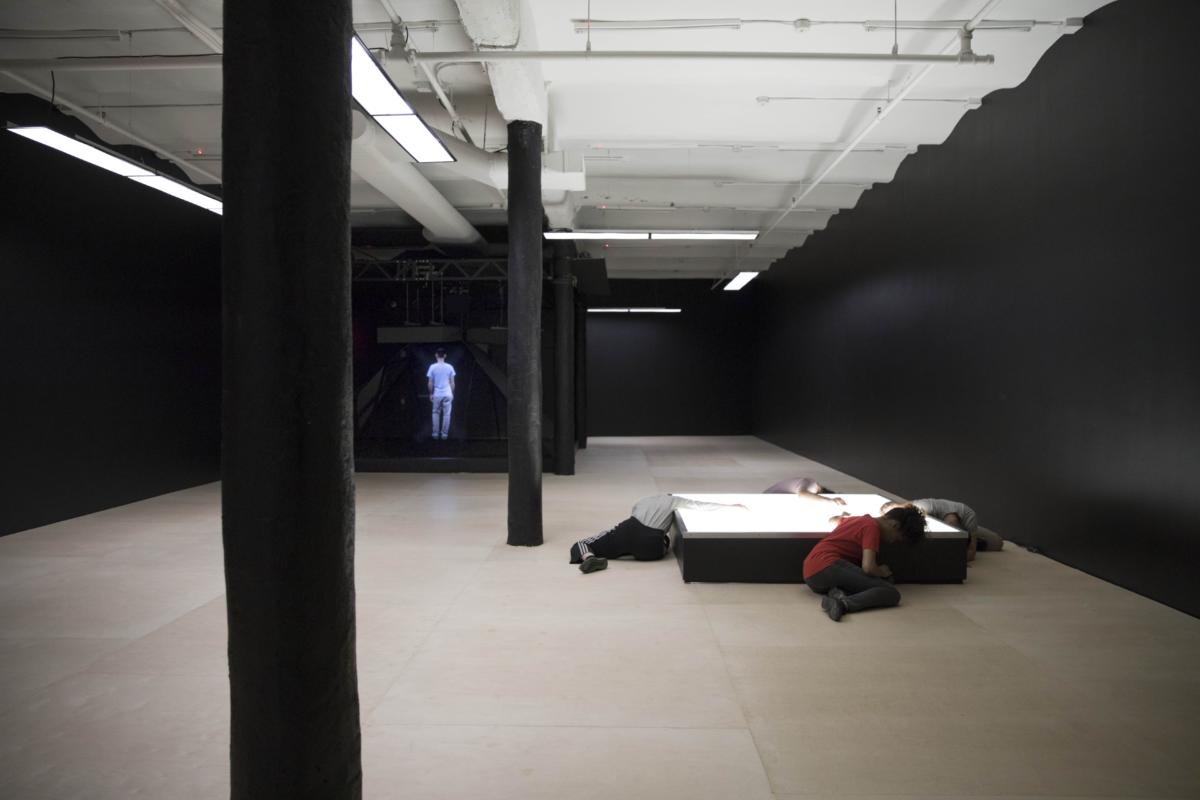 I am also well aware of the Turing test and the parlour game it draws on but I don’t think the work has much to do with it. Again, the holographic (actually Pepper’s Ghost) display in “Co-natural” is more about a visual illusion rather than a behavioral one. However, to the question of distinguishing (live) performers from digital entities I would respond yes, of course I do.  Nevertheless I acknowledge a need for alliances and for considering the complex and entangled “nature” we are inhabiting and co-constituting today. So it’s interesting you speak about drawing a line, I do and I don’t, I draw the line when it comes to medium and form of embodiment and I don’t draw a line when considering participation, influence and agency, somehow. Though I am of course against a naive infatuation with the post-human as a means to ignore or obscure the all-too-human politics written into digital entities or protocols humans eventually set and control to a large degree.