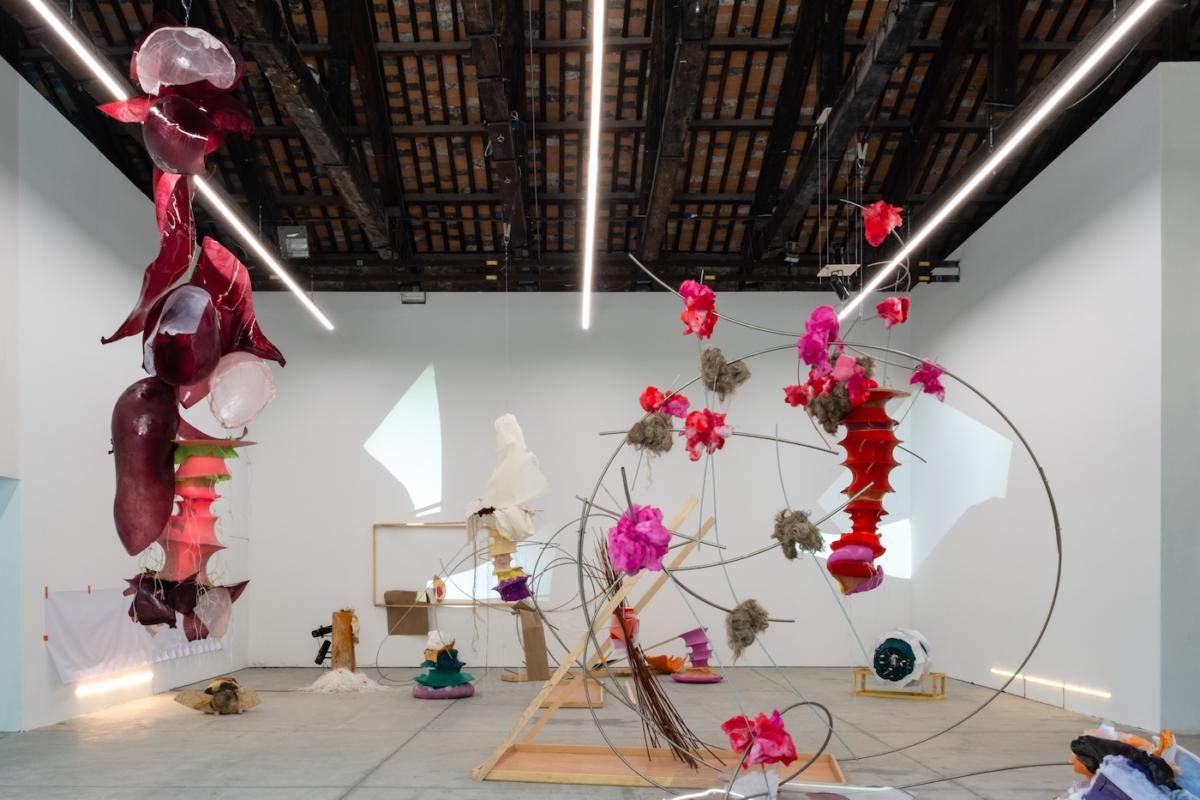 Daiga Grantiņa, Saules Suns, The Pavilion of Latvia at the 58th International Art Exhibition © Photography Toan Vu-Huu
The Venice Biennial is a kind of reality check for the Baltic countries. With its freshly shining and well deserved Golden Lion and a few special mentions, Lithuanian contemporary art community is using its international achievements as some kind of leverage to fundraise resources that are always lacking and claim for its significance for the general public.

Dorian Batycka: “Saules Suns” (Sun Dog) is physically composed of a combination of synthetic and organic materials. To what extent, if any, can the installation be seen as a kind of environmental commentary?

Inga Lāce: As an abstract sculptural installation it works in a very different register than eco-critique or environmental commentary. But the way how materials are woven together in the installation, how the interactions take place on material level – the process of casting the sculptural objects, leaving other materials inside, sort of letting them be next to each other and co-exist, also crush and change, affect each other – that goes very much in line with what thinkers like Donna Haraway describe when speaking about entanglement and how we are constantly changed by encounters.

Valentinas Klimašauskas: To be clear, the installation “Saules Suns” is in no way connected to environmental activism. What it meant to activate is one’s imagination about abstract, symbolic, imaginary, alien, Sci-Fi, cosmological, nano, macro and various other environments. If the installation is to be seen as environmental commentary, I’d widen up the understanding of “environmental” into “ecological”. Daiga Grantina uses “synthetic” and “organic” materials that – as rather cheap and widely available everyday materials – are spread throughout the world due to human activity and thus also describe the age we are living in. In the context of deep ecology there is no big difference between “natural” and “man-made” as plastic and humans are also a part, a very active part, as we all know it now, of our global environment, of the whole globe as nature. I am not sure this was the artist’s goal but there is a way to see the installation in the light of our new frighteningly changing world in which the synthetics (for example, plastics) are already widely distributed from deepest ocean floors to fish and sea mammals. Thus, maybe the most interesting and at the same time the most positive environmental interpretation would be to see the installation as a landscape of the new world or a new cosmogony to come in which there will be no clear divisions between natural and artificial, human and nonhuman, inside or outside. If needed an example, our “human” inner life, our subconsciousness is one of those places. Looking at the current state of the world it seems that humans externalized and projected their psyche onto the world. And this is what artists do, by the way, most of the time, right?

So, pardon the art speak, but sort of like a proto-abstract post-anthropocene pavilion?

VK: Yes, it’s a rather strange combination of keywords, however, it sounds quite right, no? [smiling]. The installation may be seen as an exercise to reenter modernism(s) via post-anthropocene threshold as some sort of a method of entering the contemporaneity via some (proto)modernisms. 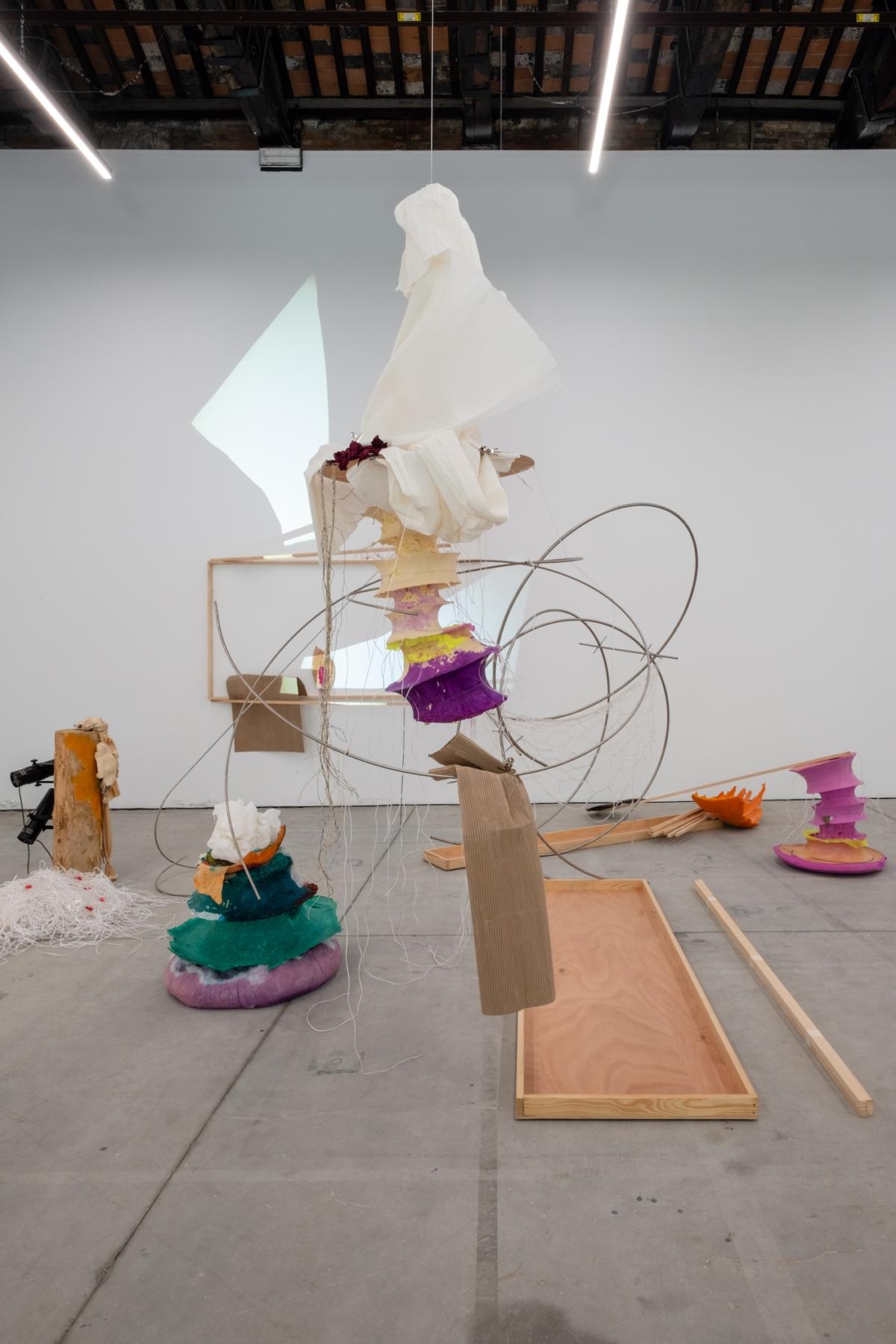 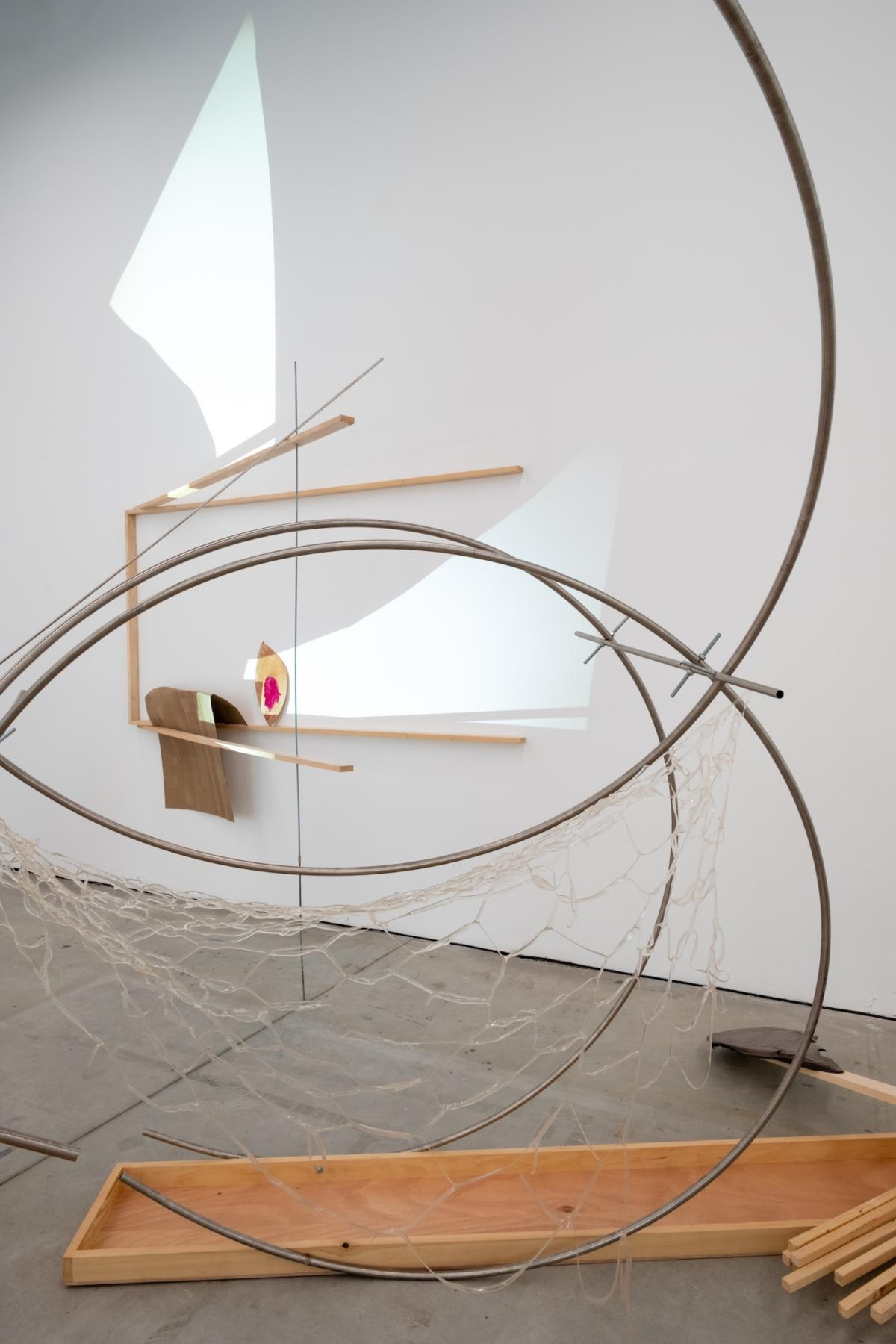 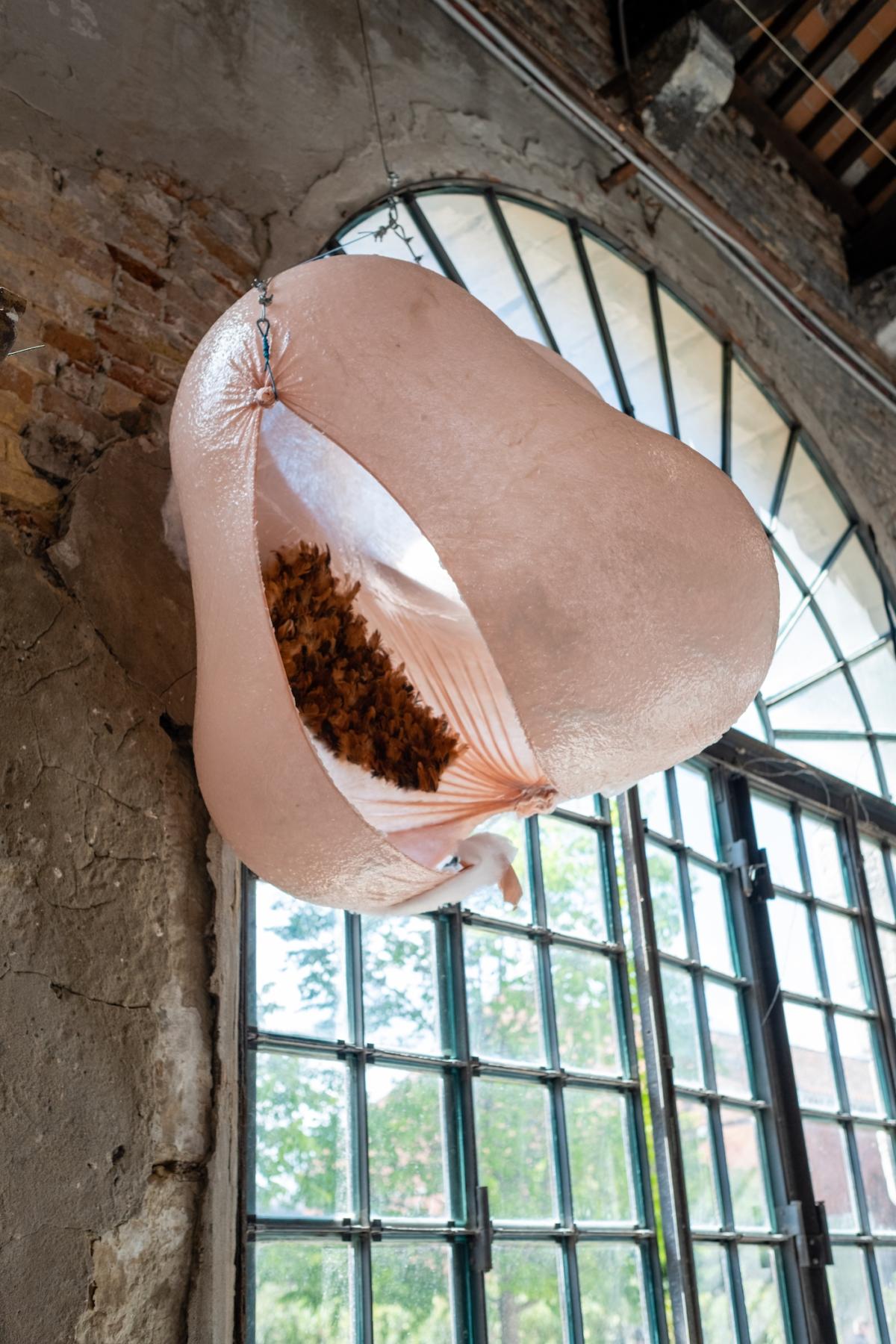 If the materials could speak, what do you think they would say?

IL: I would love to hear material stories of meetings, how does it feel when the plastic encounters linen and they are supposed to become one object, when colors are injected in their bodies. I feel there could be series of very sensuous stories, I’d be happy if someone would write them.

But also in my text I already wrote about the sensitive houses of J. G. Ballard in relation to Daiga Grantina’s installation. The houses are made from smart materials that reflect back the feelings injected to them by people who are living there, so affection is answered by affection, and anger could be mirrored by counter-anger or fear.

The skyrocketing installation costs in Venice and rivalry of national competitions in no way help solving artistic or environmental problems. There were opinions voiced before and I completely agree with them that the future model of Venice Biennial should be cooperation and sharing of resources instead of rivalry.

VK: I’m answering questions after visiting a dentist with my tongue being numb with anaesthetics, thus it feels like for the first time I understand what does it mean to be a material and a subject at the same time. Even more, thinking about the installation it feels like my brain is an open mouth, however, it is still “chewing” on or mediating some proto-thoughts, trying to radiate some ideas instead of formulating finalised shapes and meanings. A good example of it would be singing or whistling an abstract song rather than writing down a finished poem.

Were there any exhibitions or projects that served as a precursor for either of you?

IL: For Daiga the legacy of pioneering female artists like Lynda Benglis and Eva Hesse is very important. As a younger generation artist she was invited to take part in the Bergen Assembly 2016 that was entirely devoted to Benglis and exploring her work. She is adding light and interacting with space consciously, we dismantled the wall in Venice to get the natural light interacting with artificial light projections, as well as to “touch” the wall of historical Arsenale.

I had collaborated with Daiga before on the exhibition ‘Akademia: Performing Life’ in Paris, Villa Vassilieff and later in the ‘Portable Labdscapes’ in Riga, where she created a work referring to the Akademia – a commune of artists and dancers following Ancient Greece and natural living ideals in the centre of Paris. One of the main organizers there was a Latvian emigré Aia Bertrand and we spoke a lot with Daiga about the role of the women in the communes, about emigration and multiple homelands and ideas of natural living and what would that mean in the urban context, as well as myths. 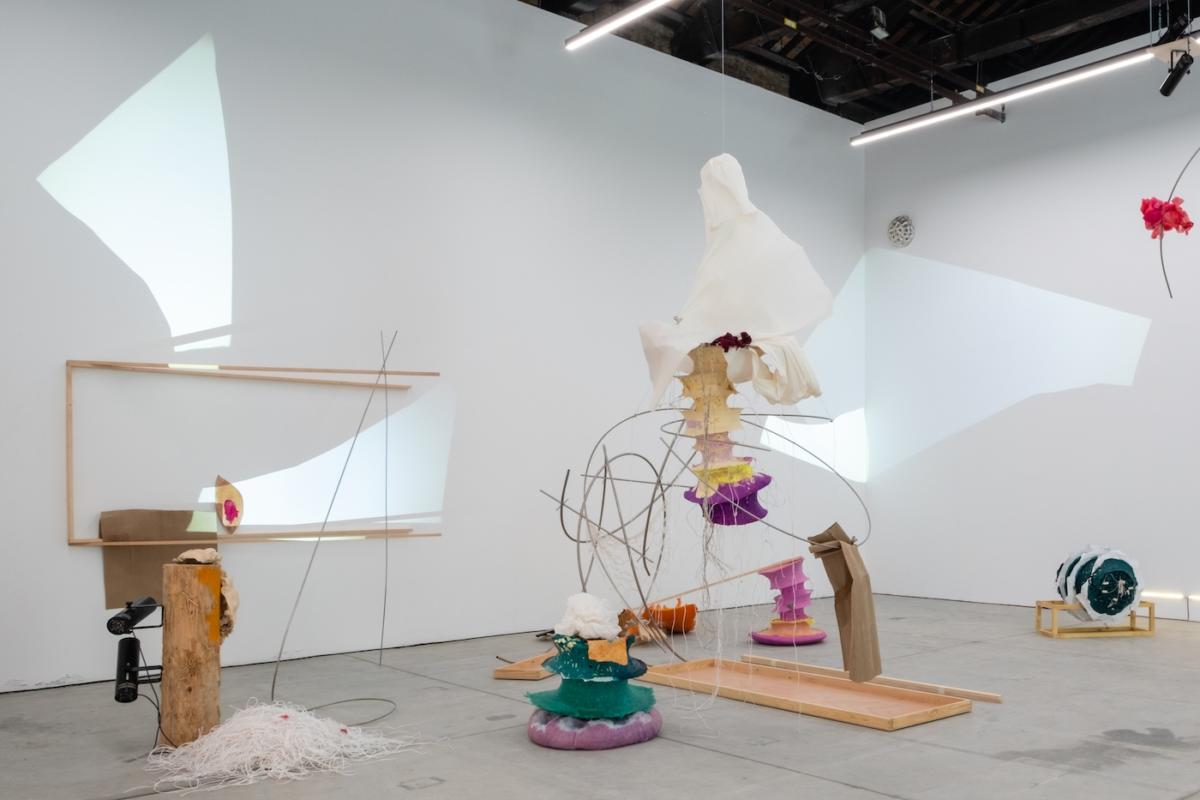 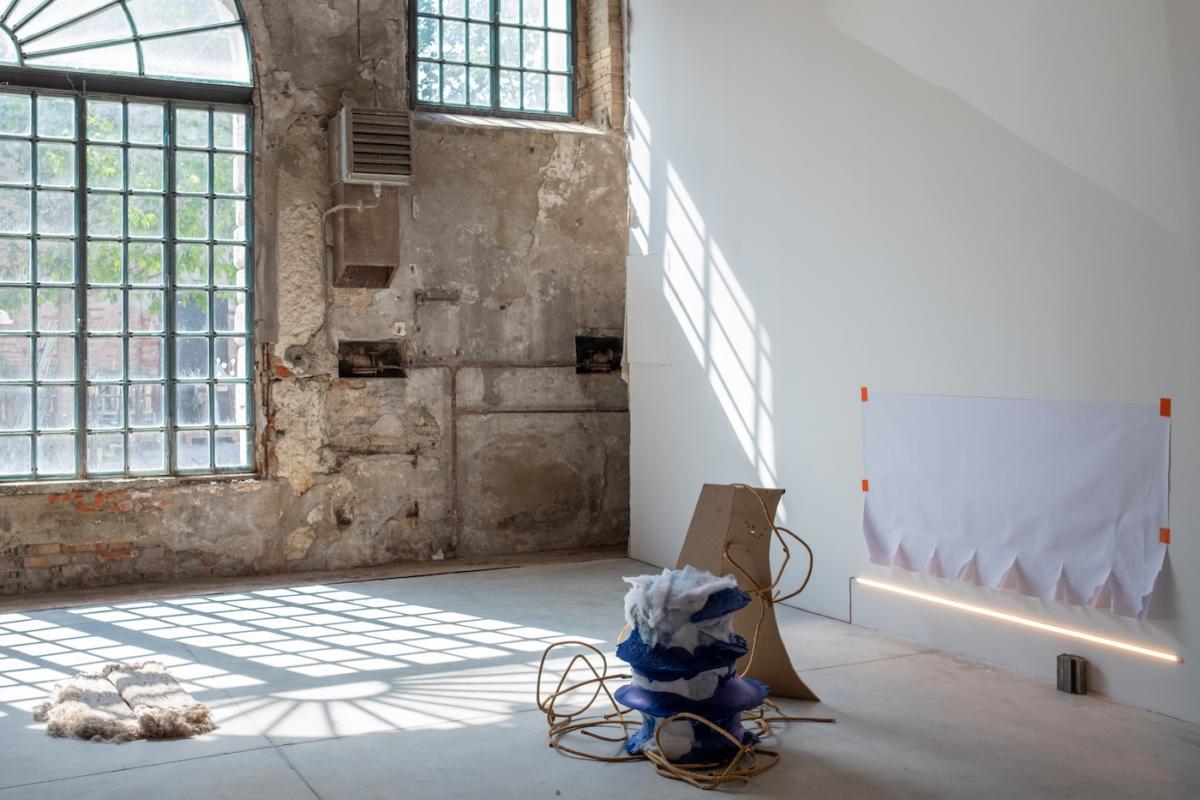 DB: I heard (through the grapevine) that you both approached Daiga Grantina and that she, in turn, suggested a curatorial collaboration between you two. What’s the back-story here?

VK: Collaborations, one may say – unlikely collaborations became part of the project since the beginning. At the time I was a program director at Kim? Contemporary Art Centre and Inga was curator at the Latvian Center for Contemporary Arts, two rival institutions fighting for the resources and the attention of audiences thus, to be sincere, when we started the collaboration seemed a bit ungrounded, even for me, although we shared with Inga common visions and critique of the local scene, also worked on a publication together. However, participating in Venice biennial is about pulling up all intellectual, organizational and other resources. The skyrocketing installation costs in Venice and rivalry of national competitions in no way help solving artistic or environmental problems. There were opinions voiced before and I completely agree with them that the future model of Venice Biennial should be cooperation and sharing of resources instead of rivalry. Knowing how fragile Venice as a marine and urban ecology is, this model should help to survive not only for the biennial but also for the whole archipelago. And for now the feeling is that it is all sinking into some kind of decadent symbolism which stands for resolute irresponsibility of the Antropocene. Maybe this could serve as another background in which we may reinterpret a rather minimalist and abstract “Saules Suns” [smiling].

IL: To enter into the details of the whole venture, we did both approach Daiga and instead of choosing one of us she decided to unite us as two curators in the team, as well as unite the two institutions (because as Valentinas mentions we were at the time representing each another one). It worked out well practically and helped the two institutions to make their relationships better, to understand each other’s strengths and working methodologies, as well as really understand and value the difference of collaboration networks for example, and also share them. It was also a beautiful gesture metaphorically talking about the younger generation in our countries which is more international and mobile and instead of dividing local territories is more thinking about collaboration and sharing resources. Which of course, is a kind of a weird antidote ot the actual situation in Venice, as well as in the art world in general where there are still too many precarious people fighting for too few opportunities. And individualism is also still a huge thing.

How did your collective ideas synthesize? What did the actual process of collaboration manifest like?

VK: It’s just about communication and work, no? Inga?

IL: Yes, the communication is key, writing and rewriting each other’s thoughts and texts in the shared google documents until you forget whose thought was it initially, that was sort of the beginning, also sharing a lot of references, interests and passions, but also pictures from our everyday lives. And then further in the process we would also divide and share a lot of practical responsibilities. 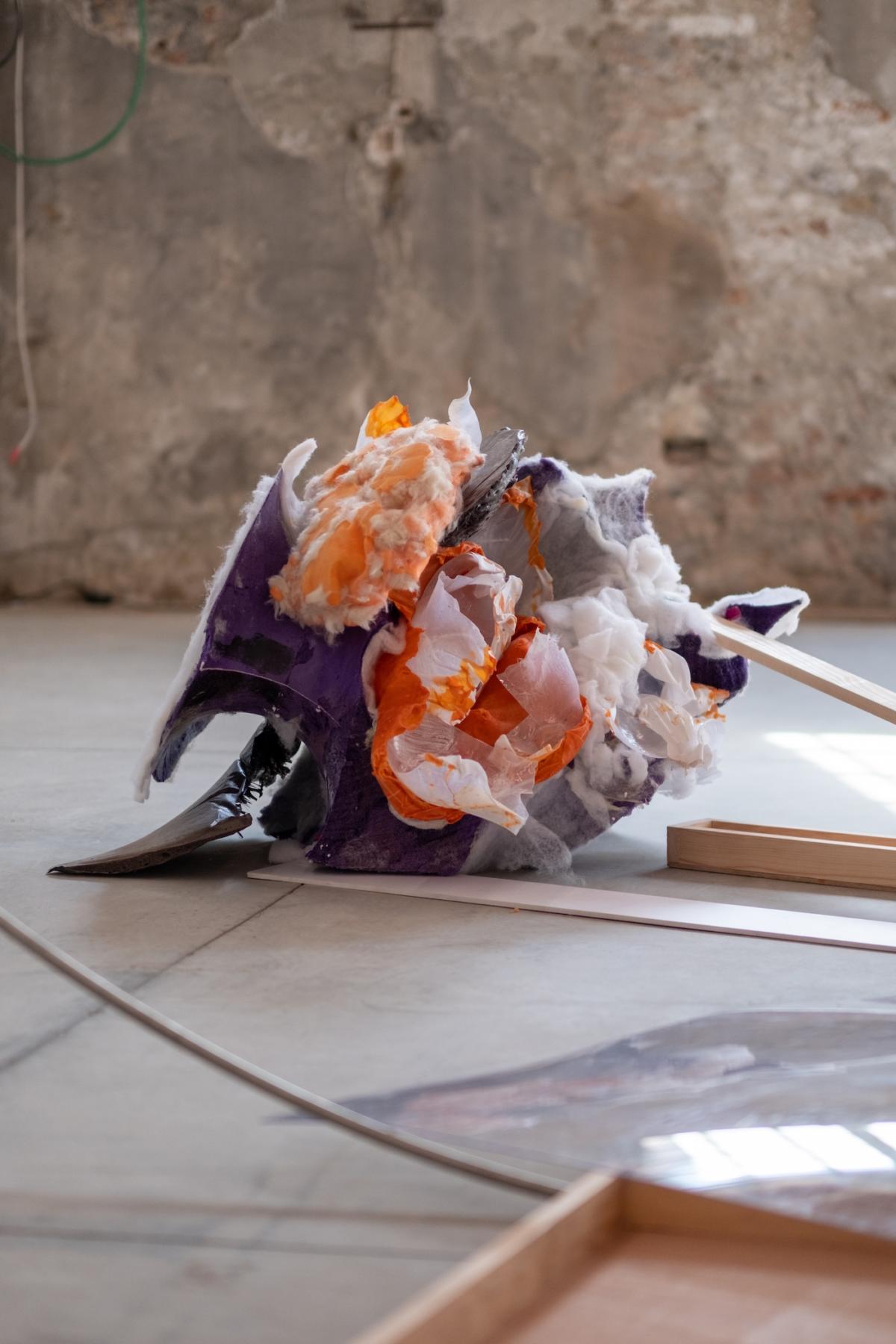 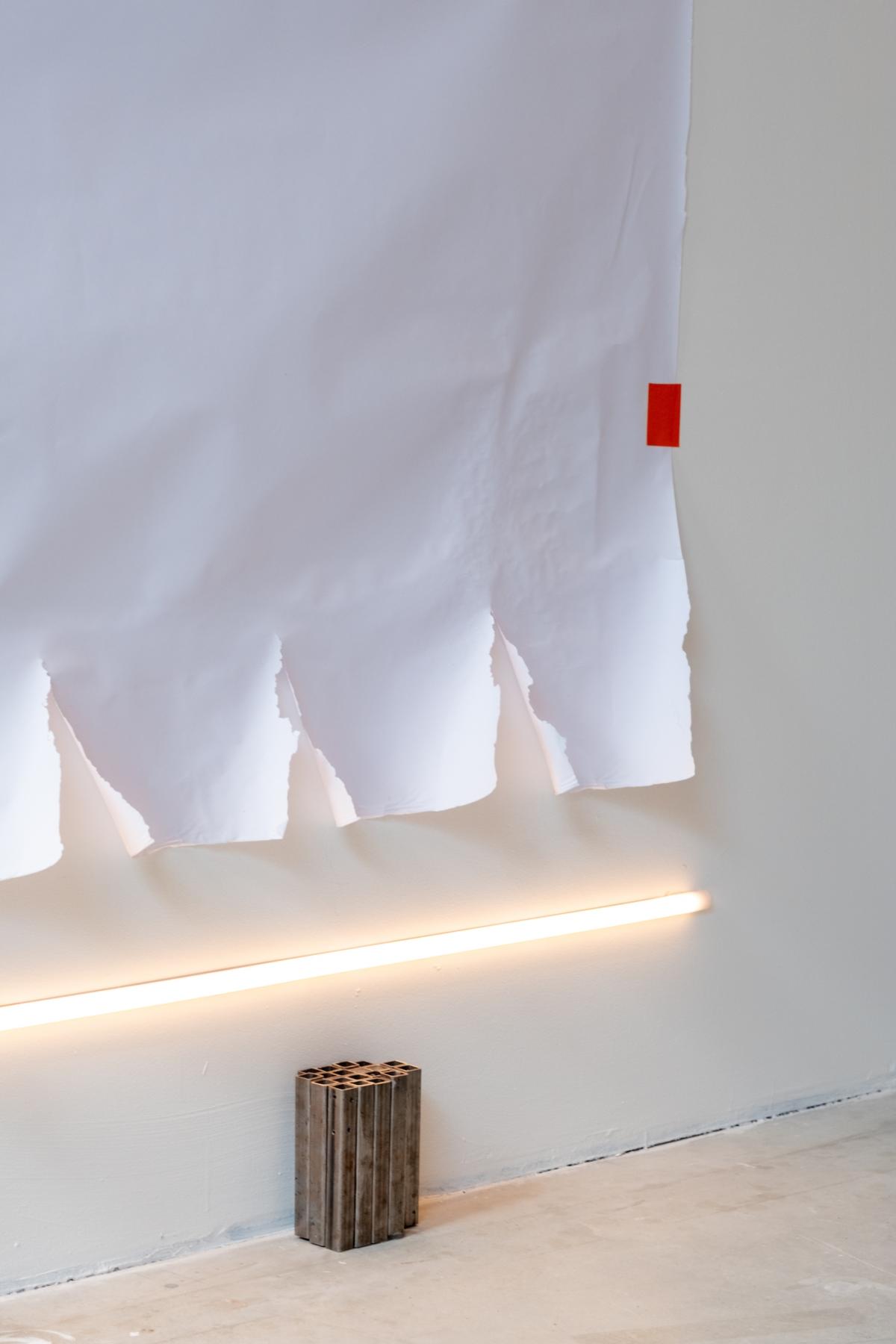 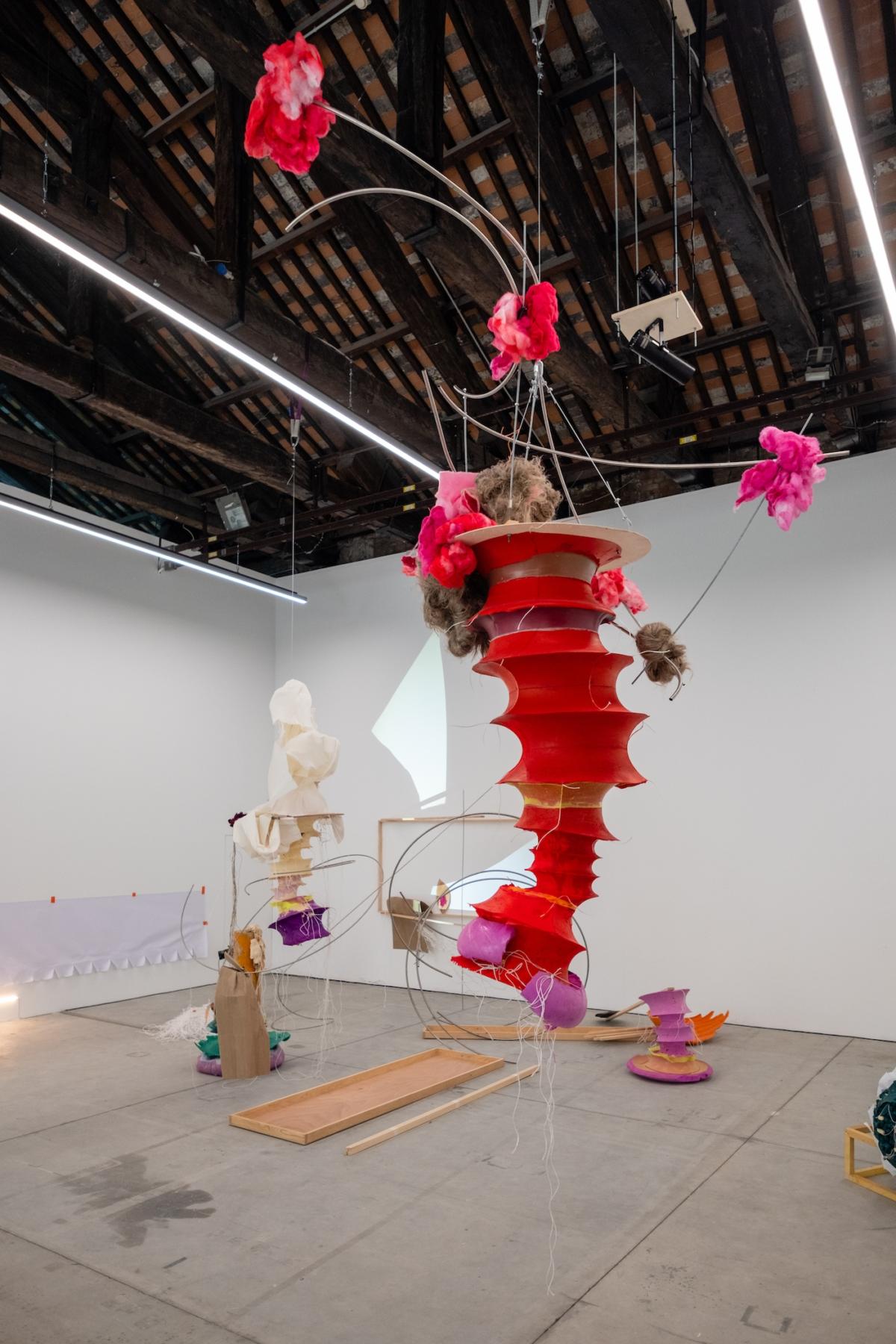 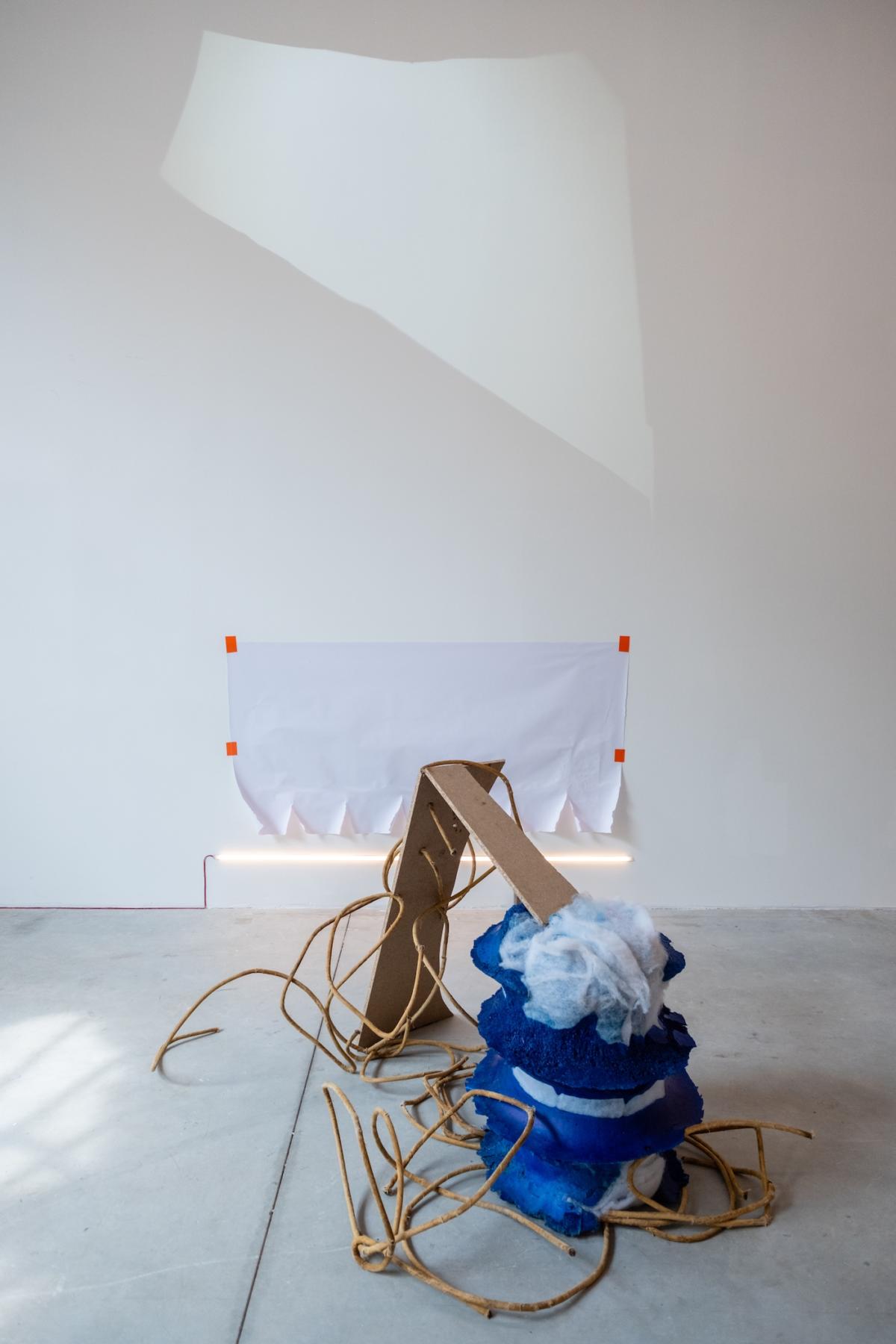 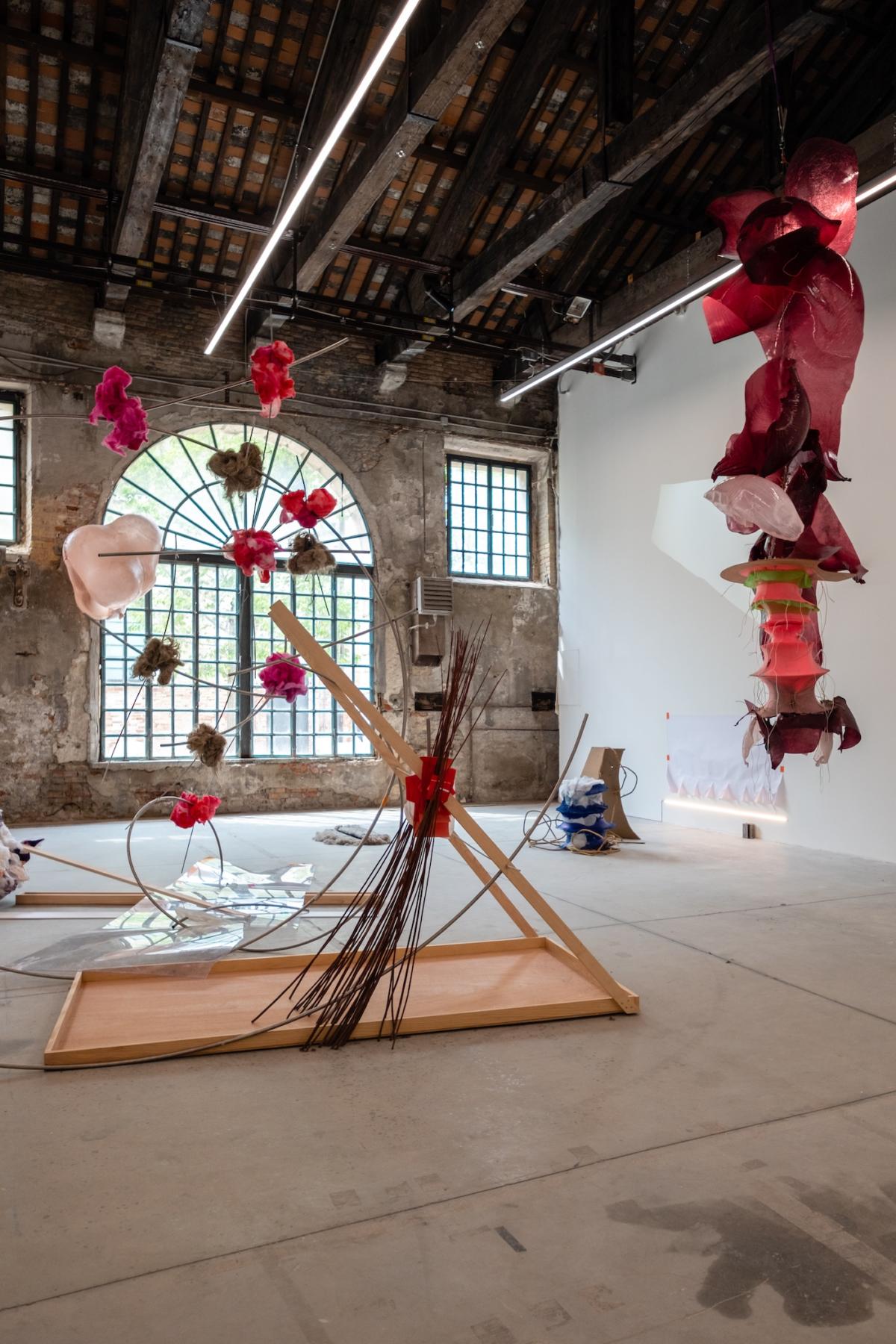 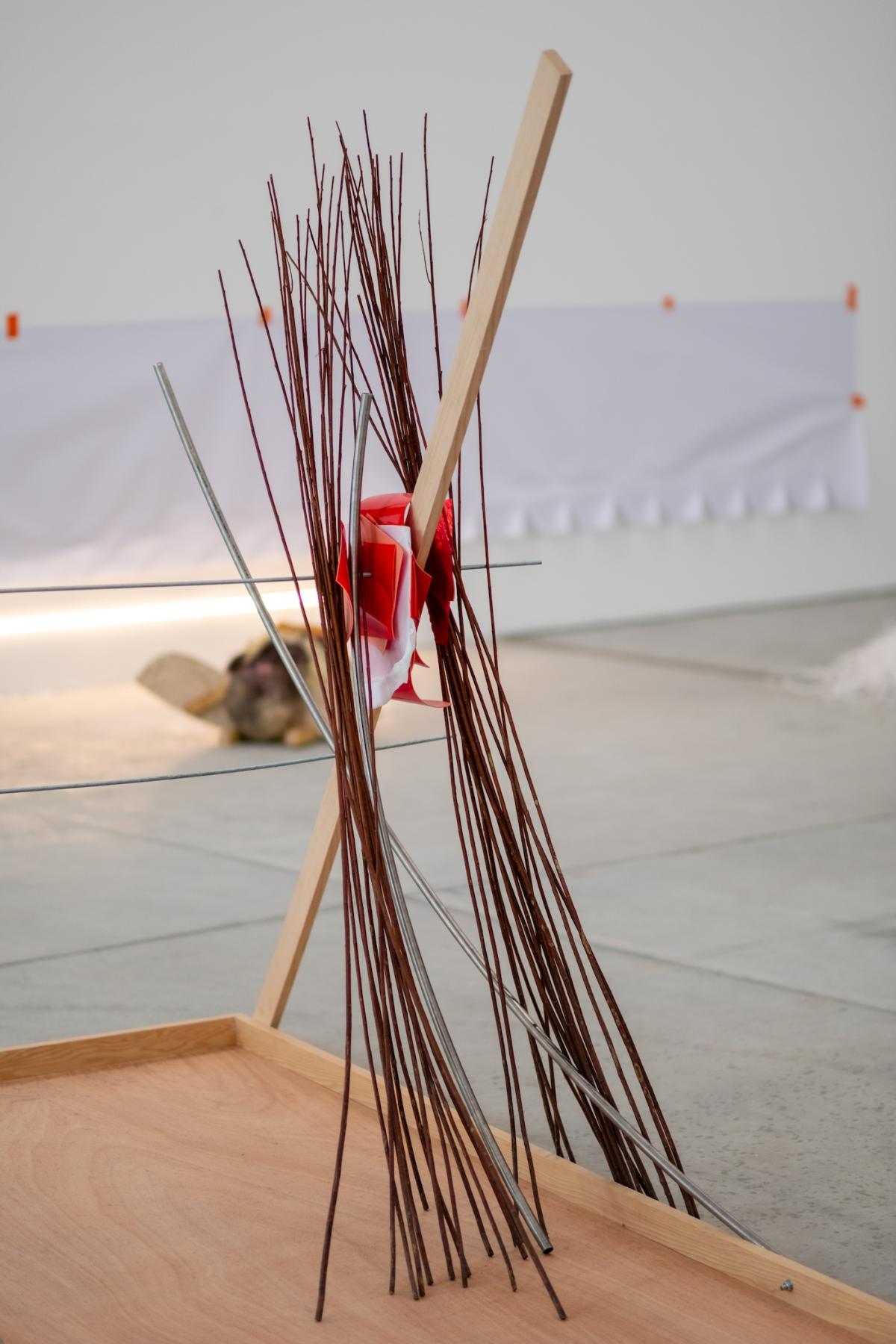 DB: Latvia has been participating in the Venice Biennale since 1999. How important do you feel Venice is, not only for Latvia, but for post-Soviet republics more generally?

VK:  It would be difficult to comment on the whole post-Soviet space as only a few of the countries have pavilions at the Venice Biennial on constant basis, however, in my opinion the Biennial is some kind of reality check for the Baltic countries. With its freshly shining and well deserved Golden Lion and a few special mentions, Lithuanian contemporary art community is using its international achievements as some kind of leverage to fundraise resources that are always lacking and claim for its significance for the general public.

IL: Even though it seems like a given that Latvia is taking part in the Venice Biennale, it is worth remembering that it is still a young country and the systems that are in place elsewhere for years are still fragile here. For instance, there was a year when because of a populist minister of culture the whole participation was cancelled a couple of months before the opening. Thus on the background of another nationally conservative minister of culture replacing a more liberal one, I think it is important to remember what this participation means. So, from a more critical inside-the-art-world point of view we should criticize and try to challenge the national representations where the whole venture and how for instance countries like Kurdistan or Palestine cannot take part, unless deemed collateral events, and how obsolete national representations are, on the local culturally political level, there is a different discussion. And in that discussion the participation means taking part in an event where we represent ourselves with other countries on an international scale as a contemporary nation. And also there is a constant discussion who can represent Latvia, who is Latvian enough, is an artist who lives in Paris “Latvian enough”, thus I think this is still a sort of a thing to be opened up in the Latvian context. For the other Post-Socialist countries – as Valentinas mentions it is very diverse, but what is uniting is that usually they are not represented in Giardini, but either in Arsenale our outside, and have objectively smaller budgets, which affect visibility, of course. Some take part sporadically, also representing the shifting cultural politics locally. But for sure it is more realistic to have young people taking part and being curators, which is a positive thing, in the countries where the contemporary art scenes are still relatively fresh.