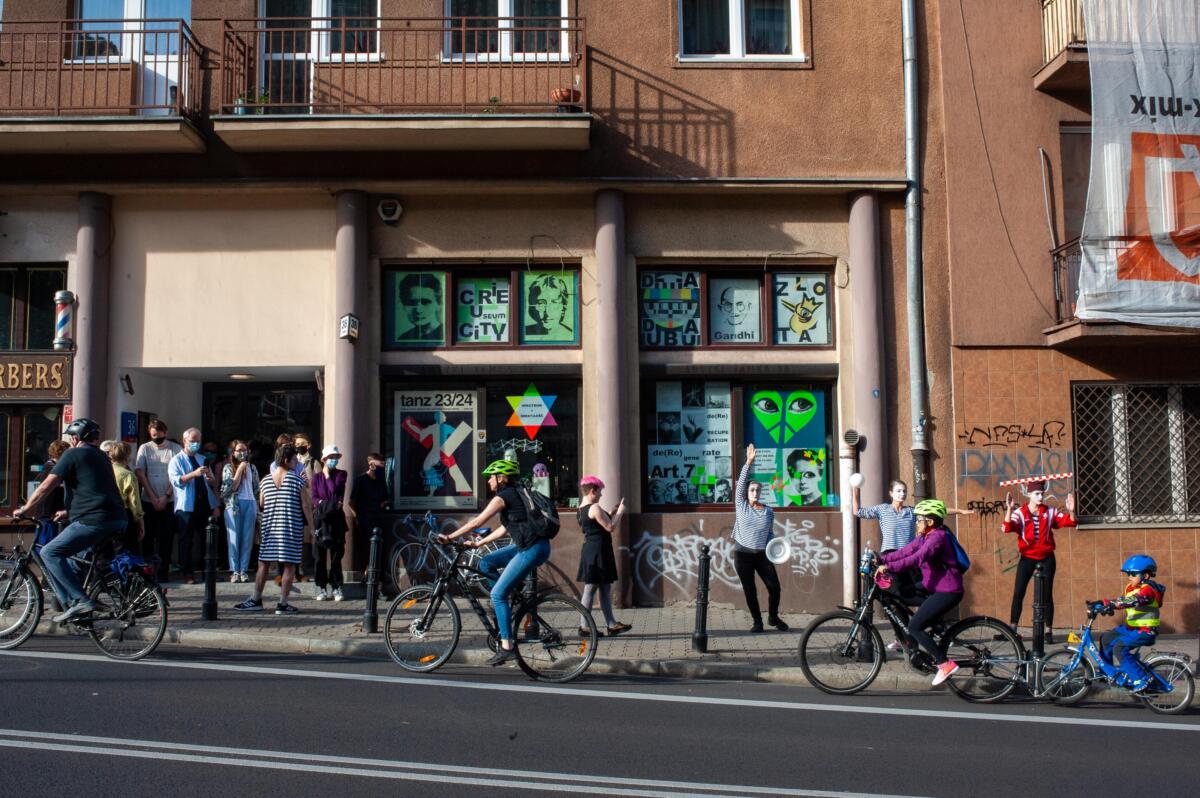 For long-term collaborator Edka Jarząb, finding Curie City was like a homecoming: an intimate atmosphere from which to meet and talk, to experiment and to inspire, where visitors were encouraged to bring a fruit, a friend, or a book. I found Curie City, an experimental incubator first hosted through the Warsaw Bauhaus Foundation in 2016, when it was housed just across from the Palace of Culture and Science on Aleje Jerozolimskie. Despite being a complete stranger, I was invited into the liminal space – a former butcher shop complete with the typical sanitary-style white tiles and mirror still clinging to the walls – like an old friend, by both Joanna and Wojtek, where they told me about the project, the collaborations, ideas, and hopes for Curie City. Since then the community has seen some changes, including a physical move to Powiśle (now housed along ul. Tamka) and a program that is now functioning ‘in exile’ because of the ongoing pandemic. What remains is its enigmatic aura and infectious energy which radiates from anyone who has ever been a part of this community, as well as it’s almost clandestine existence on the periphery of a shifting cultural landscape. Putting a finger on exactly what Curie City is, or how it maintains this spirit is almost antithetical to its entity, and the critical role that it plays in the contemporary art community of Warsaw.

In a recent conversation with co-founder Joanna Klass, which was like a gentile storm of an almost without pause free-flow of ideas and thoughts, Klass unfolded about some of the collaborations and projects that have sprung from Curie City, some wisdoms about how one flourishes in such an environment, as well as some of her personal history, which has proved to be somewhat of a reciprocal shaping. The one note that resounded clearly through this, and every conversation in connection with this space is its blanket openness and support for all things experimental, fringe, exploratory, risky, and unknown, anything with a need or urge to be brought to life. This spirit of community, or welcome, is the defining feature of this organism. It has been described as a para-site, a para-institution, that exists at the intersection of different places, practices, disciplines, and personalities, a strategy for exploring reality. But the paradox that exists here is that while it is fully publicly accessible (barring lockdown) it actually functions more like a well-kept secret – that is somehow not whispered among friends and collaborators, but extolled for all who will stop to listen. According to Klass, Curie City, who’s name is derived from the pioneer of radioactivity, physicist and chemist Marie Skłodowska-Curie, was borne out of being an outsider, it was a response to a lack (Klass here referred to the Woman’s Building in LA, a venue headed by Judy Chicago that was created by and for women in response to patriarchal exclusion and dominance in the American art world of the 1970’s[1]). Klass also cites formal inspiration from trailblazers like Ana Mendieta, John Cage, Witkacy, Susan Sontag and scientist Rosalind Franklin. For Klass, there’s also a beautiful little linguistic play in the name Curie, somehow relating to the notions of curiosity and cure: a simultaneous questioning and a solution. She also likened Curie City to what she calls a useum: a fluid, evolving home for independent ideas which sits squarely in opposition to the more traditional format of a museum. For the Curie City collective, the useum is relevant to when and where we are, it evolves and changes dependent on the artists/people that work within its structure, it is a continuous process where everything can be recycled, citing inspirations like Black Mountain College and Rrose Sélavy. Klass also noted the need for eco diversity: institutions, museums, collectives and non-spaces are all critical to the cultural landscape. Each occupying a different role, providing a different service, supporting distinct and overlapping needs, led by fearless people who push against the flattening and reductivism that tends to happen when we homogenize, generalize, and strictly institutionalize. Positing the notion of more ECO / less EGO as a foundational principle of Curie City, Klass suggests that it has to be a living entity that closes the distance between the audience and curator/producer, and breaks from the canon of high art, noting its racist, classist, and restrictive historical roots. Their solution is a Fluxus ethos with a utopic, useum-centric philosophy. In the summer of 2020, these notions were brought to the fore most notably through the development of Queerie City. Curatorial collaborator Karolina Rospondek noted that Queerie City was a choice of enlightenment in dark times, it was a direct response to Polish President Andrzej Duda’s reference to the LGBTQIA+ community as “an ideology of evil”[2] during a mid-June campaign speech. It was a counter message that young people, marginalized people, all people, are safe in Curie City and have a space to speak and learn critically, experiment and exist, together. Grzegorz Jaremko initiated and curated the critical reading club which ran from July thru November and included writers like Sara Ahmed and Audre Lorde, with lectures by Miguel Gutierrez, Szymon Adamczak, Iwona Kurz, and others. Critical figures from the local queer community, whose work deals with social topics like racism, AIDS, inequality, climate change in the context of queerness, led conversations and opportunities to share and reflect on these times. In their debut announcement they proclaimed The Queerie City project will be open to anyone who is/feels queer, non-binary, or wants to learn more about queer culture. In our conversation, Klass noted that she would love to be able to end the Queerie City programming because it would mean it was no longer needed in the community. At Curie City, each project exists so long as there is need.

Prioritizing one-to-one, human engagement is something that is practiced here as much as it is proclaimed. When asked about a most memorable project, Klass recalled “Charquicán, 9/11 & resistance through performance art in Chile” – a performative evening and discussion held on September 11, 2020, with Maria Fernanda Videla and Sebastián Collado (moderated by Piotr Gruszczyński). The event was an invitation to reflect, in a telematic performance, on marginalized queer identities in the postcolonial context of Chilean racism and homophobic violence. “We ate a Chilean dish composed by a random organization of diverse ingredients “charquicán”, this is one of our most inclusive and queer dishes. While were preparing the food (simultaneously in Chile by Maria Fernanda and at Curie City by Karolina and Joanna), we talked about Chilean September 11th (commemoration of the 1973 military coup) and the reflections of Sebastián Collado regarding contemporary forms of violence in Chile against sexualized and racialized (so-called) minorities”[3]. When asked about what we might see from Curie City in 2021, both Klass and Rospondek noted that after a year + of pandemia, Curie City found their way around lockdown restrictions by showing art right in their windows. This new cycle of artist projects, Sins of Late Capitalism, premiered in mid-March with an installation of ‘pasteloza’[4] sculptures by Zuzanna Piętkowska, and will be followed by a series of politically-motivated, collectively-made postcards by Filip Kijowski. As well, an unveiling the idea of the future (M)USEUM of UTOPIA, an “asylum for independent ideas mixing memory and desire”[5] is scheduled for Earth Day (April 22). Klass also took this opportunity to refocus on their neighbors in Powiśle, specifically the women who have aged out of any kind of socially visible role in the community. How does this population of women find themselves in this environment, and in the realm of utopia, she asked? In capitalist countries across the globe, women experience a fading of relevance with age. When we stop working, there isn’t really a place to tell our stories. In Poland specifically, there is a loss of the intergenerational family, and there is no real culture of engagement outside of the church, to fill this void. The suggestion of a festival of storytelling and a fashion show of redesigned secondhand clothing featuring community members, dancers and performers, was cast into the ether. Rospondek mentioned door to door, grass-roots canvassing to ask about what their neighbors needed from artists, be it practical, speculative, or frivolous, or anything in-between. While there is a hyper-local focus, Curie City also has a robust international community that regularly contributes to its shaping. Within this, there is a renewed call to the regional international community, with a desire to establish more collaborations with artists from Eastern Europe because there is very simply a need for  more voices to be represented (ie Belarus, Chechnya, etc). Rospondek noted that as an artistic community in general there needs to be more emphasis on Eastern Europe politically and socially, and that Curie City is a community in solidarity. As they are not publicly funded, there are more opportunities for amplification. She cites here a 2020 evening of anti-fascist performances which began at Curie City with a lecture about the anti-fascist art of Berlin in the 1920s by Dr. Samuel Dolbear and Esther Leslie,  accompanied by the “Exhibition of De(re)generated Art” featuring meditation on the works of artists “expelled” from the mainstream art salons in 1930s Germany mixed with contemporary references to present day Poland . The subsequent performances and concert took place at The Frederic Chopin University of Music (Warsaw), including “Tanz 23/24” by Alka Nauman and Lucie Palazot, which was a reconstruction of Henri Châtin-Hoffman’s choreography to music by Ernst Schoen performed by Samuel Draper (piano). In all circumstances, Klass encourages us not to stand up, but to dance. Both out of pleasure and for the need to be agile, for as we have seen already it can be difficult to anticipate which tempo will strajk next.

The utopian approach, the lack, the need to continually reinvent, is what Klass refers to as practiced naïveté, citing professionalism as a bit of a trap. An outsider by nature, cultivating the peripheral along whatever path she walks, Klass proclaims with a laugh “I would never join a club that would have me as a member.” This world requires us to be shapeshifters; to be liquid, dynamic, speed, tempo, texture, material – elements that are not cyclical but layered on top of one another, collapsing, spreading, commingling, inextricably linking. Rospondek notes that culture should not be yet another tool for segmenting people and again emphasizes the opportunity in the blur: if something is good, it can break through the different strata: education, socioeconomic, geographic, gender, it establishes an emotional connection that breaches all of the boxes and bridges us as humans. Whether it’s a parade through the streets of Warsaw or a fully-digital, COVID-inspired “off-fluxus scoring of video work cine poetry”, Curie City can happen anywhere. It is a proposition for engagement, an invitation, a sanctuary for ideas and practices that wish to happen. It is an opportunity to be a part of an evolution in the space that is offered, it is solid and it is liquid. As Klass noted finally, “we created a context”, which is an open call for all who can hear it.

[2] The “ideology of evil” was appropriated by President Duda from the annals of Pope John Paul II, who used it to describe communism, not the queer community.

[3] As described by Karolina Rospondek

[5] Here Klass quotes her favorite writer Oscar Wilde, “A map of the world that does not include Utopia is not worth even glancing at, for it leaves out the one country at which Humanity is always landing. And when Humanity lands there, it looks out, and, seeing a better country, sets sail. Progress is the realization of Utopias.”

We talked to fellow feminists from Ukraine about military aid, here’s what they told us.

Not all criticism is Russophobic: on decolonial approach to Russian culture.