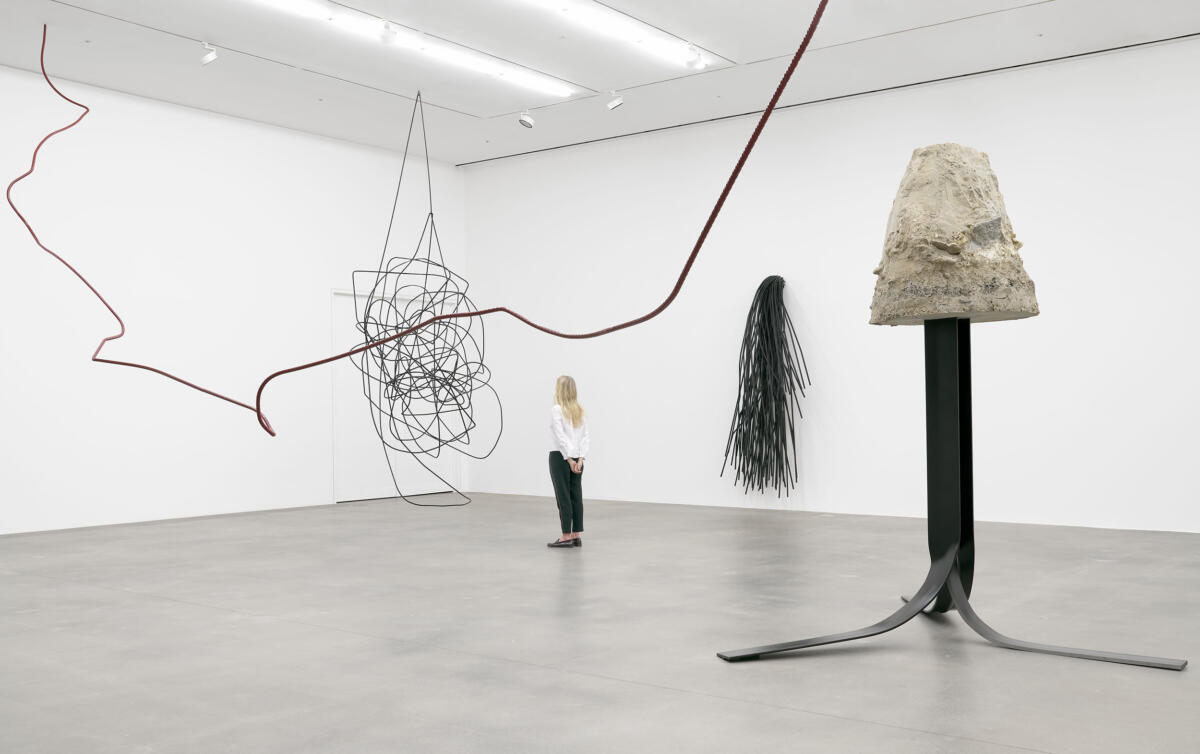 ‘It didn’t so much as budge for a few days. Even when it was hit with an excavator that weighed 20 tonnes and jumped on each impact’[1] — this is how Monika Sosnowska recalls her work on Exercises in Construction. Bending — a twenty-metre, seven-tonne structure, which she showed at the Garage, Museum of Contemporary Art in Moscow (31 January–30 July 2020).[2] Work on bending the steel structure took place on the site of a former Soviet kolkhoz where milk was once produced and which today houses an architectural studio and a locksmith’s workshop. Sosnowska’s structure is a 1 : 1 scale copy of the top of the hyperboloid radio tower designed for Moscow’s Shabolovka Street by engineer Vladimir Grigoryevich Shukhov (1853–1939). As a result of many days’ work with heavy construction equipment, the tower fragment was finally bent in half. The material surrendered to fatigue. The seemingly insurmountable structure finally capitulated. In January 2020, it was transported to Moscow and squeezed into the Garage atrium.

Resembling steel cobwebs, and at the same time characterised by great strength, Shukhov’s towers are the object of the latest and deep fascination of the Polish artist, who gained fame for transforming elements of Polish and international architectural modernism into sculptures perversely questioning rationalism, functionalism, architectural tectonics — transparency and logic of the composition of buildings — and the nature of modern materials, such as concrete or steel. After being inspired by Polish socialist modernism and its ruins, blocks of flats, house factories and stalls left over from Warsaw’s 10th Anniversary Stadium, as well as the international style of Bauhaus, De Stijl and Chicago’s Ludwig Mies van der Rohe, Sosnowska turned to the Eastern European and South Asian version of modernism. Recent artistic journeys to Moscow enabled her to refresh her view of Konstantin Melnikov’s and El Lissitzky’s constructivism and Le Corbusier’s architectural affair with the Soviet Union in 1928–1932, but also provided an opportunity to learn about the achievements of one of the most prominent representatives of world engineering architecture, Vladimir Shukhov.

The renaissance of Shukhov’s engineering — he was a pioneer of industrial constructions (including steel towers in the shape of a rotating hyperboloid or long-span steel lattice shells) — can be observed in the contemporary ‘Western’ history of architecture since the 1990s.[3] In the popular history of architecture of the 20th century, published in 2001, we can find a photograph of a lighthouse in Ukraine (1911),[4] one of many examples of the application of Shukhov’s universal openwork, steel hyperboloid structure in engineering architecture — as lighthouses, radio towers, water towers or transmission towers erected in the era of belief in revolutionary technological progress and building a new world for a new society. Let us add that in a 2001 study, Shukhov’s Ukrainian tower was inscribed in the Western European history of engineering architecture, alongside such 19th-century projects as Joseph Paxton’s Crystal Palace (1851), Victor Baltard’s and Félix Callet’s Les Halles market in Paris (1854–1857, 1860–1866) and the Eiffel Tower (1889).[5]

In 2005, an international group of engineers and architecture historians initiated research into Shukhov’s legacy in the Nizhny Novgorod region. It was there, at an exhibition in 1896, that the architect first presented a prototype of a lightweight, robust and easy to assemble hyperboloid-shaped tower. The method of tower assembly is today referred to as ‘telescopic’; Sosnowska compares it to building without cranes, using the ‘matryoshka’ principle.[6] This method involves lifting and welding round segments of structures with an ever smaller diameter.[7] In 2007, a team from Germany, Austria, Russia and Switzerland carried out research in the territory of the former USSR in order to inventory and develop principles of conservation of the preserved monuments of Shukhov’s engineering architecture.[8] As a result, a 2019 publication presents a list of 34 surviving hyperboloid towers designed by the architect — in Russia, Ukraine and Belarus, as well as in Uzbekistan, Armenia and Turkmenistan.[9] Based on archival research, it was also confirmed that 104 towers of various purposes were built in Russia before the 1940s according to the system he had proposed. 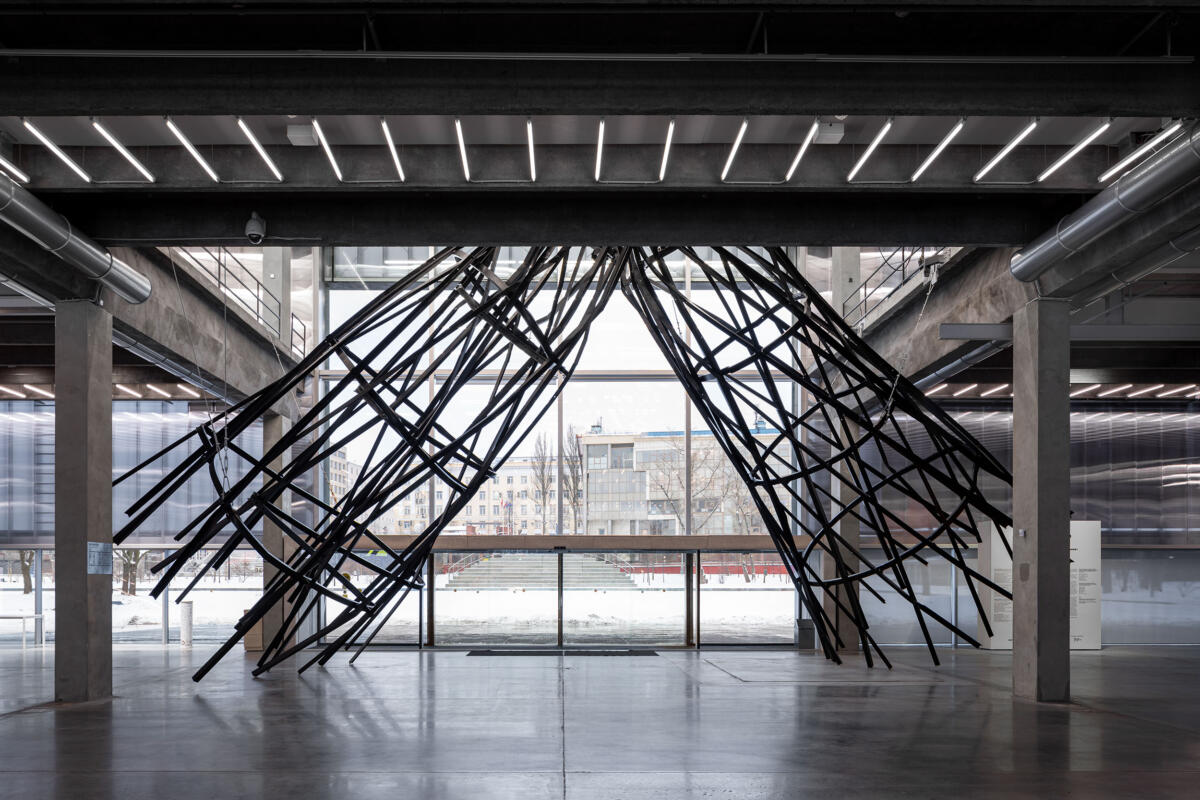 The breakthrough moment for international research on Shukhov’s engineering innovations came in 2014, when controversial decisions were made in the Russian Federation to demolish a 1000-foot Moscow radio tower on Shabolovka Street (1919–1922), often compared by architecture historians to Vladimir Tatlin’s design of the monument to the Third International (1919).[10] In February 2019, after the official announcement of the decision to demolish the tower, the international community of architects and architectural historians (including Norman Foster, Rem Koolhaas, Jean-Louis Cohen)[11] protested in defence of the world heritage of engineering architecture.

The exhibition dedicated to Shukhov, organised at Moscow’s Shchusev State Museum of Architecture (2019/2020), is a part of this international response. It presented both the vastness of the output of an outstanding constructor — not only the author of a prototype hyperboloid tower from 1896, but also a designer of bridges, industrial constructions, ironworks furnaces, elevators, factory chimneys, railway stations, shopping centres, or an innovator in the field of the oil industry — and the voices of the most important researchers of his engineering work collected in the exhibition catalogue.

Monika Sosnowska had previously shown several works inspired by the architect’s constructions at an exhibition at the Modern Institute in Glasgow (25 May–7 September 2019).[12] It contained the Cross Brace series (2019) — moulds suspended on walls, stretched to the limits of material strength. They were made of steel (weighing from 100 to 150 kilograms each) and looked like they were made of black rubber. Their excessive stretching was contrary to both the nature of the material and the properties of the structure — these are quotations from Shukhov, truss elements (cross-braces), whose proper task is to stiffen and strengthen the structure. In Glasgow, the artist also presented an openwork steel pylon. Its upper part was bent and broken, which made the whole structure resemble a tired, wilted stem. Another work, a fragment of the finial of one of Shukhov’s hyperboloid towers, looked like a schematic drawing of a multi-petal flower. Organic comparisons are not accidental here; the artist herself does not avoid them, and Still Life was the title of one of her exhibitions at the Foksal Gallery Foundation (27 November 2015–30 January 2016), referring to her fascination with the ruins of modernism and their organic character. 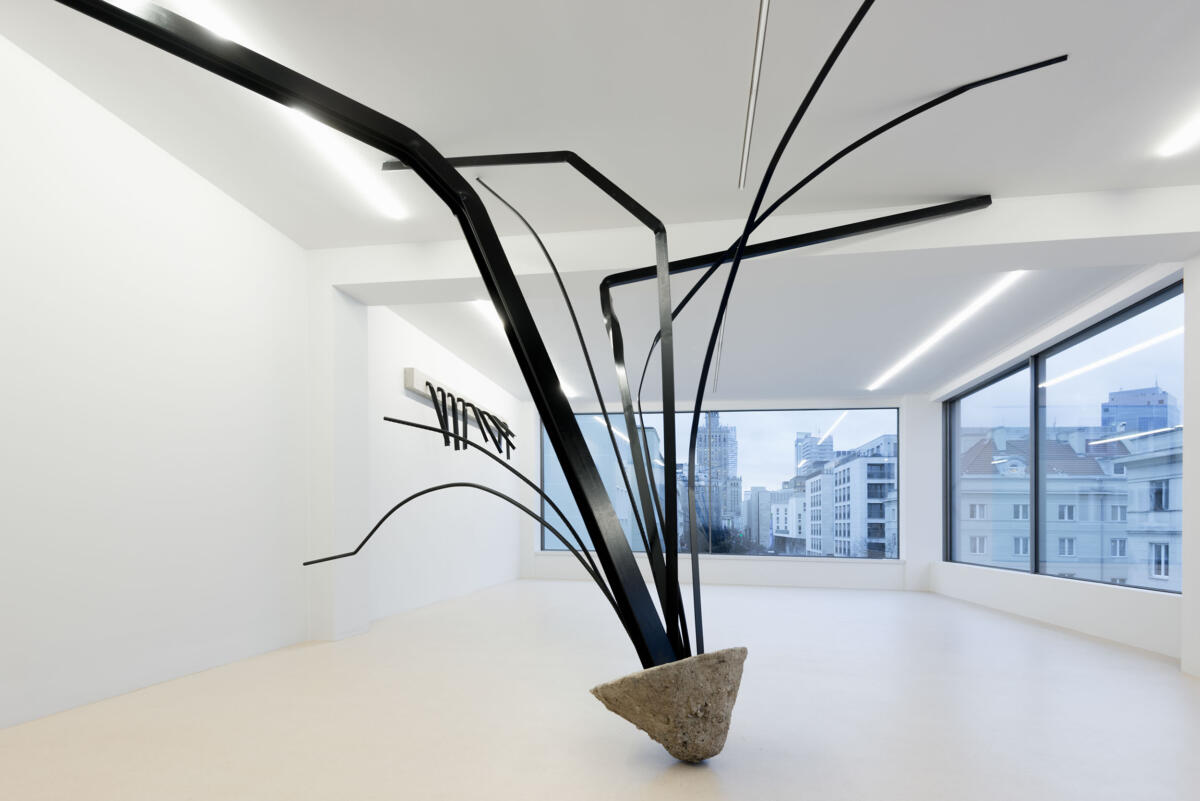 The Moscow Exercises in Construction. Bending and Monika Sosnowska’s realisations shown in Glasgow — her latest fascination with Shukhov’s engineering projects — should be seen as a continuation of her sculptural struggle with the matter and construction of modern architecture. After all, the common denominator for her many years of artistic activity remains the particular challenge that is subjecting to mechanical torture seemingly durable materials and stable structures designed by architects and engineers in the spirit of modern functionalism and architectural tectonics in such a way that they do not suffer fatigue, bend, or submit to unexpected pressures and tensions. Similar bending of the structure can be found in small sculptures, such as I-Beam or Angle Profile (2008), but also in monumental works, such as The Tower (2014), inspired by Lake Shore Drive Apartments, a Chicago project by Ludwig Mies van der Rohe.

Striking Vladimir Shukhov’s stable tower — a lacy, steel spider web weighing many tons — or stretching the truss elements of his design are not the only current aspects of Sosnowska’s work. Equally intriguing are her recent references to the (apparent) chaos of construction in South Asia. In February 2020, Monika Sosnowska presented her work as part of the Dhaka Art Summit, an art biennial in Bangladesh,[13] in a section referring to the work of Muzharul Islam (1923–2012), architect, urban planner, politician and social activist. Islam studied architecture at the University of Oregon, the Architectural Association in London and the Yale School of Architecture, where he met, among others, Louis Kahn and Paul Rudolph, whom he invited to create projects in Bangladesh.[14] It was thanks to Islam’s determination and political influence Kahn received one of his most important Asian commissions — the construction of the Bangladeshi Parliament in Dhaka. Construction began in 1964 as an assembly building for the capital of then-Eastern Pakistan; it was finally completed in 1982 after the establishment of Bangladesh (1971) and the death of Kahn (1974). Sosnowska’s sculpture Stairs (2020) refers to the building of the school of fine arts in Dhaka designed by Islam — an architect who introduced modernism to Bangladesh while at the same time giving it a local character. Sosnowska’s work presented in this city is a chaotic, non-functional form, a tangled rebar, on which, as if by chance, hang several steps of terrazzo stairs. 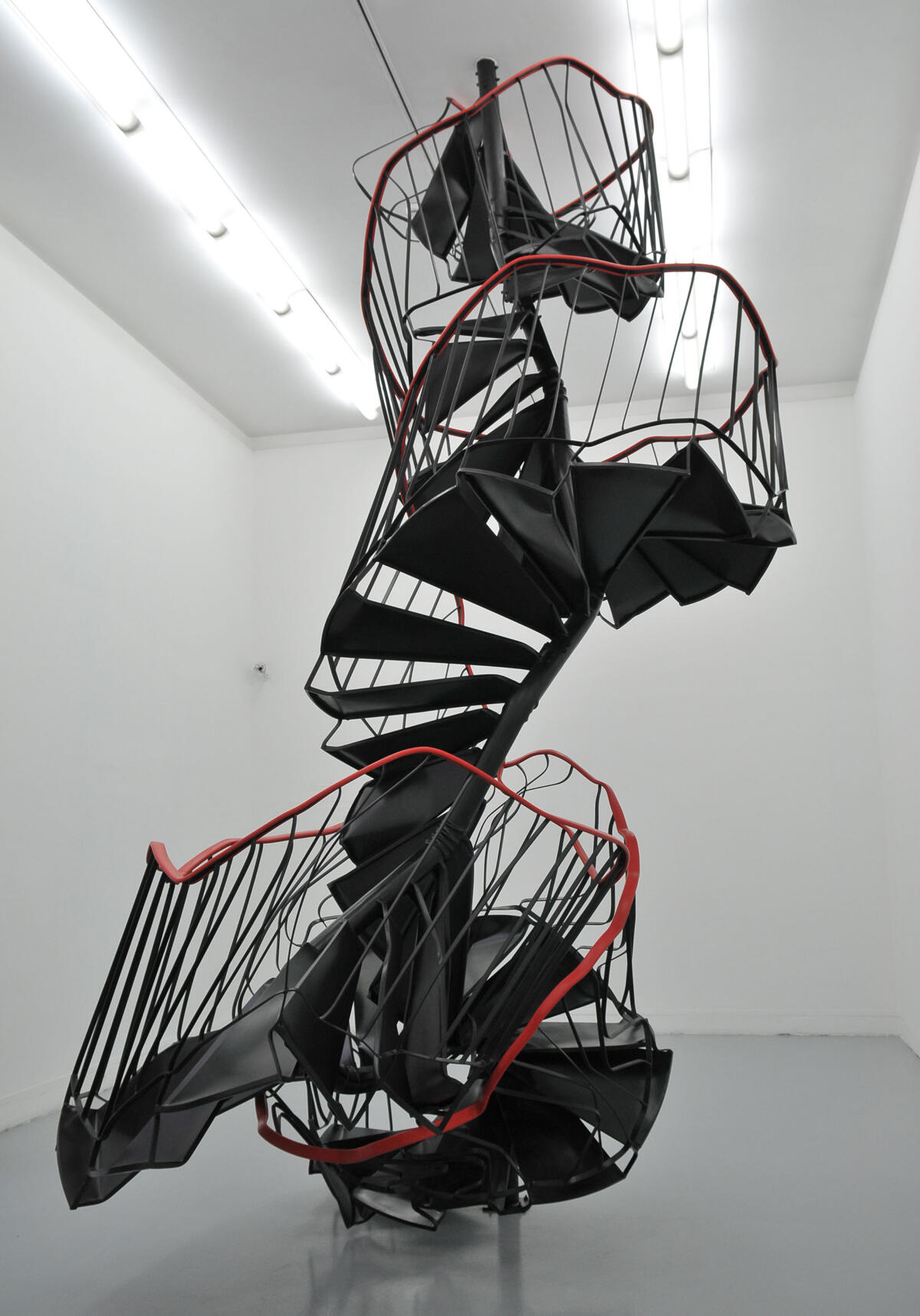 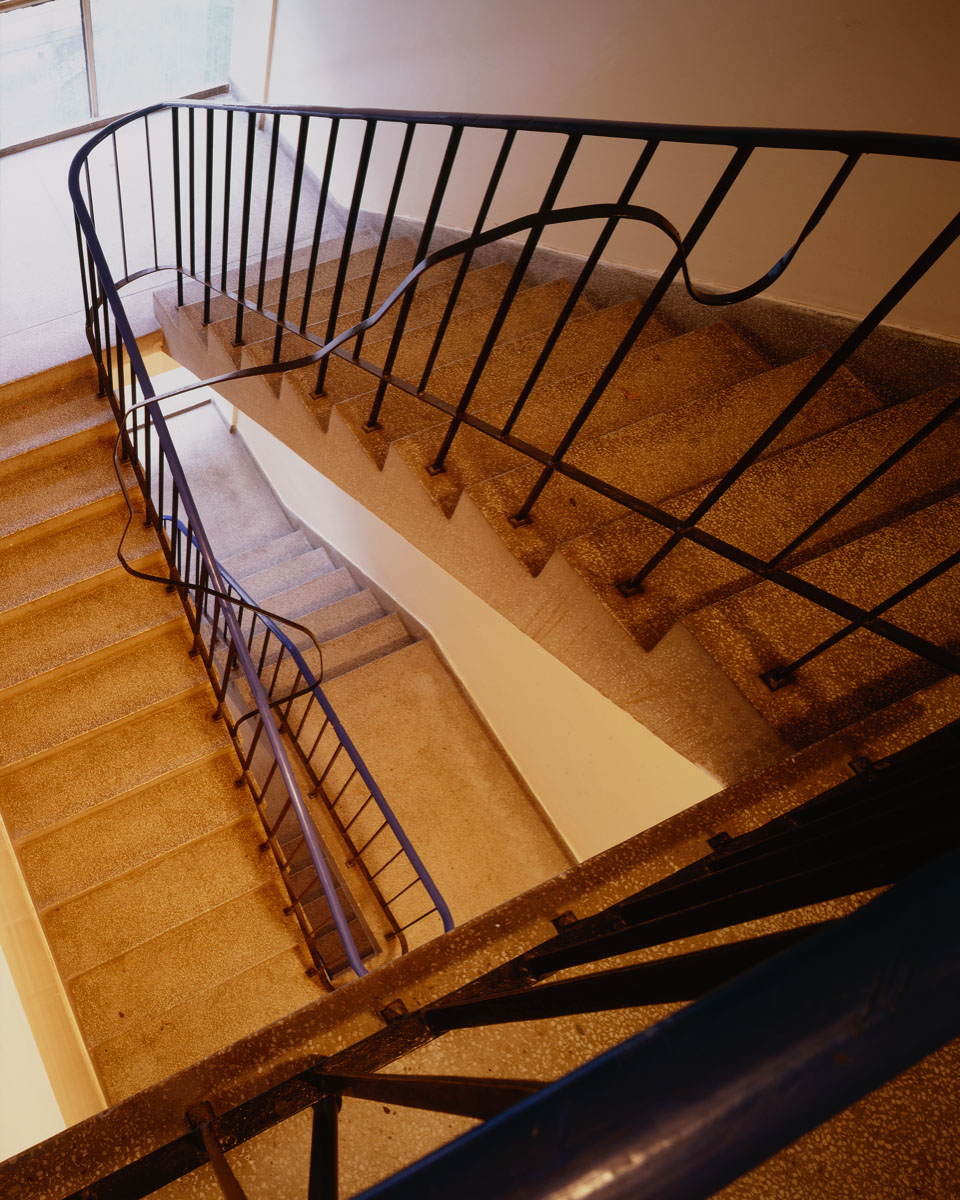 In the exhibition at Zachęta, the artist shows several new sculptures inspired by her artistic journeys to Bangladesh, during which she discovered not only modernism in its colonial and post-colonial versions, but also local construction practices. One of the images Sosnowska photographed are the banks of rivers flowing into the Bay of Bengal, from which workers manually recover the stones carried by the water, which are then processed into gravel and concrete. Others — buildings that look unfinished or already ruined; rebar protrudes from them, sometimes surrounded by bamboo scaffolding. The employment of many unskilled workers (at the insistence of local authorities) and wobbly bamboo scaffolding were also characteristic of the way the Dhaka parliament building was constructed in the 1960s and 1970s. Kahn designed it as a complex of simple blocks, cubes and cylinders, built partly of reinforced concrete (an expensive building material in Eastern Pakistan at the time) and partly of brick.[15] The clash of our European visions of modernism in architecture with the reality of South Asian construction is a theme that Monika Sosnowska marks in one of the rooms at the Zachęta exhibition as ‘madness’ seen during her trip to Bangladesh. The result of this ‘madness’ are four heavy rebar sculptures (Rebar 20; Rebar 16, Concrete; Rebar 20, Concretes; Rebar 20, 2020), some with pieces of concrete (like the sculpture shown as part of the Dhaka Art Summit), intended to look as if they had been torn out of the building and at the same time started to live their own lives — outside any structure. The tangle of rebar — one protruding from and entering the gallery walls, the others freely dancing in the middle of the exhibition room — no longer resembles any ‘logical’, geometric form of modernism. Rather, it reflects the vitality and organic nature of construction, falling into ruin and returning to life at the same time. 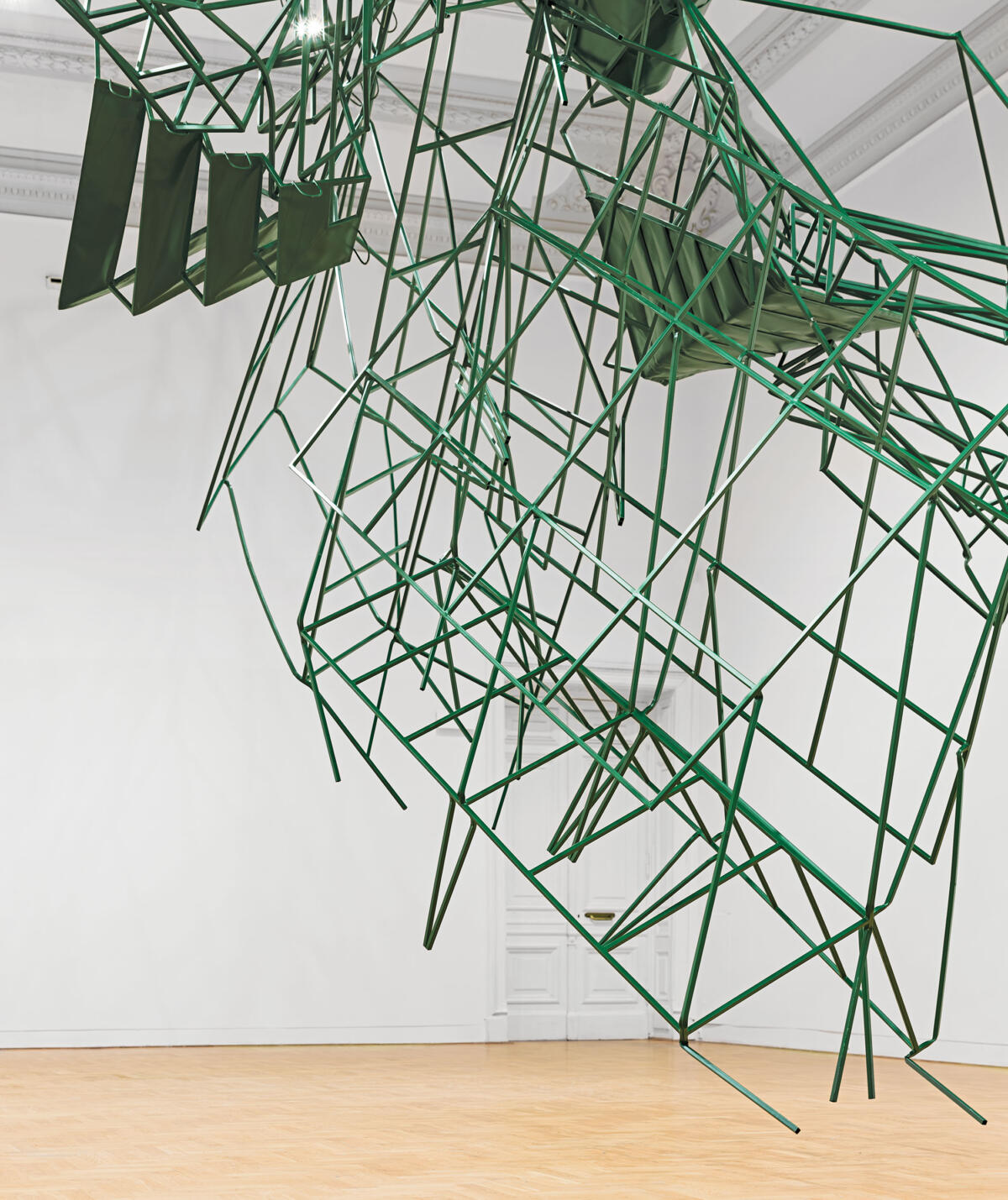 [1] Interview with Monika Sosnowska conducted on 9 January 2020 in Warsaw.

[2] On the subject of Monika Sosnowska’s exhibition in the Garage in 2020, see https://garagemca.org/en/exhibition/monika-sosnowska-i-exercises-in-construction-bending-i (accessed 11.04.2020).

[3] See Ekaterina Nozhova, Networks of Construction, Munich: Hirmer Verlag, 2016, p. 5. I would like to thank Monika Sosnowska for sharing her collection of latest publications about Shukhov.

And Warren Niesłuchowski Was There

Paulius Petraitis: ‘A man with dark hair and a sunset in the background’

Hopes for the Future of Art