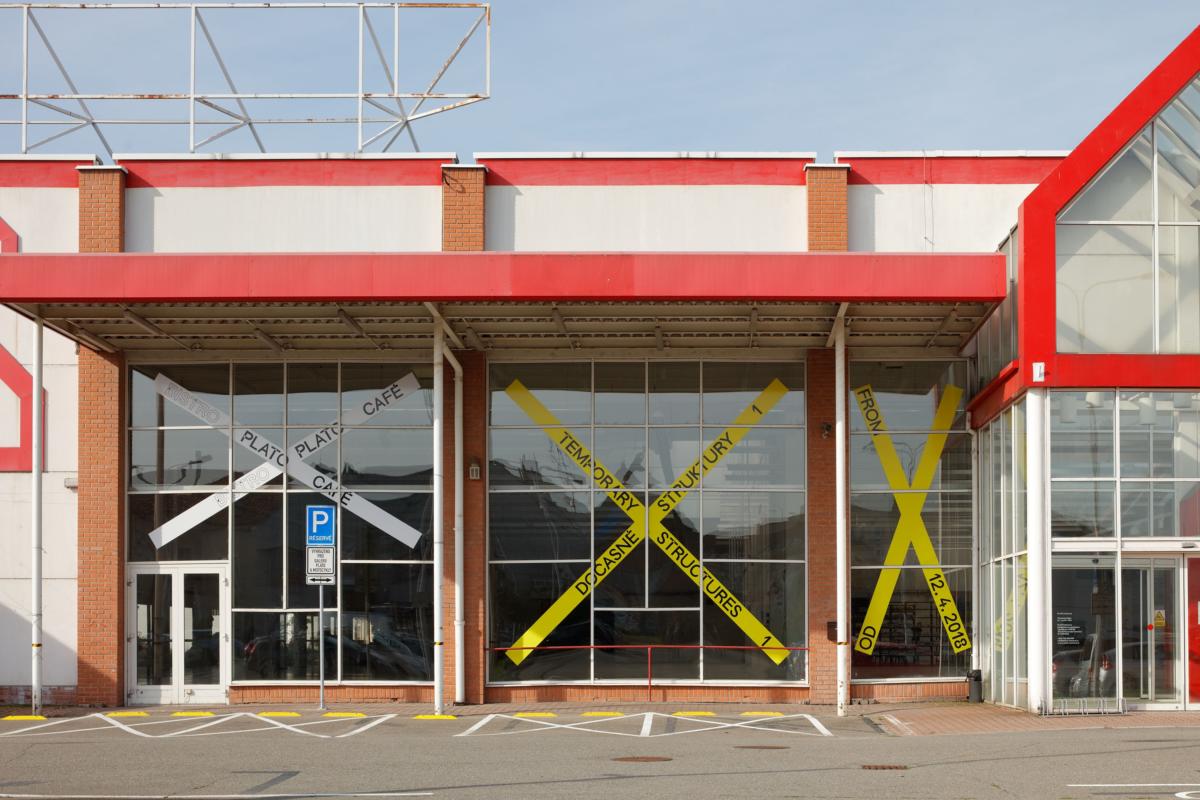 PLATO Ostrava
PLATO does not aim to build its own collection. Its own precarious and mobile existence in the former industrial heartland of Ostrava has become a tool for exploring the meaning of site-specificity and contemporary art’s use and function.

From its conception to its ongoing, evolving delivery PLATO, the regional contemporary art institution in the city of Ostrava, is a unique project. It started in 2013 in a former industrial estate in Dolní Vítkovice as a short-term, grant funded art space, moving to an abandoned clothing shop in 2016. Testifying to the drive and vitality of Ostrava’s art scene, its positioning as a nomadic project has been taken as an opportunity for its own ongoing re-articulation and re-definition. Since the beginning of 2018, PLATO has inhabited a generous 5000 square meters in a former Bauhaus, the gardening and DIY chain superstore, waiting to relocate to a closed abattoir nearby which will be reconstructed in 2022.

PLATO, even though it is presently funded from the city’s budget, does not aim to build its own collection. Its own precarious and mobile existence in the former industrial heartland of Ostrava has become a tool for exploring the meaning of site-specificity and contemporary art’s use and function. Upon arrival at its current location, PLATO’s curatorial team—consisting of Jakub Adamec, Linda and Daniela Dostálkova, Michal Novotný and Marek Pokorný—initiated Temporary Structures, a series of curatorial and commissioning projects as a process of building institution’s own infrastructure and its own ‘collection’ of artworks. Created for PLATO by renowned Czech and international artists, they were designed as the facilities that we would expect in a larger art institution, such as a bookshop, information point, cloakroom, cafe, library, cinema, garden and performance space, that serve as functional units in the day-to-day running of the gallery. 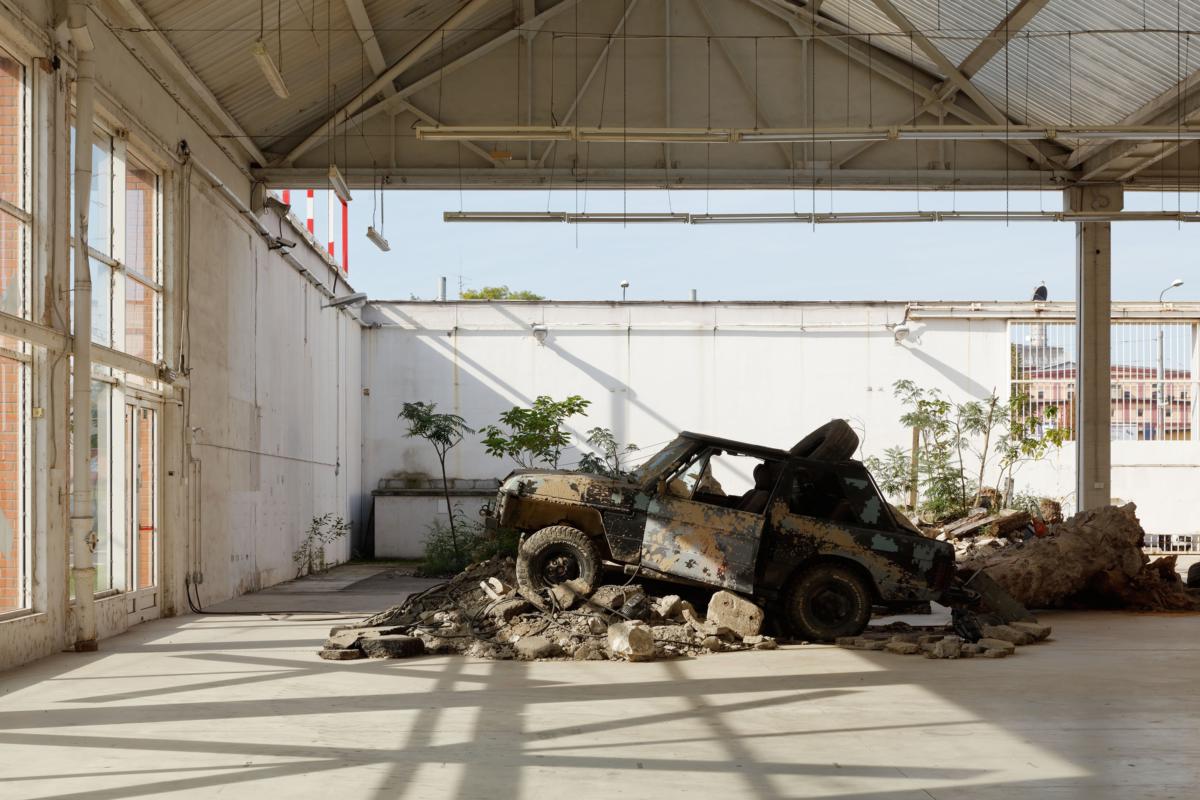 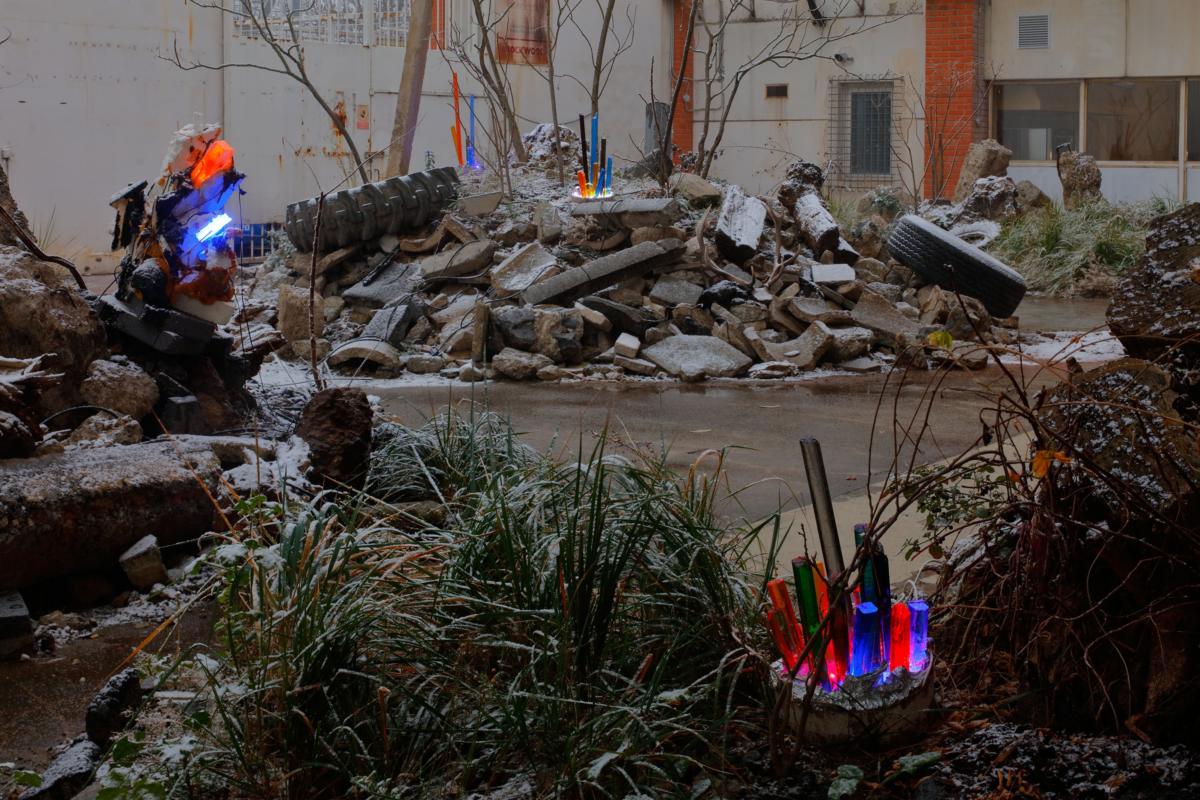 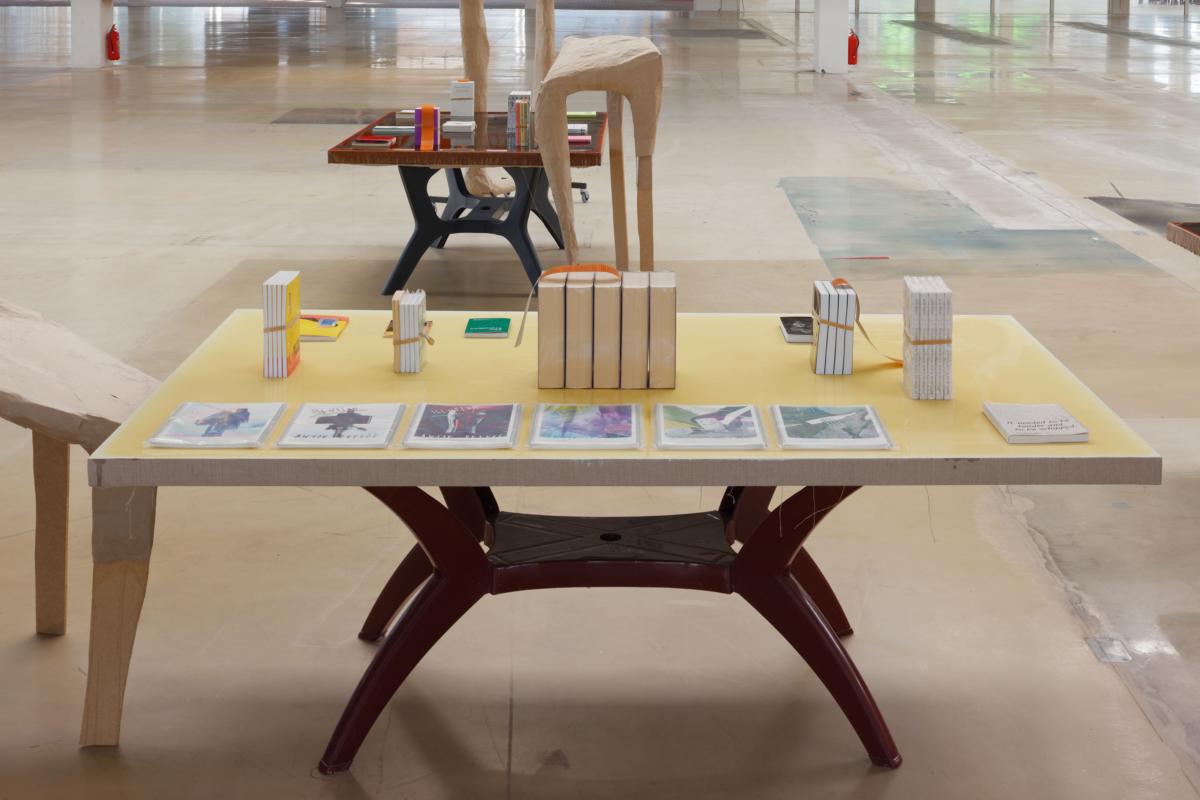 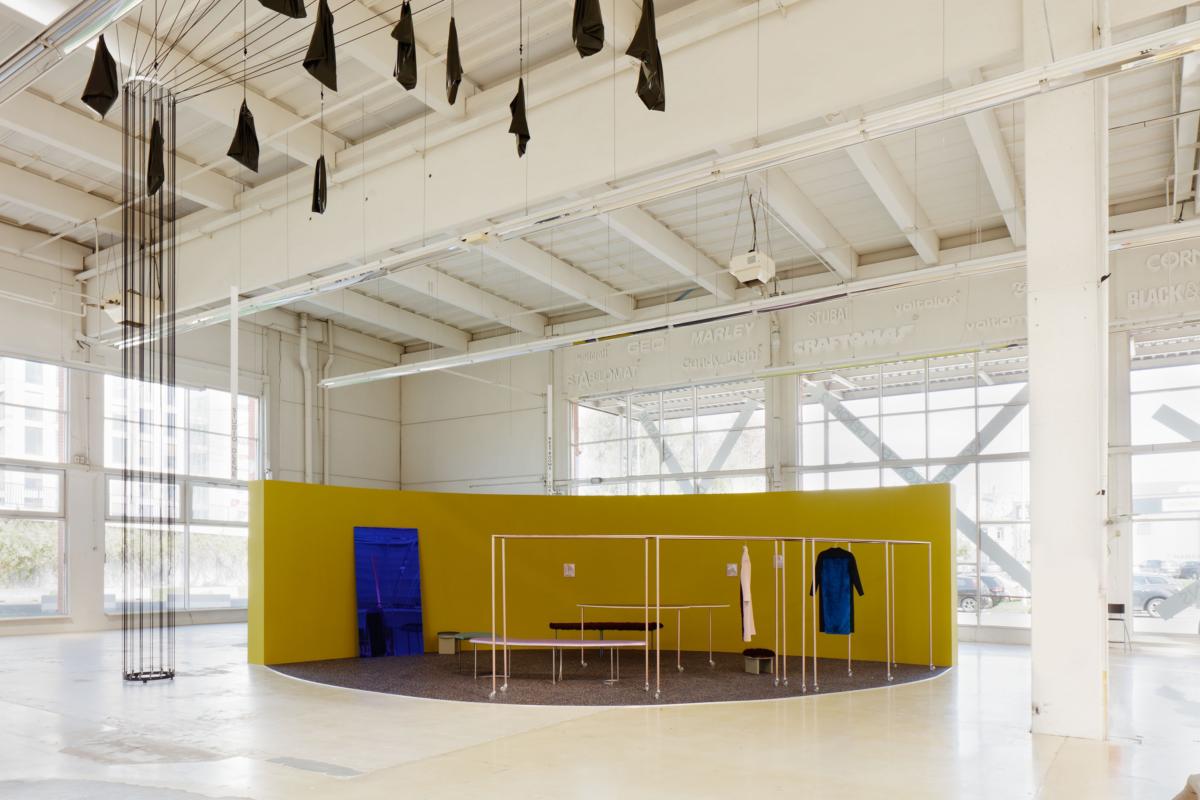 With the curatorial focus attuned to Ostrava’s historical and geopolitical proximity to Poland, the dilemmas of the provincial versus global is sensitively reflected in its programming. Spreading over what was Bauhaus’s shop floor, Temporary Structures negotiate all these influence with references to Pop’s appropriation and productivist strategies while creating its own institutional critique. By the entrance Temporary Structure 5, Shepherds, designed by the French artist Stephanie Lagarde and curated by Daniela & Linda Dostálkova, is a tactile yet oddly cryptic structure serving as PLATO’s information point. An irregular circle wrapped in beige insulation gear with pockets, stitchings, black fastening, rolled up mats and hood like protrusions hiding iPads, it resembles an urban military observation base. It is also a threshold and its well padded walls provide a shelter for gallery’s staff, meeting audiences to replay set of social rituals and interactions we expect to have around contemporary art.

With the curatorial focus attuned to Ostrava’s historical and geopolitical proximity to Poland, the dilemmas of the provincial versus global is sensitively reflected in its programming.

While utility and function as art has been a prerequisite of Temporary Structures, it is when they succeed in subtly questioning of lived norms, expectations and behaviours we engage in around them, they are the most successful.

The PLATO Café, a Temporary Structure 1 inspired by the Chinese zodiac and crystals, by Polish artist Dominika Olszowy is fairly easy to navigate as a trendy café and perhaps its inner workings can go unnoticed. The Eye Drop Cinema by Zuza Golińska—which along with the café was developed in collaboration with the curator Jakub Adamec—works primarily with the impact on the sensual and tactile, designed as an auditorium full of highly seductive, lurid pink loungers set on extravagantly patterned carpet, for viewing moving image and hosting discussions. How does its aesthetics, inspired by opium dens, make us experience the idea of cinema, of watching? The pattern, colour and softness, strongly associated with women’s art here eloquently question values of modernist neutrality.

Other Structures are more abstract and unpredictable. Mutual Investigations, the library of Jan Šerých, is organised using a system designed by the artist, asking questions about how we approach knowledge through categorisation and taxonomies. Yellow, Temporal Structure 6 created by the artist Martin Zet in collaboration with the educational team of PLATO, consists of a large light lemon yellow semicircle on the floor with a table-like sculpture made of chiseled clay. Rejecting a direct functionality in favour of speculation and imagination, only the sinks in the wall are reminders of direct usability. For PLATO’s director Marek Pokorný, “the situation is simple but open. It provides an elementary background, but does not enclose us in it. It anticipates but does not enforce anything”. 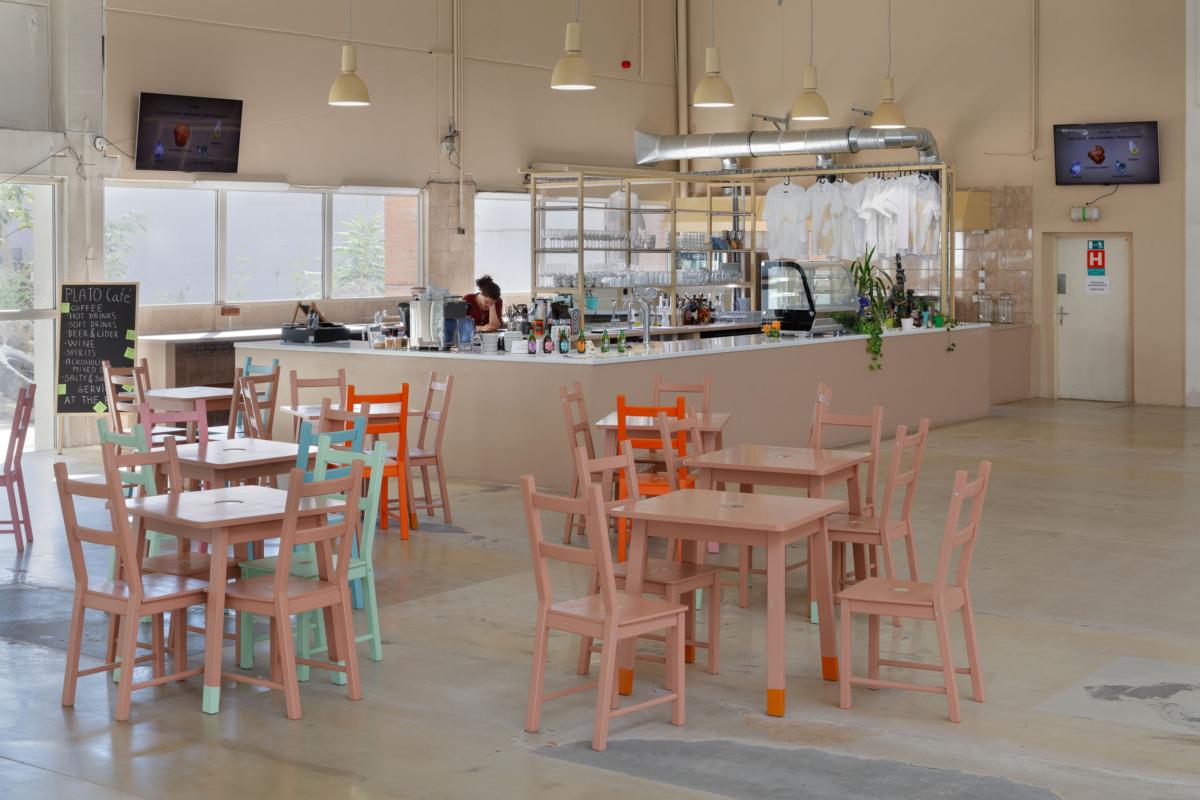 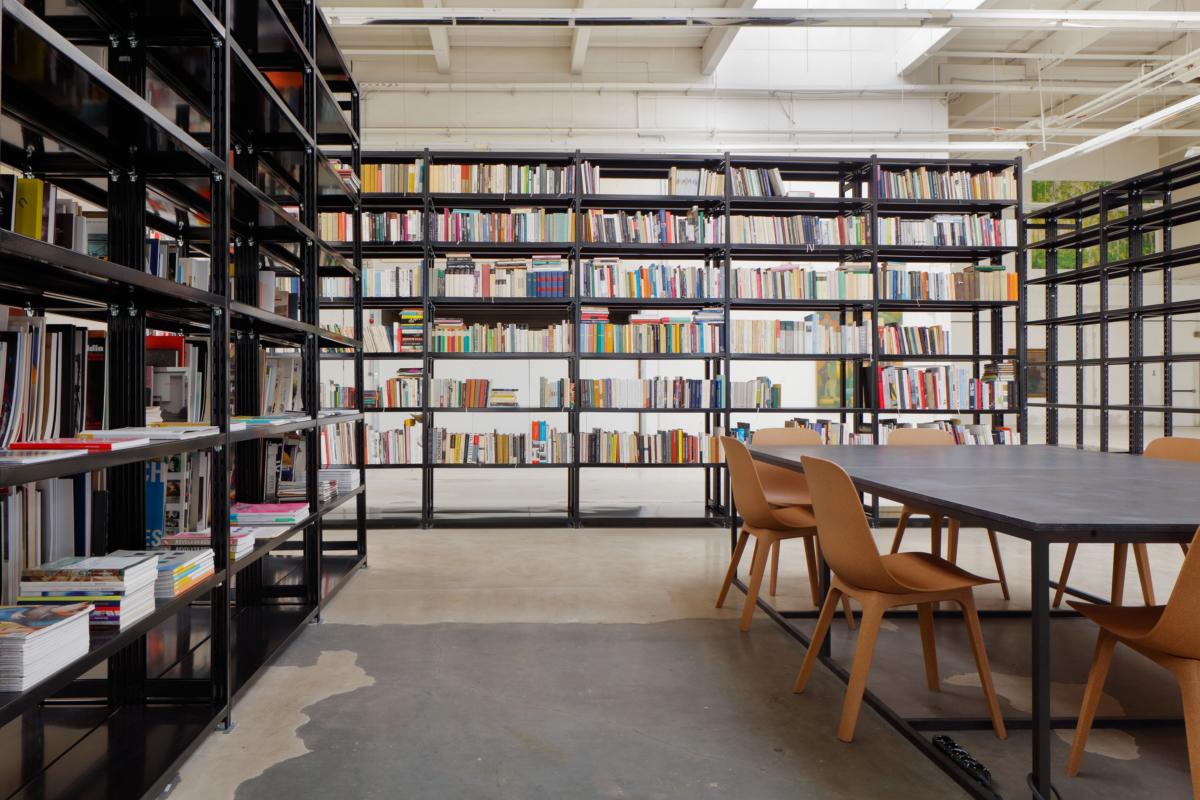 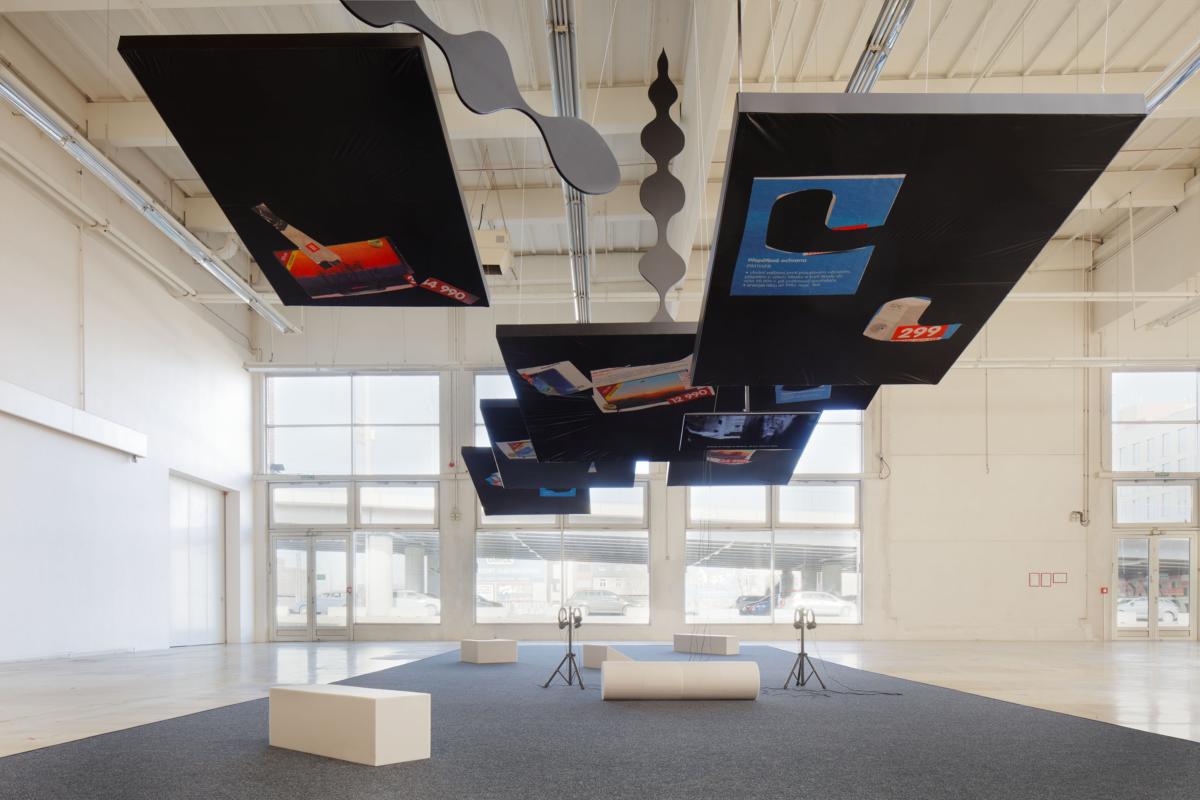 At times Temporary Structures can feel a bit expectant, reminding us they are chiefly multi-use performative platforms to facilitate, to work, to engage. A large concrete gathering of semicircles, Stage, by Than Hussein Clark, subtly merges with the parking lot outside of the building with extravagant theatrical curtains letting in enough sunlight to create a sense of intimacy. It is evident here, as in other Structures, that our engagement is not only desired but a material of the work. Studio Olene by Klára Hosnedlová, whose soft, opulent surfaces stand out in contrast to her signature needlework, currently hosts the exhibition Oh, my Own? by Lucie Rosenfeldová. The playfulness of this approach is very successful, facilitating unexpected dialogues even if, when combined with the wealth of PLATO’s public programme, one can start to feel a bit disorientated by layers of spatial and contextual relations.

Aesthetically and conceptually, the Temporary Structures stand as a reminder of the mobility and wealth of international corporates such as Bauhaus, that have left post-socialist regional cultural institutions lagging in their footsteps, making do with the spaces they leave behind.

Temporal Structure Display focuses on the modes of showing and displaying of contemporary art through four artworks. In the presentation structure by Zbyněk Baladrán, The Powerless Source of All Power, several sculptures in the shape of large flatscreen TVs are tilted from the ceiling, evoking a sense of dystopian nostalgia, with ideologies of power ticking somewhere in the background. While Baladrán’s installation articulately explores the professed idea of Display through the dynamics of embodiment, text and materiality and it is quite satisfying to consider Daria Melnikova’s invitation to Ostrava art school students to show their work in her work House of Muses next to it, on the whole the exciting tension between the use of art, temporality and utility specific to other Structures seems watered down in Display.

This can be explained partially by the fact that all Temporary Structures emerged gradually and have been made without a prerequisite to respond to one another. They are held together more by the overarching conceptualisation as gallery infrastructure than by the emphasis on visual relationships. This concept is something that becomes quite problematic in Display. The four works here are positioned very closely together, yet in places they come across as separate entities and even well articulated ideas of ‘display’ do not stop it from seeming a bit heavy handed. 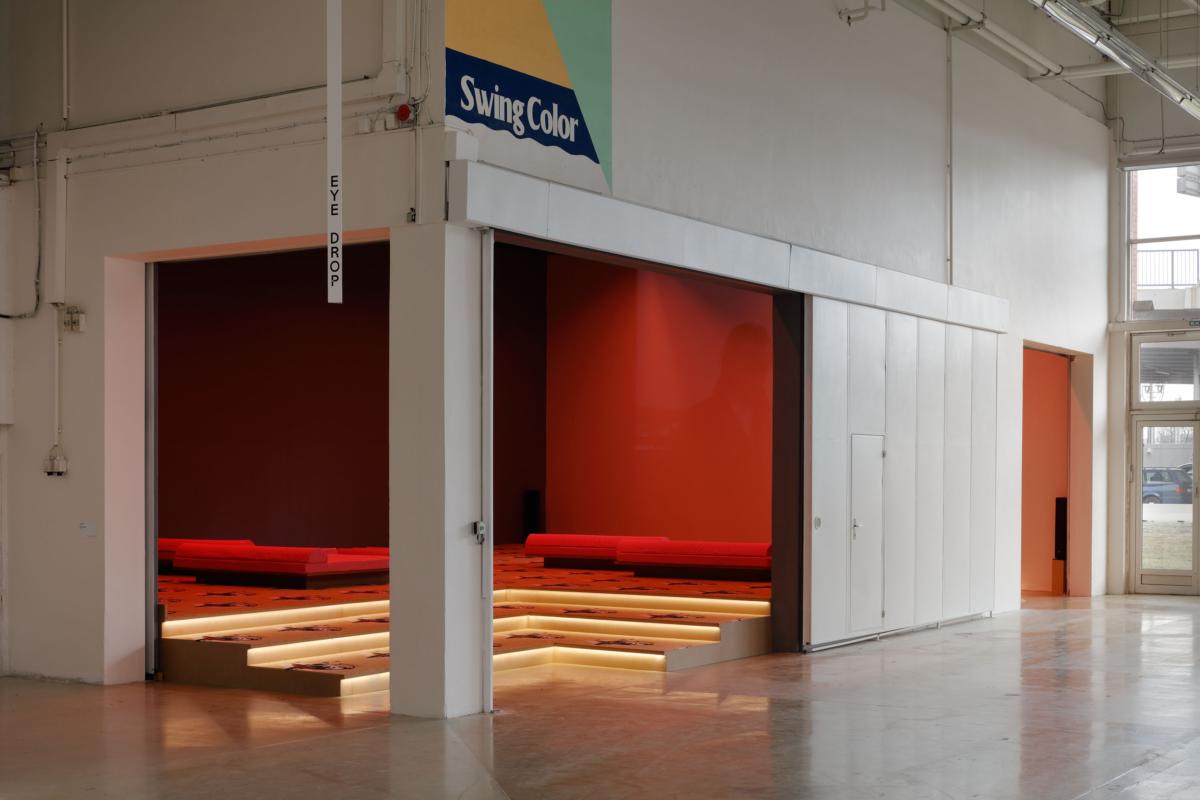 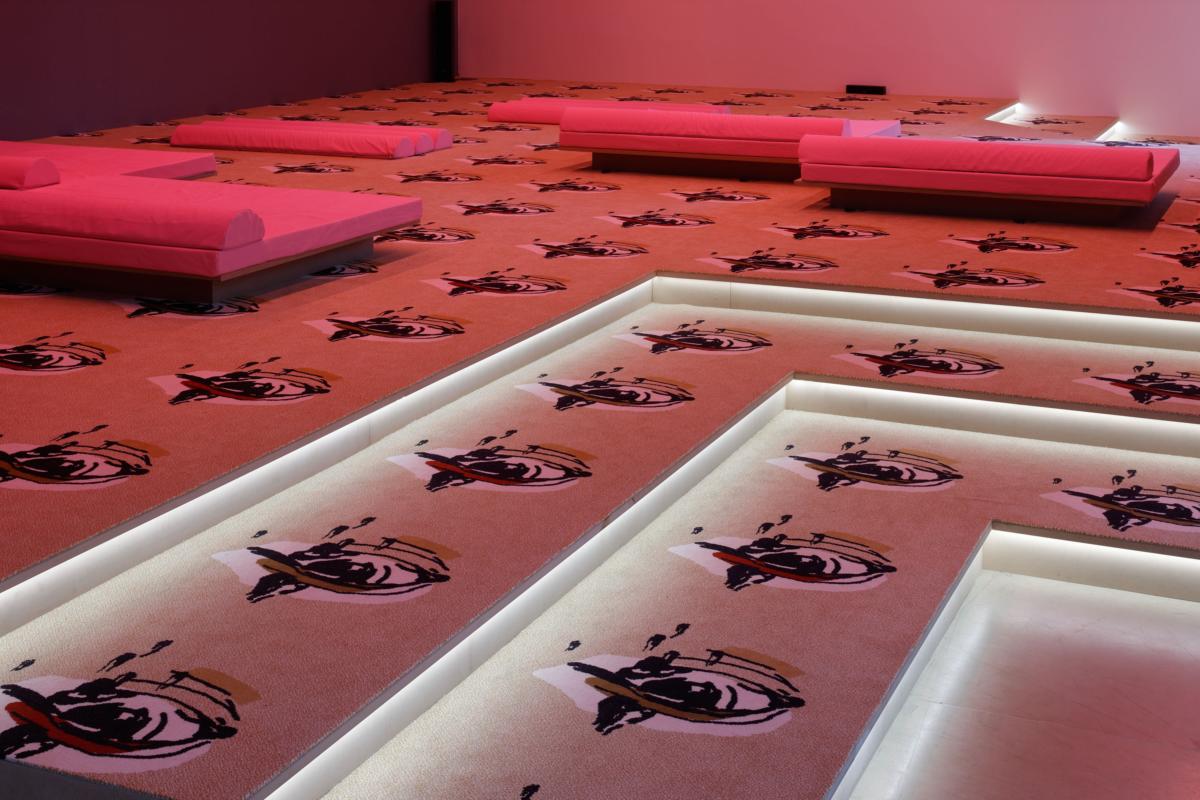 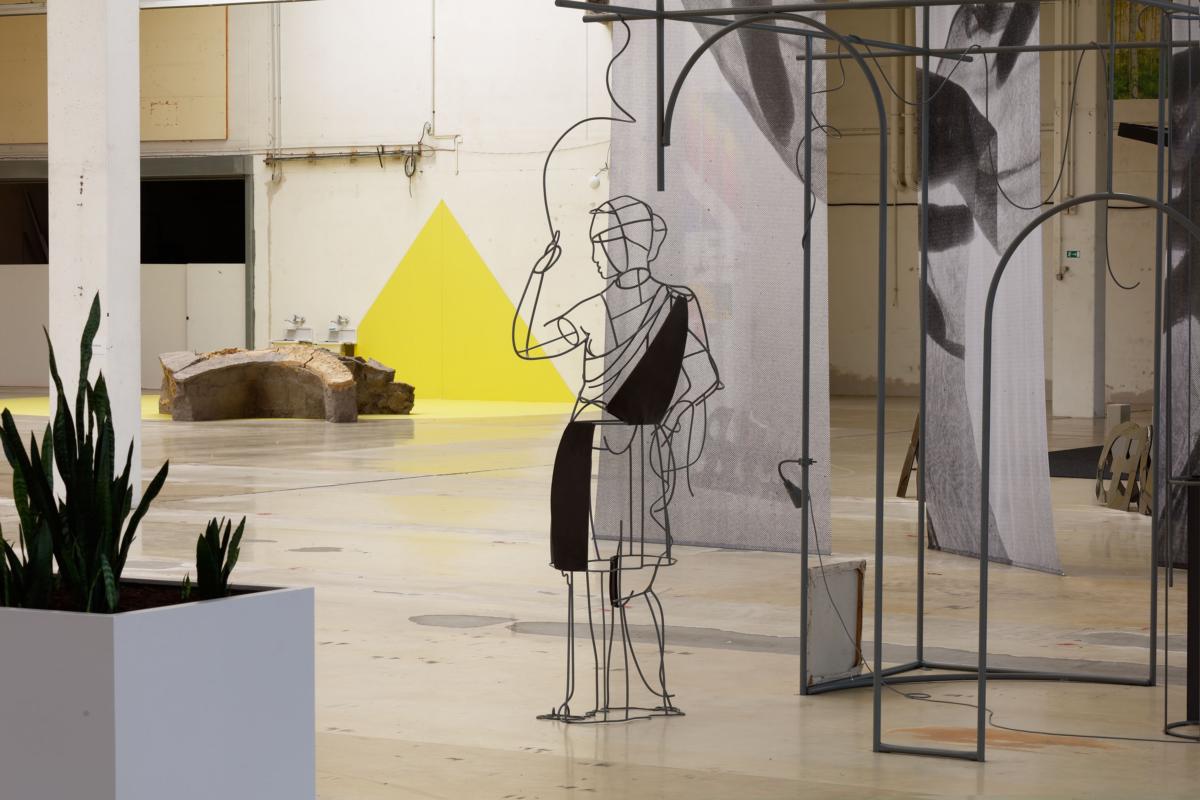 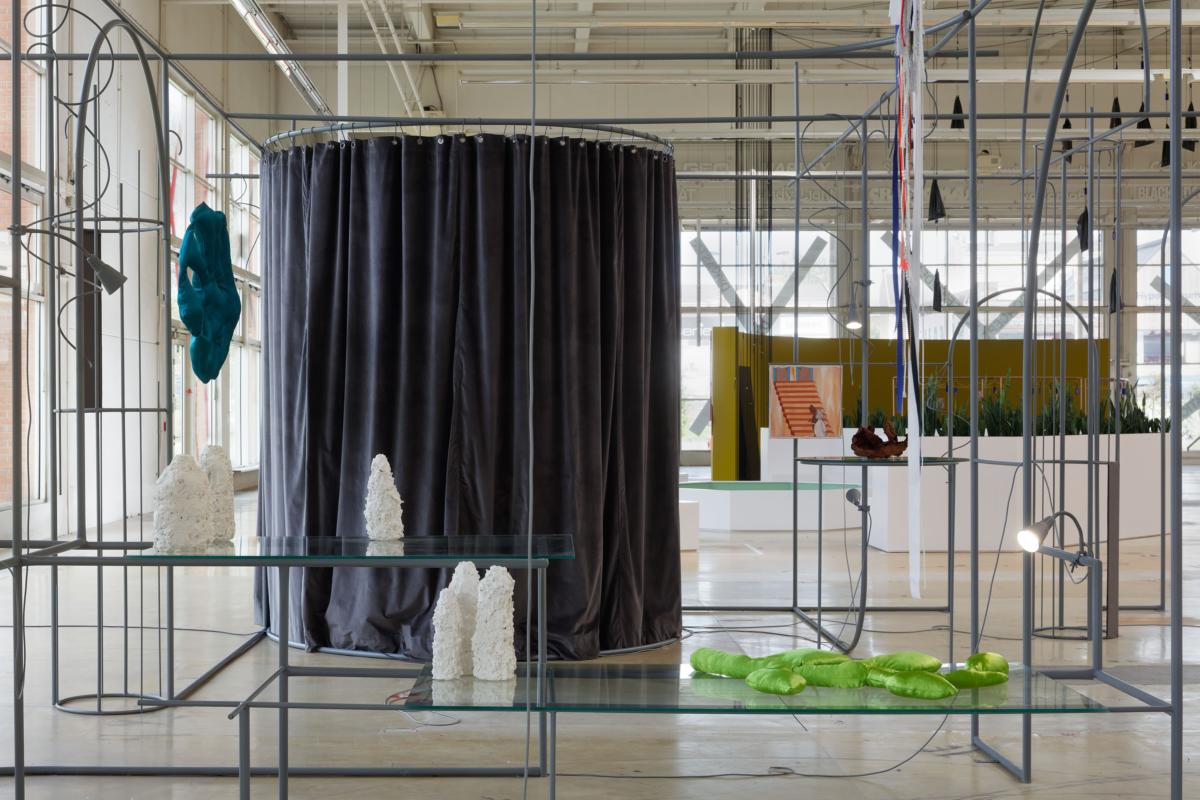 Overall though, there are many exciting questions which PLATO, through its experimentation with institutional critique, brings to the fore. While Temporary Structures are highly successful in questioning the value and status of art, as it is they do not want to ‘end’ it by dismantling underlying structures of its making and institutional power. The audience’s role, for example, is integral to Structures, yet to what extent can we say that PLATO’s audience has active agency and control here? One can wonder what would happen if PLATO opened itself to question hierarchies underpinning contemporary art by a deeper focus on the possibilities of the collective making process.

Aesthetically and conceptually, the Temporary Structures stand as a reminder of the mobility and wealth of international corporates such as Bauhaus, that have left post-socialist regional cultural institutions lagging in their footsteps, making do with the spaces they leave behind. Negotiating resistance and complicity, they are to an extent an artistic and institutional response to the current neoliberal condition, through contemporary art’s performativity, multi-use, inventiveness and adaptability. This in itself is a considerable achievement. As an integral tool of PLATO’s unstoppable creative force it can be said that a very few contemporary institutional projects match it in its accomplishment, ambition and scale.