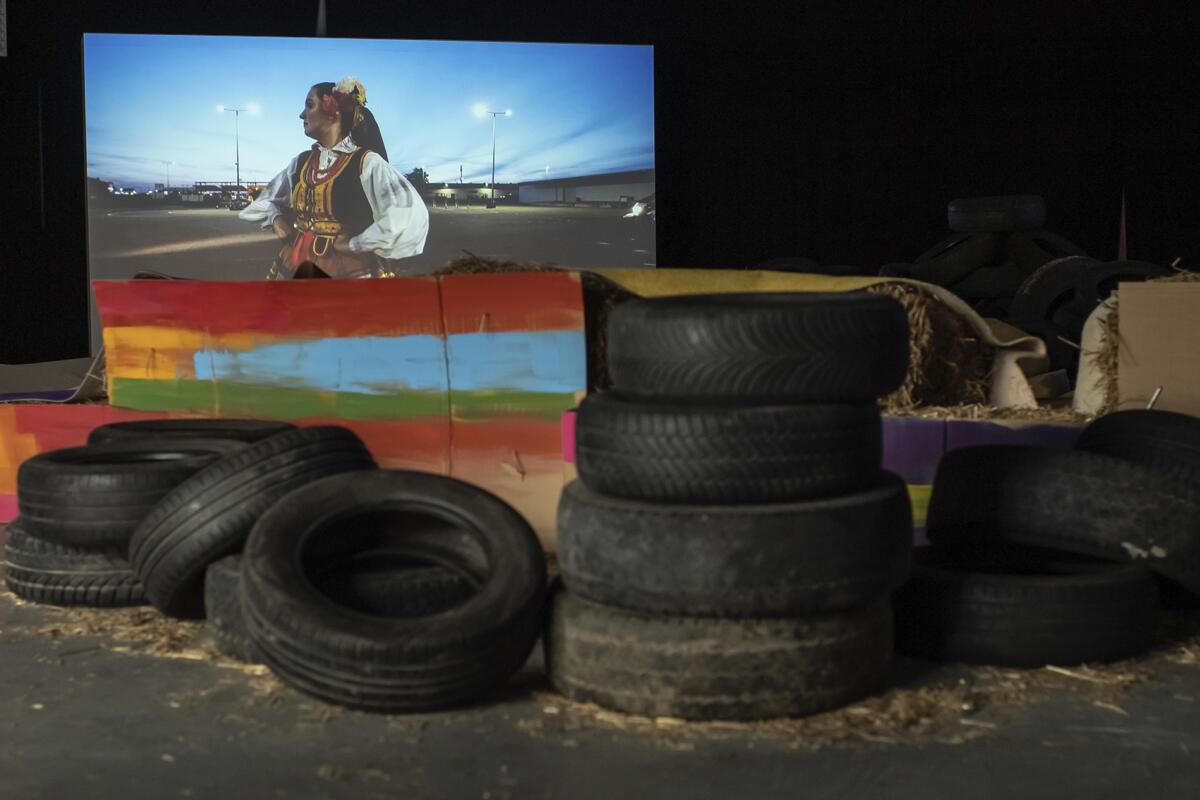 Barbara Gryka’s (born 1992) performative activity expresses an escape from the world of easy dichotomies – femininity and masculinity, countryside and city, domination and submission, glitz, and poverty. A surprising escape – in a folk costume and on a motorcycle.

One enters the world created by Gryka through a space full of “products” – objects created in conditions of scarcity, from residual materials and junk[1].

You can almost immediately hear the roar of the engines intertwined with commands given in a firm female voice. The screens surrounding the space show eight figures on motorcycles and a girl in a folk costume. After a while, the next elements of space begin to spin along with the perception of the viewer trying to perceive all the nuances of the show. After another seconds, everything is spinning – tires, straw, frills and ribbons of a dancing performer, beads, embroidery, artificial flowers, and motorcyclists. Clear borders, sharp angles of differences and binary divisions disappear in dance. The gallery space turns into a petrol station right behind the local Commune Office. It is at this point that dusk falls, you can smell grease, petrol, and hot asphalt. The guys come in cars and on motorbikes, the girls come in Sunday dresses. Anything can happen here in a moment. Barbara Gryka started working on the “Motorcycle Dance” project in 2017 together with the curator, Emilia Lipa, as part of the Synergia artistic and curatorial exchange. The artist then invited a group of motorcyclists from Lublin to cooperate with whom she worked on a performance that used dance and motorcycles to talk about the seemingly sharp divisions between city and countryside, tradition, and the present day. Ultimately, the performative activity did not take place due to the injury of one of the motorcyclists, but the artistic and curatorial duo returned to the idea in 2020 engaging a new group (this time there was a woman among the male motorcyclists). The first edition of the exhibition took place in May 2021 at BWA Zielona Góra art gallery. The exhibition at Galeria Labirynt is accompanied by an artistic installation made of recycled materials – old tires, bundles of straw, planks from the trash can – in a word – litter that is thrown away without regret and deep reflection on their possible future usefulness.

Gryka’s work can be treated as a kind of feminist manifesto in which the strategy of taking control of the male-centred, hegemonic world of motorcycle racing and acrobatics, symbolising the patriarchal, aggressive order, is quite clearly presented. It is the artist who sets the tone for the motorcycle show, with an imperious gesture pointing to the next figures of dance referring to local Lublin traditions, requiring from motorcyclists control and precision at the same time. The peculiar recovery of “fun” for feminism, culturally not intended for “girls”, who are expected to be rather submissive and subtle through the process of socialisation. At the same time, the display creates a new space that transcends the binary division into what is feminine and masculine. At the first stage, this gesture shows the female subjectivity, pushed beyond the limits of the male-centred, all-encompassing discourse, and everything that is culturally related to female subjectivity – folk dance, combined with the performer’s colourful, richly decorated, and eye-catching costumes gives a new form to the previously stereotypically male imaginarium of violent engines growl[2], petrol smell and unsafe speeds. In this process, it is possible to see the subjugation of the aggressiveness of the sounds of “tires screeching”, phallocentric displays of bravado and speed, and the reversal of the hierarchy – the introduction of a new order in which the artist controls the chaos giving shape and a new meaning to the show through the consistent, laborious work of a dancer and choreographer, requiring time, dedication, precision and sacrifice. In the next step, the artist gets on the motorcycle of one of the motorcyclists in her folk costume, departing (riding) from the order that had been so painstakingly reversed. It is obvious, then, that the new division of power is something to be avoided in order not to reproduce another toxic hierarchy, not to petrify the rules of reign established a moment ago. Thus, the breaking of the patriarchal order of power is not accompanied by the establishment of a new, permanent structure, but by the marking of the temporary and arbitrary nature of all structures and relations of domination based on the cultural performance of gender.

In the feminism of Gryka’s work, there is an understanding of cross-exclusion – how class origin influences the understanding of culture, folk, motorisation, but there is also a place to play with power imposed by a rigidly profiled imagination. It is a feminism aware of the error of ignoring the perspective of women from outside large urban centres in the emancipatory discourse of the 1990s and the one sensitive to the pitfalls of hierarchy. Freeing the countryside from “epistemic violence” – a narrative in which, as Monika Borys writes, “prejudices against the countryside – expressed in the language of neoliberalism – have been reduced to a narrow and predictable repertoire of associations, signs and images, which together create a certain constantly reproduced regime of representation”[3] is a strong hallmark of “Motorcycle Dance”, eluding the regime’s epistemological perspective of the “large urban centre”. The countryside, which has long been marginalised from the perspective of feminist researchers, in Gryka’s work is a space of “radical opening”[4]. Climate catastrophe, transport exclusion, poverty, lack of prospects, shame of ridicule, folk culture – intersectionality of “Motorcycle Dance” is an opportunity to initiate new spaces to talk about the need to include groups and topics excluded in the dominant discourses.

In the symbolic gestures of empowerment and epistemic opening, it is also not difficult to see the effort to regain the folklore as a driving force that is able to give direction to the present day, and perhaps to stop, at least for a moment, the incessant consumption and production of other things. Not only is the artist’s outfit and the dance she performs with motorcyclists of a folk nature, but also the way of thinking about items that can be repaired, reused, and recovered. In a creatively conscious attempt to suppress the logic of an alliance of capitalism and patriarchy Gryka creates an installation from what is rejected – thrown into the garbage. The installation accompanying “Motorcycle Dance” is part of the discussion on how to practice art in the face of a climate catastrophe. In this context, questions about the conditions of the production of works of art are louder and louder – the costs of transport, which sometimes is many thousands of euros, insurance, the origin of materials and what happens to them after the exhibition is closed.

Somehow, “by the way”, it is possible to recover something else – culture-forming places of villages and small towns, forgotten in the transformative turmoil. It is where small schools, GS municipal cooperatives, Farmer’s Clubs and pubs were closed, petrol stations became meeting places – cafes, clubs, discos – the only spaces for free interaction of young, usually recently motorised people. Out of necessity, it was the local CPN petrol station that began to function as a community-building site. Above all, it gave the possibility of belonging and participation, which are the basic conditions of subjectivity. At the CPN petrol station, where it is easy to imagine “Motorcycle Dance”, cars are usually only refuelled by “local people”, it is not a petrol station on the “exit road” of a big city. And it is so that the inhabitants of large cities, displacing their own origin, are unlikely to appear here. Even just passing through. The artist herself, who comes from Końskowola, perfectly senses the subtleties behind the seemingly easy juxtaposition of tradition and motorisation. She also understands the need to break out of the countryside excluded by liberal discourses, which is possible because of dancing (Gryka was a part of a folk group in her childhood, with whom she often travelled, also abroad) as well as because of having a motorcycle or a car. A petrol station right behind the Commune Office is a place from which you want to escape as quickly as possible, even on a speeding motorcycle, and, at the same time, it is also a place where you must come back to see Poland more clearly and to see yourself in Poland a little more clearly.

translation from the Polish language by Krystian Kamiński