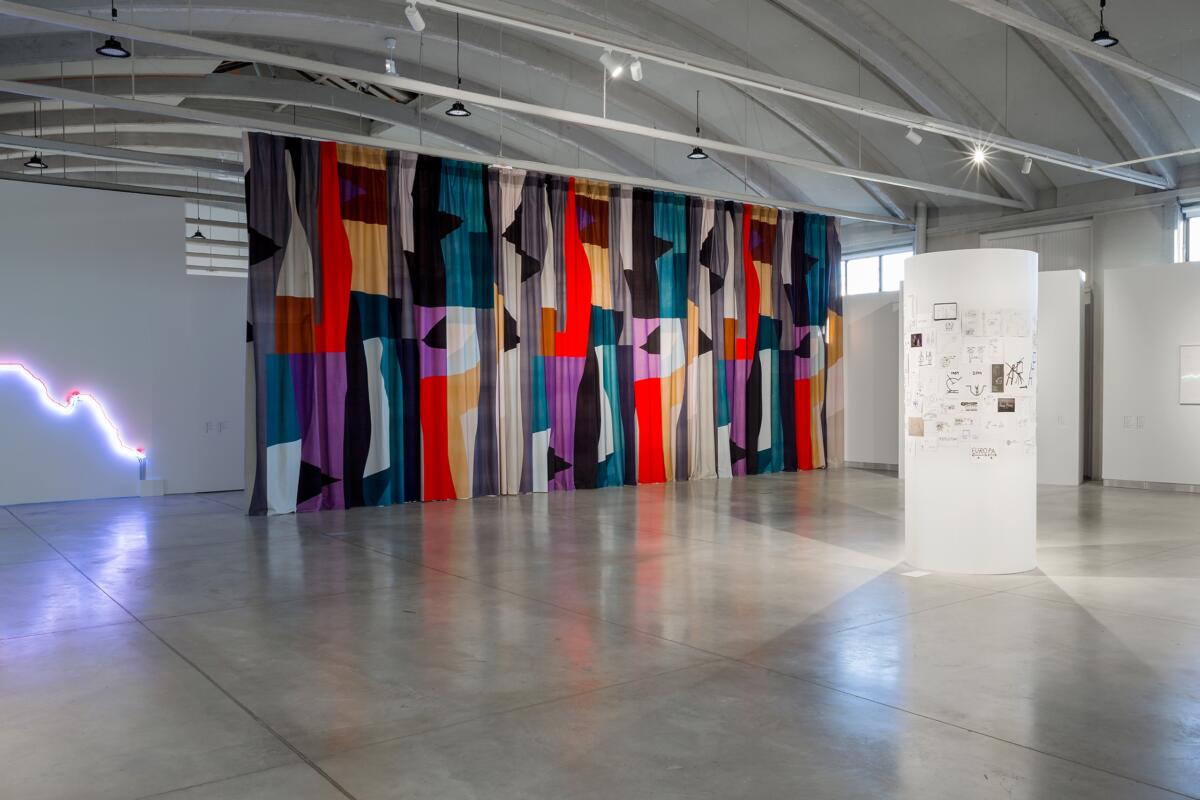 WARM. CHECKING TEMPERATURE IN THREE ACTS is a multi-part exhibition that primarily gives thought to the radical political, cultural and social turns that affect Central and Eastern Europe, but it also inscribes these changes in a global perspective through the lens of universal absurdity. The project gives voice to contemporary artists based in or originating from the Central and Eastern European region who reflect boldly and critically on burning issues such as the rise of far-right politics, globally misplaced priorities, the collapse of democracies, the shrinking of freedom – in both life and art – and the general sense of conditioned fear and hostility prevailing today.

The title reflects more precisely on the mechanisms through which positive notions shift in
our interpretation of the negative realm and become associated with different, contradictory contents depending on the new contexts or situations in which they are used. More concretely, how the originally positive signification of warm – an agreeable feeling, the sense of a fairly or comfortably high temperature, and a behaviour showing enthusiasm, affection or kindness – becomes a warning sign of political turmoil, social irritation, symptoms of climate change or global pandemic, and therefore a signal of both natural and social global instability. In meeting this shift of signification that echoes the misleading phenomenon of general disinformation experienced around the world, WARM aims first of all to be a contemporary reflection on the fundamentally absurd global condition and on the dissonances of the human condition. It also looks to reflect on the hardships faced by contemporary artists, and the conceptual as well as visual answers they seek to soothe the tension and anxiety arising from our critically contradictory times. Their challenge – and ours too – is to bear the absurd reality with dignity and responsibility, by avoiding easy solutions and comforting illusions, attacking comfortable certainties, confronting difficulties on a path of survival through resilience or transformation, finding a way to create new meanings and striving for the freedom of art and the liberation of self.

Inviting artists from the regional contemporary art scene with existing works and new commissions, WARM comprises three intertwined cycles entitled THE NATION LOVES IT, PICKLE POLITICS and THE SCIENCE OF FREEDOM, which refer to artworks included in the exhibition – Jasmina Cibic: The Nation Loves It; Slavs and Tatars: Pickle Politics – or are quotations from artists – Joseph Beuys: ‘To make people free is the aim of art, therefore art for me is the science of freedom.’[1] The imaginary, conceptual theatre play that embraces these three acts is conceived as dramatic and inten- sifying narration. It articulates around the spectacles of absurdi- ty with the intention of dissecting, appropriating and distorting them, but also to playfully pro- pose humour and derision as an intellectual antidote or strategy, an imagined alternative that builds on visionary defiance or poetic escapism. 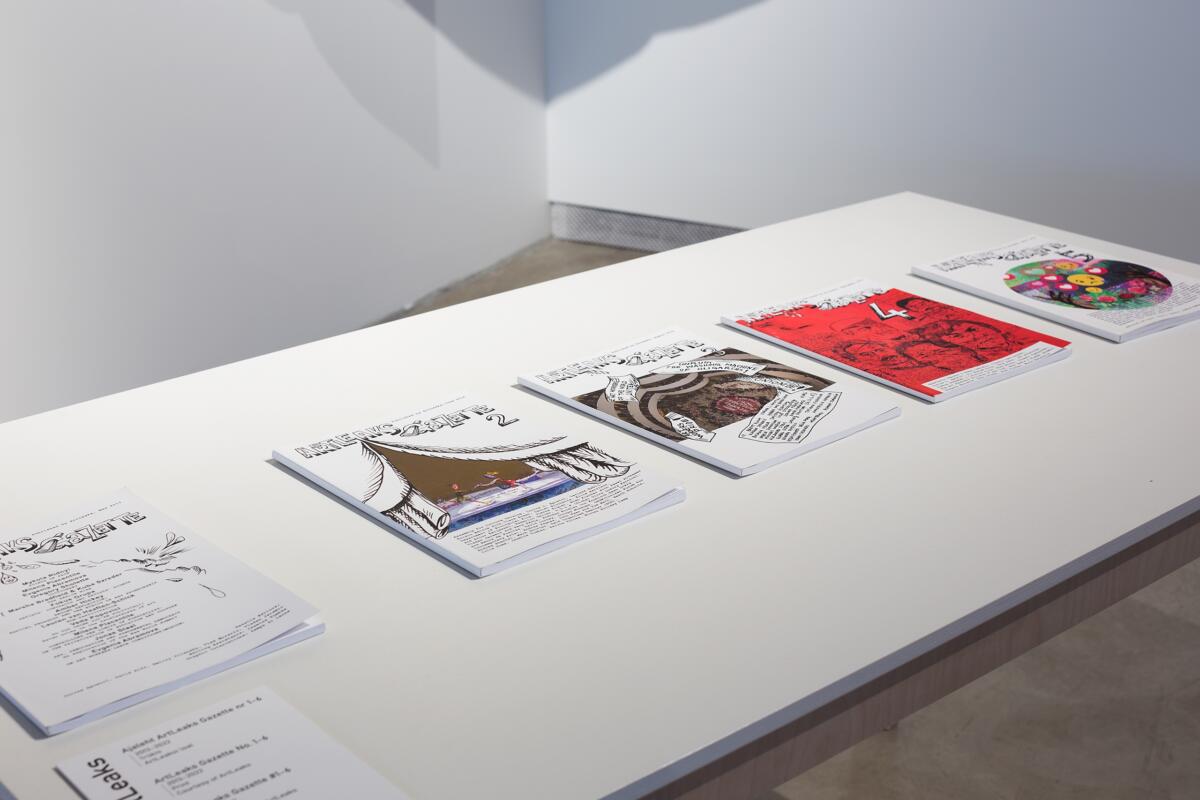 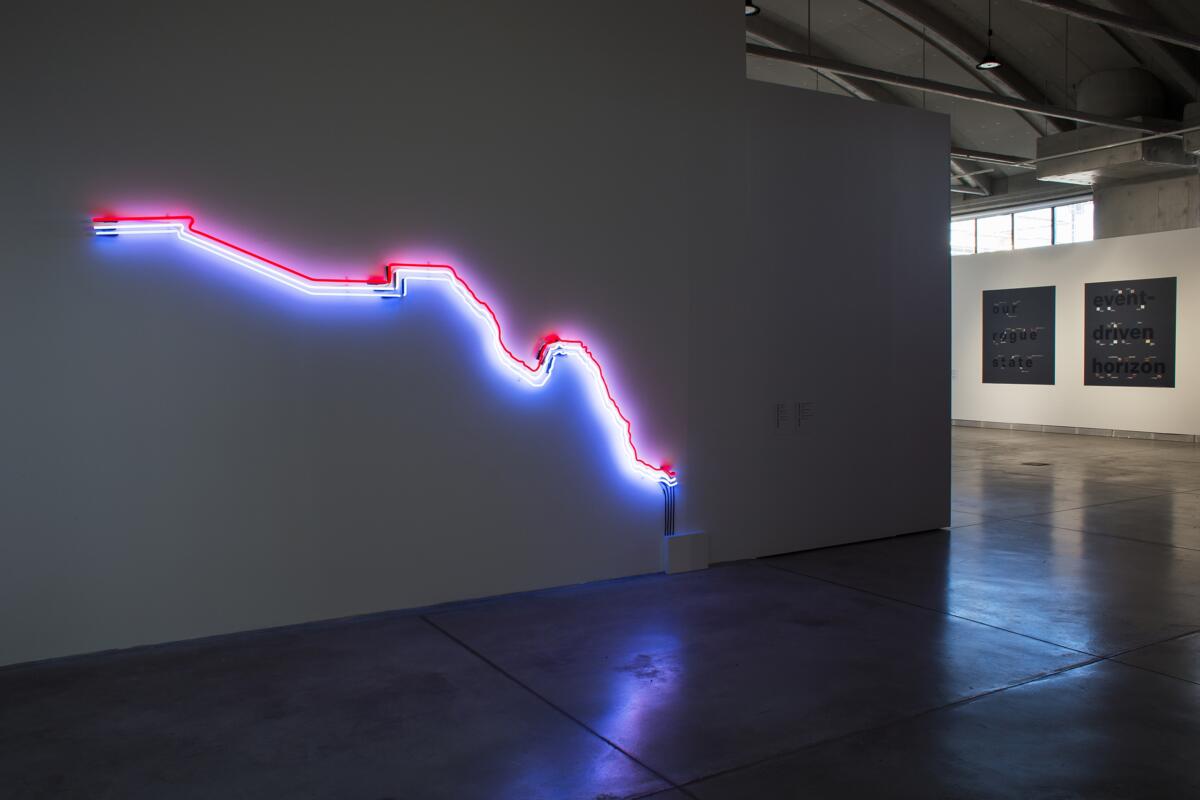 Hubert Czerepok. Americans I am Afraid of, 2019 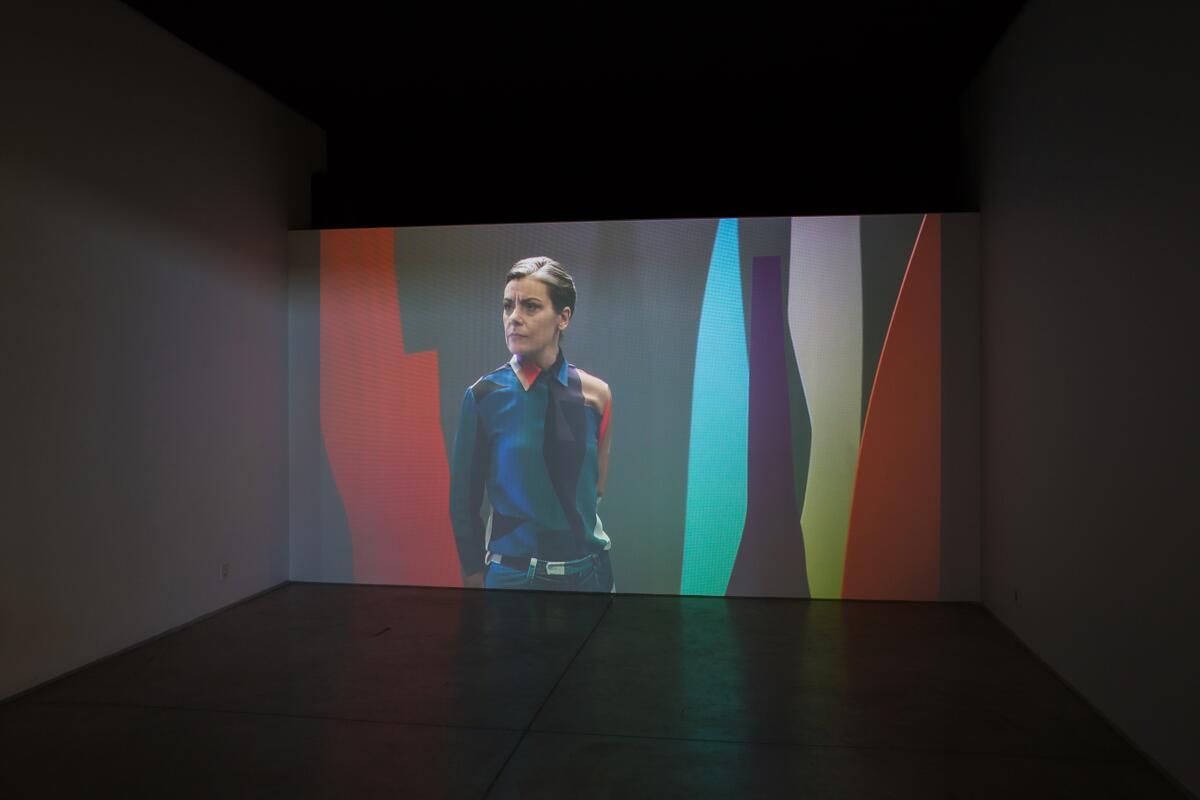 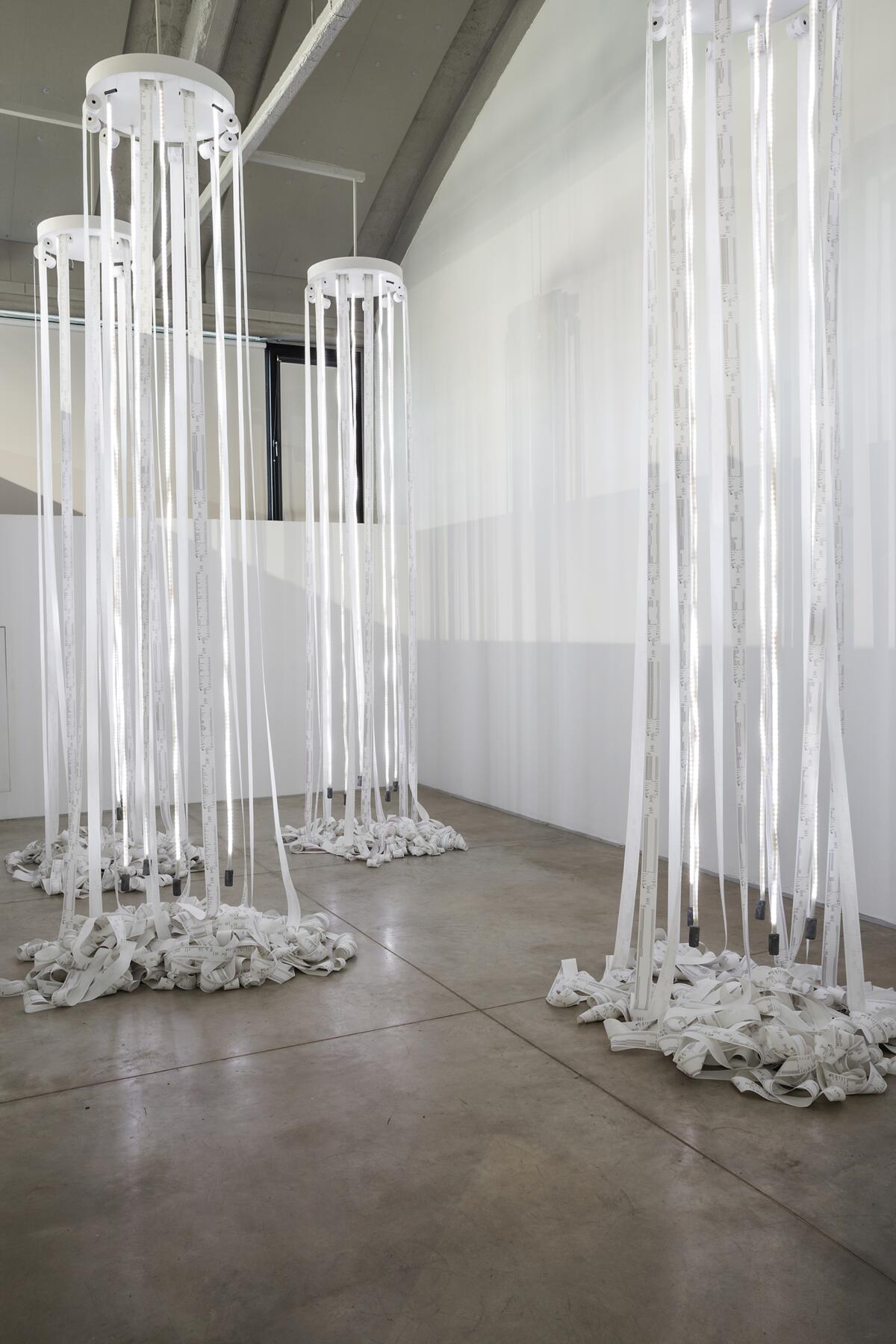 Irena Lagator. Limited Responsibility Society Automatism 2012–, Columns made of bill rolls with textual intervention by the artist; LED lights. Courtesy of the artist 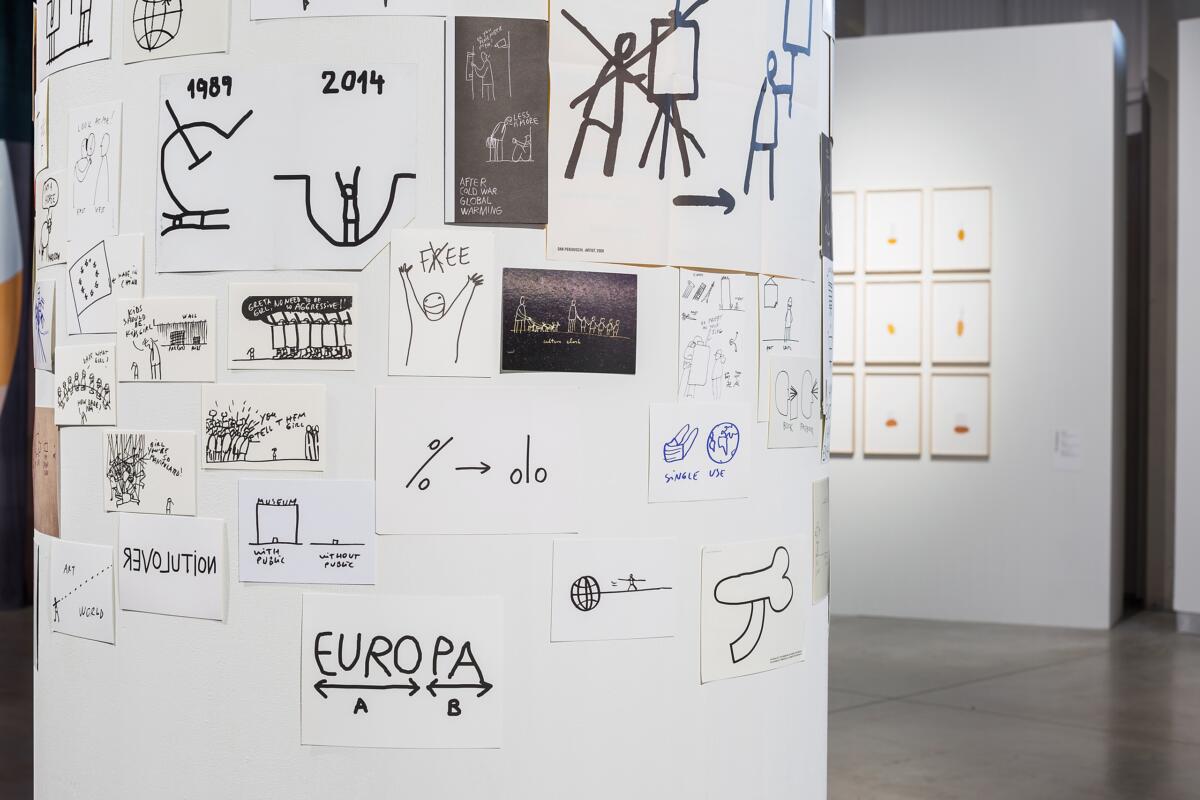 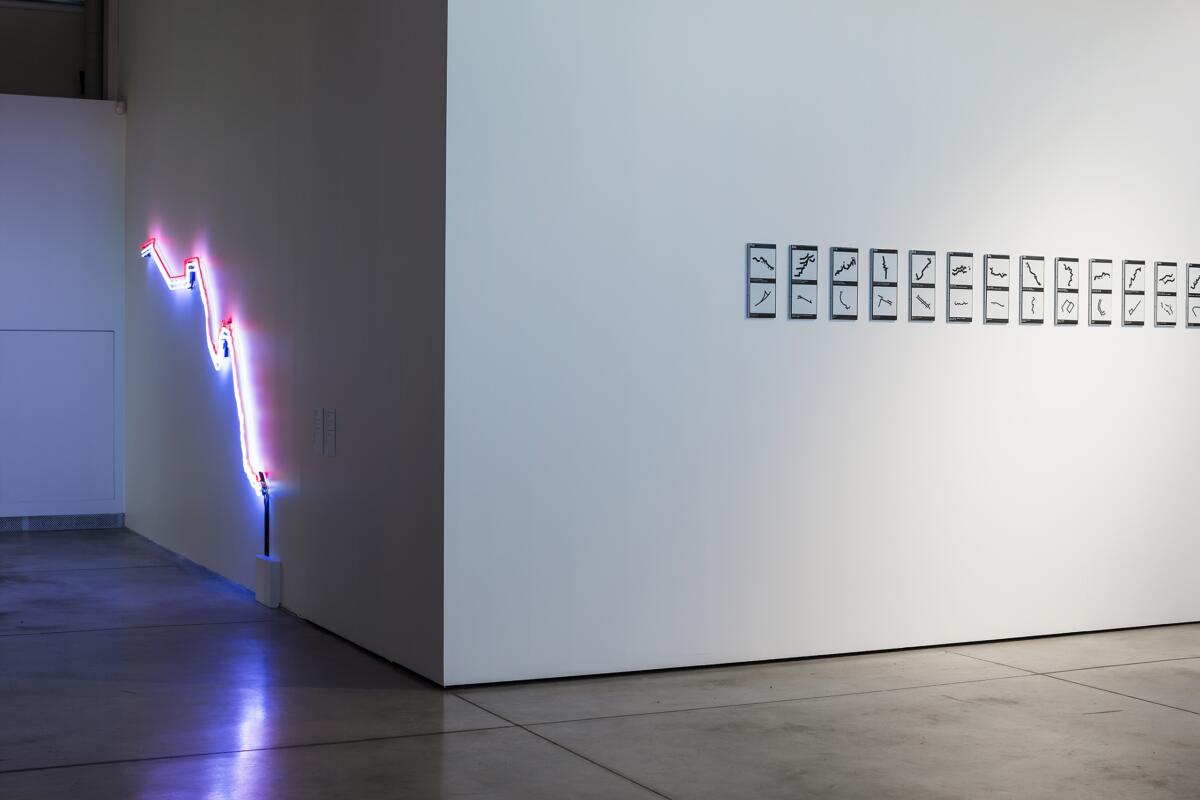 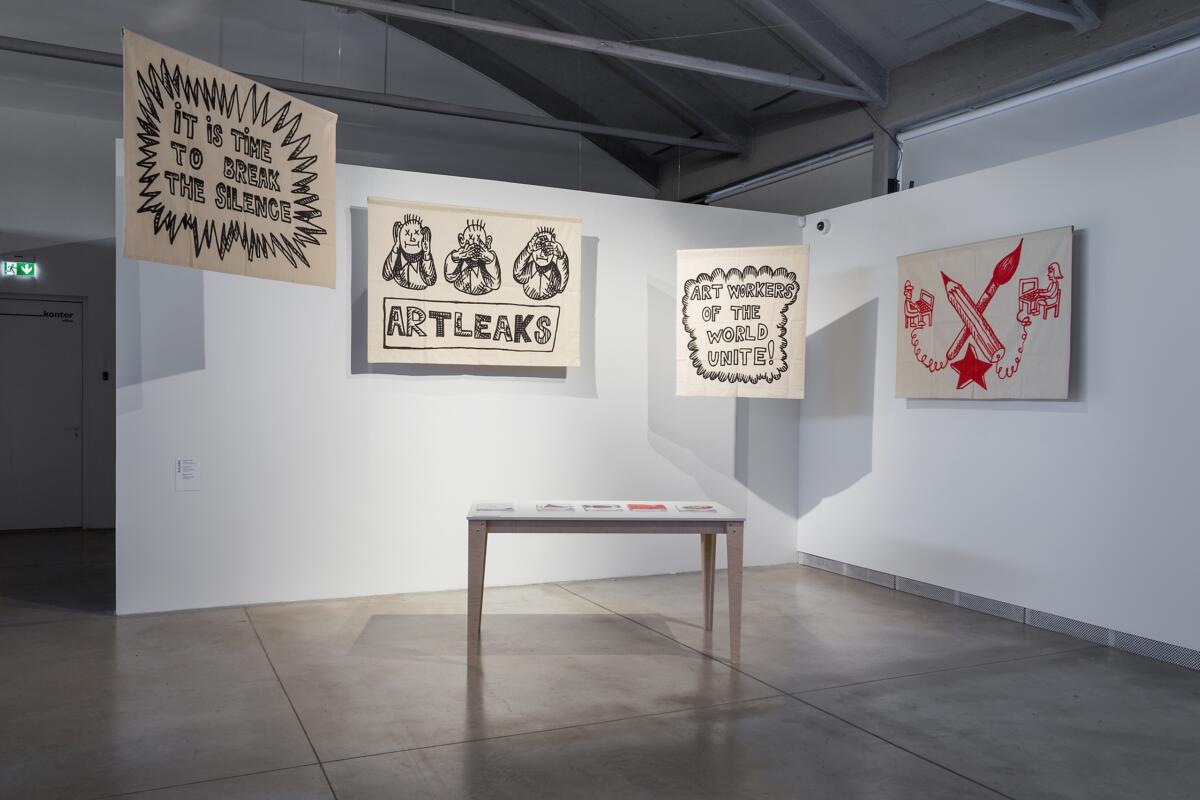 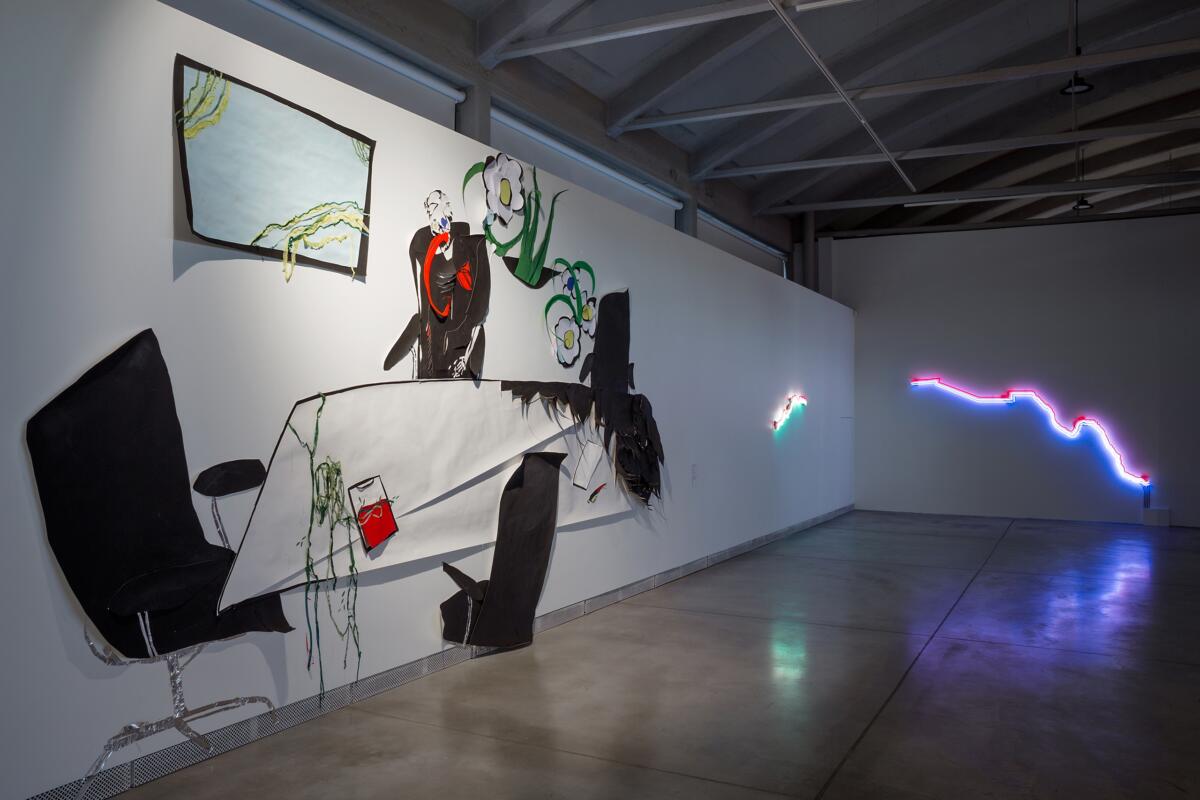 Volodymyr Kuznetsov. Seizure of the Cabinet of Ministers 2022 Wall painting and paper cut-out installation Courtesy of the artist 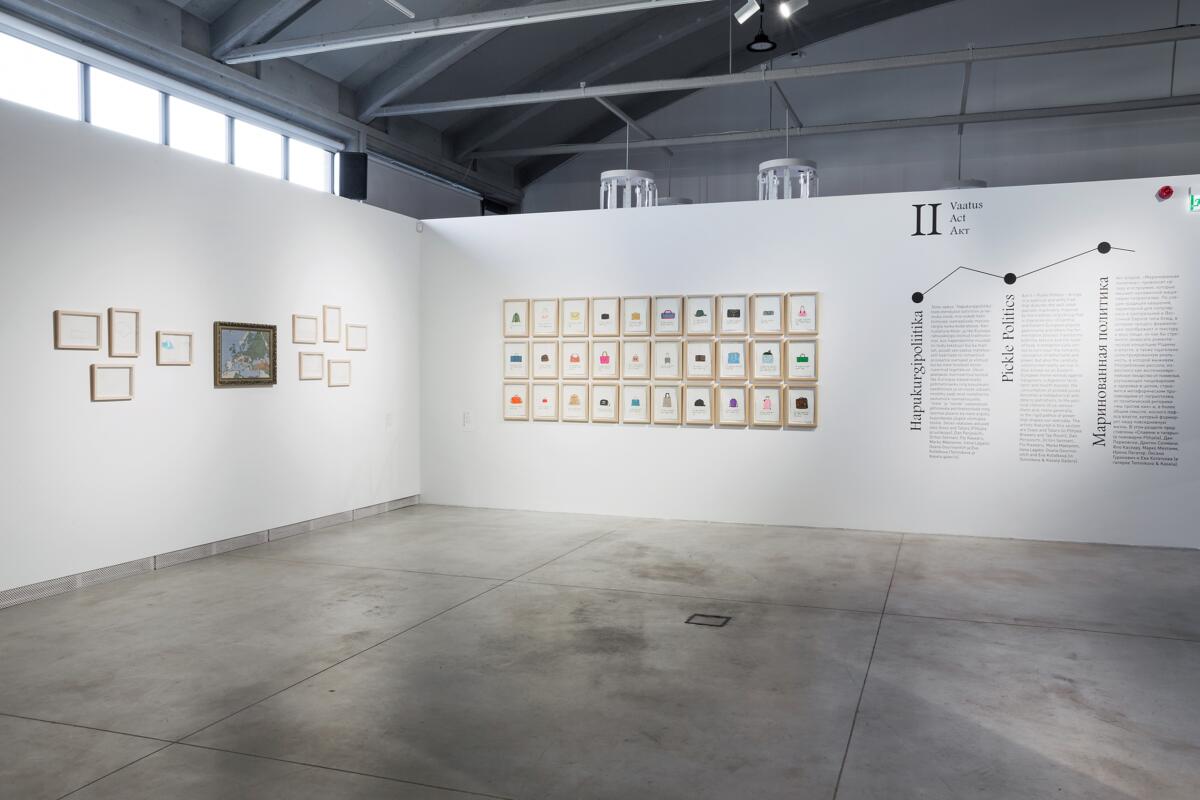 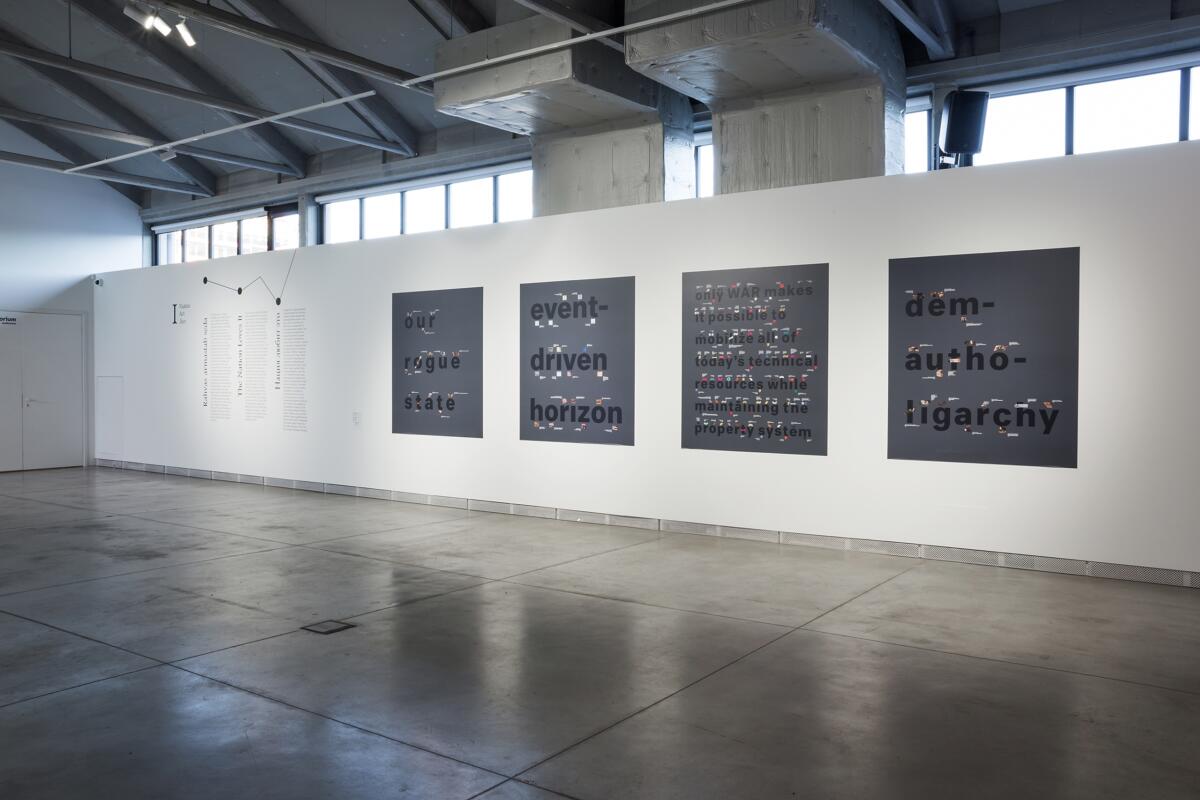 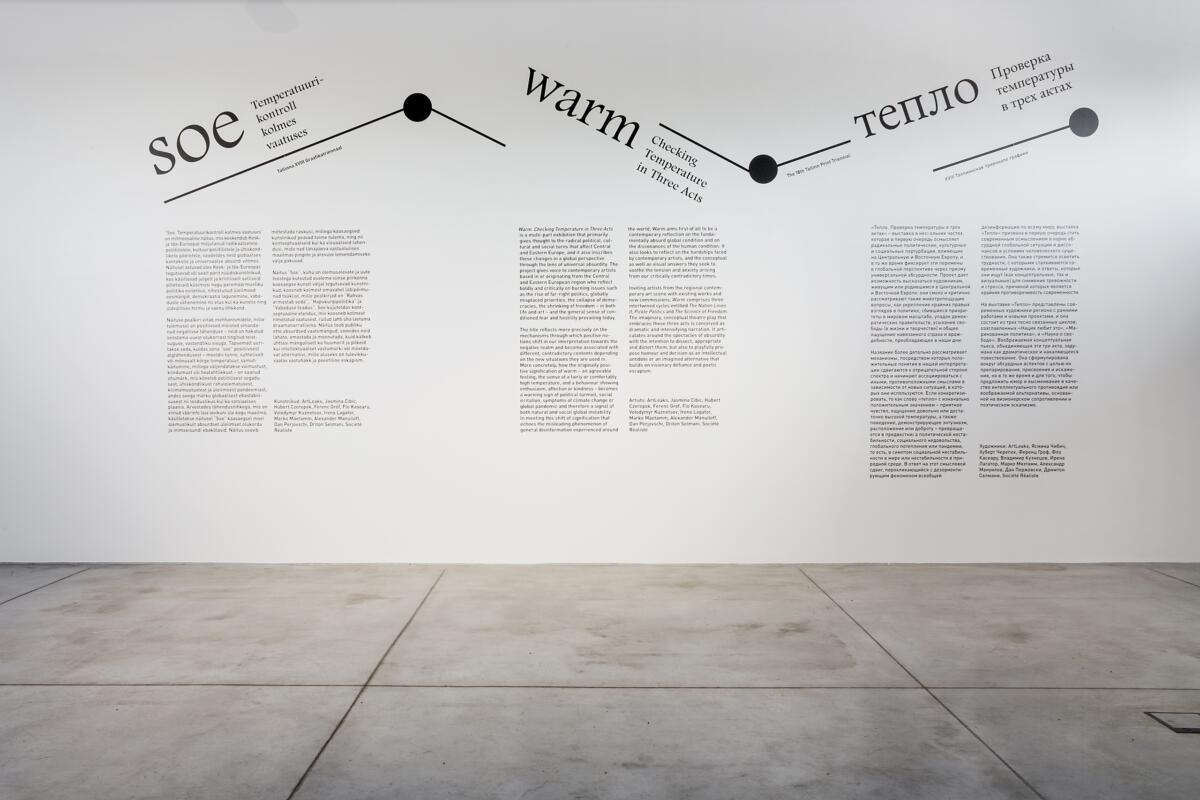 Róna Kopeczky (1983) is a curator and art historian based in Budapest. She worked as a curator for international art in Ludwig Museum Budapest between 2006 and 2015, where she mostly focussed on the site- and situation-specific practices of young and mid-career artists from the Central Eastern European region. In February 2015, she joined acb Gallery in Budapest as artistic director. She participated in the organisation of the first OFF-Biennale Budapest from the beginning of 2015 and was a member of the curatorial team for its second edition held in autumn 2017. Róna Kopeczky is the co-founder of Easttopics, a platform and hub dedicated to the contemporary art of Central Eastern Europe that is based in Budapest. She holds a PhD in Art History from Paris-Sorbonne University. 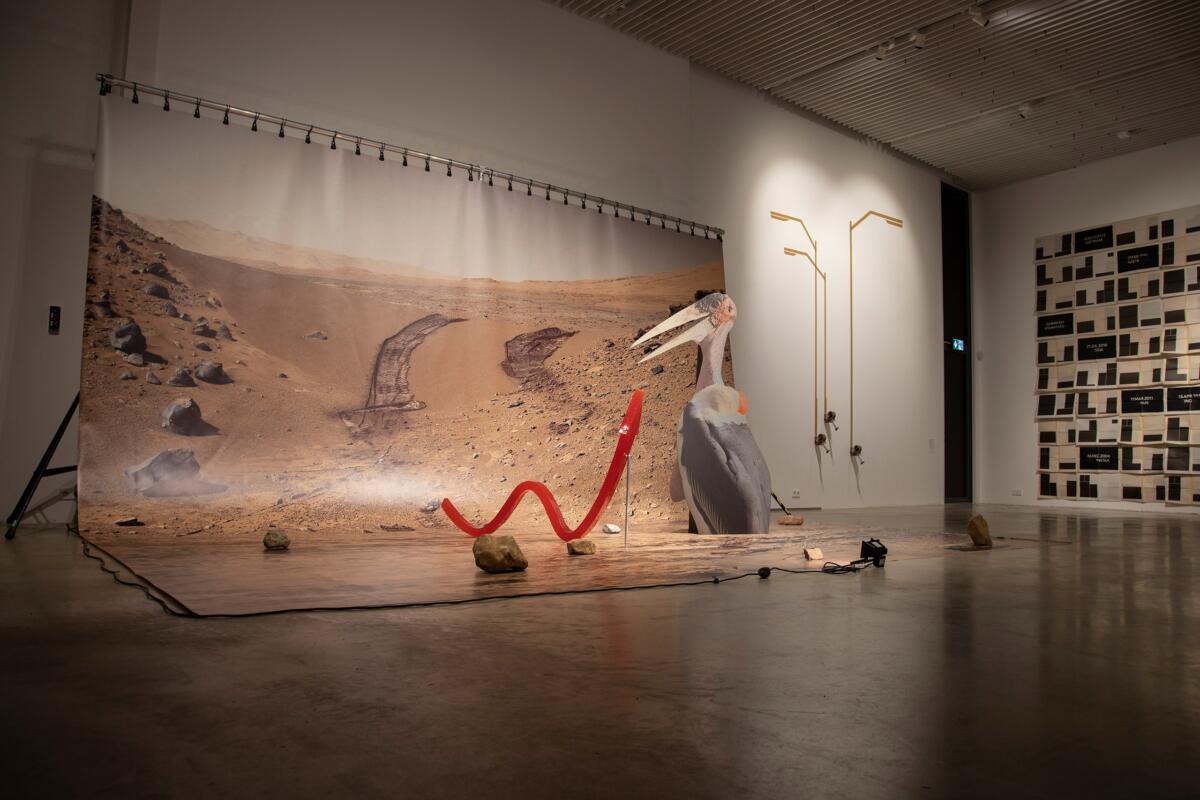 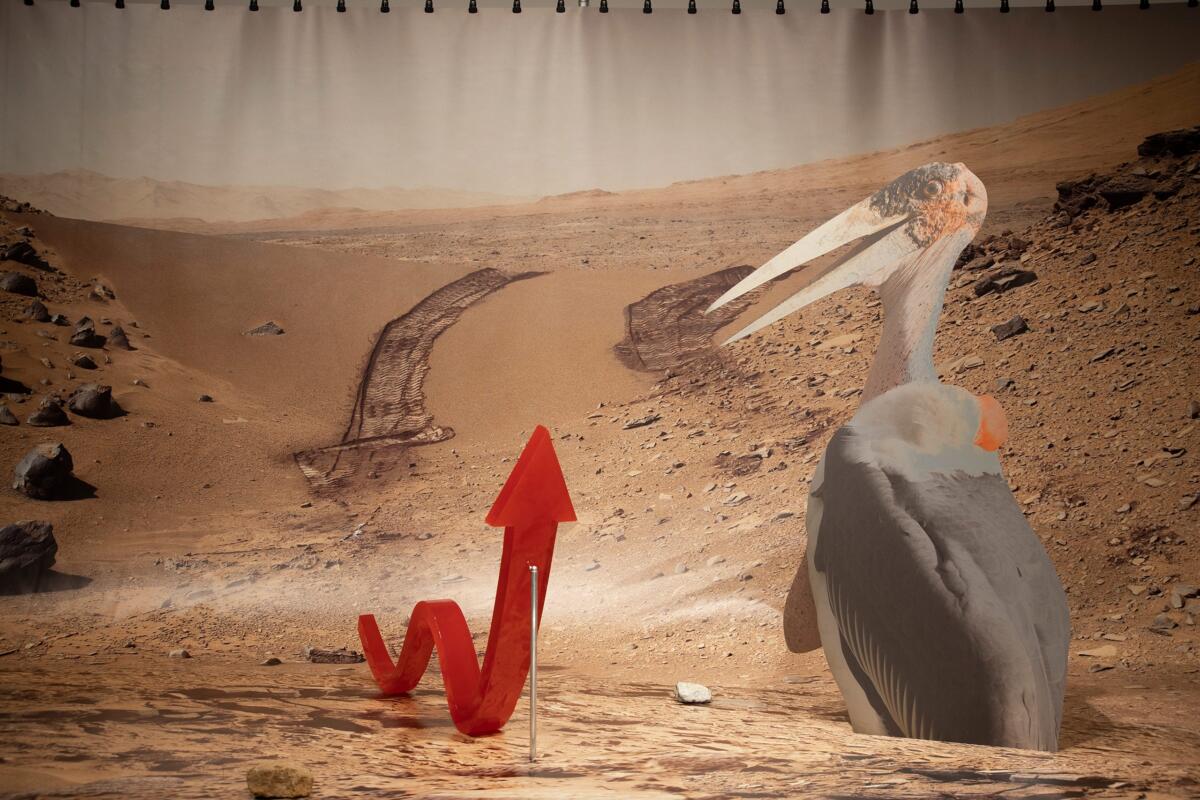 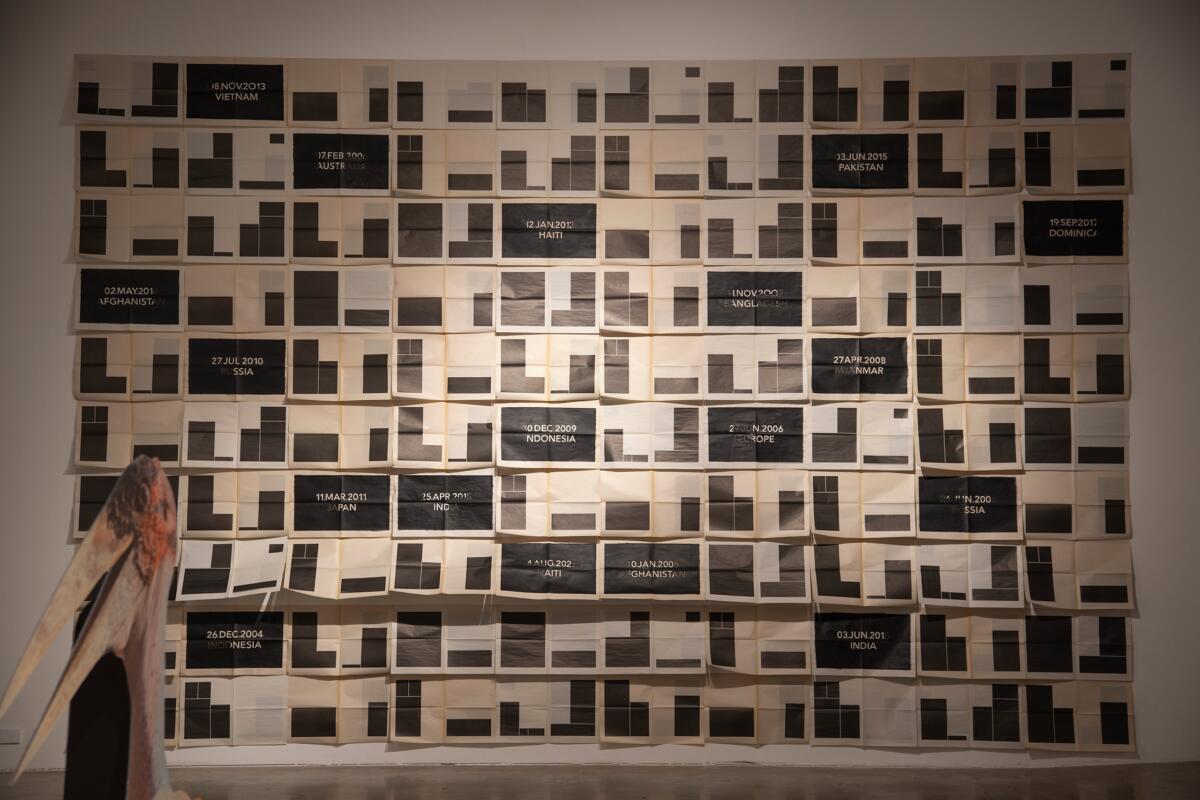 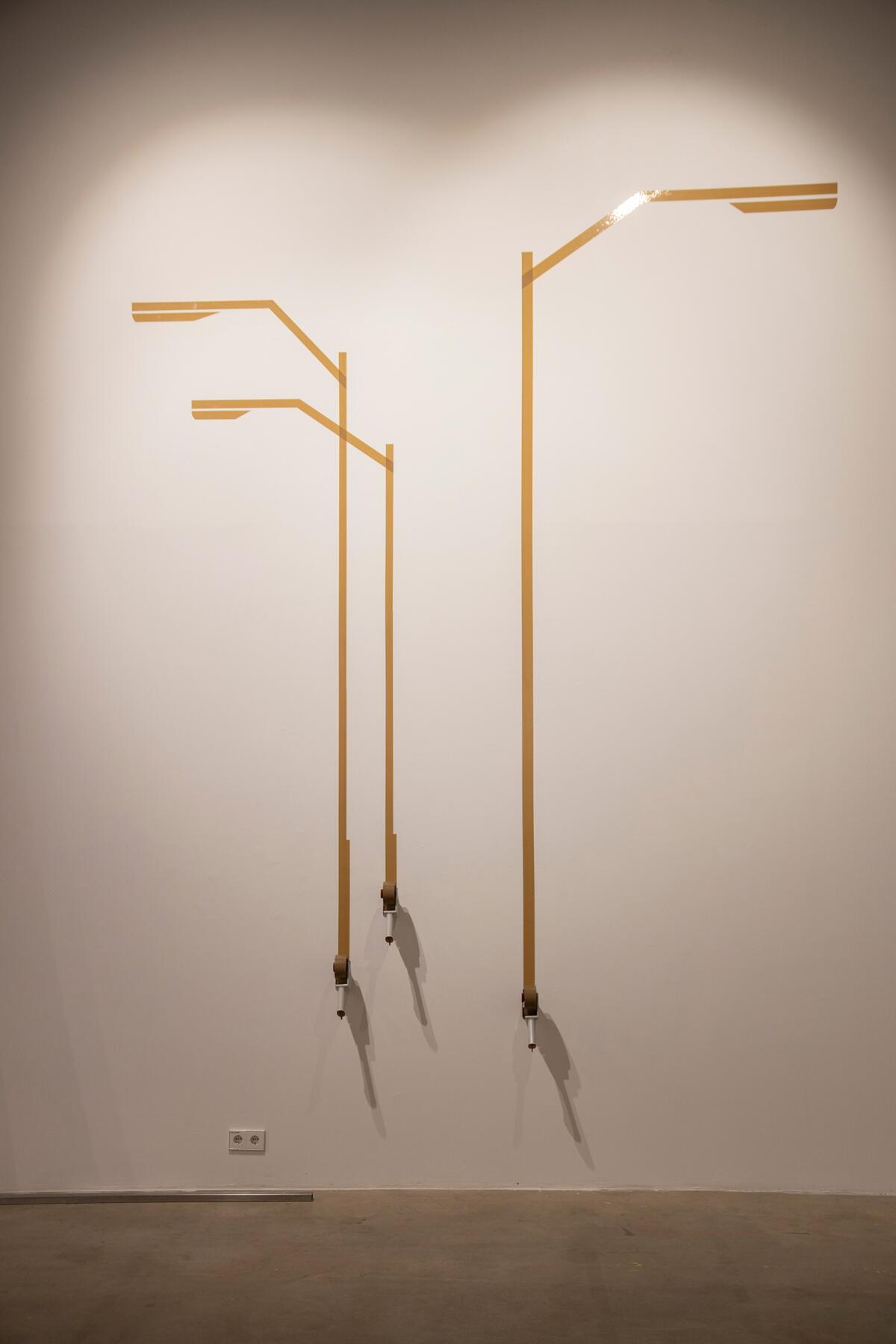 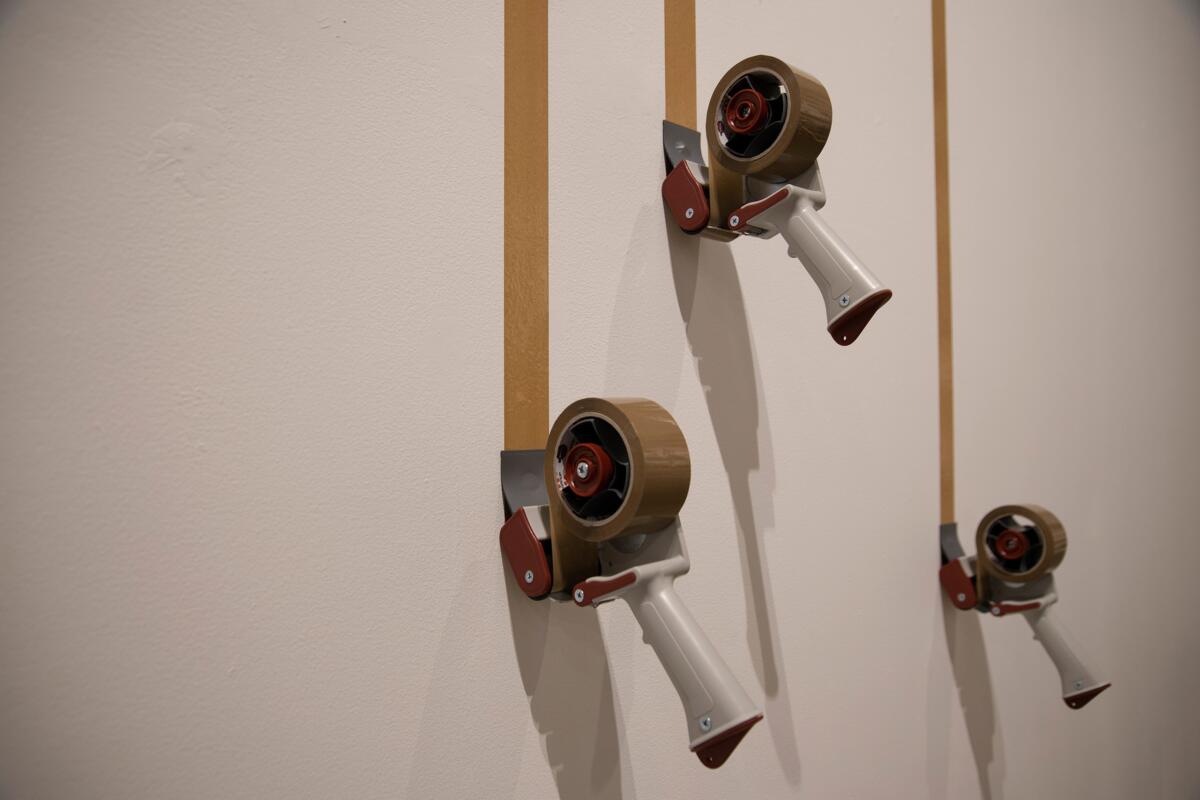 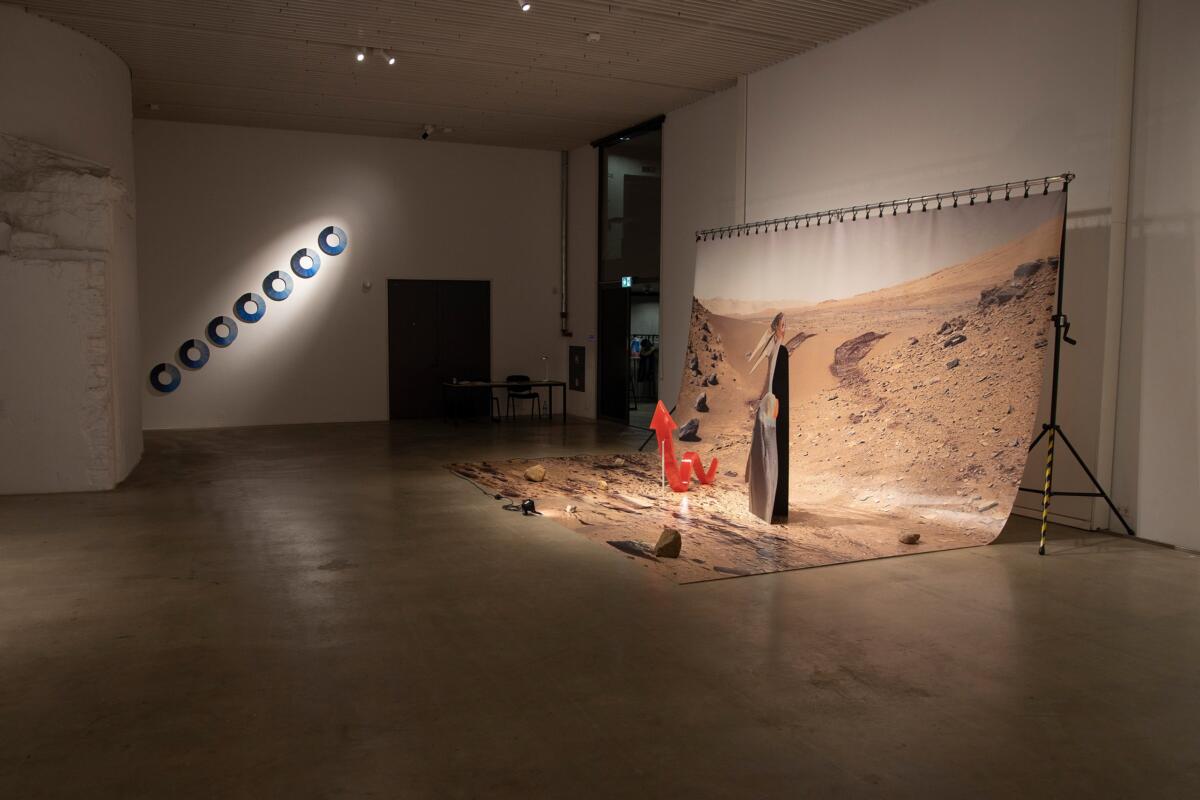 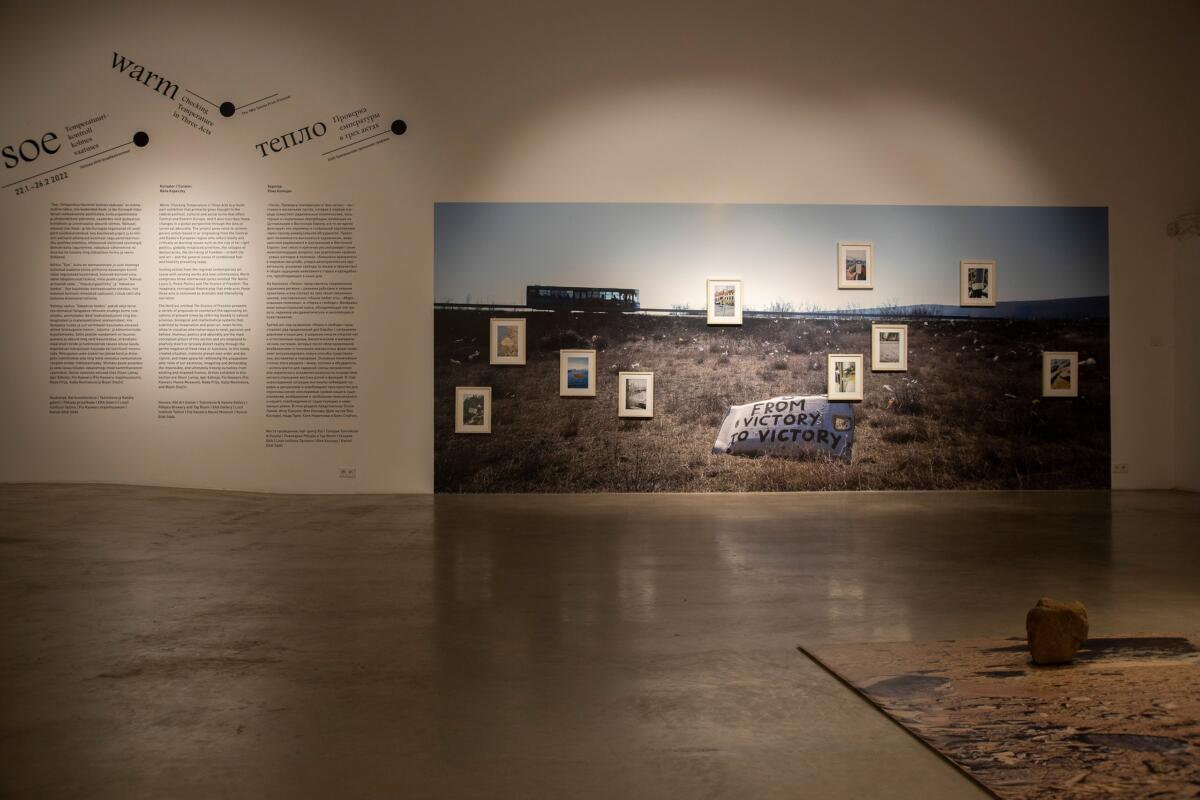 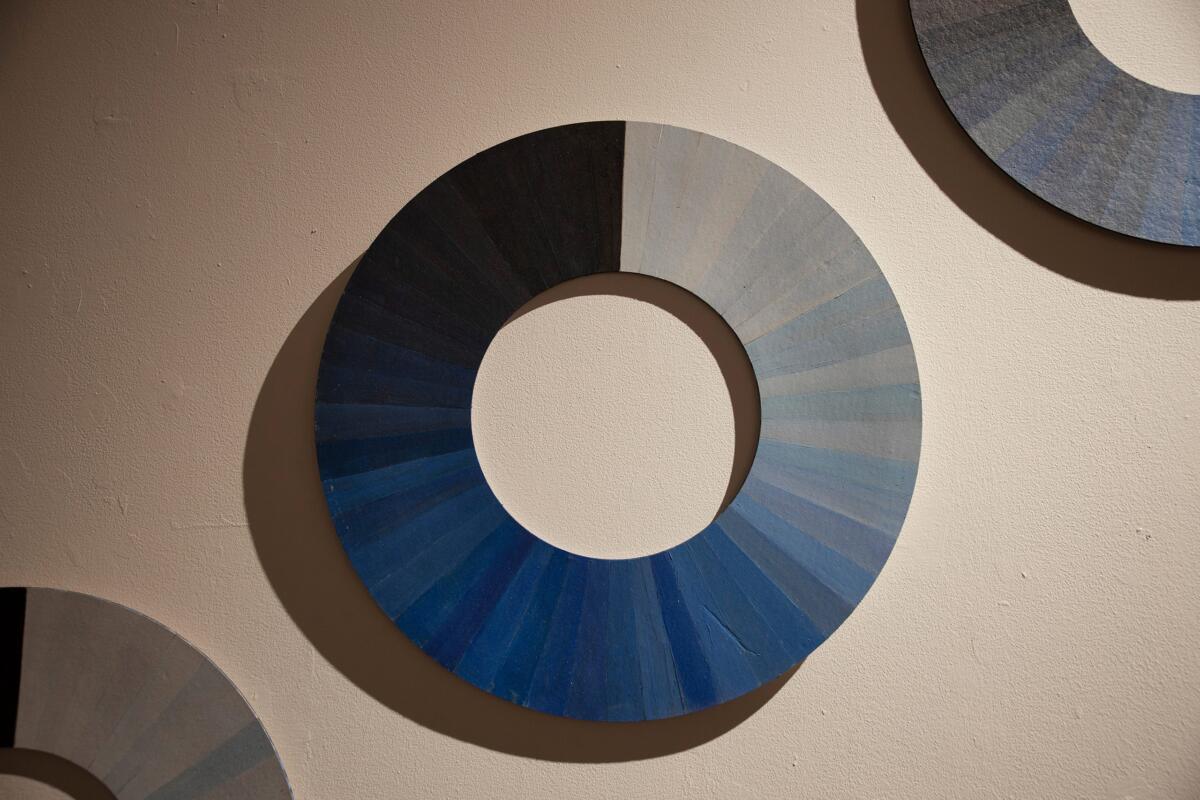 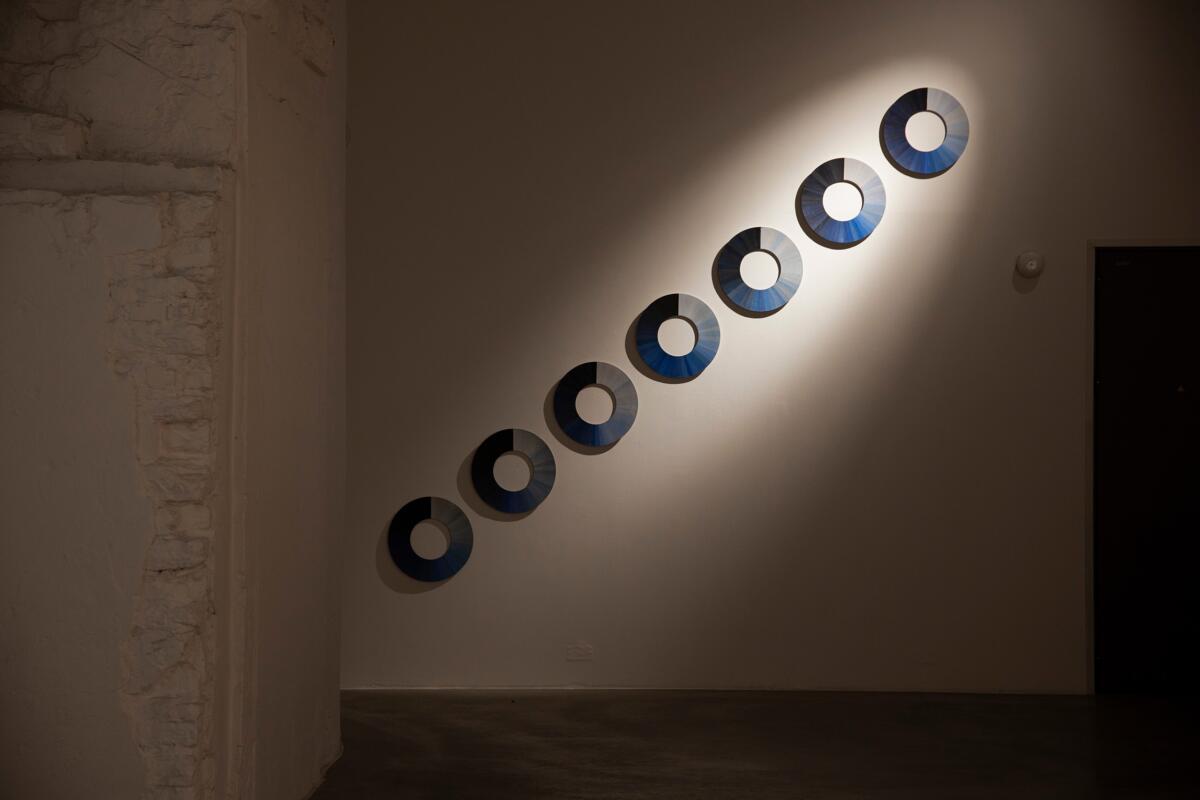 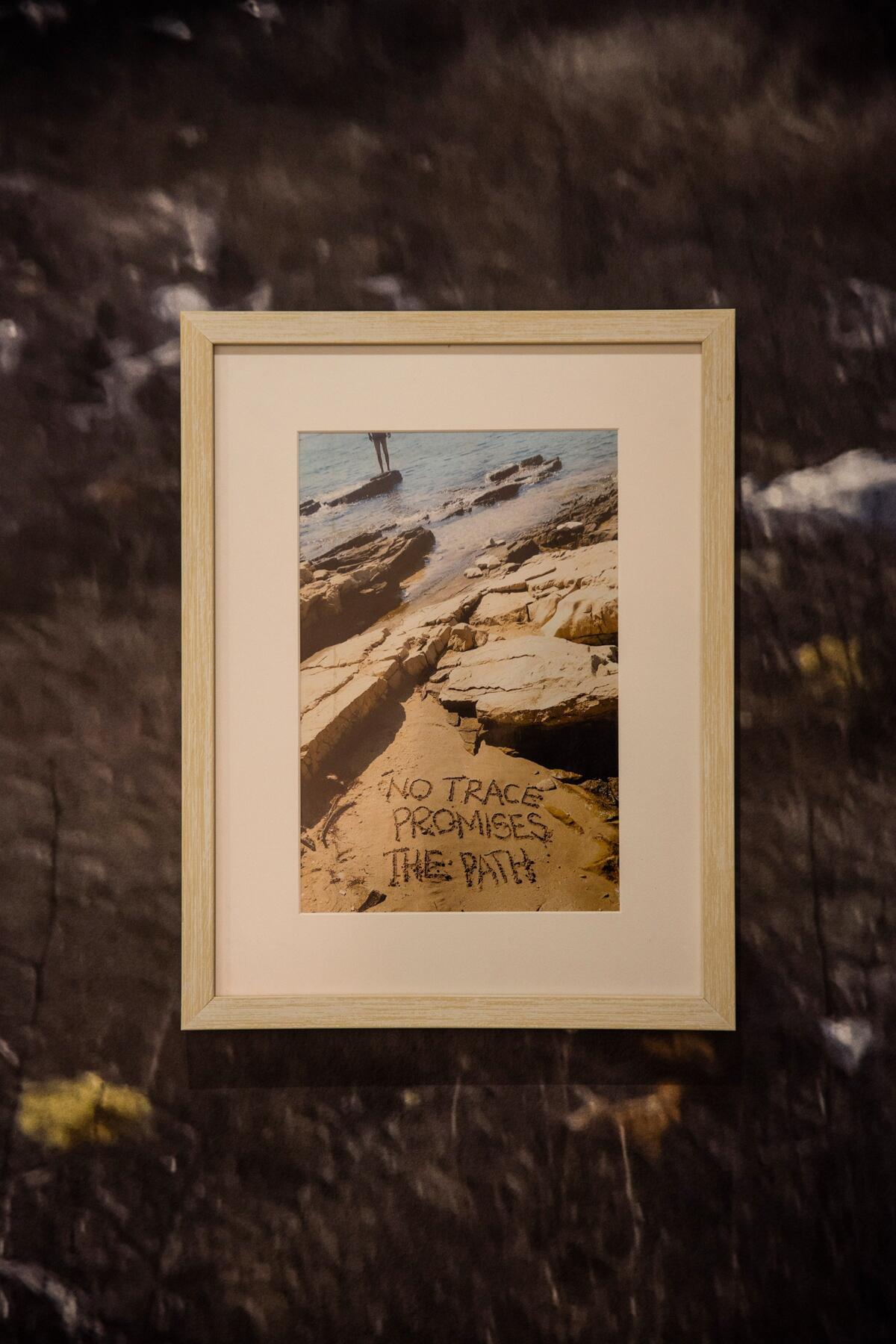 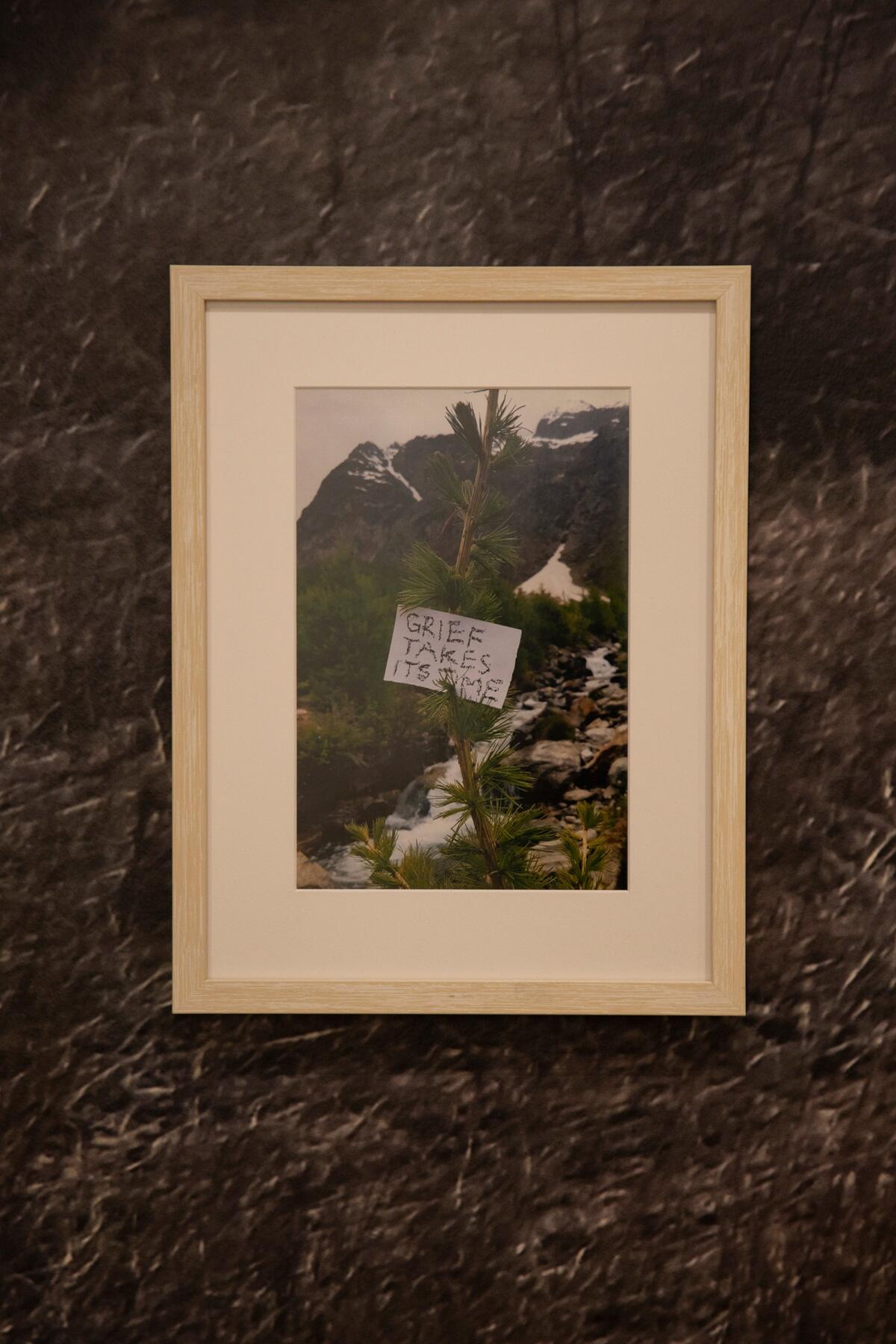 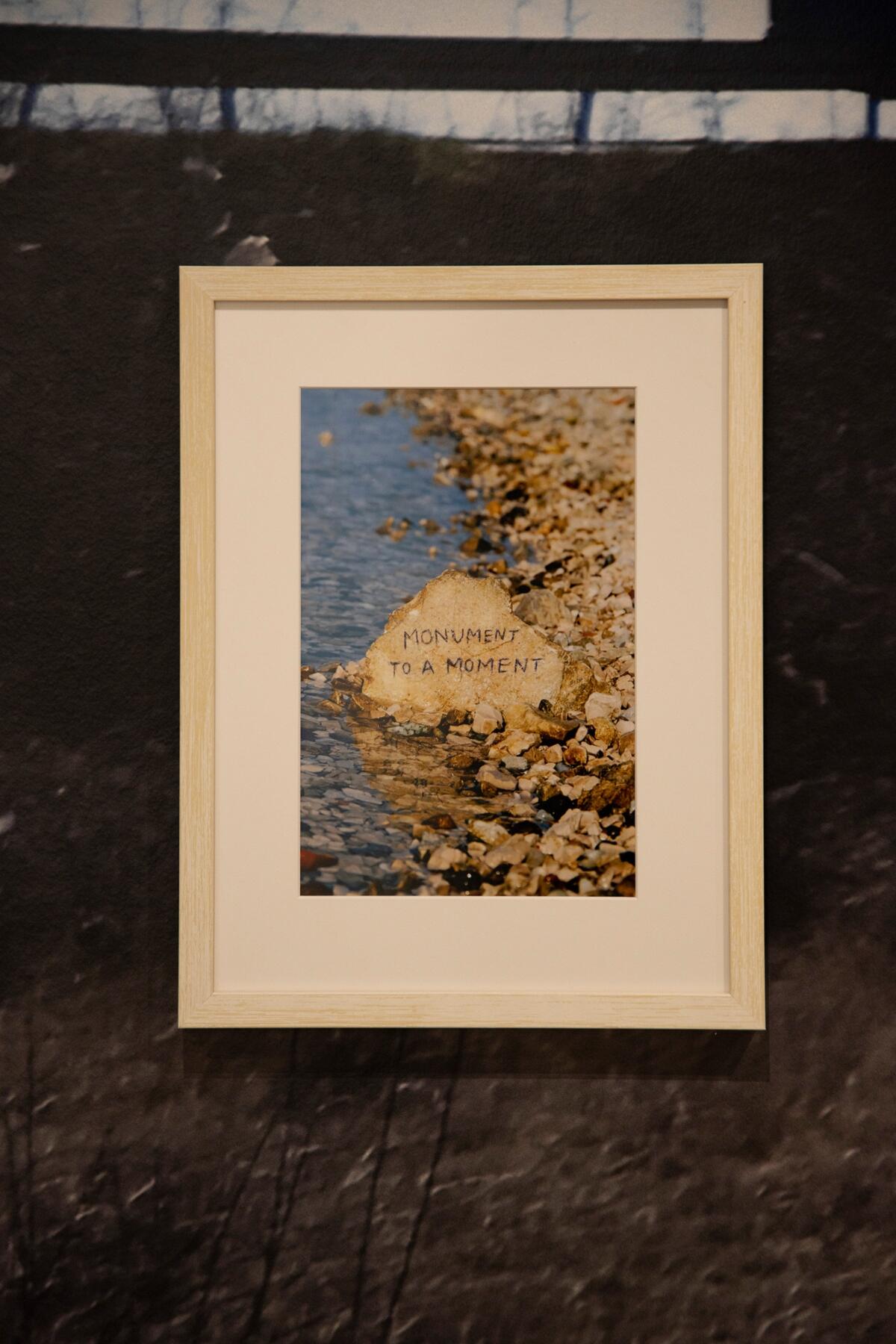 [1] Joseph Beuys interviewed by William Furlong and Michael Newman at the Victoria and Albert Museum (1983).