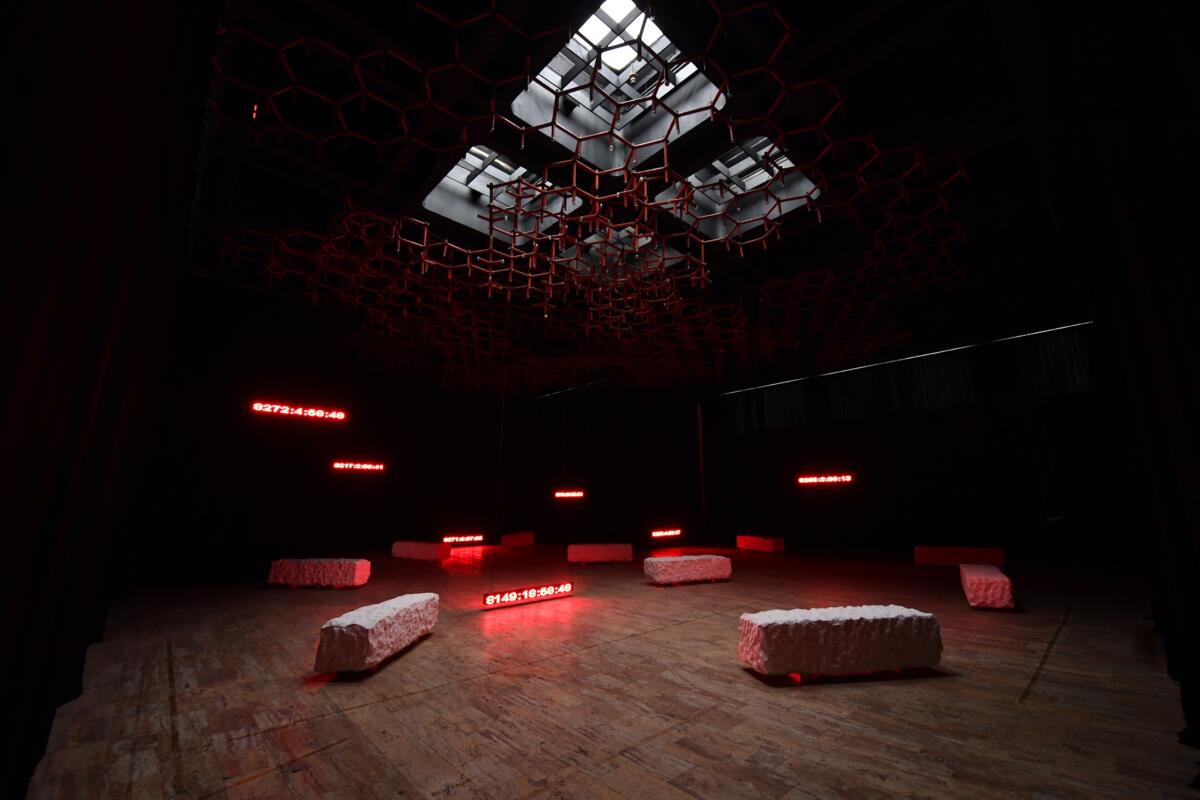 This exhibition commemorates the 1622 persons who disappeared during the war in Kosovo and the immediate aftermath, including the years 1998 and 2000. It comes at a time of denouncements and the discovery of long suspected mass graves in the territory of Serbia.

‘The grave is better than not knowing’ is an excerpt from a conversation with Kumrije Jahmurataj, one of the many relatives of the disappeared still waiting for their loved ones. This phrase echoes just as mournfully as the indefinite wait of family members, which takes the shape of a macabre hope.

The details of the 1622 persons revealed in this exhibition are not the details of missing or disappeared persons, but rather the details of people who were abducted, made disappear by force, executed and hidden in mass graves, which, over the course of more than 20 years since the crimes were committed against the people of Kosovo, have been obscured, thus making the search and, as a result, their discovery, more and more complicated.

Grass has overtaken the soil where the traces and proof lie. 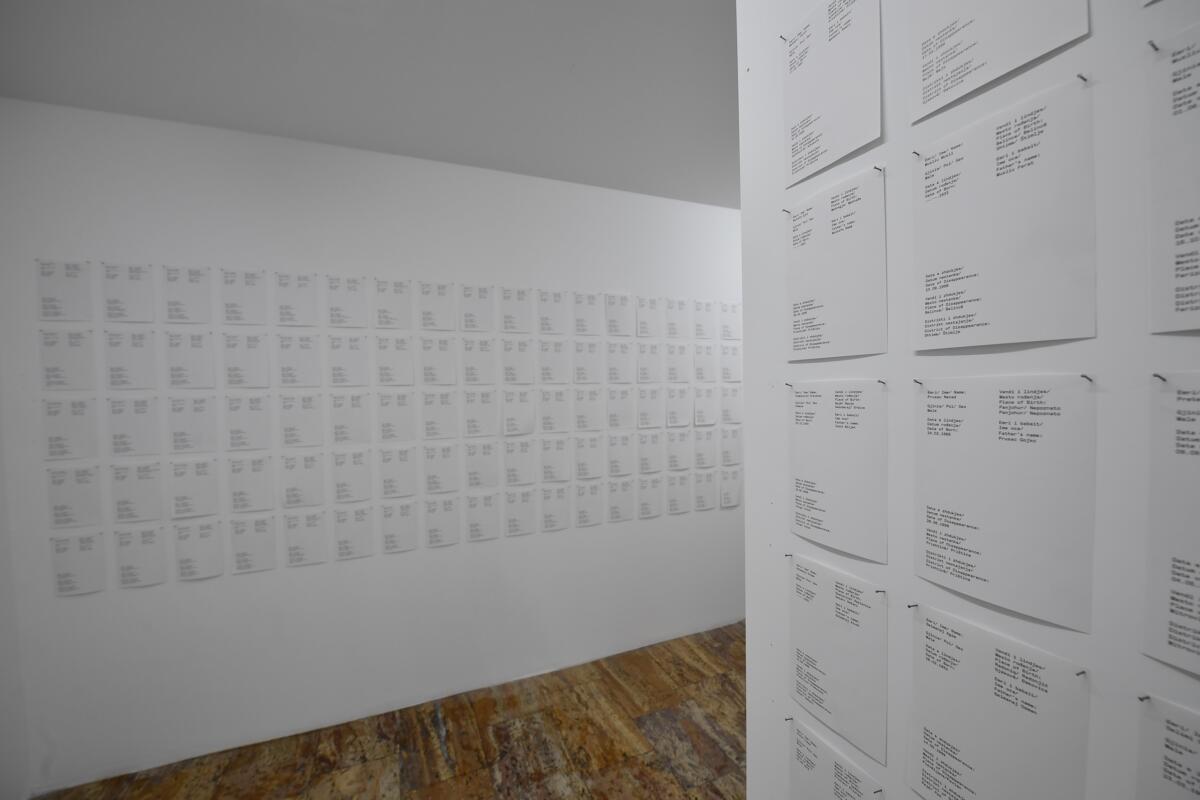 Within the space that shapes its outlines, this exhibition takes over a difficult role; due to a multitude of gaps and absences, it becomes a temporary grave that does not contain a human, but only his or her memory.

The past always comprises absence, first an absence of presence, and it is this very enigma that forms the base for the work of artist Driton Selmani. The enigma is that of the presentation of the absence, the manifestations of a past that is now behind us, of something that is preserved in memory and is essentially indestructible. Following the thoughts of philosopher Paul Ricœur on “Memory, History, Forgetting,” and adjusting them to the context, we see that “the trauma remains even though it is inaccessible, unavailable. In its place arise phenomena of substitution, symptoms that mask the return of the repressed” and that “in particular circumstances, entire sections of the reputedly forgotten past can return” (P.R 2004).

While material traces and physical memory in the form of documents and archives, in the form bodies, flesh and bones are degradable and unidentifiable and, as a result, lost, the traces imprinted on the cerebral cortex, which manifest as memories, perceptions or a reawakening of the unconscious, manage to survive. And it is precisely to this memory that the artistic intervention is dedicated, to the indestructible living memory of those who do not forget.

In fact, the stones and the time of the installation merge with each other’s mission, becoming equivalents. A stone is, in essence, a multitude of elements and minerals that, together with time, allow for the formation of petrological mass. 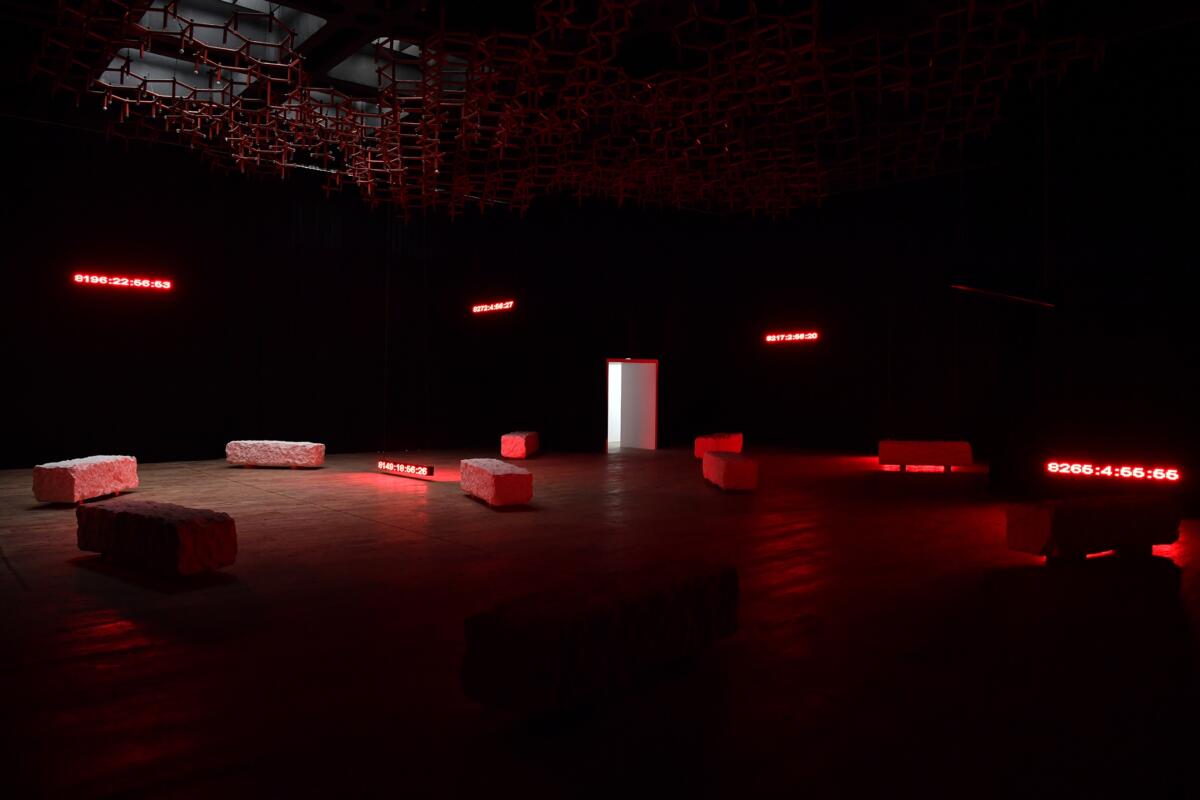 Stones are, much more than anything else, witnesses of time, because they themselves contain it, while time is a witness and steward of every layer of this petrological mass. These two elements also contain the disintegrated shards of this barbaric humanity where the shared civilian body remains the final battlefield of modern conflicts.

The amnesty tendered from time to time by international and local institutions during the past two decades has led to episodes of collective amnesia, which remains eternally unresolved. It is a structured act of forgetting, with a layered bureaucracy that extends to all levels of everyday life, killing the victims anew and annihilating the disappeared over and over again. And finally, forgetting that the family members and loved ones of those forcefully disappeared, who live their lives seeking and waiting for answers, are the real victims. They resist with the strength of these stones while also waiting for a stone, that is, resolution, a cure for their indescribable anxiety and the possibility to weep over the grass that will sprout.

According to the most recent data from the International Committee of the Red Cross, the number is 1622. Date: October 11, 2021. 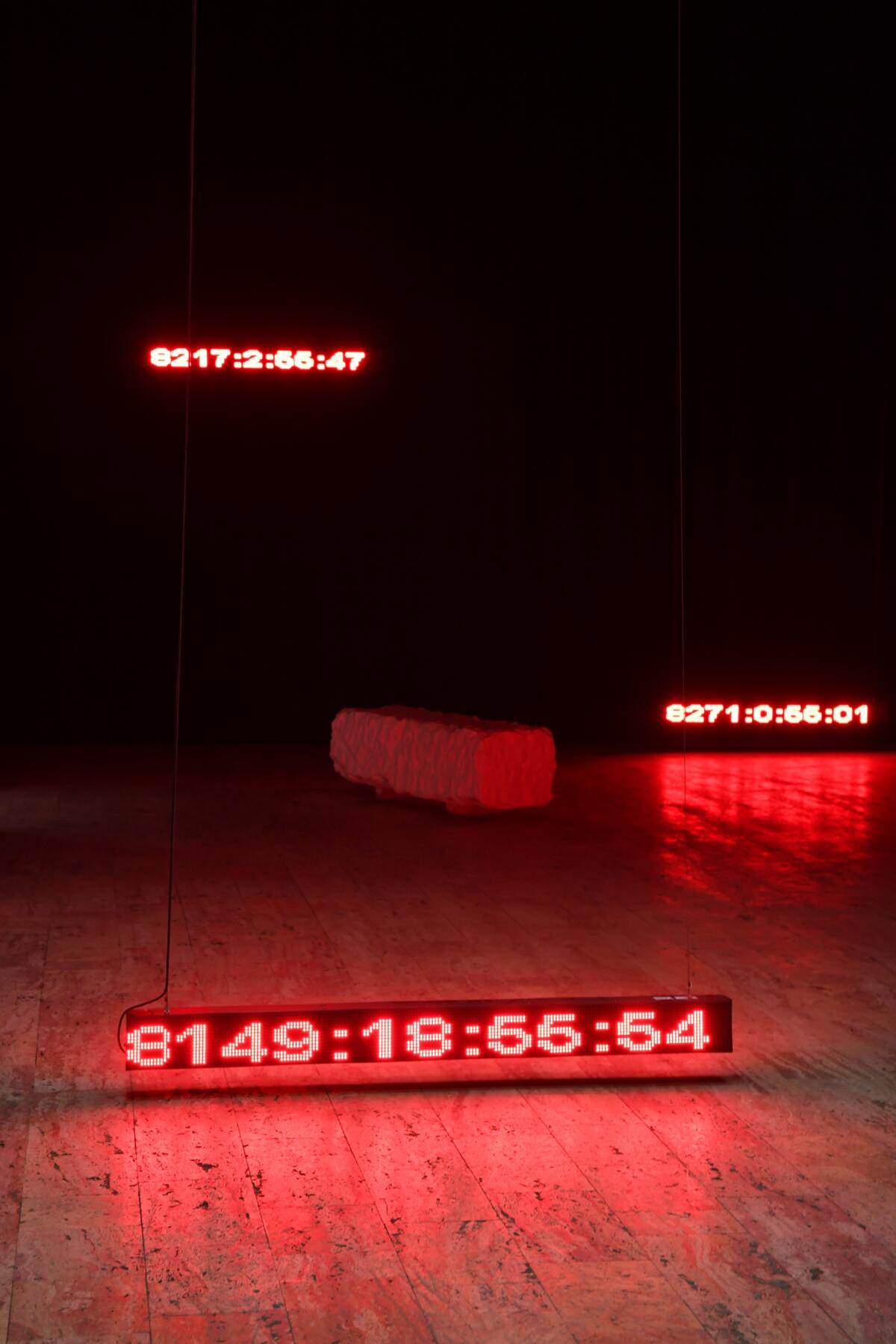 Humanitarian Law Center Kosovo (HLCK) since 1997 documents the victims of war crimes and other gross violations of human rights. All HLCK activities relate to the field of Transitional Justice and contribute to the achievement of justice for victims, establishment of accurate narrative about the war, supporting families to realize their right to reparation and education of youth in the field of Transitional Justice. Recently, HLCK is also contributing to the memorialization of victims of war.

Kosovo 2.0 is a pioneering independent media organization that engages society in insightful discussion. Through print and online magazines, debates and advocacy initiatives, K2.0 is dedicated to deepening the understanding of current affairs in Kosovo, the region and beyond, raising a voice for human rights in different spheres.

It has been difficult for me to work on an exhibition on this immense tragedy, which has often been misused, neglected and forgotten. For me as an artist, it was very hard to take on the role of interpreting and translating the tragedy of others into a work of art.

The exhibition contains absence as oblivion, memory as a concern over forgetfulness, and finally a resting place, where visitors can feel the presence of absence, that is the emptiness of existence –  which is not life, but rather the passing of time.

This work is a result of a multitude of absences. The past itself is an absence: the work deals with this absence of presence. At the same time, it tries to show it, to show the presence that is no more, and which exists only in the memory and memories of the relatives of the missing.

In this context, the exhibition itself wants to be a tomb, where through a long corridor are crossed the names and the few data of the 1622 people still missing, ending in a dark space where the work of the artist Driton Selmani is exhibited. There, stones that resemble caskets and clocks still counting the minutes from men and women’s disappearance turn into a memorial for the victims.

We cannot forget that family members who are still waiting are also victims, for whom no one cares enough. They are the ones who preserve the memory forever. While the physical archives in the form of  bodies, documents, data and traces on the crime scenes have been destroyed and lost, the memory is the only one that can survive.

The issue of missing persons is as serious as it is complex. For the past year, I have been researching what really happened during this process – from the war until now. I was disheartened to see that, over the years, the many institutions that were responsible for clarifying the fate of the missing have not always worked seriously, nor have they treated this issue as a matter of priority. What is worst, they have left families aside, who have been waiting for information, for justice and for closure for more than two decades. It is astonishing to think that the issue of missing persons has been included in the political dialogue between Kosovo and Serbia only recently, more than 20 years after the war. Families have a fundamental right to know.

The report stemming from this research, which HLCk will publish soon, will highlight some of the mistakes and shortcomings of this process along the past 20 years.

Beside a lack of political will to vigorously address the issue, and the perdurance of narratives around missing people that focus on chauvinism as opposed to the universal truth of human rights, there is also a lack of public memorialization. There is little interest from institutions to take up the spiritual and emotional burden of this loss, as a collective exercise of mourning and respect.

This is where art, such as this exhibition, can play a role. First, as a way to raise awareness on this issue – promoting  a perspective that reminds us of the common dignity of the missing, and acknowledging the same injustice and pain in all families, regardless of their ethnic background. Second, as a first step towards collective memorialization: as institutions and fate do not allow families a grave, we as members of society cannot sit aside. Families of missing people must be assured that the disappearance of their loved ones is not only their private pain, it is also a wound to the entire society, to democracy and to justice. 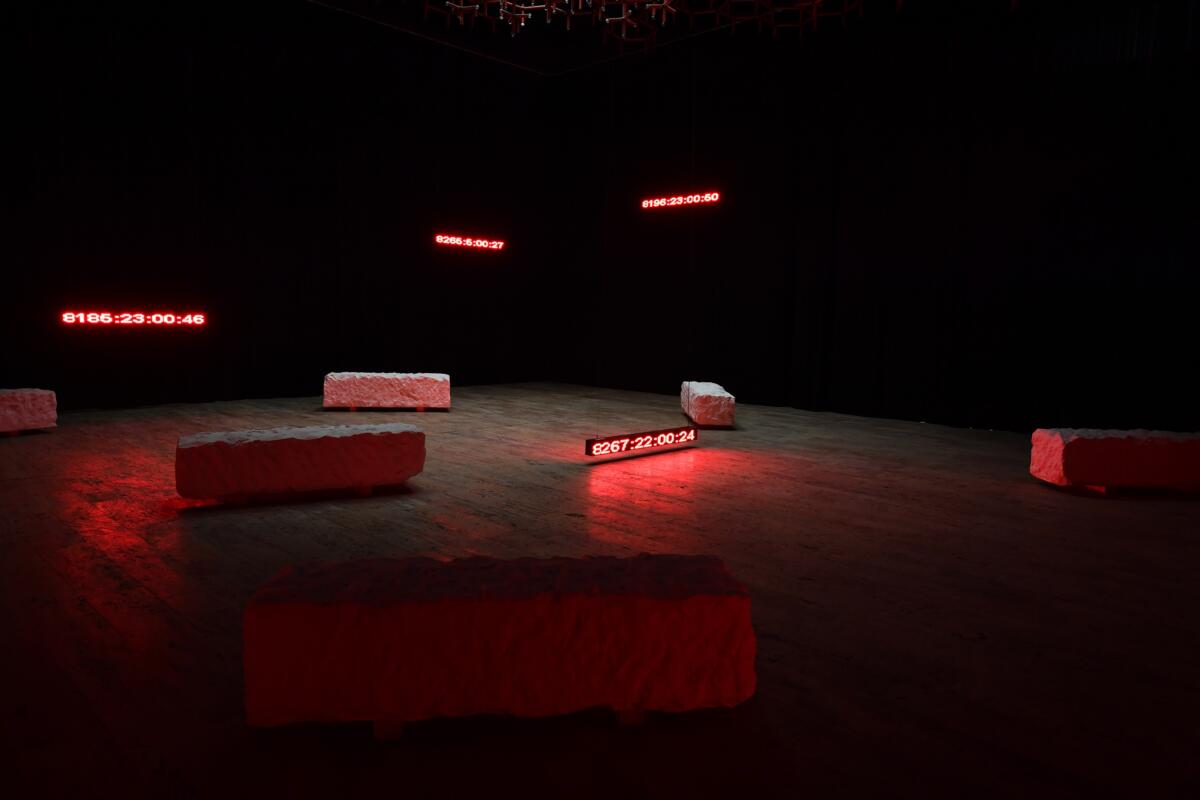 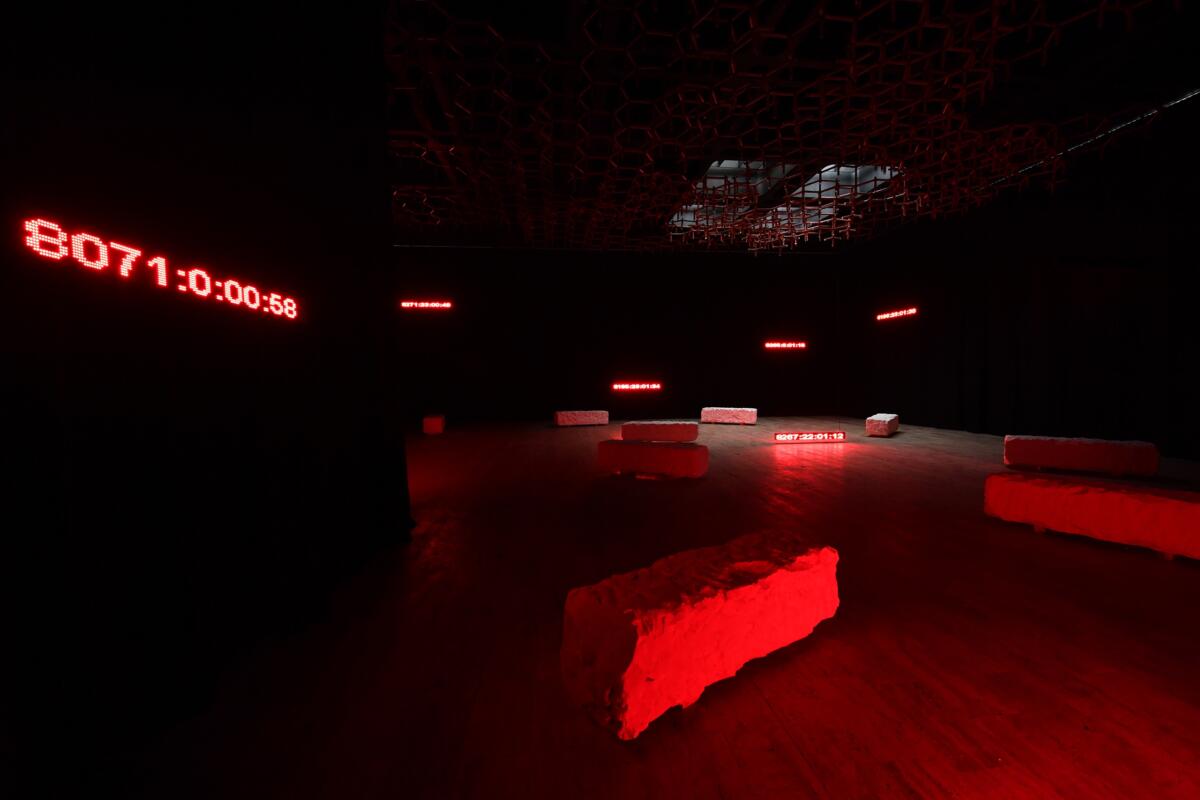 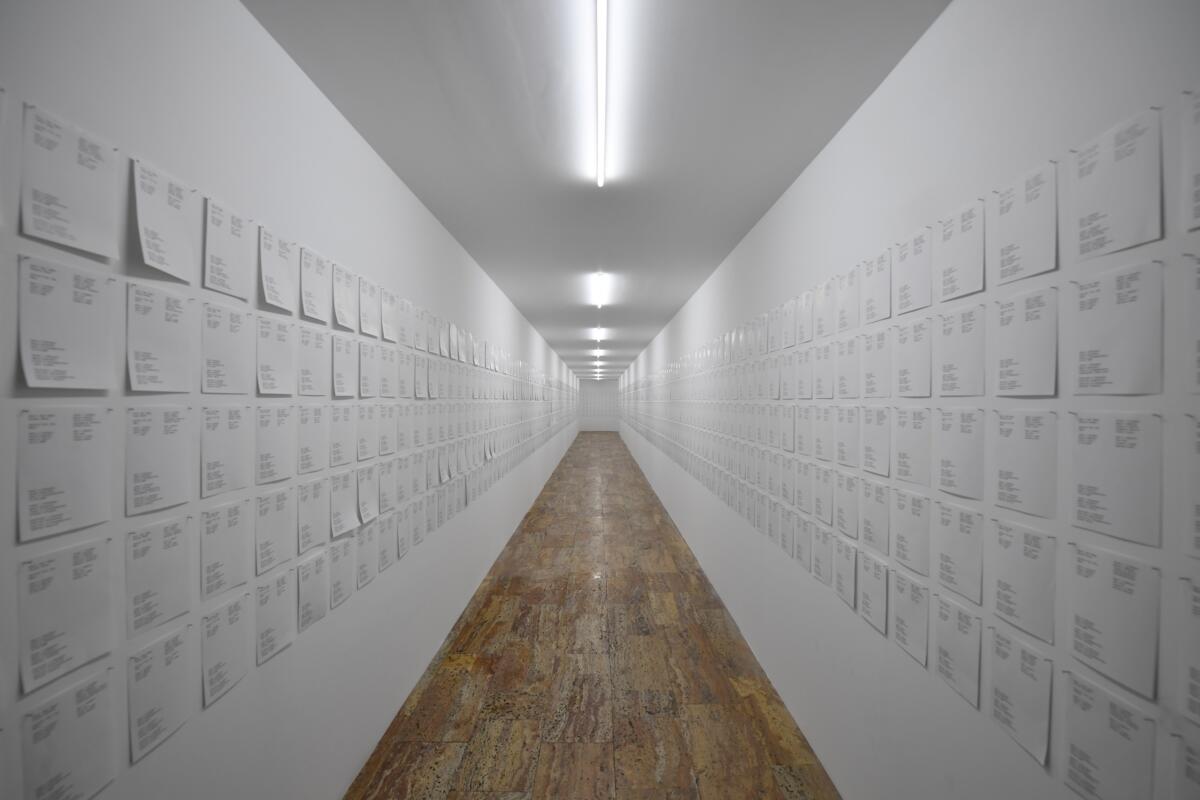 The exhibition has attracted the attention of many visitors, but also of a number of relatives of missing persons.