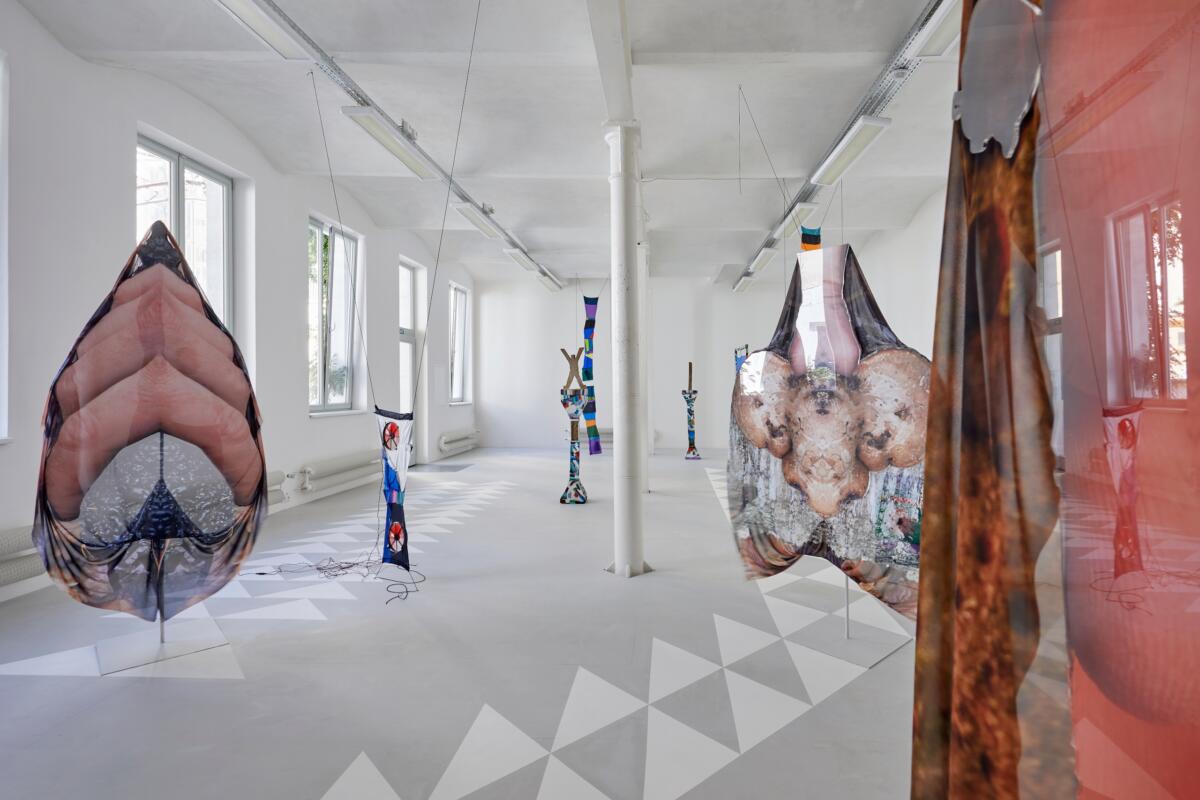 Your hand alights lightly on moss and fern, the axe cleaves deep, don’t run through the forest! Encounter the unknown, without breaking a bone. Another blind step. The images vary, what happened to the year? The days are shortening, the solstice disappearing over the horizon. 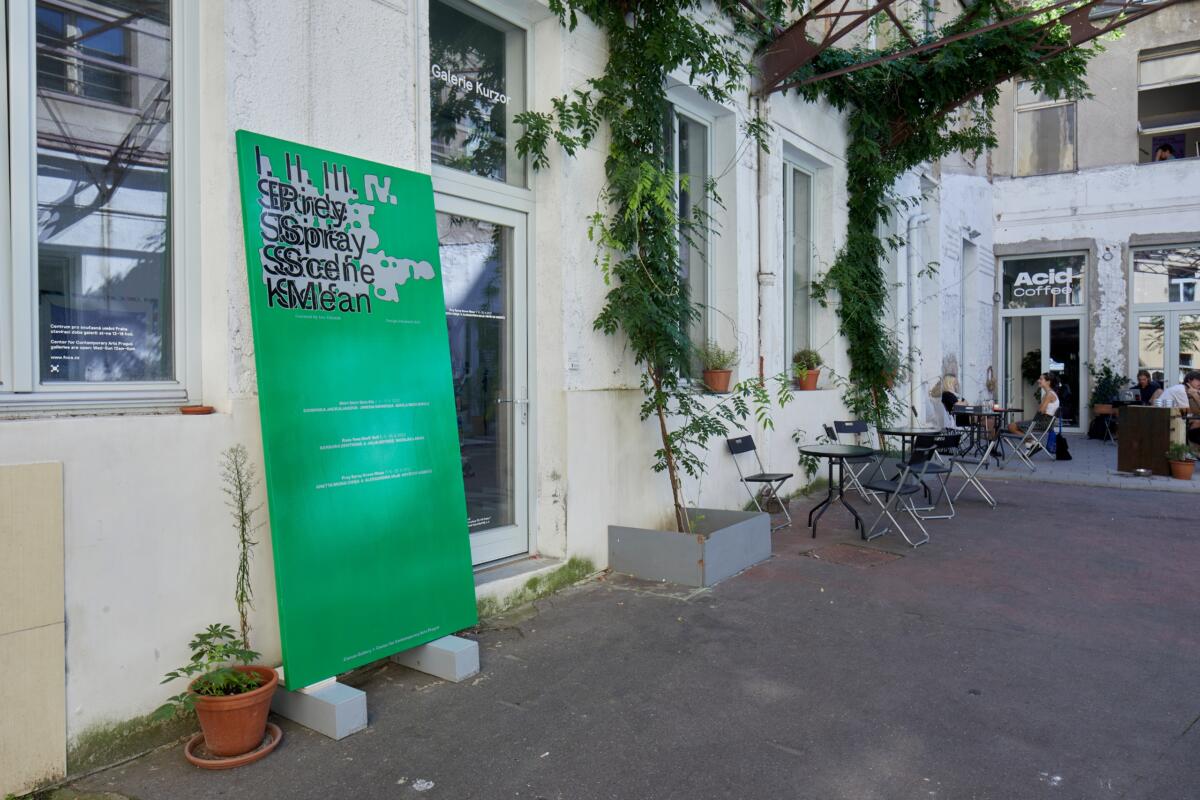 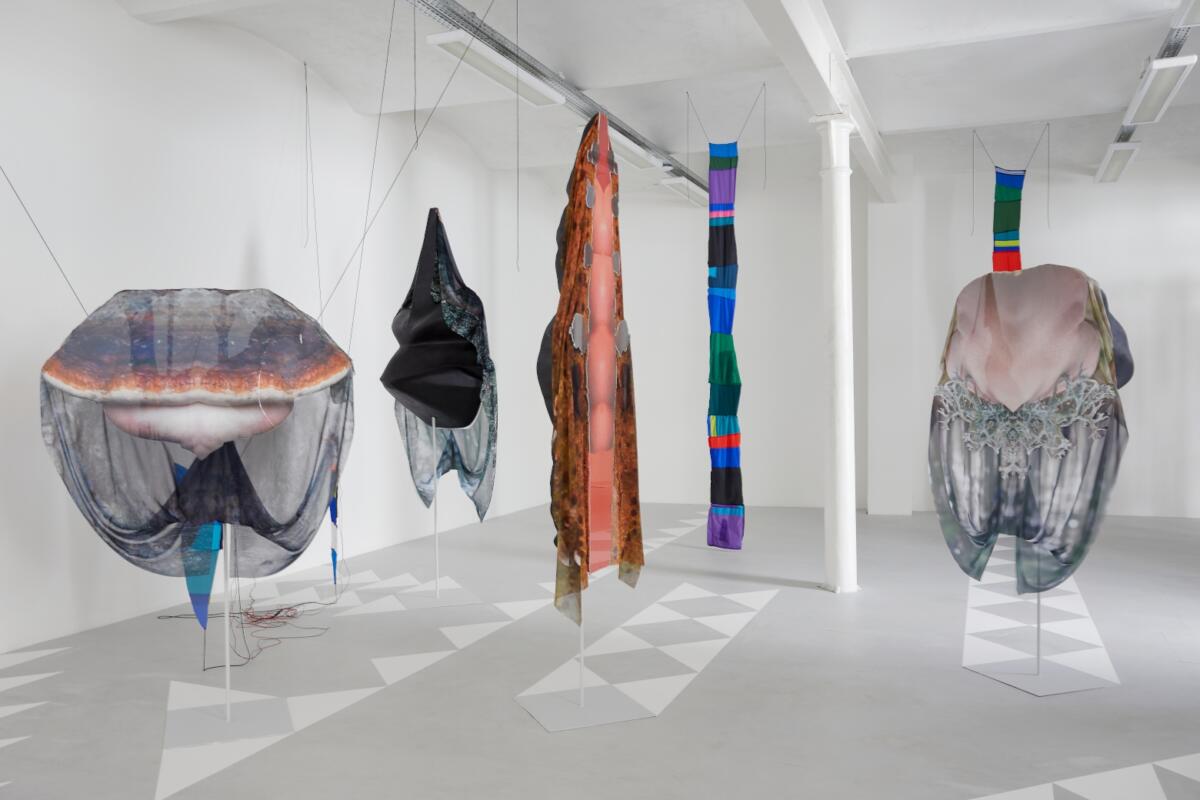 Prey Spray Scene Mean was originally scheduled to open in the first half of July. But one by one we all fell ill and our best laid plans went awry. The exhibition that was supposed to last the longest will now be the shortest, while the time it took to install broke all records. The six weeks spent putting it together confirmed that, although the motif “against nature”, the overarching theme of the year-long programme at the Cursor, works well as a framework for the creation of new works, its openness means we can easily lose track of one another. Concerns as to whether the collaborative nature of the exhibition would work gave rise to texts featuring the archetype of dark night and deep forest in which we forget who we are, lose ourselves and our sense of how others see us, and can enter a spiral of despair. Uncertainty was the state I kept returning to as a starting point, though it took me a long time before I was able to accept it as something productive. In the end, two commonly formulated questions, which I think touch upon something essential to the entire project, helped me take the first steps: What would you give for a chance to venture into the unknown? What would you give for a chance to lose yourself? 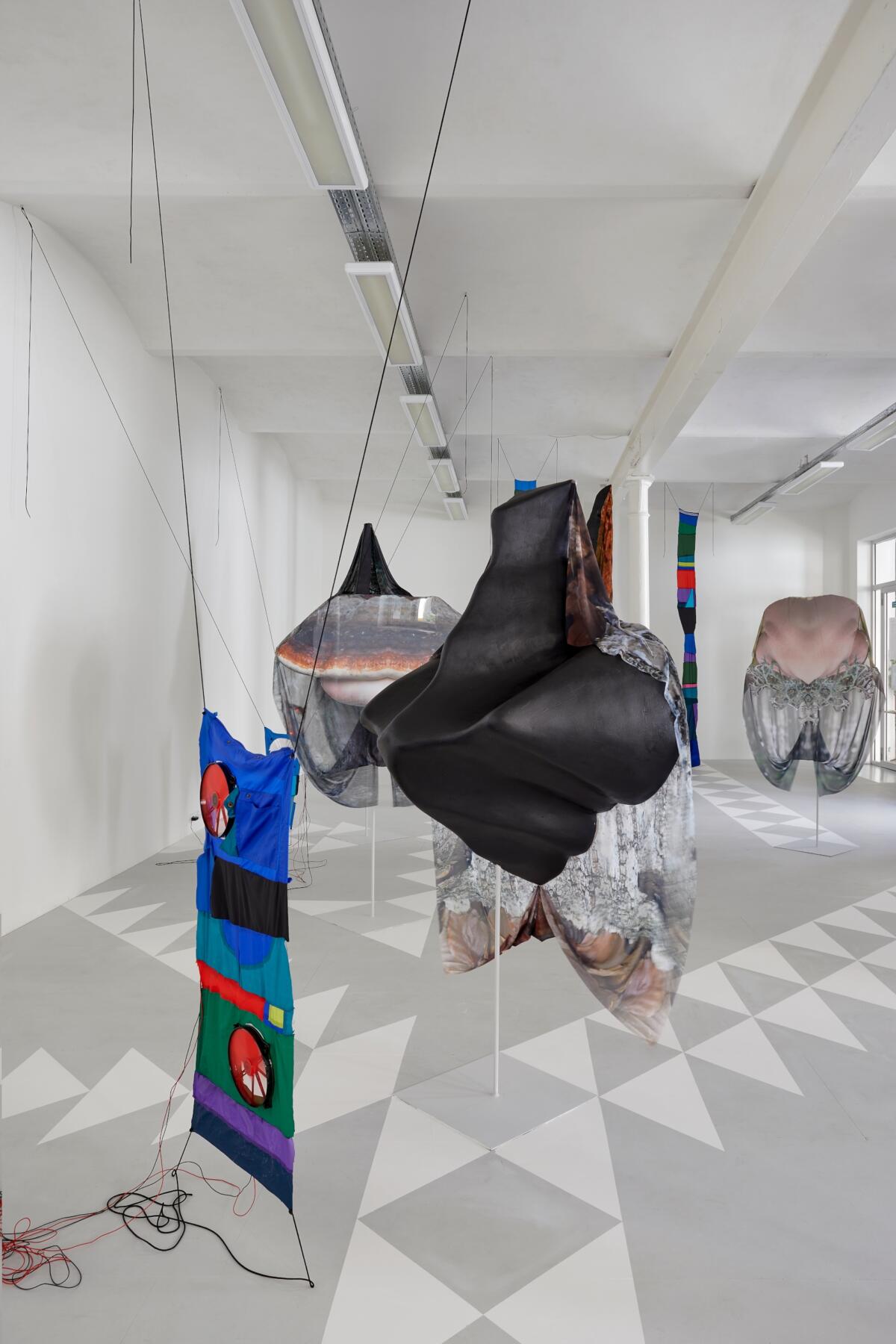 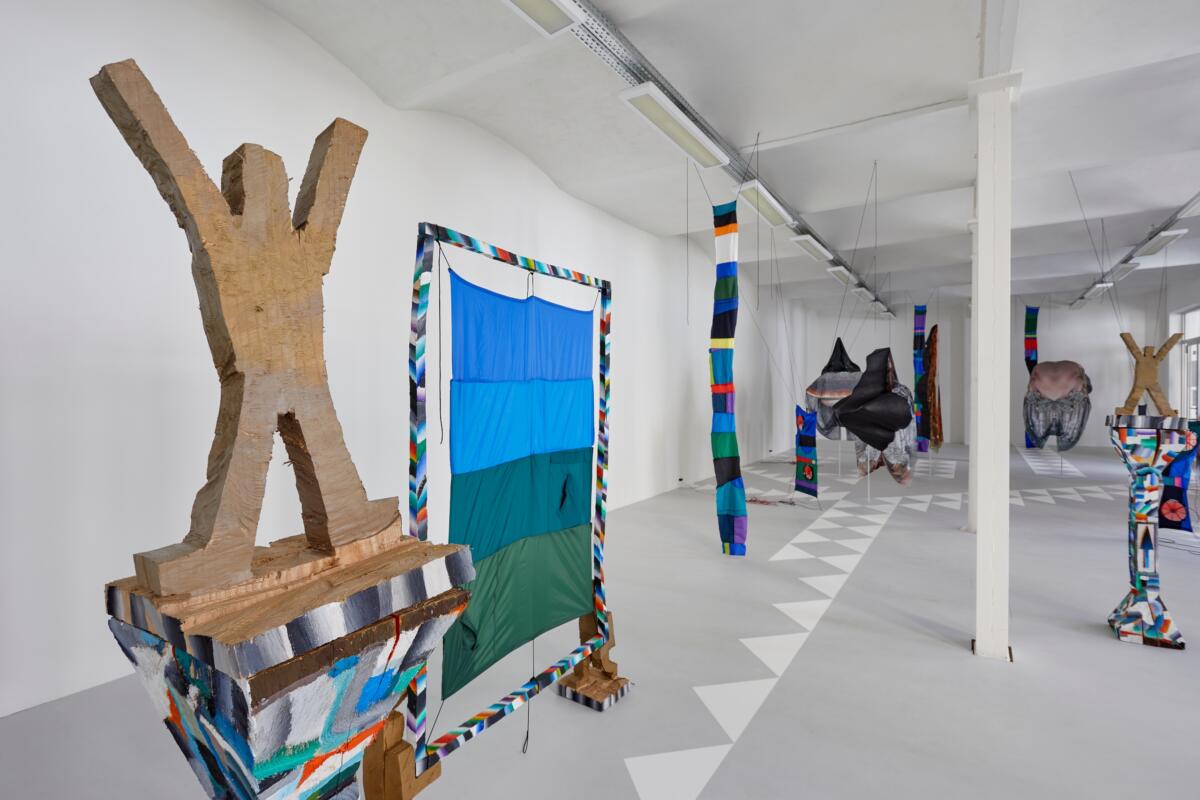 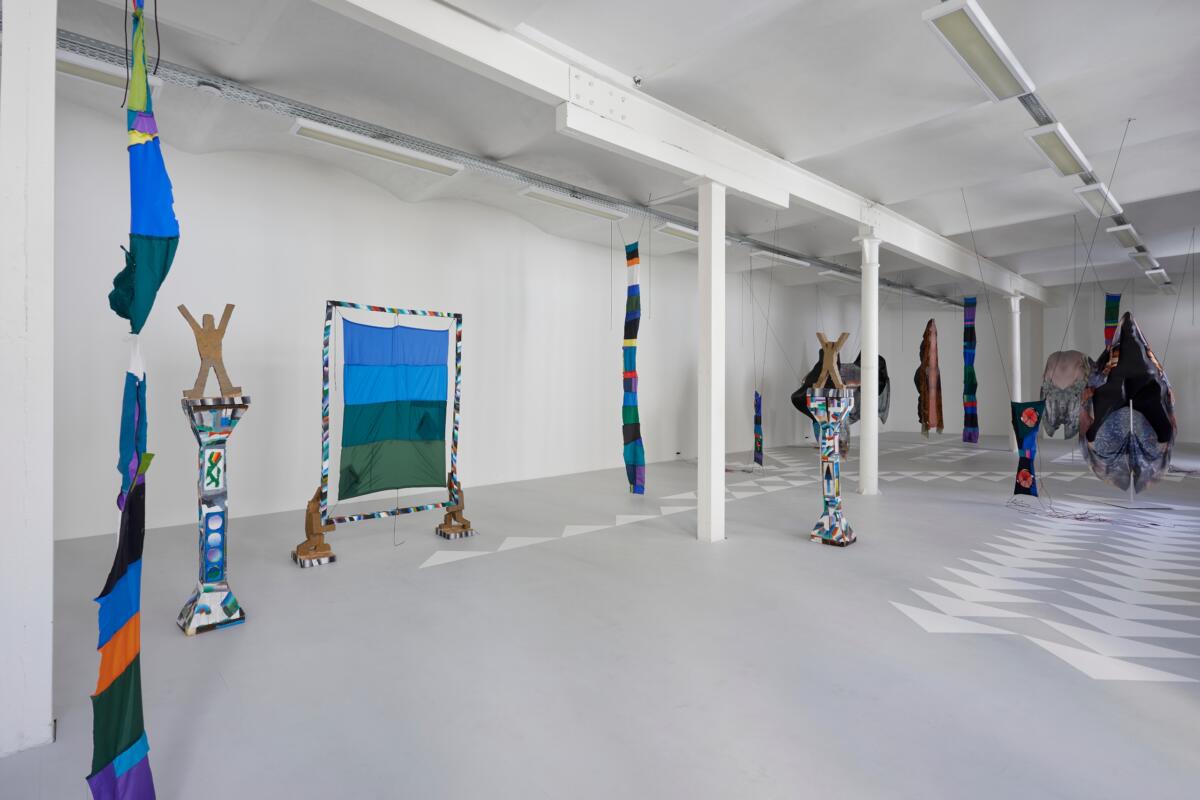 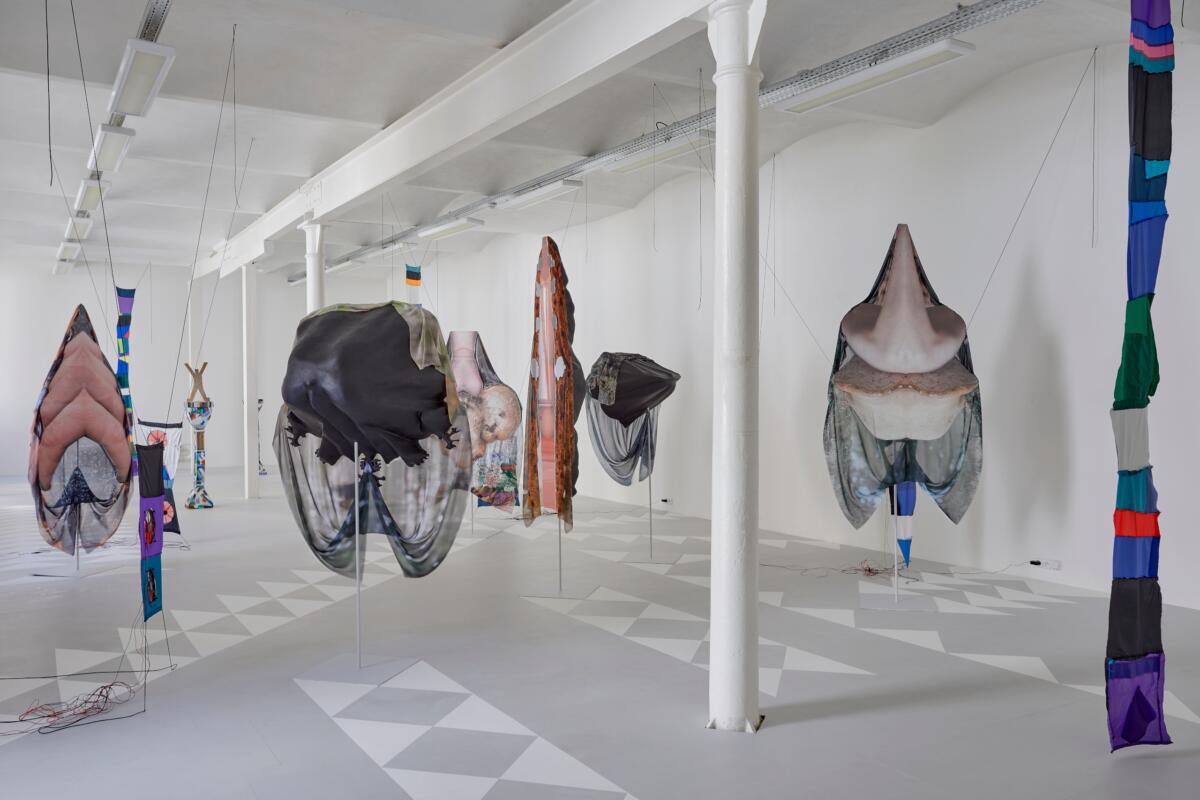 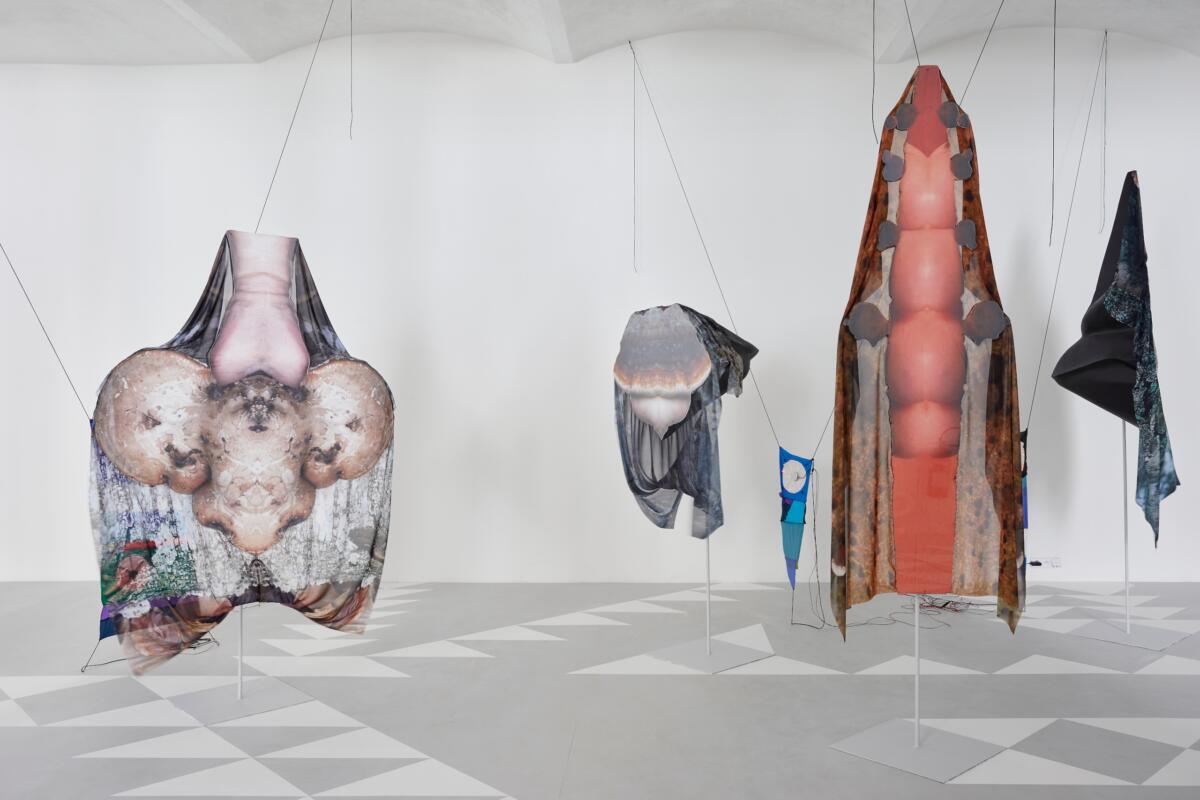 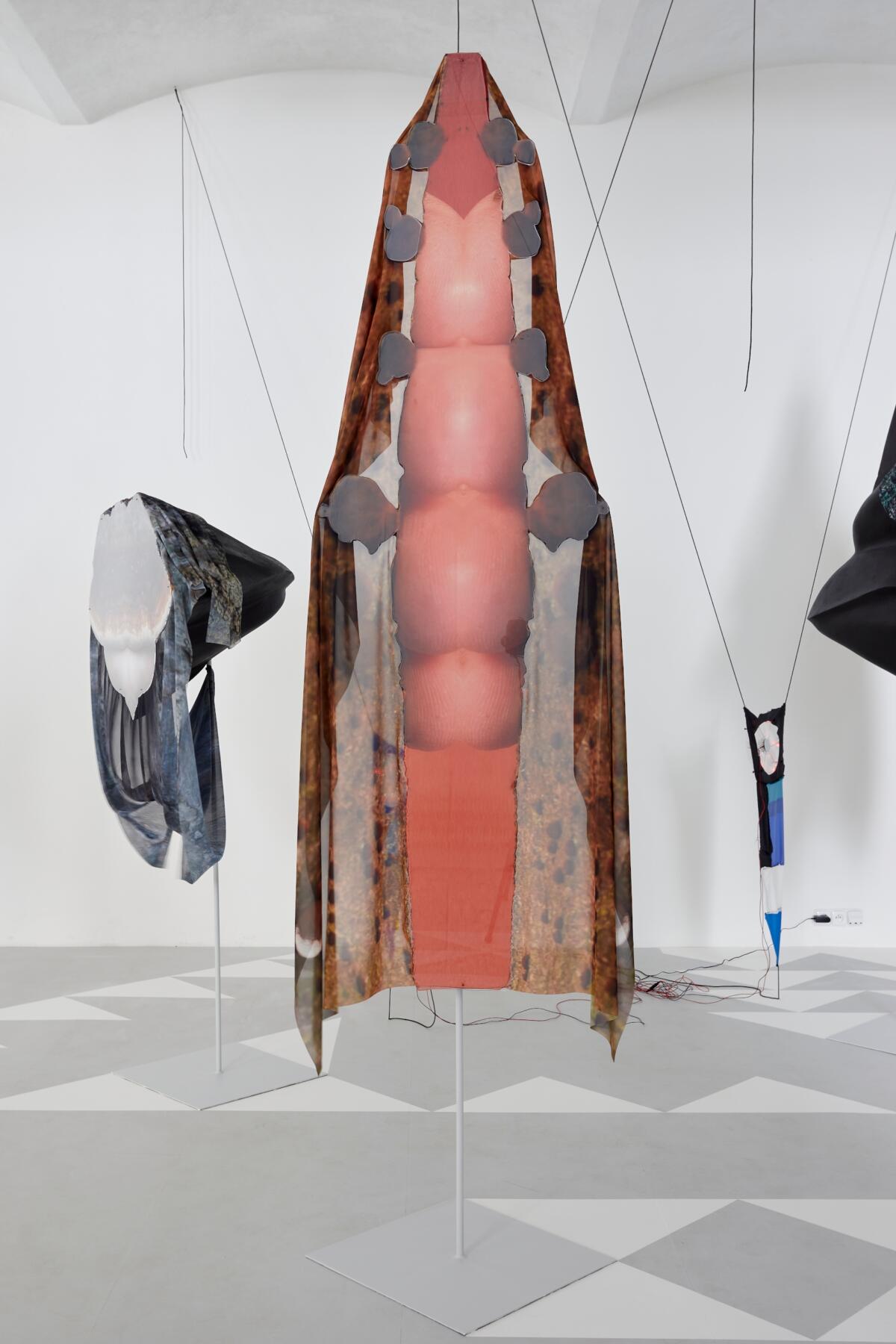 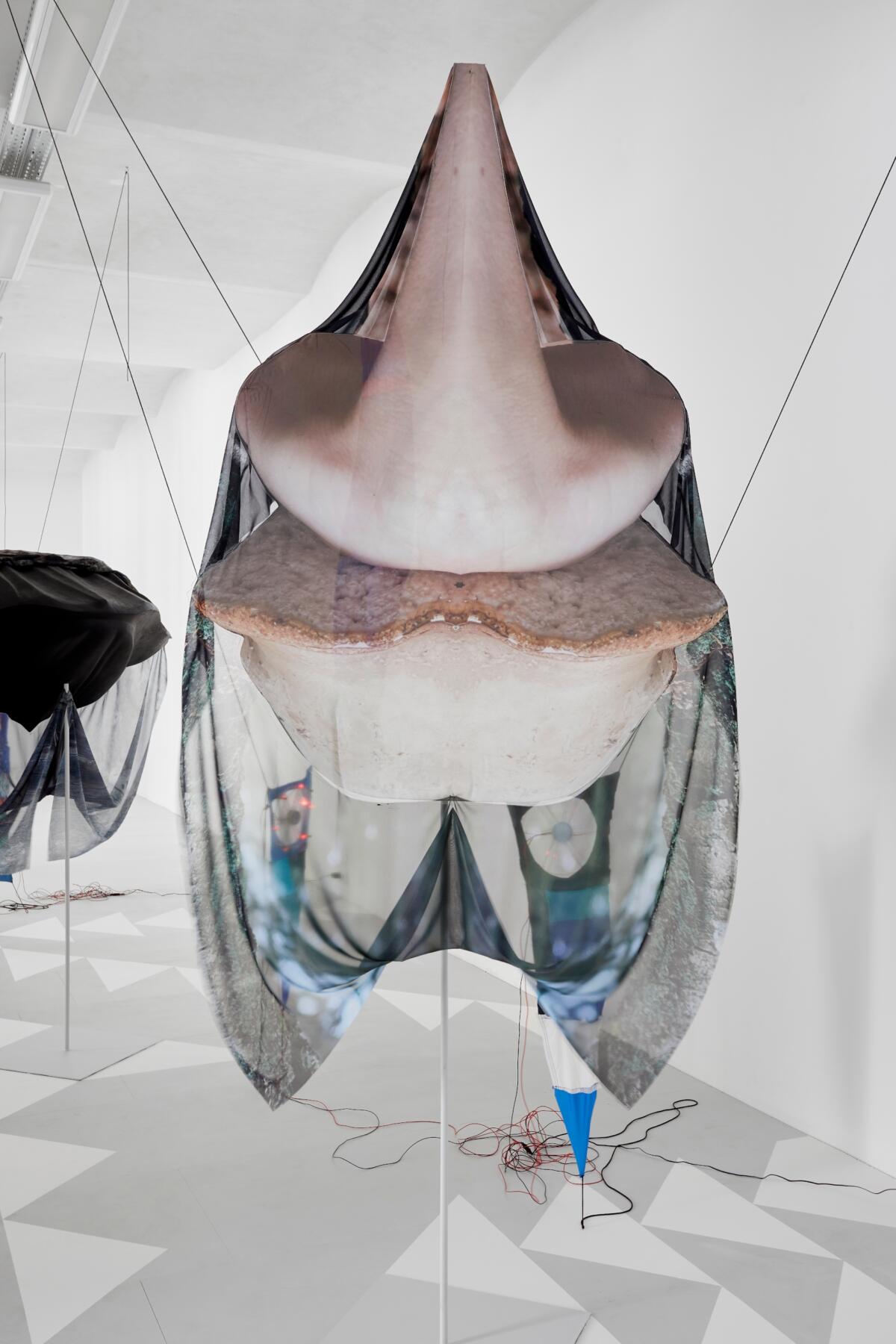 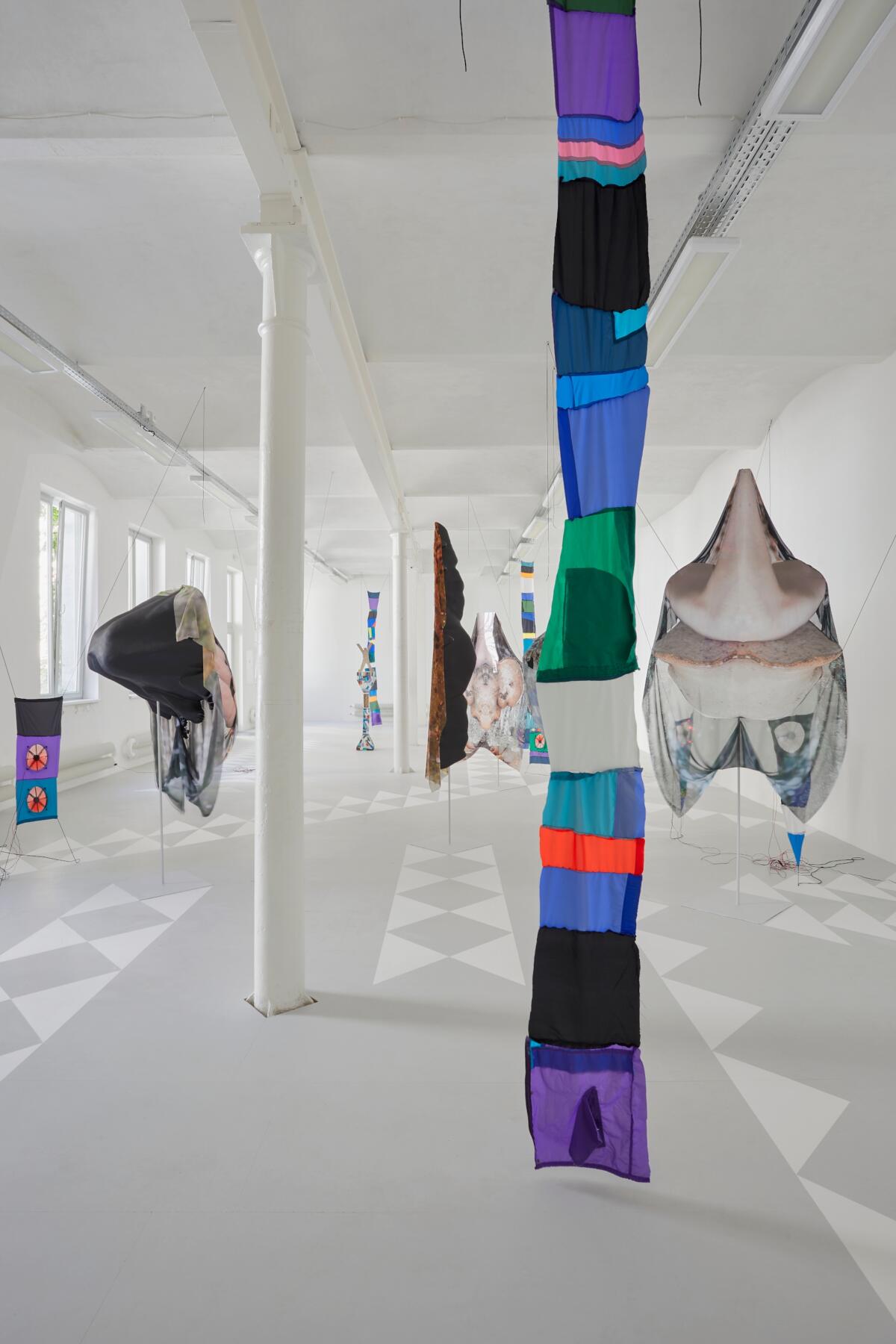 For two years the world and we ourselves have been seated on a seesaw… However, we still have one thing in common, something centripetal and comforting: the safe space of the art world. On many levels, consciously and unconsciously, intentionally and unintentionally, Prey Spray Scene Mean is a challenge to that safe space, however firmly ensconced in its centre. Performing a balancing act on the edge of the art world is one way of dealing with its contradictions. After completing his studies at the Faculty of Fine Arts at Brno University of Technology (FaVU), Kryštof Ambrůz basically turned his back on the art scene, although he never completely forsook it. Sensitive but rebellious, he is not an ideal candidate for either an individualistic career or for navigating his way through the collaborative waters of contemporary art, for which one needs to be able to network agilely. I suspect that from the outset Kryštof was somewhat disconcerted by the offer to be one of the exhibiters at this year’s series at the Cursor Gallery. Nevertheless, it was a challenge he clearly found impossible to refuse. His decision to conceive of his contribution as an inverted monument to himself, in which a strong relationship to nature would also be reflected upon, I took as the endpoint of the self-based approaches already explored in previous exhibitions. This in turn complicated, or rather deepened, the relationship with the exhibition Against Nature that inspired this year’s cycle.

The core of Kryštof’s work for Prey Spray Scene Mean emerged in late spring, when he paid several visits to the country house of his father, Jan Ambrůz, in Šarovy in the Zlín district. Working with a chainsaw represented a challenge from which there was no escape. With it, he hewed gnarled tree trunks and fashioned the basic shape of a pair of columns, four figures and a frame housing a textile image sewn later. His insistence on craftsmanship and the do-it-yourself principle then became the connecting point between the objects referred to and the textile artefacts and assemblages created later, already dialogically linked to the idea of the objects by Anetta Mona Chişa and Aleksandra Vajd that was gradually taking shape. For Kryštof, work on wooden objects was the main artistic programme of this spring, while for Anetta and Aleksandra, already well established on the art scene, participation on the Cursor exhibition slotted snugly into a long list of other projects and artistic obligations. The creative dynamics were thus different from the very outset, though they all converged on the central idea that the exhibition as a whole represented a challenge to venture into uncharted territory.

From the very first meeting I had with Anetta and Aleksandra, we knew that the starting point of their contribution would be the photographic series Atlas, which they began work on in 2020. During trips they took together they sought to escape the city and forge the conditions for a creative collaboration. Atlas features an interest in the morphology and aesthetics of nature, its “strangeness”, and, by extension, our own strangeness too, which is foregrounded through the contact between objects of nature and the human body (present above all in the form of fragments of hands and fingers, connected to the sense of touch, the sense most remote from the so-called higher spheres of abstract thought). The power of Atlas can be found, inter alia, in the ambivalent depiction of the body – dehumanised, occupying the role of tool or prop, while at the same time acquiring a new gravitas in the proximity of the “natural Other”.

For me, Atlas remained defined by the medium of photography, and although right from the start Anetta and Aleksandra spoke of their desire to conceive of this series in an object-based way, I continued to imagine it as a flat image grid. However, over the last two months Anetta and Aleksandra have radically redefined their initial “material”. So much so, indeed, that for some time I had difficulty imagining what they actually had in mind. What they have arrived at could perhaps best be described as a shift from light to darkness as a shaping element. Light is essential when taking a photograph. At the same time, Atlas (as a system for the organisation of natural history) alludes to Enlightenment reason, i.e. a specific mode of knowing (and controlling) the world. The shift to darkness is also a shift to the body, to that which is taking place inside, beyond the reach of reason… In objects that are based on the post-production of 2D and subsequently 3D images, light remains only as a trace, as a reflection on the surface of plexiglass. The flat bellies of the black bodies still reproduce something of their “origin”, though this is but a facet of something more complex, something that has acquired a body of its own, using which it claims our attention. 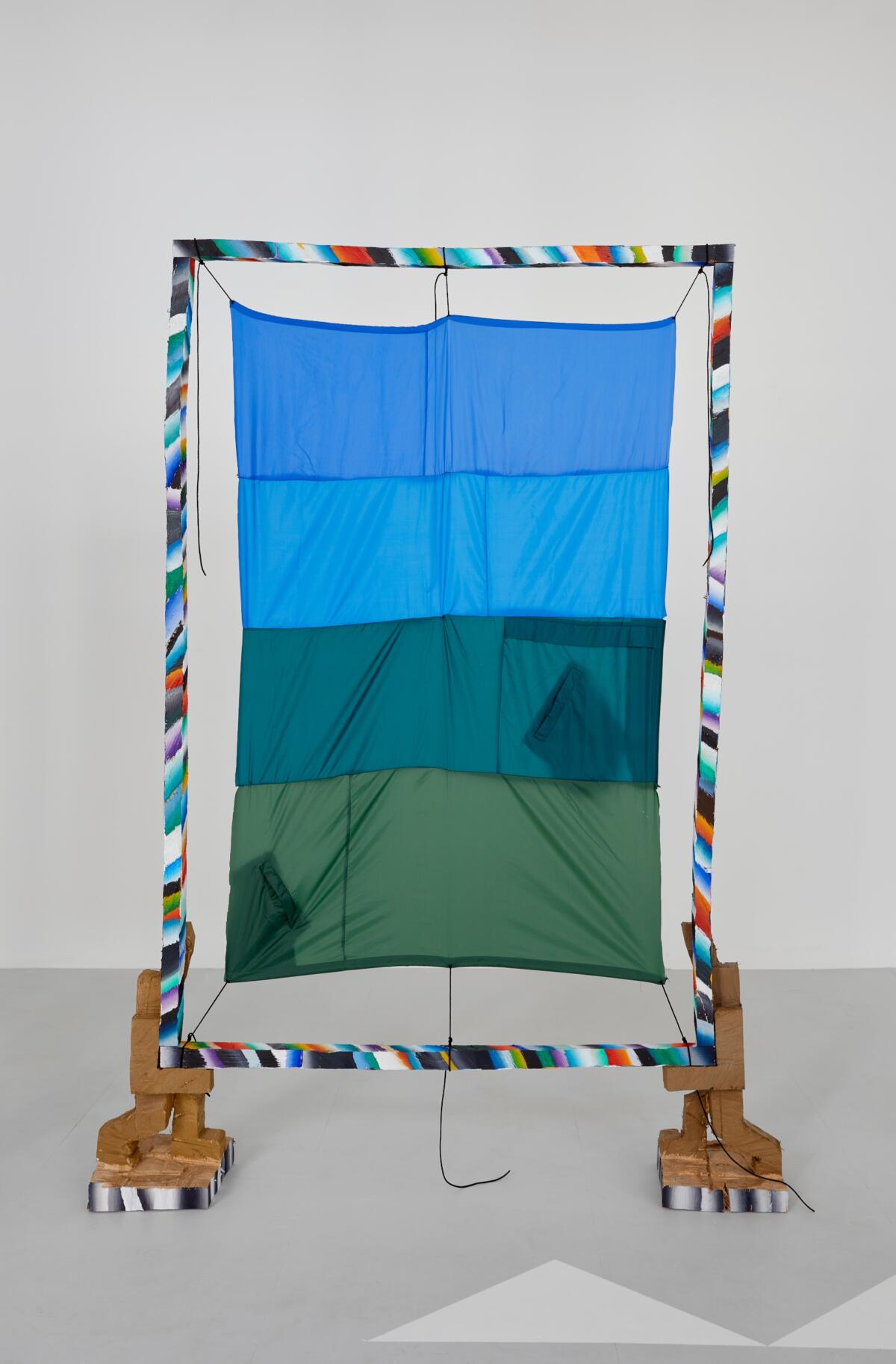 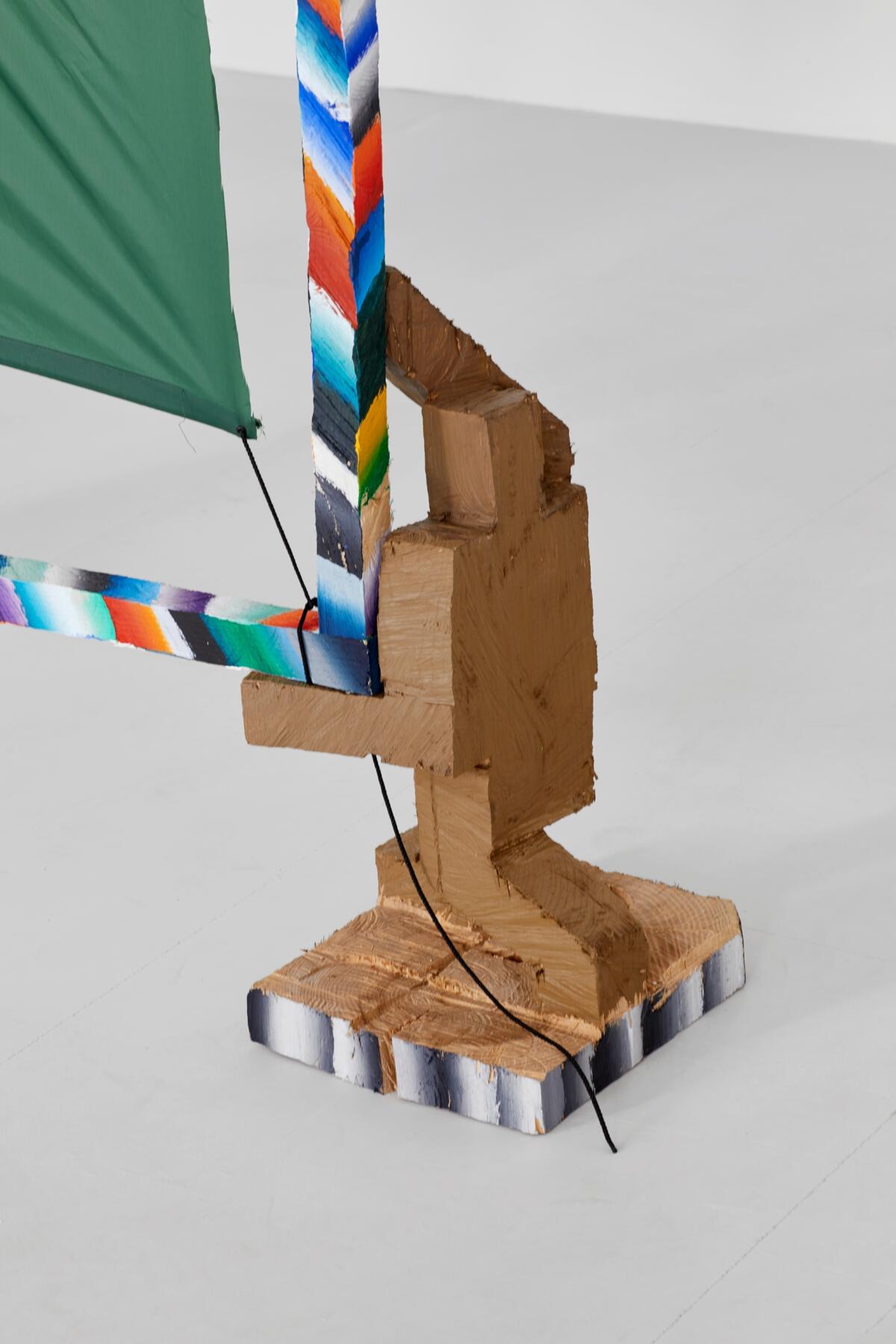 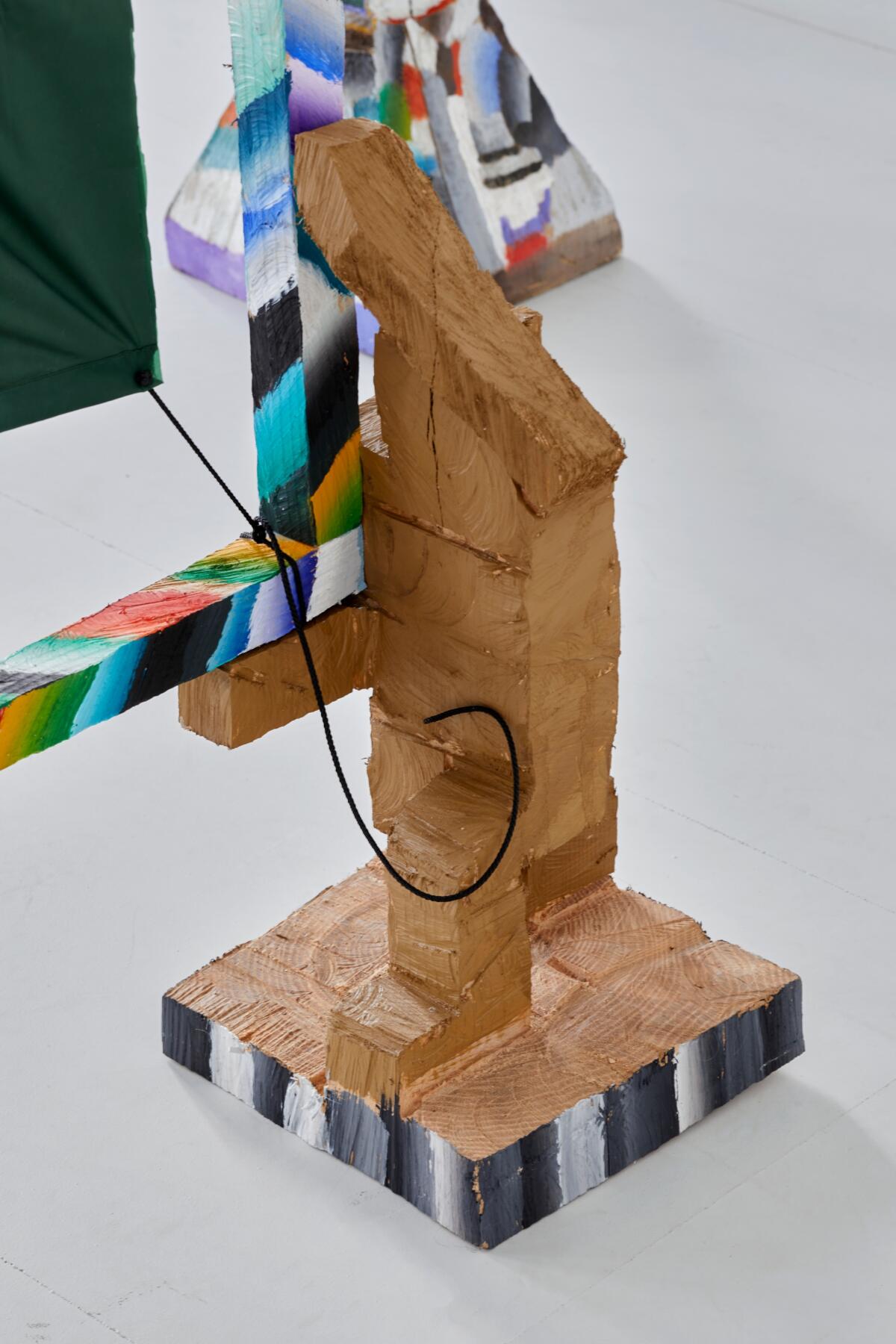 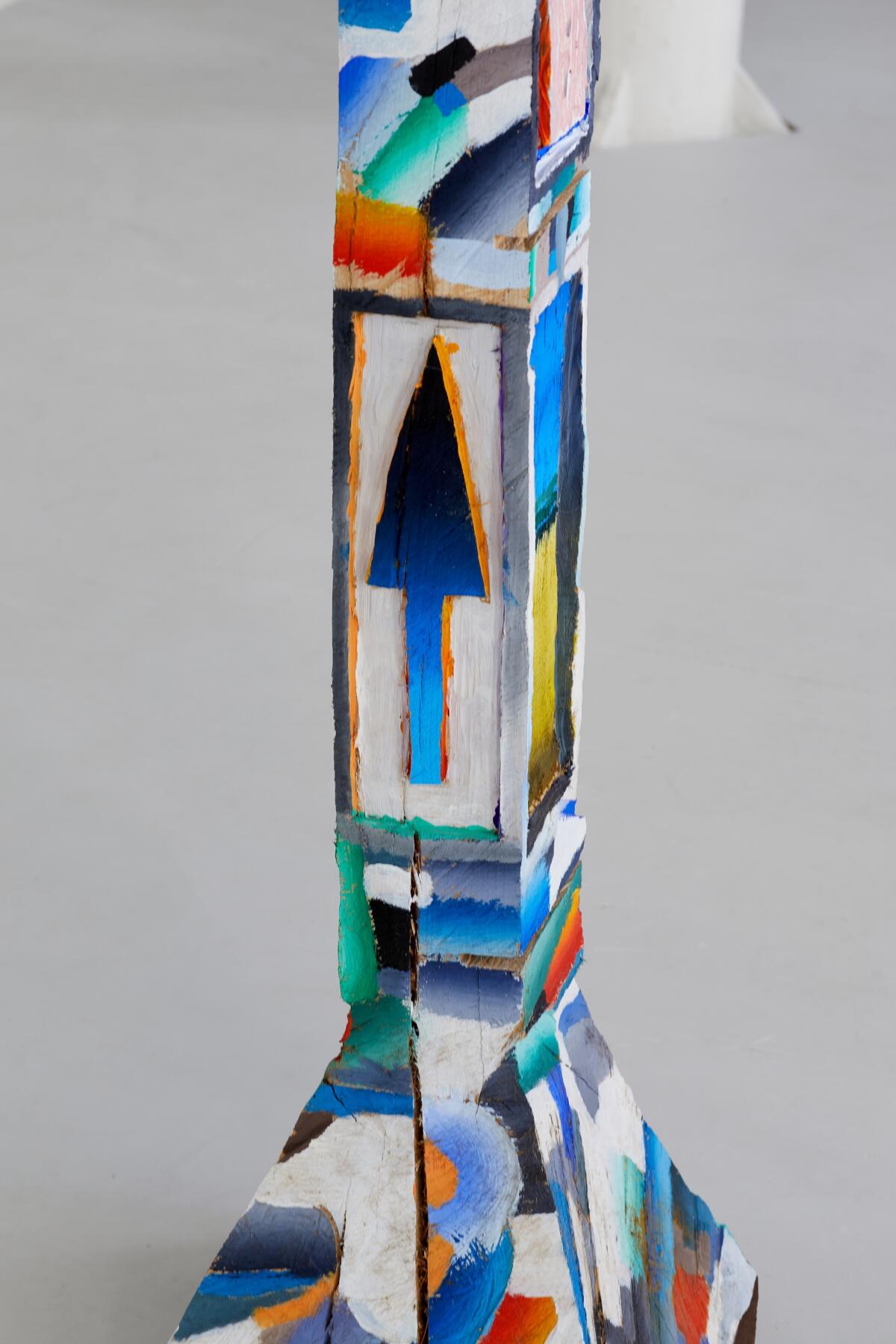 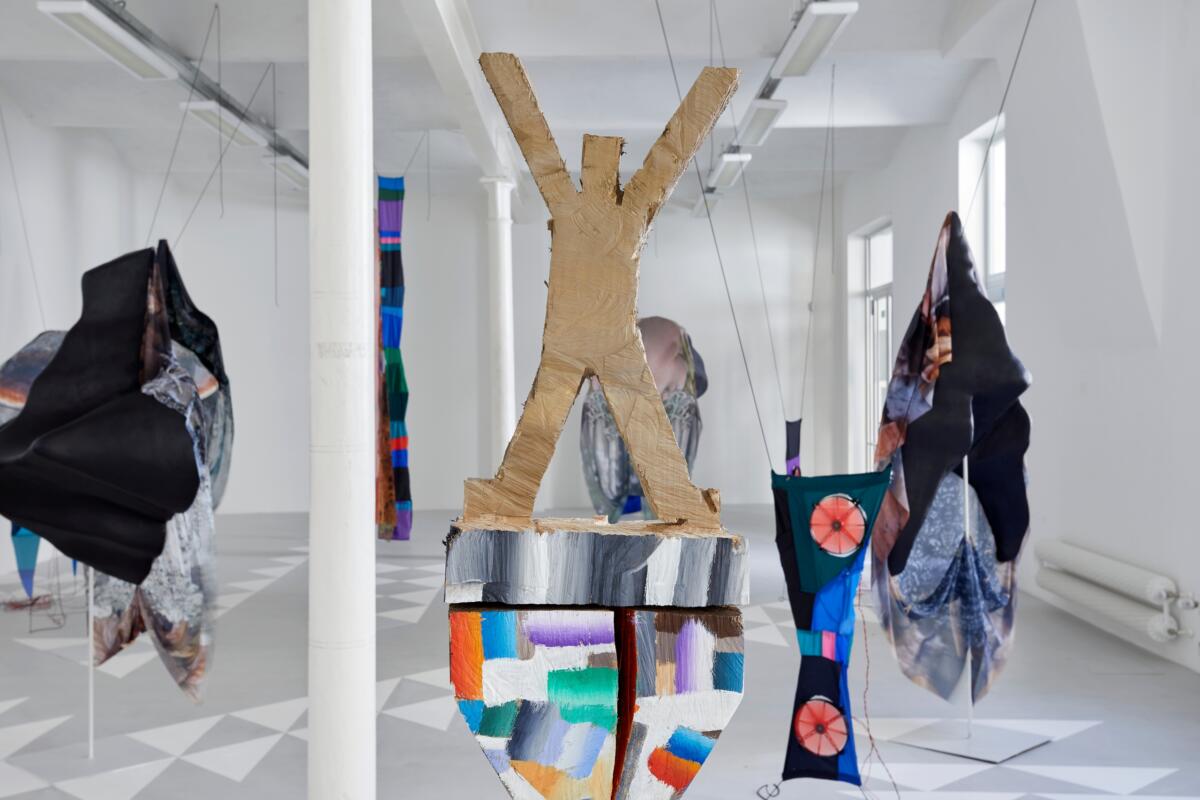 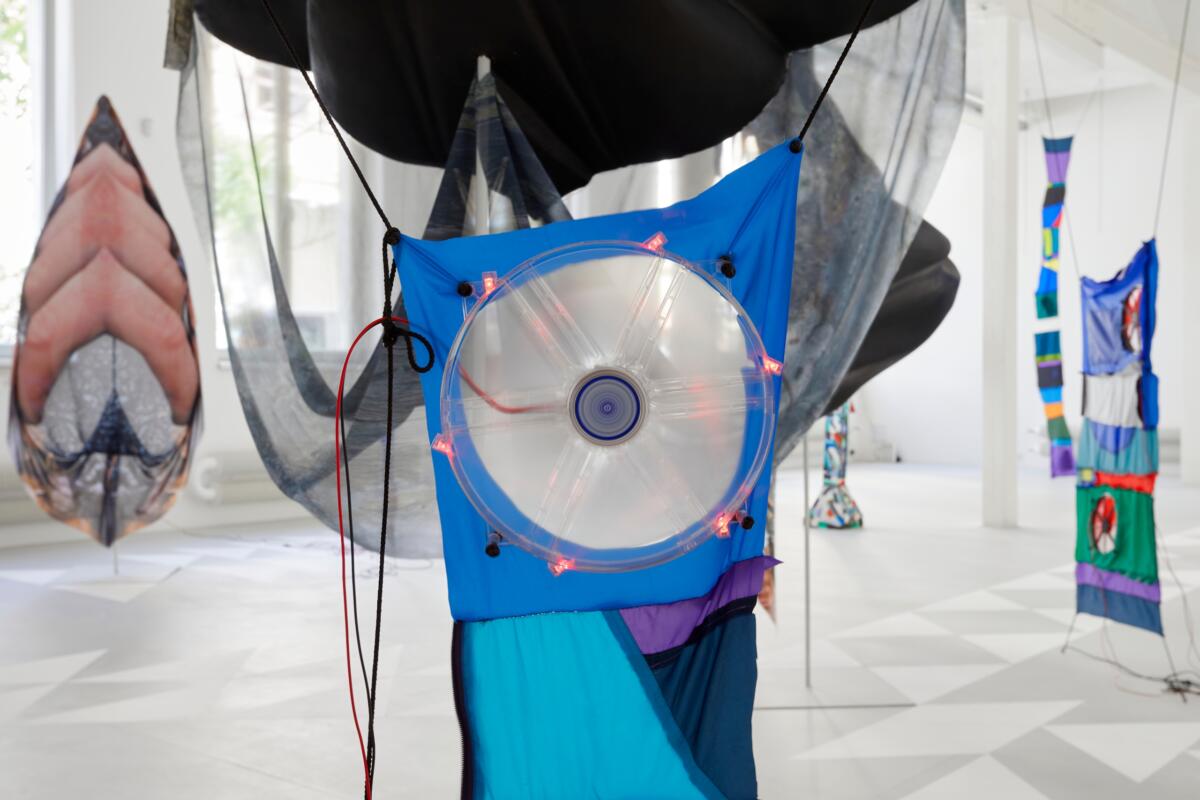 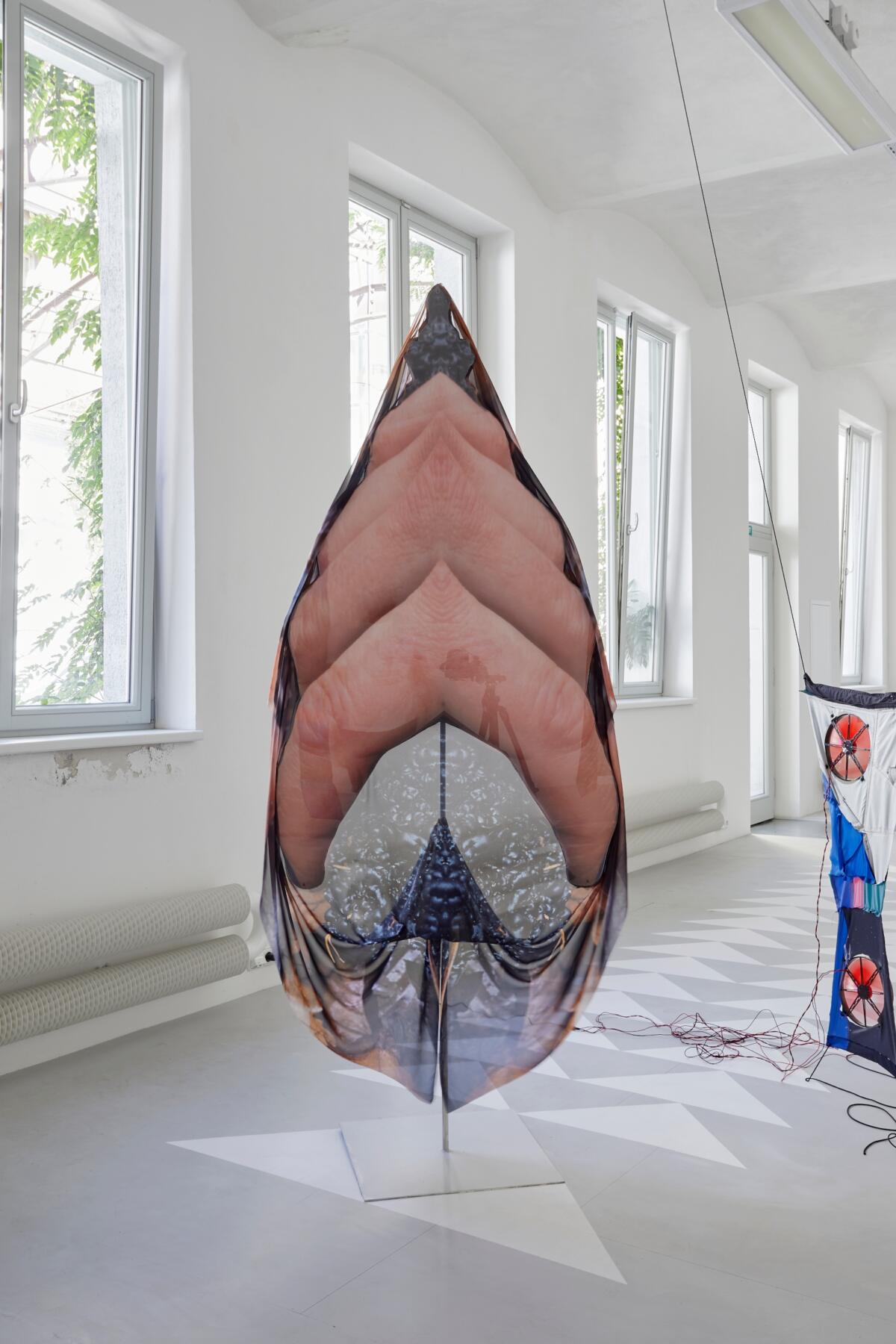 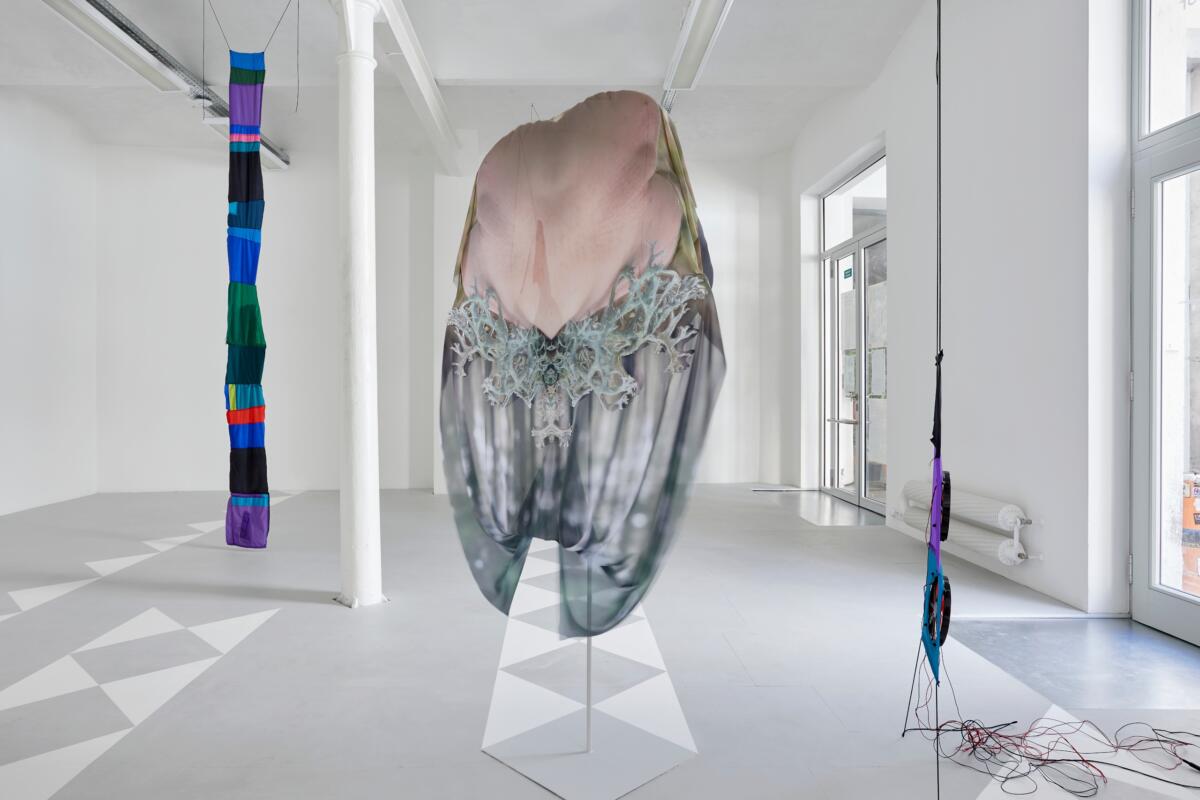 Bodies on the outside, bodies from the inside

The encounter of two sets of bodies that takes place in the Cursor Gallery began in a forest, literally or symbolically. Timber, roughly hewn with a chainsaw in a garden in Šarovy, along with columns and a frame carried by figures that contains within itself an image of the landscape. Bark, lichen, fungi and human skin photographed in the forests outside Prague and in Hnátnice, “baked” into data that, when spun on a virtual circle, sinks down into dark bodies with flat bellies. This is one, less complicated level – bodies that stand before us, objects that we confront.

But there is another, more exciting perspective, in which we are not only confronted with bodies (columns, figures, black creatures) in the form of an exterior that offers itself to our sensory experience. In both Kryštof’s and Anetta and Aleksandra’s objects there is a demand present that we get to know “their” bodies from within. This is a somewhat more complicated notion, and it is also the moment at which their work perhaps converges most closely while diverging most radically. Kryštof’s bodies, especially the pithily fashioned figures and columns with their own iconographic programme, are placed before us as images of the interior. In this respect they fulfil the classical concept of the work – albeit a concept last updated significantly by the Emo-Romantic turn – as an image of the interior, which is for the most part in no way literal (as it is not here). You will not find any captions or explanatory notes on how to read any of the symbols carved and coloured on the side of the wooden column. The landscape motifs, which appear in abstracted form in the textile picture stretched within the frame, within the vertical collages and, to a certain extent, in the assemblages with fans, above all provide a background to the semantic core, which is a story in itself, a context within which it is easier to “read” said motifs.

With Anetta and Aleksandra’s bodies (black objects) things are different – we would search in vain for any biographical references. The black bodies were created by means of the manipulation and “inflation” of originally flat, bitmap images. Every single creature that came into being this way behaves like the body of a camera mutated with software that someone has taken and turned inside out. What we see are the viscera of media. In these new works, the energy is focused very systematically on the problems the “motif” creates for the artists, but perhaps even more so on internal problems, on the innards, the very agenda of photograph and object, as well as the medium of the exhibition as a site-specific form of presentation. There is a tremendous degree of control here, but a control that at the same time controls itself and takes care to leave room for affect, emotion, uncertainty, incompleteness… If the personal, the interiority of the interior, is to be found anywhere, then it is here, in the affective self-control in which the work mirrors its creators. 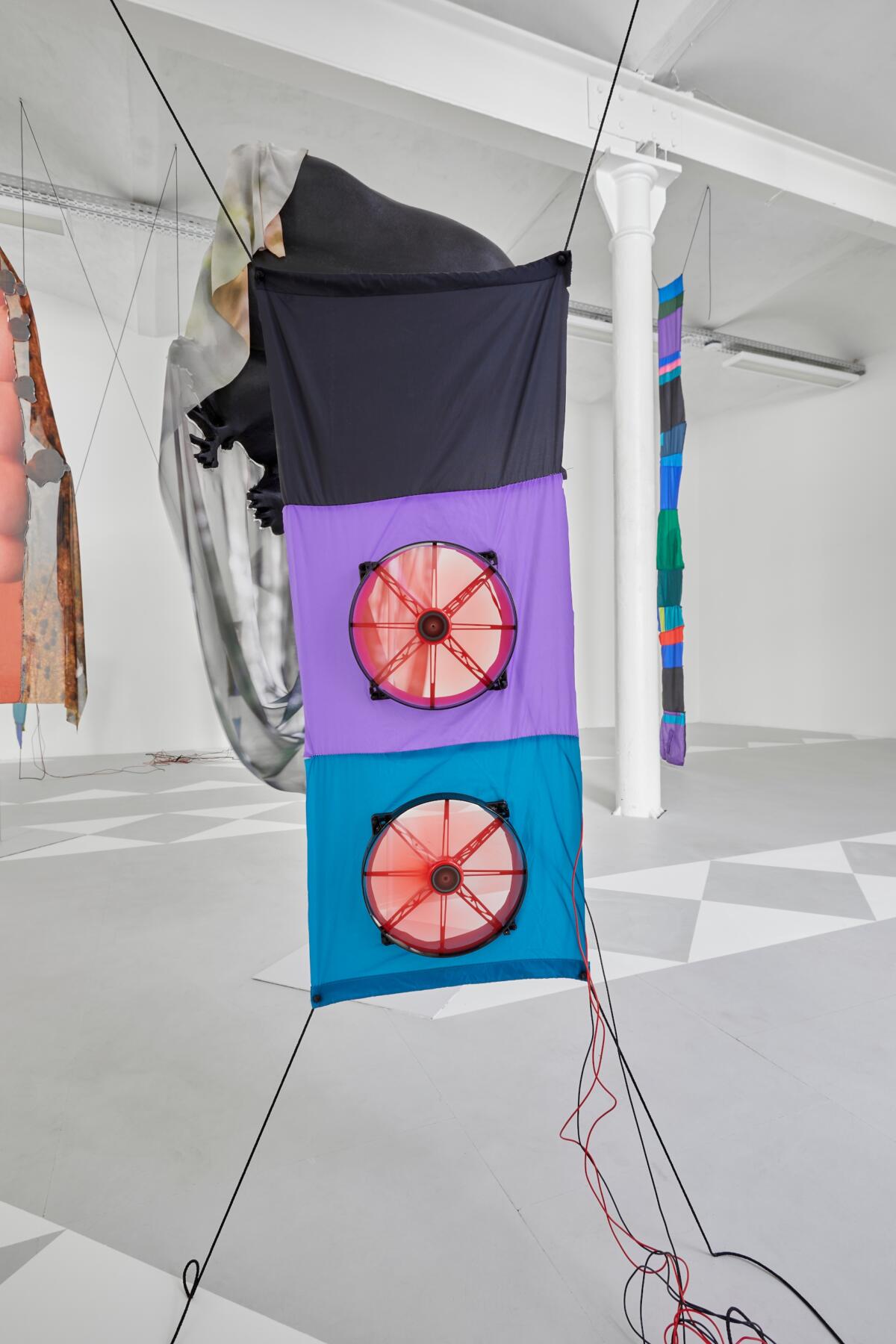 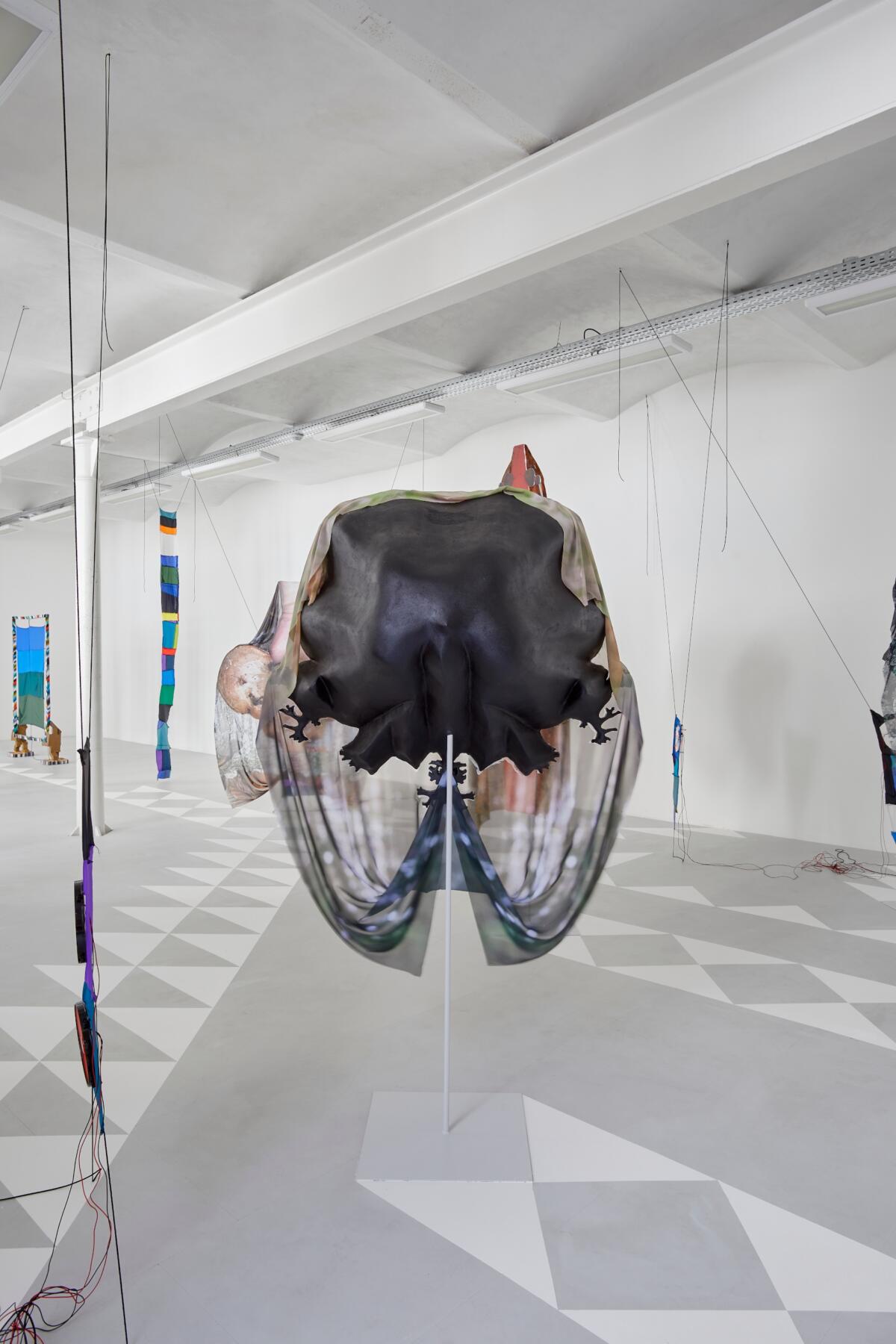 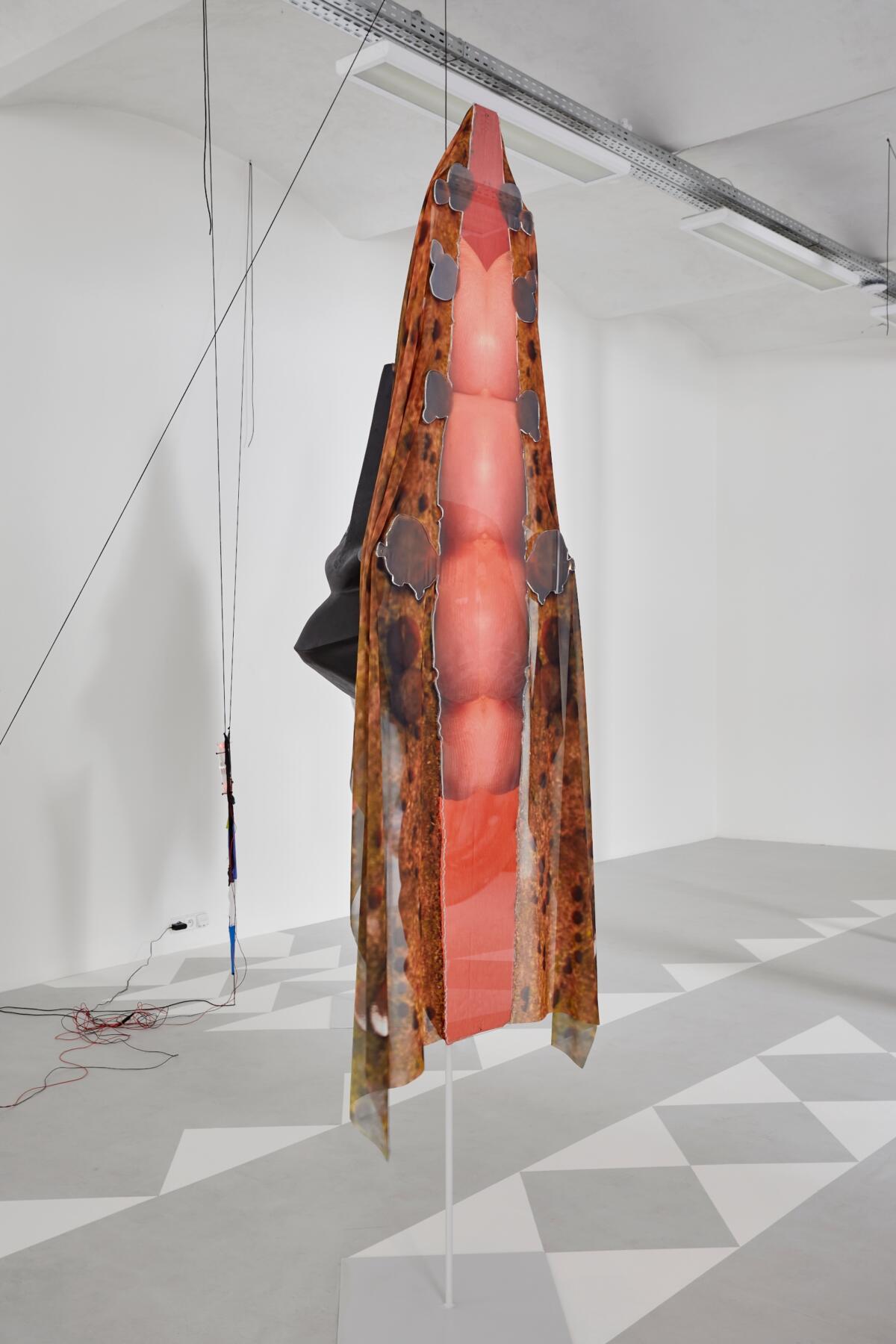 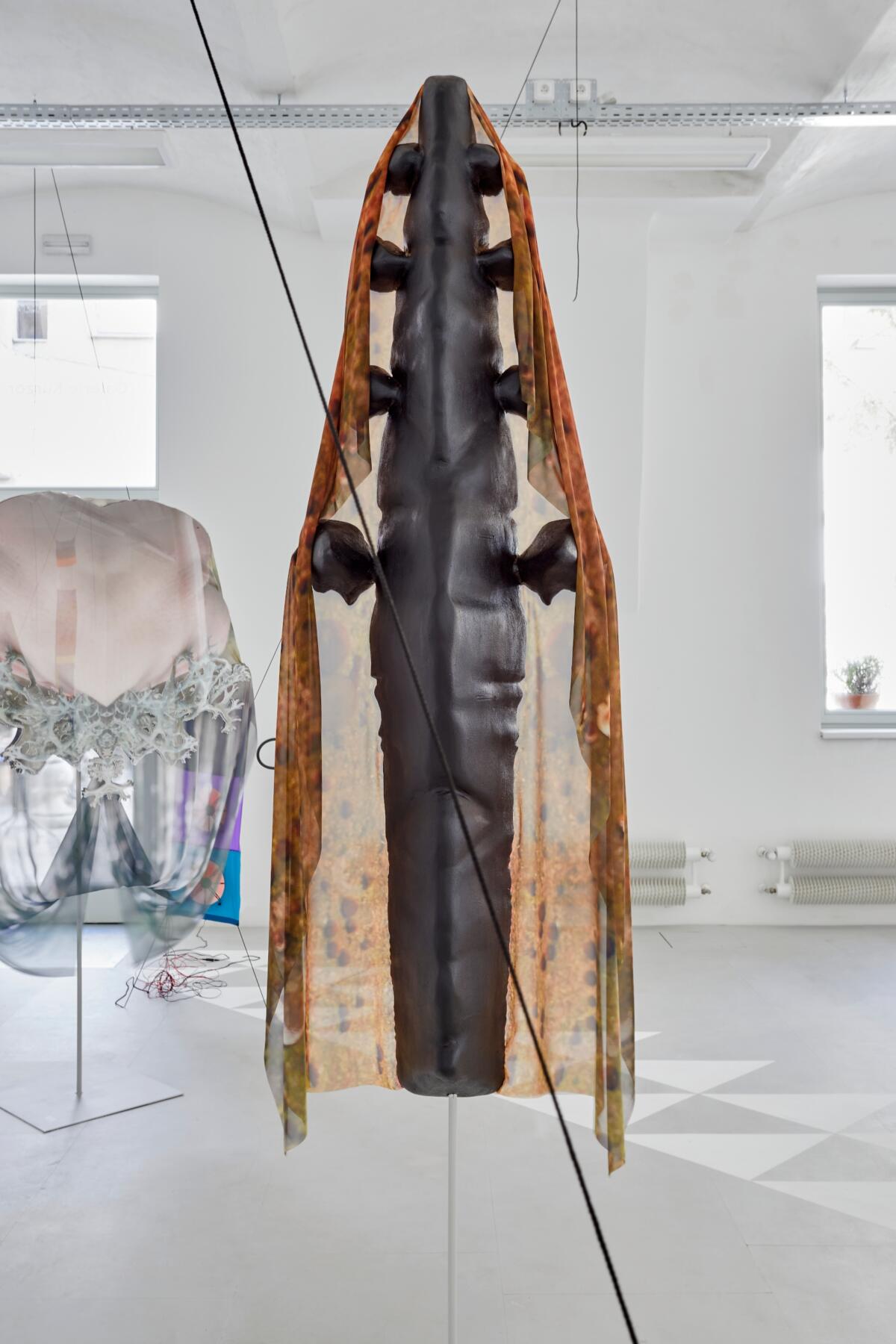 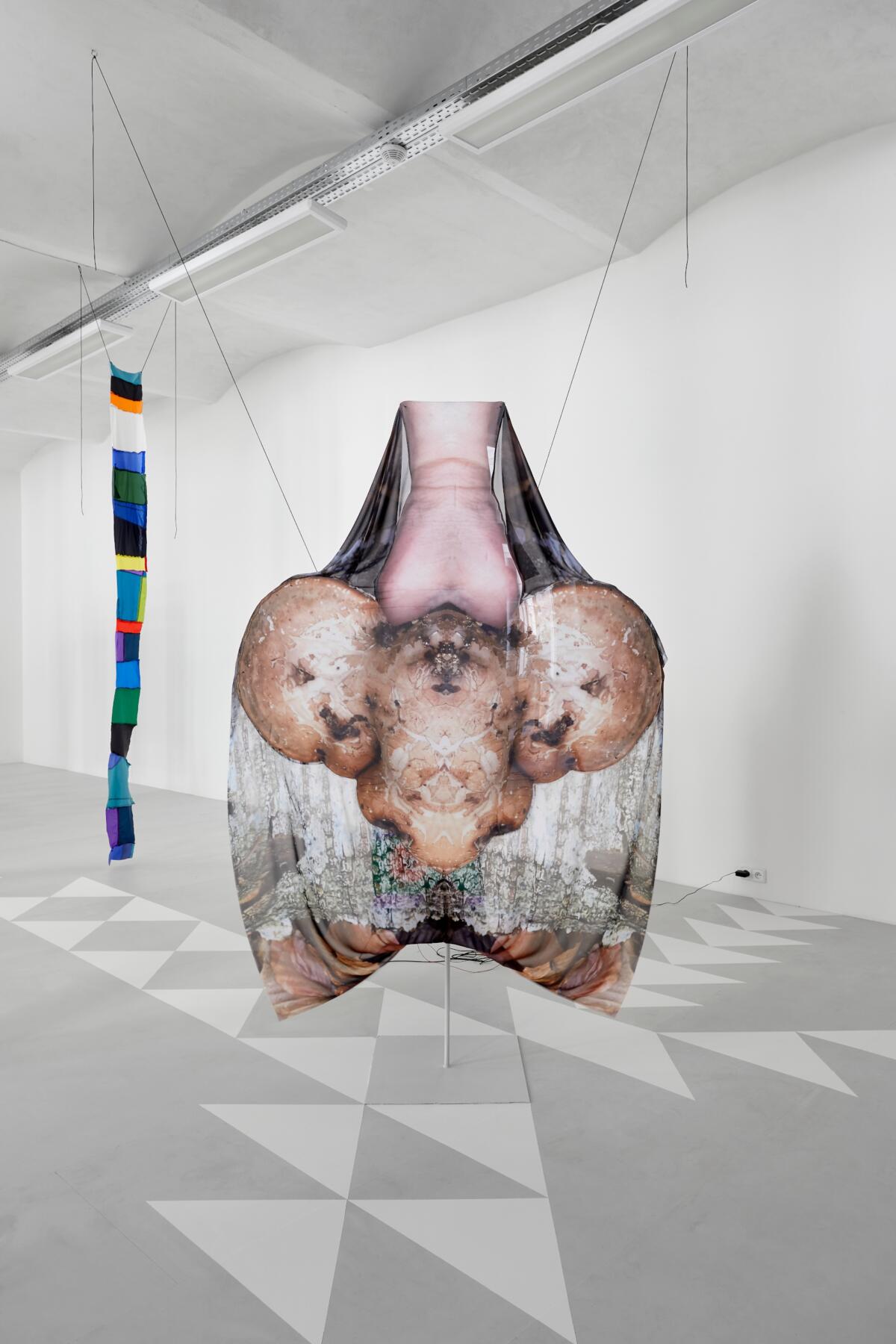 Kryštof Ambrůz belongs to the generation shaped by the influence of the post-internet and its aesthetics, only to have subsequently to grapple with the question of which direction to take. For Ambrůz, an emphasis on authenticity and actuality, a presence within the moment of creation unmediated by medium, became the path to follow, and this path naturally led him to the fringes of institutionalised art practice and the graffiti scene. He works with raw, often unyielding materials, though since completing his studies he has also sought self-expression through painting, where he balances on the boundary of abstraction and an idiosyncratic symbolic language. He lives and works in Prague.

Anetta Mona Chişa and Aleksandra Vajd have a wealth of collaborations behind them that represent an opportunity and challenge to step outside the “safe” boundaries of their own thinking and expertise. Their current collaborative work aims to bridge or dissolve the boundaries between the seemingly remote media of photography and the object. Ideally, as was the case at a recent exhibition at the Kunsthalle Bratislava, it aims at an inclusive form of expression by means of installation. Both artists, originally from Romania and Slovenia respectively, live and work in Prague.