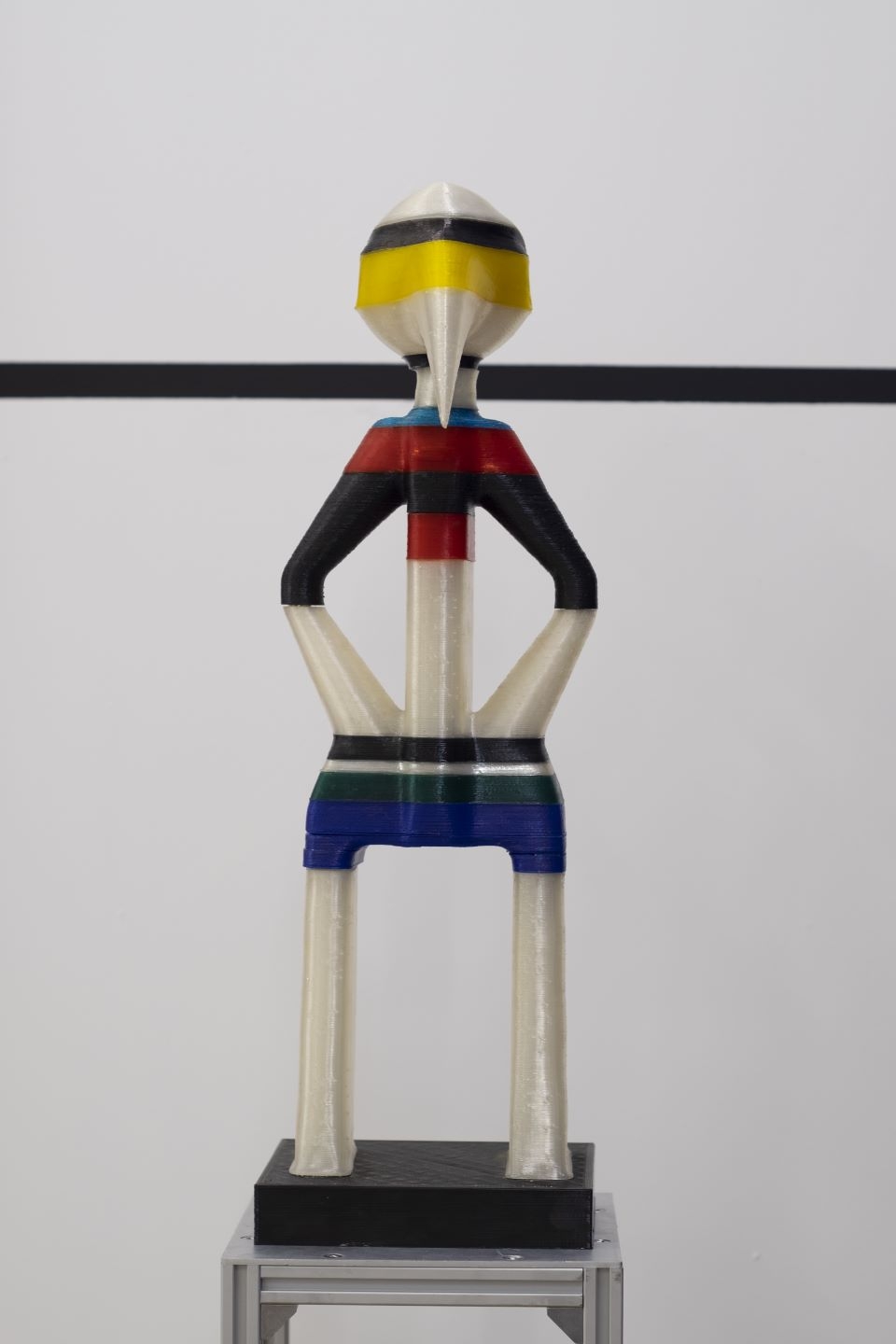 The decade we have just seen closing was marked by a wave of nationalisms that rolled over the world and invigorated the polar dialectic of “those with us” and “those against us”. Poland was no exception to this trend, as the country’s government and media were wholeheartedly devoted to policing history, screening out the unflattering episodes from the mainstream narrative and nurturing historical resentments.

The increasing preoccupation with pro-Polish or anti-Polish history(ies), as absurd as it seems, dominated the debate about the past. In this context the exhibition Opaque à elle-même. La Pologne et le Postcolonialisme at La Colonie, Paris, comes as a remedy for the distorted perspective, a refreshing leap into the hypothetical pasts.

The increasing preoccupation with pro-Polish or anti-Polish history(ies), as absurd as it seems, dominated the debate about the past. In this context the exhibition Opaque à elle-même. La Pologne et le Postcolonialisme at La Colonie, Paris, comes as a remedy for the distorted perspective, a refreshing leap into the hypothetical pasts. It reminds us that the anti-Polish is inexorably intertwined with the definition of Polishness – those two identities dance together relentlessly in the dynamic tango of interdependency. One becomes oneself through the act of exclusion of the other. This post-Goffmanian model of identity formation through exclusion is acutely actual in the age of soaring nationalism and has been exceptionally fruitful in investigations of national identity (ies). Yet to me – as well as it becomes clear in the exhibition – the seeming opposites resemble a territory, a country, an empire, where the former remains always on the margins, in the dark unknown corners, while the latter radiates from the center towards remote fringes. The map of the empire is barely legible – the contours not only have faded out, but have been maniacally superimposed on each other to the degree of utter obscurity. As the protagonist in Agnieszka Polska’s video “Ask the Siren” repeatedly fails to identify herself, so does the Polish subject as portrayed in the exhibition Opaque à elle-même. La Pologne et le Postcolonialisme at La Colonie, Paris. In this small, nearly intimate show the artists follow the Polish mind where it is the least obvious but also, as it turns out, most essentialised. The piece by Janek Simon, “Synthetic Poles”, is a product of an algorithmic programme designed to render portraits of perfectly generic Poles, blending various faces into a disconcerting effigy. These non-existent, statistical citizens address the beholder with glitched, blind eyes, eerie tokens of post-truth politics. But the digital patina does not ward off the spectre of physiognomy and racial and ethnic profiling; in the light of postcolonial theory animating the exhibition this spooky portrayal appears as an ethnographic endeavour seeking to define not only the other (the subaltern) but also the coloniser. Thus, the synthetic subject is ambiguous, assuming both roles, a disturbing hybrid. This irresistible sense of the uncanny, of something familiar yet different sets the tone for the entire exhibition, which builds upon the virtual, the hypothetical and the unknown.

A work by Emma Wolukau-Wanambwa, “Paradise”, unearths such an unknown area as it tells the story of a refugee camp in Koja, Uganda, which sheltered 7 thousand of Polish and Ukrainian refugees during II World War. The austere form of the piece, comprised of 3 photographs of the site, now in the process of evanescing, and a written text of a witness of the settlement, encourages intimacy between the viewer and the excavated event, creating a tension that is perhaps the most remarkable in the entire show. The personal aspect of the work is contrasted with the figure of utter absence. What is so captivating in this piece is the elegiac and gentle atmosphere of this universe à rebours, where the roles have been reversed and the lost dialogues have been restored. The labour of retracing the former camp in the abundant Uganda landscape captured by Wolukau-Wanambwa is perhaps parallel to the effort necessary to un-other African people to the Polish imagination. However, the whole exhibition is by far and large dominated by the clever and witty contributions of Janek Simon. The eye is easily drawn to his colourful, 3D-printed sculptures, reimagining conceptions of the Orient disseminated by travellers such as Marco Polo (Cycnocephali). But it is a small collection of a pre- World War Two magazines that most poignantly deals with the ghost of colonialism. The artist gathered issues of the magazine Sea and Colonies (Morze i Kolonie) spanning from mid-thirties to August 1939, retracing the birth and coming of age of colonial imagination in Poland. The imagery of the magazine oscillates between nationalist and colonial idioms, often merging them. As did Simon in his poster Polish Cultural Season on Madagascar 2006, restaging the interwar Polish desire to colonise the island in the 21st century. By creating visual difference – a phantom reality (or a phantom limb pain, one is tempted to say) – in which dreams of empire have been addressed and satisfied, Janek Simon appeases the historical trauma of having been subjugated to other nations. The fact that the artist does not introduce a new discourse, but appropriates an already existing one, inevitably gives the shivers, while underscoring the actuality of postcolonial syndrome in the Polish context.

The show does not only offer a portrayal of Polish dreams of colonial power – it also articulates the existence of Polishness as otherness, possibly an intrinsic one. The piece by Emma Wolukau-Wanambwa, as well as ethnographic work by Janek Simon, picture an unstable entity, an impossible subject, always fleeing, caught in contradictions, virtual, cloudy and opaque. This opacity and the feeling of inner schism reaches its highest pitch with the video by Agnieszka Polska, aforementioned in the introduction. Ask the Siren interrogates Polish identity as perpetually torn between the desire to belong to the West and the urge to preserve its uniqueness. The eponymous siren once again takes on the old topos of Polonia, yet this time the consciousness of the personification reaches deep history, excavating the collective memory of pagan Slavic times. Paradoxically, this dialectic opposition of Slavdom and the West stays in a jangling dissonance with the rest of the show, which sets out to explore non-linear, alternative ways of rethinking history and identity.

the show uses the sign “(post)colonialism”, which had no real referent in the Polish history, implementing a set of meanings, strategies and cognitive tools that seem utterly alien to the investigated subject. Yet, this gesture manages to revise the power relations as they are told in grand narratives, unveiling hybrid dynamics driving contextual history and integrity of Poland

For me, the exhibition functions as a catachresis – a misuse or a mis-need of a word, or rather, as Gayatri Spivak would have it, “a concept metaphor without an adequate referent”[1]. In the postcolonial reality, catachretical strategies function as a double-edged sword – both oppressive tools and creative circuits of resistance. The colonised reuse, as intelectual spoilia , a concept or idea that exists traditionally as a feature of imperial culture; or, the other way round, the coloniser abusively inscribes a sign with a meaning that does not coincide with the subaltern reality. For Derrida, the intrinsic abuse of catachresis is “both a kind of impropriety and an opportunity, inasmuch as in losing the sense proper to a sign exposes a reconfigured relation to that sign”[2]. In the case of Opaque à elle meme, the show uses the sign “(post)colonialism”, which had no real referent in the Polish history, implementing a set of meanings, strategies and cognitive tools that seem utterly alien to the investigated subject. Yet, this gesture manages to revise the power relations as they are told in grand narratives, unveiling hybrid dynamics driving contextual history and integrity of Poland. The antithetical vectors of the troubled identity, encompassing both the coloniser and the colonised, are herein put in the limelight, with no clear moral verdict. The task of decolonising these conflicted shadows is tedious and tiresome, but it seems vital nowadays, when identity politics too often allows for manipulation and misleading.Decolonization essentially means a greater degree of empathy and a lesser number of those, who are deemed the Other. And this exactly what is urgently needed in the dawn of the new decade.