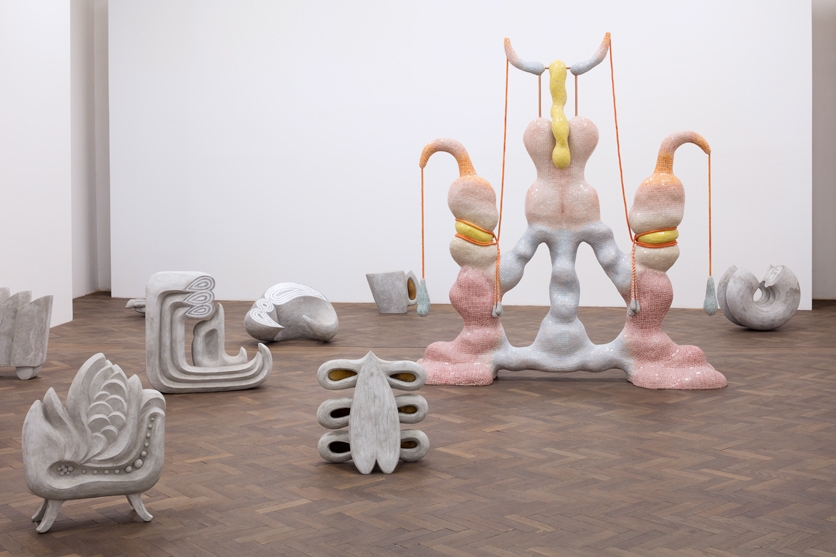 This exhibition presents two young sculptors who are rising Central European stars: the Czech artist Anna Hulačová and her Hungarian contemporary Zsófia Keresztes. Both develop the Surrealist tendencies that culminated in the 1930s, therefore the artists have invited František Janoušek (1890–1943), a prominent Czech Surrealist, as their “guest”. Janoušek’s 1935 illustration for Maeterlinck’s book The Life of the Bee is housed in the collections of the Prague City Gallery, and the name of the exhibition refers to the ancient Greek term “éntomos”, the plural of which, “éntoma”, was later used to mean “insects”. Both artists see in today’s environmental crisis, when bees and other insects are dying, the precursor of a manmade disaster. Zsófia Keresztes explores the theme of self-devouring and Anna Hulačová deals with the symbiosis of manand insects. Éntomos is their first joint exhibition. 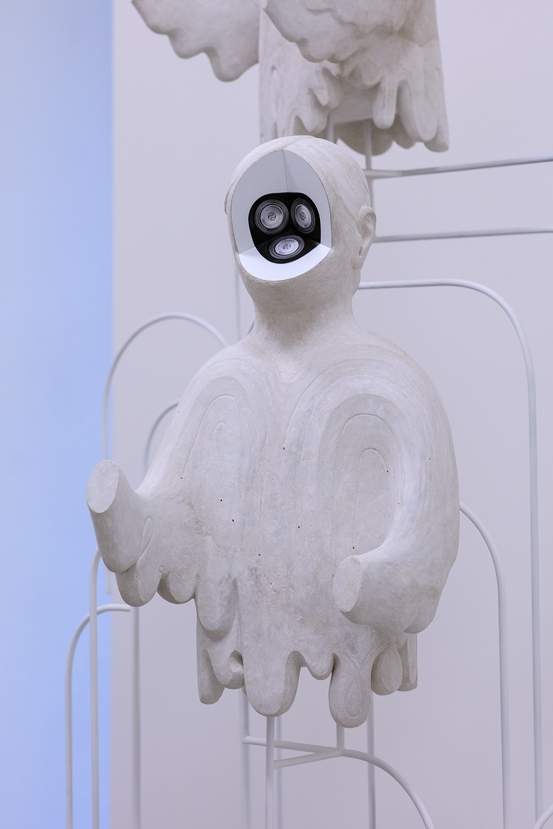 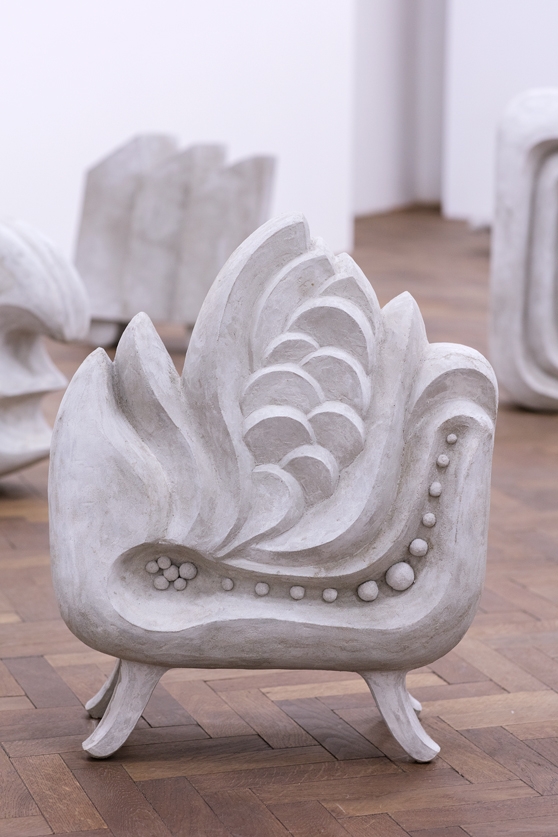 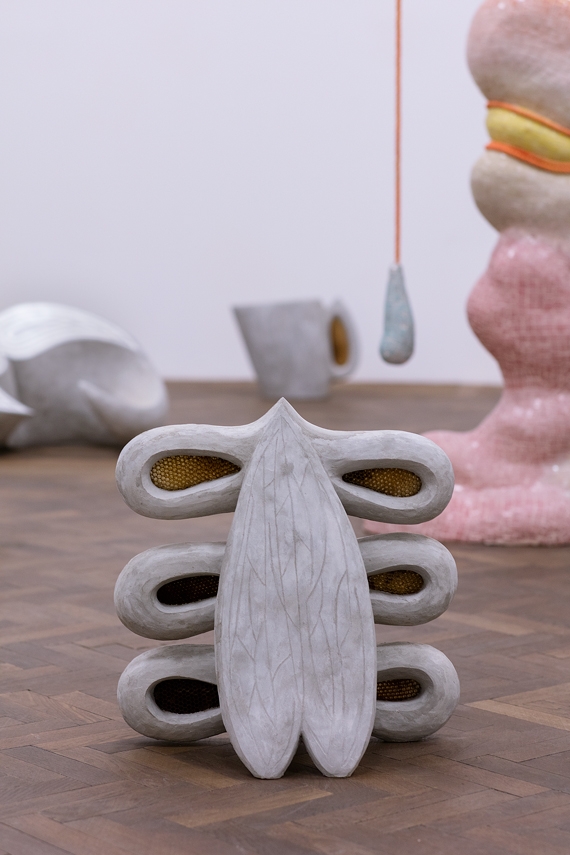 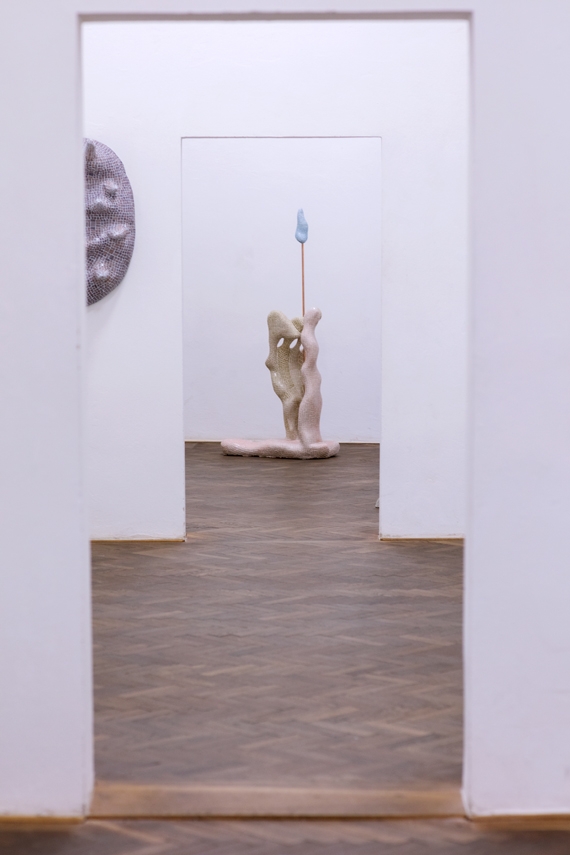 The name of the exhibition etymologically refers to the original ancient Greek term “éntomos”. Its translation into Latin as “insectum” was first mentioned in the writings of Pliny the Elder, Natural History. Pliny freely follows from Aristotle, who studied the unity of the soul of a “dissected insect” which lives further even if cut asunder. Éntomos in the original ancient Greek literally means “cut into sections” and in plural even “sacrifices offered to the gods”.

Zsófia Keresztes and Anna Hulačová have created a new installation for the exhibition placed in the central room, reminiscent of the well-known triptych The Garden of Earthly Delights by Hieronymus Bosch (1503–1504), whom Surrealists considered to be one of their predecessors. The bodies, in Zsófia Keresztes’s interpretation, cannibalize themselves. As she explains, “Their anatomy can be interpreted as the totems andmascots of a fictional 21st-century religion. These tools act as masks for rituals that help the users transfigure themselves into a different state of mind.” 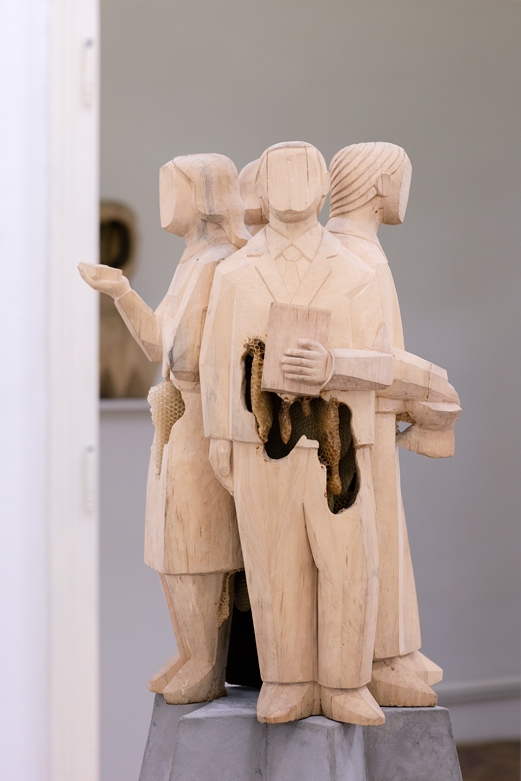 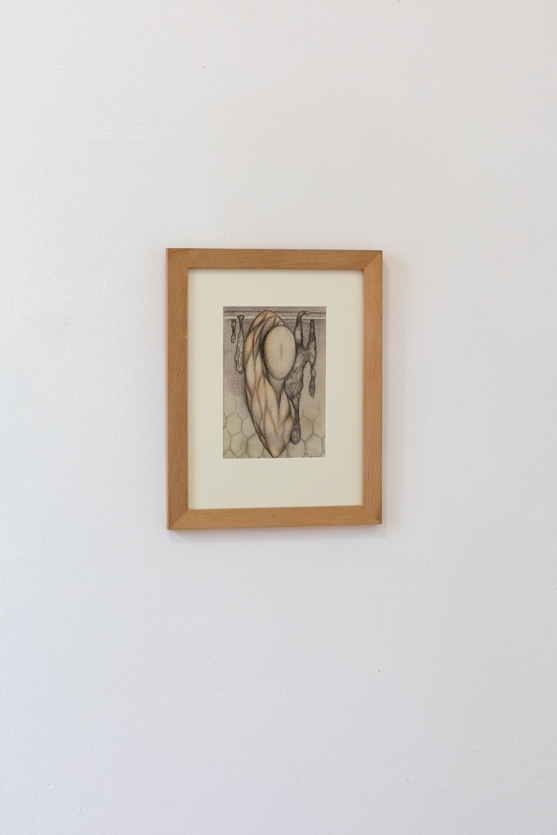 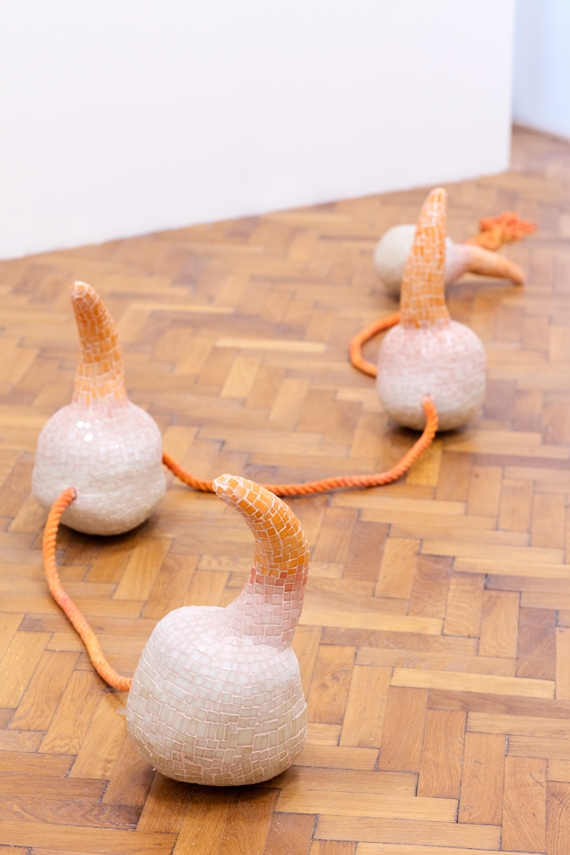 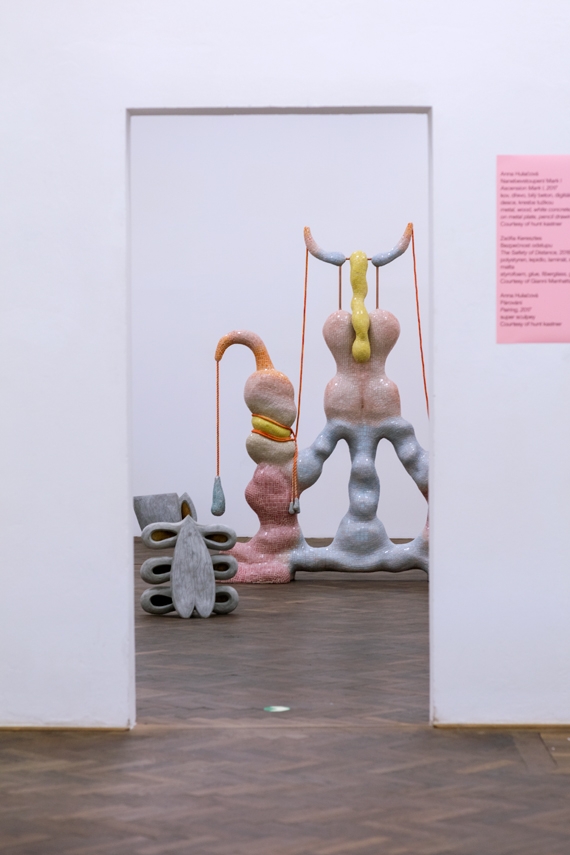 A certain religiosity is also contained in the oeuvre of Anna Hulačová. Two years ago she worked with linden wood and honeycombs; at present she makes sculptures of concrete and complements them with drawing inpencil. She refines and illustrates the raw material. Hulačová herself says about her sculptures, “There is an internal contradiction manifested by the material contrast between the contradictions of wet/dry, flat/curved, historical/futuristic, gentle/brutal.” Hulačová’s imaginary figures have faces that are usually covered by themasks that make up their characters. In the bodies of these organisms, whose forms are transformed into the form of a man, insect or plant, there are cavities where the organic substance lives: “It is the primary layer of life embodying nature, the basic essence within their bodies. Like a soul, an intangible element, which can be a kind of primitive DNA code,” Anna Hulačová summarizes her current production. 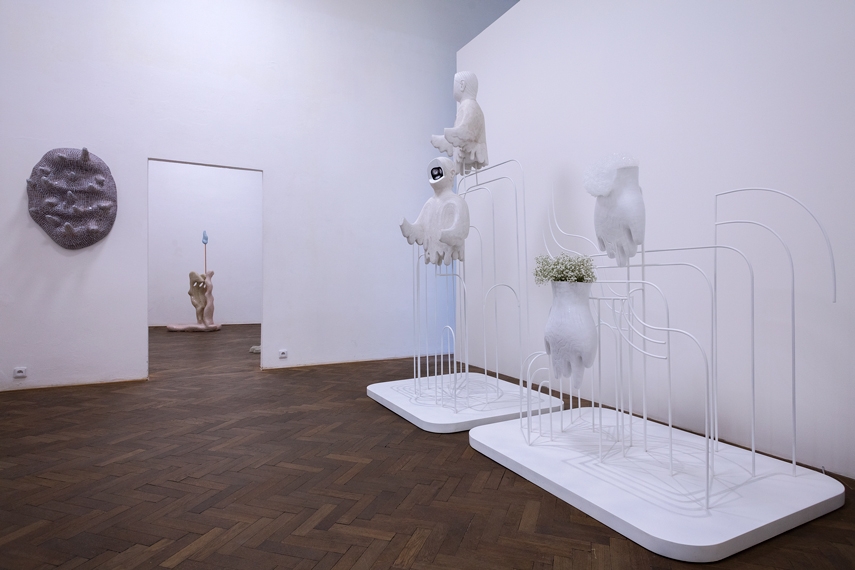 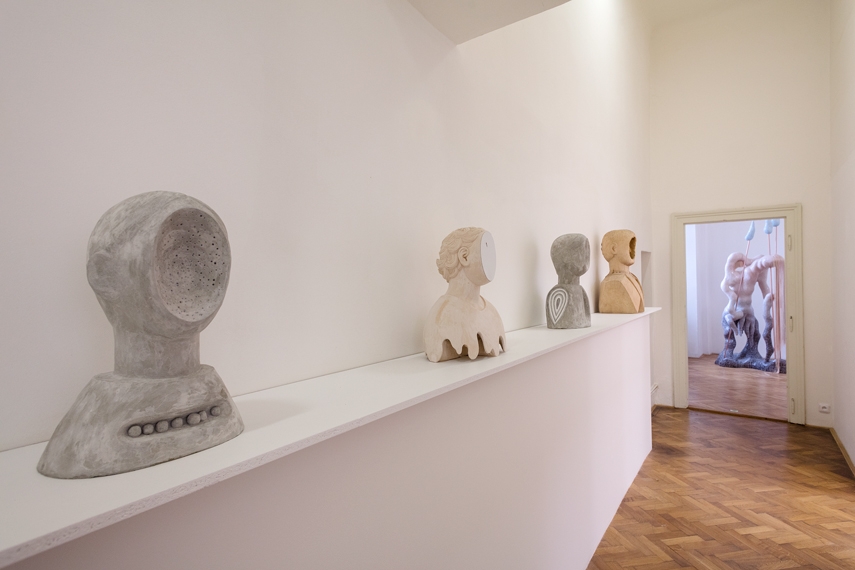 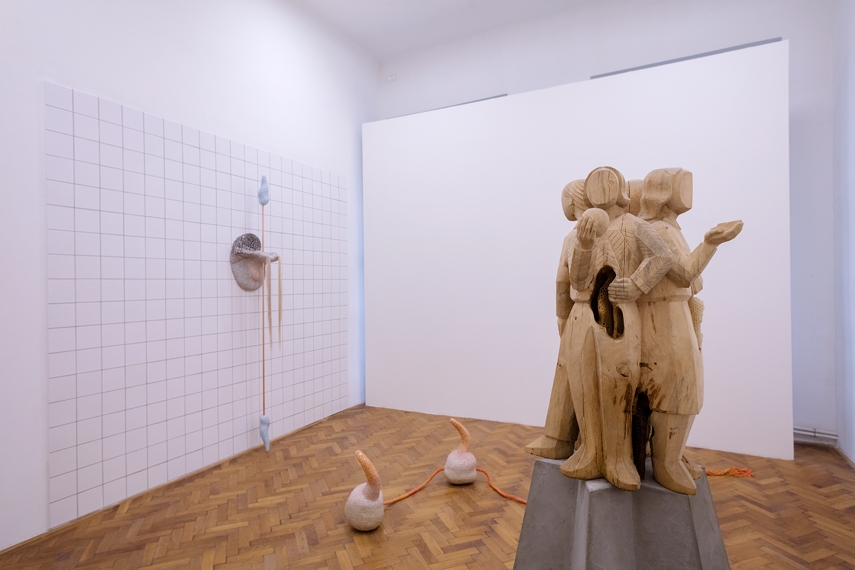 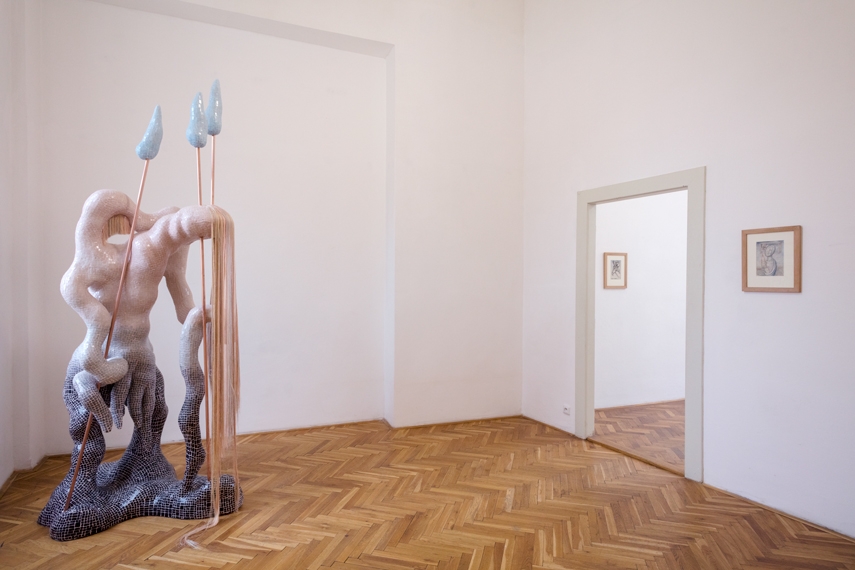 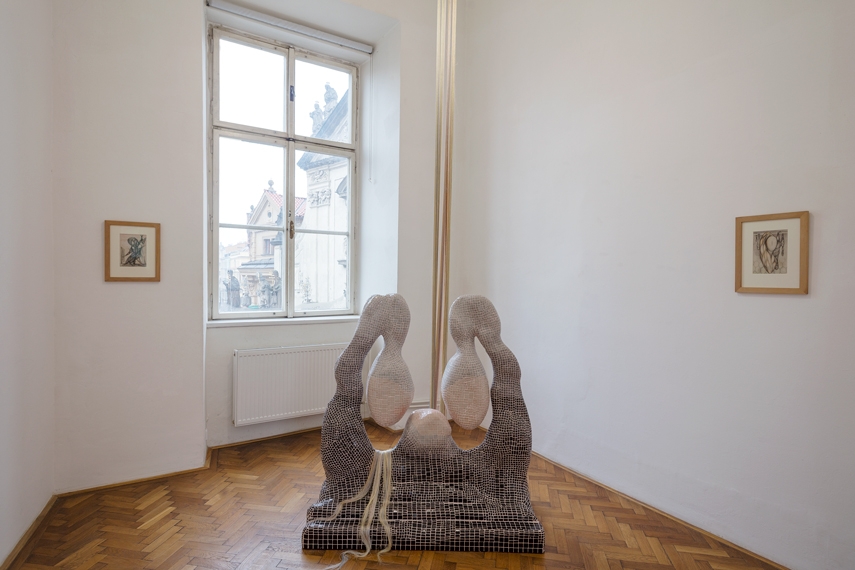 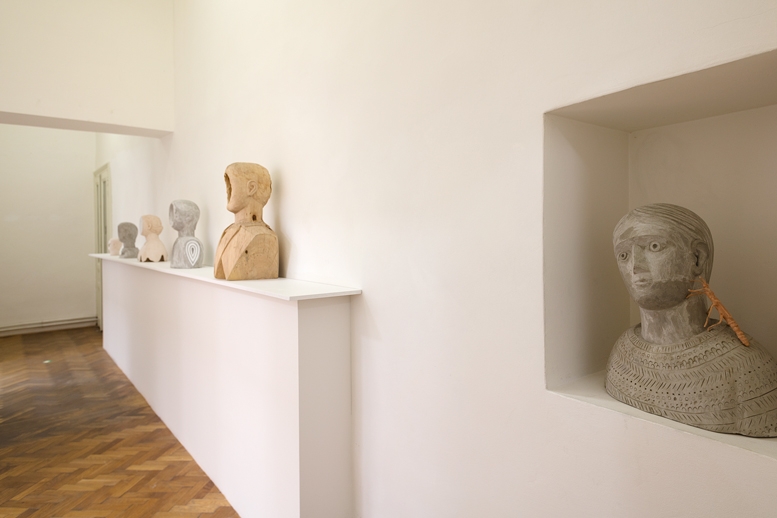 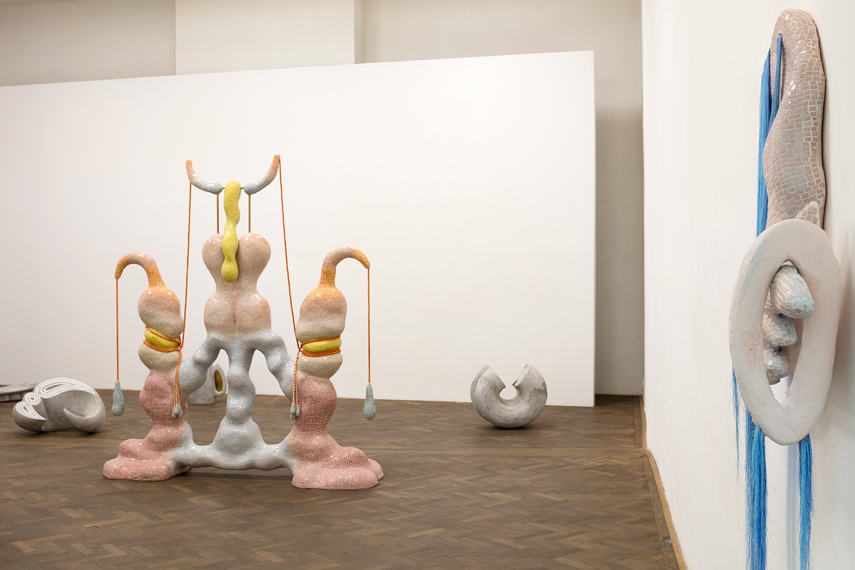 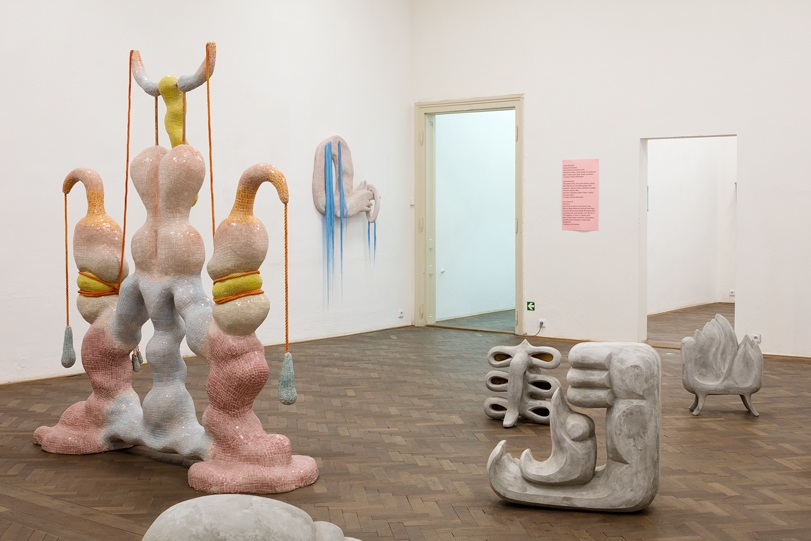 These artists complement each other. Anna Hulačová’s art is earthier, more temperate in terms of color, often monochromatic and strongly related to nature in terms of the material chosen (wood, honeycombs, sand). Hulačová develops the classical figural tradition. On the other hand, the starting point of the Hungarian artist Zsófia Keresztes is virtual reality. She opts for multicolored glass mosaics in pastel hues which cover her amorphous creatures, androgynous avatars whose pink bodies are made of lightweight extruded polystyrene, like a skin. The avatars make their appearance as warriors who have come to life in the real world. It is no accident that their name is derived from the Hindu term “avatāra”, representing the earthly incarnation of a deity. While Hulačová’s characters come from the real world, here the characters aretransformed into different forms entirely.

Zsófia Keresztes explores the theme of virtual cannibalism. Anna Hulačová deals primarily with the natural symbiosis of man and insects, which has degenerated as a result of ecological changes into “self-devouring”of mankind. Éntomos is the first joint exhibition where these two artists are meeting in person.