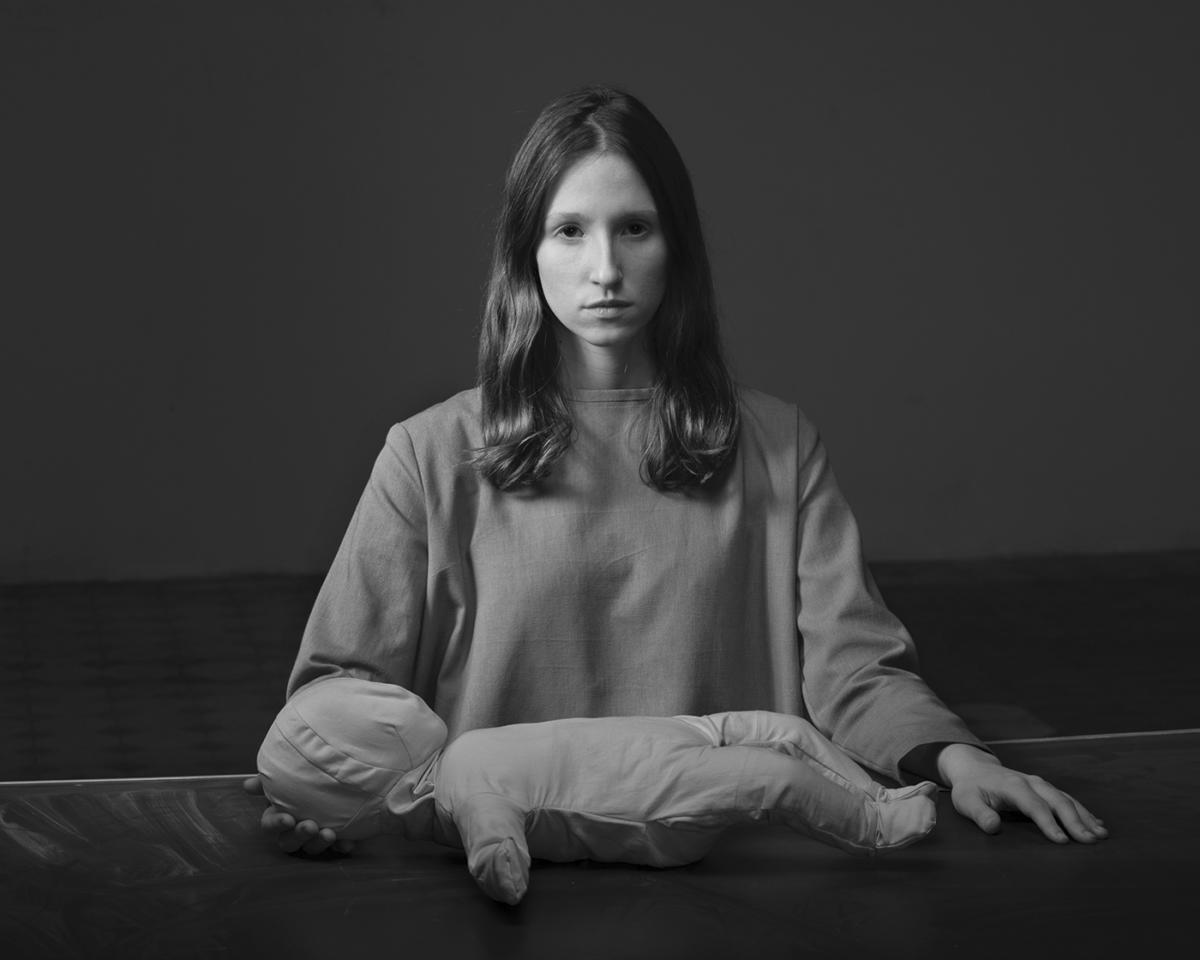 The exhibition Primary Swarm comprises two audiovisual installations by Agnieszka Mastalerz and Michał Szaranowicz: Sluice (2018), a graduation work created by the duo, and Primary Swarm (2020), made for the City Art Centre (MOS) in Gorzow Wielkopolski, a continuation and another chapter of the cycle. The microcosm of the exhibition consists of elaborately composed frames, inspired by the observation of the growing housing development Port Praski [Praga Harbour] in Warsaw. As in case of hundreds of other estates built in the current phase of capitalism around the world, Port Praski’s erection requires the erasure of several “histories.” The natural history: the eradication of a part of nature reserve and the river engineering which involves building of a sluice protecting the development. The urban history: the growing estate only resembles the 19th-century dock district and is being built upon the grounds of the former slaughterhouse, wasteland, river station and tenement houses. The social history: the multipurpose entity will be replaced by a housing monoculture, which has been made possible only by displacing the tenants and carefully selecting the new ones who could afford to live there.

The used media are abstracted from the real, the forms of representation do not refer to the source of inspiration directly. Instead, the artists propose a series of metaphorical reductions that build the exhibition’s universe on their own terms, and which, through analogy, suggest the interpretation of the world “without history,” built outside the gallery. The visual and spatial configuration of the whole exhibition is based on a specifically captured, named and processed passage of time: it resembles a minimalist musical piece. Its subject is architecture as a device for shaping the forms of collective life. Its basic formula, which enables spatial orientation, is the analysis of the moment between a movement, a flow, and a stasis, an immobility. 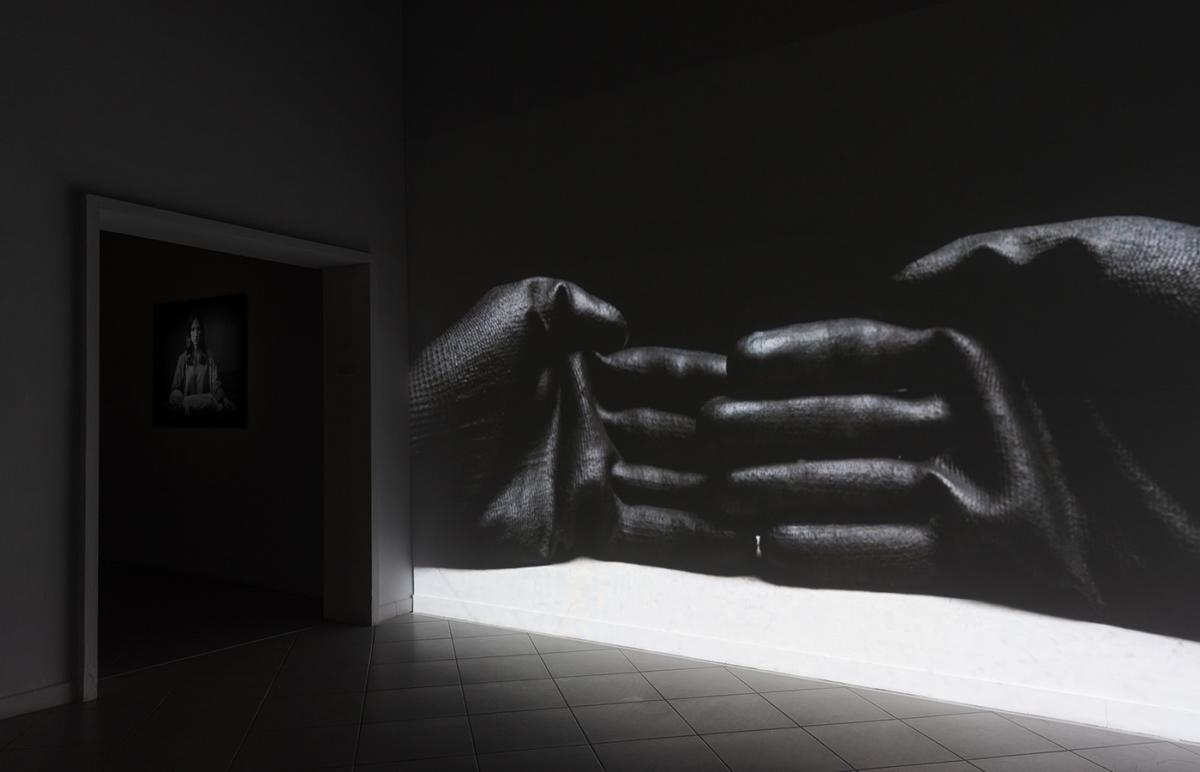 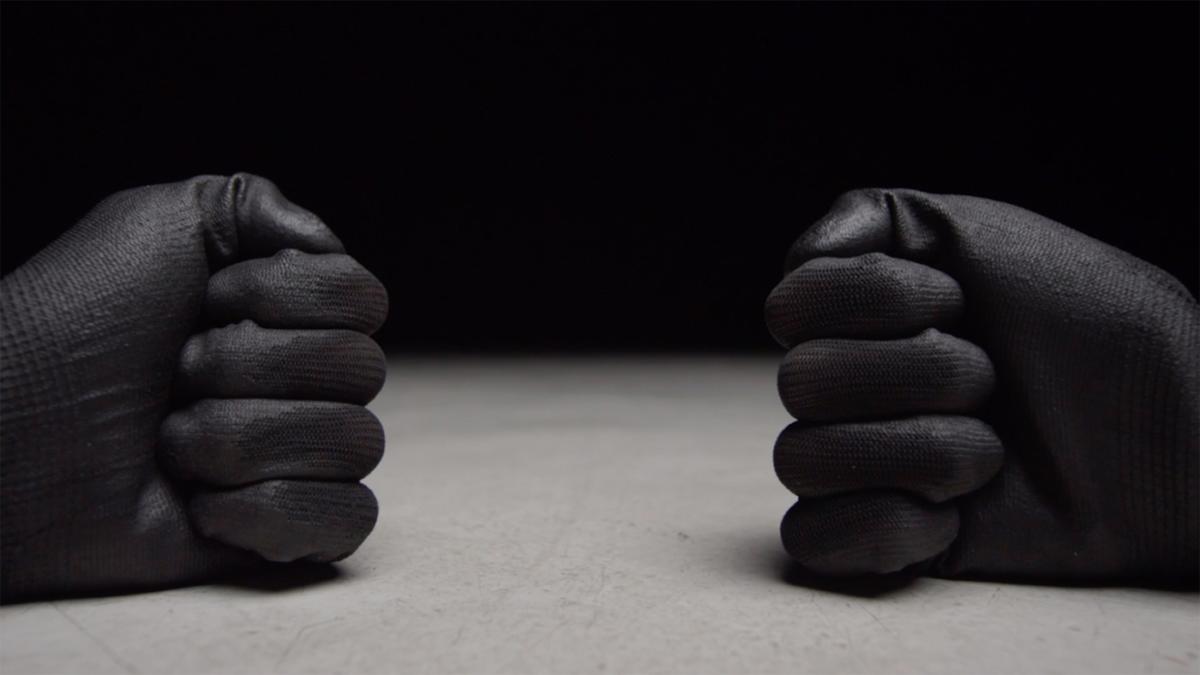 (Non-)Motion I: Flows and Outages

We enter the dark gallery. Before we become the “audience” we are just footsteps and our basic reaction is the physical movement within the space, which precedes the flow of thoughts, associations, interpretations of the exhibition’s visual code. The flow theme is expressed repeatedly: the title of the work Sluice recalls the flow of water in a canal, and the action of one of the videos comprising the Primary Swarm installation is a wind tunnel used for analysing the flow of air. The title of the latter work alludes to the bees flying out of a hive surrounding the queen bee in a swarm.

There is also an analogy between the sluice, a device controlling the water level between two reservoirs, and the way the gallery’s architecture works. The narrow corridor between the two installations restricts the flow (of the audience, the air, the blackness of Sluice and the whiteness of Primary Swarm), channels the moment of the change of “time” between the two installations. These simulate a movement through constant electronic transmission: the projection of images that work like a magnet regulating the flow of the audience between the screens.

The motion pictures seem to be the most static element of the configuration. Entering the cinematographic space, we freeze and look for an action, an event. More than a video, the projections resemble a photo collage, where the minimalist outline of the narration freezes in a timeless space. The “events” in the videos are reduced to the minimum, as if to show the two opposing mechanisms of acting in time.

The Sluice installation comprises the images of what is endlessly repetitive. Inhale – exhale. So little and so much constitutes the life of the dog from the video. Opening – closing. The process of selection and welcoming repeats itself again and again, the ritual performed by the Hands detached from life and turned into the eponymous sluice. There is also the Artificial Green: a green leafy fence, which has neither beginning nor end and the ontology of which (alive? artificial? filmed? digitally generated?) is highly uncertain. The looped images enhance the effect of the rhythmical repetition, which can refer to both the vital functions, as well as the mechanisation or standardisation of work, life, residence.

Swarm relies on an event developing in a given time. A group of Explorers traverses a cocoon-like space. Its rounded shape defines the manner of movement. The space on the outside plays the role of the queen bee. The figures look as if they had to learn to walk anew: slow-paced movement, careful gesture, the absorbing hole of the turbine where the eponymous swarm thrusts into. The movement from the point A to the point B. The other image, however, placed on the opposite side of the gallery, though belonging to that part of the cycle, counterpoints the adventurous nature of this journey. It is a photograph presenting an antihero: a child mannequin whose movement is being analysed. Here, this is how the movement occurs. An infantile body’s single achievement of acquiring the abilities to move, of defying the gravity and oneselve’s idleness is framed by a photograph, an anthropometric device that photography proves itself to be. 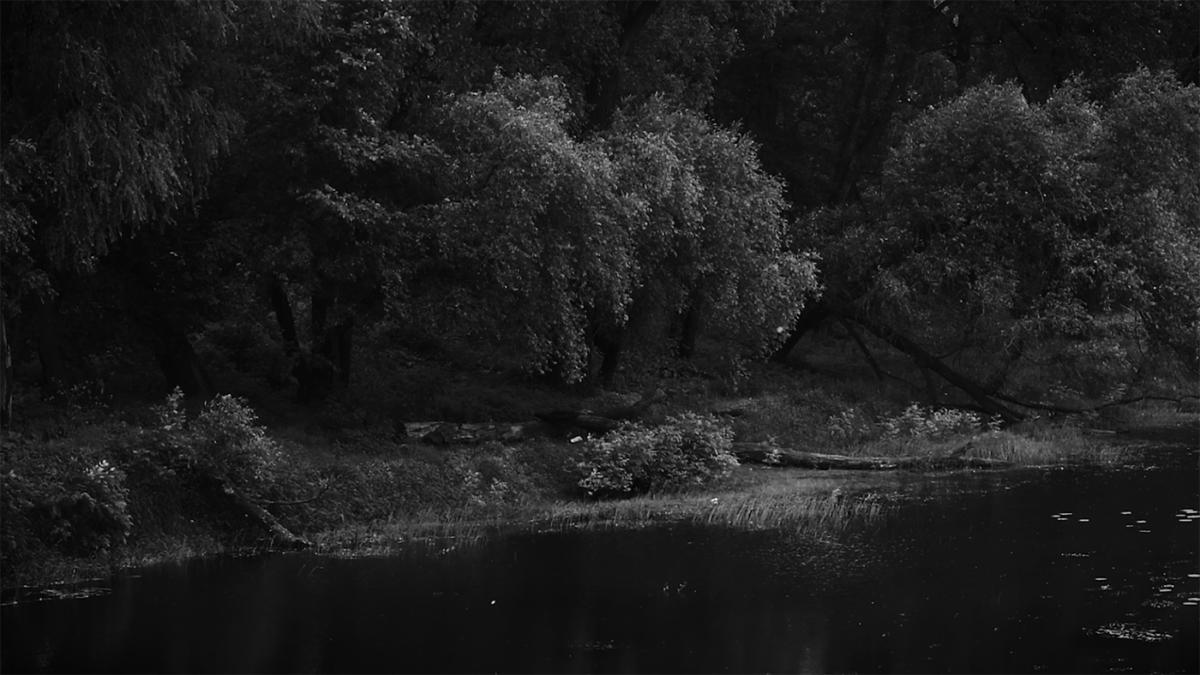 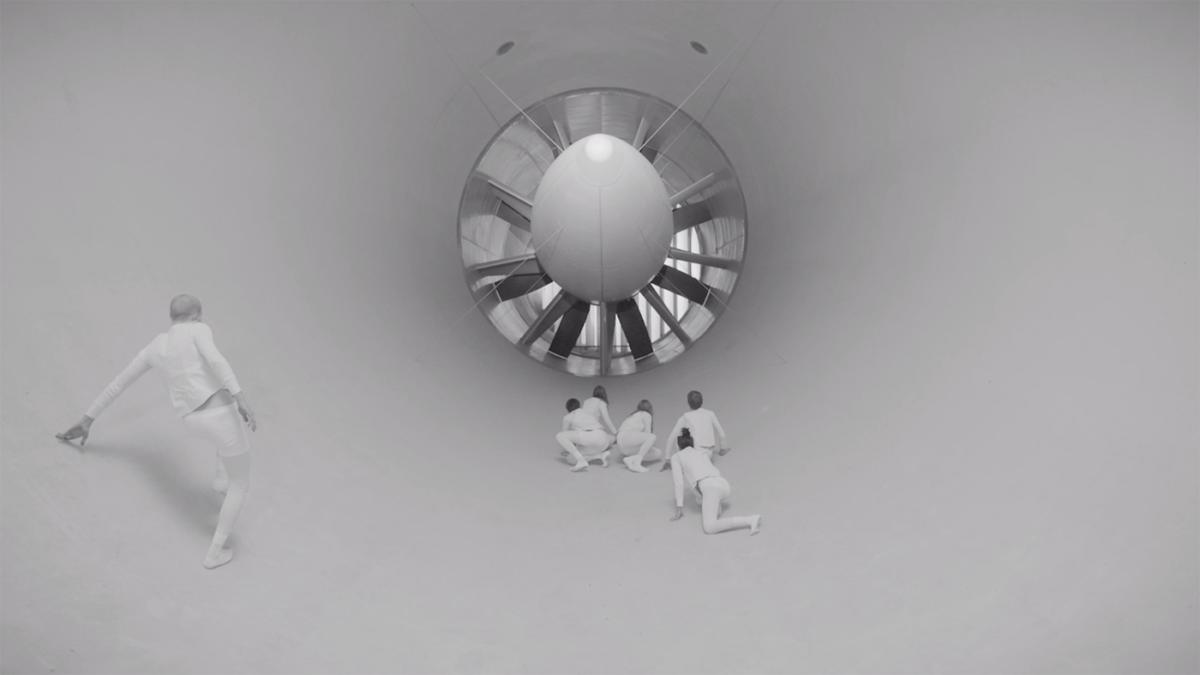 The exposition of the main subjects of Mastalerz and Szaranowicz’s exhibition is therefore constructed through an insight into the phenomenology of a moving image and a photograph, the exhibition’s space and a standpoint of the viewer. An audiovisual installation, unlike a motion picture, is not linear, the agitation of emotions or memory occurs within a space, together with the moving viewer who updates a certain score. Here I recall Mieke Bal who proposed to look for the “memory acts” in an audiovisual installation. “Memory acts”[1] are the activities the nature of which is not only transitional in the literal sense (like verbs: they require the definition of who is the agent and what is the object of the action), but which is also being realised in a space and time, like a peculiar performance in which we become, subjectively, the one who remembers to function from day to day, to create meaningful stories or revolve around the ones that exist but cannot be told, like traumas.

The rhythm of the looped images and the gallery’s space adjusted to Primary Swarm tell my/the body how it is to see an apartment before moving in, looking into subsequent rooms, perhaps full of hopes and visions about the future life, or maybe evaluating it with respect to the size of one’s wallet. A few steps forward and stop. A halt. Motion and nonmotion. Capital / property, apartment / commodity. It is another analytical moment concerning the relationship between the movement, the flow, and the stasis, the immobility, in the work by Mastalerz and Szaranowicz.

The architecture is at the same time tangible and intangible. It is tangible in the way that it shapes the surroundings we are in, actually occupies a space and transforms nature. It is intangible in the respect of the aspirations and social gentility it associates to, the commodification and the speculative value of the moving capital. Our houses and districts become the “last subprime frontiers of capitalism,”[2] organised by those who earn the biggest profit. As the inhabitants, buyers and tenants of apartments paying higher and higher rents we perform work for them, which is analogous to the labour of factory workers during the industrial phase of capitalism.

The organisation of bodies changed its formula, but the image of the yet empty estate, styled as the 19th-century docks in London, now being prepared for settling, may “recall” this factory mechanism. This trope is a point which the images of Primary Swarm installation revolve around and wither away: a paranatural observation of architecture as a form of the organised collective body. A swarm: a superorganism made of bees, an anthropomorphic sluice, shells of oysters. These are the figures presenting the state of being within a body and outside of an individual entity at the same time. 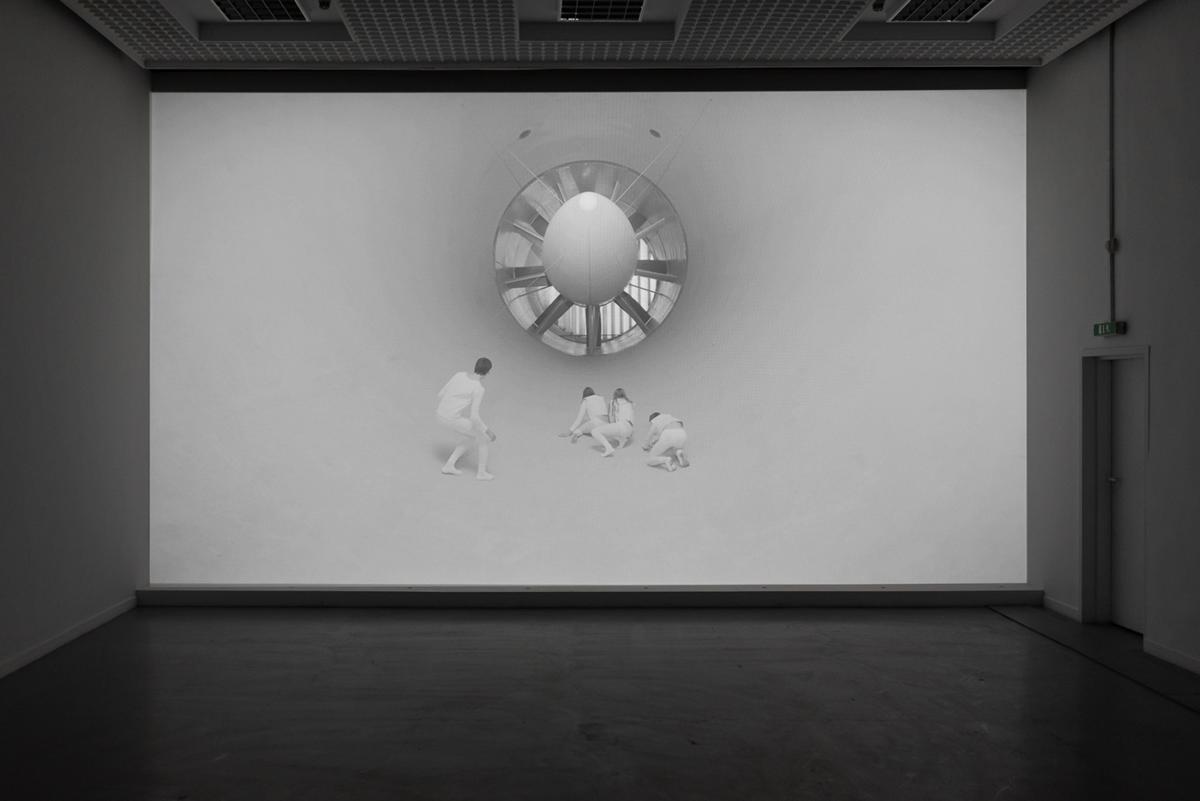 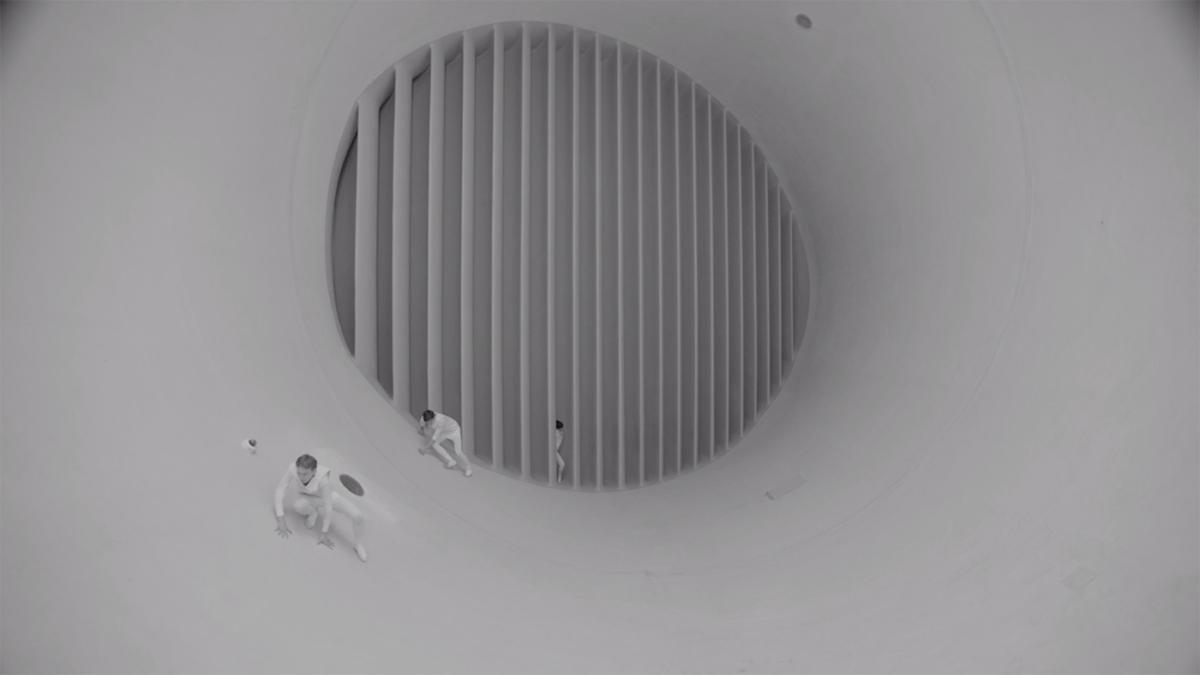 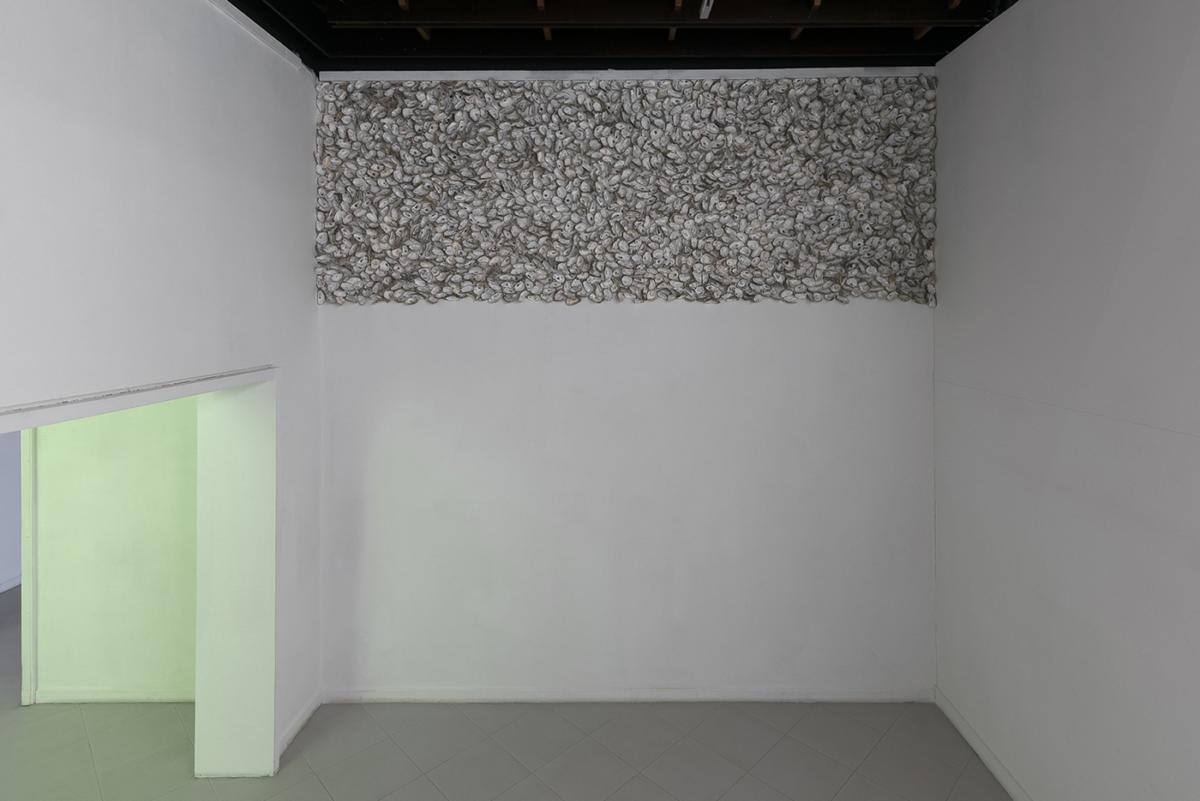 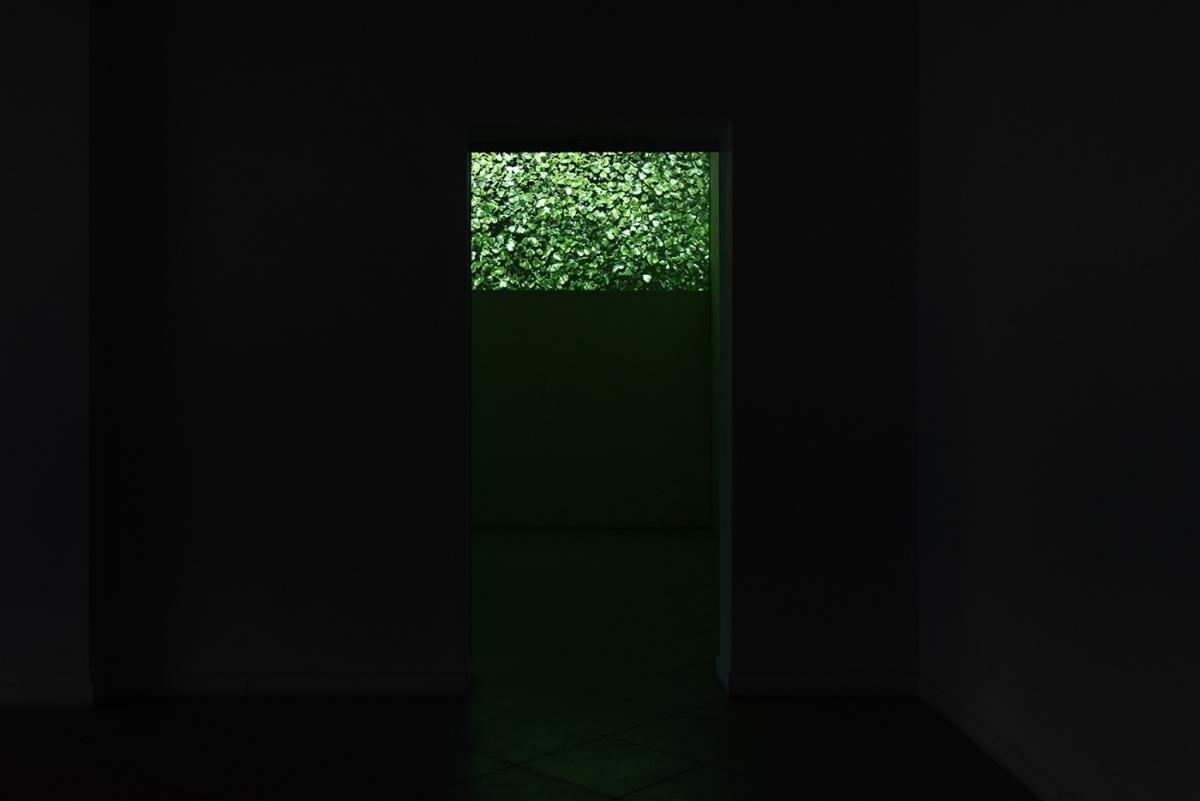 The full-lenght version of the video Primary Swarm will be on view till 30 April: 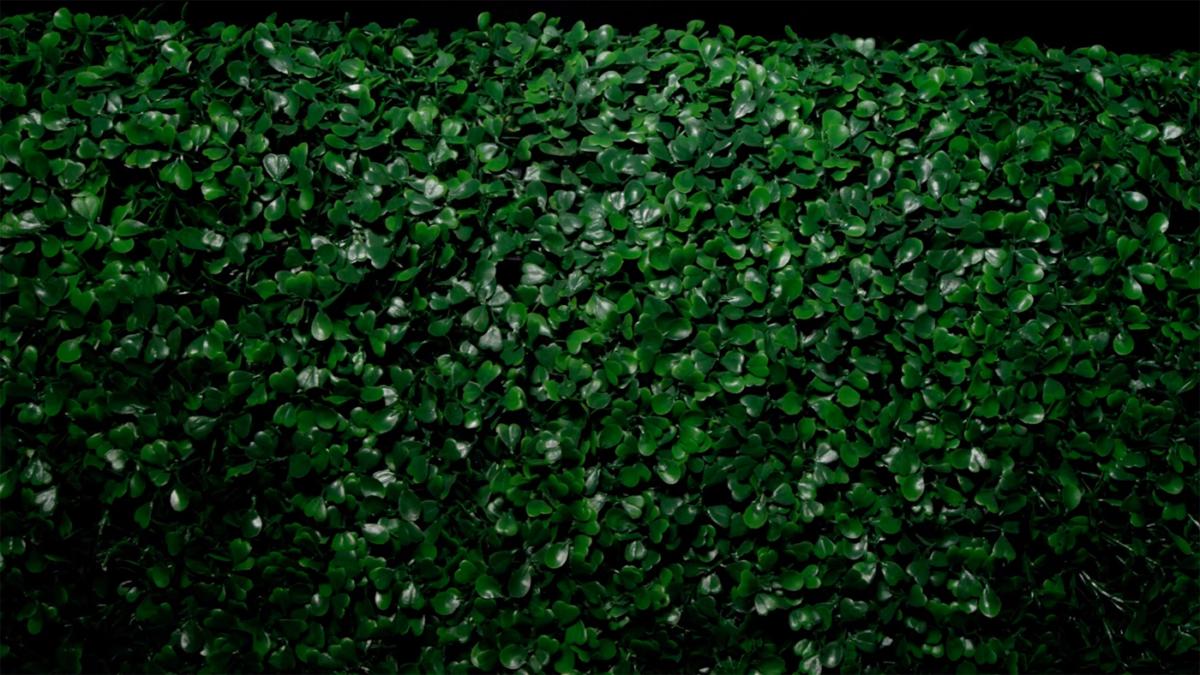 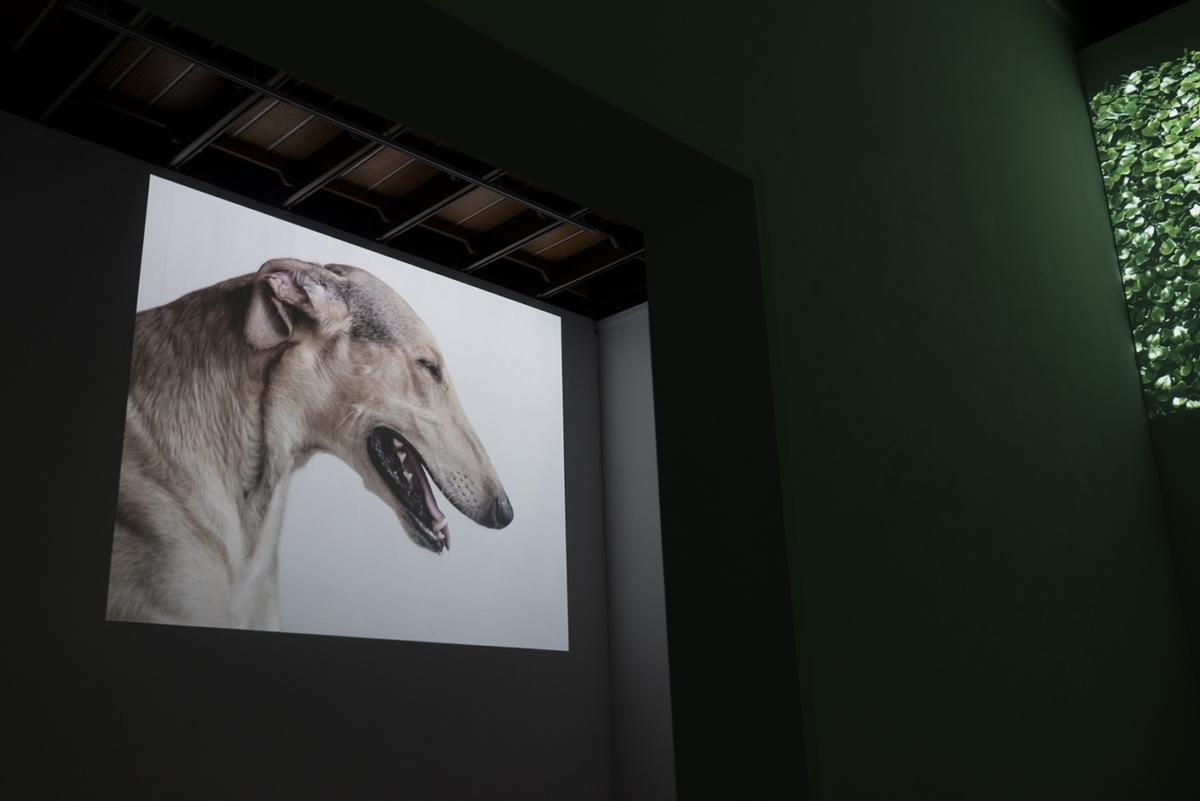 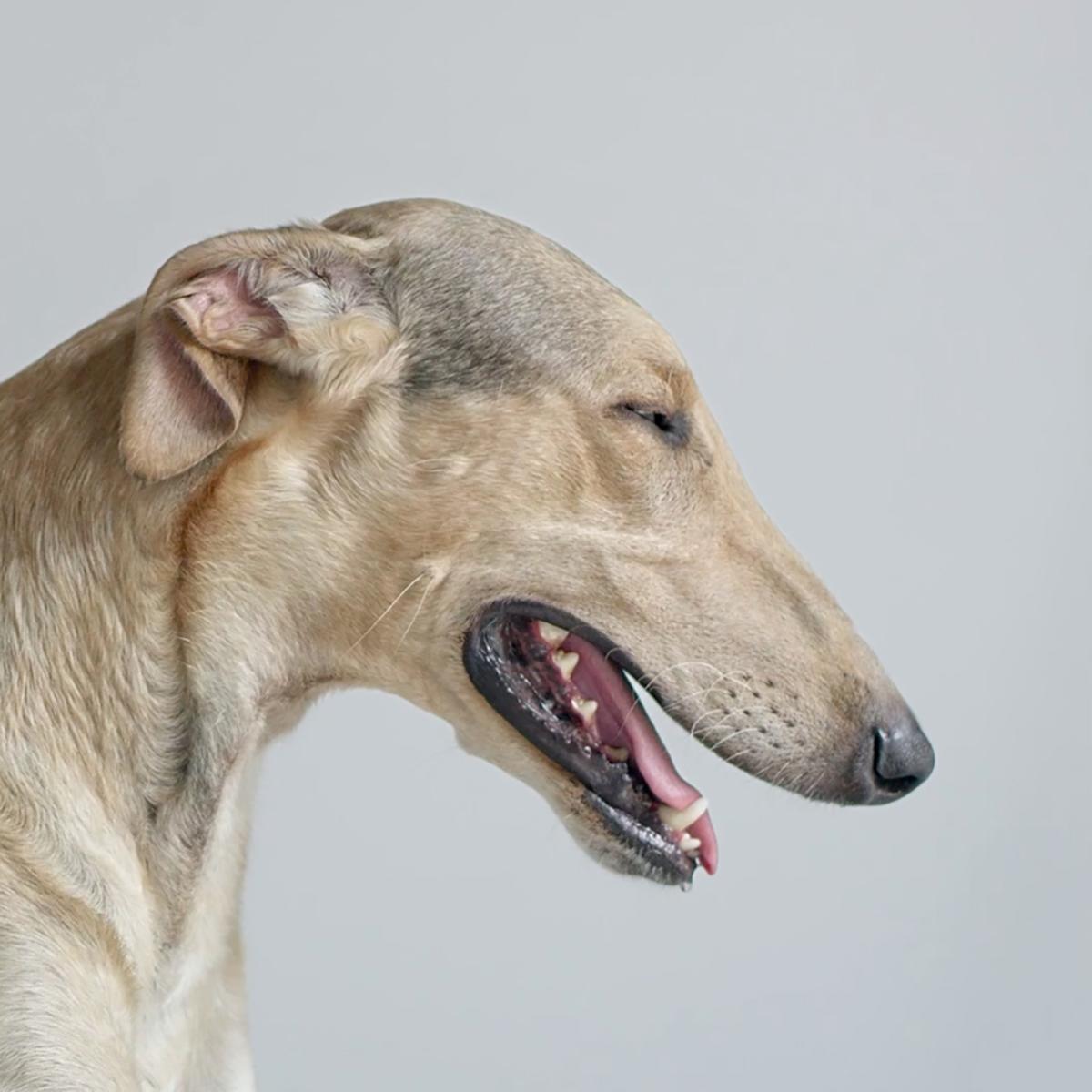 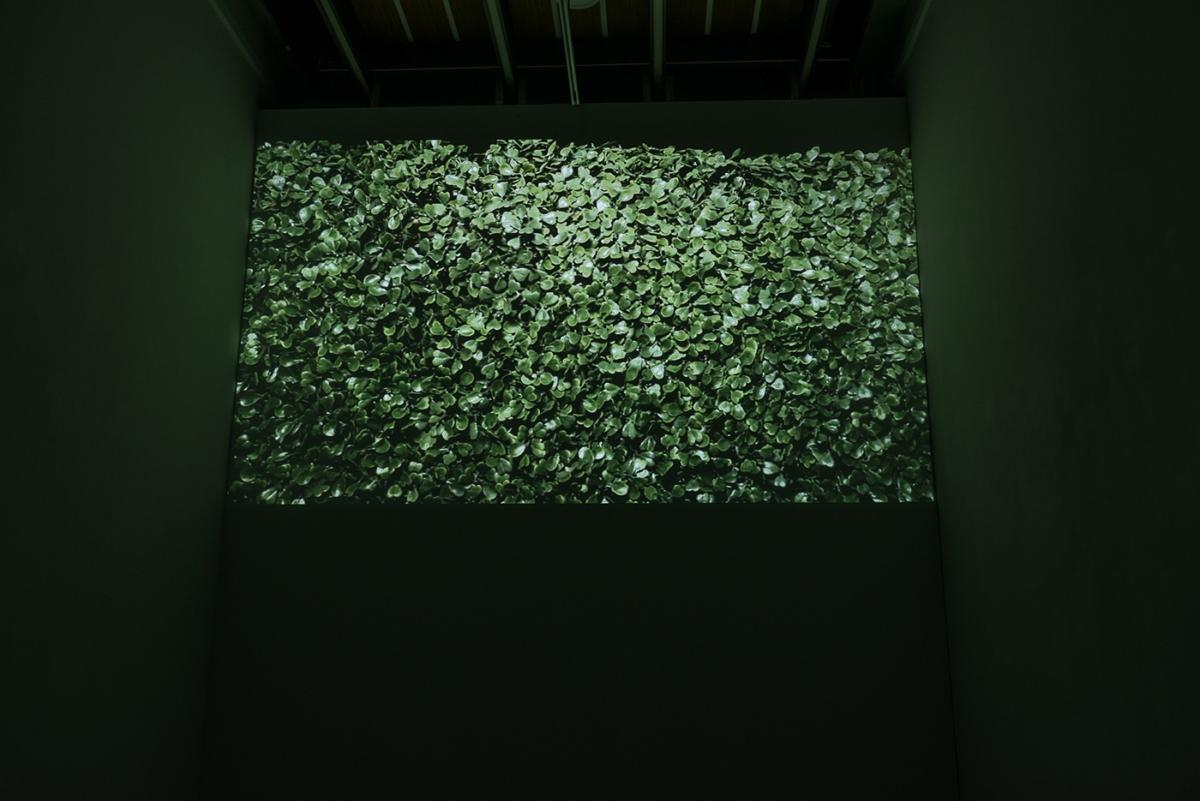