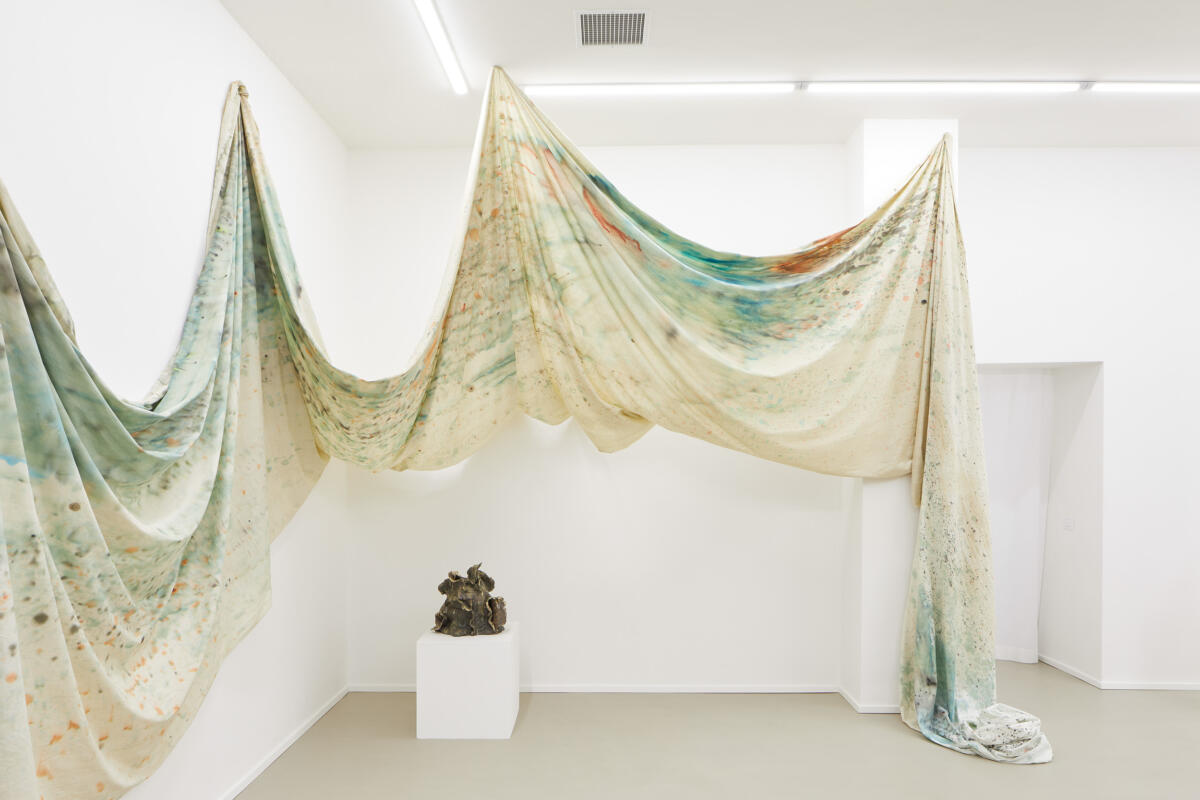 Agnieszka Brzeżańska is an artist who possesses a deep sense of environmental and cultural awareness. What attracts her is the supposed binary oppositions of what we conceive of as culture and nature.

By means of fluid, often personal trajectories, she crosses the most diverse fields of reality and knowledge. She appropriates different disciplinary fields, she goes through them in a way that is anything but linear, thus removing them from the ordinary patterns of cognition. With the intention of projecting a more sustainable future, her gaze ventures against the stream, back to the time when the vision of the universe was less fragmented and anthropoid events were seen as a continuum of combined human agency and forces of nature. It is from this context that Brzeżańska’s work emerges and is directed towards the primordial, alchemy, esotericism, archaic forms of religion, and shamanic thought, especially female.

Her work continually evolves, identifying contiguities and establishing connections between phenomena ostensibly unrelated to each other. She creates narratives where various elements come together to connect and disconnect again – the conceptual with the intuitive, the discursive with the material, the archetypal with the contingent; the past, the present and the future mix and merge in a myriad of new combinations. In the artist’s eyes, subject-object relationships are also part of the fabric of experience in which everything is linked, and the human self is always closely intertwined with the larger ecological system. It is precisely this reference plane of contact and convergence that the artist immerses herself in, and from where her work stems and develops.

Just think of her works in terracotta: amphorae with supple female forms, which evoke the images of a mother goddess and can serve as either water containers – a source of life – or as burial urns. In some cases, the movement of shapes is accentuated by a mottling of marine colours that invests the surface. Or take the risers resting on supports that resemble female breasts in incensers, made using a technique dating back to ancient Japan and intended to hold incense and herbs for burning. It is a clear reference to the artist’s experience of having lived and studied in Japan. These works, inspired by old artifacts, not only connect, like the vases, to the primary creation of human industry, but are able to evoke the principle, the most ancestral ritual practices, the sacred and mysterious beginnings of the evolution of humanity. They also imply a relationship between the dimension of making, even popular, and the mythological and archetypal forms of the feminine.

These works, incensers in primis, also call our attention to the necessity and need to care for oneself. Brzeżańska is interested in the plant world and appreciates the healing value of medicinal herbs which she knows well and cultivates. Choosing to create a tool in which to collect these herbs is also a way to allude to the possibility of actively relating to existence; to reiterate the importance of one’s autonomy, agency, and subjectivity.

On the other hand, for the artist, the functionality of these objects remains a significant trait. They contribute to giving form, consistency and meaning to everyday life, and to organizing it.

This is also the case when looking at a small ceramic sculpture titled Elf. It represents a female figure, an alien or a hybrid between a sea creature and a human being: thighs wide open with bent knees, her epidermis mottled with a watery green and her raised arms which become multiple and fluid like algae. Elf was conceived of as a support for tablets, but it is a result of a mental short-circuit that touches upon different references: the attraction for the aquatic world, the immersion in the digital present, and the perception of a female humanity placed between worlds and endowed with metamorphic powers. 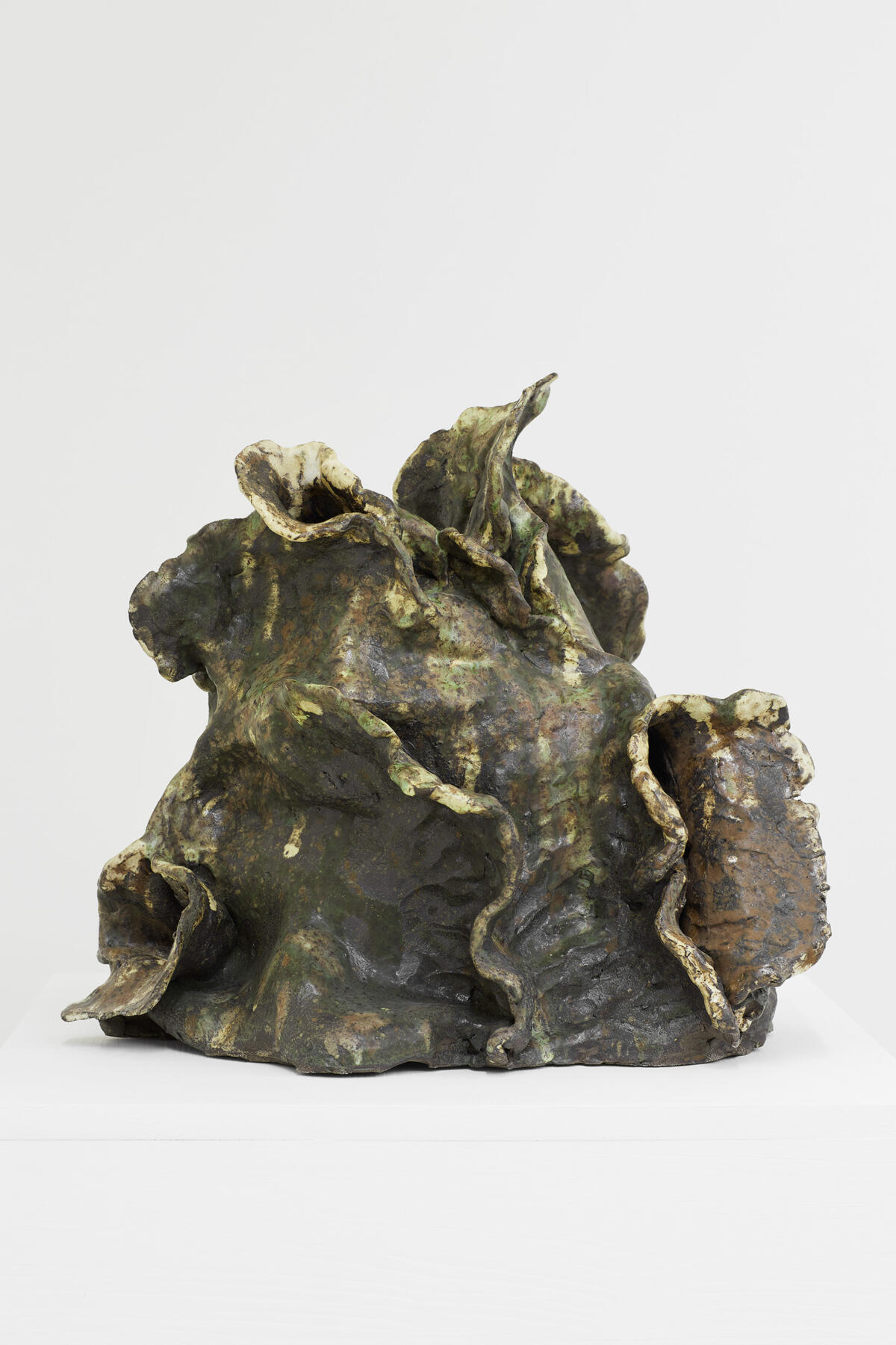 The idea of this figure that presents itself in its might, free and assertive, capable of overwhelming the essentialised female image, typical of an androcentric culture, had already been manifested in a large-scale work, The Source. It is a sculpture-fountain developed for a public space, representing a woman on a rock rising from the water.

A similar sense of an eruptive energy emanates also from a small sound sculpture Singing with the mountain meadow, in which the only rock is accompanied by the singing of a female voice of great vitality. The work has an ambiguously organic character: the form is sinuous, made up of solids, voids, fluidity and interstices, almost as if it were a synthesis between organic and mineral, with a psychological connotation. In other words, it is a yet another way of representing the fluid continuity of reality. On the other hand, these works are characterized by a sort of immediacy that is expressed through their marked tactility: it is the power contained in the concrete making of hands, which, as indicated in Elf, is accompanied by that of the mind and technology. All this, however, is expressed without a trace of seriousness or gravity. Brzeżańska’s work is laced with irony and humour; just think of her Sneaky Fingers: long, sinuous, feminine, glazed fingers in shiny ceramic evoke the ability to examine objects, to manipulate them. The long fingers seem to channel a magical energy, an ability that is as much spiritual as it is cerebral. It is clear that Brzeżańska is confronting herself not only with the body, but with the psyche. Brzeżańska’s humour, like her constant diversion and deflection, is an expression of alternative approach, a critical strategy that is not comprehended through utterance but through intuition and deeds.

Doing and making things happen is an imperative for her, and from there comes her idea for an artistic, radical residency that the artist organizes annually: a period of a frugal communal life on a raft that runs along the Vistula river, immersing the participants in a deep and intimate connection with the environment.

The Vistula Fabric is a piece of work which originated during one of these fluvial expeditions in 2018: a canvas that stretches for over twenty-four meters, streaked with blue, green and brown. It is a fruit of the fertile capacity of water and its current combined with the medium of a raft, which allows the cloth to be submerged and to come in contact with the vegetative compound of algae and microorganisms. After resisting the tearing of the current The Vistula Fabric carries with it the memories and traces of water, of time, of movement, painted by the nature.

As traces are the abstract forms of her paintings and tapestries. Forms sometimes sinuous, ecstatic, dancing, sometimes diaphanous in their almost monochromaticity, and volatile as thoughts, light as ghosts: Mind Playing with Thoughts; sometimes, as in the jacquard Water Spirits (Fauna), they are vibrant with energy realized through vivid colors; always mental and physical at the same time.

Thus, Brzeżańska’s work manifests itself at every step as an active, affirmative way of thinking about the world, its possibilities, trajectories, and in its variegated multiplicity. Her works also contemplate and envision humanity as part of a more complex whole, in perpetual becoming. They articulate a desire to escape the logic of fragmentation and the hierarchy of forms of knowledge; with the awareness that among the most precious antidotes to a uniforming normalization is an exploration of the permeable boundaries between human and non-human things, and the physicality of being and doing. 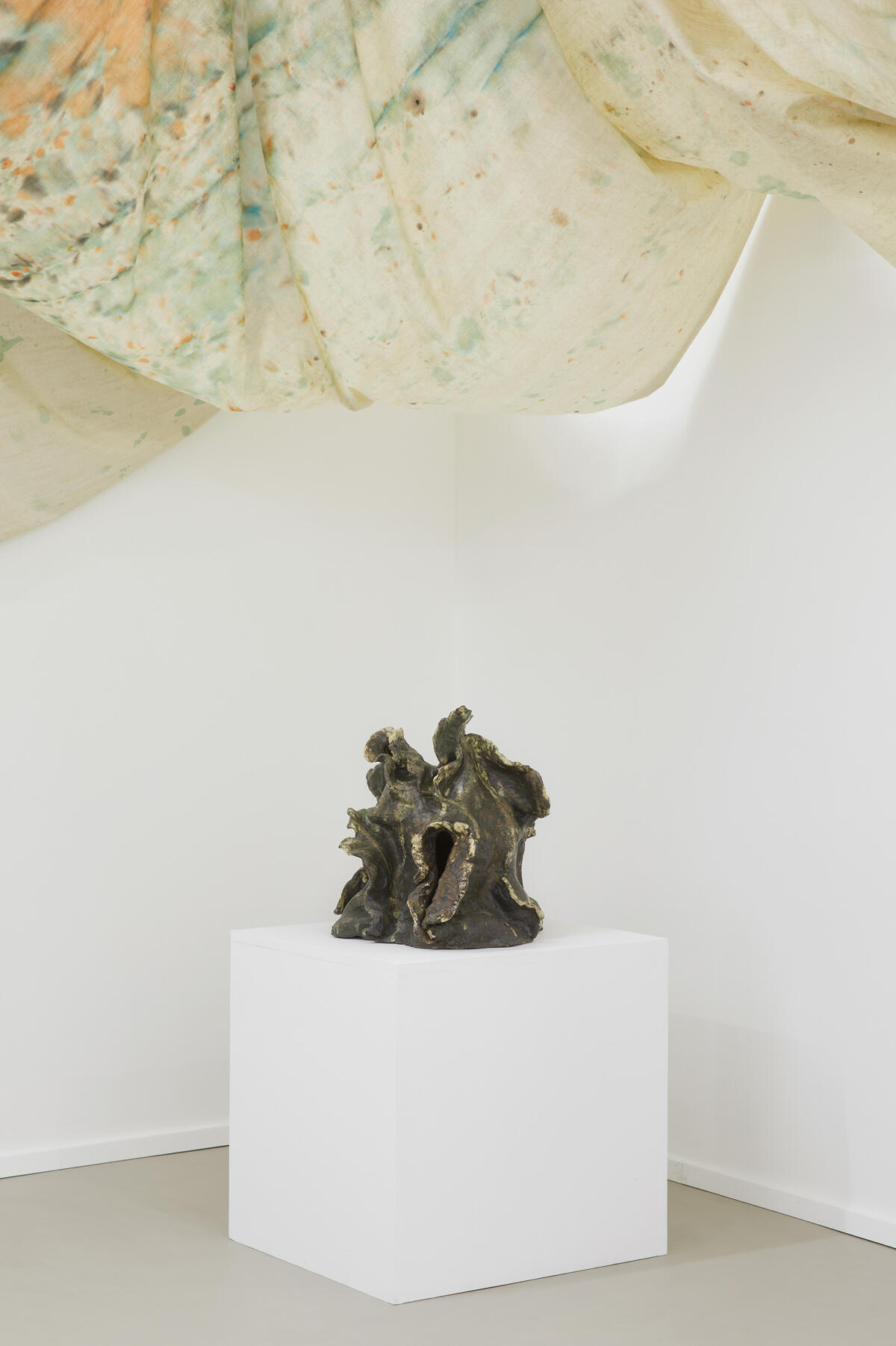 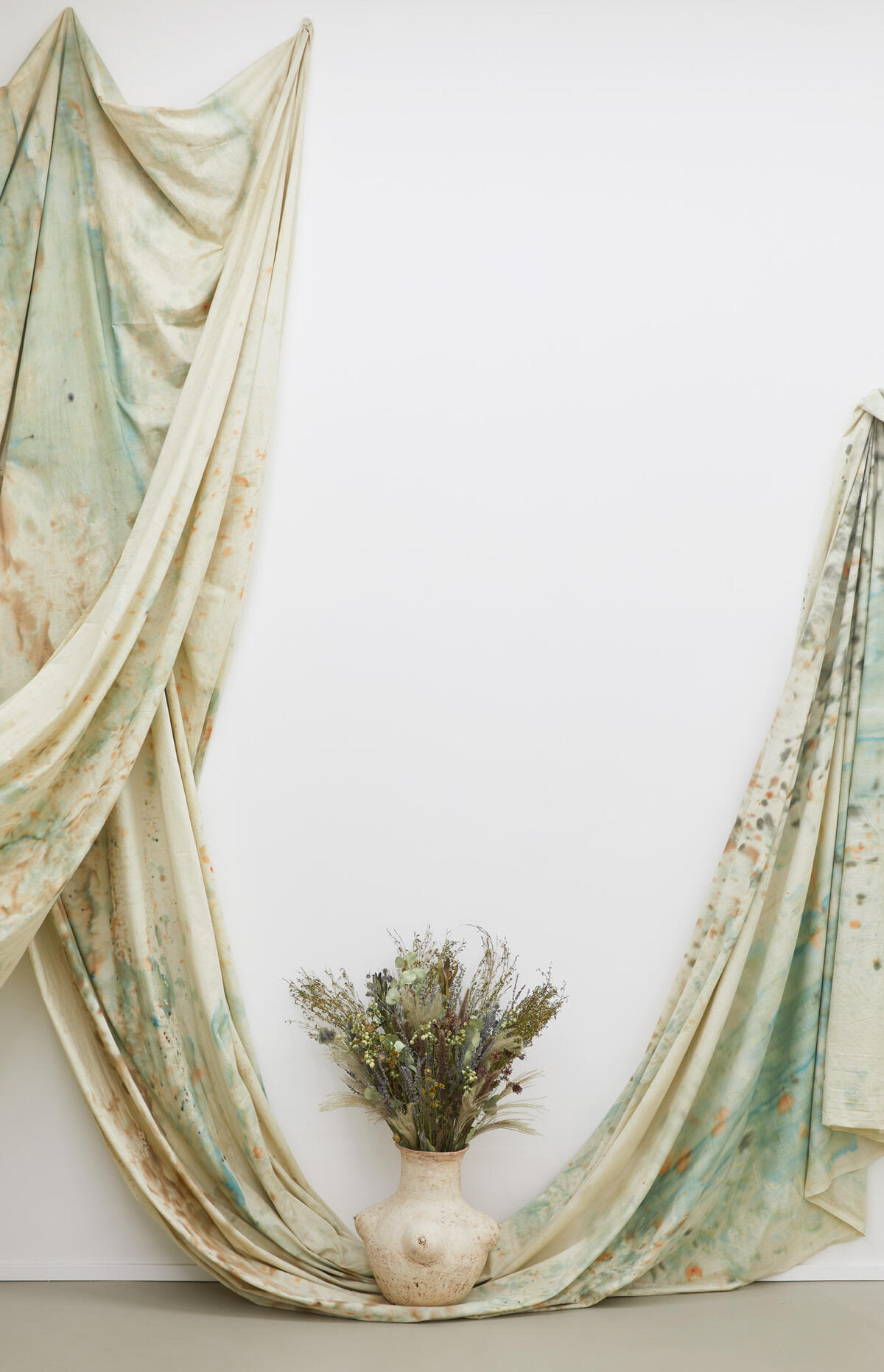 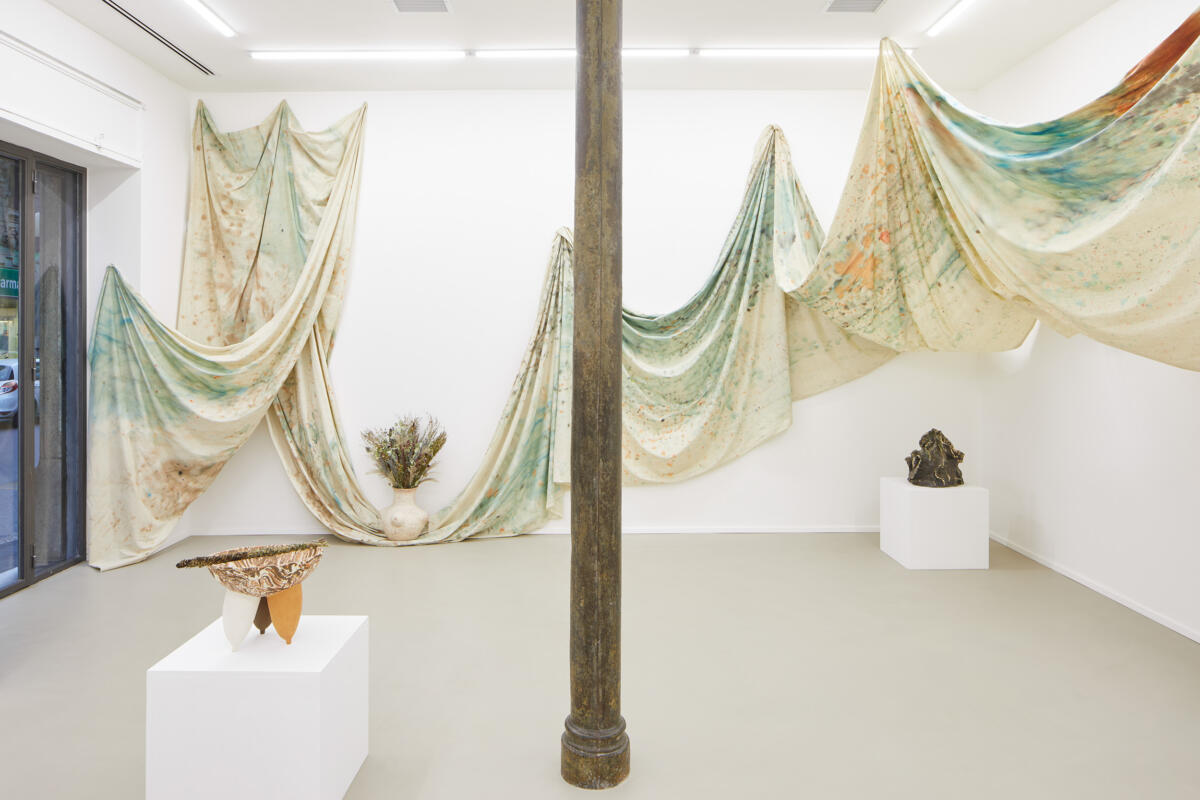 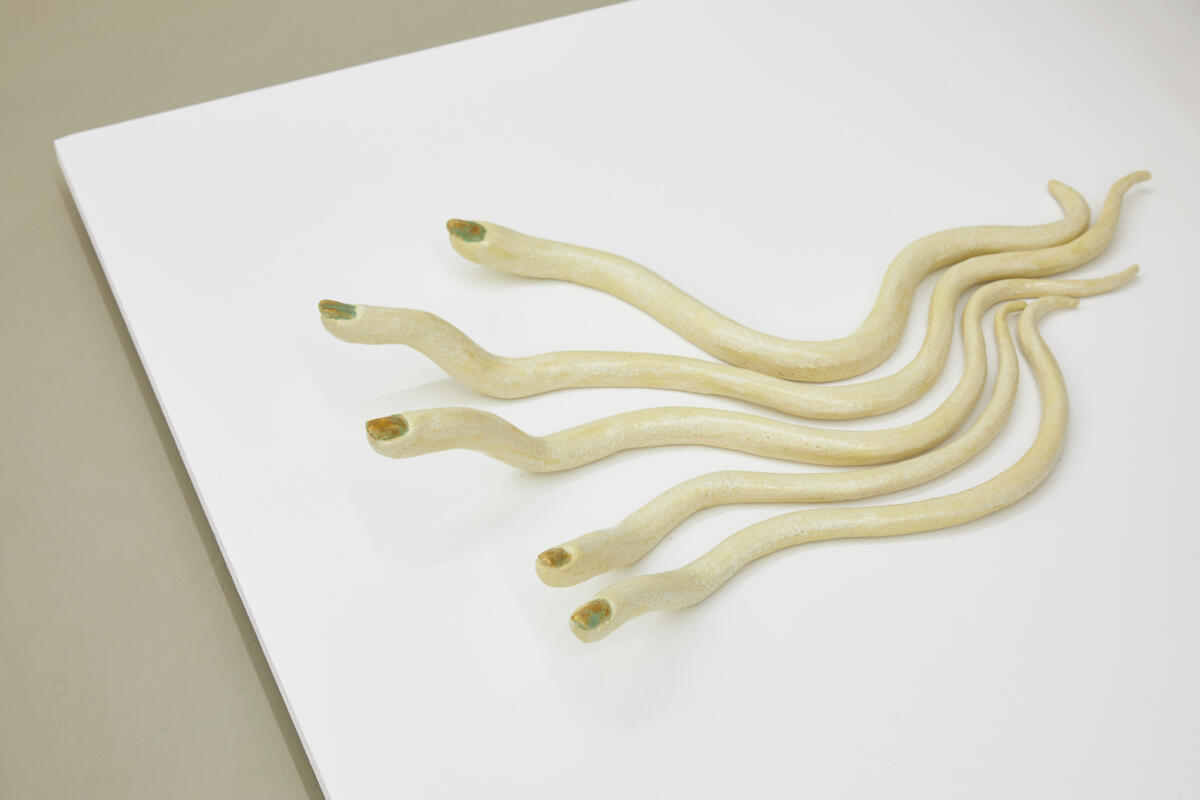 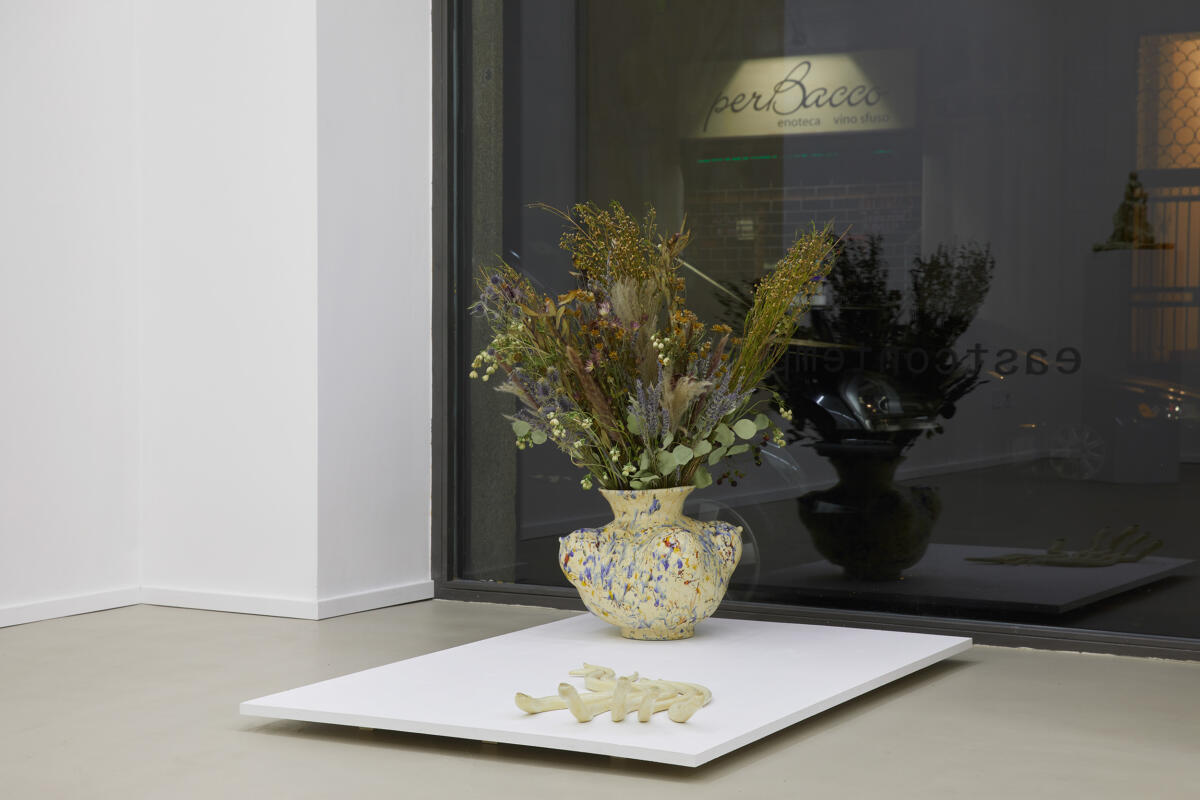 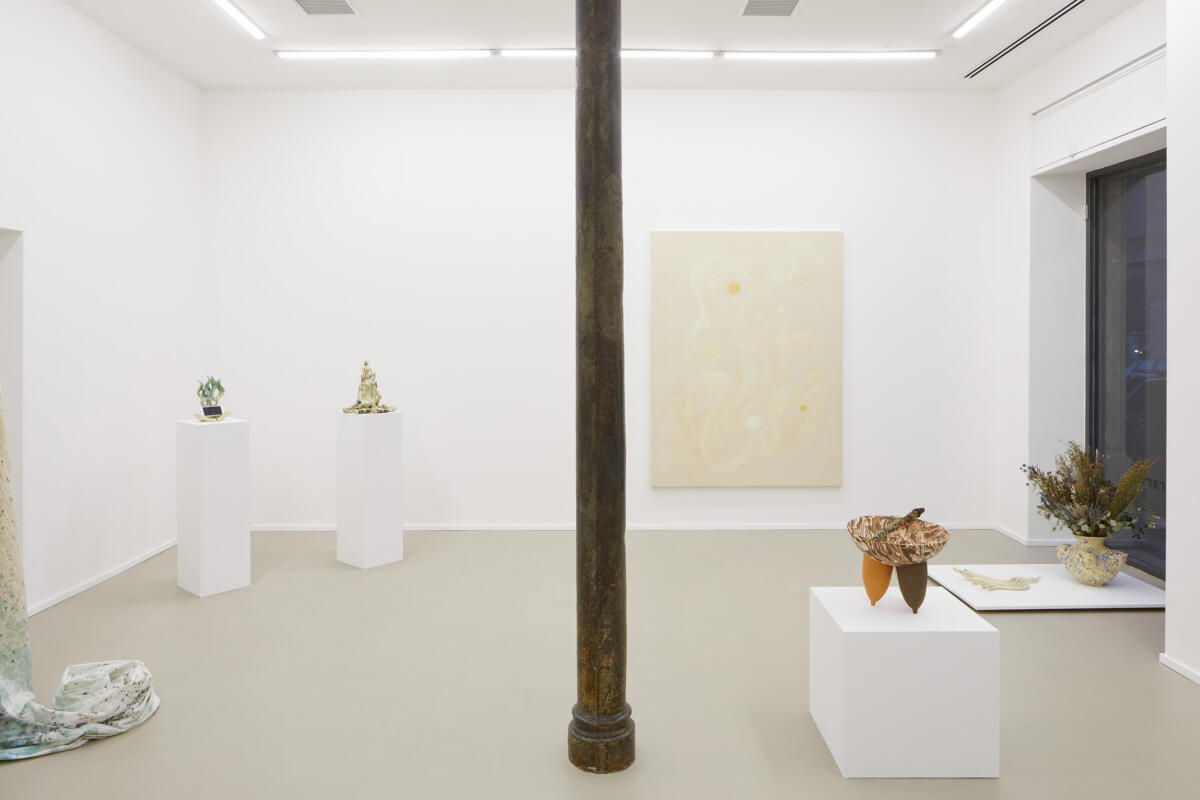 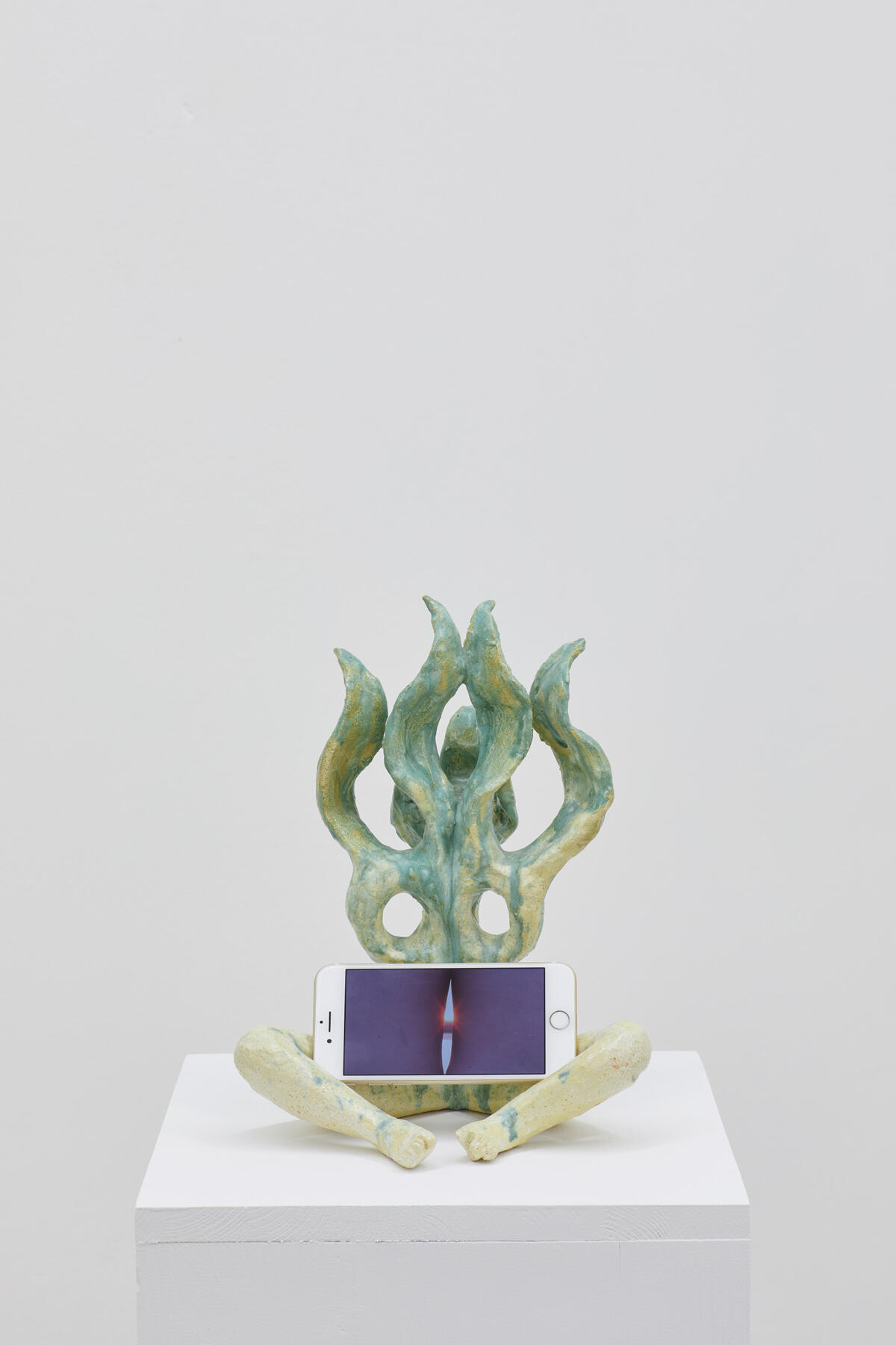 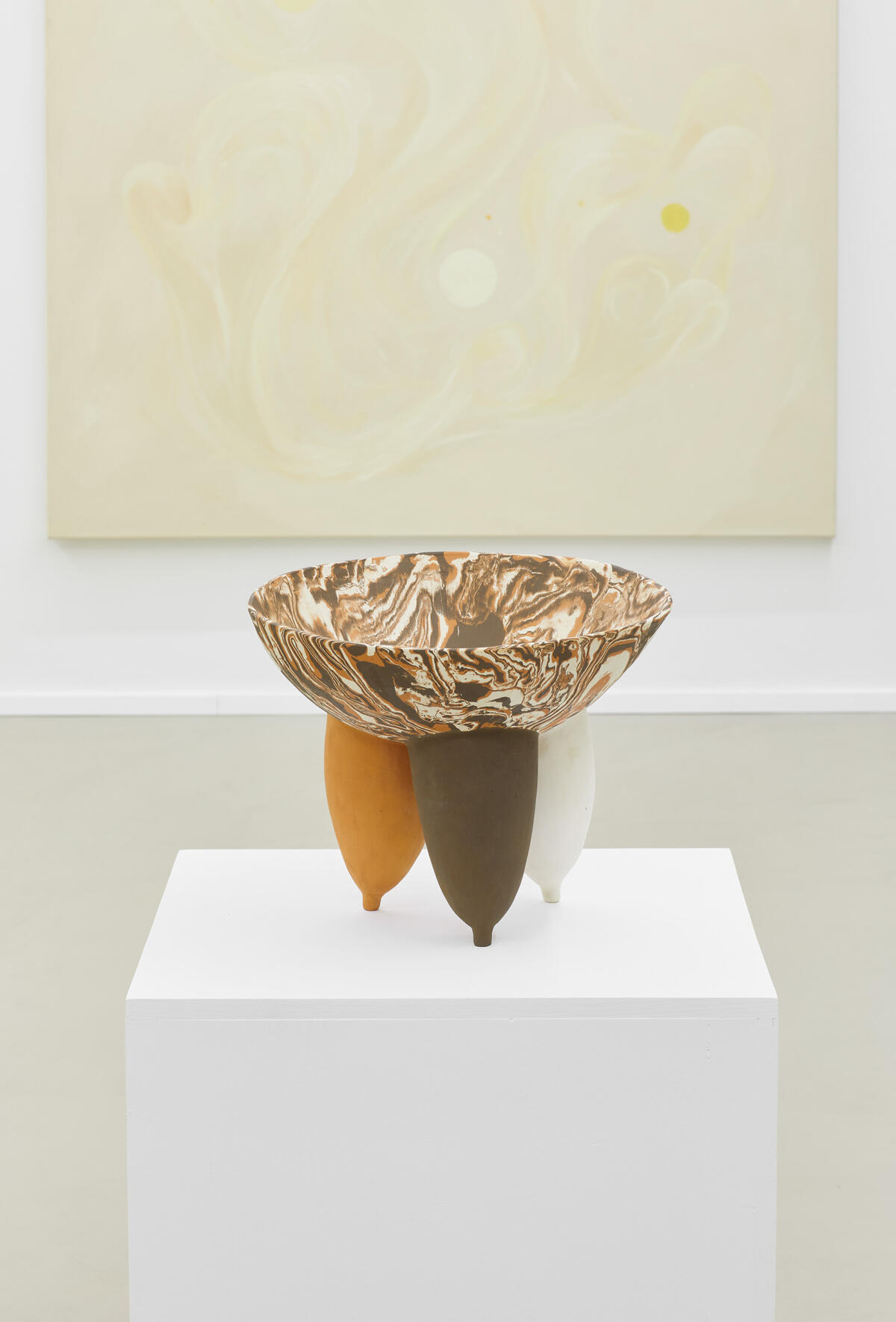 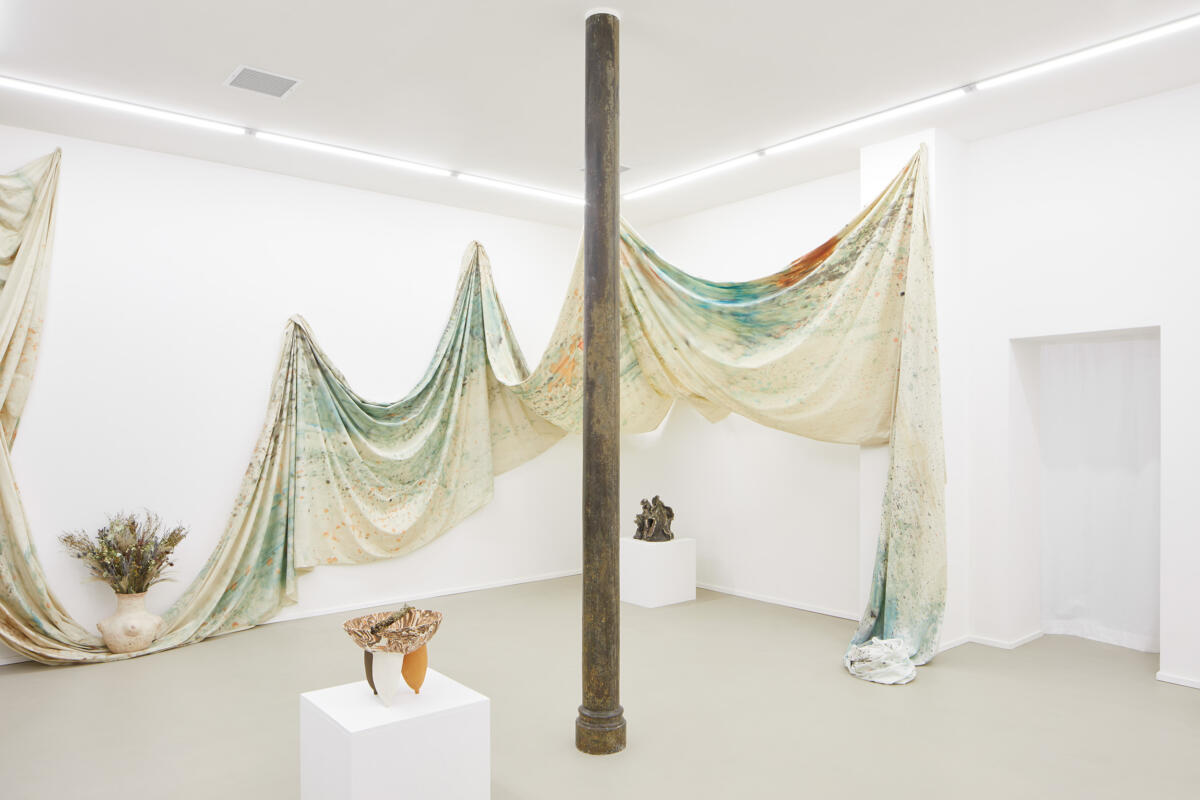 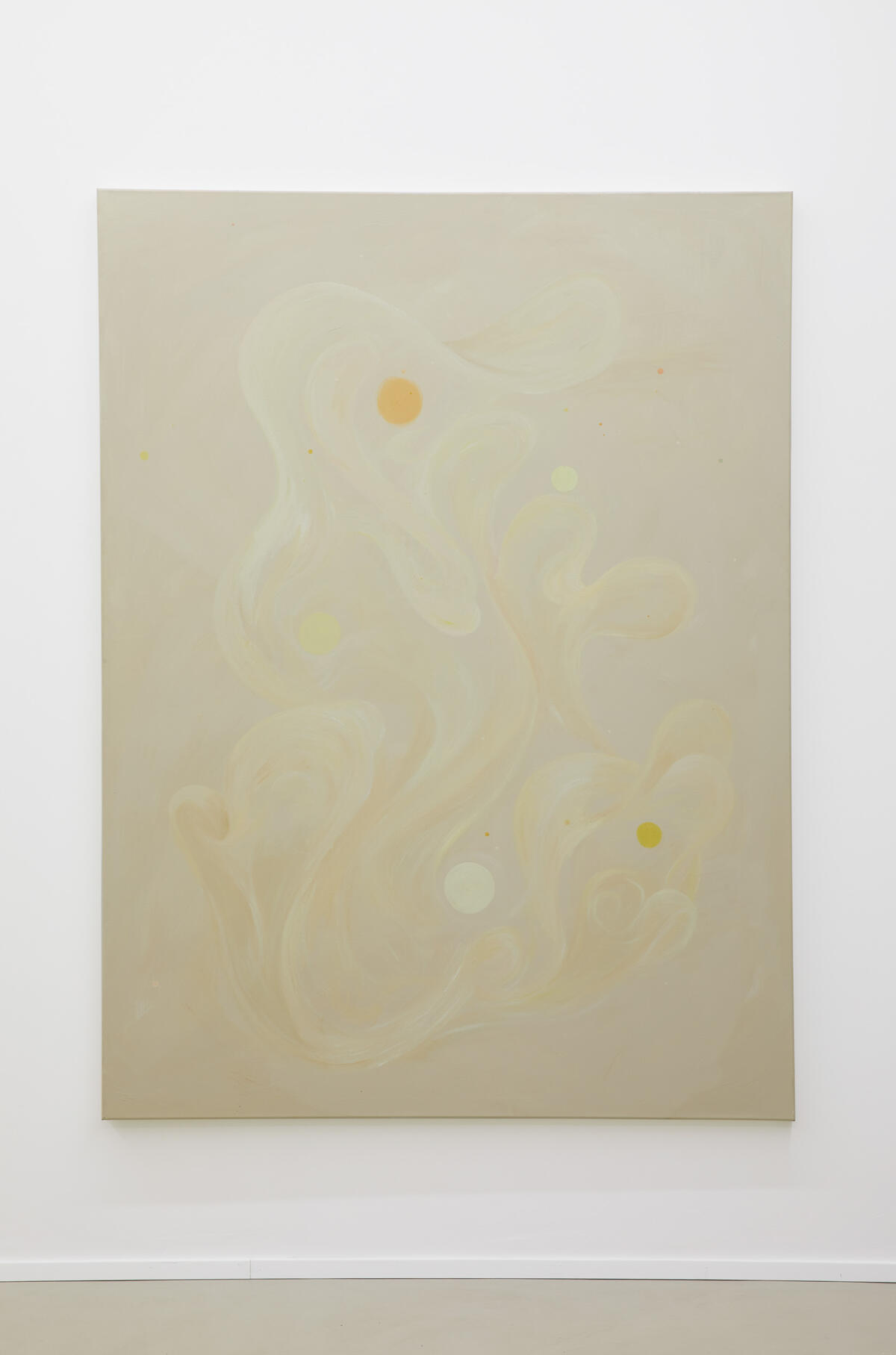 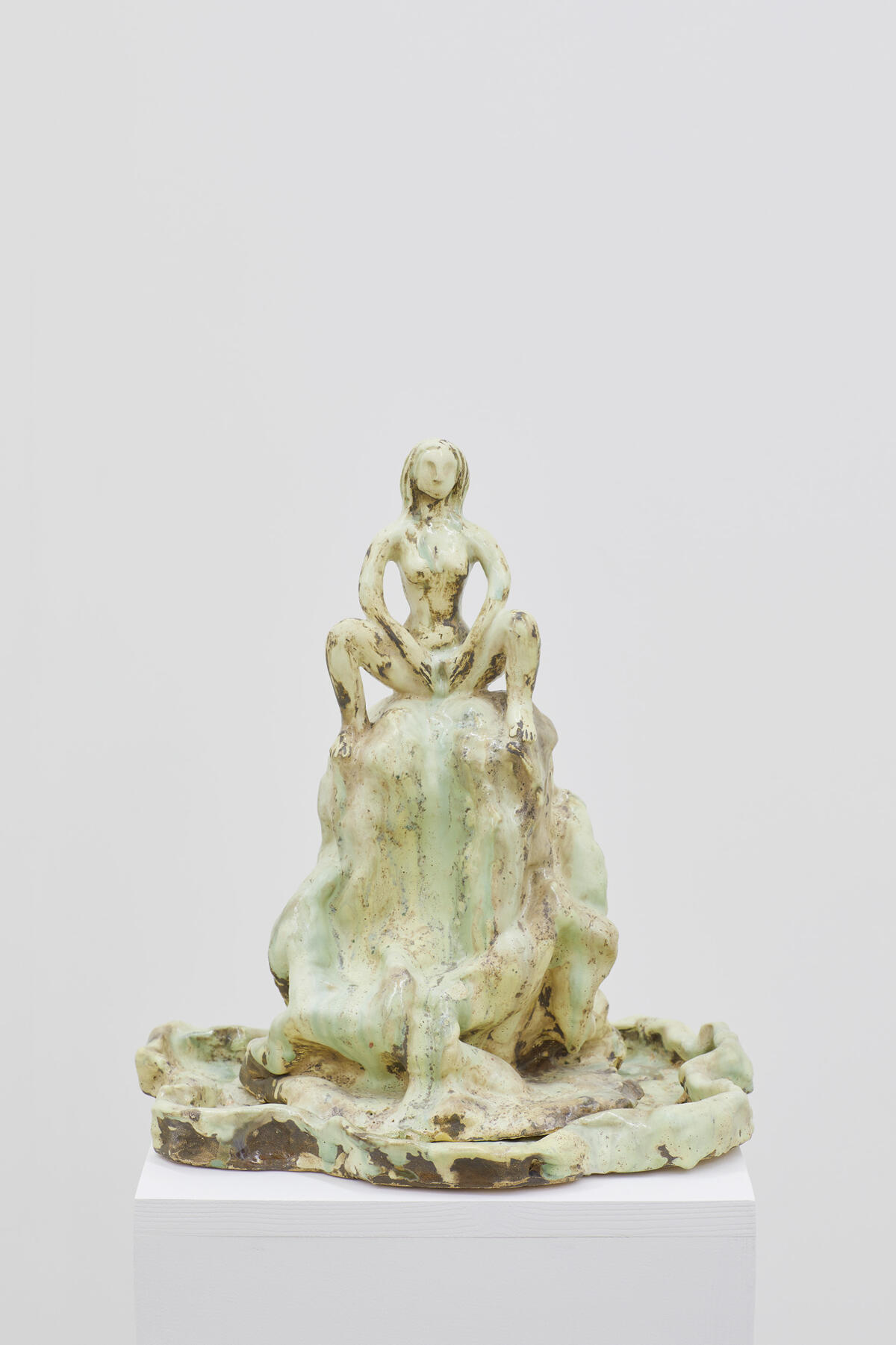 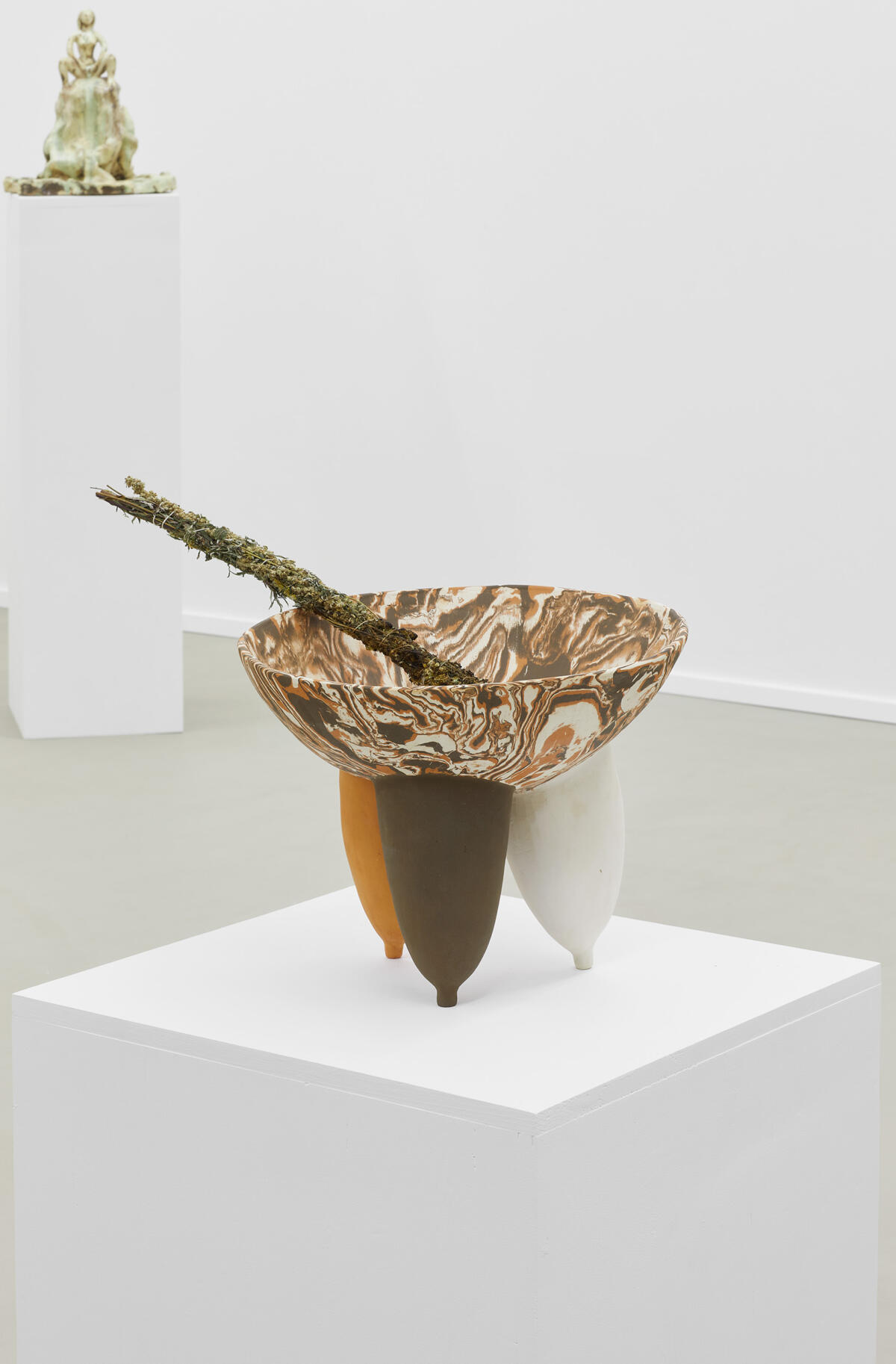