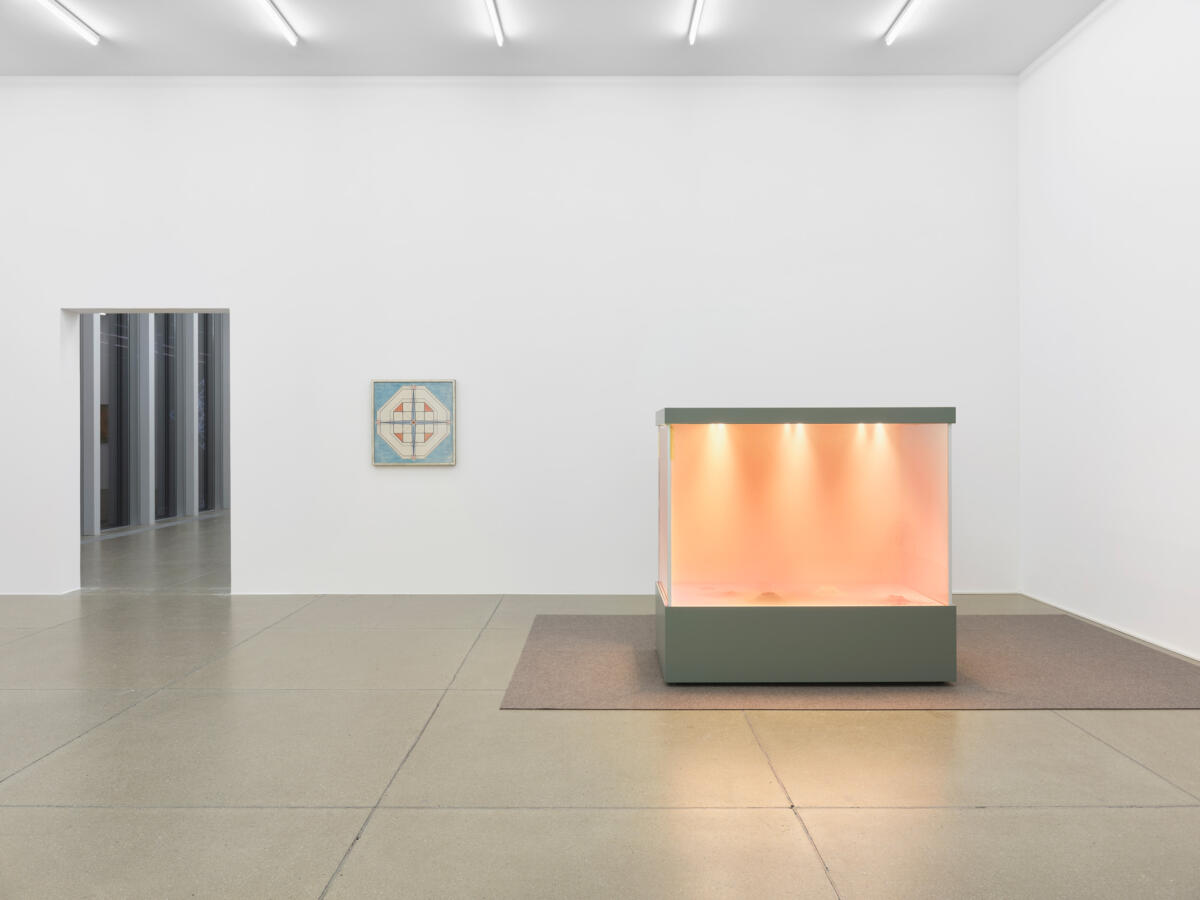 The fascination of Emma Kunz (1892 – 1963) has never been greater than it is today. At the same venue where her work was discovered in 1973, the oeuvre of the Aargau researcher, healer and artist is presented alongside contemporary artistic practises. The latter reflect on Kunz’ work or particular topics related to her field of activity.

Emma Kunz is once said to have predicted that a time would come when her paintings would be understood. In fact, much that she anticipated in her holistic thought and practice seems quite natural in today’s art. Living a secluded life far removed from the art scene, she exemplified an expanded concept of art, rejected the idea of art versus non-art and instead opened it up to a wide range of aspects – research, medicine, natural history and the supernatural, the magical, the visionary. Kunz based her drawings on questions that she drew on graph paper with the use of a pendulum. On the principle of repetition and appropriation, she also reused finished drawings and re-explored them. The exhibition includes around sixty of these drawings, many of which are being shown for the first time. The dialogue with recently produced works by fourteen contemporary artists displays new and unfamiliar angles of an oeuvre that is highly contemporary in a time where traditional categories need to be critically questioned. 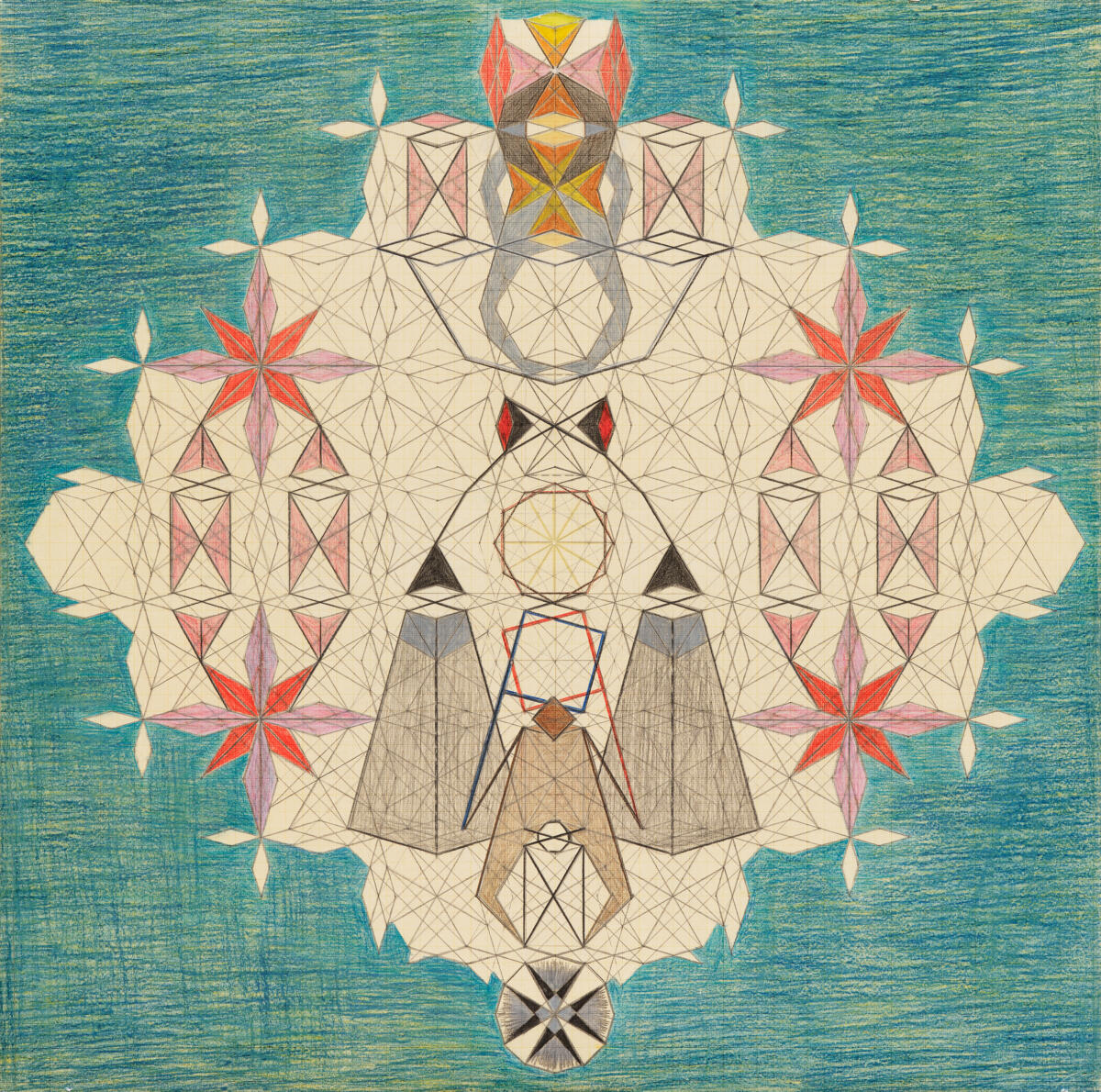 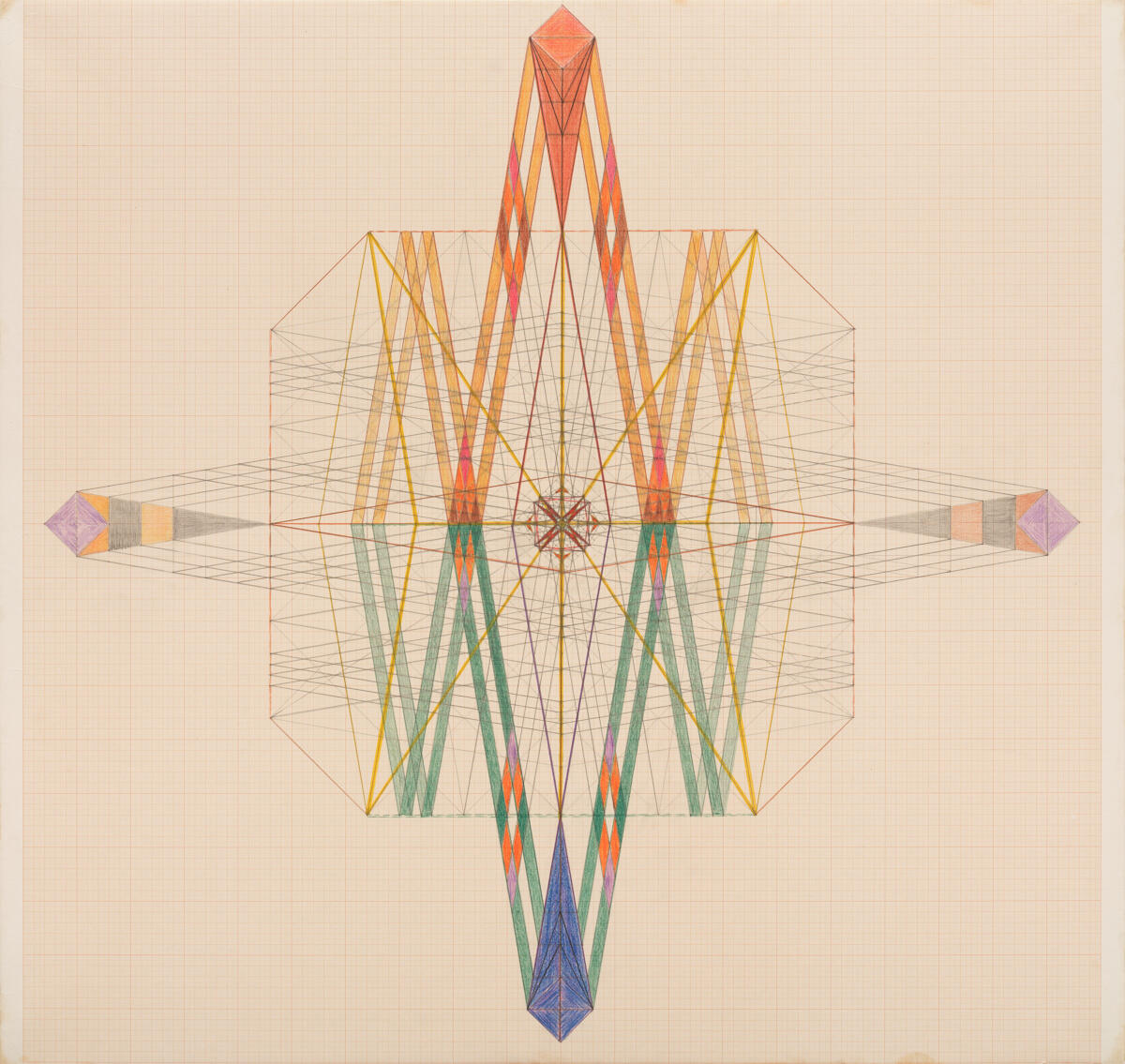 Meret Kaufmann: At Aargauer Kunsthaus, you show Origin II (Burning of the Houses): a custom environmental dust chamber that reacts to external impulses. Can you describe how you first developed this work for a show at Kunsthalle Basel in 2019, and how it features in Aarau alongside Emma Kunz’s work?

Dora Budor: The works of the Origin… series came about through a long process of research for the show I am Gong, for which I developed a system that used the live soundscape of the concert hall expansion taking place across the street. This soundscape was sourced as a score for the exhibition, as all or most of the works and environments in the show were constituted to be governed and evolve by this unruly composition. My interest was to latch onto a real process, to parasite on its excess, so that the unintentional byproducts of labor and progress are then again recycled into the life of an exhibition. In other places where Origin II (Burning of the Houses) is shown, the work is composed from the reactions to the specific context and the outside conditions—in one way bringing the actual consequences of the developing landscape into the institution, but also blurring its specifics, as the multiplicity of human and nonhuman agencies makes it impossible to know whether the sonic spikes happen due to drilling into the asphalt, quarrels of the workers, or rain striking the construction tarp. Sound is, in essence, a form of pressure: it is a stirring of the molecular figuration of air, a force of oscillation that travels through a given medium, and also through bodies and buildings. So the work performs via extraperceptory senses, which is in some way similar to the expression of Emma Kunz’s pendant drawings. Conditions that we cannot see or sense visibly affect its state.

Emma Kunz understood herself less as an artist-author but rather as the medium of her image work, as channeling energies and giving shape to universal laws that underlie them. To this end, she had a technique involving graph paper, a ruler, pencils, a question, and a pendulum at hand. Your work, too, sets up a system which plugs the human into other, mostly machinic, energies; thus, it develops a dynamic of its own and challenges traditional notions of the artist as author. How do you understand your role(s) in making work? And what is at stake in challenging authorship in generating images or artworks today?

One of the main concerns of my work is how to destabilize and explode the boundaries of “being an object”—in other words, how to expand an idea of the artwork from a solid and finalized thing into a protean and evolving network of interactions and relations. Both buildings that I worked with in Basel were originally built by the same architect at the end of the nineteenth century, so one of the main approaches in the Origin… series was the idea of challenging the idea of preservation. In order to preserve something, might it be necessary to let it mutate and evolve? If you think about the way that art is usually conserved and archived, it is exactly the opposite; the main telos is to preserve things as they are—in a finalized, complete form. My intention is to redistribute some of the control, to allow the artwork to act differently according to changes in its environment and its time. I often think of the Origin… works as unstable “image- forms,” which are images created only to exist in a moment before they deconstruct and change into something else, an opposite tendency to the static and preserved work kept in museum collections… J. M. W. Turner’s work, which I used as reference, stems from his initial proclivity to include the weather, chance, and even the possi- bility for things to be destroyed. Some of Turner’s paintings were stacked in his studio under the gaping hole of a broken skylight, through which the rain and smog would enter and “finish” them, before he would go back, paint over, and let them soak again… 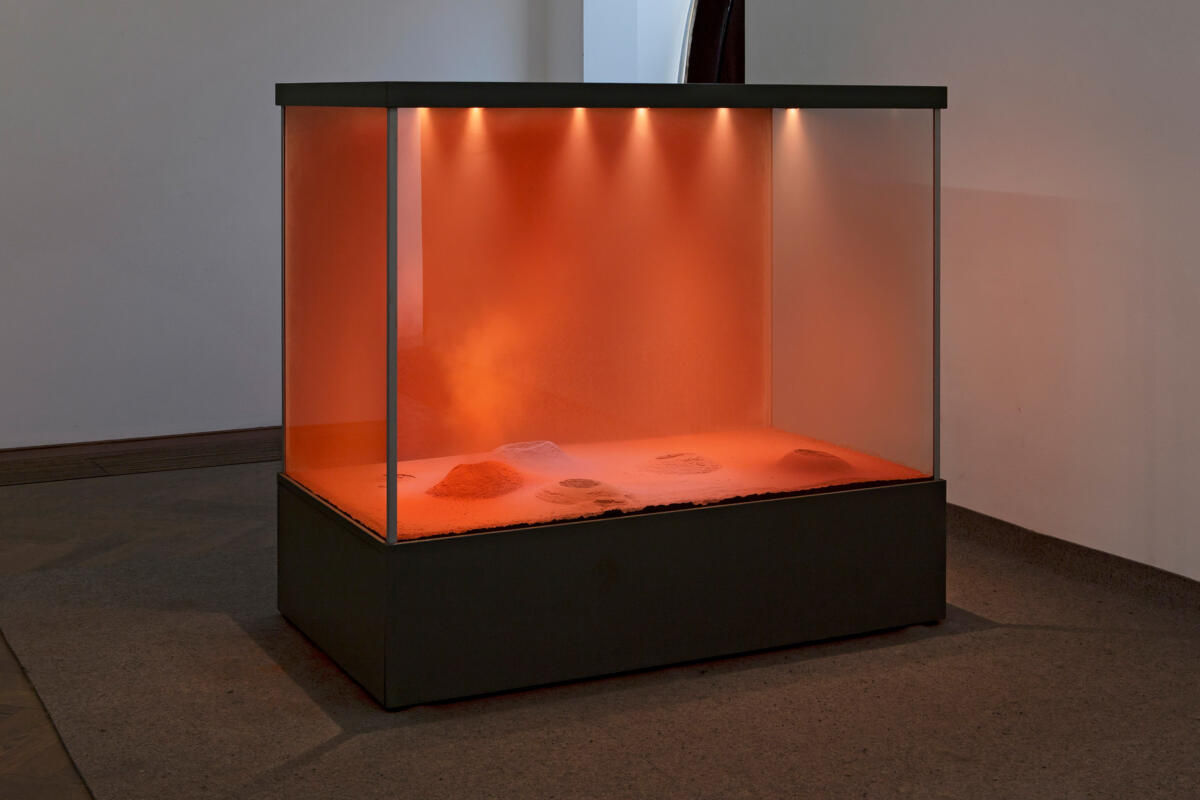 “My works are made for the twenty- first century,” Emma Kunz allegedly said—a quote that invites reflections on history, if not more speculation about the present and future. Origin II (Burning of the Houses) also casts a wide and tangled web in time, simultaneously invoking ancient and extraterrestrial landscapes, polluted bodies, and life yet becoming. How important is a historical situatedness as well as its willful confusion in your work?

The moment I am writing this, the sky of the San Francisco Bay Area has been transformed into an intense orange- yellow, and people report that ashes are falling from the sky as the effect of the ravaging wildfires. The atmospheric effects of the ash particles and smoke tint the sky with same “unnatural” colors as the ones that were pictured for the first time in three paintings by Turner a century and a half ago. My way of working sources transversal connections, and the way things have contingency through history and into the future, in order to be able to take a step back and realize a larger picture of life.

Dora Budor (b.1984 in Zagreb, lives and works in New York City) completed degrees at the Architecture University in Zagreb before moving to New York for an MFA at Columbia University. Since then Budor has been creating works at the intersection of architecture and art: installations, sculptures, and environments suffused with narratives and atmospheres simultaneously informed by cinema, science fiction, and scientific research. Budor’s works take on the guise of machines reflecting the pervasive hybridization of nature, humankind, and technology, while oscillating between the dys- and utopic. The artist often plugs into forgotten histories and infrastructural conditions to uncover dominant structures of power over human and nonhuman life in turn—as, for example, in the exhibition I am Gong (2019), where sonic frequencies from diverse activities involved intentionally or accidentally in the construction of a building were used as a score for the exhibition inside Kunsthalle Basel.

Meret Kaufmann (b. 1989, lives and works in Zurich and London), studied art history and theater studies at the Freie Universität Berlin and University College London (UCL). She is currently researching Rosemarie Trockel and psychoanalysis for her doctoral thesis and works as a lecturer, author, and cultural producer for the Zurich University of the Arts, the Emma Kunz Center, and the Centre for the Study of Contemporary Art (UCL), among others.

This interview was originally published in a catalogue accompanying the exhibition Emma Kunz Cosmos. A Visionary in Dialogue with Contemporary Art (January 23–May 24, 2021) at Aargauer Kunsthaus, Aarau. The show, curated by Yasmin Afschar, presents the work of Emma Kunz (1892 – 1963), a Swiss researcher, healer and artist, alongside contemporary artistic practises. The catalogue, edited by Yasmin Afschar and published by Aargauer Kunsthaus and Verlag Scheidegger & Spiess is avaliable for purchase at: https://shop.aargauerkunsthaus.ch/?op=product&id=7025.

The team at BLOK would like to cordially thank the authors: Dora Budor and Meret Kaufmann as well as Christina Omlin, media & communications officer at Aargauer Kunsthaus for their help and permission to publish the interview in our magazine. 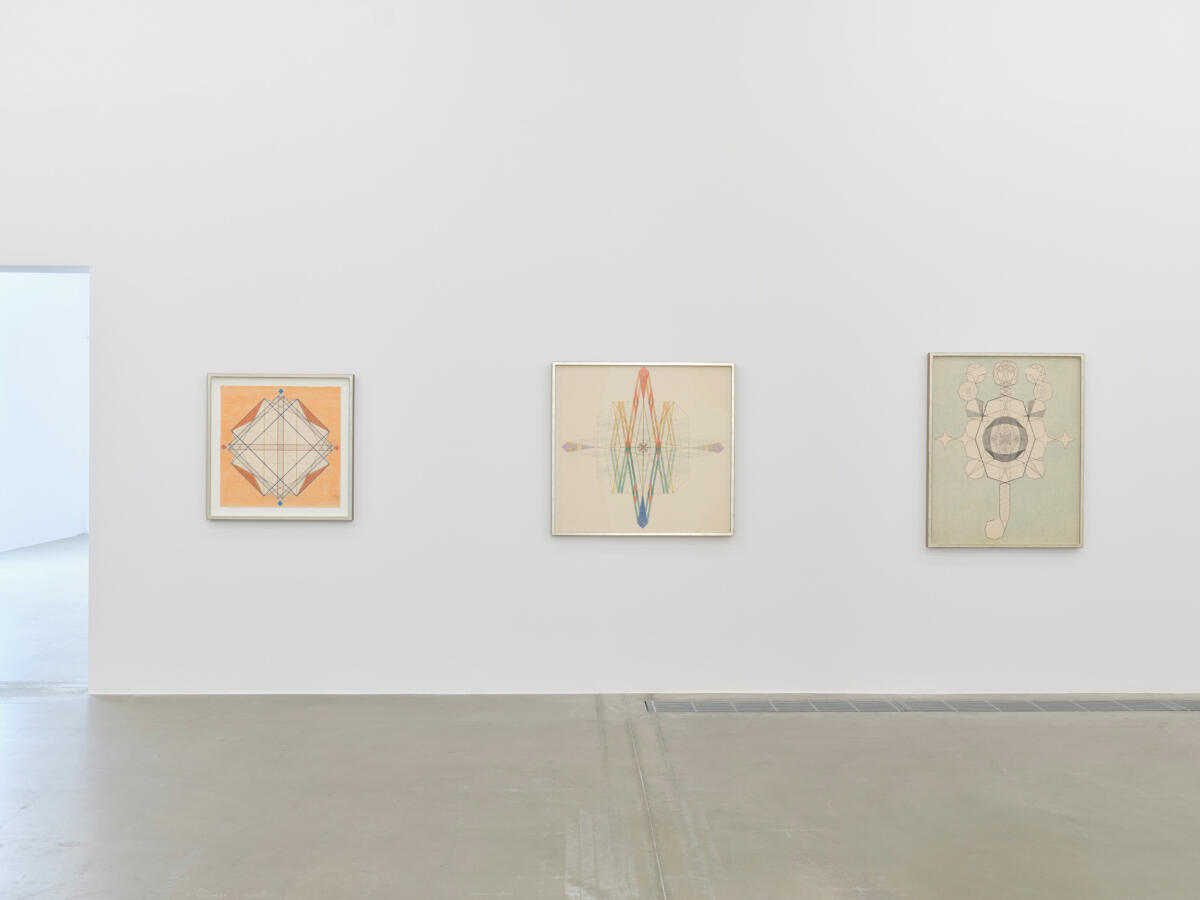 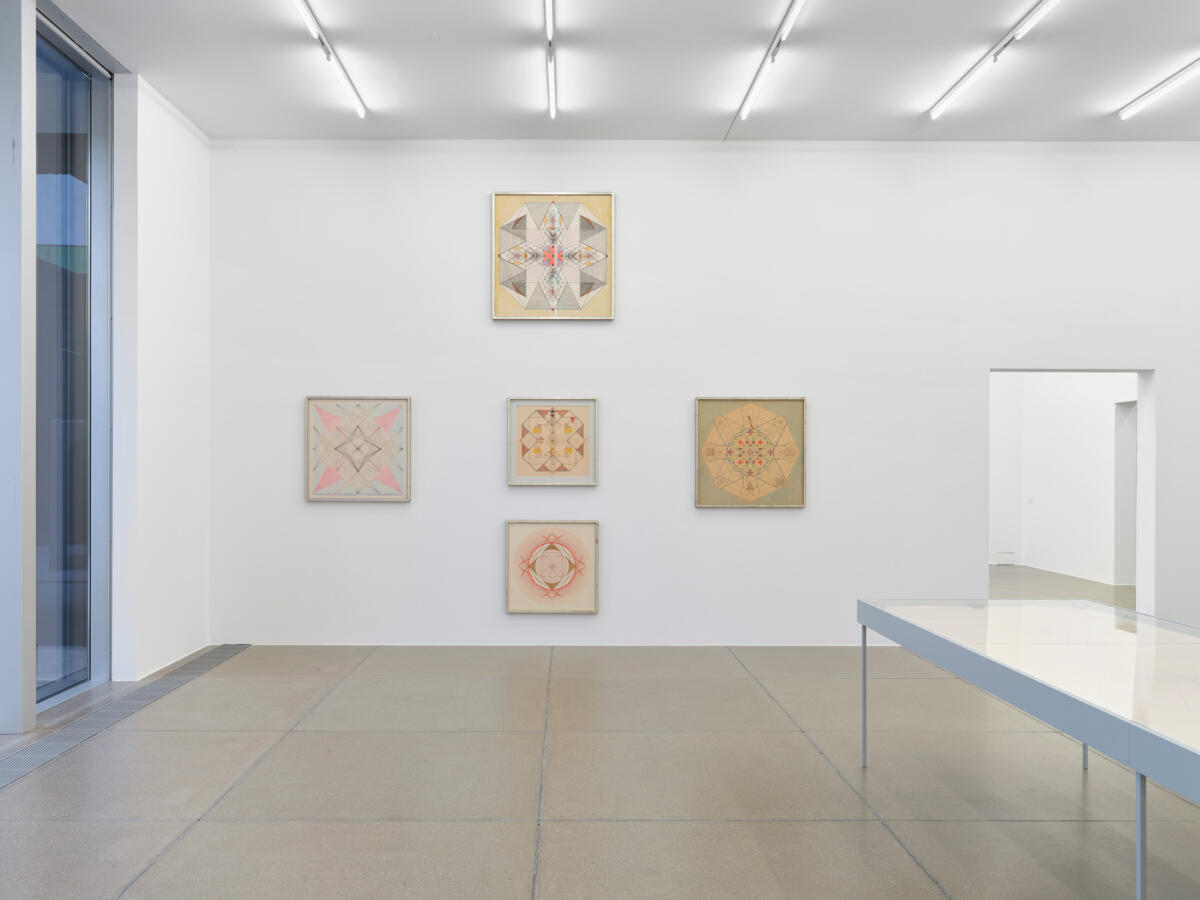 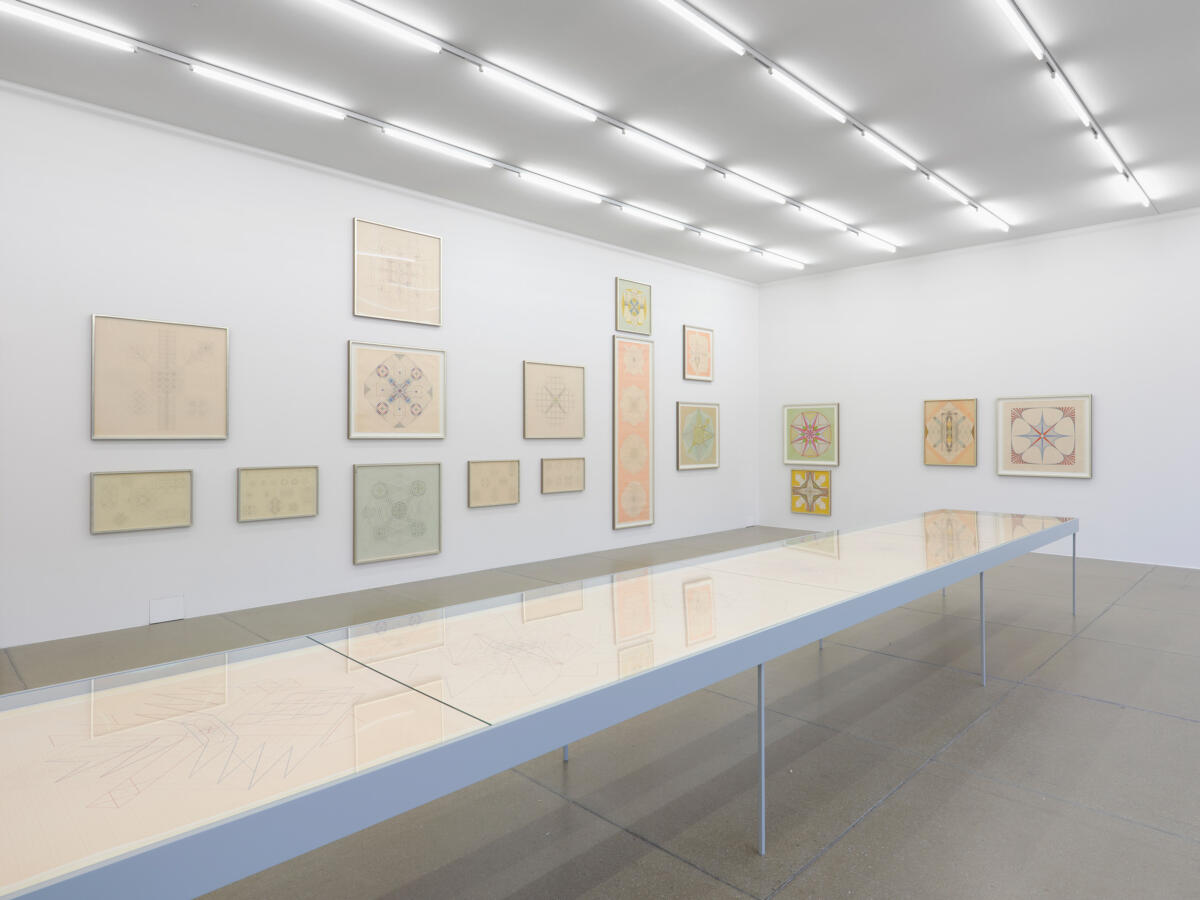 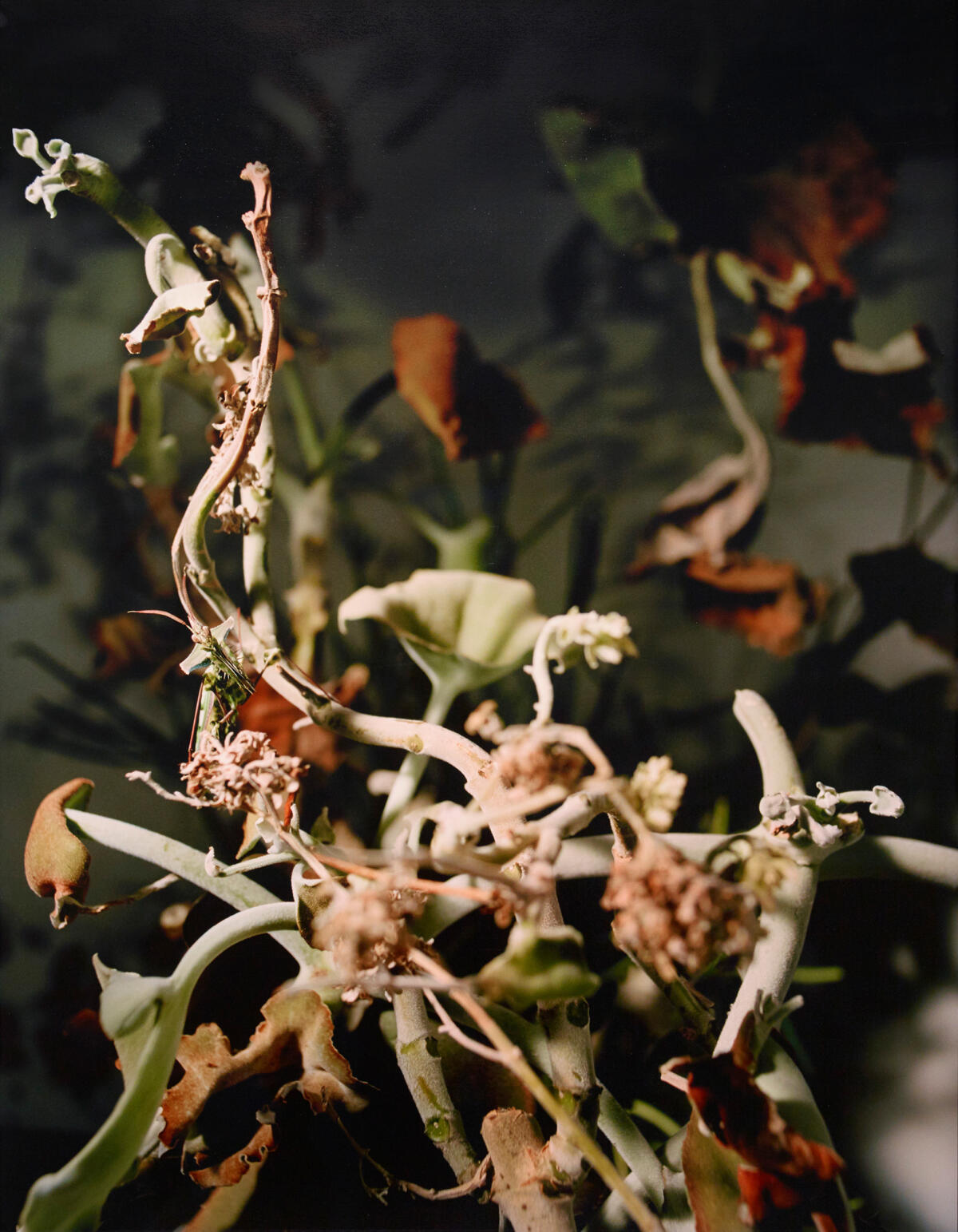 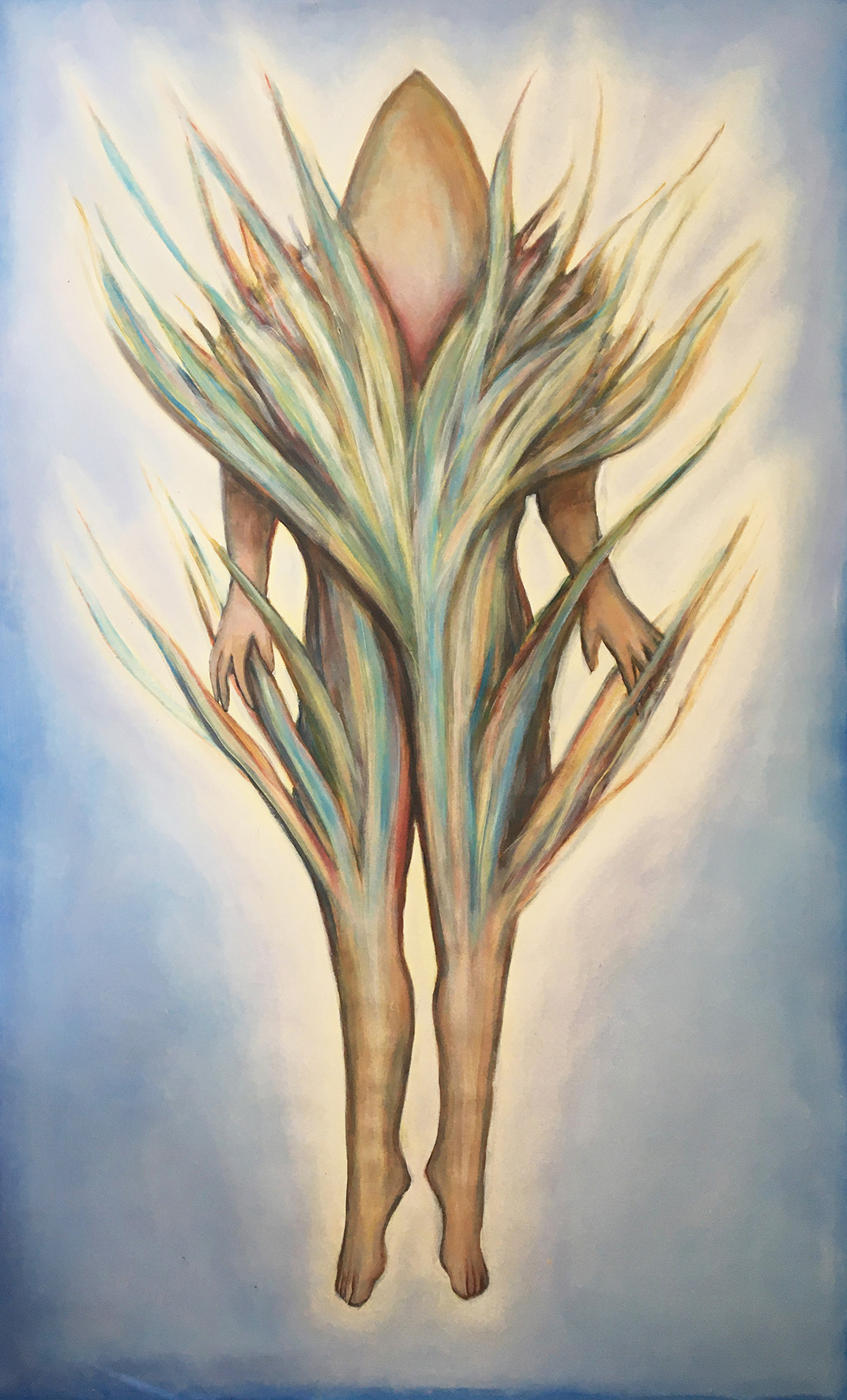 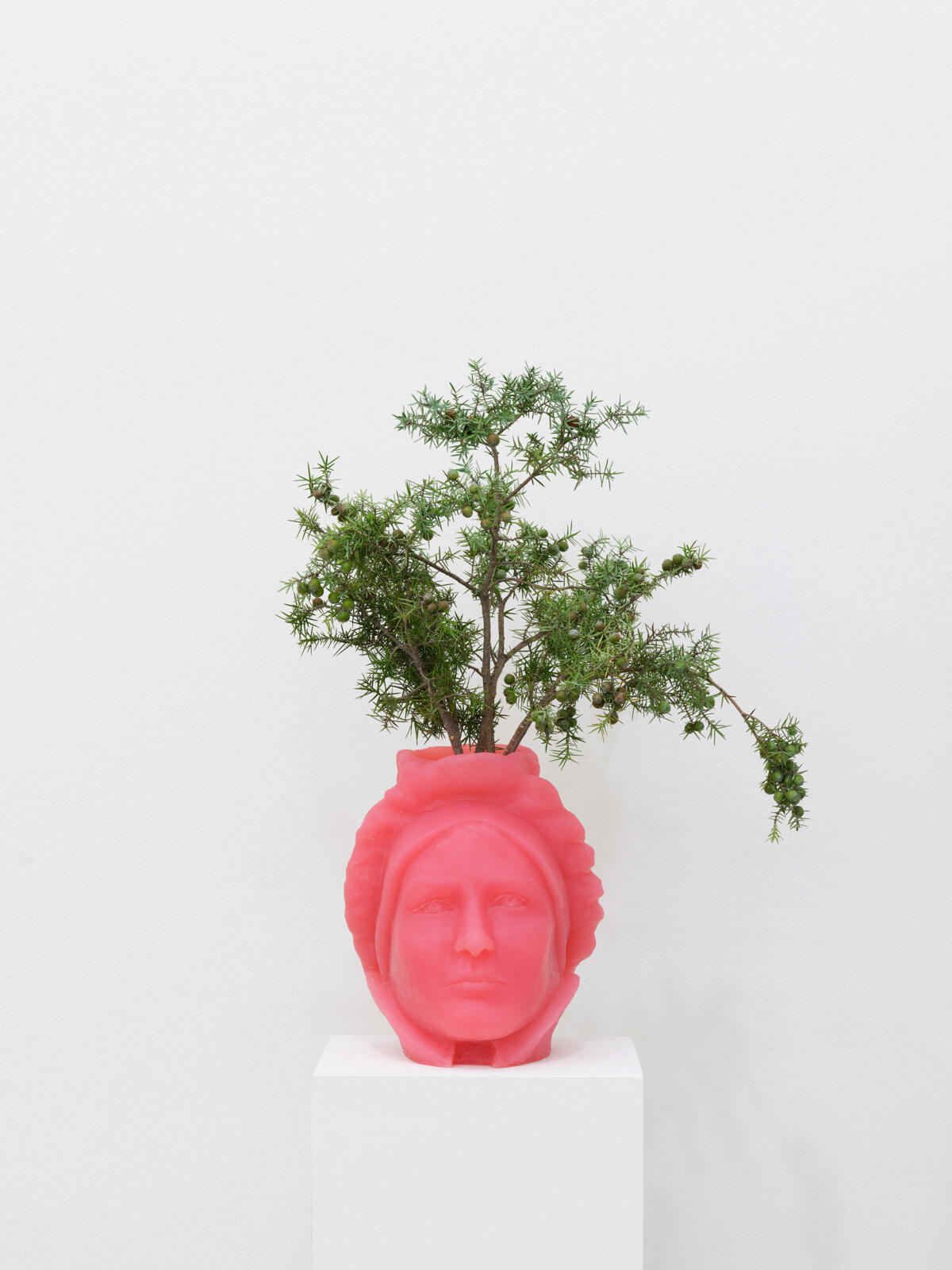 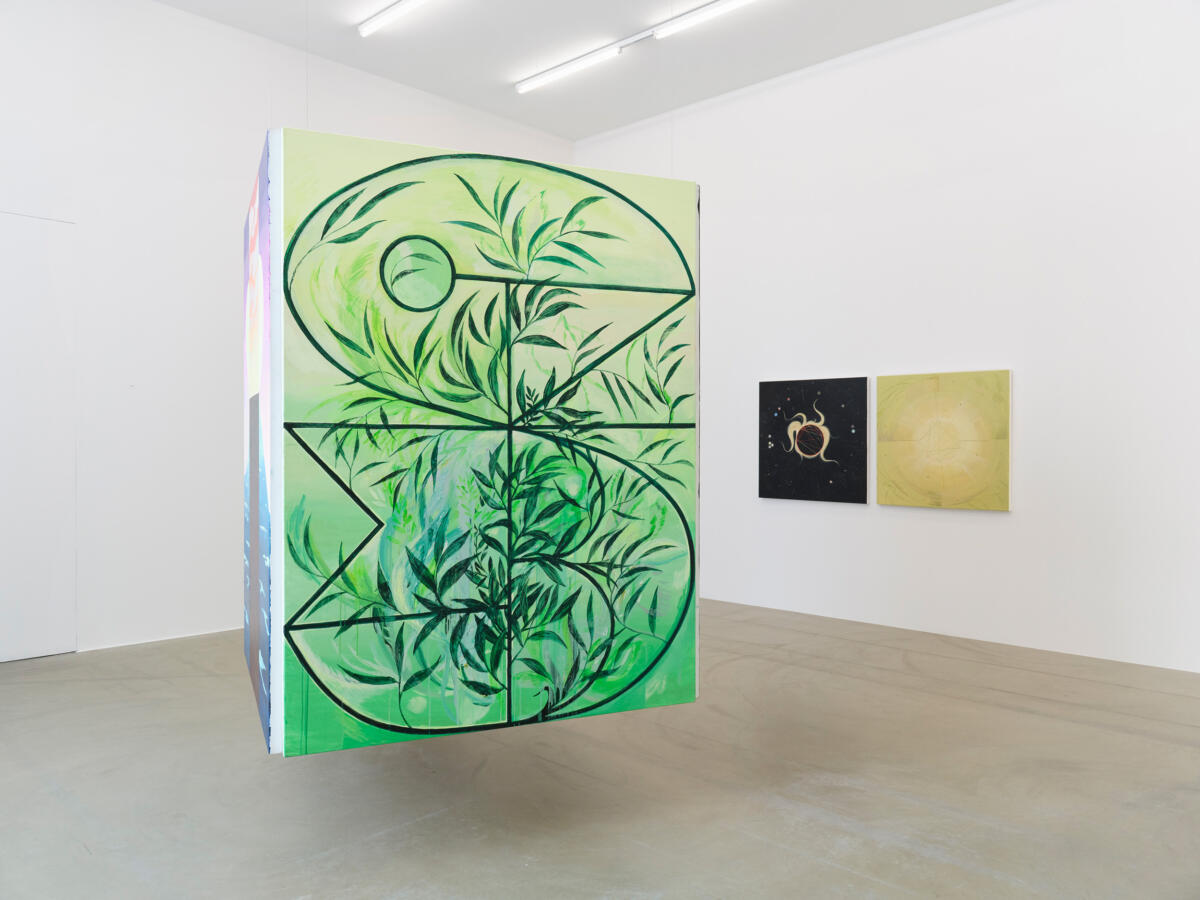 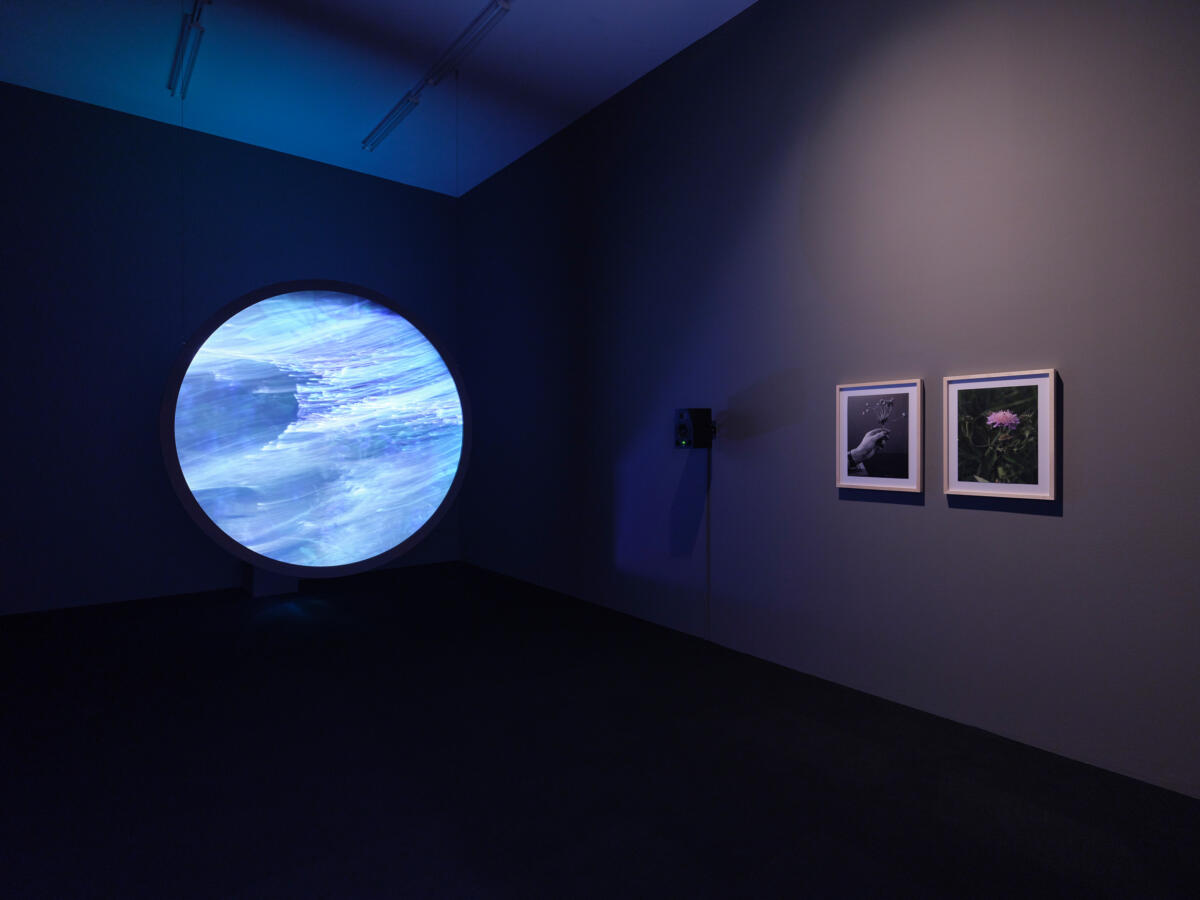 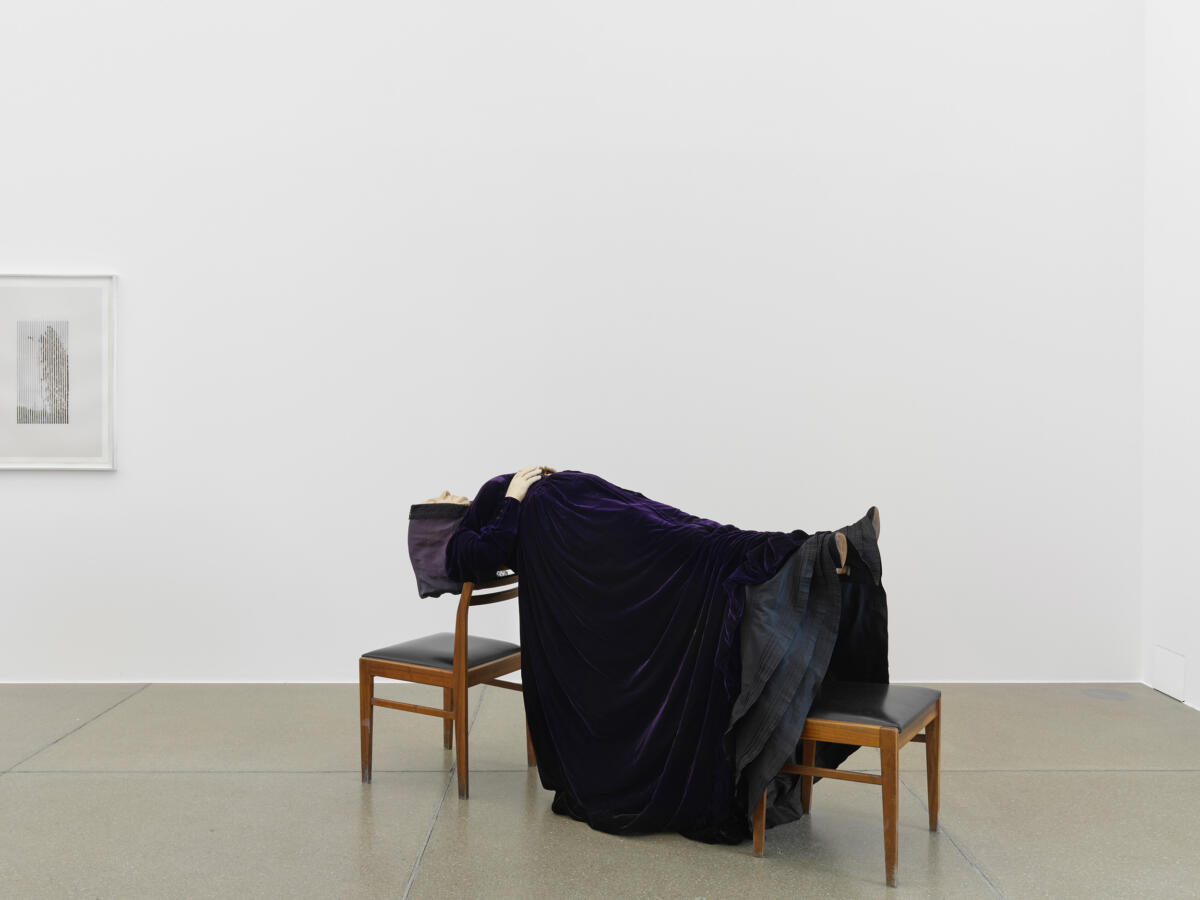 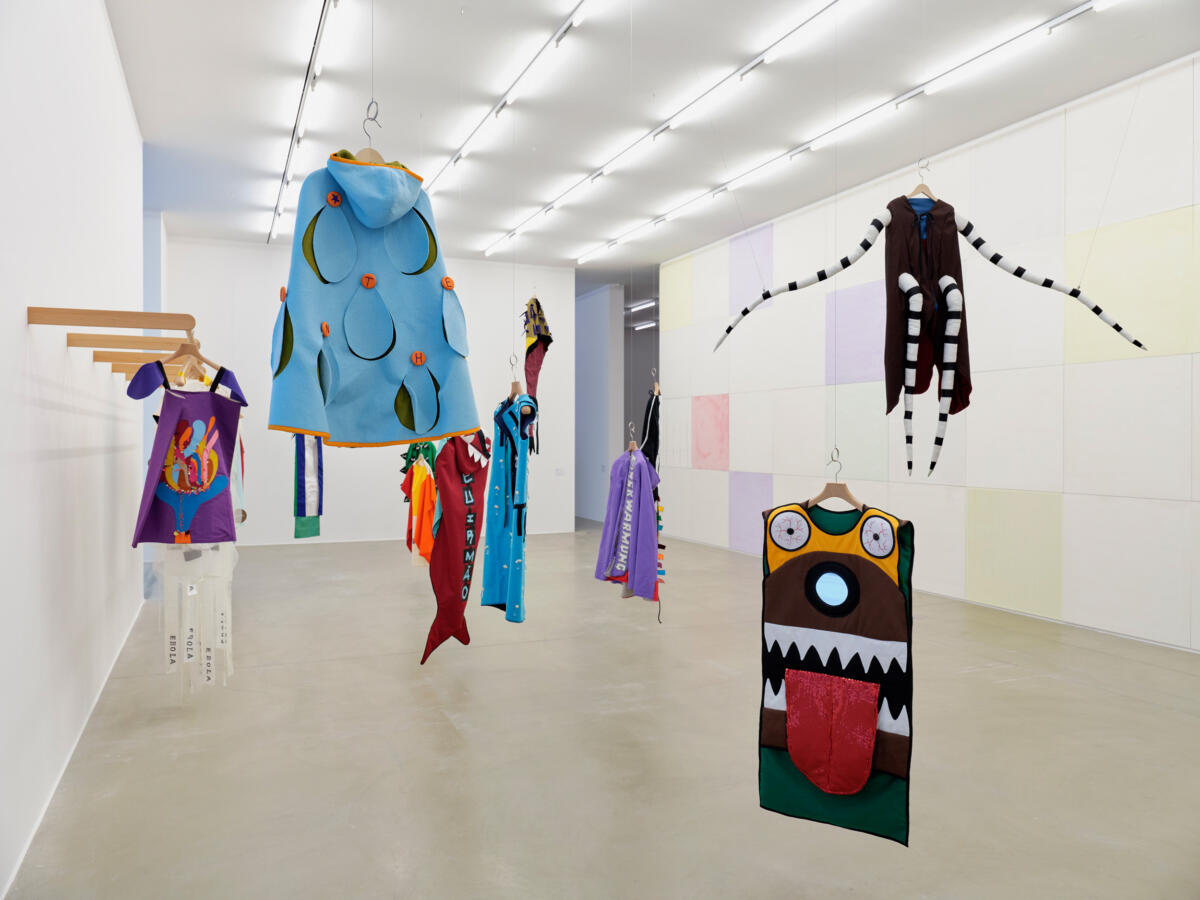 Rivane Neuenschwander, 'The Name of Fear', 2013–2020, exhibition view at Aargauer Kunsthaus, photo courtesy of the gallery 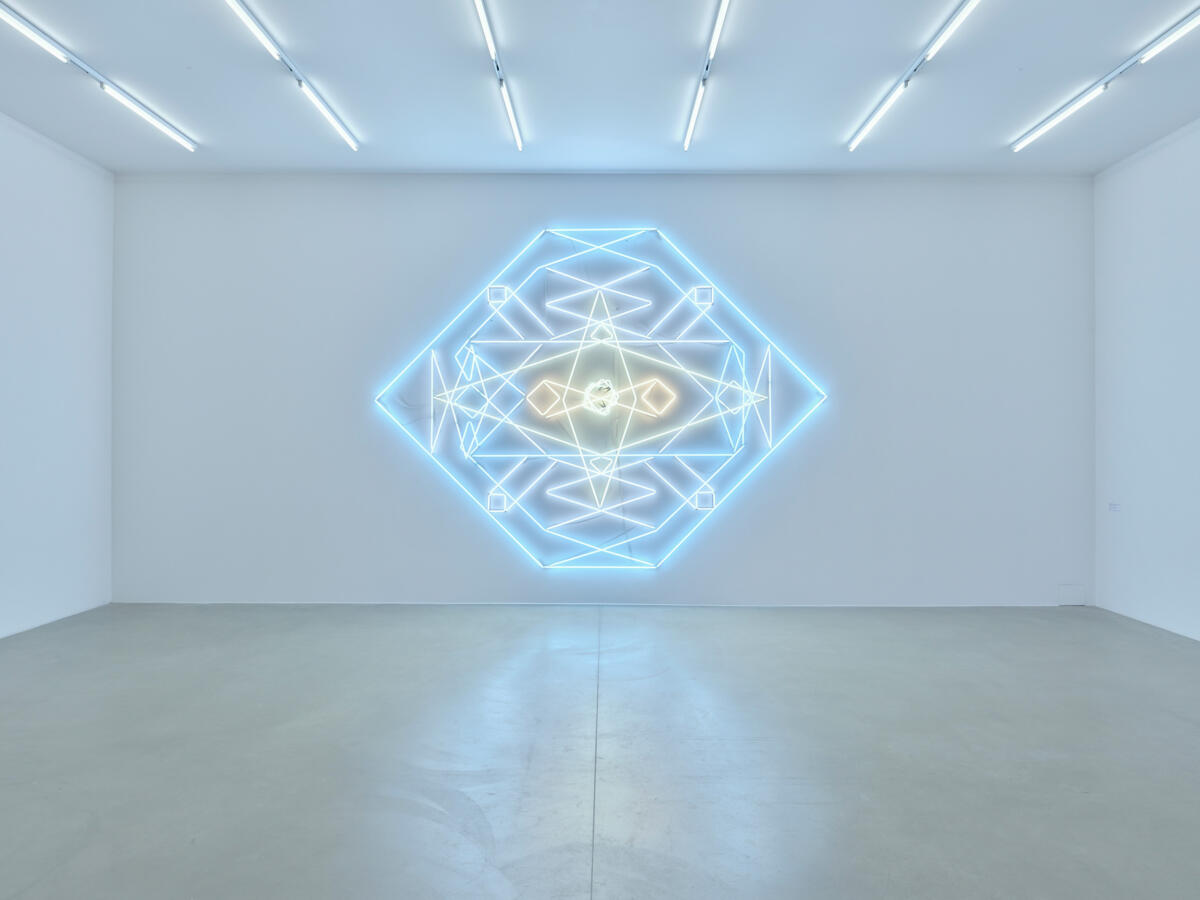 Mai-Thu Perret, 'Untitled (after no. 067)', 2020, exhibition view at Aargauer Kunsthaus, photo courtesy of the gallery 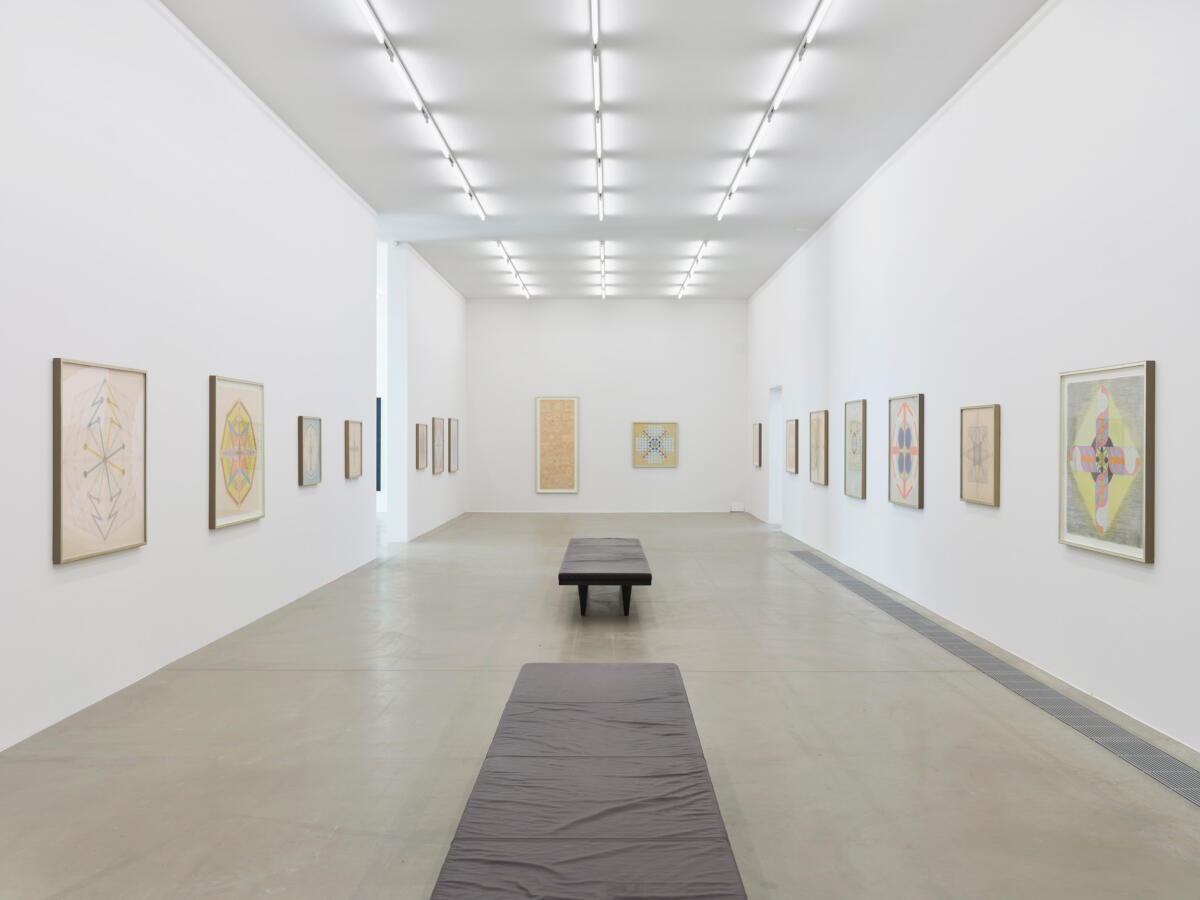 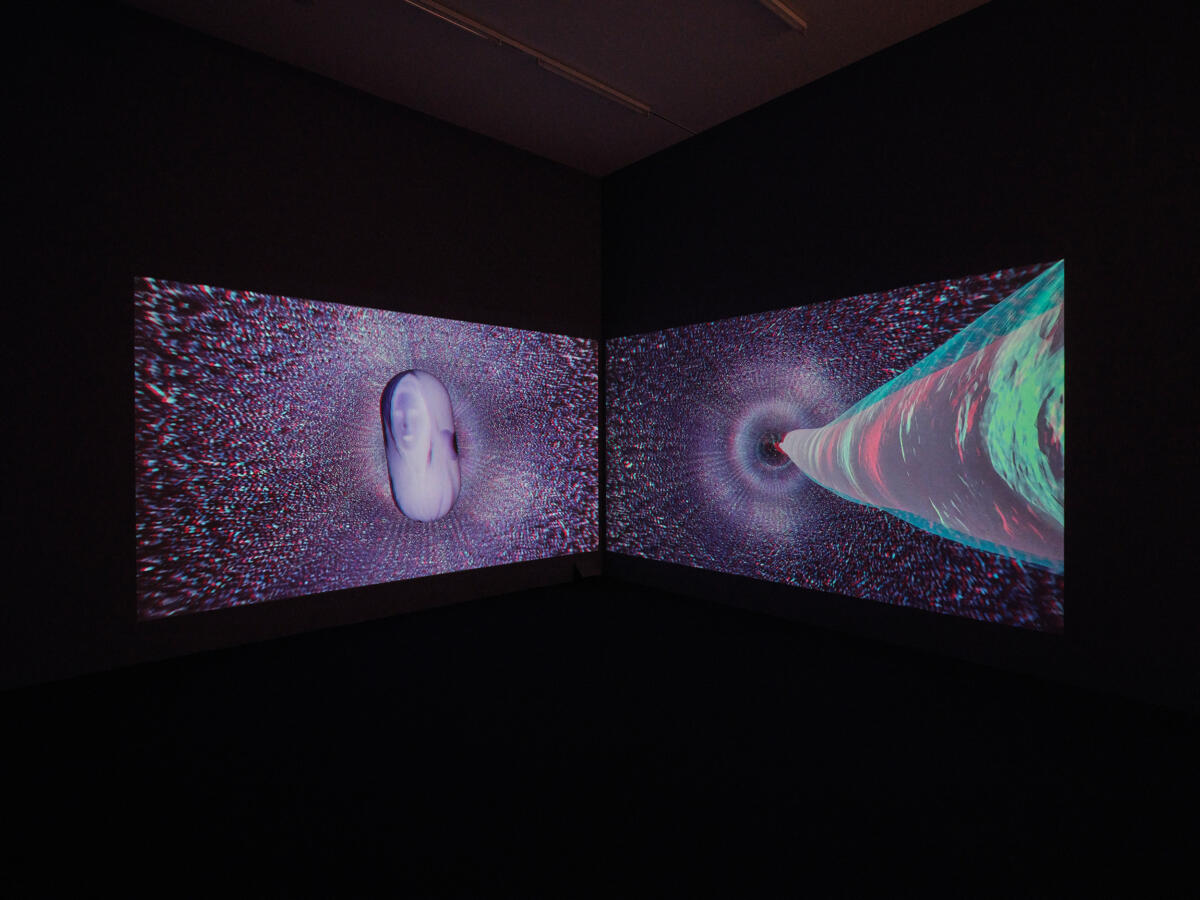 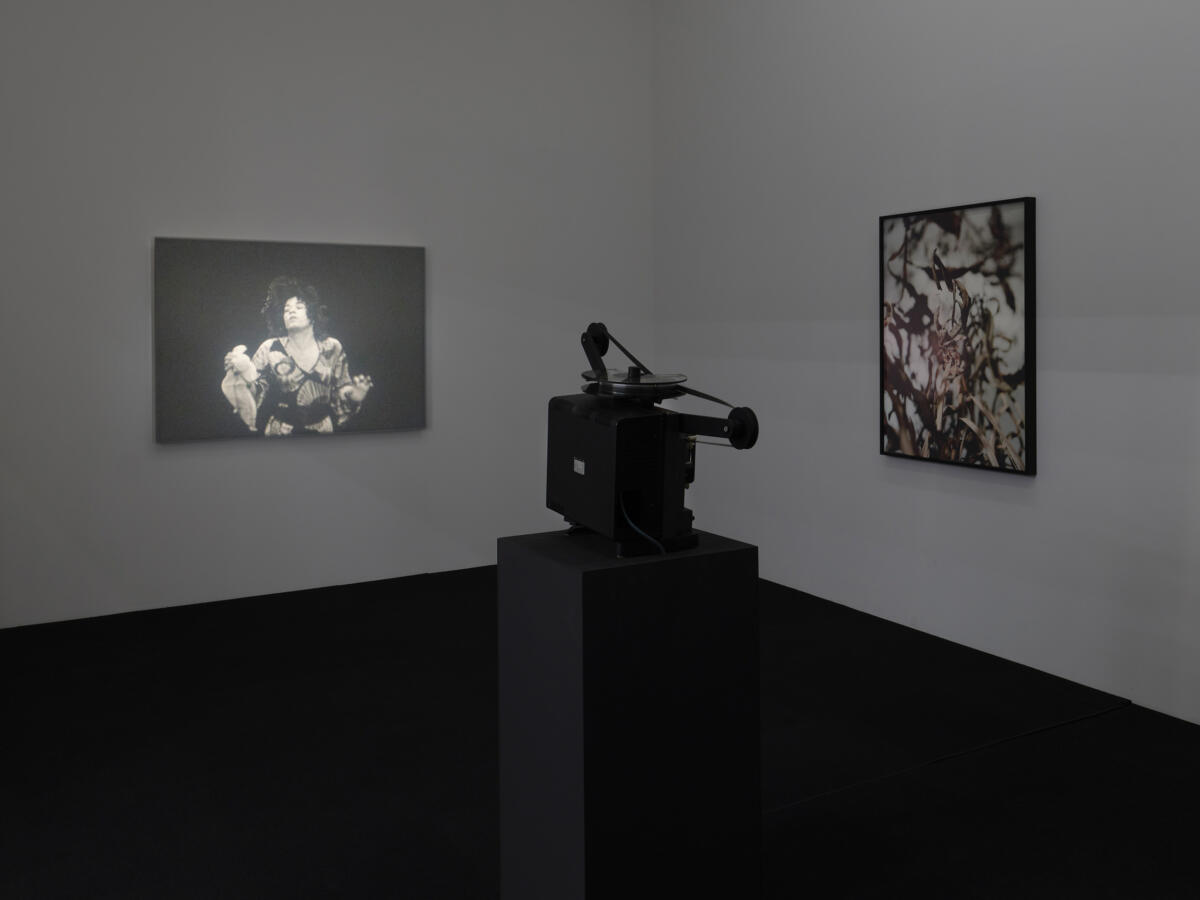 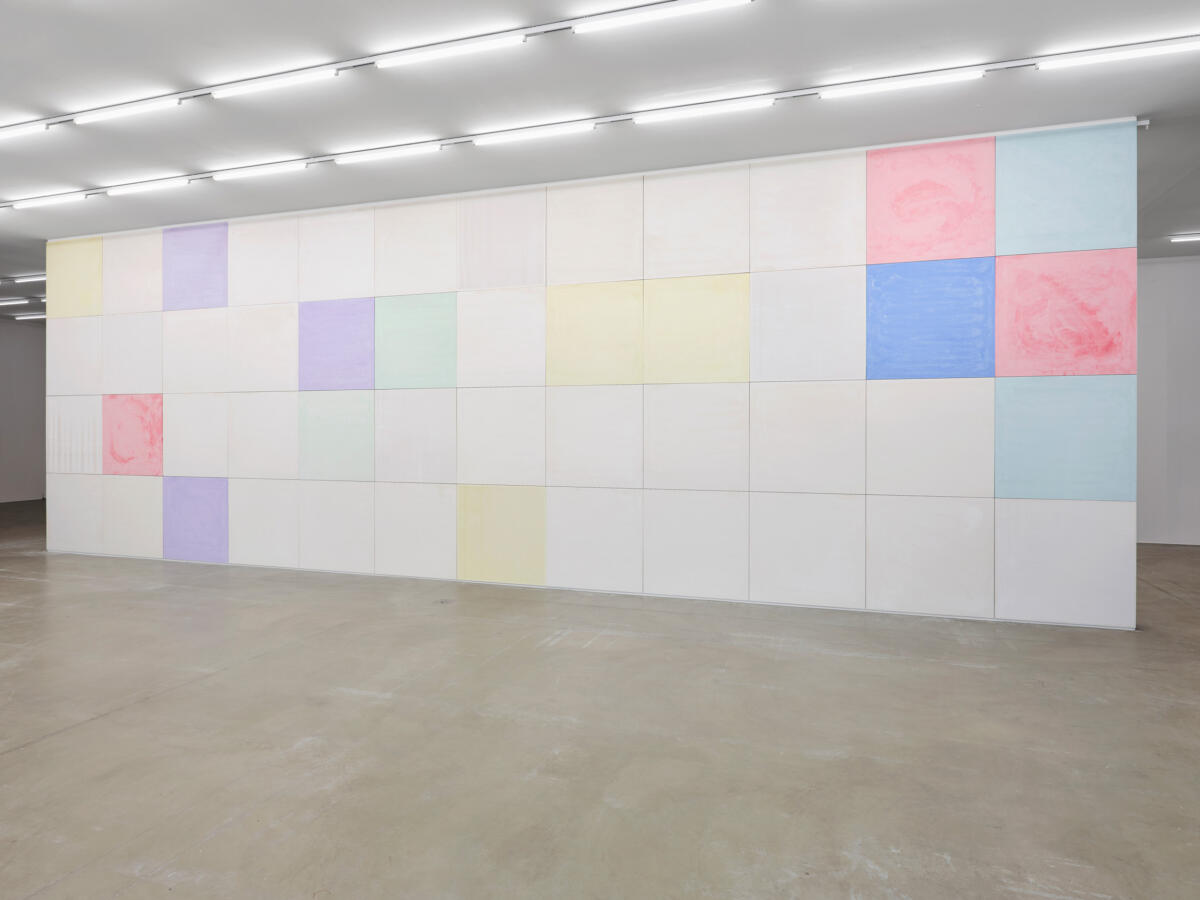 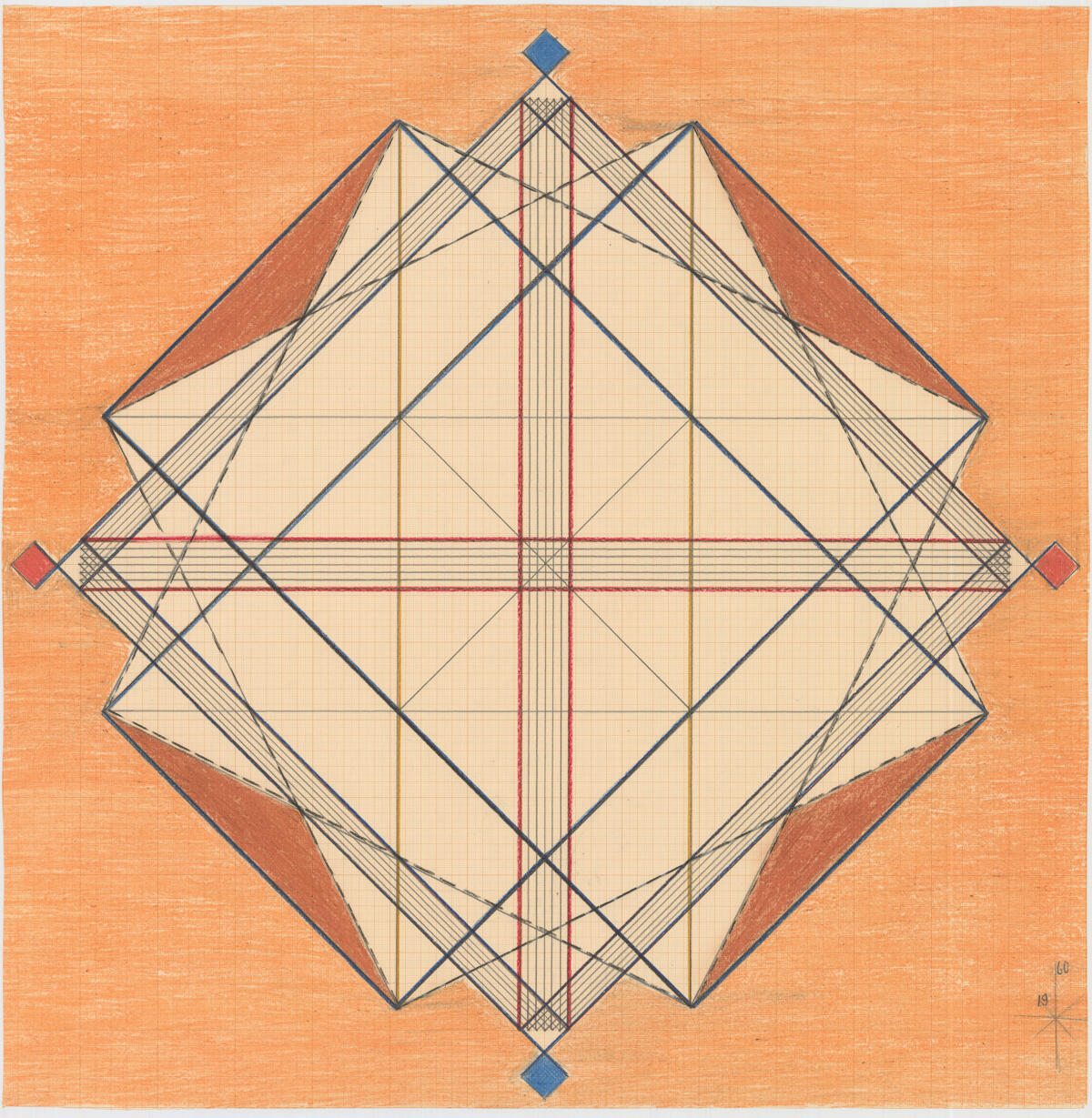 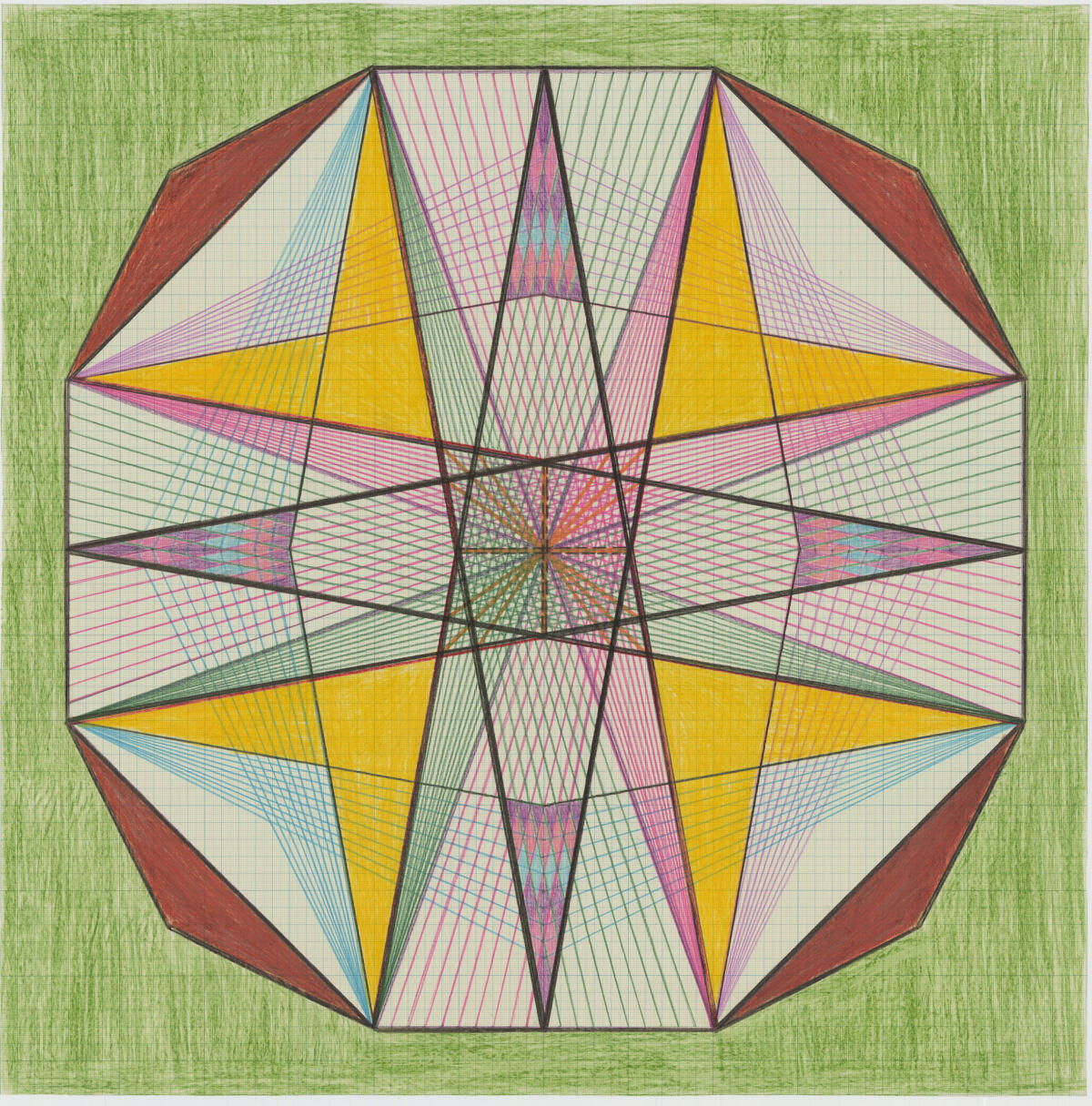 All the Petrol Stations You Will not Stop at. Around Barbara Gryka’s Performative Activity, ‘Motorcycle Dance’