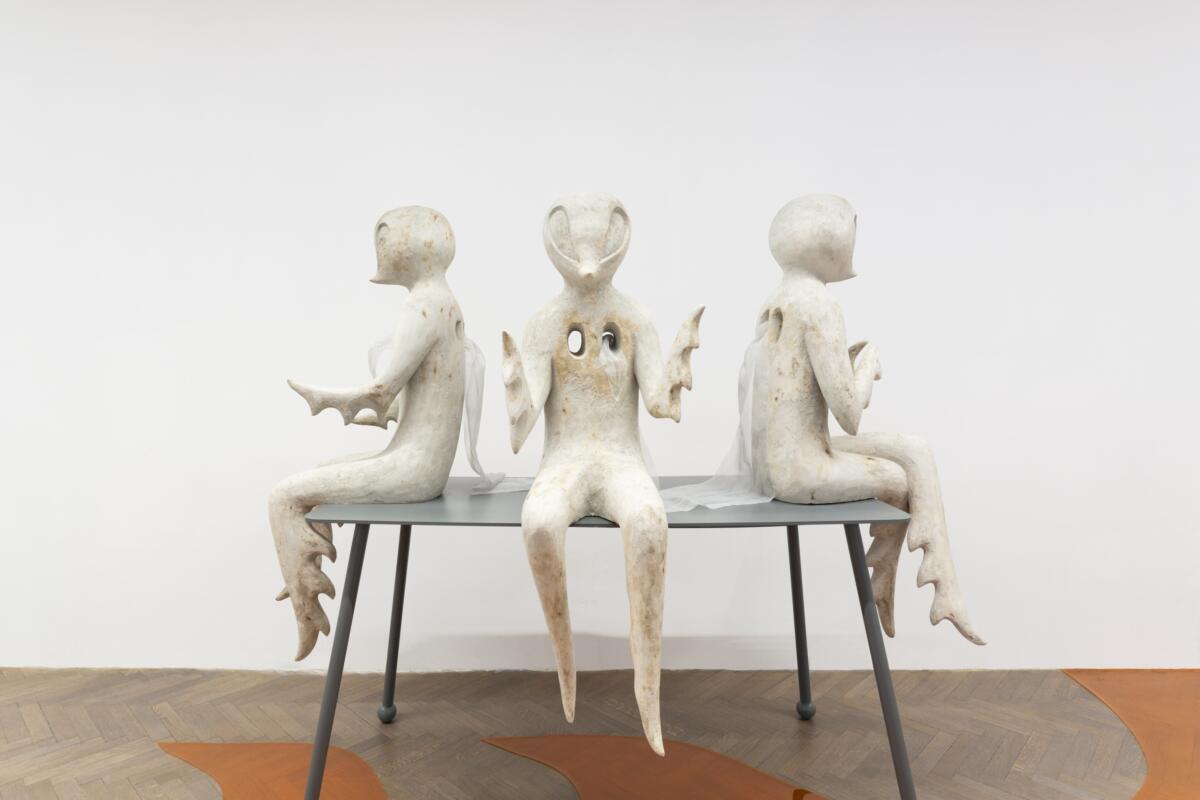 We are talking in relation to your current exhibition “Alienbees, save us please!”, which we are pleased to present at the Arsenal Gallery in Białystok until 10 January 2022. The publication of our conversation is also accompanied by photographs taken by Tytus Szabelski  in your studio, in the countryside near Prague where you’re currently based. So first I’d like to ask you about how important it is for your work,  that you grew up (and live again) in a rural area?

Actually, I don’t know how important it is for me that I grew up in a rural environment, but in any case there is something subconsciously rooted there. Otherwise, I don’t think I’d be inclined to move from the city to the country again. Rural areas are now sort of deserted islands of life in the midst of increasingly toxic monocultural, inhospitable farm fields or dying forests. When you live in this environment and observe the degradation of your surroundings, you cannot help but react.

What motivated you to address the historical topic of agricultural industrialization in Czechoslovakia?

When I lived in the city, I had more romantic ideas about the countryside. A kind of search for the mystique of abandoned places and customs. At the same time, I could still see my father, how passionate yet depressing it was for him to exist as a small farmer in the present day. In the countryside I also feel more intensely the contemporary problems of the region, and along with that I am also interested in the history of the problems of agriculture, which is closely linked to collectivisation and industrialisation. So I am motivated mainly by the stories of small farmers, such as my parents, who went through the past regime and collectivisation, and the related observation of the state of things around them. The topic of ecology and agriculture is becoming more and more important to me. And then I work with the search for historical connections and contemporary consequences. In doing so I connect thematic contrasts, like utopia and dystopia. The titles of the exhibition and one of the works presented are also connected with your childhood spent in the countryside in the 90s. Can you tell us where the idea for the “Alienbees” came from?

Bees are my favourite subject because pollinators are an indicator of the cleanliness of the environment. And it’s fantastic how bees are able to adapt to changing conditions – there is a unique evolutionary mechanism that works in them, for example in terms of body transformation in reaction to the parasite varroa mite. I imagine the toxic landscape then, as a strange inhospitable universe in which surviving animals have to mutate or transform to survive. Like aliens in their own alienated universe – the landscape. The insect world is also alien to us in many ways, and I enjoy the idea of mutant bees reminiscent of the aliens from the covers of mystery sci fi magazines in the ’90s, when it was believed in my neighborhood that they made crop circles. The ’90s are also very interesting in this regard in terms of society’s perception of the climate of eco-collapse and agro-history itself. It’s as if those emerging crop circles and the idea of alien-conspiracy obscures the nature of the planet’s already escalating problems. And instead we have turned into a kind of ezoteric sci fi world of beings who have influence over us and will either destroy us or save us. For the exhibition at Arsenal, I had a subtitle in reserve, “When alien-conspiration gave birth to a mutant of agro-degradation”. But I used the shorter “Alienbees, save us, please!”

Why are you asking them to save us?

It sounds like a fanatical prayer to aliens who could save the planet for us, because we don’t believe we are capable of doing anything about it. It’s just that we’ve woken up from the hangover of the ’90s to a much harsher reality, and in retrospect the circles in the monocultural grain fields seem rather ridiculous. And the current dystopian mood is really spot on. However, if I incorporate real earth bees into the prayer – perceived as aliens, then the prayer would not have to sound so insignificant and it already makes sense to me.

How long have you been working with the insect theme? Do they have a special meaning for you?

Insects are fascinating creatures. Many environmental paradoxes are observed especially through  insects – for example, for a bee, the city is currently a cleaner environment than the countryside, which is surrounded by fields treated with pesticides. Beekeepers who have apiaries on the roofs of townhouses in urban areas observe that, unlike in rural areas, the chemical composition of honey from the city is better.

There is also an interesting history and symbolism of bees in different cultures. In the past, I worked with bees by placing figural sculptures on top of active hives. A part of the bee colony, without the queen, peacefully (and temporarily) expanded from the original hive into a cavity in the body of the statue, where it created a new comb and lived throughout the season. This process is symbolic and is inspired by Greek legends. Honeycombs built by bees inside the statue replace the entrails, important organs that can symbolize the soul, as the original systematic structure inside the body of the statue. The ancient Greeks believed that the bee was a symbol of the eternity of the soul, immortality and non-sexuality because, before domestication, bees often lived in the cavities of dead bodies. Likewise, other ancient cultures associated bees with the immortality of the spirit. The bees that emerged from the cavities of the dead bodies were seen as ghosts rising back from the kingdom of the dead. Could you also say something more about the works in which your sculptures become utilitarian, taking the form of beehives?

Beehives could again be perceived as art objects – sculptures, the purpose of which is not only to beautify the landscape, but also because the hives are beautiful for their usefulness and ecological function. Following last year, and in the current state of the climate crisis, I have perceived an overall social desire to move from the interior to the exterior, and to breathe cleaner air. The creation of beehives does not have to be perceived solely as a revitalization of folklore or countryside aesthetics – I do believe that the creation of sculptures as beehives has untapped potential, especially with regard to contemporary artistic approaches. We should also see a big challenge in that. The potential is also witnessed in the current revitalization of land art; eco-poetic sculptural realizations in fields, meadows, or parks.

In your artistic bio it is rarely mentioned that before you decided to pursue a career in art you also studied conservation. Don’t you think that these studies have significantly influenced your artistic practice?

Yes, I think it has certainly influenced me a lot not only in the craft, but also in how I perceive historical themes and symbols more as puzzles that help me add to the context of today. Why do some things and mistakes keep repeating themselves, where is the origin of the current state of civilization? Of course, history is also being rewritten, but symbolic references in art are still the greatest rope that allows us to trace the essence of human deeds and events. Suddenly you feel as if the past is a possible present and vice versa…

What historical artistic references are most important to you in the works? Could you say something more about your artistic inspirations?

I like the aesthetics of Soviet Brutalism, it is very symbolic for me not only because of the material of concrete. Likewise, the topic of the already mentioned “collectivization”, which is only part of the more complex concept of industrialization. Historically, the link between brutalism and collectivisation works primarily through the seizure of the landscape. There are many industries that suffer from this, from beekeeping to land degradation. Equally, I like to work with the morphology of Futurism and Czech Civilism, which was a celebration of the emerging industrialism, with Otto Guttfreund, for example, creating man and machine as one. I enjoy transforming this celebration of optimistic, even utopian visions of the future into a contemporary dystopian reality. 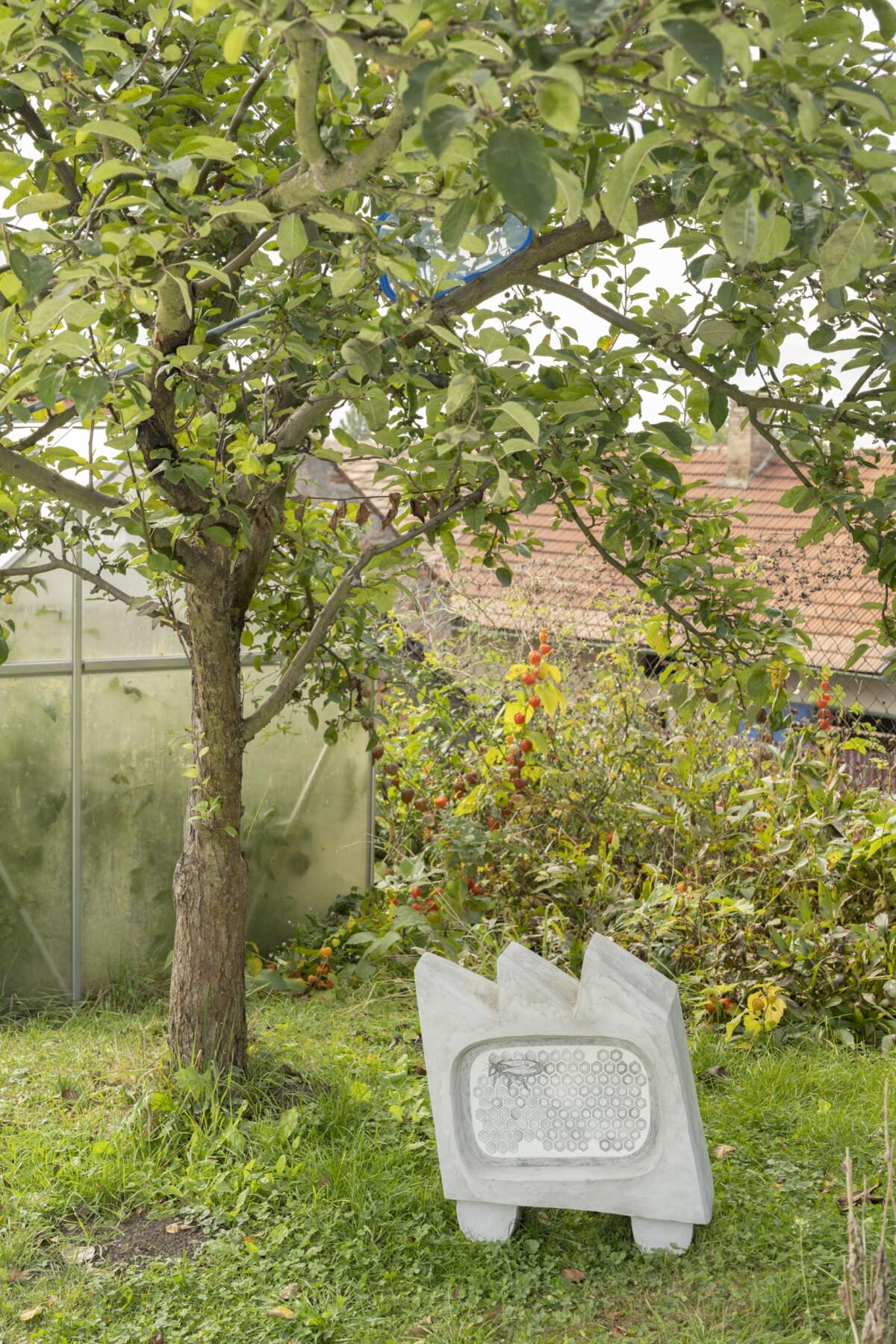 Anna Hulačová, We Are in This Together, 2018, concrete; pencil, paint on metal sheet. Courtesy of the artist and hunt kastner, Prague. Photo Tytus Szabelski. 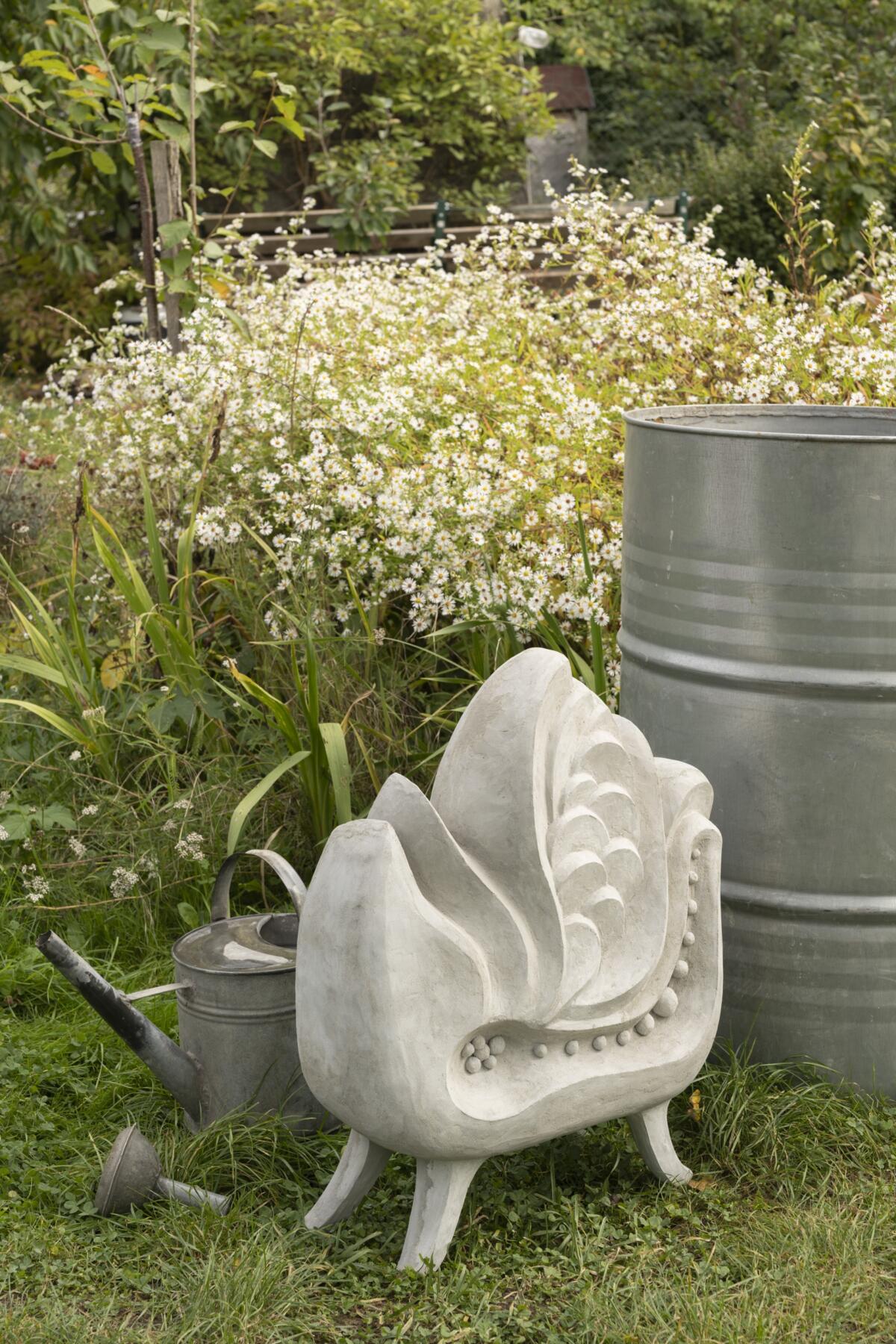 I know you are interested in working with opposing values. You have just described how you turn the historical utopia of industrialization of agriculture into a contemporary dystopia of environmental degradation. But then, looking more closely at the role of water in this work, its reincarnative, life-giving potential, I again became convinced that the overall message was positive, even soothing. Is there also hope in your vision?

As you mention, I want both to be included in the work. Both material and thematic contrasts. And when I approach a sculpture that represents a dystopian mood, it can still carry a kind of exaggeration or humor, like life contained in detail. This humour embedded in the detail is precisely the surviving soul – the life in the concrete masses.

The same goes for the sculptures you call hybrids or mutants: do you see them as organisms degenerated by ecological catastrophe or as an opportunity for new, transformative life forms?

Again, both are intended. Animals have a tendency to transform and mutate because that is what ensures their survival. They either die out or take on a new form of existence, albeit in more aggressive forms.

I also have to ask you about the material of the artworks. Why do you choose to work in concrete?

For me, concrete is a very eco-controversial and symbolic material. It carries a kind of brutality. Its origin is also very rough and at the same time it is the material we are most often surrounded by. It is everywhere and in all sectors, and such a commonplace material that is becoming a folk construction material for modern man. On the other hand, I like fragile, surreal elements, which I like to combine with these brutalist and futuristic aesthetics and forms. So brutal concrete can be a great base and in combination with other materials, shapes and thematically produces a refreshing contrast. Are your works created in closed thematic series? In Białystok you present sculptures created over the course of several years, which nevertheless creates a coherent installation, a landscape.

What would you like to work on in the future?

I am still keen to continue developing the theme of agriculture further. 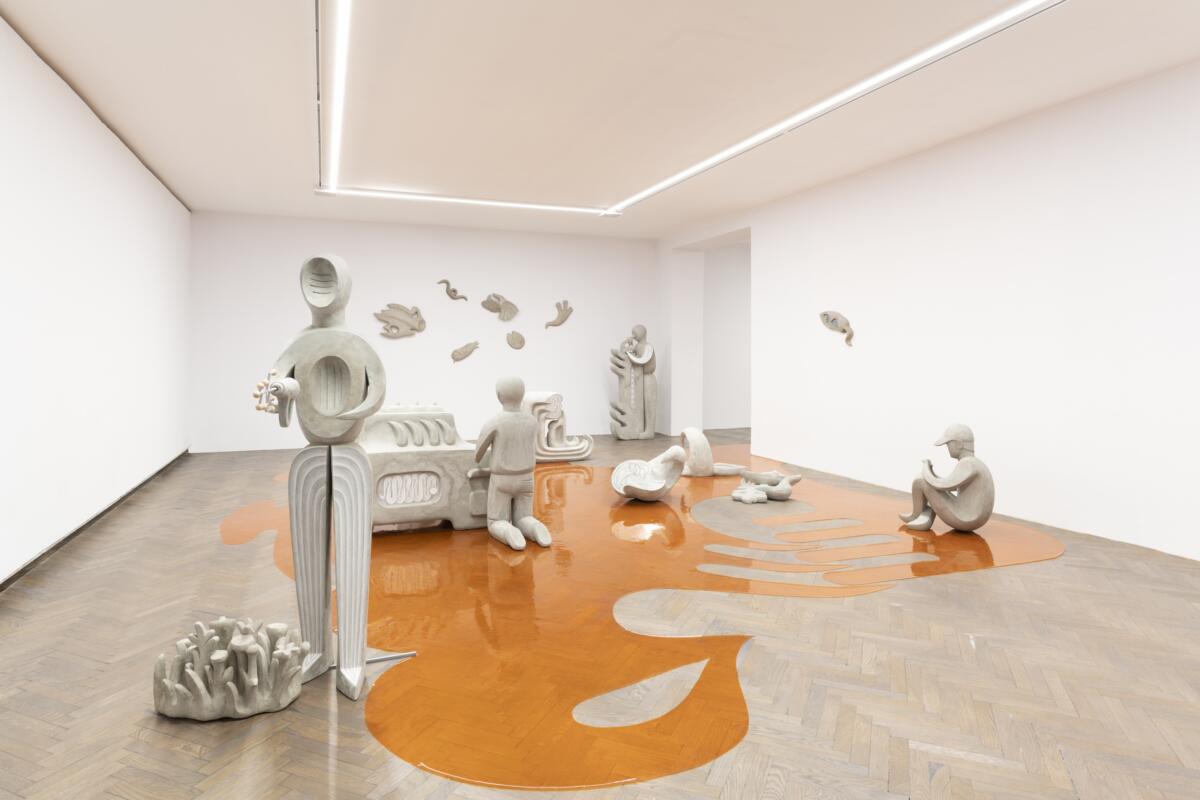 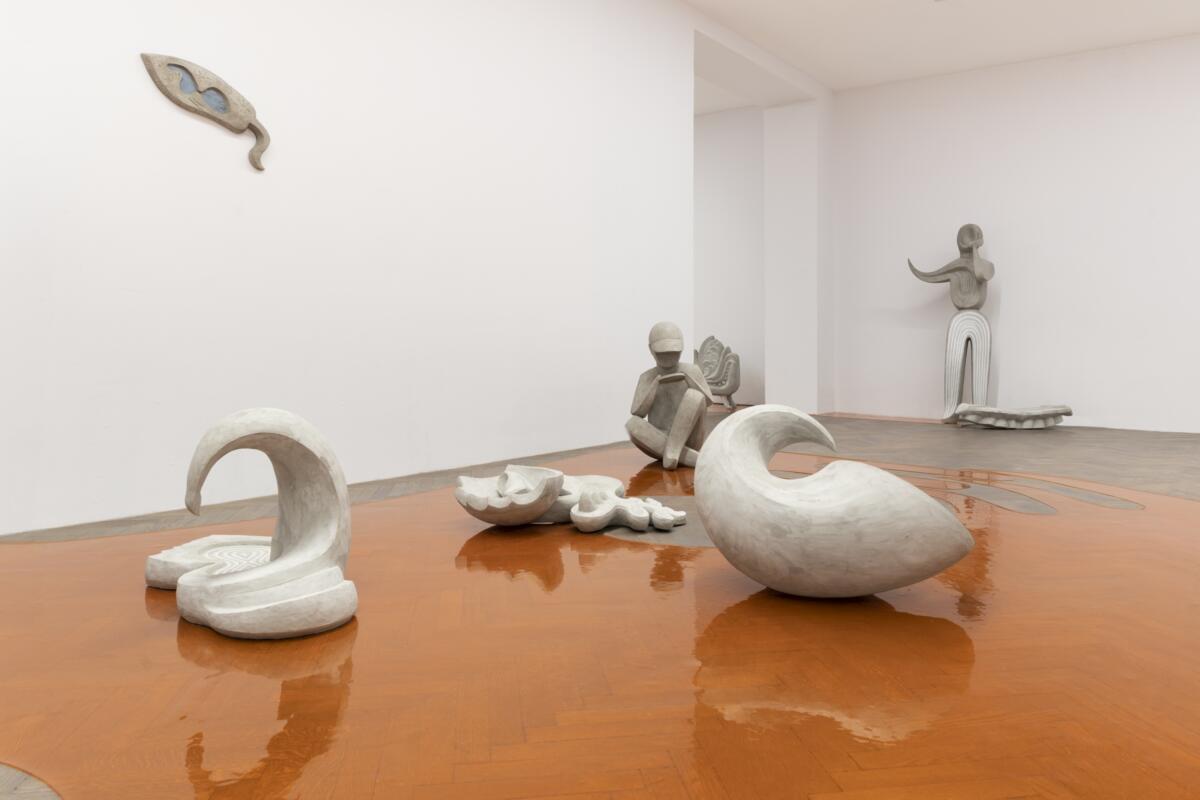 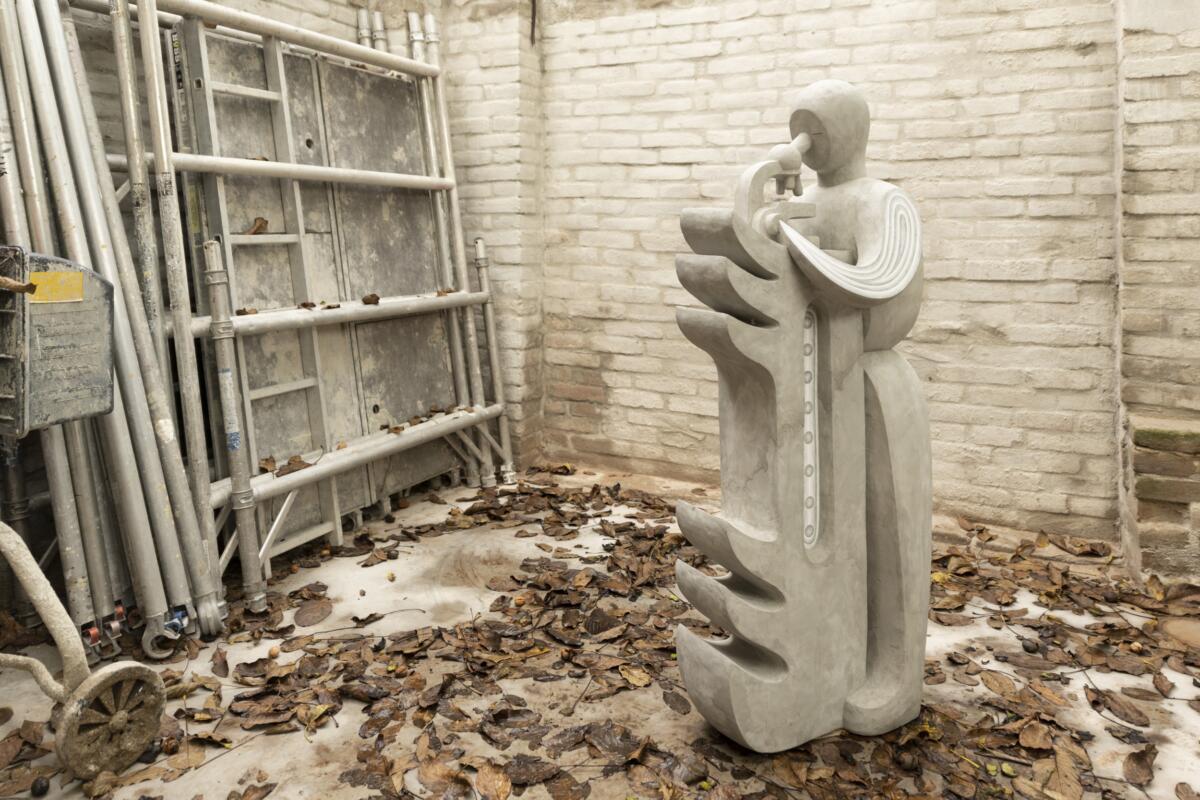 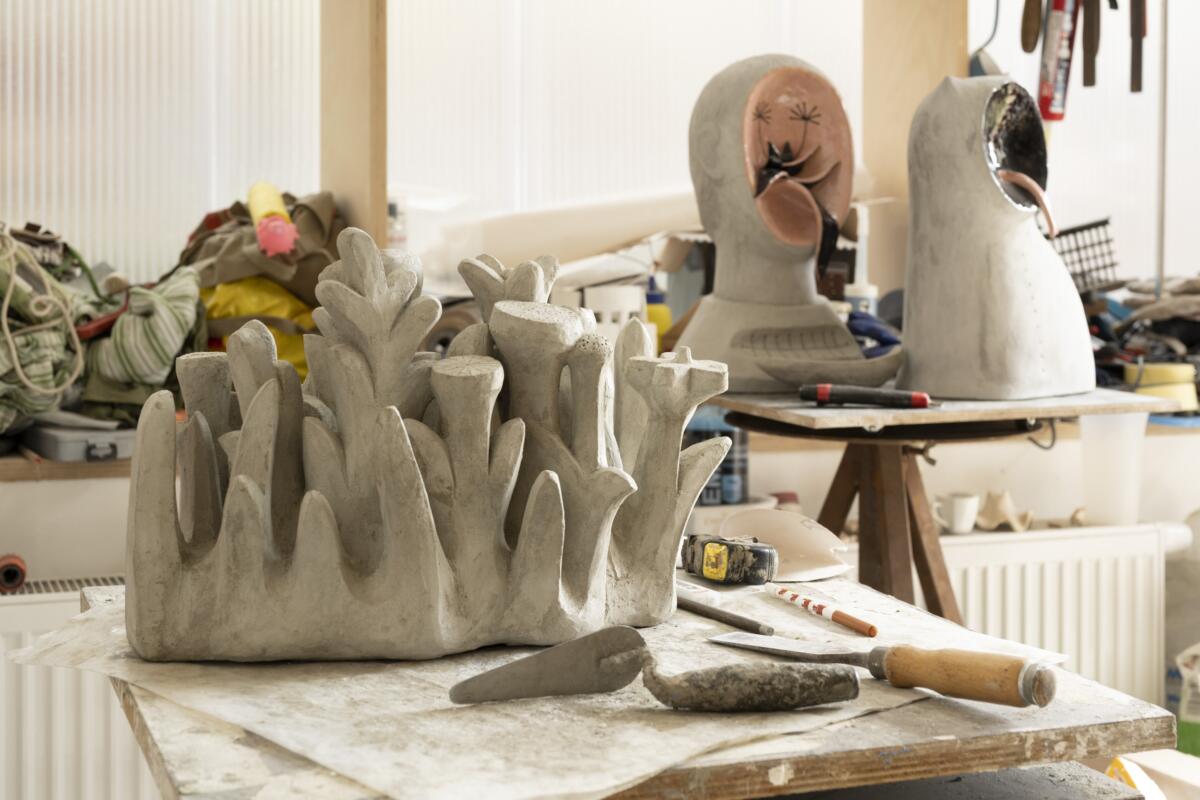 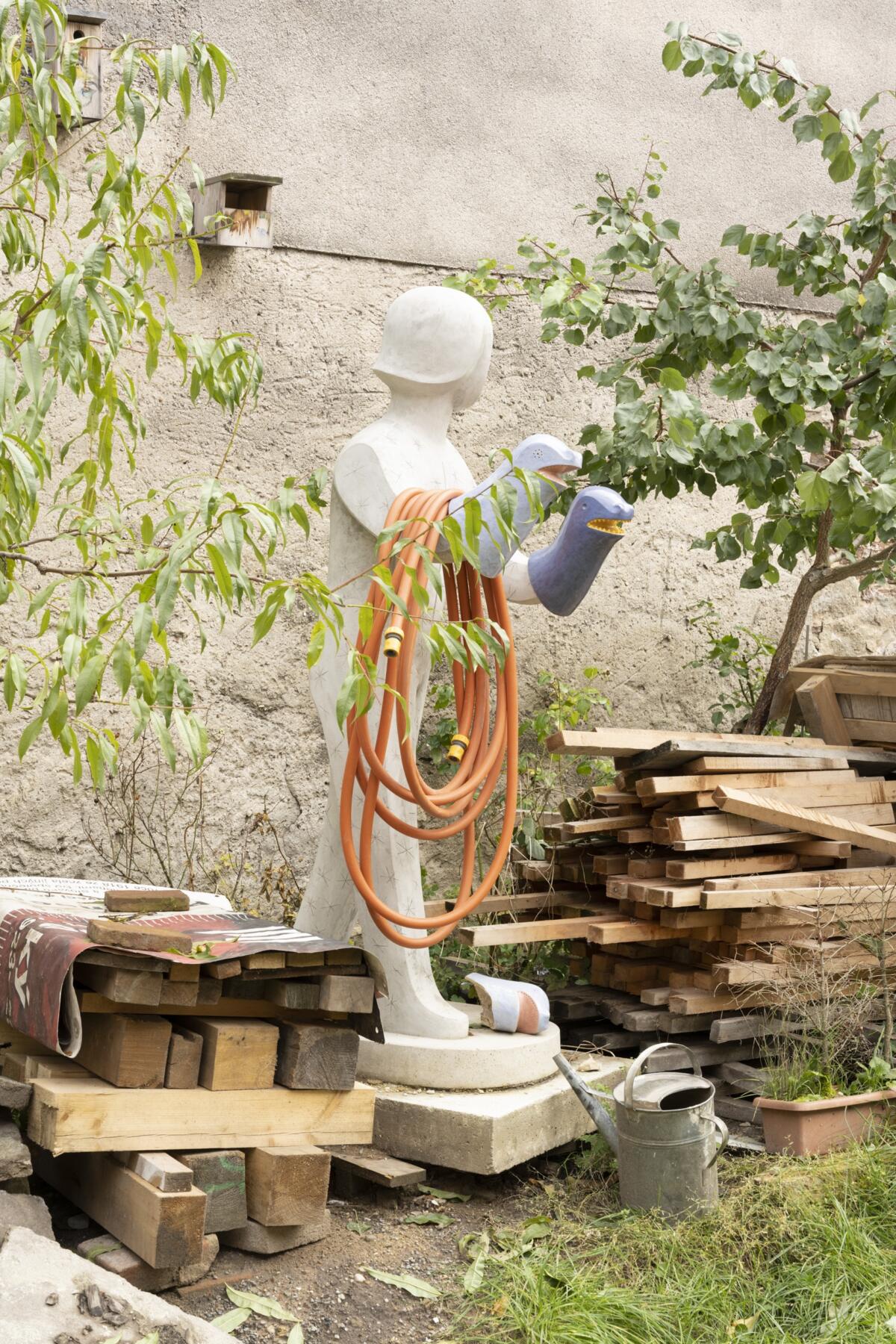 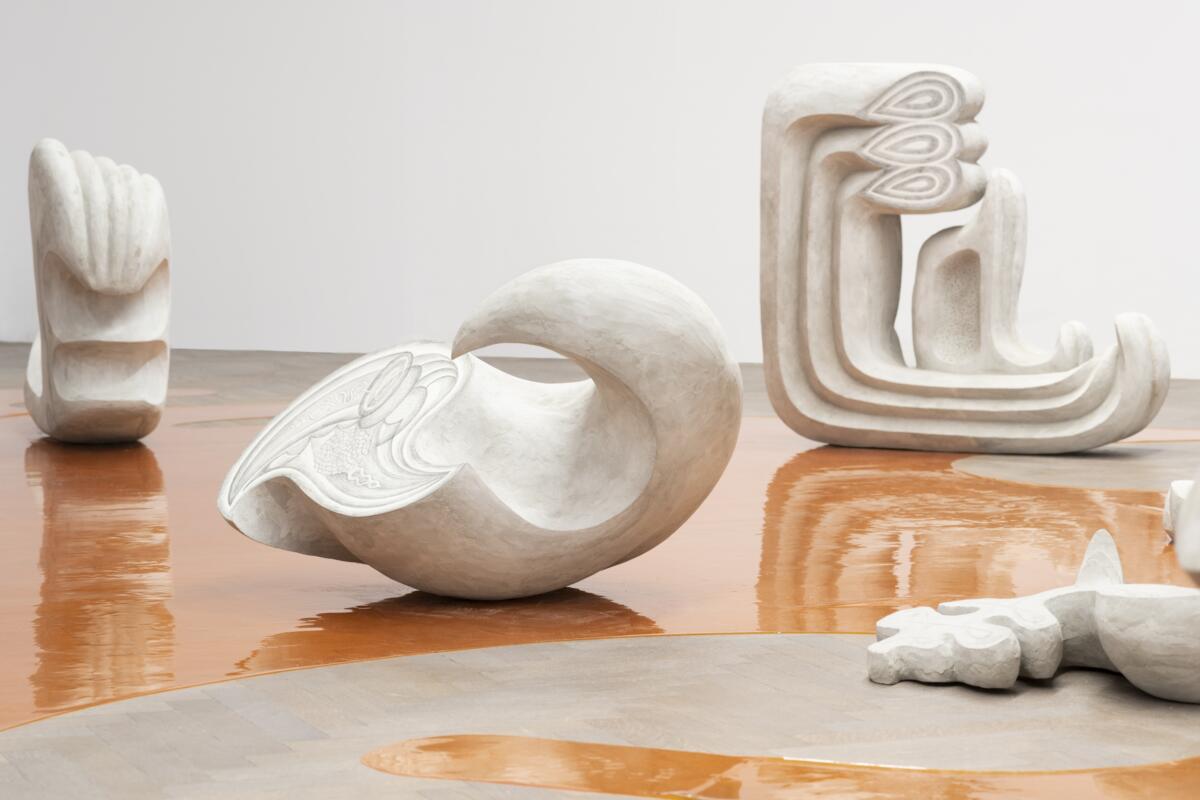 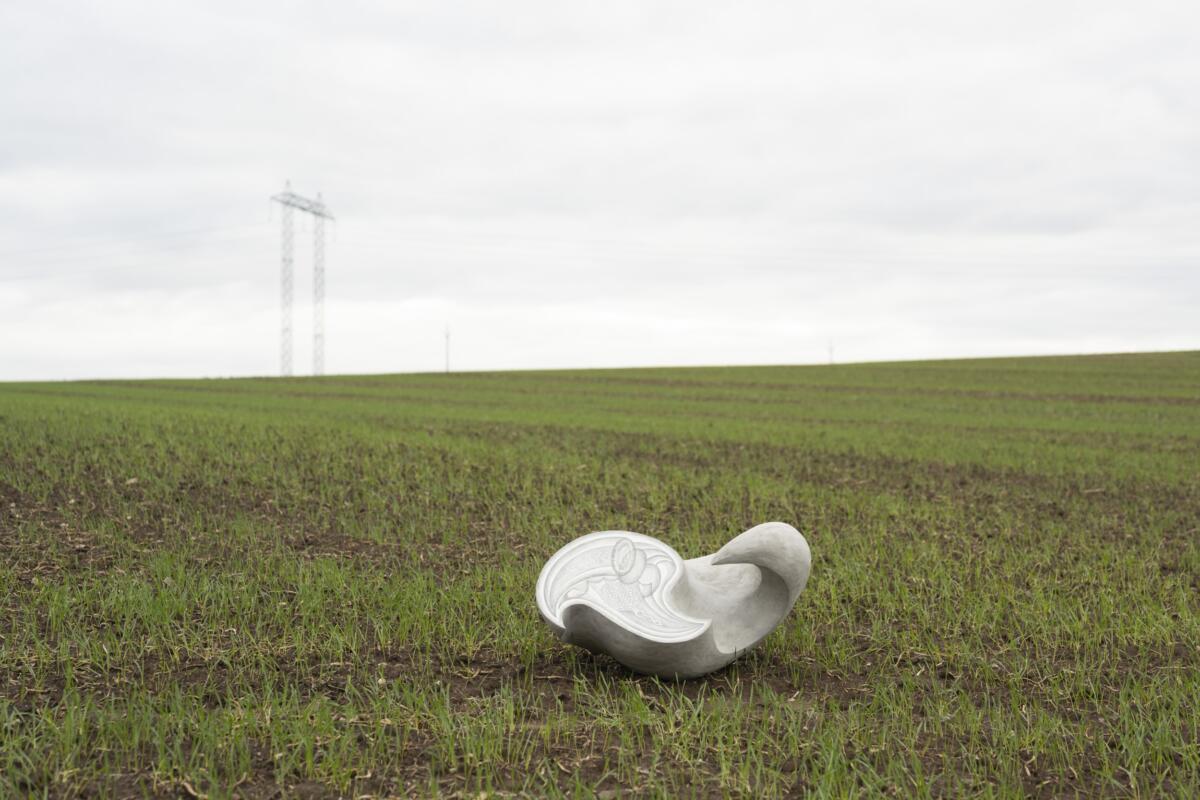