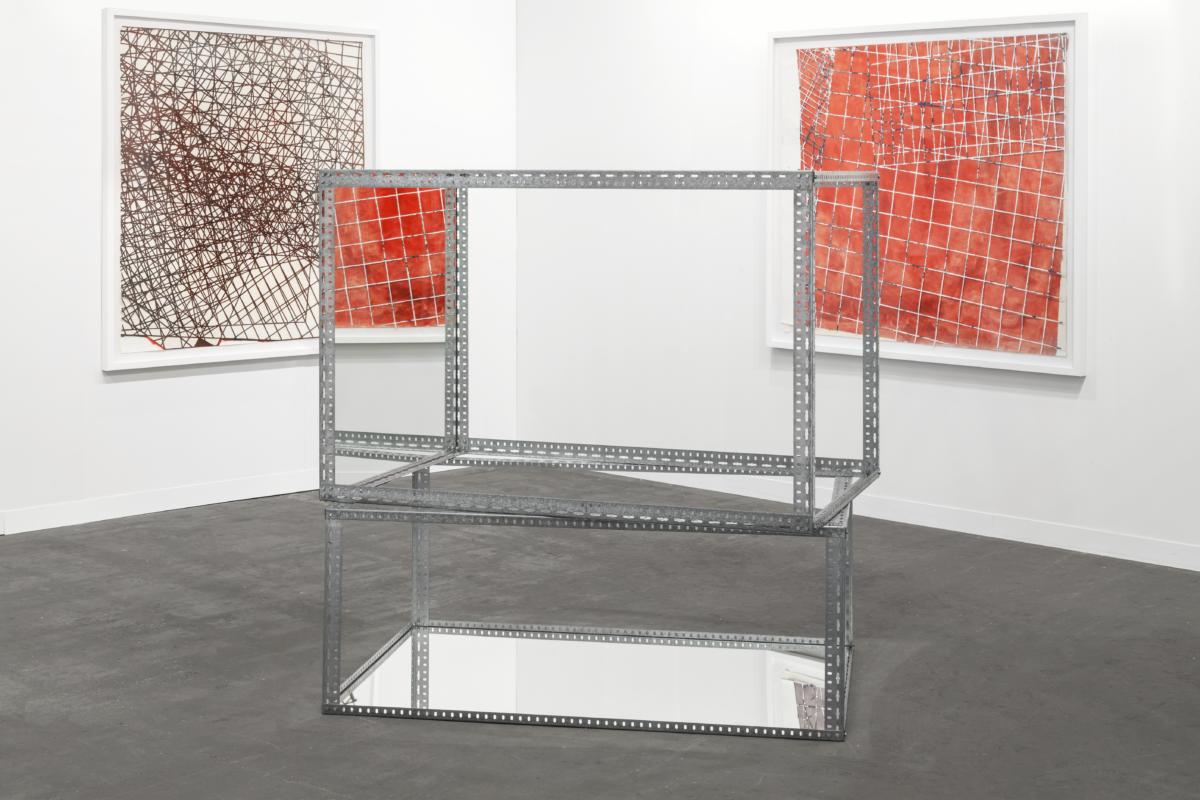 Marek Bartelik, President of AICA International, on the most interesting events that took place in New York last month featuring artists from Central and Eastern Europe

Leon Golub’s exhibition at the Museum of Death in 2004. Golub’s major retrospective took place at the Brooklyn Museum in 2001 (originally organized by the Irish Museum of Modern Art in Dublin), and he had the world of 1984. In the 1980s, Golub was a huge success in the 1980s. Julian Schnabel, David Salle, or Francesco Clemente, all of whom would have major museum exhibits in New York City (Schnabel and Salle at the Whitney Museum of American Art, in 1988 and 1986 respectively, and Clemente at the Guggenheim in 1999-2000) .This is a bridge to the modern art, “ugly,” “grotesque,” “creepy,” and “violent.”

In 2001, many people wondered why Golub’s show was not held at MoMA, or the Museum of American Art. Moreover, Leon Golub has had a very important, bold figurative paintings that have become strong, political and social messages. At the same time, the artist welcomed to the art of violence. The explanation for the museums ‘seemingly not too much of the world in the world.’ violence.

Golub called museums “the highest achievements of capitalism.”. MoMA and other museums, which can be donated to wealth, don`t argue, with little or no discrimination …

MoMA owns Gigantomachy I , 1965, and the gift of Ulrich and Harriet Meyer in 2000. Now the Met owns Gigantomachy II , who was married two years after Golub (and his artist-wife Nancy Spero) returned to the US from Paris, and joined the anti-Vietnam group Artists and Writers Protest. It depicts a group of naked males, engaged in combat, but is looking antihero, with differences between aggressors and attacks. In fact, the men in the painting Appear more than flayed naked, Which also makes sense because Golub interpreted the canvas in his paintings as “the skin of the earth.” The wall label next to Gigantomachy IIemphasized that the men were “generalized,” “and the so-called synthesis of many sources,” and, therefore, any direct reference to the Vietnam War are absent. The same view the curator, Kelly Baum, during a tour for the press. I must say that I find this interpretation highly problematic; imagine, for instance, being told that Picasso’s Guernica had little to do with the Spanish Civil War. This downplay is a very good news for you. Golub’s works, particularly when they raise unforfortable truths, in the country.

The critic Amei Wallach mentioned in her New York Timesreview of the 2001 retrospective at the Brooklyn Museum that Golub had had problems with MoMA since the late 1950s after the influential curator William Rubin had harshly criticized his works included in the “New Images of Man” exhibition. Golub had responded to that criticism by sending Rubin a note, in which he had called him names (“a big slob” is one of them), illustrated with obscene, scatological images. Since that time the artist viewed that episode as the decisive one for MoMA’s lack of eagerness to host a solo exhibition of his work. But the reasons for the museum’s reticence might be more complex, because when Golub spoke truth to power through his art he was criticizing not only the political and military establishments, but the artistic one as well. That might be a reason why he included Nelson Rockefeller (a major trustee of MoMA), next to Francisco Franco, Richard Nixon, Ho Chi Ming, General Pinochet, and Ernesto Geisel, in his series of portraits of corrupt, morally dubious political figures produced between 1975-78. Golub called museums “the sacrosanct temples of art” and “the highest achievements of capitalism.” Of course, such comments were a subtle criticism of MoMA and other museums, which cater to wealthy donors, one might argue, with little or with no discrimination…

Visiting the Golub exhibition, I heard, again and again, the comment that Golub’s works look as relevant today, in “Trump’s America,” as they looked in the troubled 1960s and 1970s.  Indeed, they do look relevant, but not only because today’s America is once again strongly divided along racial, gender, and religious boundaries. It is also because the influential museums in this city keep being supported by dubious sponsors. What has been changing is that they not longer look like “the sacrosanct temples of art,” but, instead, increasingly resemble shopping malls (even architecturally), with their galleries serving as the “entertainment hubs.”

An individual exhibition of Abakanowicz’s work has been an annual event at Marlborough Gallery, which has represented her since 1989. This was the first such show since the artist’s death last April. Although we have been witnessing the growing presence of younger Polish artists on the international scene since the collapse of State Socialism in Eastern Europe and the Soviet Union, Abakanowicz is still the most internationally recognized among them, at least that’s how it can be viewed based on the presence of her works in major museums all over the world. She might also be one of the last “heroic” artists coming from Poland, one who strongly believed in the transformative, visionary, or cathartic (catharsis appears in titles of her sculptures and prints) power of her art.

One surprise to me in this show was “Coexistence,” which in a way might be viewed as emblematic of the main change in Abakanowicz’s works that had occurred in the late 1980s, when she had started to emphasize the “ecological” and “environmental” aspects of her art over the “political.”

The exhibition presented a wide range of Abakanowicz’s canonical works: from a large sisal weaving from 1971, entitled, Abakan Rouge III (which to me looks like a giant red vagina), to two pieces from the splendid series “War Games,” 1989-90, to a series “Coexistence,” 2002, which was composed of a group of figures made of burlap arranged as a crowd. The main goal of the show seemed to be to highlight the wide range of works in different techniques, while, at the same time, to emphasize the uniqueness of Abakanowicz’s artistic language. Indeed, we know when we see Abakanowicz’s works that they are hers. One surprise to me in this show was “Coexistence,” which in a way might be viewed as emblematic of the main change in Abakanowicz’s works that had occurred in the late 1980s, when she had started to emphasize the “ecological” and “environmental” aspects of her art over the “political.” It was a switch that more or less coincided with both the political changes in her native country and the increasing presence of her works in commercial galleries such as Marlborough. In some way, it was also a return to the artist’s own preoccupations in her early works. But “Coexistence” looks rather curious. Yes, to a certain degree it is not dissimilar from the famous “Crowds” with headless, gender-neutral figures made in burlap or bronze—which many people have associated with the fate of people under a totalitarian regime. And the crowd in “Coexistence” was similarly arranged in rows as if during a public demonstration, an execution, or a religious ceremony. But, the figures were zoomorphized and with the heads of birds and animals it was difficult to say whether they are oppressors or victims, or both. In fact, those heads looked as if the artist had literally stuck them on the old bodies from her “Crowds,” and that realization made me see those forms as not simply some kind of imaginary, bizarre creatures, but also, perhaps above all, a visionary embodiment of the transformations of Polish society from the early 1990s to the present …

Going to art fairs has become a form of entertainment, just as going to museums of contemporary art has been increasingly as well.

I dislike art fairs, and the Armory Show in New York is one of my least favorite, for it emphasizes the commercial aspect of the New York art scene, as if we didn’t have enough reminders that this city is a major center of the art market. Looking at the list of this year’s participants, we are also reminded that today’s art market is largely controlled by an international network of powerful galleries, which decide who is selected to participate in art fairs and who is not. (There were also numerous smaller events taking place at the same time: NADA (New Art Dealers Alliance) show, VOLTA (affiliated with the Armory), the Independent, the Spring/Break Art Show, Scope, Art on Paper, and Collective Design.) With  near 200 galleries from 31 countries, this year’s Armory Show remained a behemoth among those events.  It was also the most expensive to attend: $47 general single entry, or $65 with VOLTA admission; $80 for the entire run of the show.

Going to art fairs has become a form of entertainment, just as going to museums of contemporary art has been increasingly as well. (I recall a MoMA curator arguing that their hefty entrance fee is no more that an equivalent of a movie theater ticket.) There is something unsettling in seeing a huge crowd running back and forth between Piers 92 and 94, where the show takes place, with many people holding a glass of champagne in their hands and even more of them taking selfies in front of the flashiest artworks. But, let’s stay positive: the Armory Show may also provide an opportunity to view some unfamiliar artworks of quality, and to meet a few old colleagues and friends. However, the question remains: Is it worth the hussle? I am not sure about that; for now, here is my take on the fair in a few photos:

1. People queuing at the main entrance in front of the Armory, Pier 94, with JR’s “So Close,” in which the faces of old immigrants passing through Ellis Island have been replaced with those of current Syrian refugees. I must say, I found these collages “distasteful.”

2. The owner of Jane Lombard Gallery, Jane Lombard, and the gallery director, Lisa Carlson, in front of their booth with a site specific installation by Lee Kit, which includes a pink monochrome painting that reads “It smells like you.” 4. Many booths looked like installations themselves. Fragment of a booth of Wetterling Gallery, Stockholm. 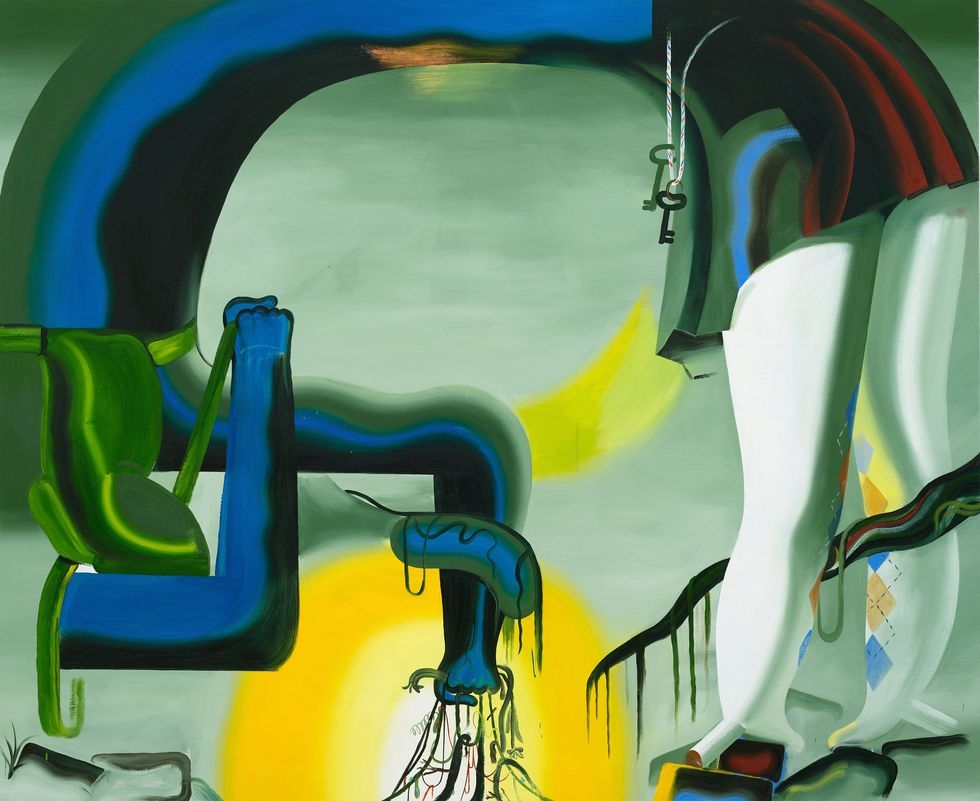 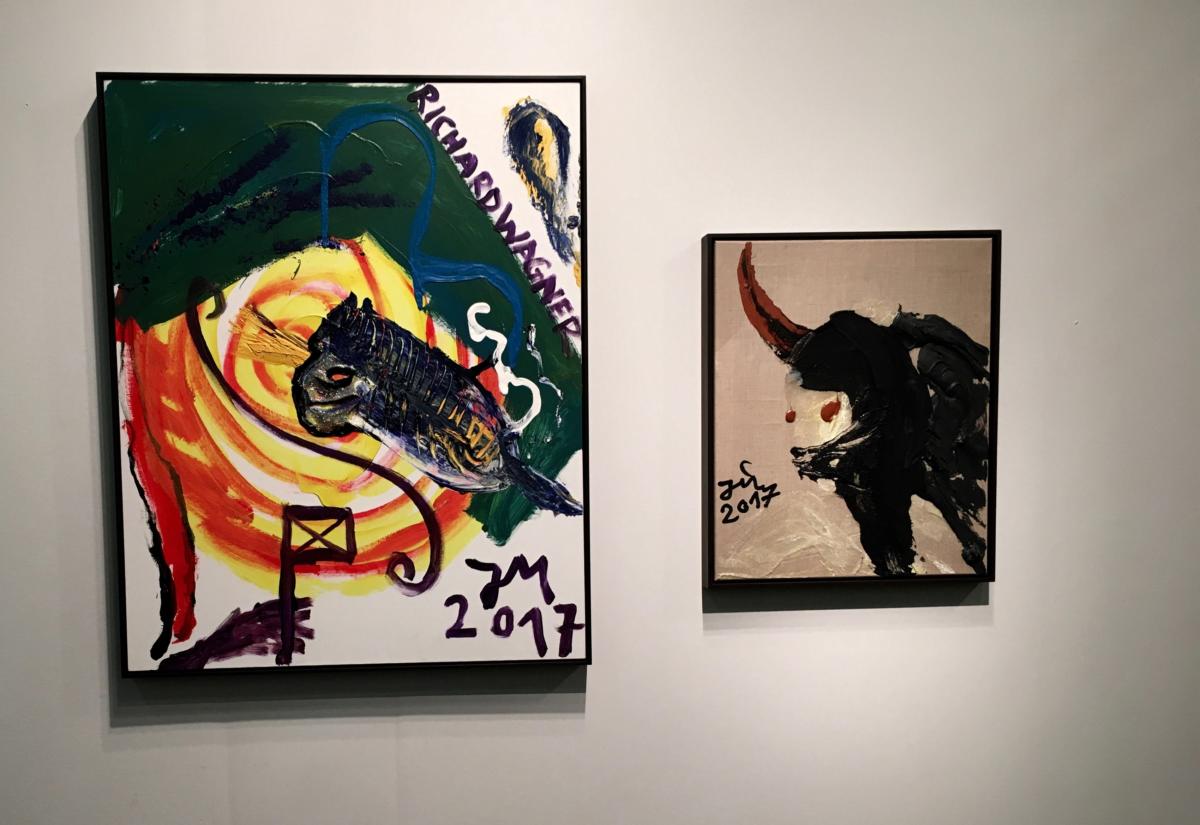 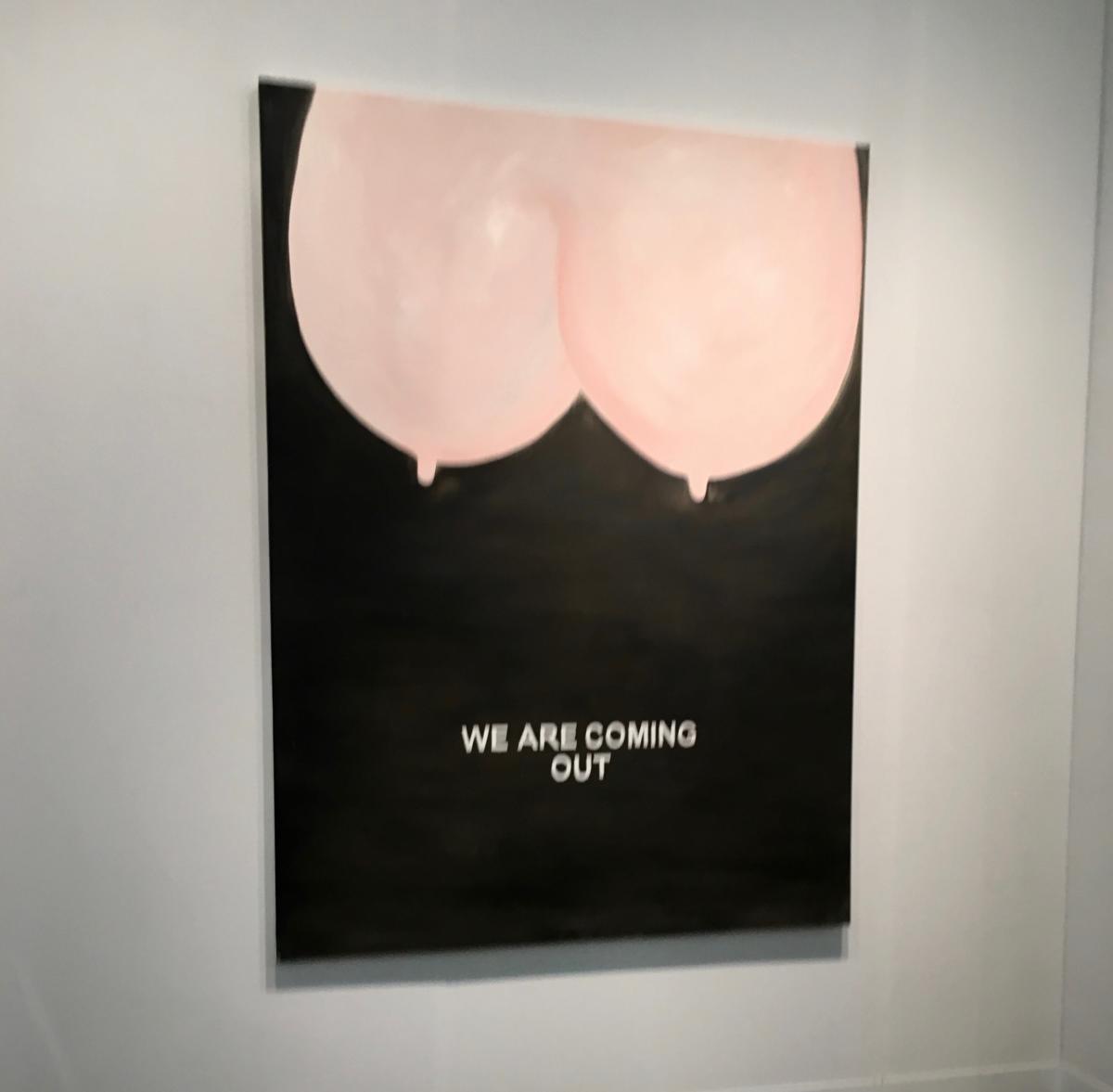 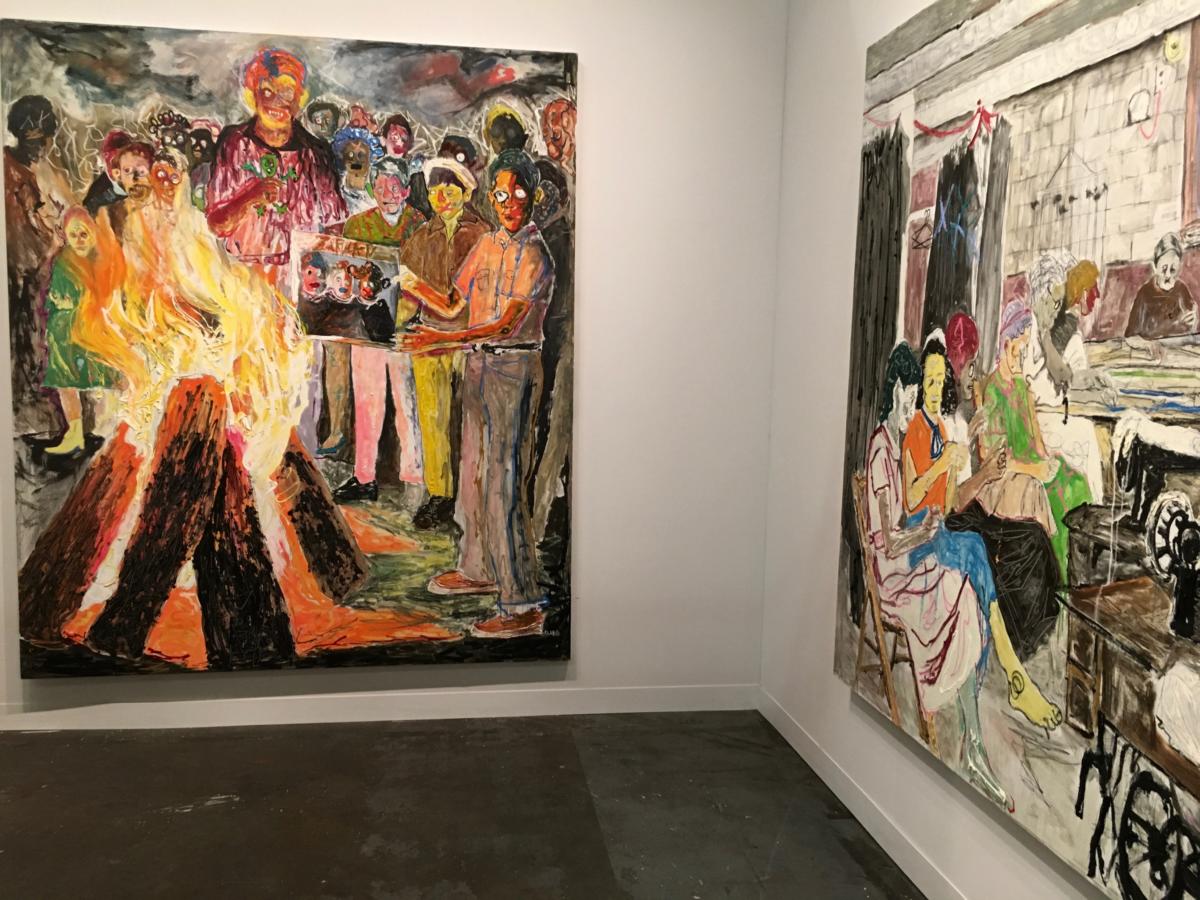 11. No Polish galleries. The only Polish artist I noticed was Marlena Kudlicka showed by Żak/Branicka from Berlin; Elements of Peaceful Engagement, discrete 0.2%, 2018, powder coated still and glass. 12. This image represents what Armory Show 2018 might have been about: a “puff,” as in the Dutch artist Berndnaut Smilde’s The Fourth Wall installation (part of the PLATFORM project), in which a vaporous cloud appeared at random on a theatrical stage during the show. After returning home from the Armory feeling rather dejected, I opened my computer and read in The New York Times about a protest against the donors to the Metropolitan Museum in New York with a self-explanatory title: “Opioid protest at the Met Museum Targets Donors Connected it’s OxyContin . ” Clearly, the battle is far from being over.