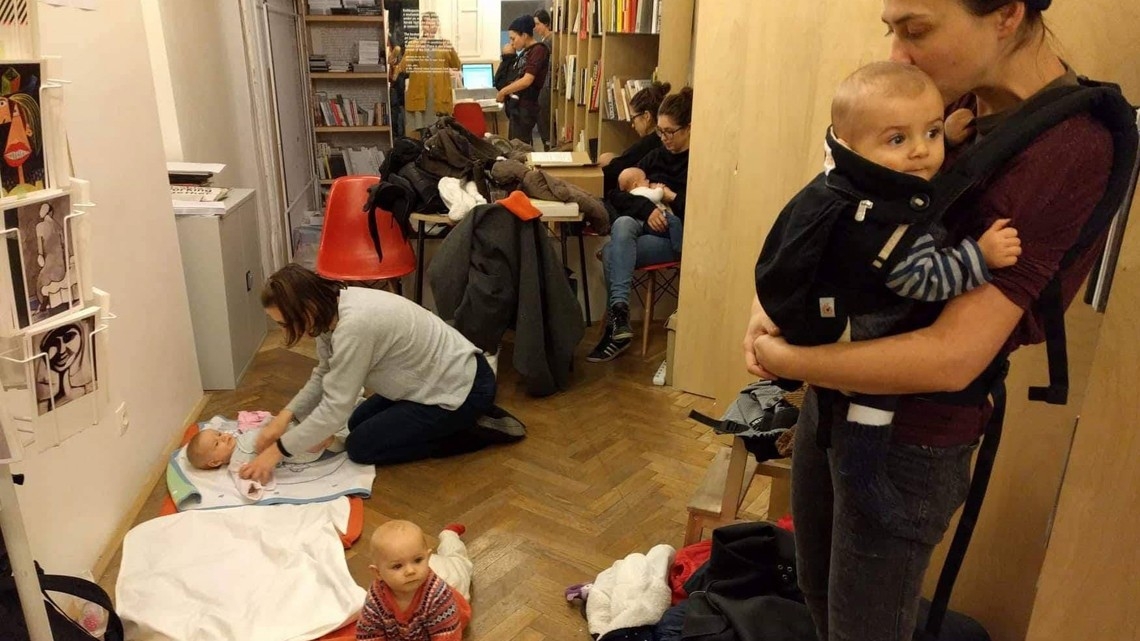 Photo: Tereza Stejskalová
There are limits to what small organizations can do. How do you engage in conversation with your enemies? How do you get to speak with anti-feminists and what do you even tell them? Those are relevant questions once you don’t want to live inside a bubble within a fascist hub.

As part of the program of Tranzit, the gallery you work at as a curator, you initiated Feminist (Art) Institution. It is a network and a code of practice currently signed by 11 institutions from the Czech Republic and Slovakia. What was the impulse to do it?

I had always been frustrated by the hypocrisy I observed in the art world – the discrepancy between what institutions speak about, and how little it affects their structures. In 2016, during Gwangju Biennale in South Korea, I took part in a meeting of progressive art institutions from around the world. [Art theorist and professor] Andrea Phillips led the discussion and tried to determine what the participants have in common to create an alliance, and she said “of course we are all feminist and anti-racist.” It sounded obvious, but I kept thinking about what it meant and wanted to find out. At the time, a new wave of young women became active in the art academies in Prague, speaking up and addressing gender inequality. We started meeting in seminars, together with activists, feminist practitioners and theoreticians. In 2017 we wrote the code of practice together.

In your approach, feminism is treated not as a fixed position, but rather a starting point for a process. What did you learn?

In one seminar Ewa Majewska spoke about weak resistance, and that a feminist art institution should be a weak institution. That resonated with many of us. By that time some art galleries in Prague, such as Display were already interested in the topics of health and ableism. It opened up a perspective of viewing the art institution not as a hero, or a super successful and never tired assertive male figure, but rather from the perspective of care, and an openness to different types of bodies.

How did the theoretical conversations translate into the institutional practice that you articulated in the code?

The code is simultaneously vague and specific. We created a network of institutions that cared for each other, which was also an intervention into the competitive situation of fighting for limited resources. For a feminist institution, the notion of care and different kinds of relationships with the audience is crucial; that is, ways to accommodate communities that would not feel comfortable in a traditional art institution. There are limitations to it, as you can’t open up for everyone at once, each marginalised group’s needs are different. And not to mention quotas – the code stipulates a 50% quota, both on the side of management and representation. This is an important part of the code, and it was obvious for us it had to be included, we didn’t even have to discuss whether it was important or controversial.

And what was controversial?

Money. The code says that unless you are operating on a DIY basis – if you are funded by the state, a municipality, or a private donor, you have to improve your own labour conditions and you need to pay not just your employees, but also your contributors and collaborators. But this is very hard, sometimes I see people who pay for the labour of others, but they don’t care for themselves and become precarised. It’s tricky.

For a feminist institution, the notion of care and different kinds of relationships with the audience is crucial; that is, ways to accommodate communities that would not feel comfortable in a traditional art institution.

How does the project continue?

It started to travel virtually. Sometimes I get emails from people abroad who are inspired by it, but it lives on independently. But there is a local dimension: the institutions in Prague who are part of the network do come together sometimes and share ideas and revisions.

And the resistance? We are sitting opposite the National Gallery, which did not sign the code.

The National Gallery did not sign; but for example, the Chalupecky Society, which organizes exhibitions there, did. There are multiple ways to get inside.

I understand that some conservative institutions do not adapt easily, but what about the criticism from within the liberal art scene?

Two kinds of critical voices appeared from inside the community. The first, responding to the heteronormative language of the code, came from Transparent, an organization fighting for trans rights. Secondly, some feminist art historians complained that the code doesn’t even mention art. While I agree with the normativity of the language, and I am open to revising it, regarding the second issue I totally stand by the code. It intentionally doesn’t mention art because if you want to get into a discussion of aesthetics, it will be a completely different conversation. There can be a feminist art institution that I personally don’t consider aesthetically valuable or nice.

So, it is about the rules on which institutions operate, not the content.

You can’t really separate them, the principles influence the content. Once a feminist institution follows the principles, it can’t not influence the displayed art. But to focus the conversation on art would just exclude people who have different aesthetic choices.

Now there is also an environmental aspect: Feminist Art Institutionwas the initiator of a letter to the municipality of Prague to declare a state of climate emergency.

We had been continuing our meetings, but it got a bit tired and we needed new energy. We knew that care for the environment is not separate from feminism, and we always spoke about how important it is to build coalitions also outside of the art scene. Starting to talk about ecology helped us broaden the conversation. We organized a workshop, invited scientists, activists, politicians, and party members. It was a great conversation: they educated us, and we educated them back.

And when there was a question whether Prague should declare a climate emergency, we took a stand and issued an open letter. We managed to collect eighty signatures including galleries and NGOs, but also big institutions like the Academy of Fine Arts, or the Museum of Art and Design.

You started with gender equality and shortly after, started advocating for the climate emergency. Was there any criticism for shifting the focus?

There was some criticism that the work hadn’t been finished yet: the question who can enter certain institutions and who can be represented by them hadn’t been solved. My response to this criticism is that our work is just as much about how you communicate feminist ideas to people outside of feminist circles. For me, this is not an end but a means of how you communicate these ideas to other contexts.

We are trying to step outside our own bubbles and to create a platform of different worldviews – for example, we have a project with a Vietnamese community here in Prague. But we still operate in a bubble and I think there are limits to what institution like ours can do.

How important was it to question your own position? The art world is full of feel-good pseudo-activism, and you are tackling it by being self-critical.

Even writing the code of practice was super frustrating in itself. Because all you encounter is more problems. Funding bodies don’t care about your feminist art principles. The criteria to succeed are the very opposite of how you want to function. It’s a clash and you want to survive it. “Feminist institution of care” doesn’t mean that you have a rosy environment where everyone loves everyone and is super happy. The goal is to open up an environment where you can deal with misunderstandings, where you don’t suppress but try to live with them. It is to live with contradictions because to have a feminist art institution in a capitalist world is to do something contradictory.

What about the limitations of operating in an institutional position like Tranzit, working in a big city’s liberal bubble?

There are limits to what small organizations can do. How do you engage in conversation with your enemies? How do you get to speak with anti-feminists and what do you even tell them? Those are relevant questions once you don’t want to live inside a bubble within a fascist hub. I don’t have an answer but it’s definitely a crucial issue. We are trying to step outside our own bubbles and to create a platform of different worldviews – for example, we have a project with a Vietnamese community here in Prague. But we still operate in a bubble and I think there are limits to what institution like ours can do. Big, powerful institutions should become those platforms, but those are different institutions than the ones we have now.

And what is the place of art in all of that? Having all these problems, how can we even justify the time and energy spent on producing art?

I can answer with literature. Great books like Elena Ferrante’s or Sally Rooney’s are written from the perspective of social mobility and articulate a certain notion of class. They help us understand a kind of division in society, how we don’t understand what we disagree with. When there are elections, you look at the numbers and you just don’t understand. Those novels try to articulate this misunderstanding. Of course, who reads this book in the end? But at least we are making an effort to understand that it’s more complex than “they are stupid fascists and we hate them, let’s move them to another planet.” If there is a sense of understanding – or at least an understanding of the misunderstanding, that is the beginning of a dialogue.

Tereza Stejskalová is a curator from Prague. She is part of tranzit.cz and a lecturer at the Film and TV School of the Academy of Performing Arts in Prague. Her curatorial projects are research-based and collaborative.

Jakub Gawkowski is an art critic, curator, and graduate student at the Central European University.

This interview was first published in New Views from the Bloc.

Waiting Room as a Harbinger