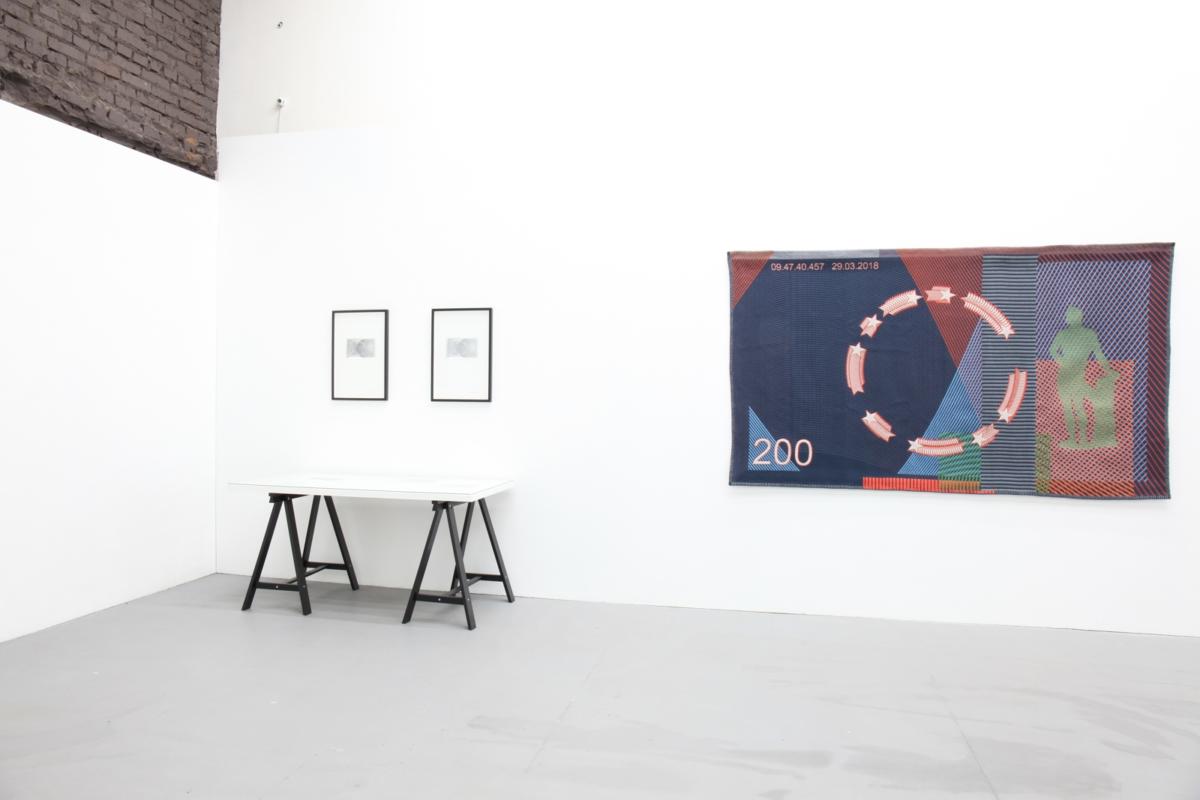 The artist continues relating social and political issues with the formal language of her painting installations, this time pioneering a ‘hypnotic abstraction’ through the work with computer codes and repetitive circular gestures.

The central piece of the exhibition is This Certifes That that also gives the show its title. It was shown for the first time in 2016 in Popova‘s solo-exhibition After Image at Nottingham Contemporary. This Certifes That is a code-generated computer performance projected on a wall with sound. A computer in real time generates images reminiscent of Euro banknotes in denomination of 5 to 500 Euro (with convoluted and interlocking Guilloche lines and 3D scans of sculptures from The Collection. Art and Archaeology in Lincolnshire, a museum and gallery in Lincoln, UK). The elements that make up the image constantly shift in potentially in nite patterns, at some point the whole sequence crashes, and then rebuilds itself. The visual stream is accompanied by a soundtrack that can be described as an algorithmic composition (sound developed in collaboration with Rebecca Lee, and inspired by Cornelius Cardew’s music experiments). A constantly morphing sonic landscape is built from different sources, including sampled audio, human and simulated voices. The computer voices with different accents read sentences which are randomly selected by the machine-world to formulate different propositions. 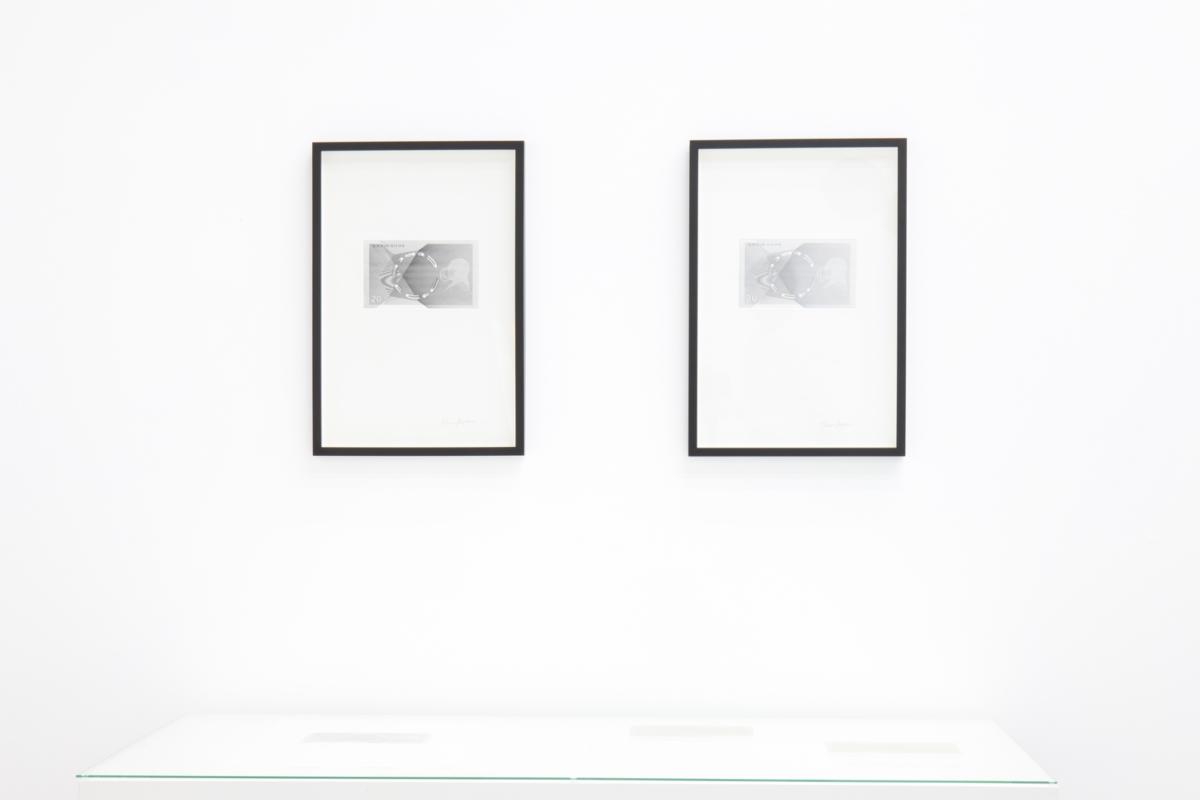 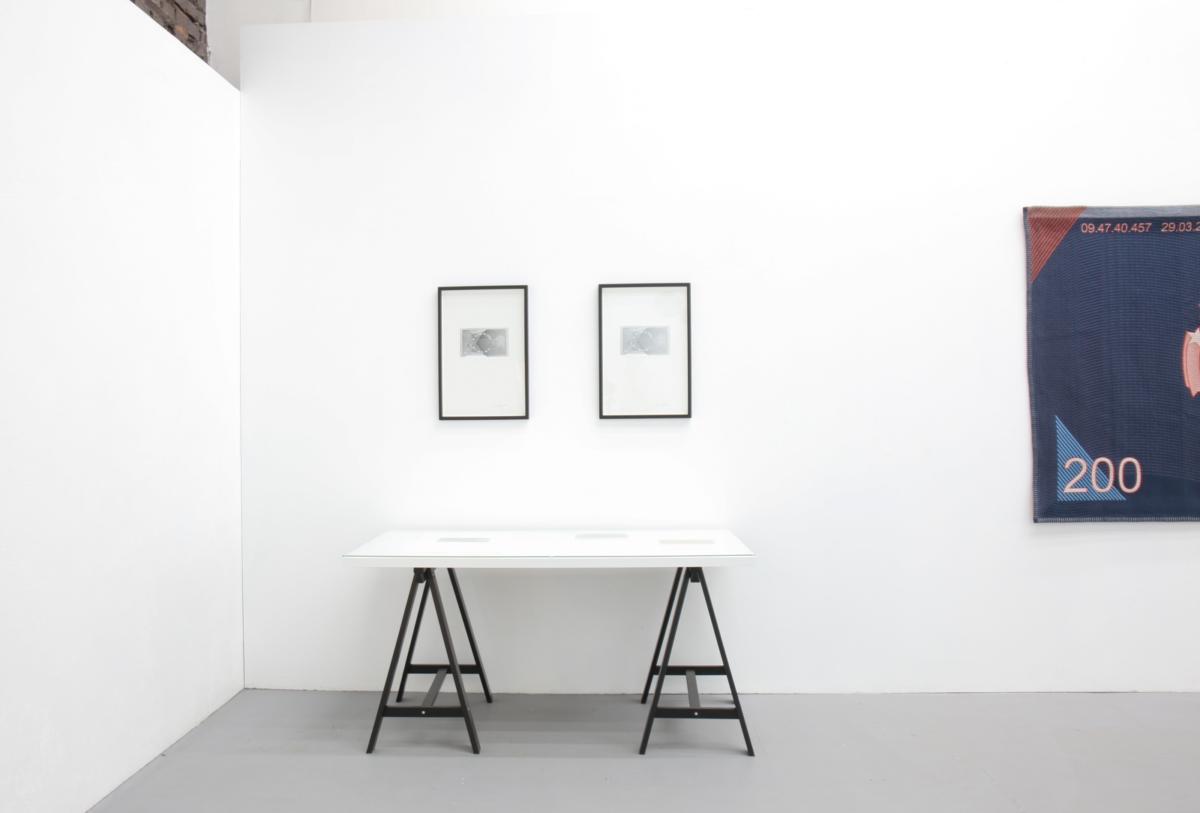 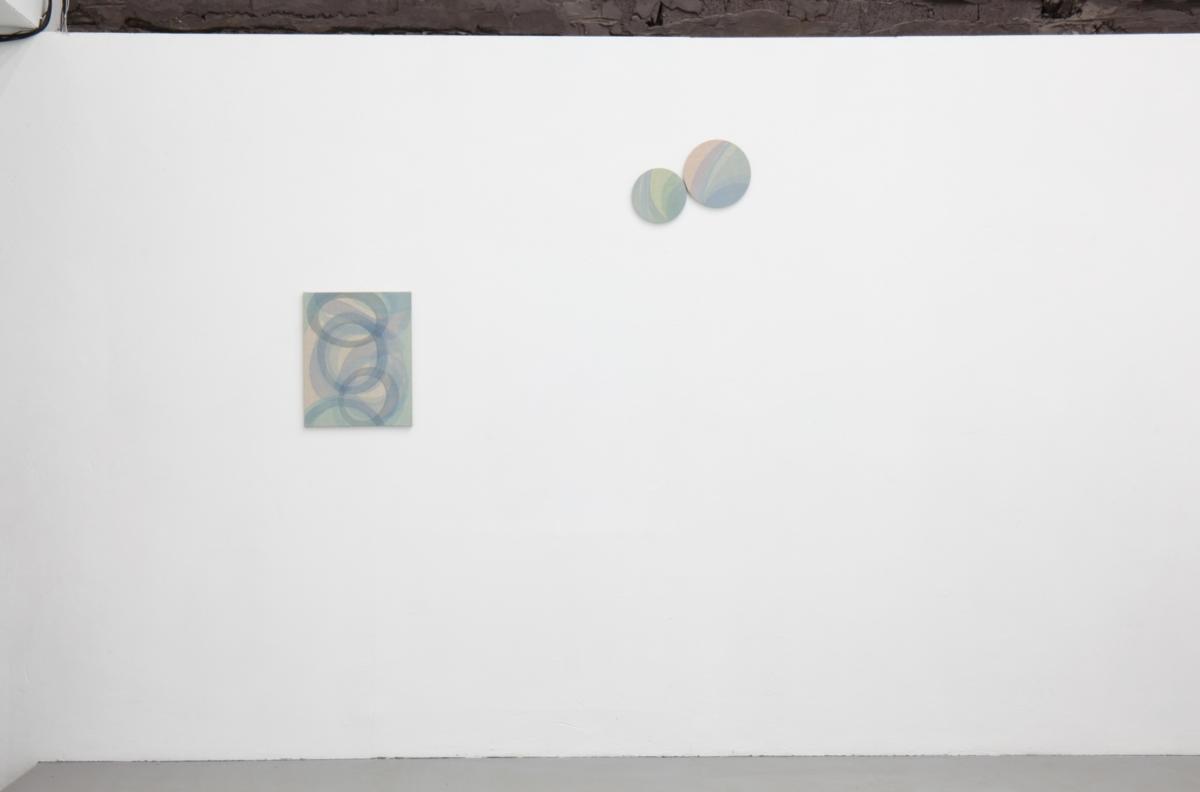 Yelena Popova was inspired to do this work when reading about a group of anarchists around the photographer, engineer and inventor Leon Warnerke, that attempted to crush Russia‘s (and with it the world‘s) economy at the end of the 19th century – by flooding the market with an excess of forged banknotes. So, the global market, the invisibility (and enormous effectiveness) of the financial currents, the fact that the banknotes abstract the value by certifying it, all play a role. But also, the excess of images, goods, currency, and of course, the contemporary problem of algorithm generated Tweets that influence our consumer and political choices. The hypnotic effect of the movement of the capital is formally empathized by the infinitely rotating ring of stars (in the projection) and by the repetitiveness of curvilinear gestures in the adjacent paintings.

Popova’s painting installations play against the conventions of painting display, the equilibrium of the installation can be seen as an equivalent of a (still utopian?) dream of balance of the economic powers. The paintings are made with Popova’s own medium with the layers of transparent paint creating a bodiless image, similar to the immateriality of digital images. 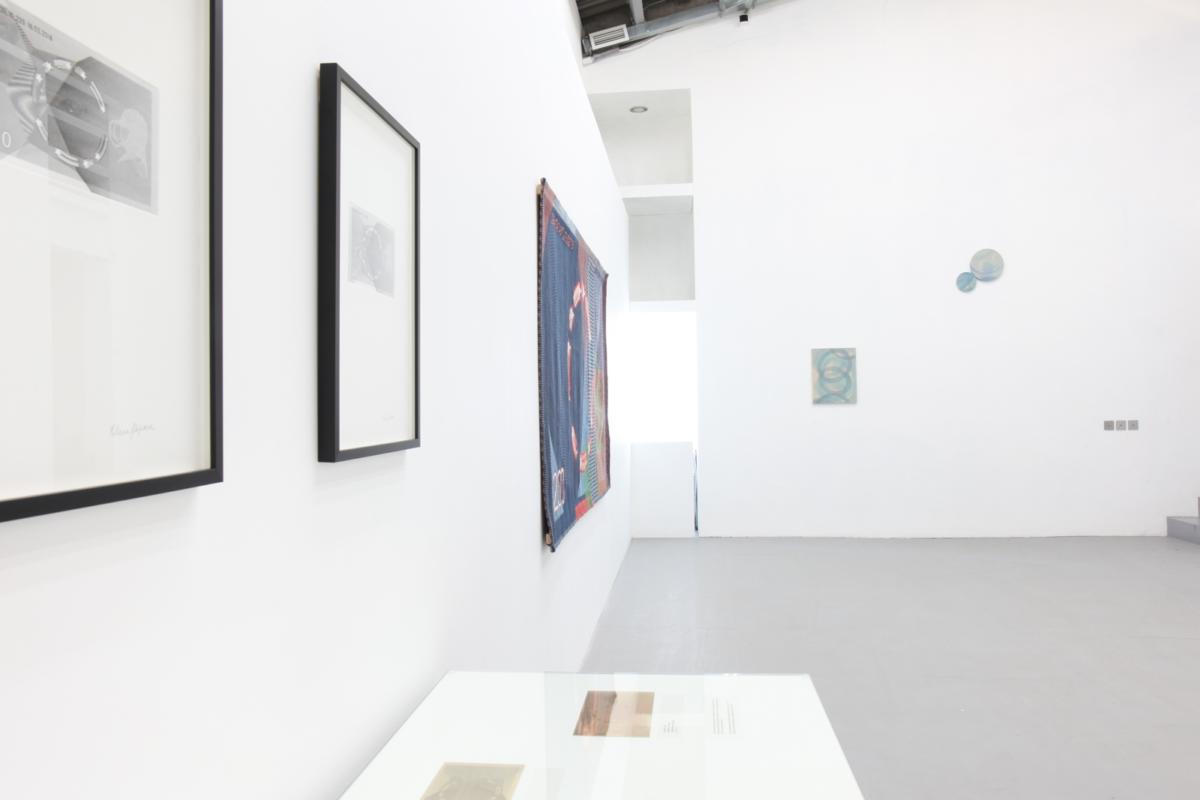 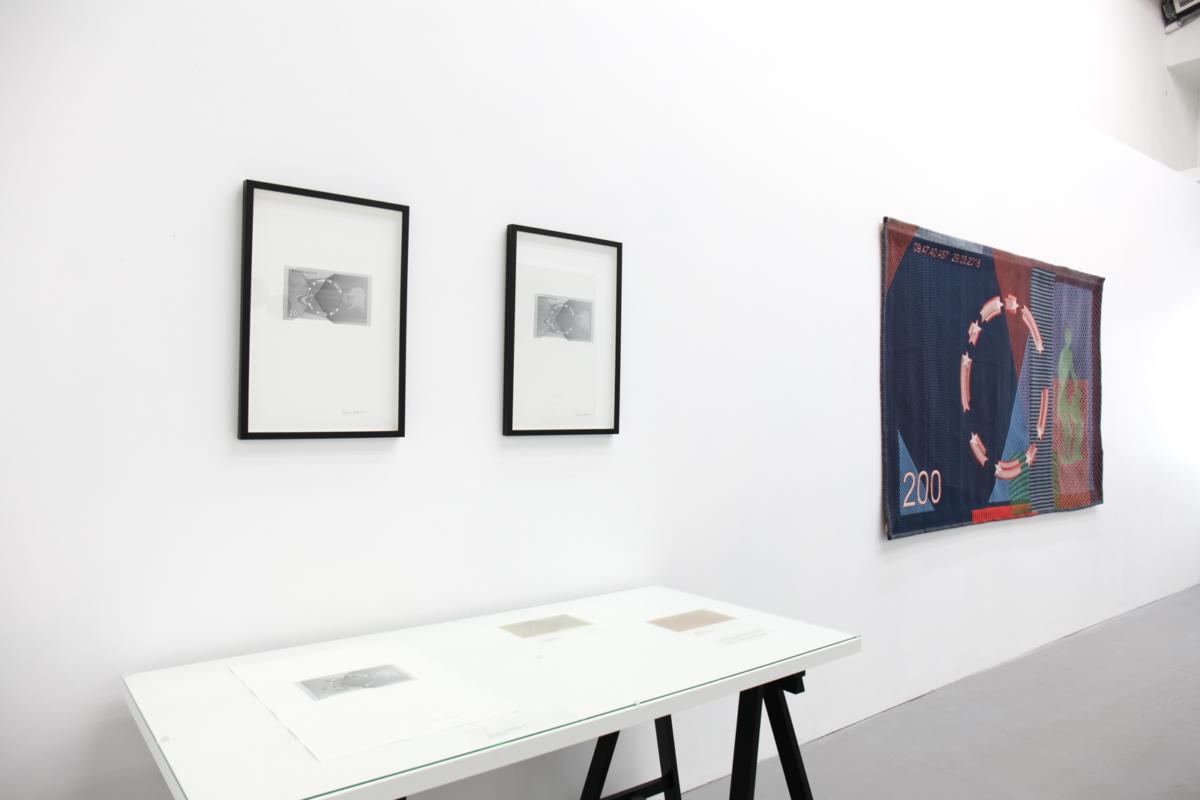 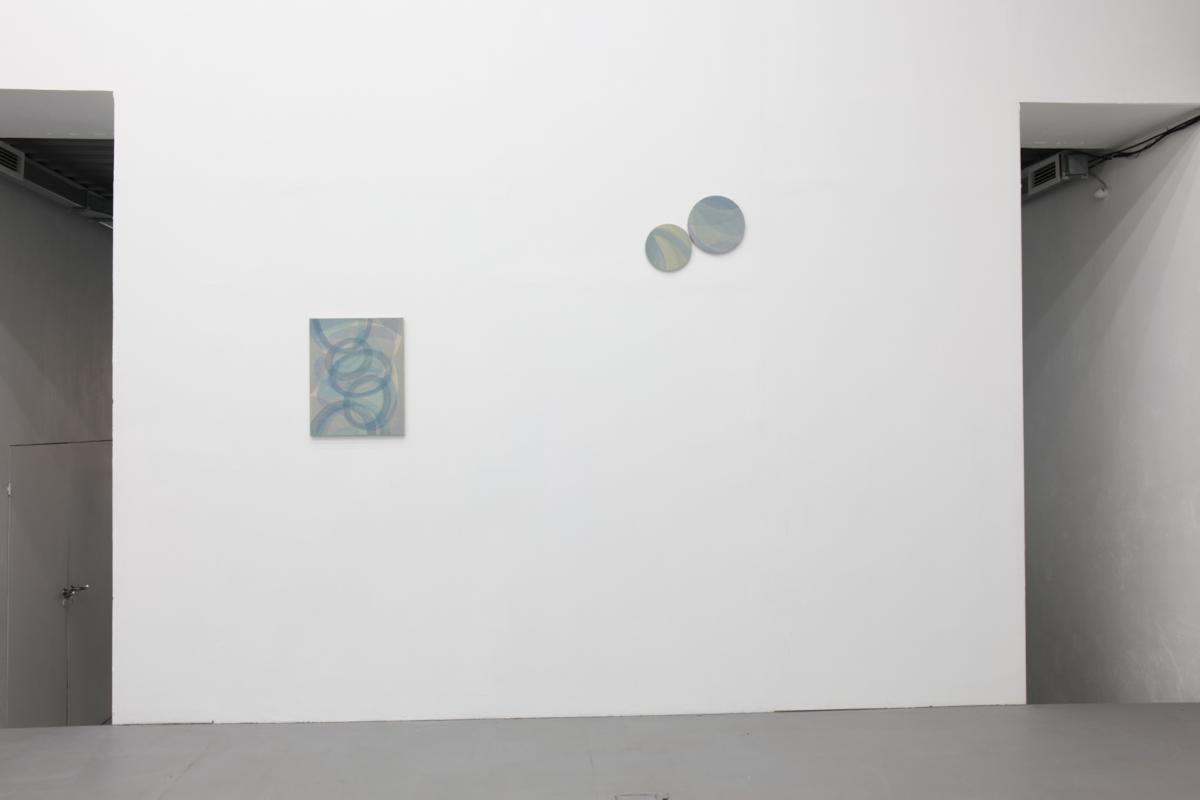 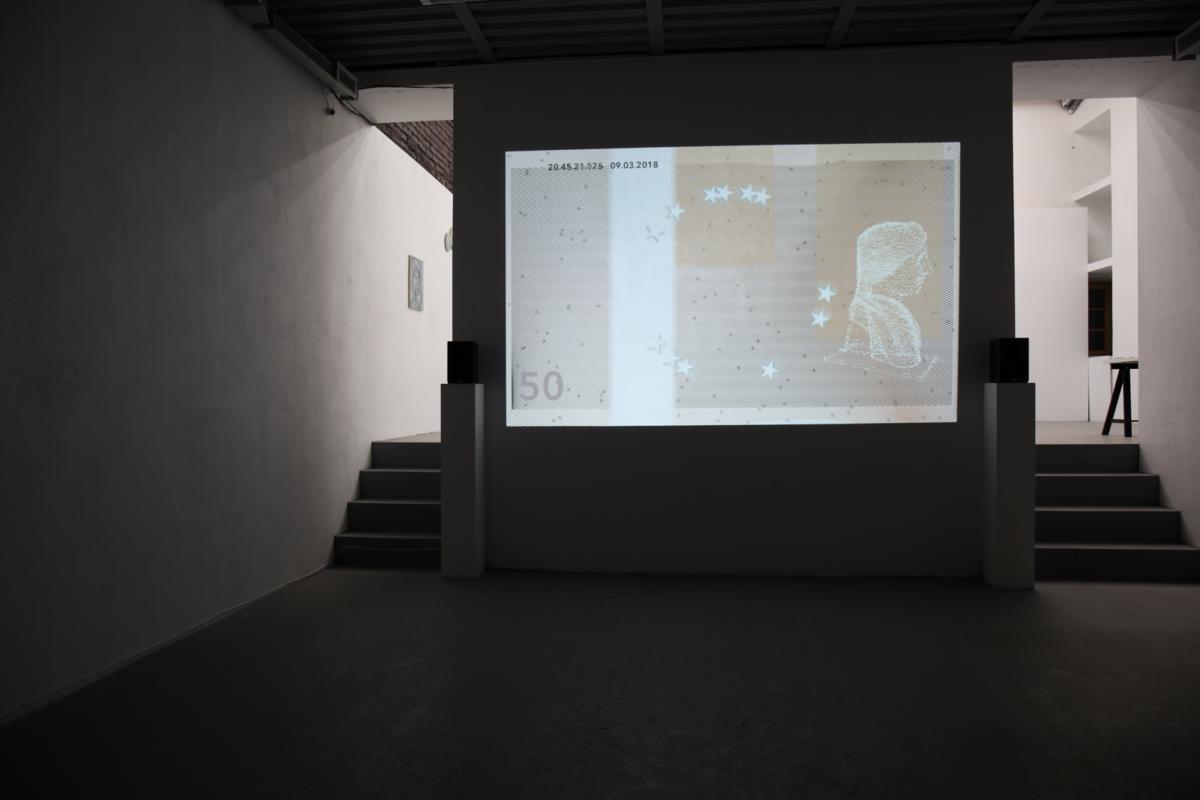 Yelena Popova, who is ‘Visiting Professor at Helsinki Fine Art Academy’ in 2017-18, has enjoyed several prestigious residencies in the last couple of years. She has just returned from Mallorca, where she spent a few weeks at CCA Andratx, one of the largest centers of contemporary art in the Balearic Islands as well as the rest of Europe. Before this, she was for one year „Artist in Residence“ at Girton College, University of Cambridge. Only recently one of her paintings was acquired by the New Hall Art Collection at Murray Edwards College, University of Cambridge, the largest collection of modern and contemporary art by women artists in Europe.