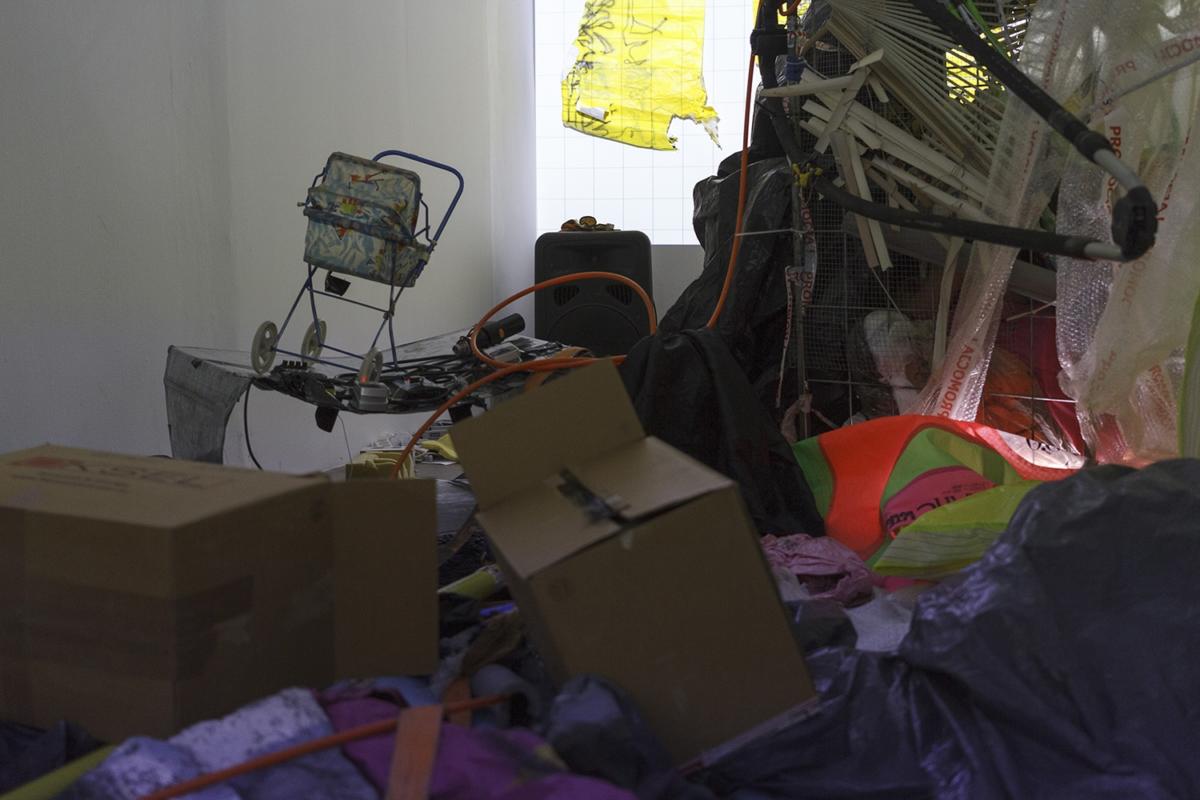 The mutilation of images has a longstanding, albeit, dishonourable place within art history. At a recent exhibition called Theft and Destruction at the Arsenal Gallery in Białystok, the violation of art and the effect it has when it is mutilated, maimed, stolen or otherwise purloined becomes itself a showcase in which to examine the power of images.

The exhibition is scaffolded to two complementary theses on art: iconoclasm and aura. Therein, W.J.T Mitchell’s What do pictures want? (2004) and Bruno Latour and Peter Weibel’s Iconoclash (2002) provide the show with a foundation to investigate the plunderous and destructive elements that have plagued Polish art history since time immemorial.

The theme of theft and destruction is perhaps none more evident than in documentation from a seminal exhibition, Warsaw Accuses, which opened at the National Museum in the Polish capital on May 3rd, 1945. Three months after the liberation of the city that lied in near-total and complete ruin, the exhibition was intended to portray the extent of Nazi savagery. At the Arsenale Gallery, an entire wall is dedicated to video documentation of the Warsaw Accuses exhibition. In the grainy, silent video, we encounter the National Museum shattered in rubble, sacked and demolished. In total, more than 16,000 works of art, artifacts, manuscripts, documents and/or books were looted or ravaged by the foreign occupiers. In what became an exhibition designed to survey the mutilation of a culture completely and utterly decapitated, the video serves as a jump off point in which to consider how destruction manifests in the present. 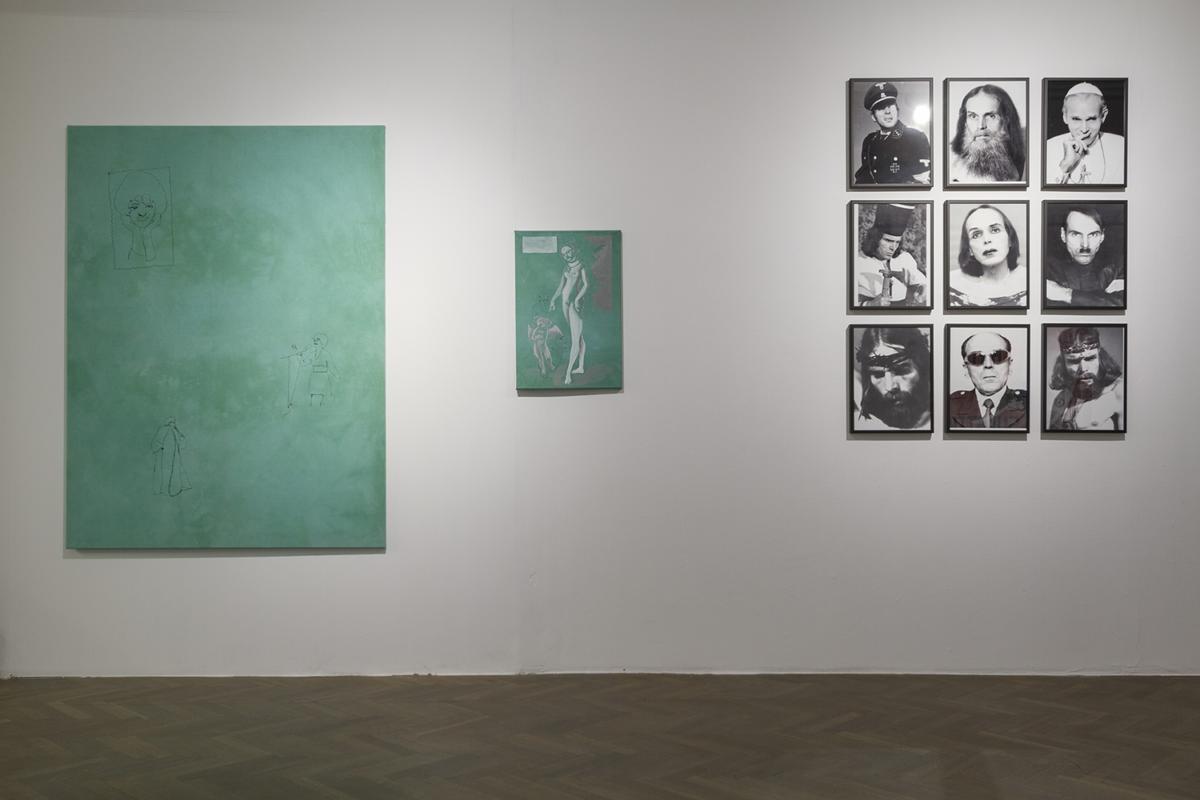 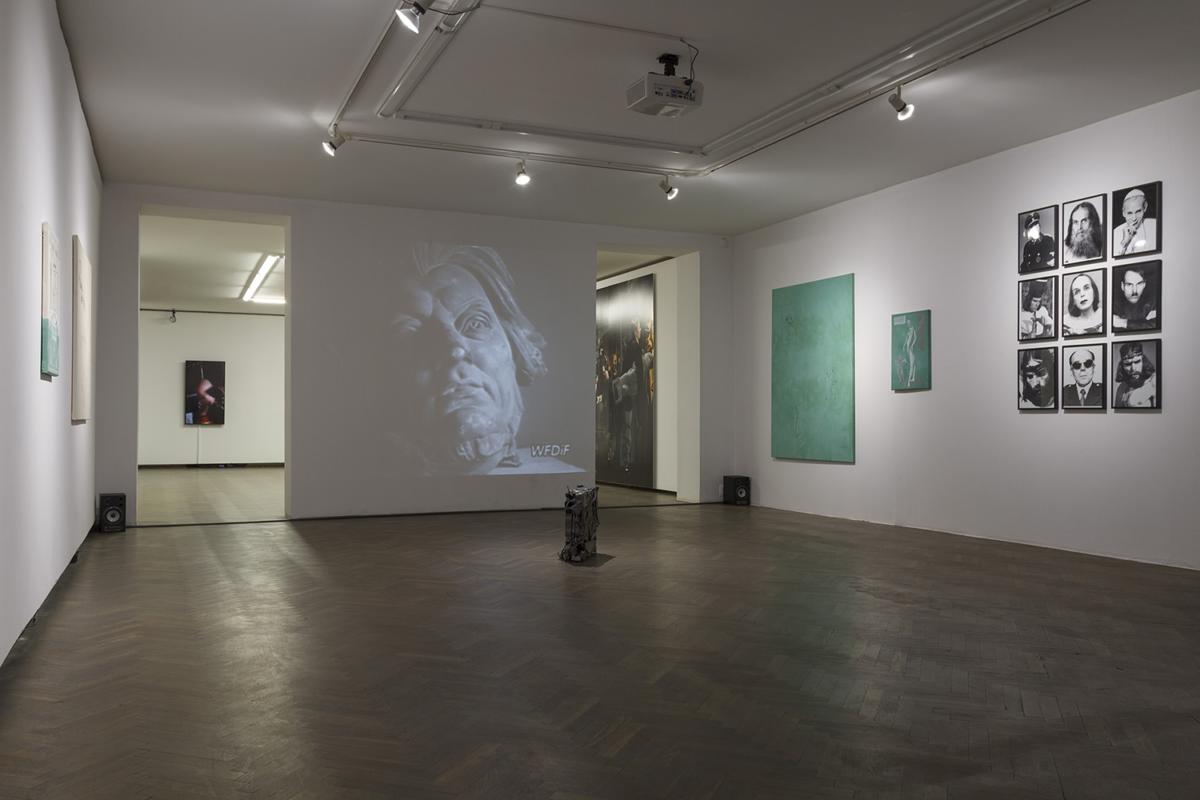 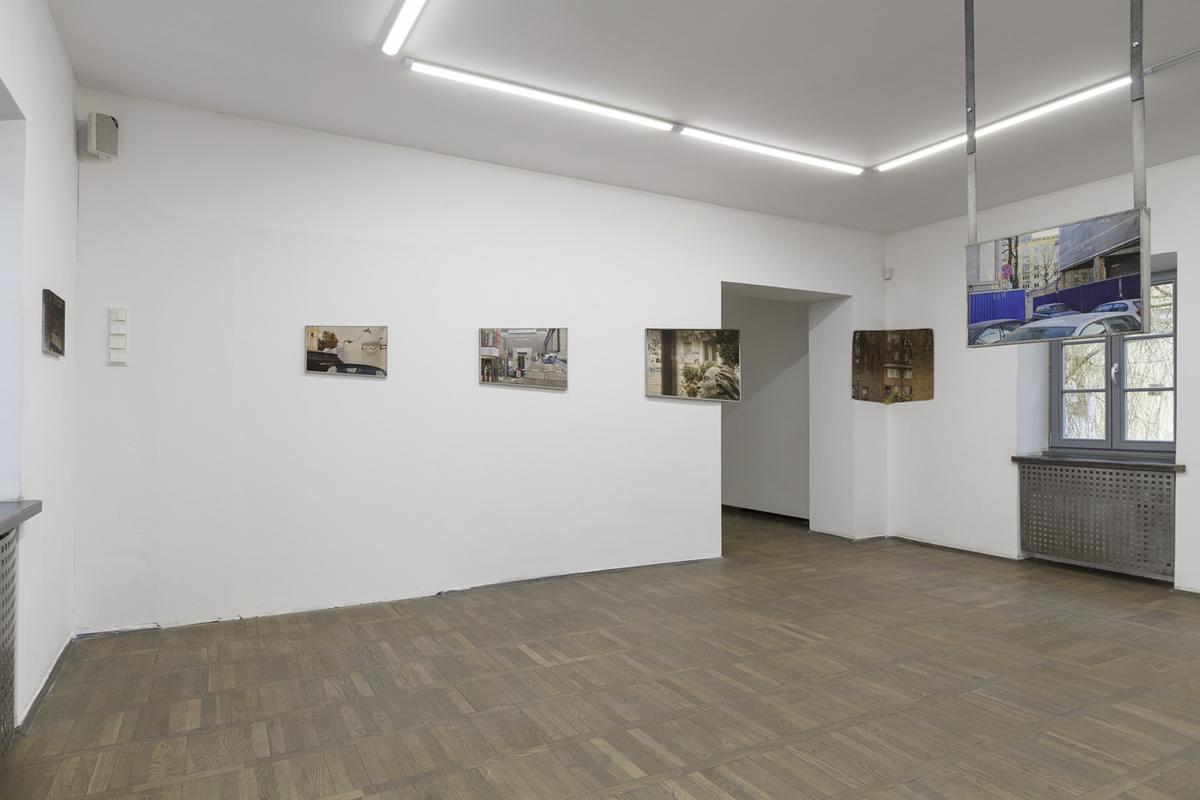 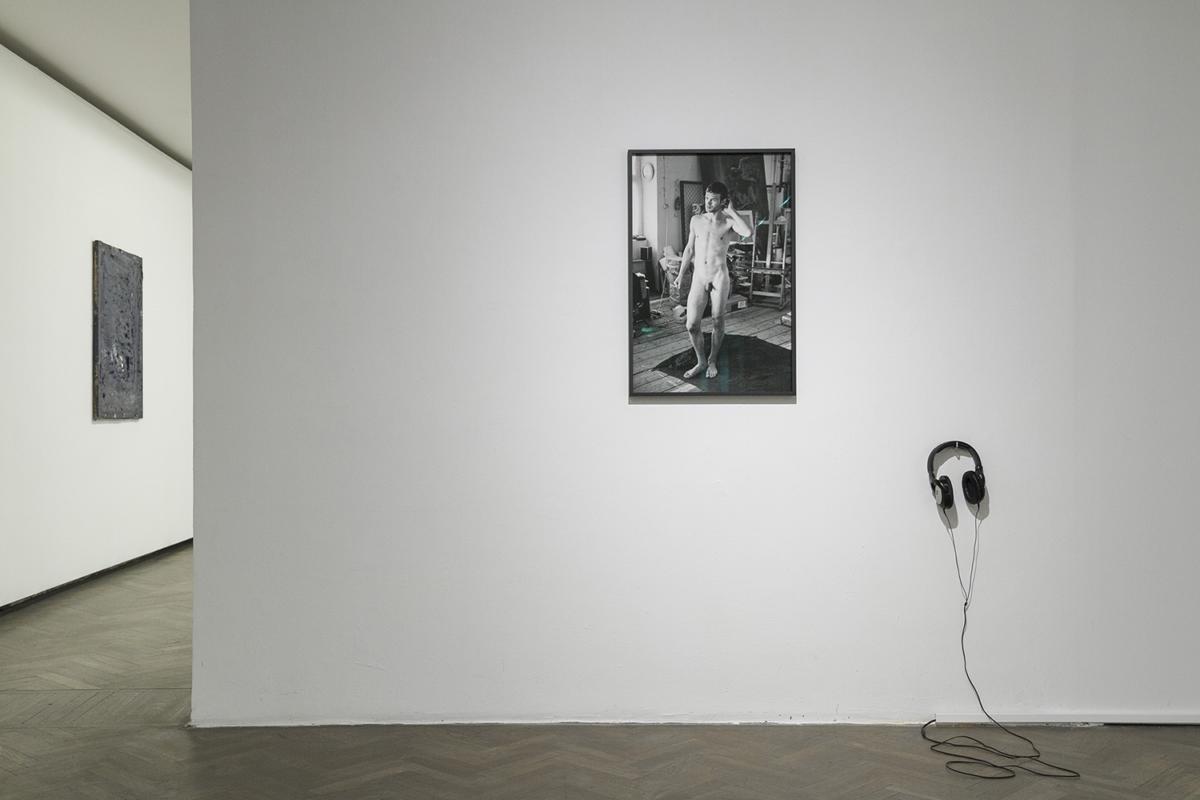 Today, we see a depressingly similar pattern in countries ravaged by war—Iraq, Syria and Yemen—countries that have also had to endure cultural plunder en masse as a result of geopolitical strife and conflict. Just last year, Yemen’s deputy culture minister, Abdulhadi al-Azazi, asked for international help to repatriate some of the country’s ancient limestone carvings, gilded Torah scrolls, bejeweled Islamic daggers, and even a 2,500-year-old mummy—all of which remain missing amid the charred debris and shattered display cases of the country’s national museum.[1]

Referencing the aura that images take on beyond their physical manifestation, according to image theorist Hans Belting, “only images lifted by an aura of the sacred […] can take on real power.”[2] Though Belting is mostly concerned with Byzantine icons, the sentiment that images have a lasting power is a sentiment not to be ignored in secular contexts either. Roland Barthes infamous “punctum” deals in fact with the power or aura of images in secular contexts. According to Barthes, there are two planes of the image: the first he calls “stadium,” which says is “a kind of education” capable of teaching about a particular style of dress, or the look of a city street. The other plane of the image, according to Barthes, he calls the “punctum.” Only here, Barthes describes the penetrating influence and the spectral conjuring of the image akin to aesthetic vertigo. He tests his theory of the punctum by attempting to rip and tear apart a photograph of his deceased mother, which, in the end, he is unable to do. He describes this vertigo as the “punctum,” the power of the image to symbolically represent something more personal, intrinsic even.[3] Yet what Barthes discovers is no less is the power of images as the je ne sais quoi they have, a sentiment touched on in the exhibition too. Similarly, curator Michał Łukaszuk acknowledges how “harnessing images may arise from the painful discovery of the absolute disembodiment of alienated authority.”[4] What he means by alienated authority seems intended to refer to the corporeal treatment that images have, what he calls elsewhere the “power of ritual cleansing.” This often occurs due to intentional or unintentional destruction. In the exhibition, we encounter a 2013 fire that consumed art studios in Warsaw’s Praga district, completely obliterating artist Karol Radziszewski’s studio. In the exhibition, an ancillary sound piece is installed of Radziszewski describing the brutal destruction. Another fire, this one from 2017, which engulfed the Czułość gallery in the Old Town of Warsaw, references works by Janek Zamoyski that were saved. Evacuated along with the gallery; years later, they find an alternative home in the Arsenal Gallery in Białystok.

What do these tales of theft and destruction mean? According to Łukaszuk, they seem to gesture towards a conceptual understanding of art as paradoxically liberated from “the sacral idea of an artwork aura.” In his fantastic and well-research curatorial essay, Łukaszuk clearly does his homework, referencing everything from Gustav Metzger’s Auto-Destructive Art manifesto (1959) through to Jean Tinguely’s Homage to New York: A self-constructing and self-destroying work of art (1960), works that seem to reference Janek Simon’s Shredder (2005), which printed and shredded documents from the Polish parliament installed within the gallery’s staircase. 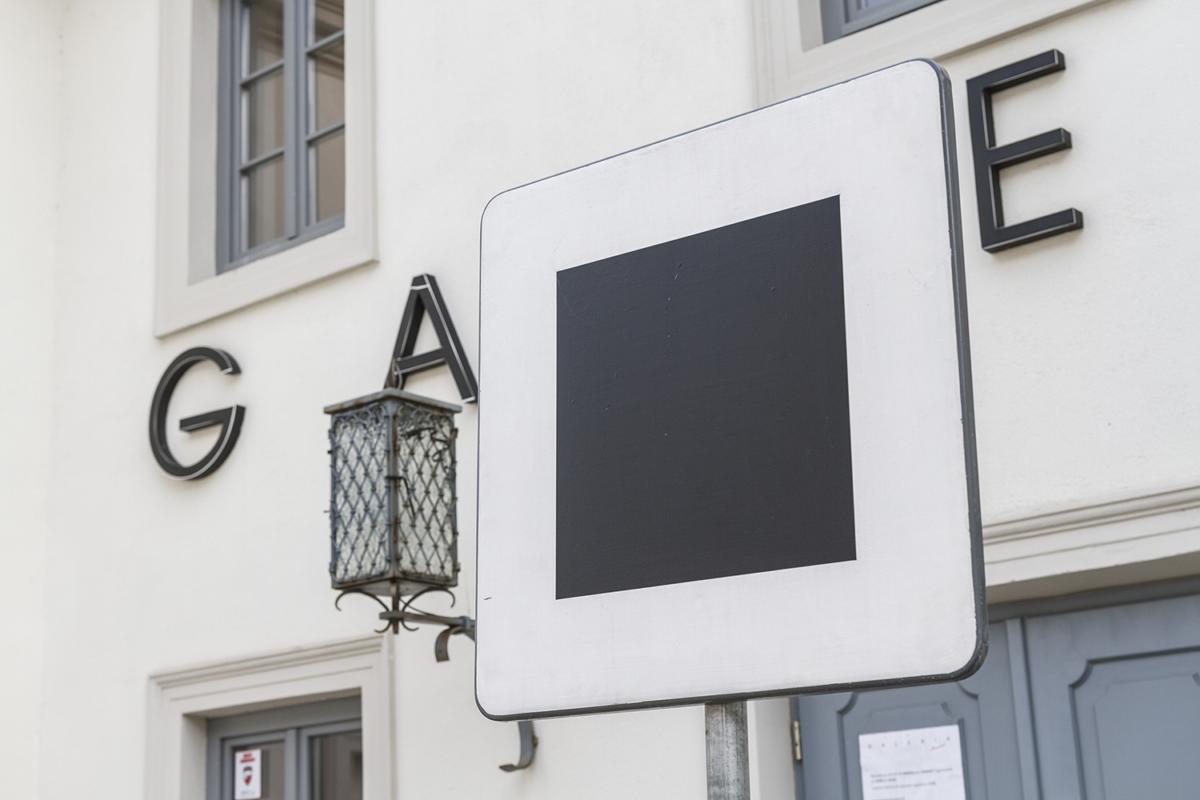 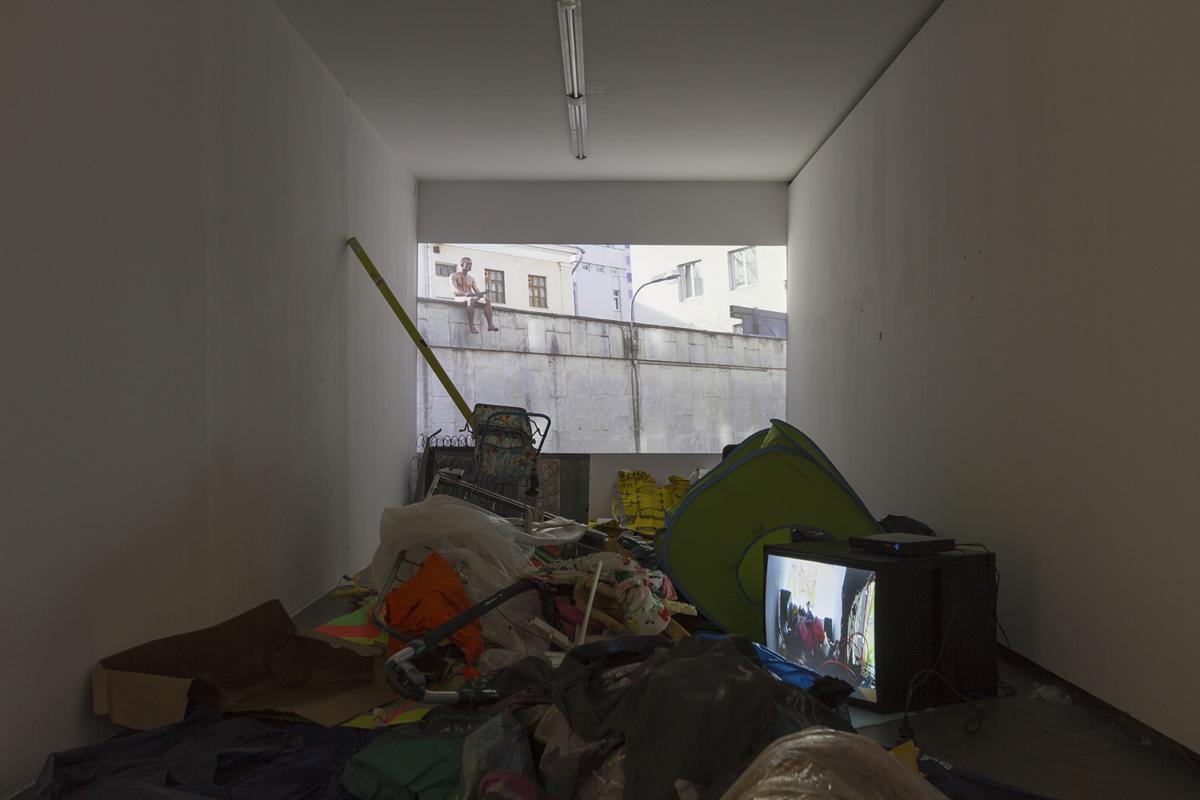 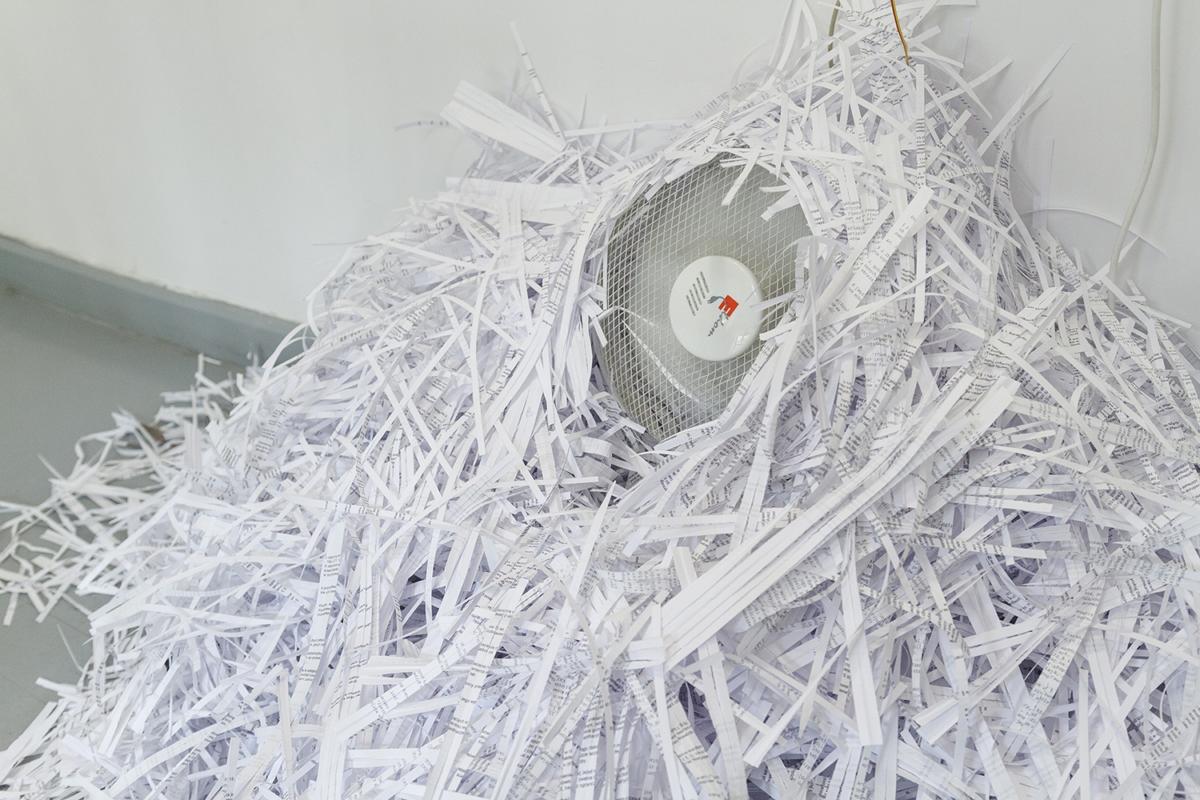 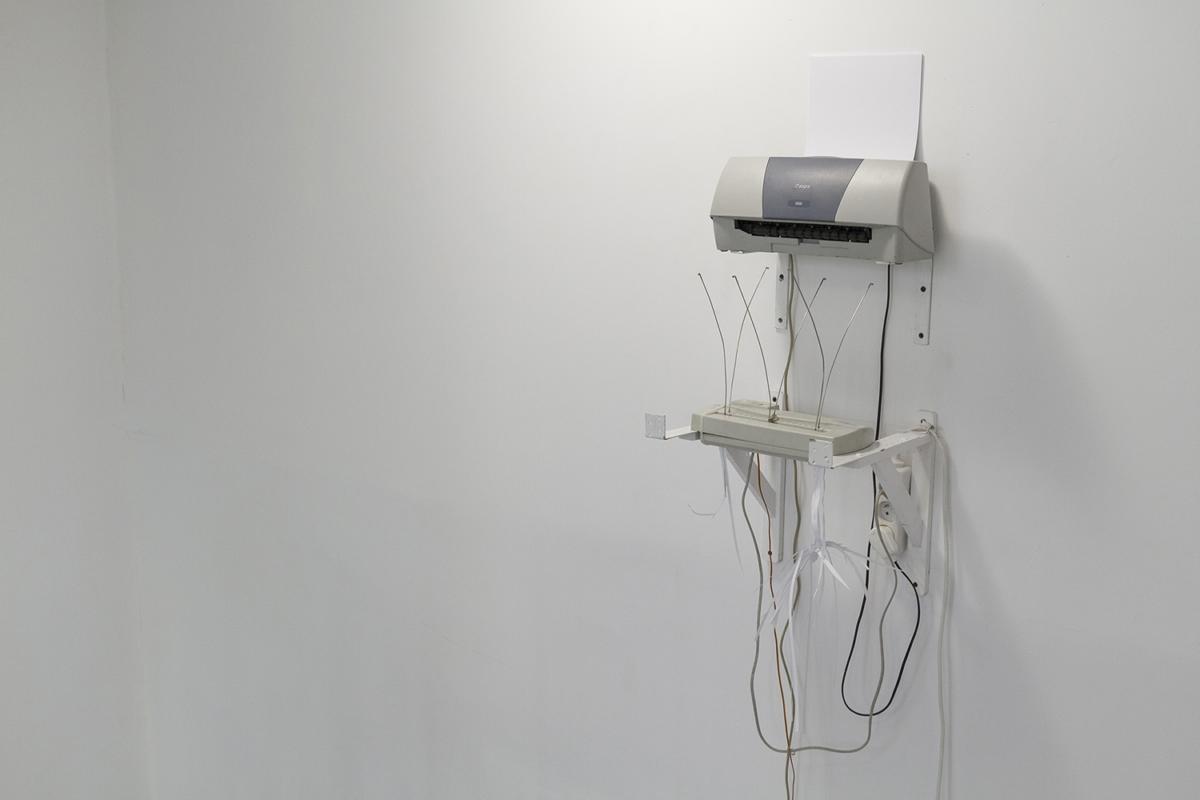 Crucially, the exhibition also platforms strands of performance and body art that relate to the theme of destruction in its physical sense, including Ewa Partum’s Hommage to Kazimir Malevich (2004), alongside two videos of the controversial and iconic Russian performance artist, Petr Pavlensky—Segration (2014) and Carcass (2013)—both notable as documents of state violence as they accrue on the human body. Art being the brutal interface against oppressive state interference, the ability of artists to curtail inequality has always been the raison d’être of socially engaged bodies. Here one might also reference the nature of ORLAN’s surgical experiments on herself, the only difference being a performative deconstruction. Not destructive in the decapitating sense, but rather as a kind of liberating, trans-queer state of nonlinear becoming.

In any case, the theme of performance and the body also manifested in the exhibition itself. Notable in this regard is a work by the young Polish artist, painter, performer and experimental musician, Jakub Gliński. During the opening of the exhibition, Gliński’s site-specific performance I will come back home in urine (2020) saw the artist ravage a room of the gallery leaving it in a ruinous state. Angsty and tumultous, Gliński’s gesture towards the body language of performance felt palpable: a body without organs, expressive of a state of kinesis whereby the work of art retains its aura only upon the very act of being destroyed. 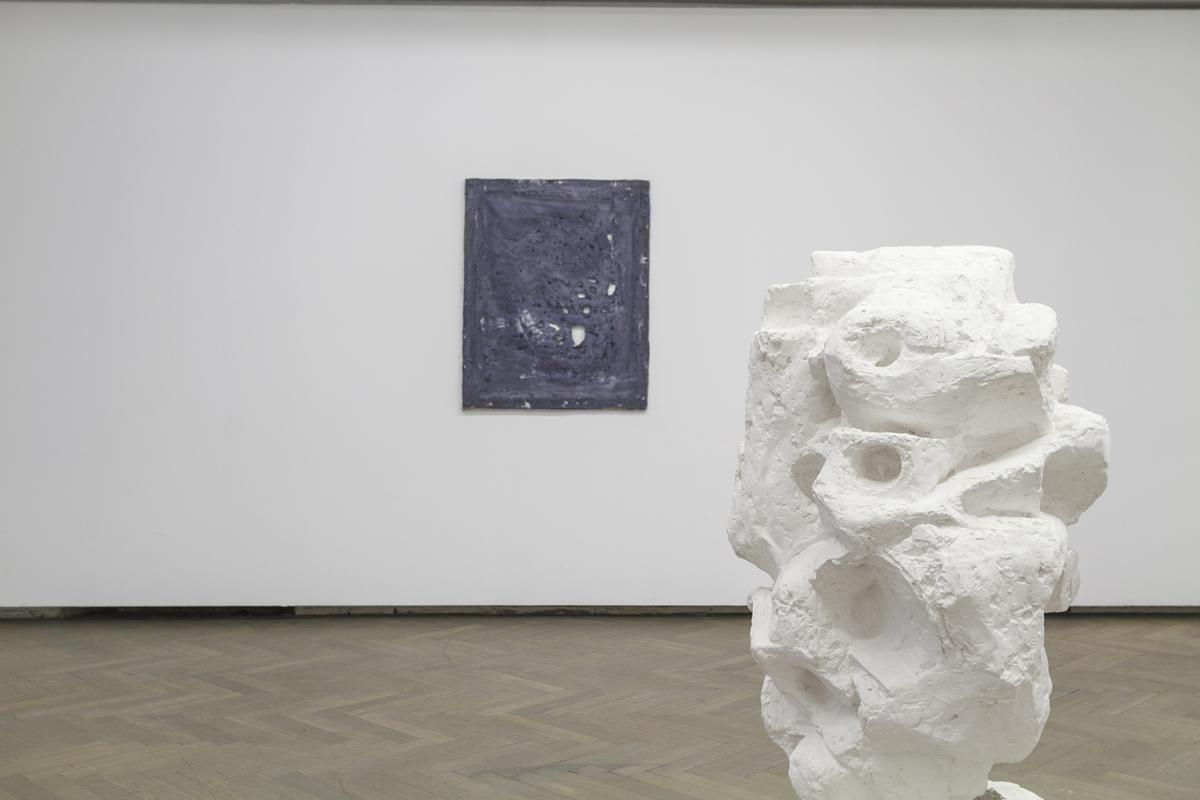 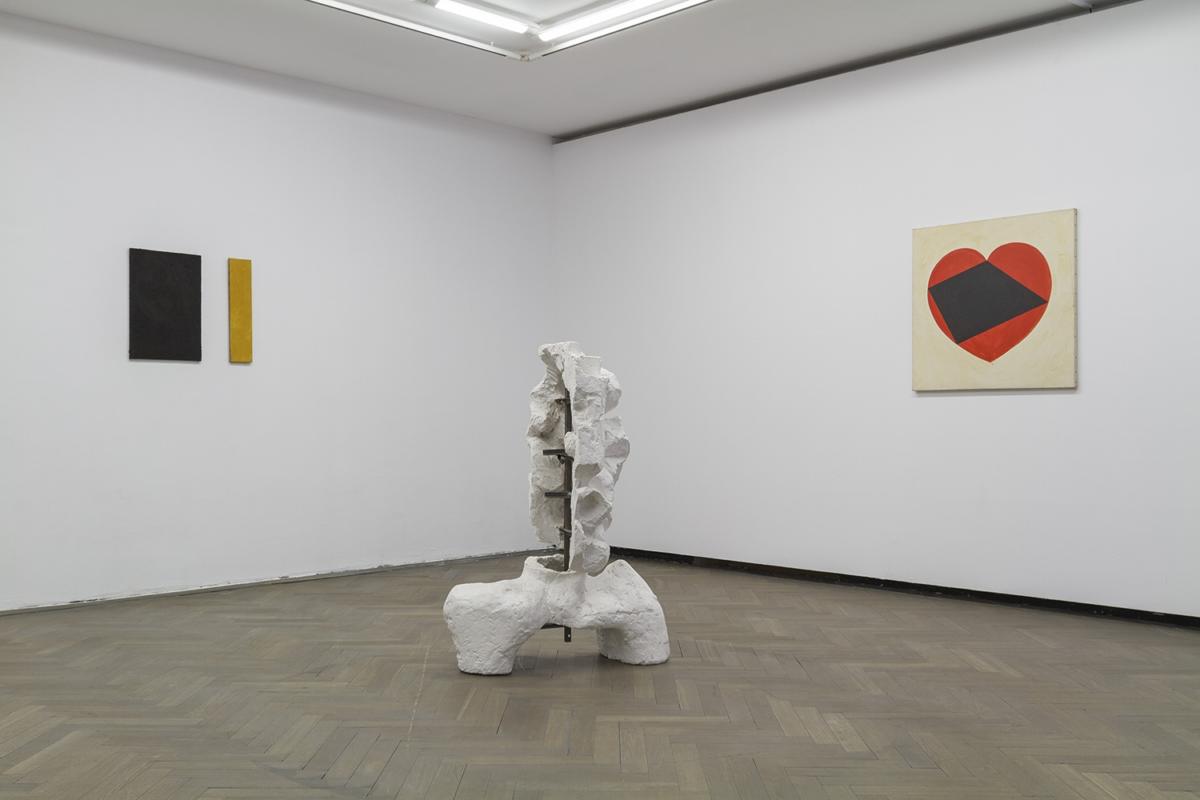 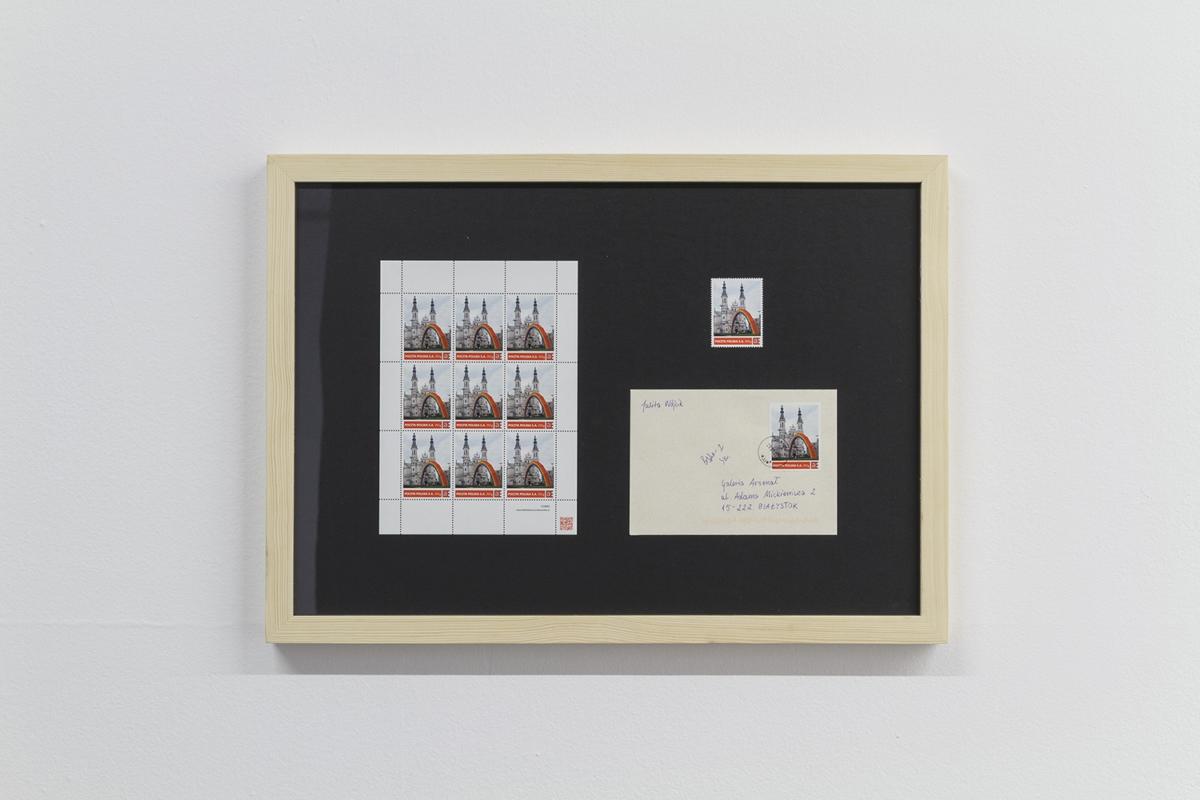 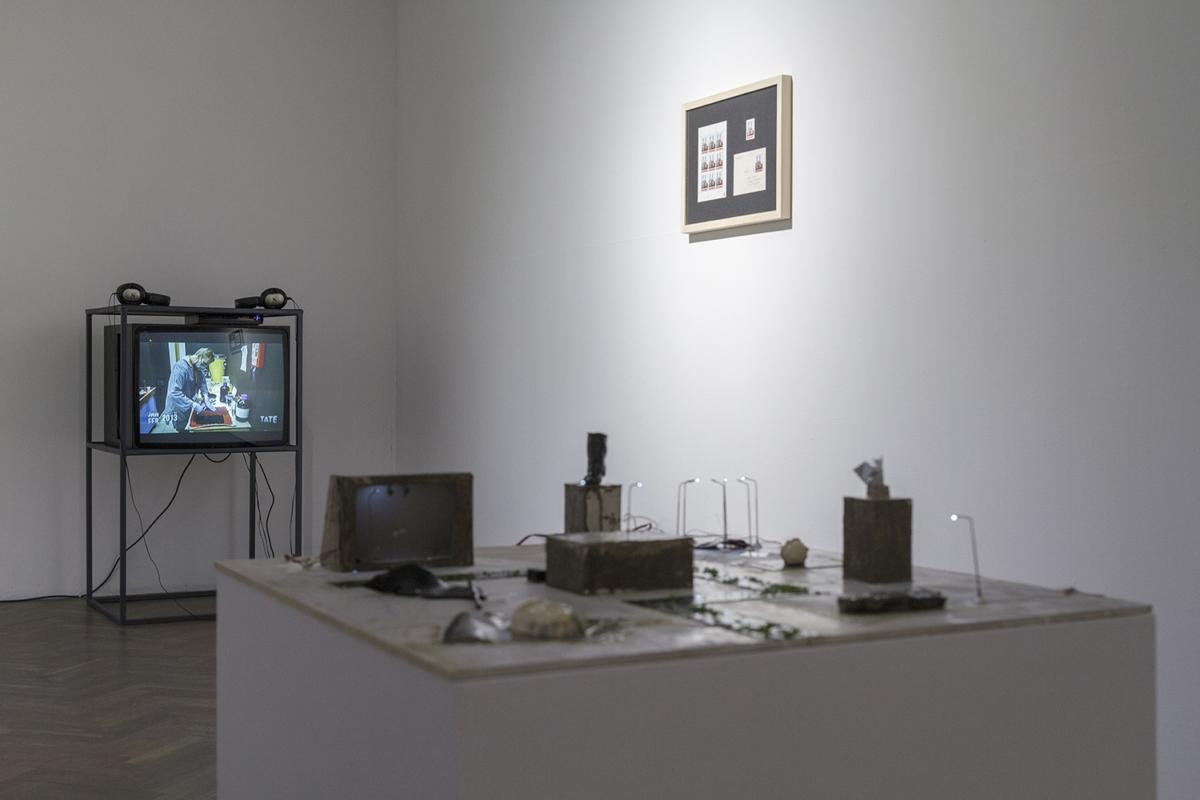 [2] Hans Belting, Likeness and Presence: A History of the Image Before the Era of Art. University of Chicago Press, 1994, p. 8.