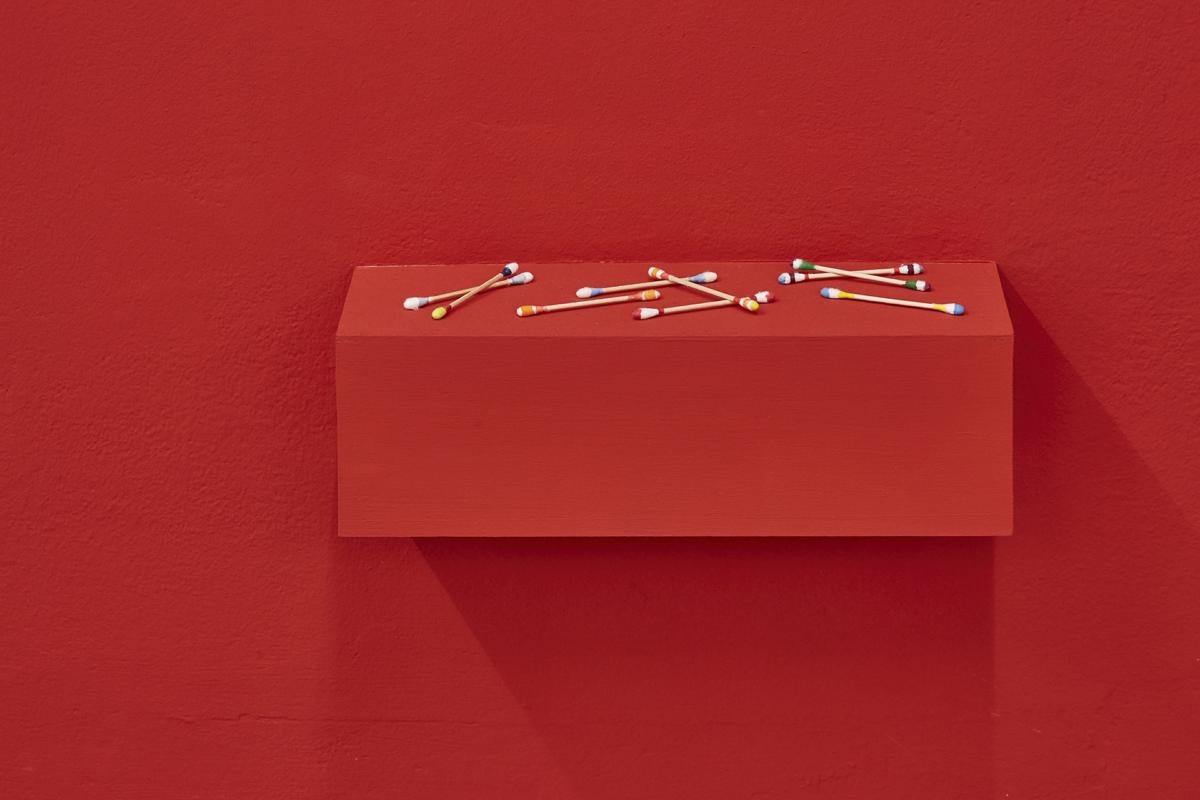 The Sea Monster, The Bear, curated by Àngels Miralda imagines our process of thinking developed on a historical level as an analogy for established curatorial methods. Taking Pier Paolo Pasolini’s The Trilogy of Life (1971–74) as a methodology for curatorial compilation, the exhibition aims to collect a series of stories expressed in images and objects with bridges extending to individual narratives. Pasolini’s trilogy uses anthology of tales by several authors to create a feeling through the aesthetics of storytelling. In the same way that most compilations of regional lore are collected and passed on, each generation translates these histories into their dynamics. From the oral tradition of the Arabian Nights (c. 800) to Geoffrey Chaucer’s first writing in native English tongue in The Canterbury Tales (c. 1400) and Giovanni Boccaccio’s The Decameron (c. 1353), the compilation becomes a meta-collection mirroring the process of each book’s structure of a plurality of voices.

The fragmentary structure of these tales based on oral histories is a rebel in its character. Popular culture based on the folk traditions of fairy-tales and local mythologies serve various purposes from moralization to the construction of shared cultural values, and in their cacophonous worldliness, emerge from an unrecognised human unconscious. They serve as a veiled criticism of aristocratic and religious elites or pass down wisdom millennia in the making. This exhibition puts forward plurality and narrative as well as non-linear history as a powerful method of criticism and historical revisionism. The Sea Monster, The Bear, is a compilation in which several cases bring forth a complete viewpoint, and albeit fragmentary, the movement from one to the other is filled with the significant void. 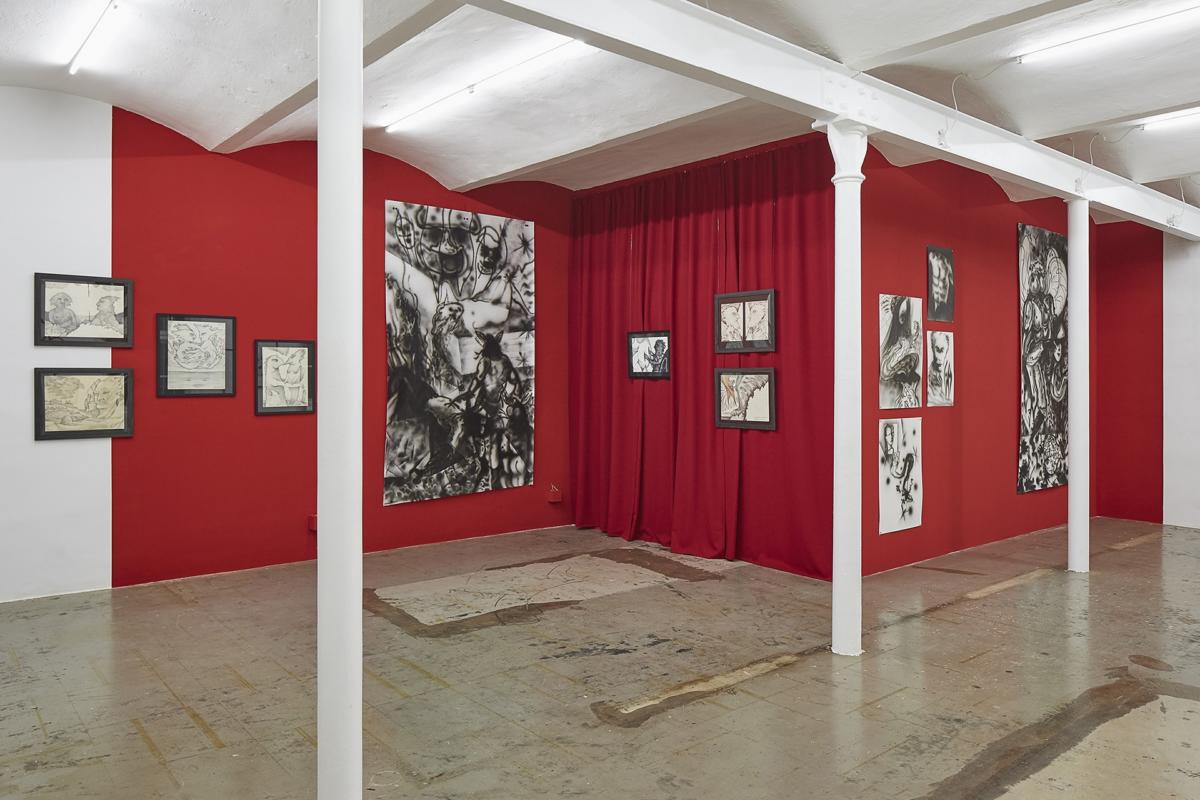 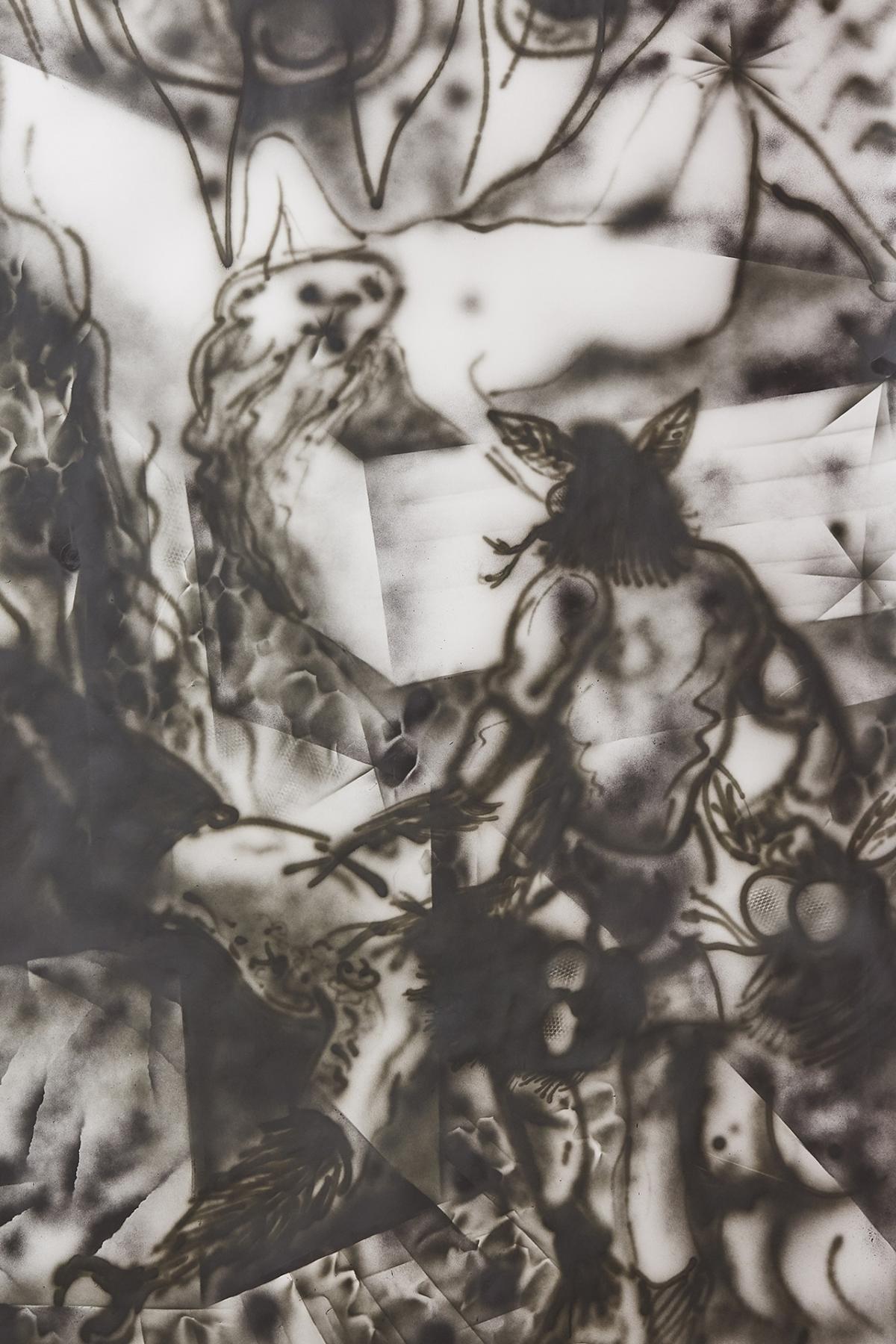 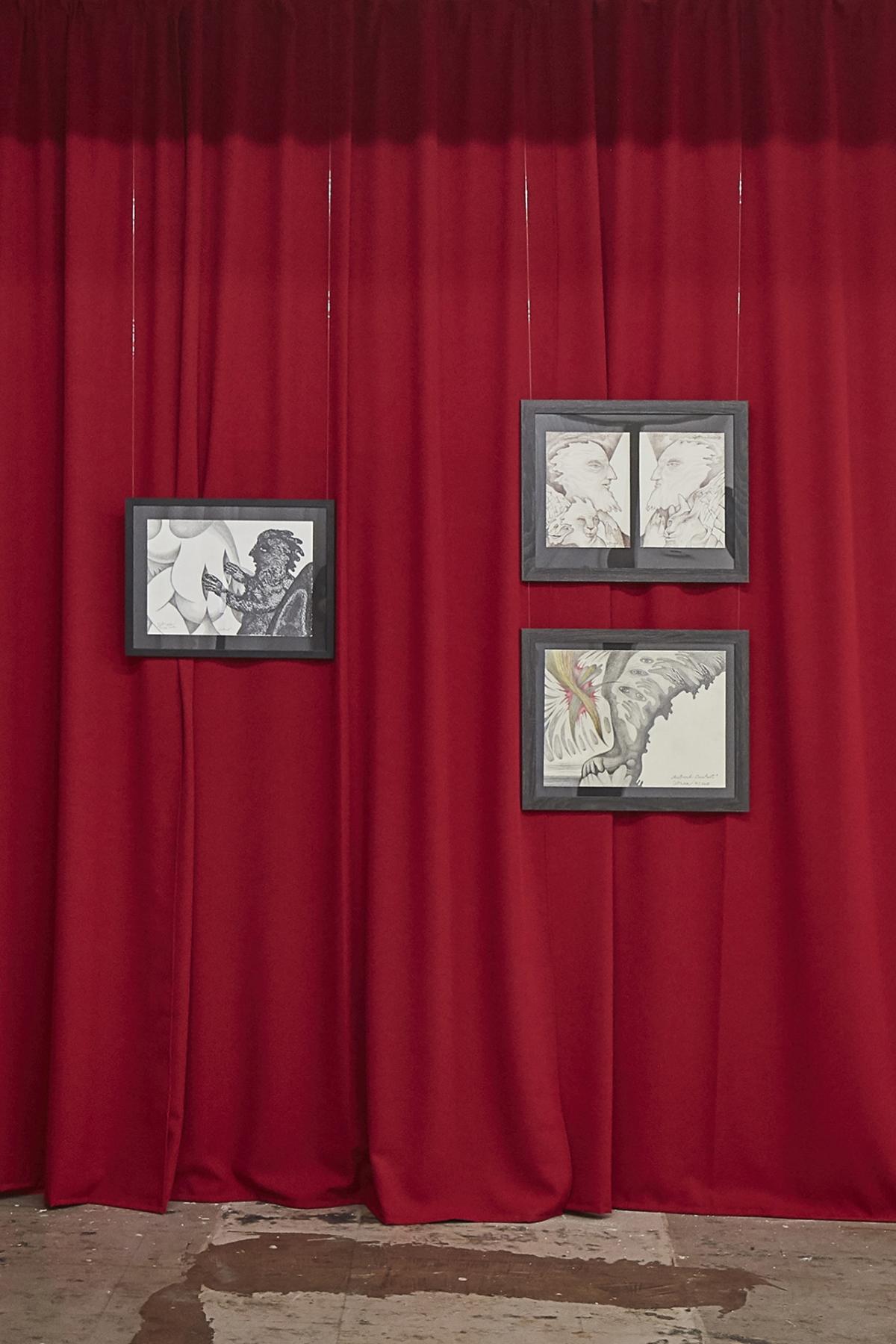 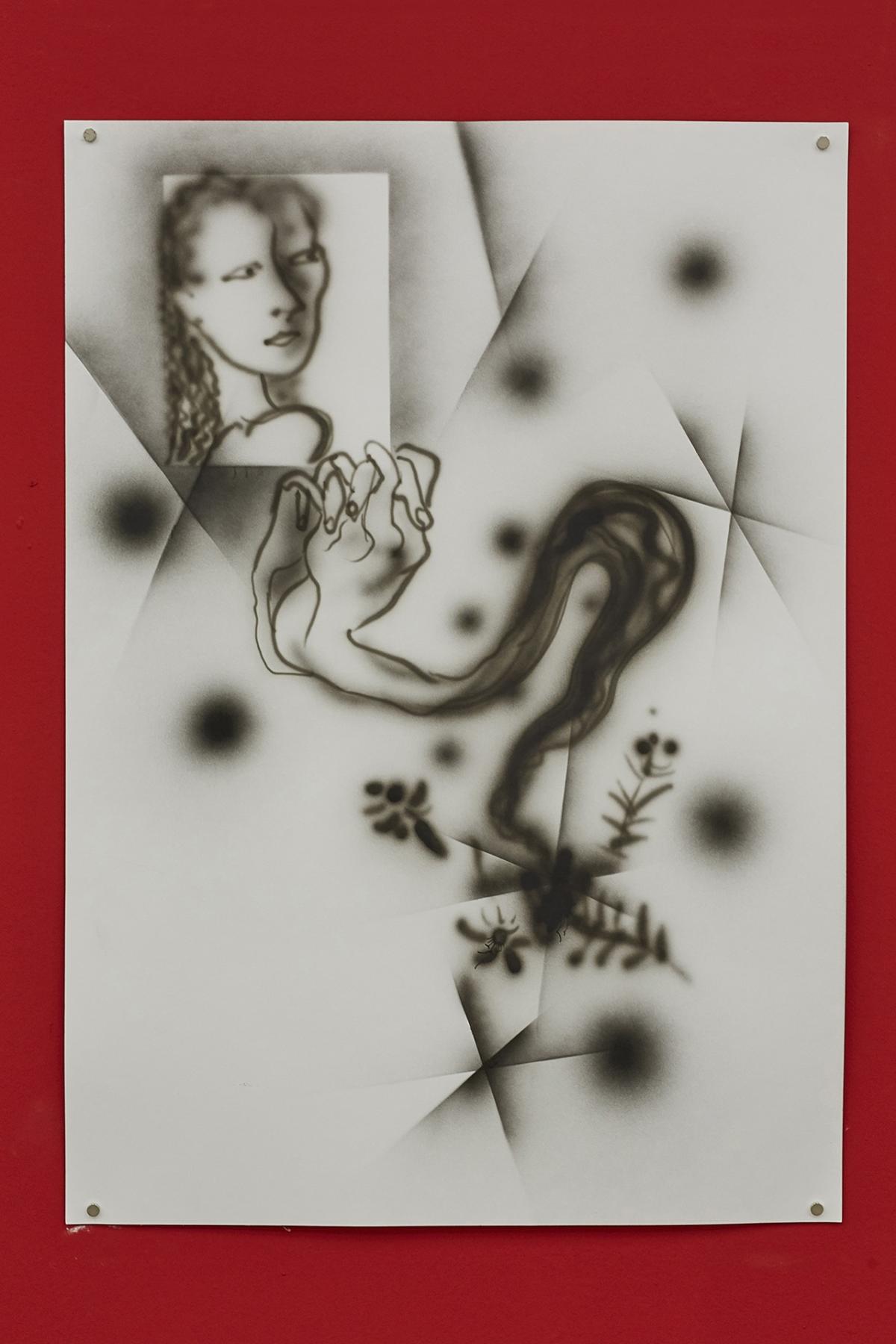 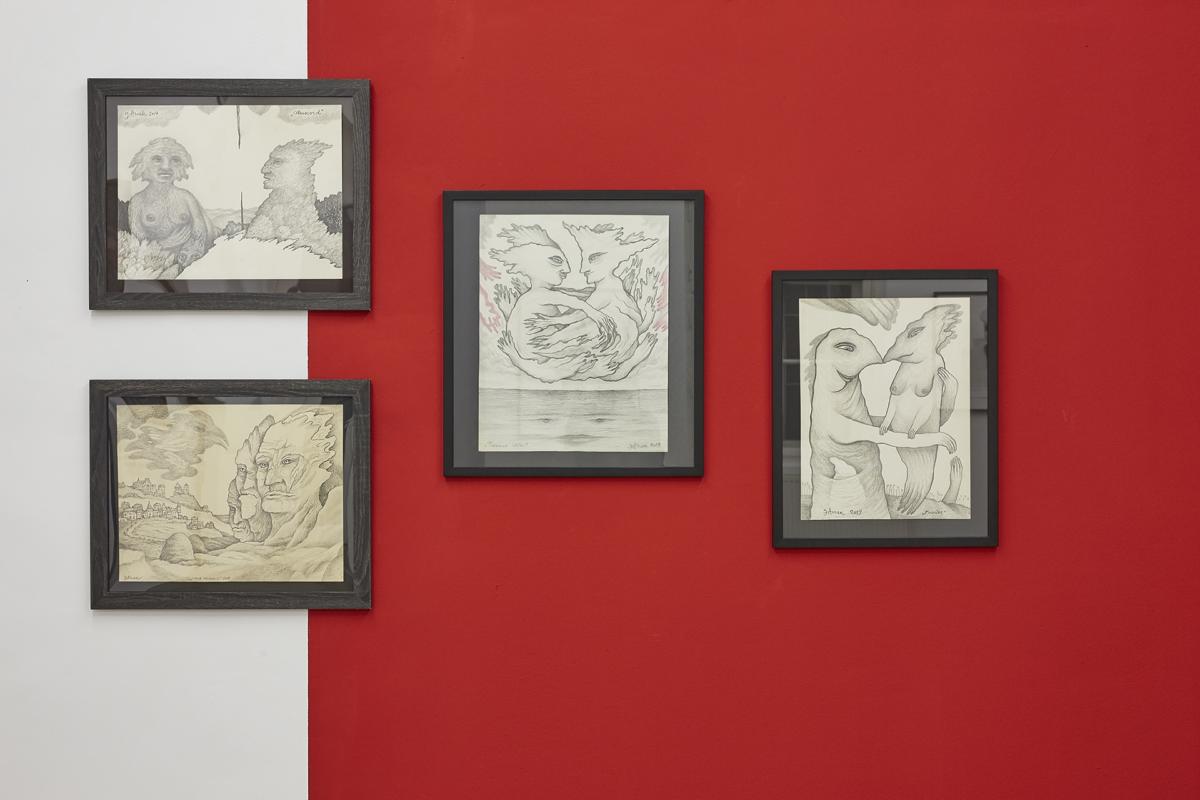 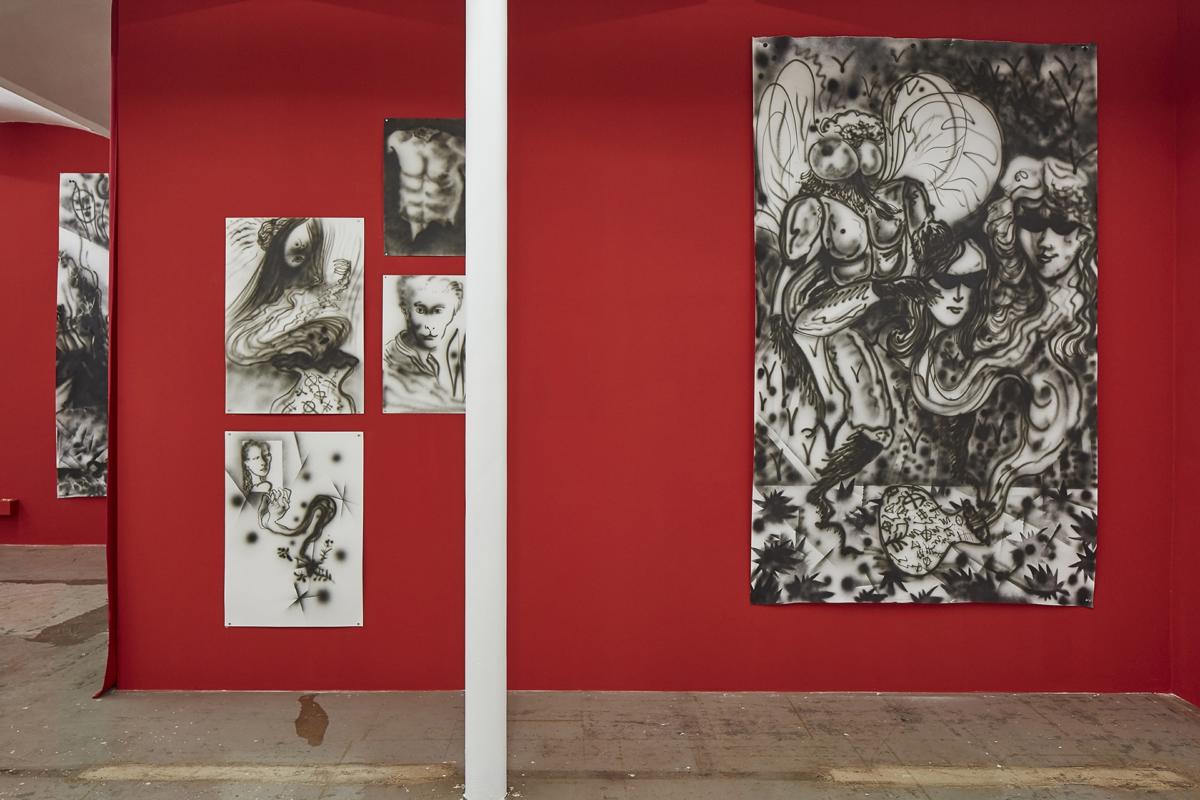 The work of Jüri Arrak serves as an anchor to the exhibition. One of Estonia’s most beloved artists, Arrak’s work is symbolic of the power of art in times of repression and censorship. Beginning his work during the 1960s in the Estonian Soviet Socialist Republic, the themes of local mythology and folkloric tales were considered a radical subject matter that opposed the mythos of the ‘New Soviet person’. Taking advantage of a moment of relative freedom after the most hard-line moments of ‘Socialist Realism’, Arrak and his colleagues in Tallinn started to push the boundaries against repression and the formulaic and linear structure of ‘Agitprop’. Based on traditional characters and stories, the images can be appreciated by anyone for their artistic integrity in illustration and painting. At the same time, the key to their significance lies with the audience’s knowledge of the mythic stories behind them. Arrak’s work is significant in its ability to respond to a regional crisis in art at the same time as referencing the global trends in development during the 1960s and ’70s. With the release of Pasolini’s The Decameron in 1971, the return to folkloric and mythic concepts spanned Europe. It can be inserted into the long history of resistance against unfettered modernity and the industrialisation process that favoured the linear time of progress and production.

The universality of storytelling and the fragmentary adds to the non-linear exhibition. Nadia Barkate explores the linguistic elements of illustration and painting through sketches based on stream-of-consciousness as a meter for personal experience. With references to surrealism both in art and writing, folkloric elements, Greek mythology, and regional stories mix with hybrid creatures that might as well be from science-fiction as from childhood fairy-tales. Vytenis Burokas uses painting and writing to investigate how history manifests itself in our daily existence. After writing the story of a fictional artist living in historical Lithuania, he embodies the character to create a body of work which broke the taboos of his era and his secret artistic society “the order of the spur.” Dotted with religious and historical elements, the fiction itself serves as a human story applicable to any era. Visible in the space are Beth Collar’s laboriously produced white clay sculptures of pelvises on modern barstools. These sculptures have evolved from a more extensive installation commissioned for Dilston Grove in London, a space that occupies a deconsecrated church. They reference the work of the little-known Italian sculptor Niccolò dell’Arca and his bizarre terra-cotta contribution to a church in Bologna, recognisable by his extreme characterisation of female hysteria. In Collar’s works, the psyche and the body are intertwining through layers of non-linear and pan-historical narratives. 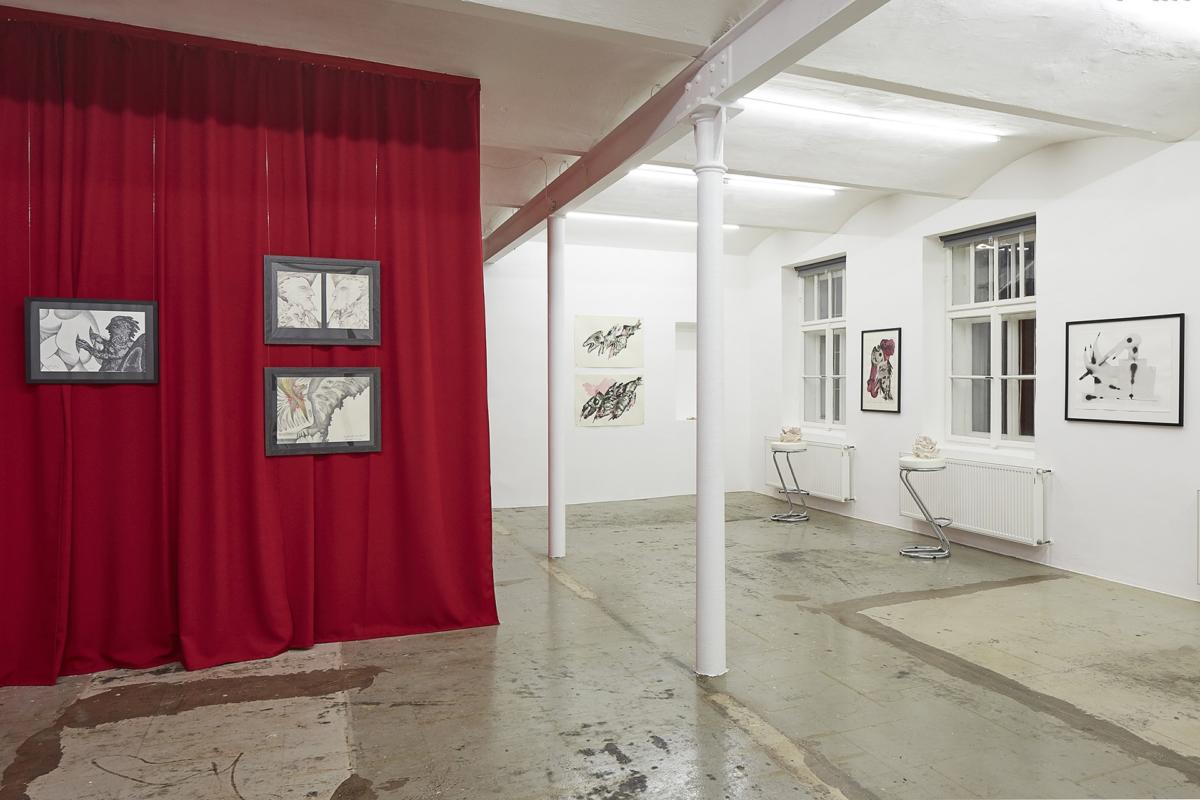 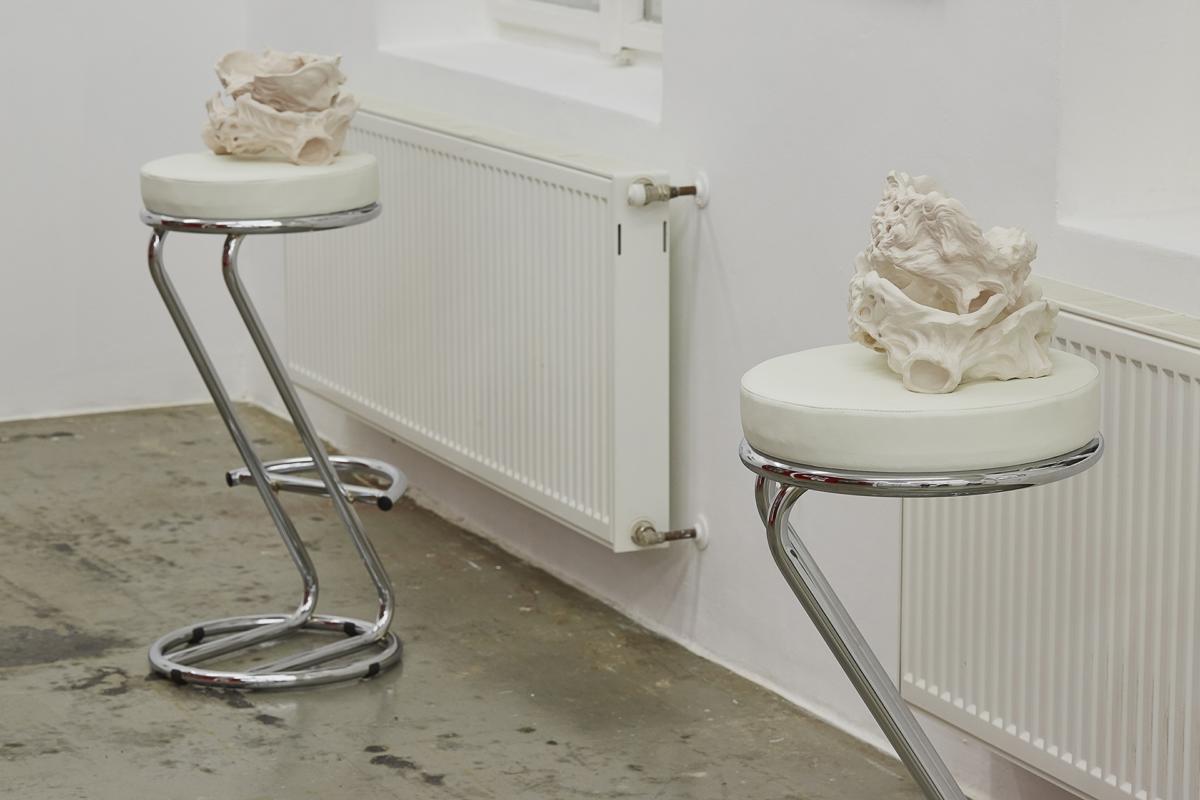 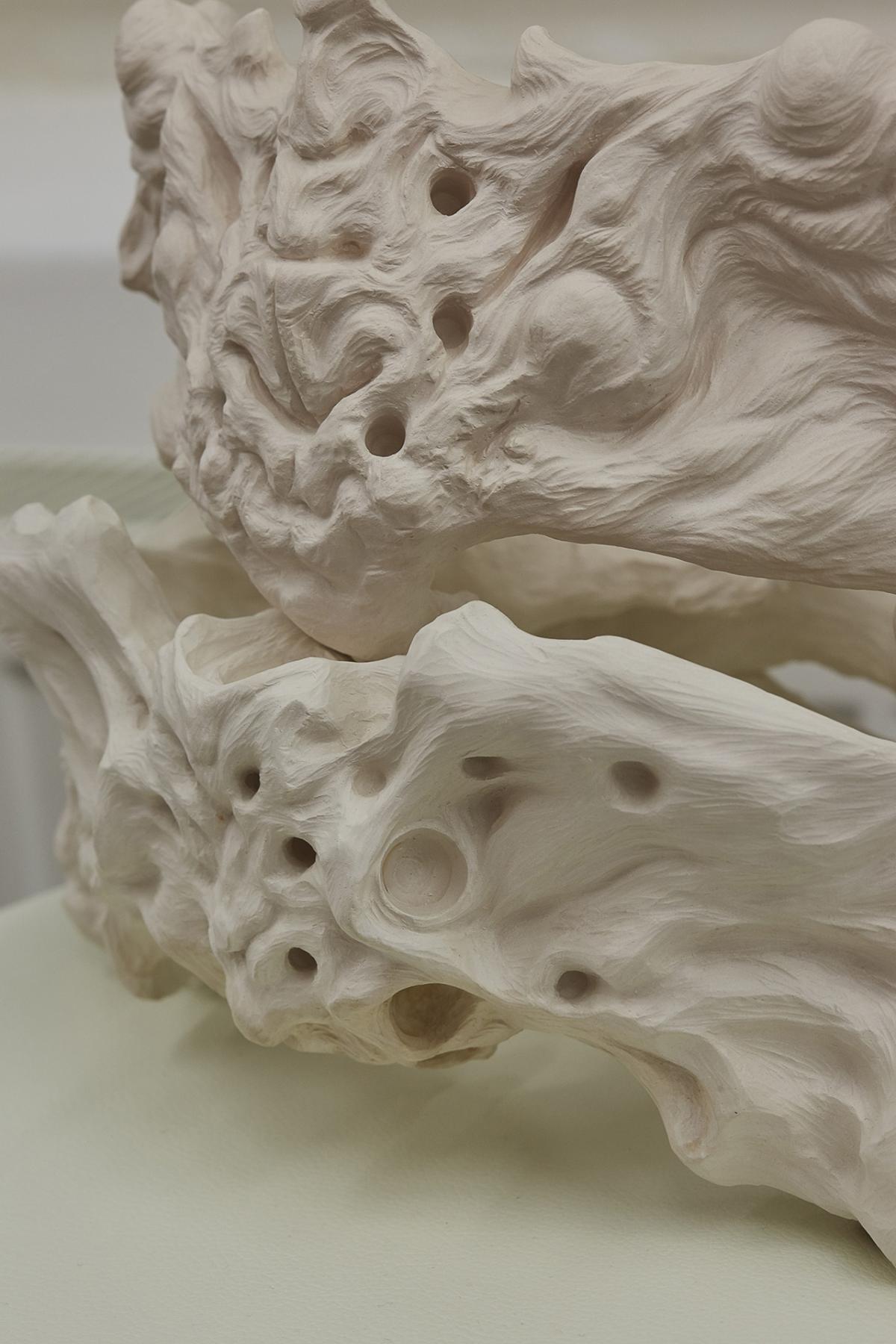 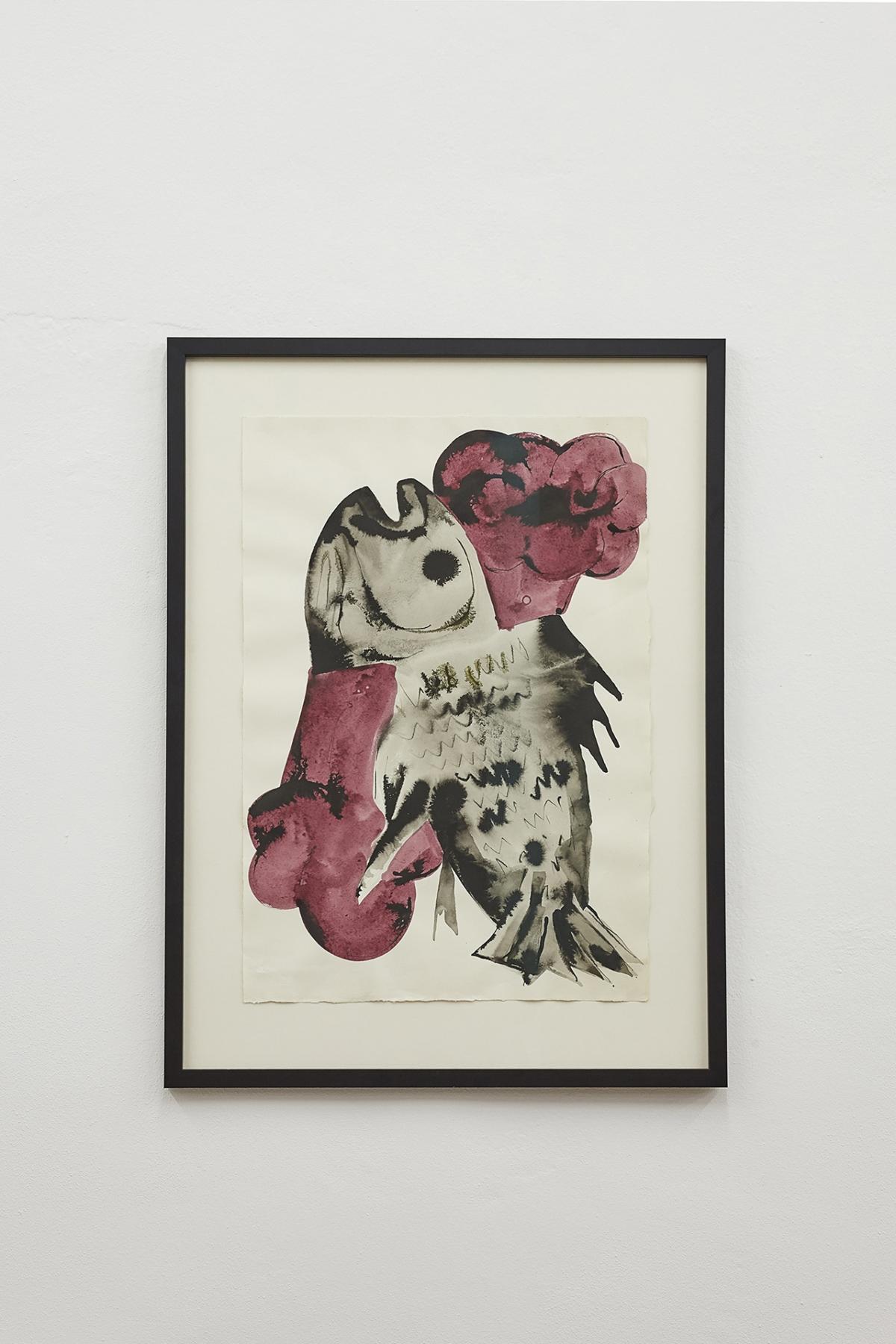 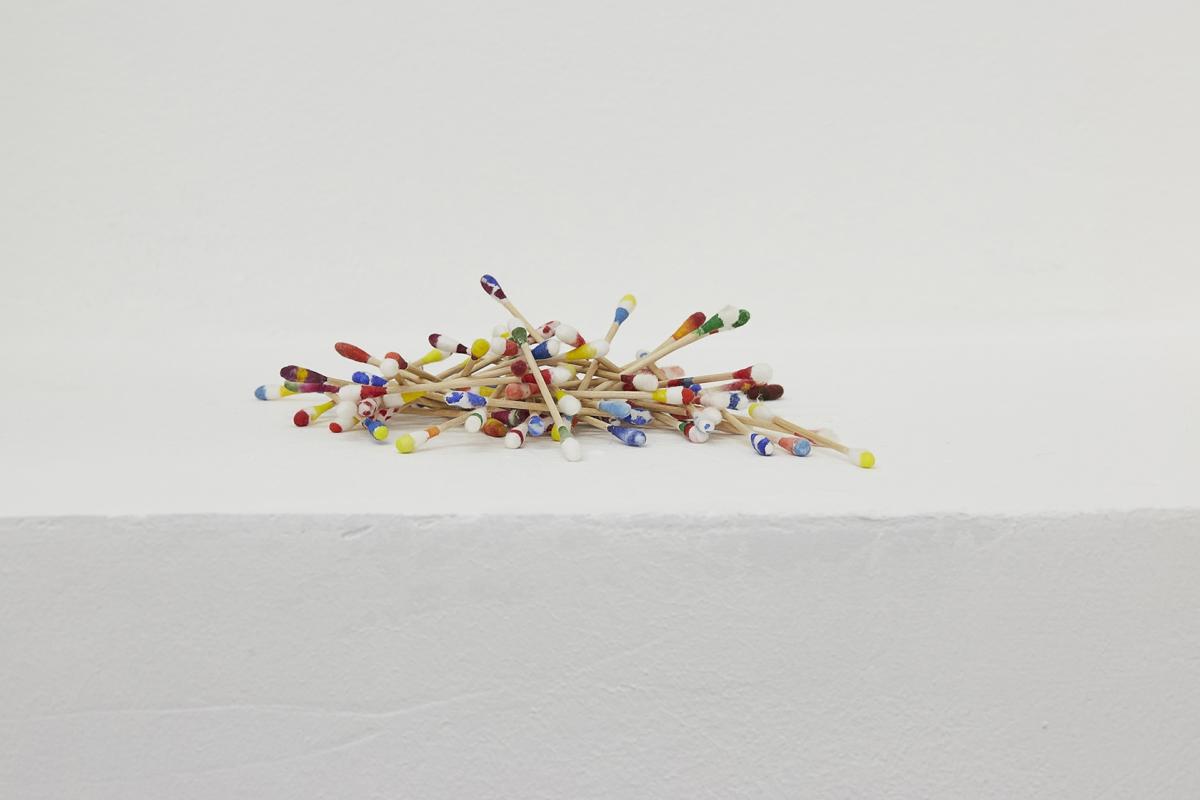 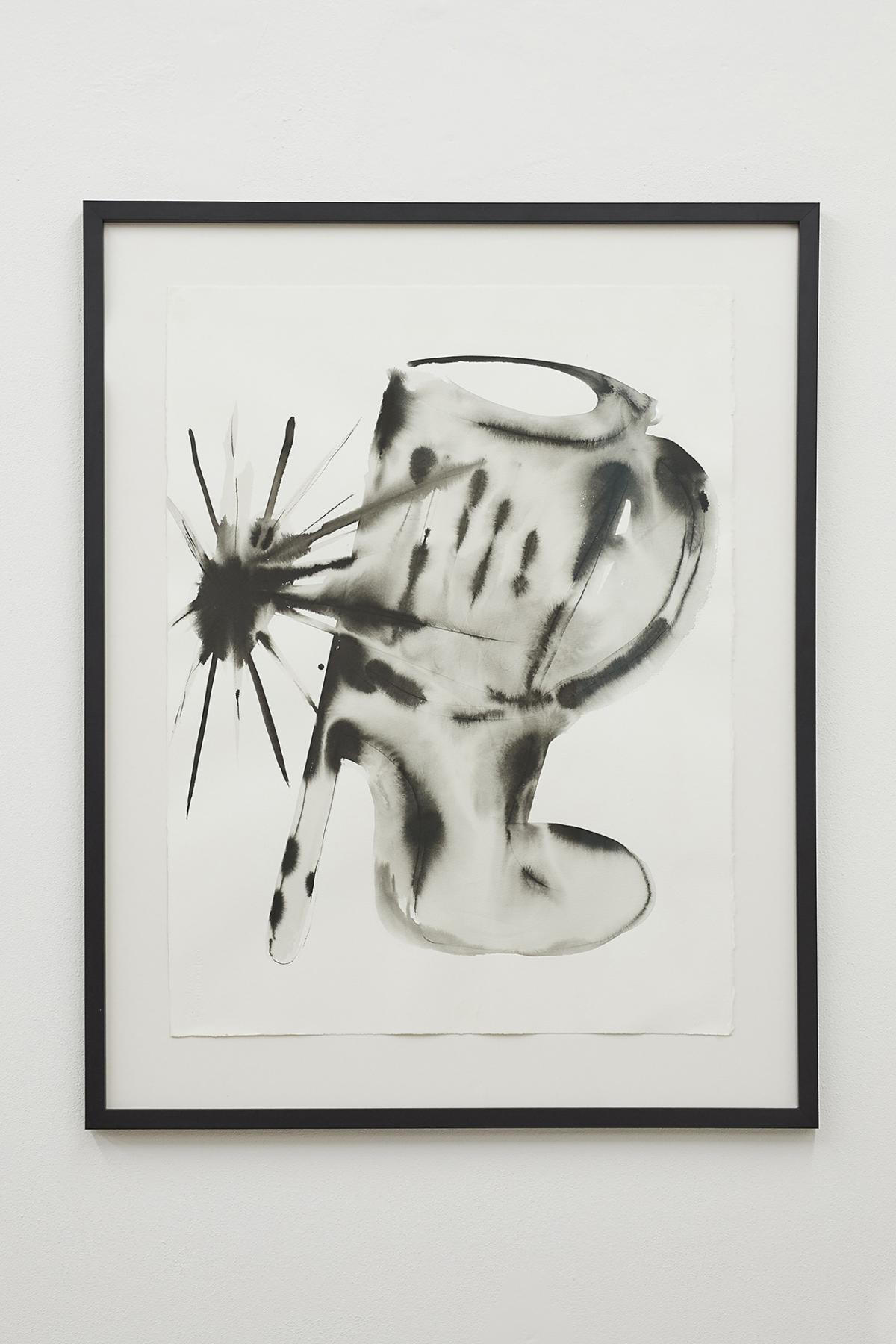 As each story builds individually, the collective cohesion between thought and materiality, and historical continuity and interiorized fleshy memory of the subconscious, builds a thesis towards the inexistence of the contemporary. What connects all the stories traverses’ generations, geographies, and time, towards a feeling of intuition, of the magical, an unknown known. With active themes of religious references, the works position the contemporary as within the shadow of morality, with healthy critical attitudes to lingering conventions. If each generation interprets ever-present themes to make them applicable to their circumstances, the works address issues taken from everyday life experiences. Pasolini believed that his society had forgotten the value of oral tradition and lost much of its critical understanding – each of his fables teaches us to empathise with the evil character, the antagonist, the terrorist, the intruder. As in The Trilogy of Life, the exhibition itself, as well as individual pieces, are a retelling that re-enact, or breathe new life into an endless struggle through fragments of storytelling.