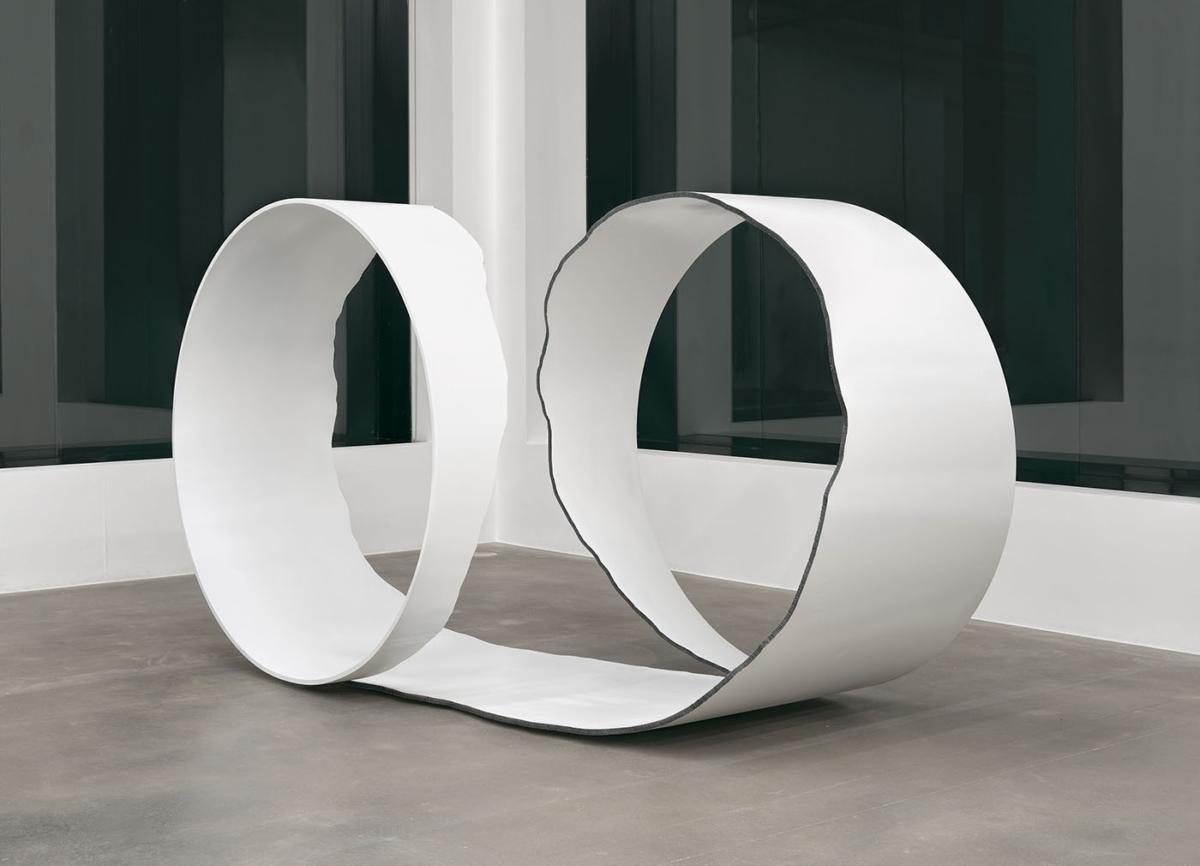 Hauser & Wirth London is delighted to present a solo exhibition by Monika Sosnowska. The exhibition features an entirely new body of work and is the artist’s inaugural exhibition in the gallery’s London space. In recent times Sosnowska has further developed her dynamic approach to materiality in which architectural and sculptural elements are hewn together in disorienting new configurations. Entitled ‘Structural Exercises’, the presentation comprises seven distinct sculptural works that together form an immersive exhibition which takes over the North Gallery; it is also the first major project she has staged in London since ‘reconfigured’ at The Serpentine Gallery in 2005.

Sosnowska’s sculptural language emerges from a process of experimentation and the deft appropriation of core materials that are closely associated with construction, such as concrete, steel beams, pipes and reinforcing rods. These elements, that occur at architecture’s fringes and under the skin of a building to provide support and rigidity, are manipulated and warped by Sosnowska, taking on an independence in which their former functionality is implied yet defunct. In this way, the works are precisely composed citations that speak directly to the viewer’s preconceptions, by drawing upon both the artist’s personal, and our collective, experience of the built environment as a site of memory that is adept at conveying both political and psychological significance. 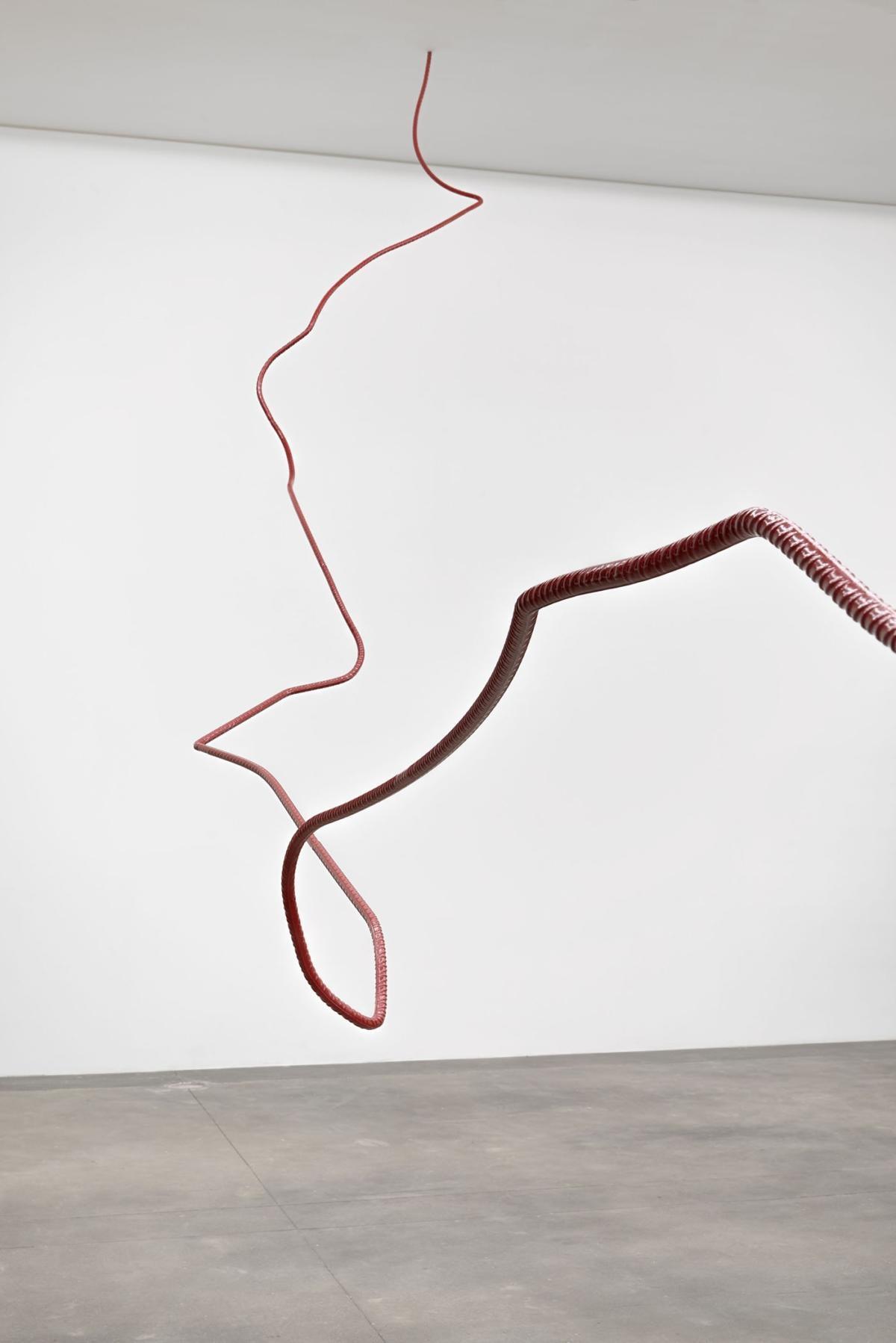 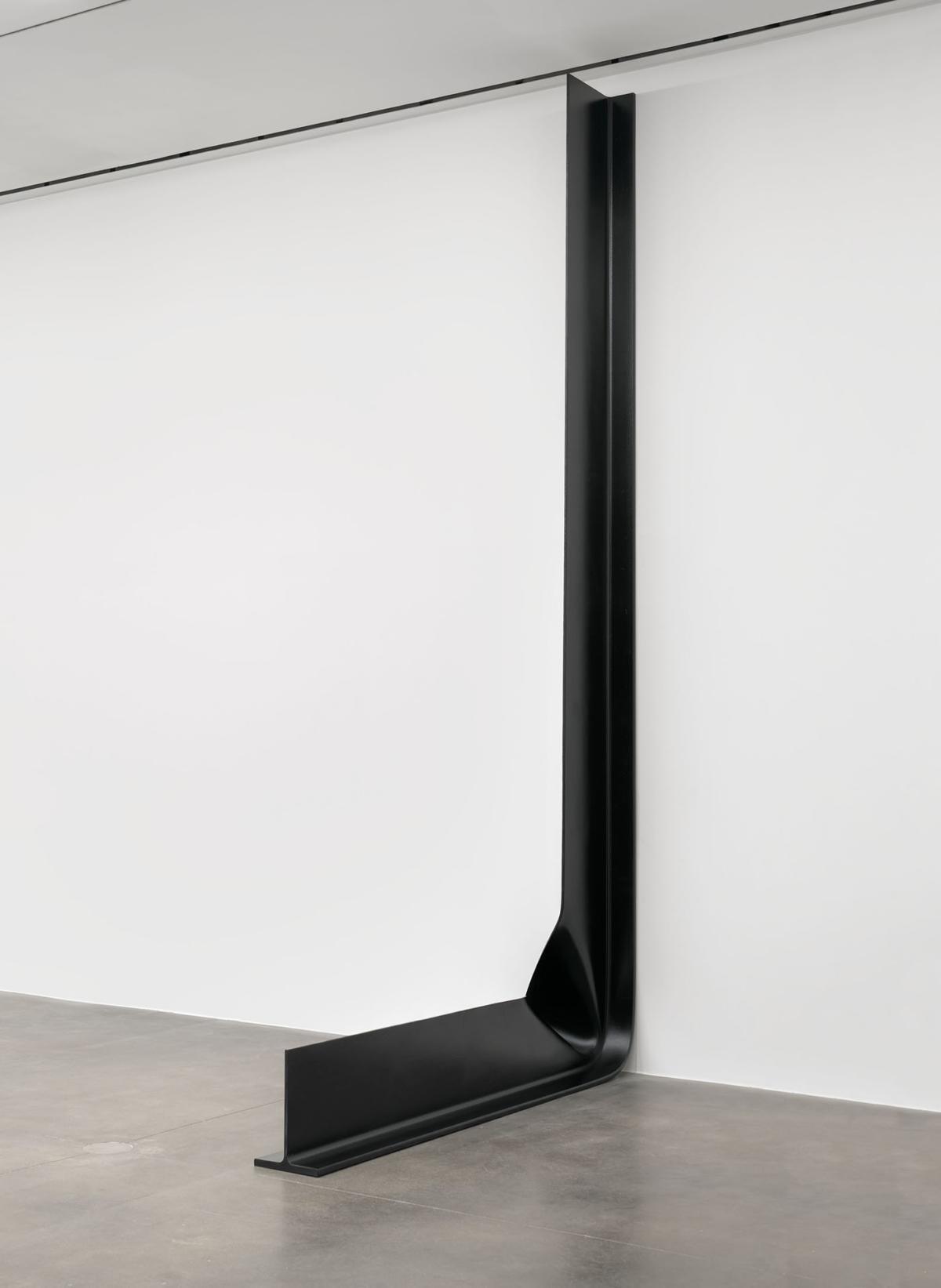 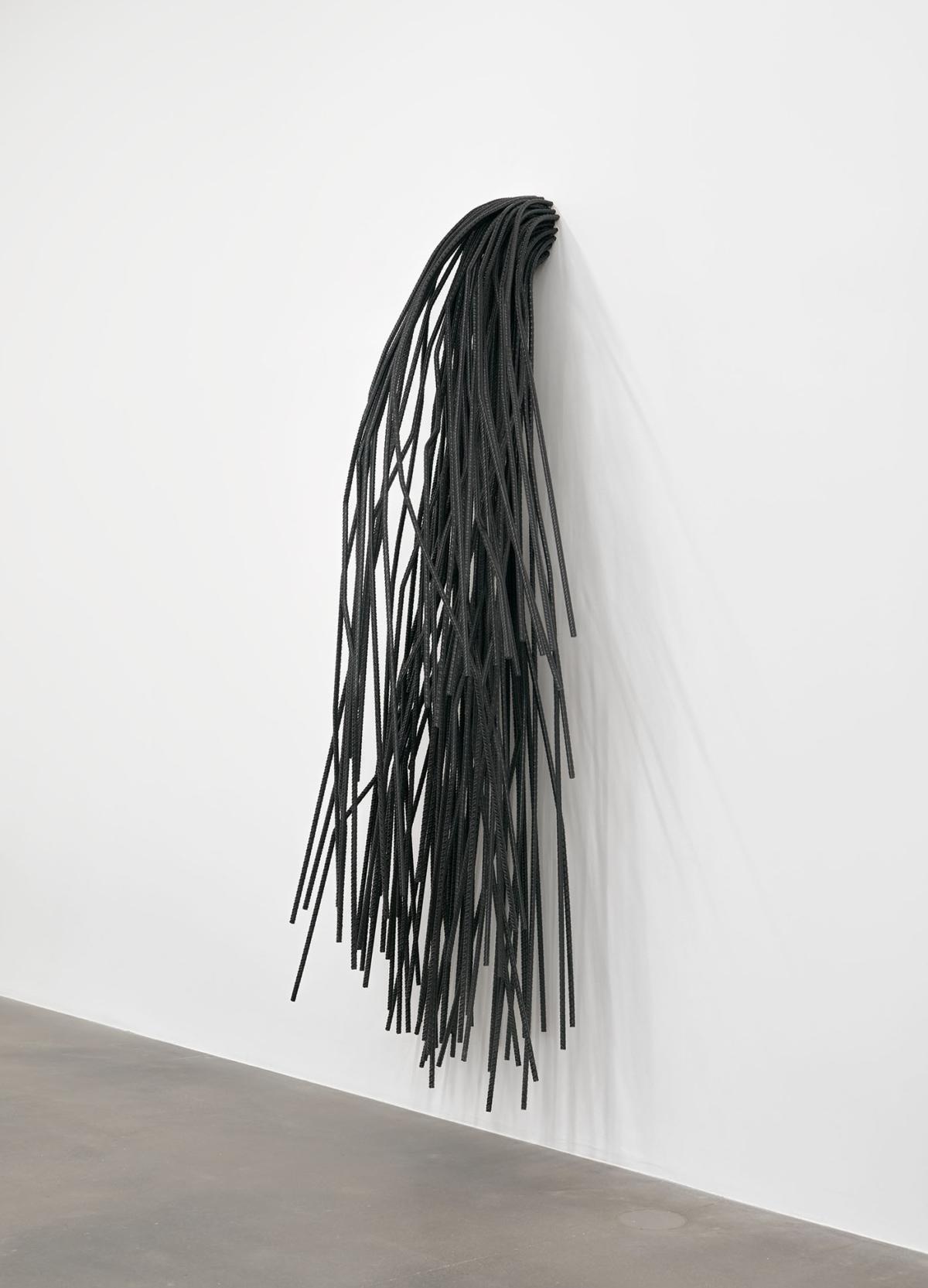 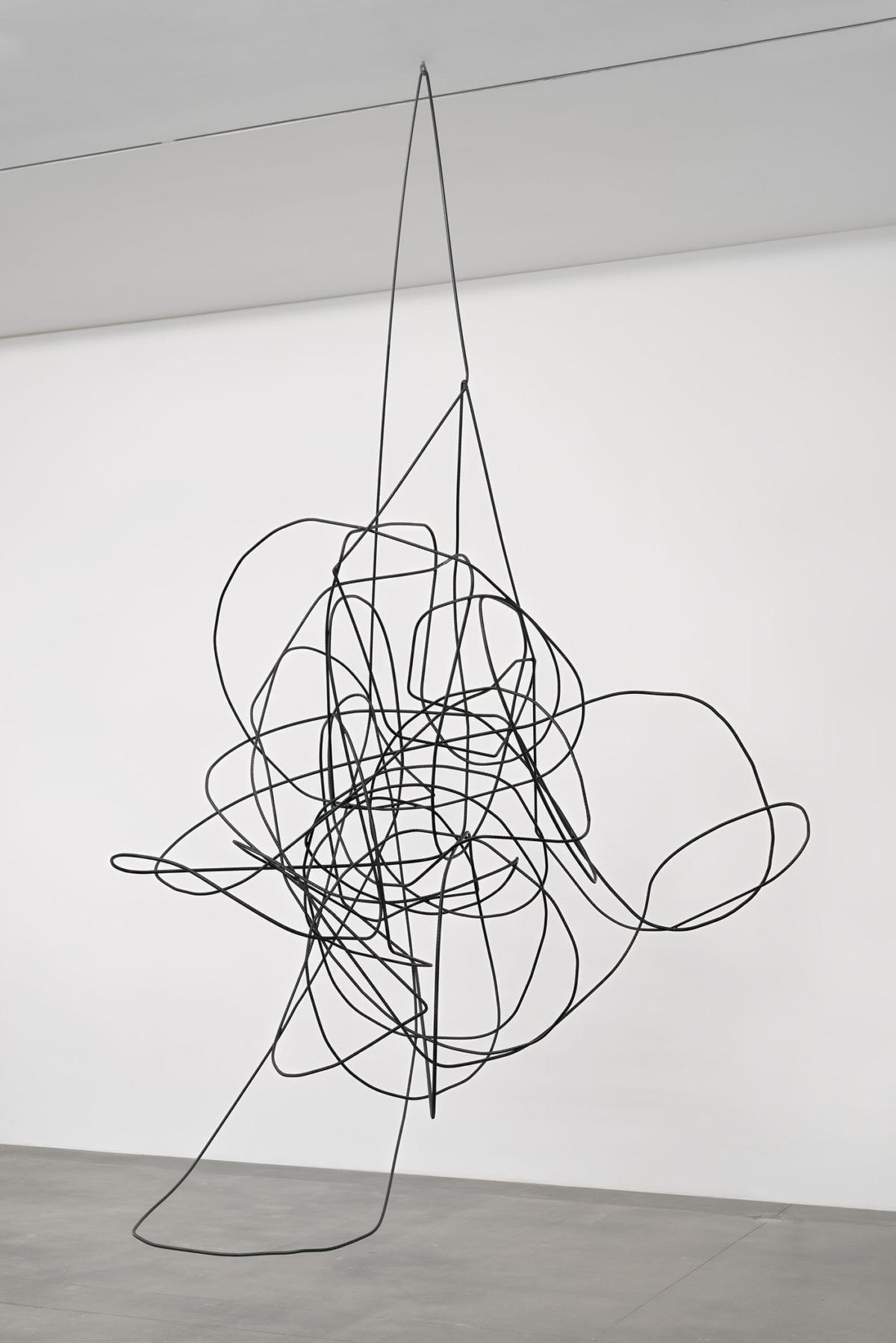 The artist’s interest in the exposed architectural fragment as a poetic metaphor has its origins in her experience of the rapid transformation that consumed Sosnowska’s home town of Warsaw. By the 1960s, Warsaw’s urban environment was etched with a modernist architecture that was imbued with utopian aspirations as part of a desire to remould the city in line with a new socialist order following the devastation of World War Two. As political power shifted from Communist to Neo-Liberal governance in Poland in the late 1980s, as the artist was coming of age, this drive for architectural order had stalled. Buildings were razed and were quickly superseded by new developments as capitalism took hold. The resulting dialectic of the construction and destruction process, along with the potential of ruin and reversal, wrought on the very fabric of the urban environment, has had a lasting resonance for the artist.

Sosnowska has previously incorporated elements of modernist architecture and recognisable details including staircases, handrails and street furniture to create unexpected encounters with fragments that have an uncanny familiarity. In this exhibition, however, Sosnowska subsumes the prefabricated components and directs our attention to the materials themselves, the alchemical transformations to which they are subjected and the shifts of context they undergo. As Sosnowska explains, ‘Architecture arranges, introduces order, reflects political and social systems. My works are about introducing chaos and uncertainty. They make reality stop being obvious.’ 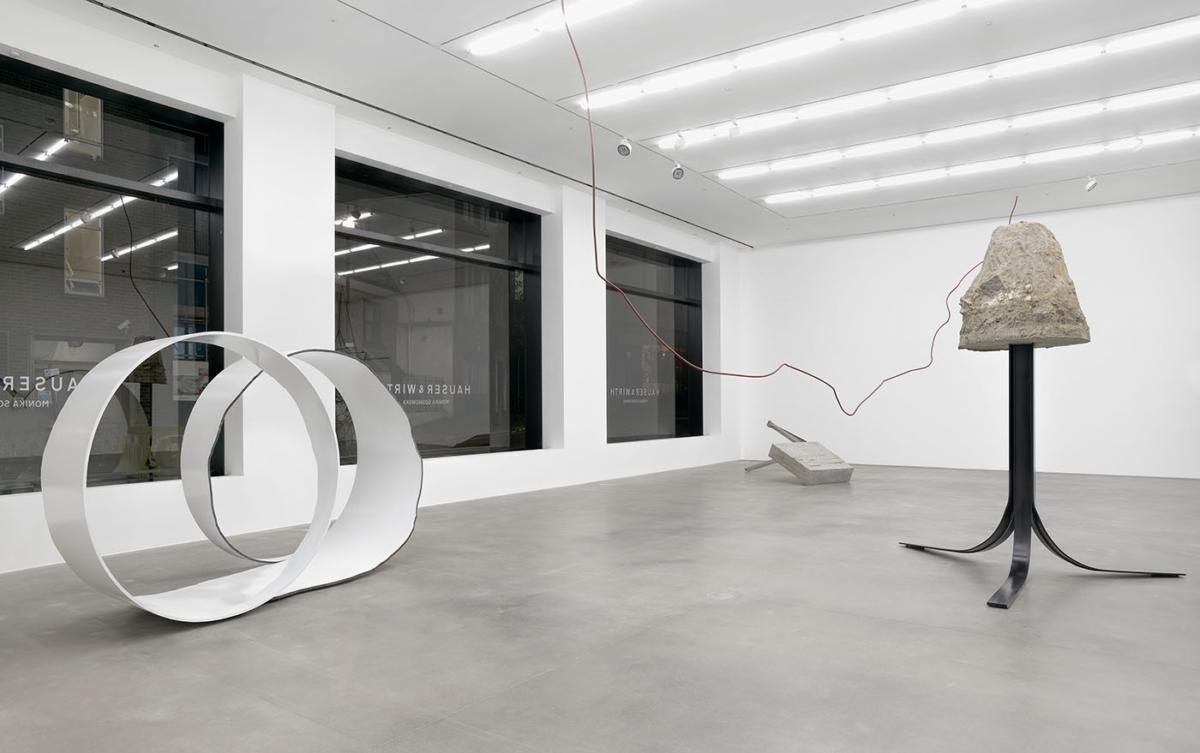 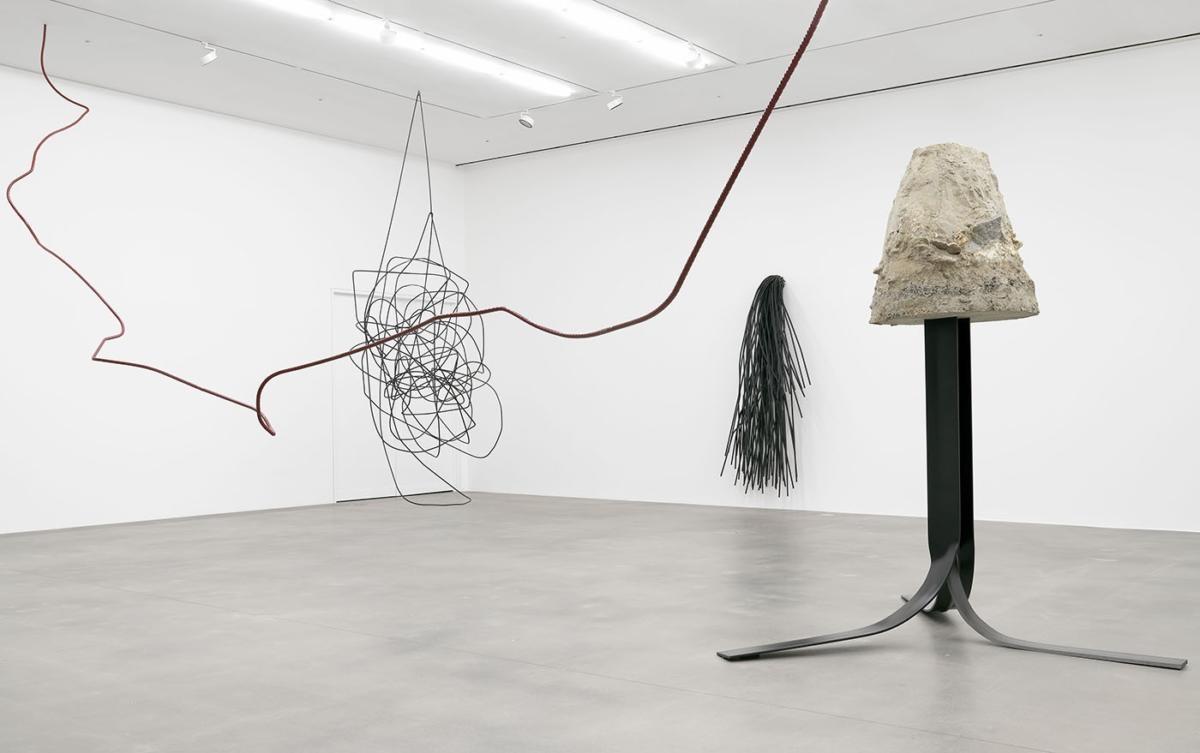 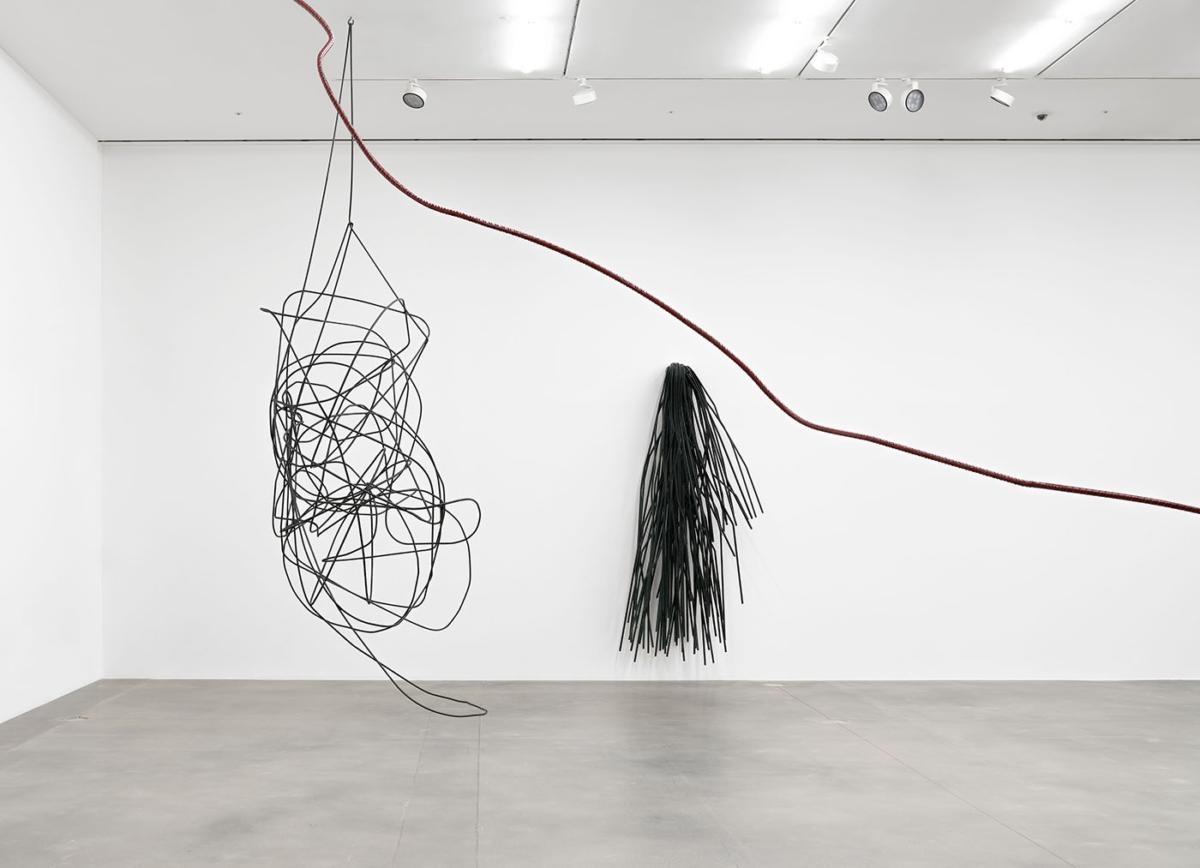 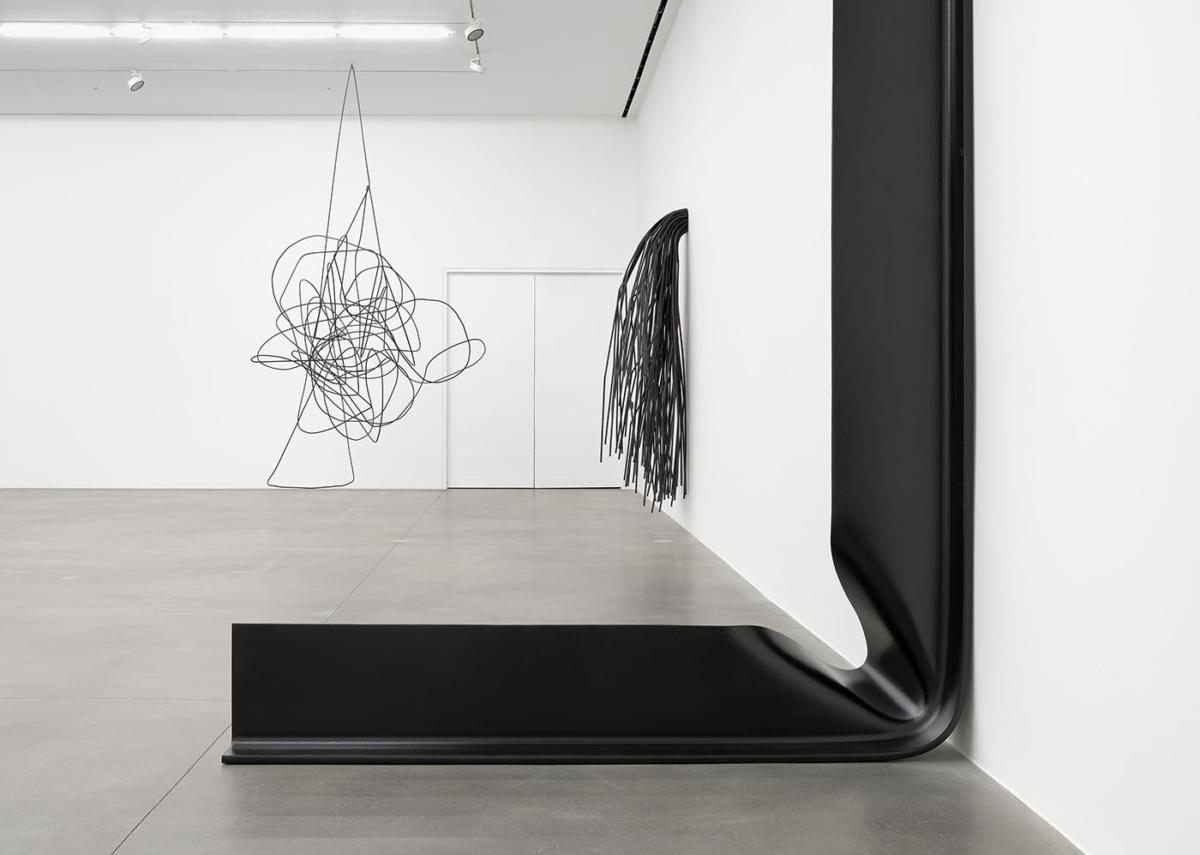 Several of the new sculptures on view emerge from the fabric of the gallery space and, in this way, take into account the viewer’s presence and dynamic movement through the space. In ‘Rebar 16’ (2017), steel reinforcing rods are gathered and protrude directly from the wall, deformed by Sosnowska into a ponytail form that, as if subject to gravity, hangs down towards the floor. This fluidity is mirrored in ‘Rebar 20’ (2017) formed from a steel rod which has undergone a transformation and traces a delicate line emerging and disappearing back into the ceiling. Another cluster of rods are contorted into a tangle in ‘Rebar 12’ (2017) and are suspended from a beam at ceiling height, which cuts across one corner of the gallery space.

Sosnowska adroitly subverts the inherent properties of the materials she uses, substituting their weight and durability for lightness and pliability. For example, ‘H and Concrete’ (2017) features a concrete ballast which is lifted towards the ceiling by a tripod formed from bent steel legs. ‘T’ (2017) is an L-shaped support, with the appearance of a pre-fabricated beam, which Sosnowska has deliberately inverted so that it runs across the floor and up the wall confounding the viewer’s expectations of this seemingly structural element. In the case of ‘Pipe’ (2017) Sosnowska shifts the topology of an imposing section of steel pipe that is sliced into in two places and opens out into a double cylindryical form which has the fluid qualities of a Möbius strip.