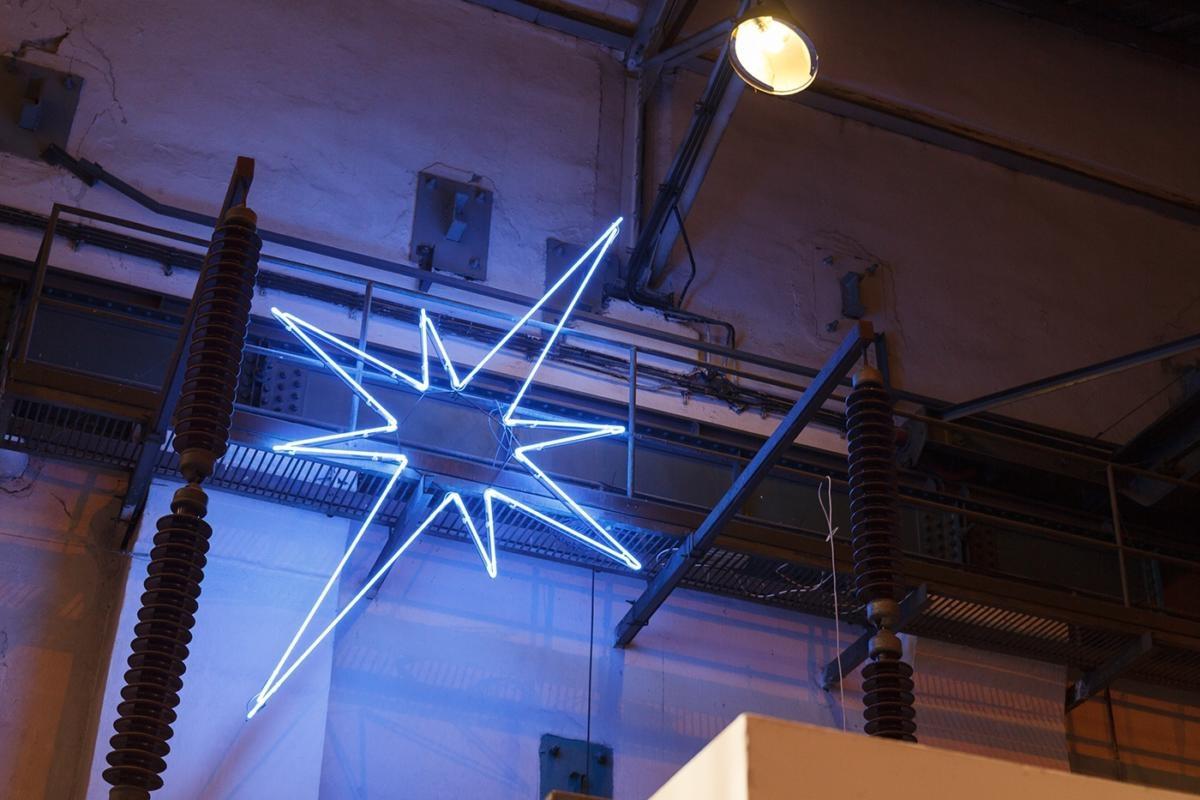 Pluses and Minuses. On Białystok’s Power Station is an exhibition focusing on the old power plant in Białystok, at present one of the Arsenal Gallery’s seats. Apart from referencing primary electricity knowledge, the title is also a metaphor of the experience of an institution of culture operating within post-industrial space, non-transformable for purposes of its new function until present day. The exhibition has thus become a type of link between the present and past, confronting the building’s original industrial purpose with activities typical for a contemporary art gallery. Each of these functions has been separately highlighted in a different part of the show.

The first historical part was designed in consultation with historian Wiesław Wróbel, researcher of the history of Białystok and its environs, head of the Office for Collections Digitalisation at the Jerzy Giedroyć University Library in Białystok. The Library holds archive materials, i.a. books from the plant’s library named after director Kazimierz Riegert and established by the staff, maps, photographs, original city wiring records, and historical power appliances donated by the Białystok University of Technology and private collectors passionate about electricity. This part of the exhibition is more than a simple attempt at confronting the building’s history – it is also an analysis of the role played by Białystok’s power plant in the city’s civilisation and economic development in the context of the early 20th-century global industrial revolution.

The other, contemporary part of the exhibition, focuses on relations between art and the old power plant building. Some pieces are site-specific installations realised in recognition of the location’s context, their theme tying in primarily with the building’s original intended use: power generation, light, electricity, and voltage. 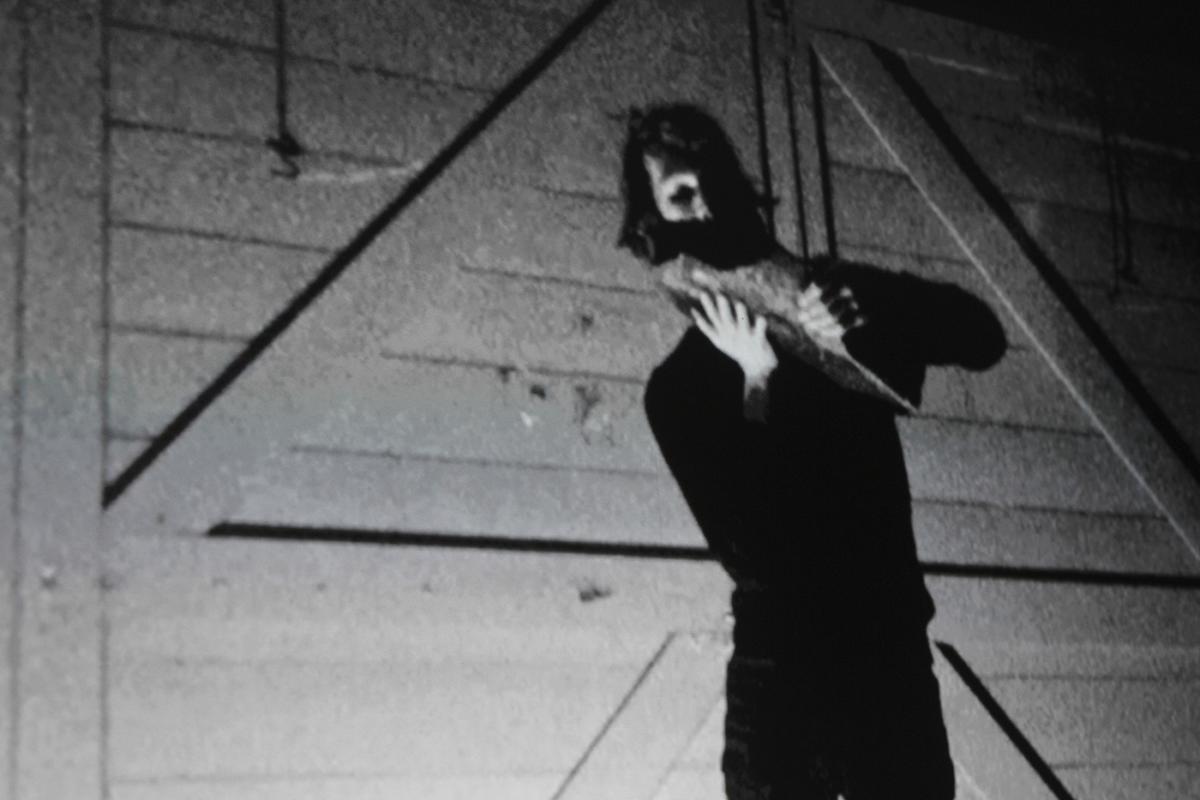 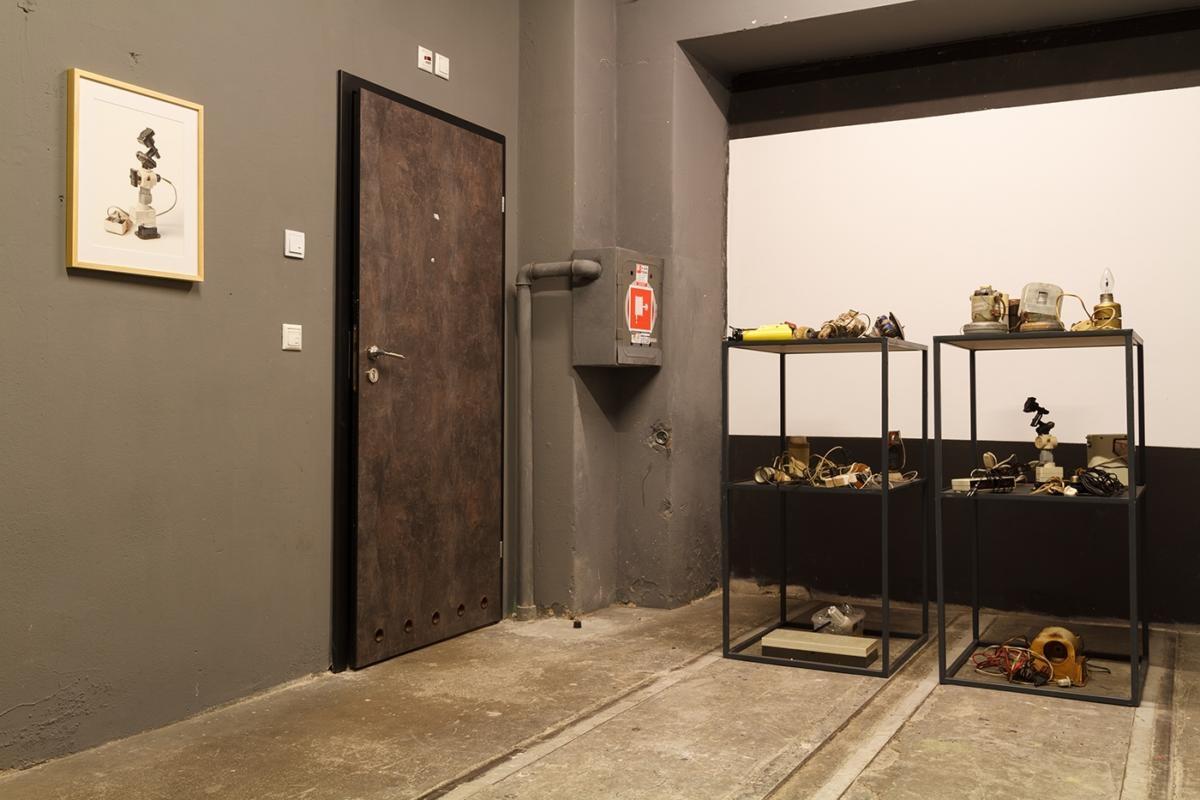 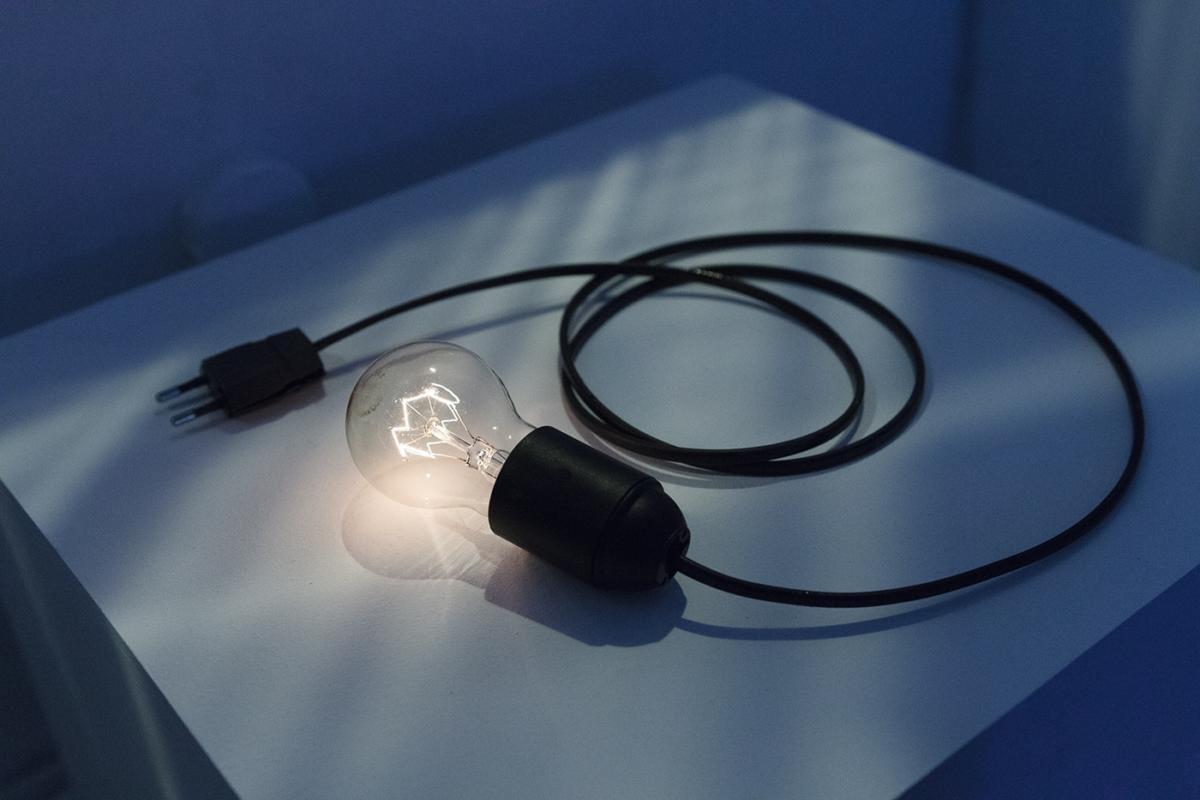 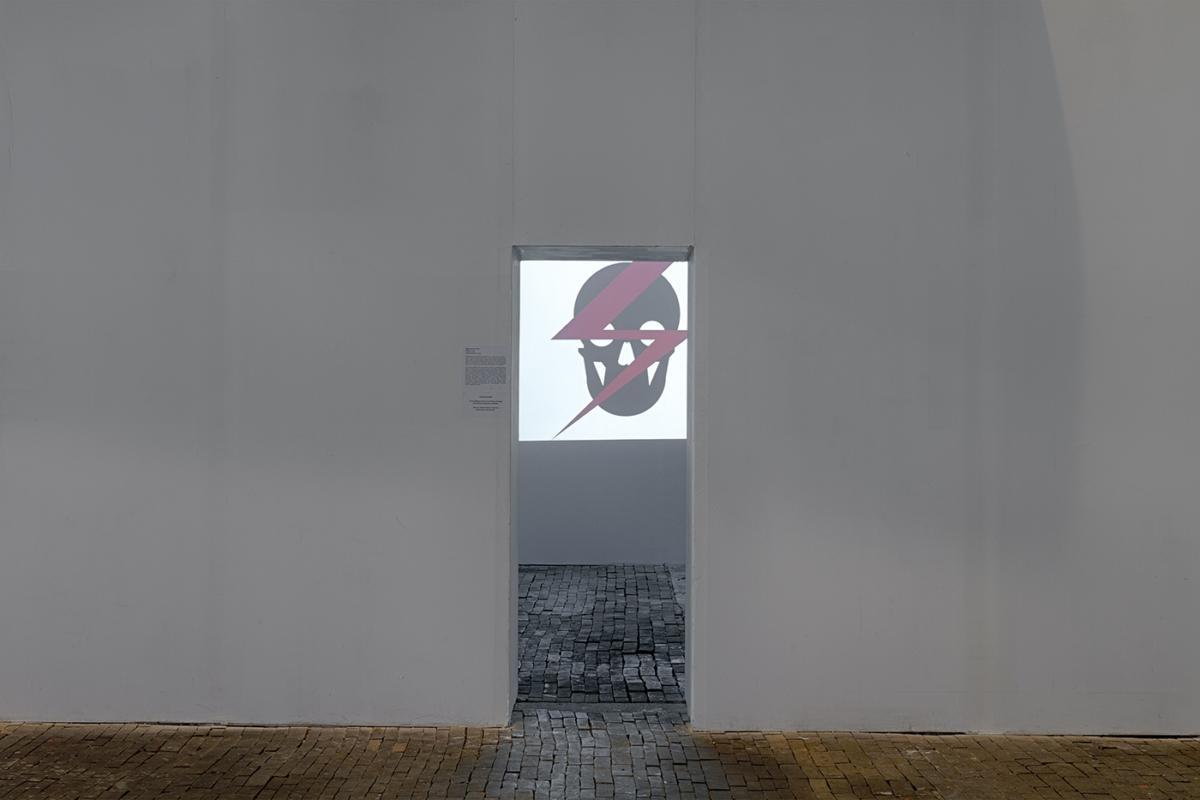 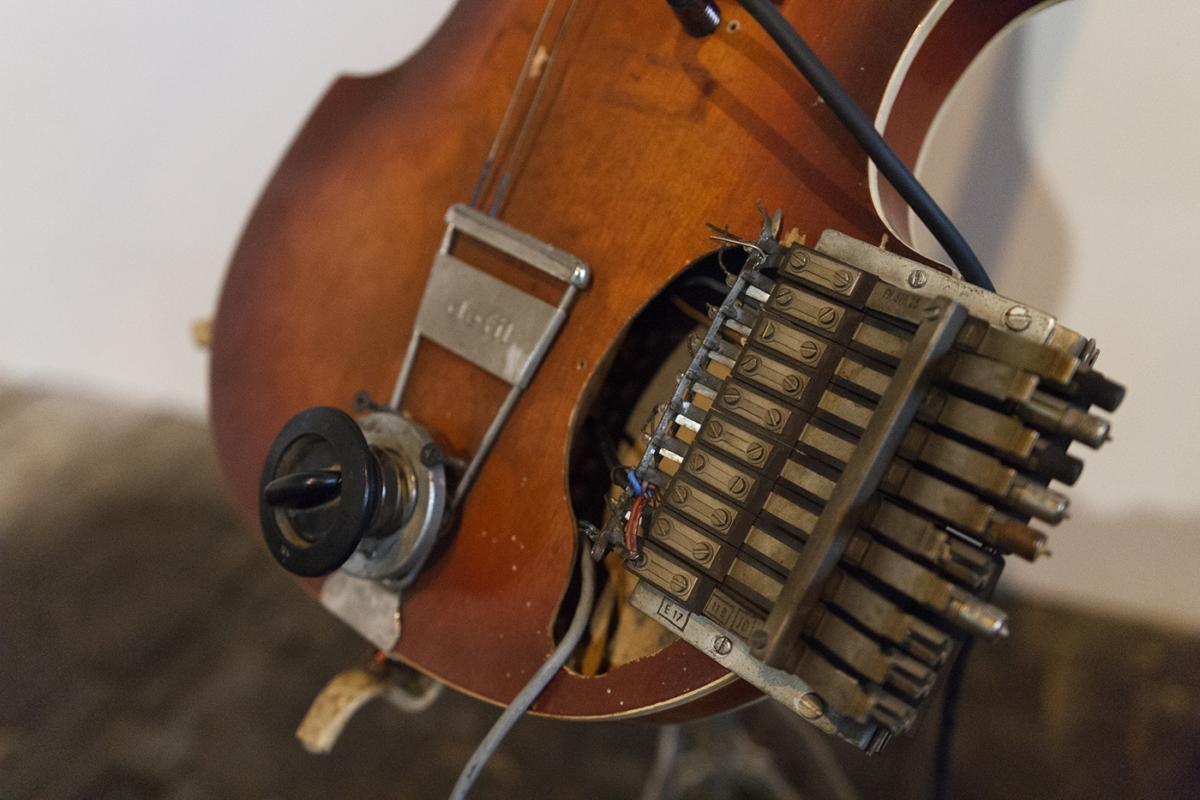 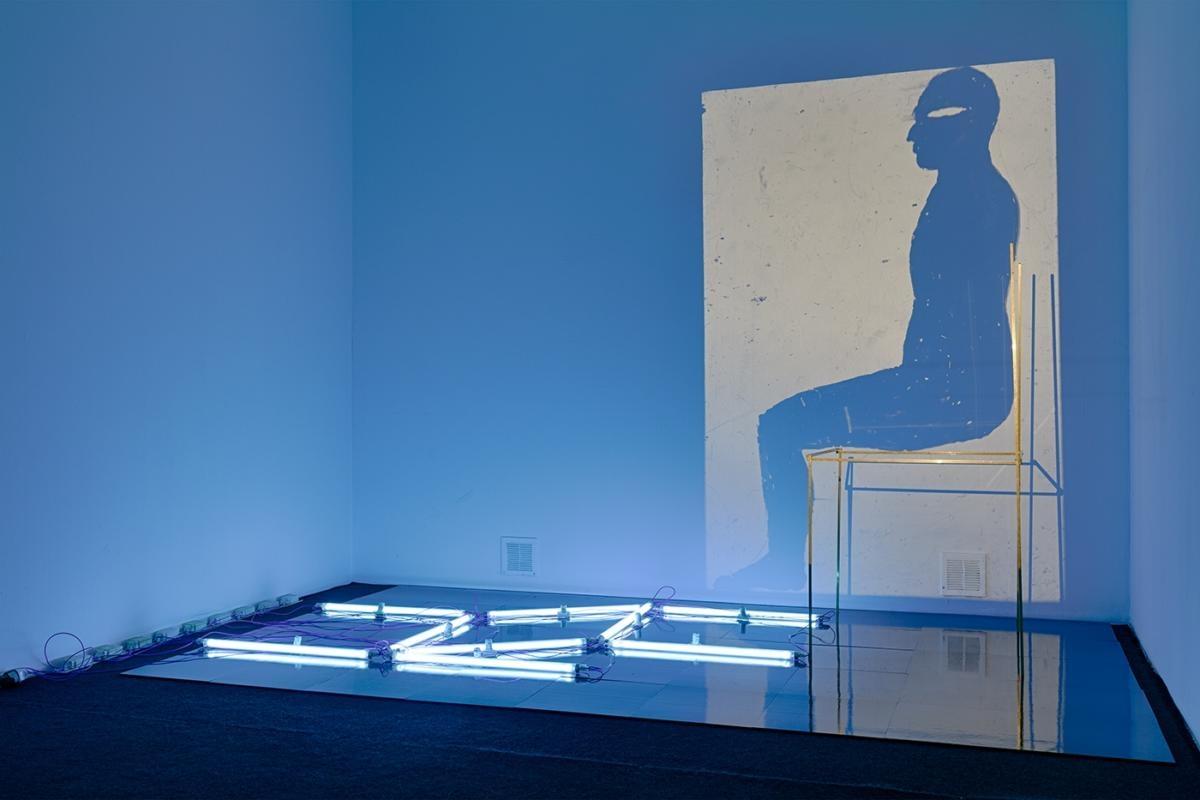 Mirosław Filonik, LSD for You, 1989, installation

Białystok’s power plant opened in 1910 – relatively early, given the fact that the history of electrification in Poland dates back to late 19th and early 20th century. In Warsaw, the first power facility (Powiśle Power Plant) opened in 1903; in Łódź – in 1907. Polish electrification plans drafted both before and after World War One spanned the country’s largest cities as well as smaller towns and villages – yet no major success was recorded in the field until the late 1940s. Electrification plans were of particular importance during the interwar period upon Poland regaining her independence. Universal industrialisation, drive towards modernity, and mechanisation were all vital contemporaneous assumptions, in Poland as well as abroad. During the 8th Congress of Soviets of 1920, Lenin referred to the Plan for the Electrification of Russia as the party’s second programme; his slogan ‘Communism is Soviet power plus the electrification of the whole country’ went down in history, history of art included. Electrification or five-year plans were among the most popular subjects explored by Russian constructivists committed to the development of a new post-revolutionary world, declared supporters of the revolution and Soviet state. Often as not resorting to photomontage, they designed posters, periodicals, covers, and propaganda pamphlets, their chief motives including smoking factory stacks, power poles, turbines, steam engines, airplanes, and skyscrapers – all attributes of a modern and mechanised world. Such works were mostly created by Gustav Klutsis, but also Aleksandr Rodchenko and El Lissitzky. Many served the purpose of promoting electrification and industrialisation plans, their message one of glorifying labour efficiency, managerial role of authority, and creators (or artists) as organisers for the working masses.

Labour efficiency and the optimisation of industrial production and work are slogans which, upon arrival of the industrial revolution, have become part of the language of artists active in joining the manufacturing process as well as the working masses (proletariat). They all share a source: the system of labour optimisation designed in the 1880s by an engineer from Philadelphia Frederick W. Taylor, later fine-tuned by Henry Ford at the plant he owned in Detroit (subsequently duly dubbed Taylorism or Fordism, respectively); the system’s purpose involved improvements in the efficiency, effectiveness, and speed of mechanised production. In Russia, the idea of Taylorism was officially promoted in the 1920s. Soviet constructivists, in particular those with productivist ties, fell under its charm as well. Polish constructivists – i.a. Władysław Strzemiński – were equally fascinated with the labour optimisation system. In the 1930s, Strzemiński wrote, ‘The rate of wages in the US, the source of the oncoming […] wave of prosperity, was a thing unbelievable to Europe and her reality. Labour optimisation at Ford’s factories yielded a drop in prices, offering everyone an opportunity to own their own car. Optimisation reduced manufacturing costs amazingly, offering serially democratic methods of satisfying the needs of all mankind. […] It seemed as if the development of production forces in combination with the rising wave of prosperity automatically has yielded the most flawless related social systems imaginable, liberating humanity from its bonds of history.’[1] 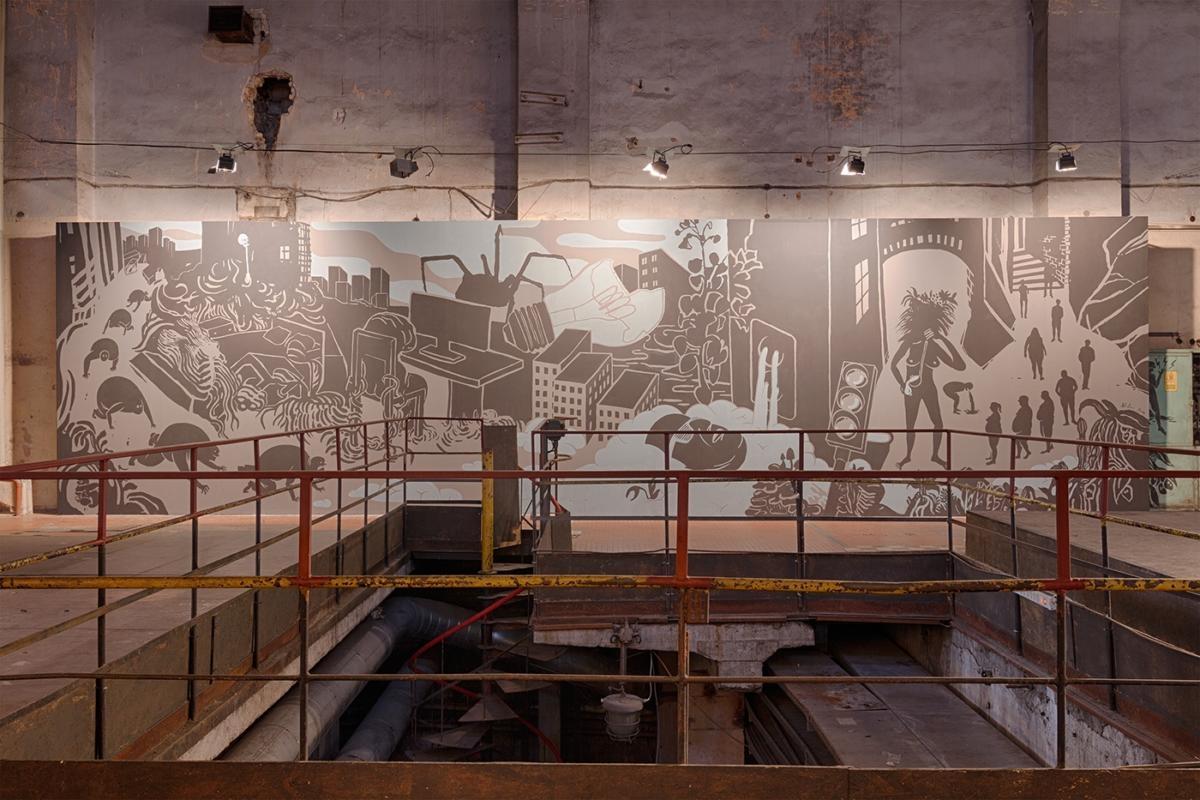 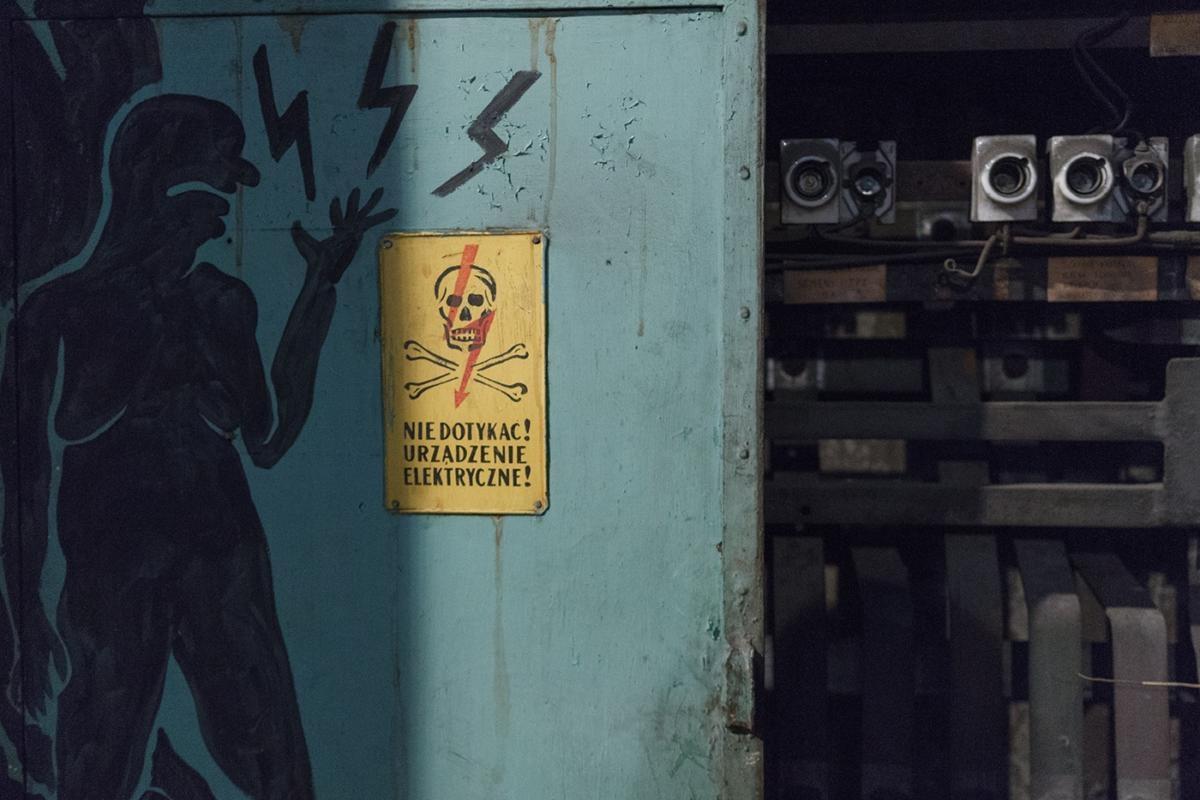 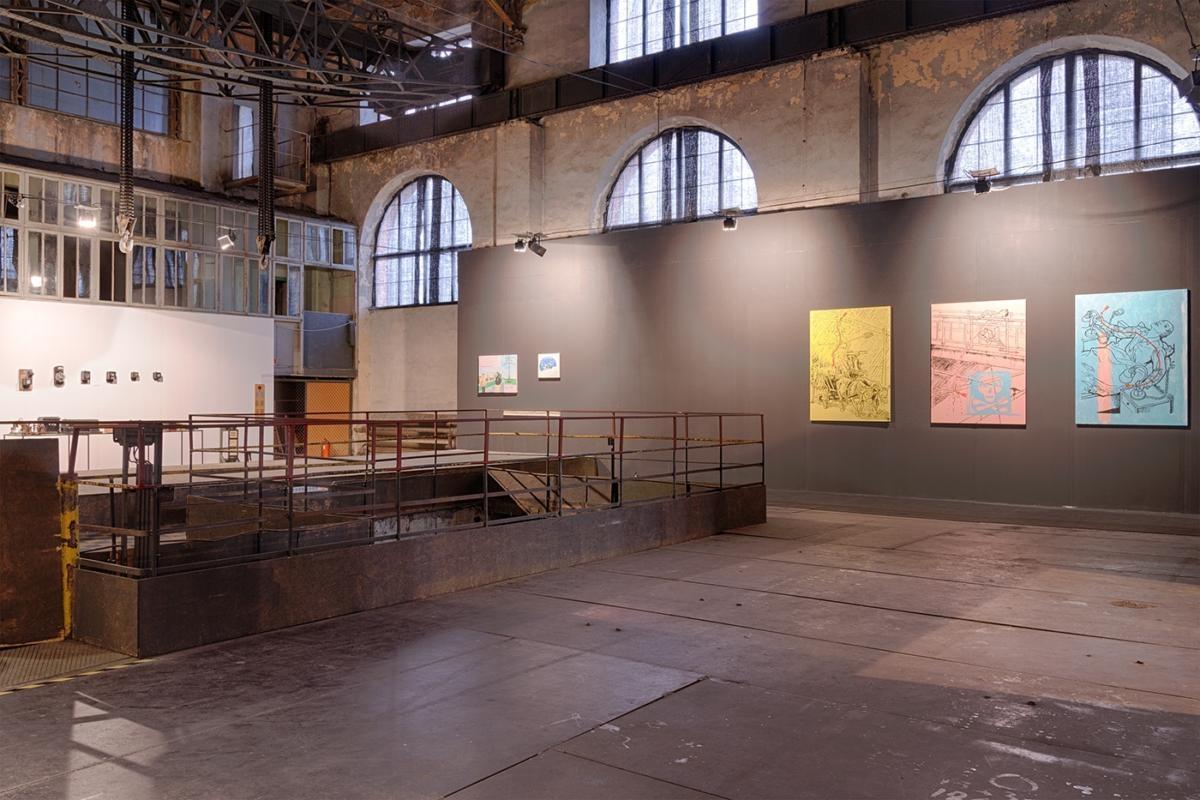 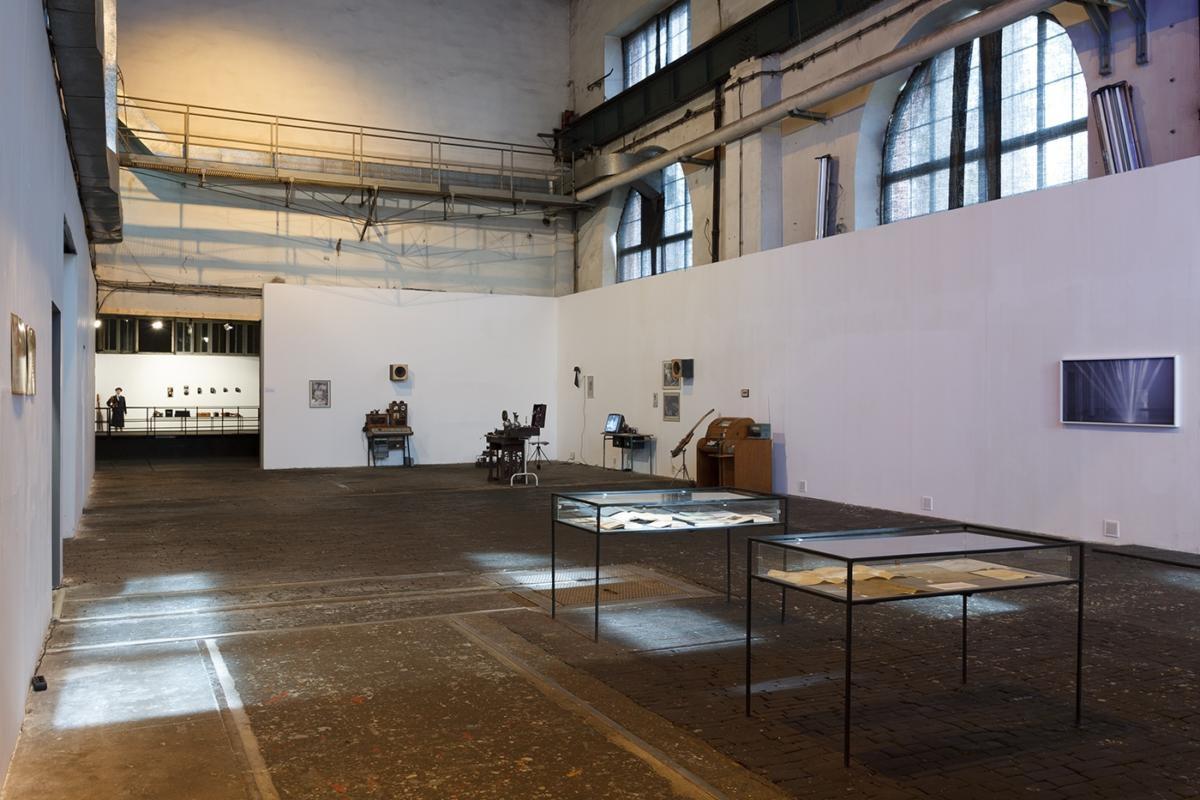 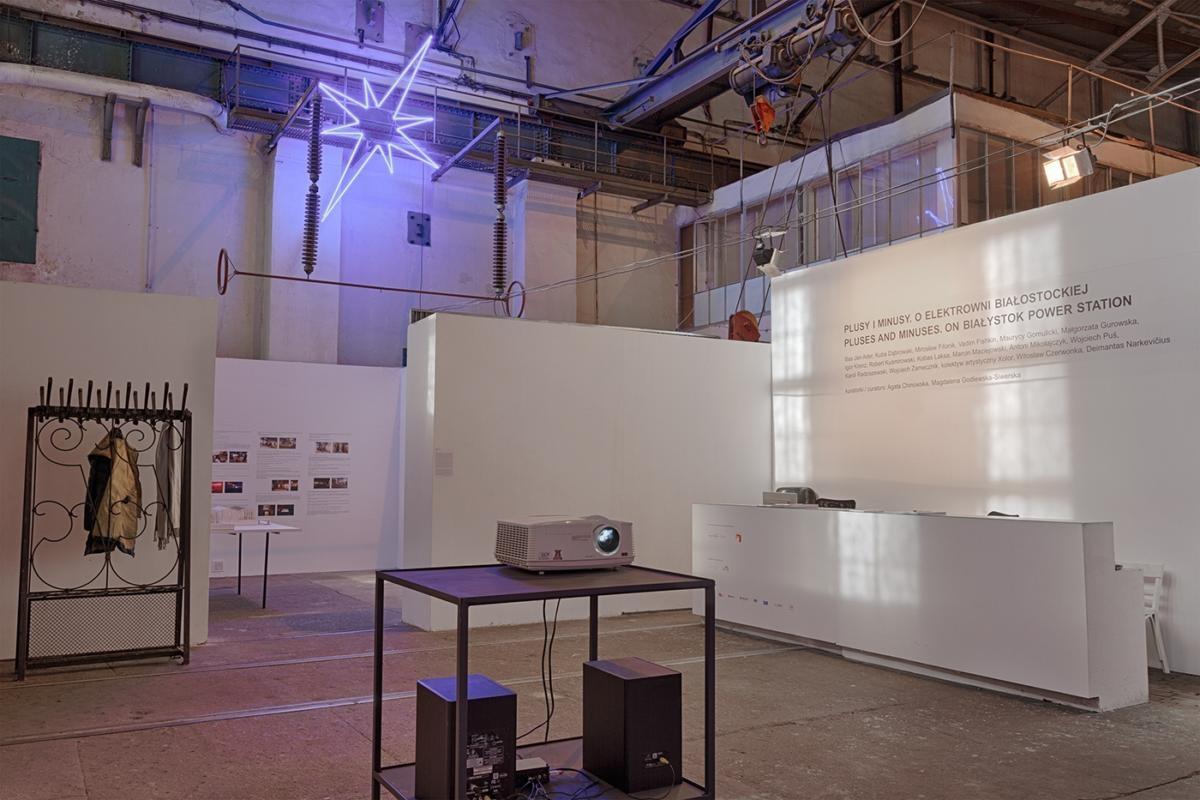 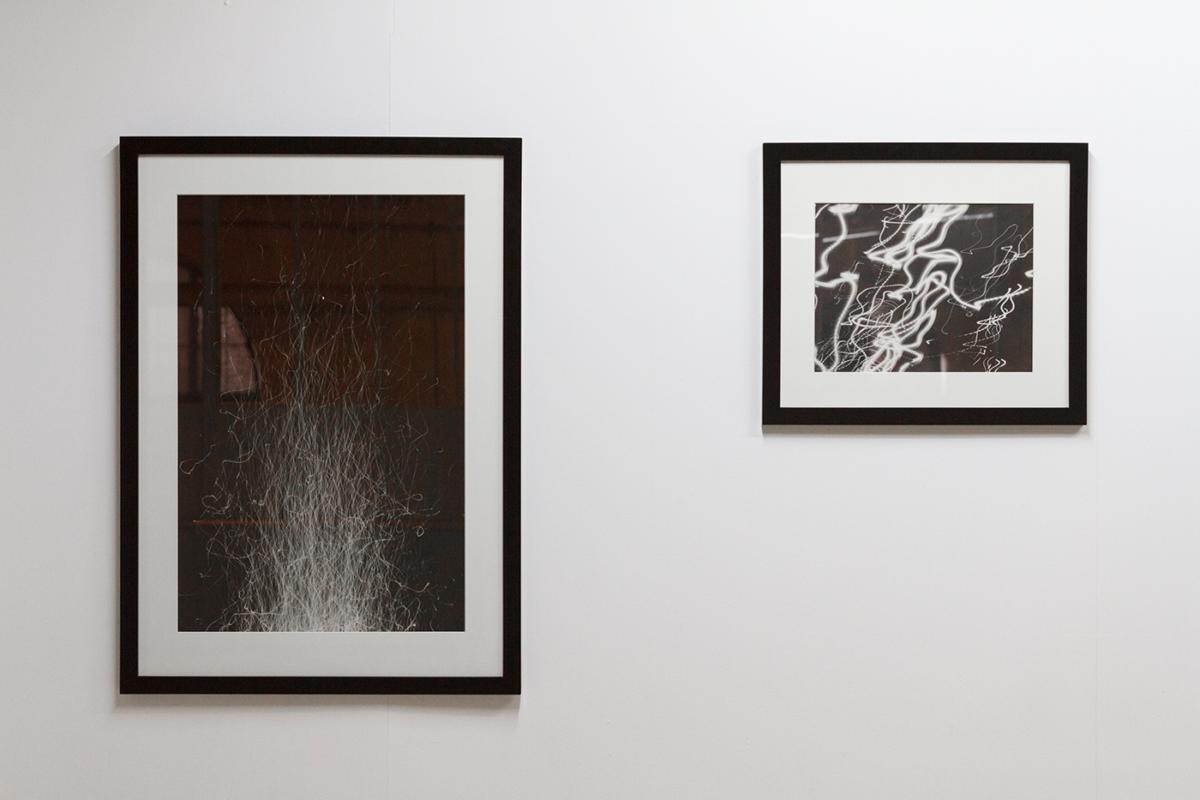 This was but one of the many utopias of the time, wherein technology and machines were to introduce a new order, and organise a new society living in conformity to the rules of modern civilisation. Regrettably, in the wake of World War Two the drive towards modernity was replaced with the necessity to reconstruct ruined factories and industrial plants. An excerpt from a 1945 Polish Film Chronicle titled Nowa Polska. Reportaż z frontu odbudowy (New Poland. Report from Reconstruction Frontlines) shown as part of the Pluses and Minuses. On Białystok’s Power Station exhibition opens with a frame of smoking factory stacks. This footage of restoration in Białystok features ruined homes, public utilities and production plants, as well as the wreck of Białystok’s power plant. The commentator is nothing but blunt: ‘Białystok – a former textile industry giant. Before the war, the city boasted 80 textile factories and 40 other industrial plants. Germans blew factories up; in helpless hatred, vandalising hammers smashed invaluable machinery to smithereens; the local power plant fell silent; sawmills, glassworks, and metalworks came to a standstill; eighty percent of Białystok’s industry was totally annihilated […].’ Works to restore the city and its industrial plants commenced immediately upon the end of war. A special commission arrives to announce an official month of urban reconstruction. Restoration brings everyone on board: trade unions, political parties, local residents, even schoolchildren. The next Film Chronicle proclaims: ‘Sawmills, tanneries, the oil factory, the marmalade factory – all are up and running! Białystok’s power plant is smoking again! […] Białystok will be reconstructed! Worker! Machines are waiting for you!’ Such are the final words of the film. Behold a revival of massive pre-war utopias of constructing a modern world with the working class’ hands.

One of the exhibited works explores such utopia. A video titled Energy Lithuania by Lithuanian artist Deimantas Narkevičius forming part of the Arsenal Gallery’s Collection II tells the story of Elektrėnai, a power plant erected in the 1920s in the Lithuanian town of Elektreny, told from the perspective of a plant’s employee of many years. The artist goes back to colossal ideologies of the 1920s at the point of their downfall. In many works, this one included, Narkevičius analyses communist revolutionary utopias. Energy Lithuania is a documentary focusing on ideas of modernism combined with industrialisation. This is a story of a monument to such ideas, their failure, and their melancholy.

In closing, it is noteworthy that ten years have just passed since the first exhibition organised by the Arsenal Gallery in the old power plant building[2]. The current presentation – Pluses and Minuses. On Białystok’s Power Station – is a nostalgic, if not outright dismal account, its vital assumption involving an attempt to confront the context and energy of the location we are at today.