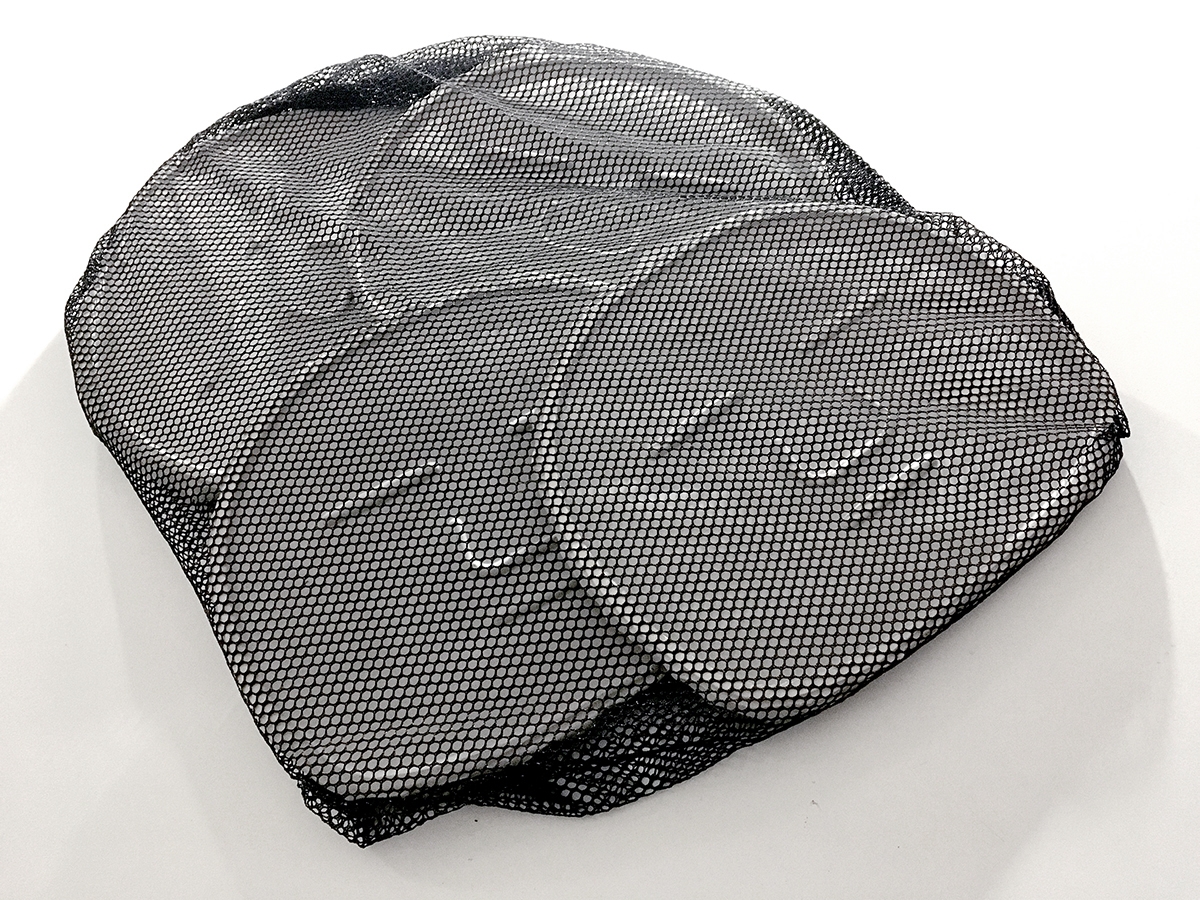 Jagna Domżalska: The three of us have developed an exhibition which touches on the issues of identity. When I say ‘touches on’ I do so deliberately, because it’s clear that such a capacious notion cannot be discussed or exhausted by means of such a limited form. For me, initially, it was a reference to your earlier projects and an impression on a theme, though it is clear that we happened to tap into multiple issues.

Little did we expect that [the exhibition] would dovetail so perfectly with the context of the place we were working at. The audience did notice that the show brings together works of a Pole and a Ukrainian, a female and a male artist. Plus, Trzyniec (Třinec) lies in the border area between Czech Republic and Poland, in the region of Cieszyn Silesia.

What were your ideas of the exhibition since its inception?

Agnieszka Grodzińska: I conceived it at first as taking a look at the question of identity in my own works, approaching that recurring theme in the light of what I have done over recent years. It turned out that more or less consciously, they continue to resurface: whether in the analyses of the symbol and sign, in the branding of visuality or in visual reflection on social identification systems.

Immediately afterwards there came the encounter with another artist, a familiar one but not truly known, whose works displayed interest in the very same problem, albeit deriving from distinct experience. The concept of the duet was brilliant in its simplicity, for where else than in such a primeval confrontation, exchange and juxtaposition can one truly see similarities and differences. The context of the location, of the boundary between countries came only towards the end, becoming apparent upon arrival, when you met people, heard their language, found out how they think of the town in which identity themes are equally important in conversations or family histories.

In the process itself, the juxtaposition of works on one plane proved astonishing, as we affixed them with respect to each other, and tried to find a system to coalesce them despite diverging techniques, strokes, colours, or motifs. Formal differences manifested themselves at each step, but still they faded as the works fused within the common context and the notions of identity became contextualized. 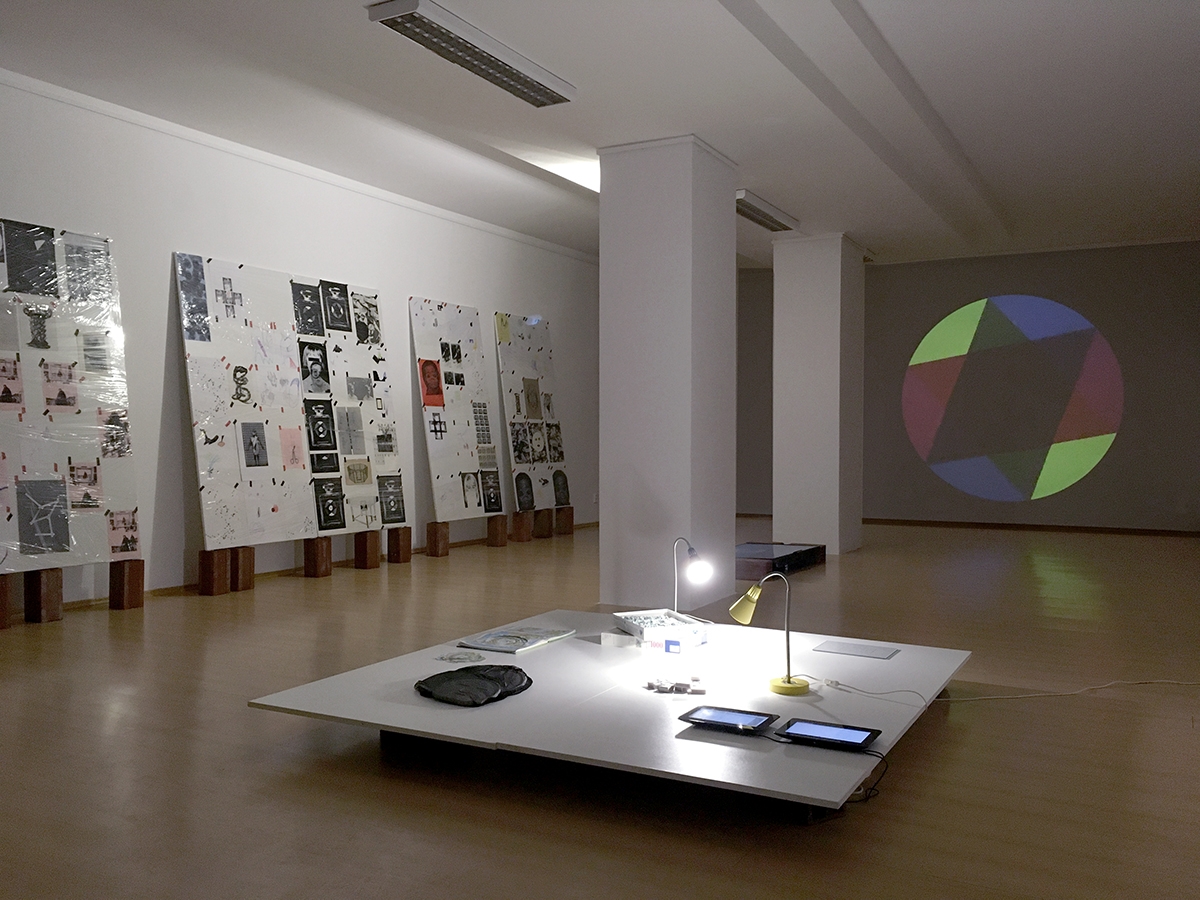 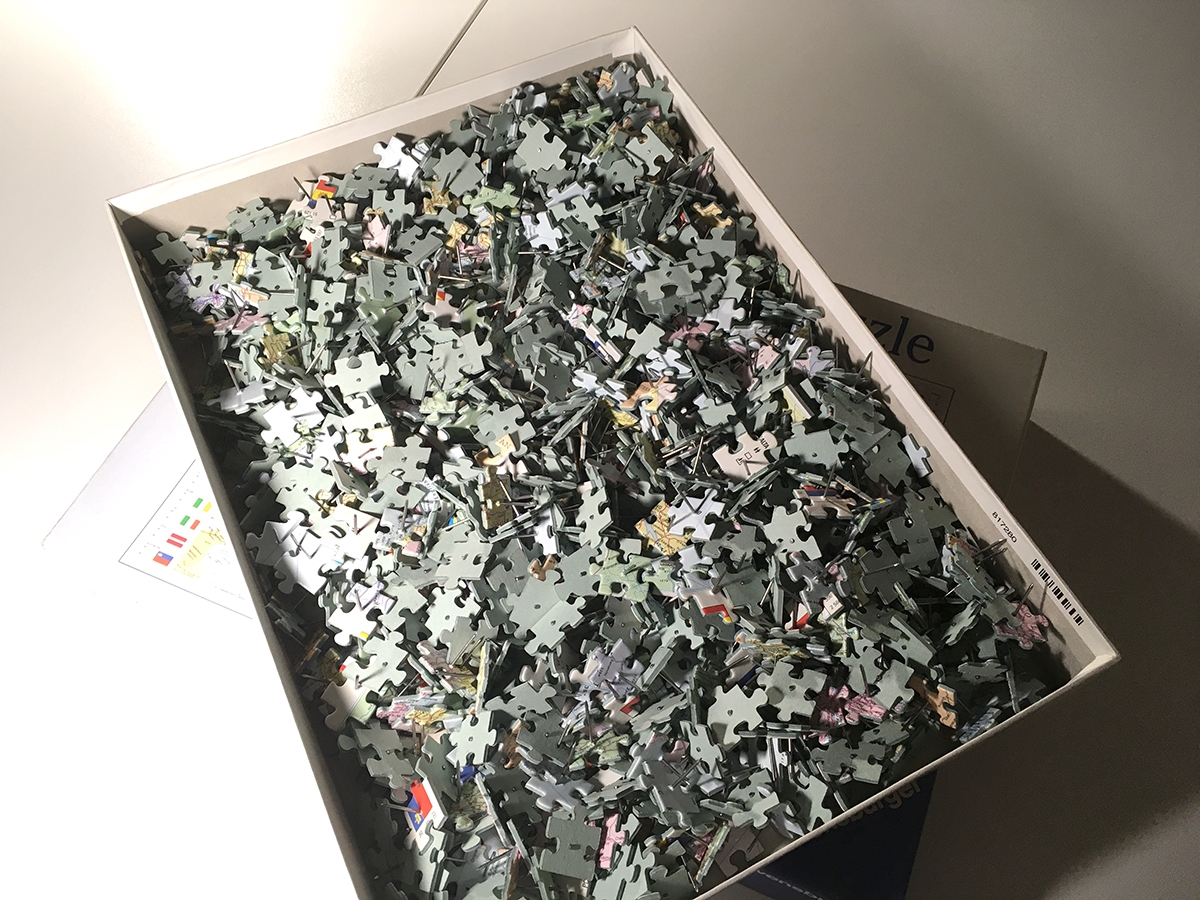 Vitalii Shupliak: I was curious of how the project would unfold since the very beginning, because I appreciate collaboration and dialogue with others. The process of constructing a joint exhibition—even though it involves some discomfort as it requires openness and effort to find consonance—yields greater experience and offers an opportunity to present one’s works in confrontation. Set side by side, pieces created by various artists can reciprocally reveal values which thus far remained latent and came to the fore thanks to new connections or contrasts between the works.

It was the creation of a “mosaic” based on the composite of our drawings and collages which was probably the most difficult challenge of the project. However, it ultimately proved one of the better modes to display works of that kind. The manner in which they were exhibited also tallied with the concept of the show, while the spectators were given the opportunity to identify which drawing is whose on their own, reflect and compare what is shared and what is fundamentally different.

This was a difficult task indeed. This was not a collective exhibition but a symmetrical juxtaposition of two artists and two oeuvres. Additionally, we endeavored to create a joint piece composed of your works on paper.

AG: Yes, Identical Identity came into being as a nine-panel installation comprising several dozen of our works. The latter were arranged into a smoothly flowing narrative which approached the theme in fairly broad terms; along the way, the works clustered together only to become dispersed a moment later, and then converge again at some juncture of contiguity. I found the range of motifs in both Vitaliy’s works and mine highly interesting: signs transforming into symbols, encoding national, biological, or cultural affiliation. Certain motifs fell in together, as in the video works where the forms of the star and burner were to some extent reflections of each other. The two large and two small projections complemented one another, resulting in a kind of conversation.

I wondered how we would tackle displaying your works and I was very happy of the juxtapositions which came about so naturally. The installation entitled Identical Identity is a particularly compelling outcome of the collaboration. All works can still be viewed separately, but they amount to a new work, a new composition; on top of that, they are coated (connected) using stretch wrap, which not only produces a new visual effect but also contributes a fair amount of meanings.

VS: Let me add that the use of stretch film had not been planned previously, and was in fact employed as a technical solution, only to become a unifying form which lent another layer of signification to the concept, enriching the individual themes and expanding interpretive possibilities inherent in this joint work.

Yes, I felt it to be the ultimate conjunction of two artists, which nevertheless preserved their individualities. Transparency and connection, with the state of connection laminated in a sense… Fixed, so to speak.

AG: I very much liked the fact that the stretch wrap fused it with another layer which has a perceptive effect—something along the lines of a reflection of lamp on the screen, or a mirror in the open-air. The layer reflected and distorted the field between individual works, which at times made precise identification of the whole difficult. We obtained a fragmentary, yet integrated visibility of the composition, which could be viewed from a variety of standpoints, as an entirety, a detail, an arrangement, a mixture of motifs or a fluid story. 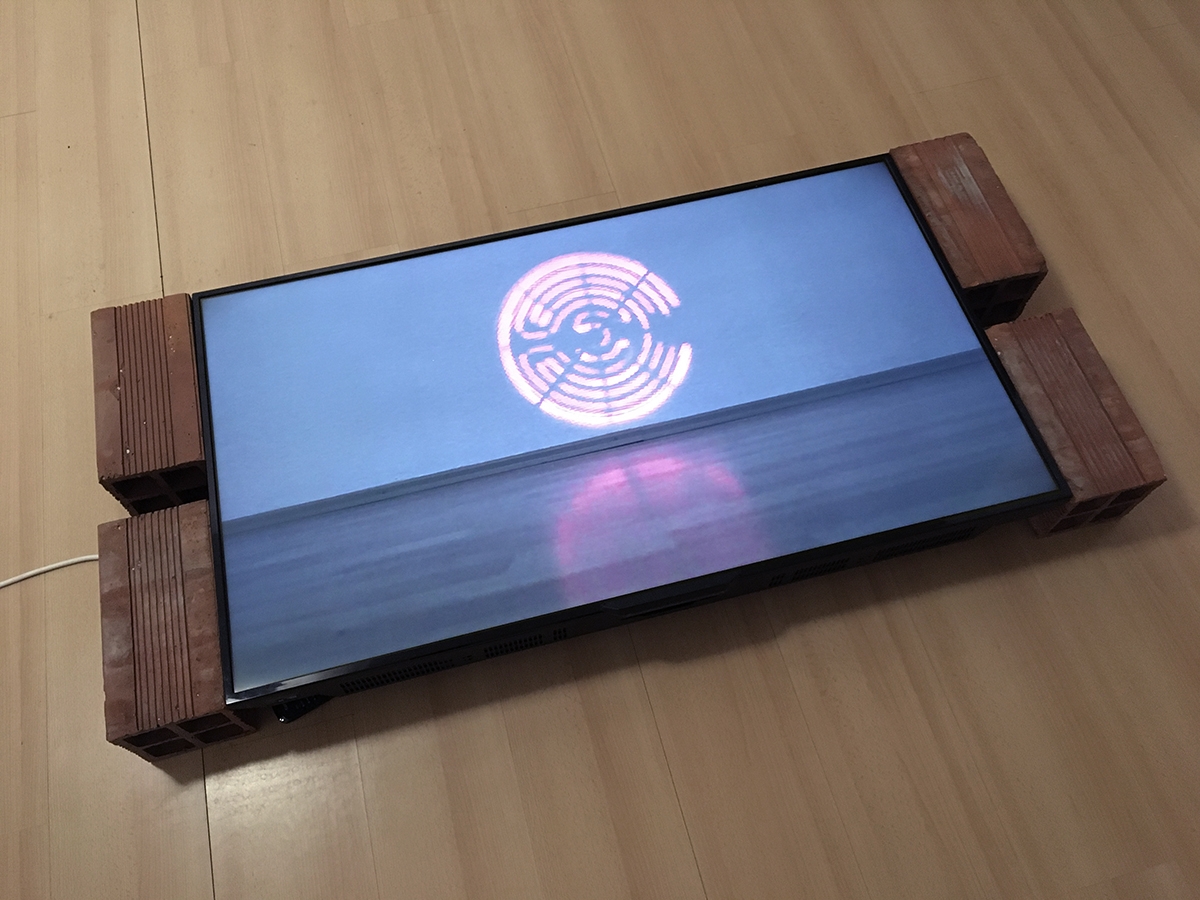 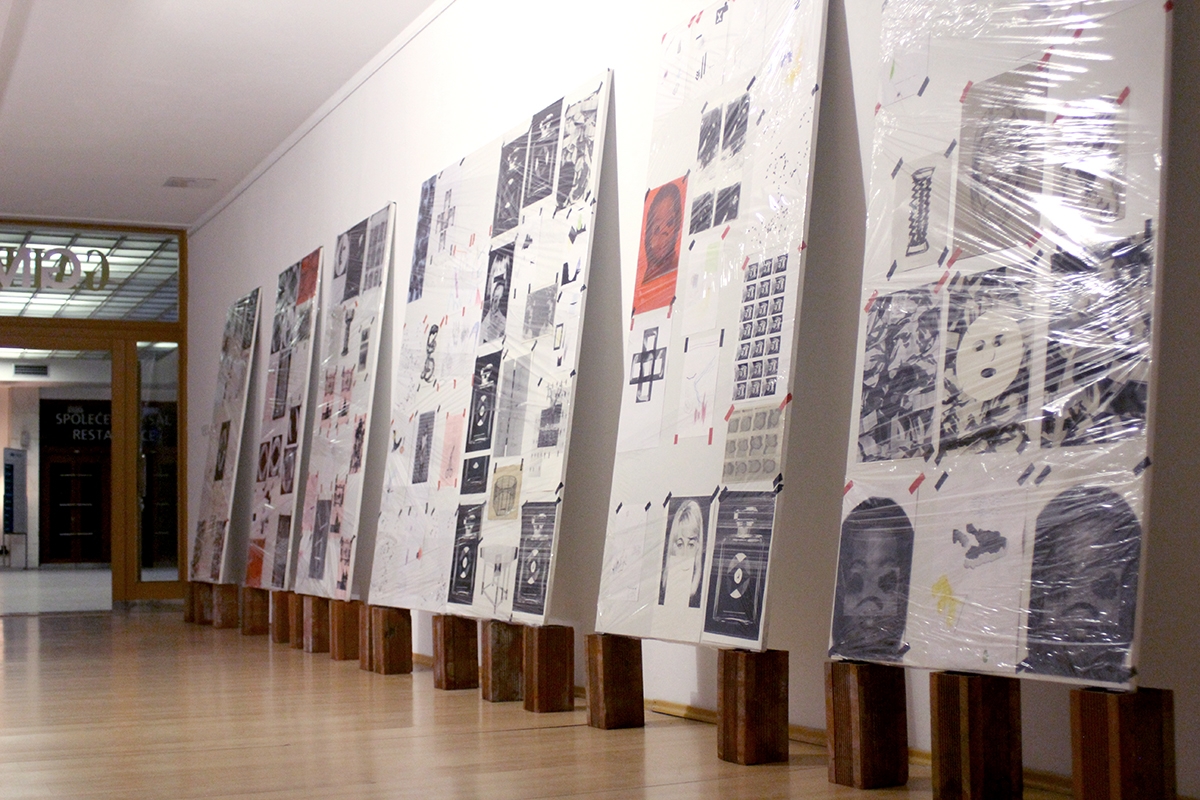 Yes, the capacity to reflect while connecting somehow embodies the point of departure of the exhibition, namely the ambiguity of the word ‘identity’. I liked it that to some degree each of us works with the word or with language. This is evident even in the title.

AG: In my case, identity also is substantially linked to obtaining knowledge of the system and possible departures from it. In contemporary realities, identity constitutes a tremendously broad spectrum, but we are still interested in exploring its boundaries: what lies hidden behind or in front of qualification and determination, what consequences follow a shift. I was interested in the cohesion of symbol or sign and the context in which the rules of identity begin to apply, when a singularity is distinguished from a group for the purposes of migration, state, or official procedures by something so indefinite as facial features, which become blurred and indistinct (Vitaliy’s work with the imprint of a shoe-sole on which his portrait was engraved, used for ID documents, and my portraits made of plaster and matches).

This is encountered in many works at the exhibition, being additionally enhanced by multiplication and the arrangement of installation.

VS: At first, I wasn’t quite convinced that the title was on point, but when I considered how it was formulated in greater depth, it proved productive for my further inquiry into issues associated with identity.

I can well recall your degree project in which the subject was approached. Naturally, numerous works made direct references to emigration and politics.

VS: What I found important as well was looking at Agnieszka’s method, becoming acquainted with the practice of duplication and creating series which, albeit similar, are nevertheless unique. Observing how the approach coincides with and diverges from the definition of identity; I had a chance to see the issues I am interested in from a different viewpoint.

Agnieszka, your collages and duplication of found images are often concerned with politicality, feminism, with the strategies of the individual in a community.

AG: Yes, and self-identification through images and instructions, extracted from/found in explanations, examples which make up the framework / system of identification. There are faces of women, racial schemata, branding signs of luxury and its opposites. These works (mostly in photocopy-based collages, and in a number of drawings as well) compare and extract the absurdity of aberrant duplication, playing with the gaze of the viewer who is accustomed to a photocopy being a 1:1 transfer, and obvious identicalness. 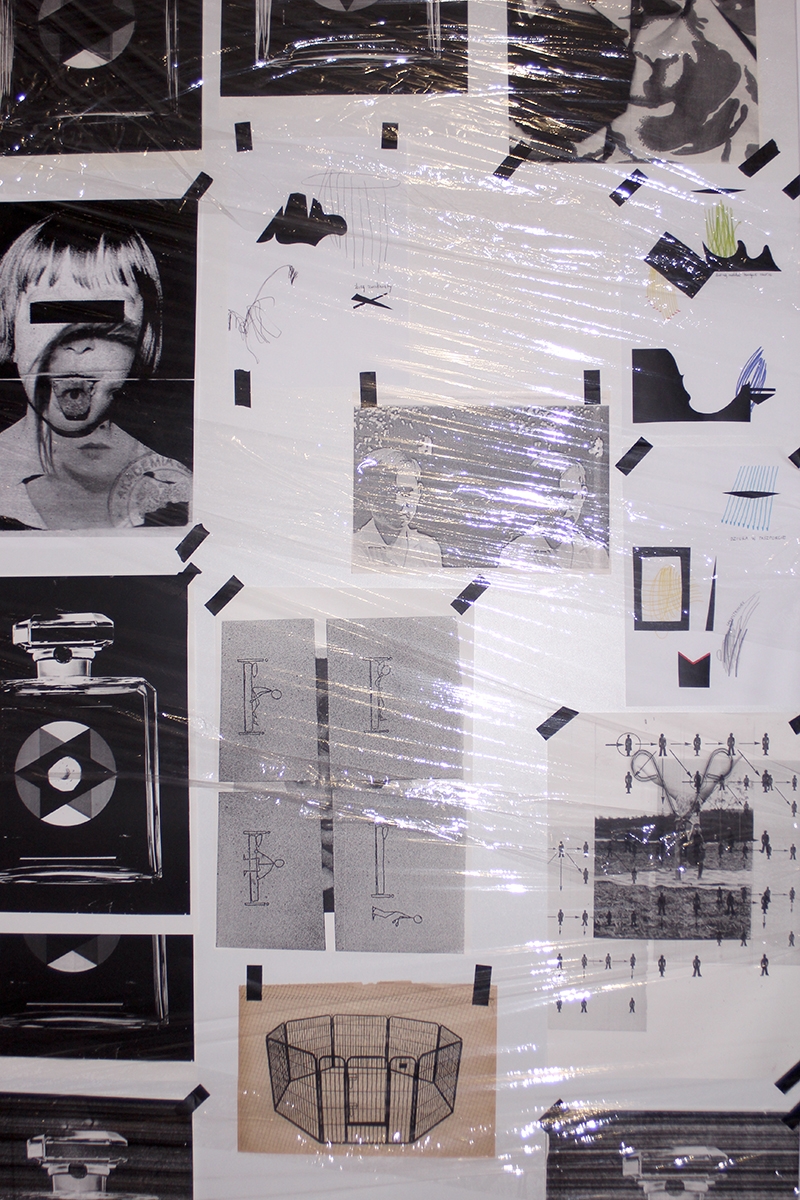 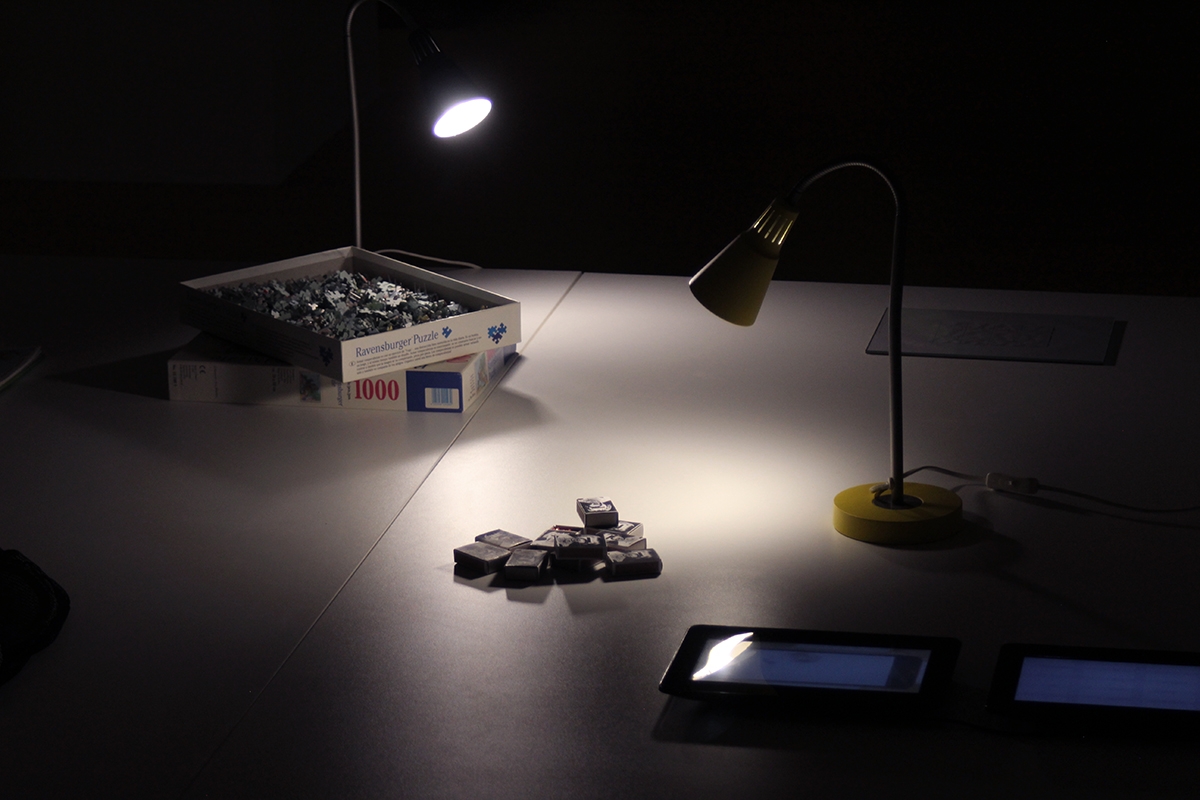 VS: From my own experience, I know well that identity-related questions arise or become amplified in a natural manner as one travels and stays in a new environment. It is quite typical of such a situation to be faced with the question ‘Where are you from?”’, which often—even unconsciously—seeks to identify another, effectively meaning ‘Who are you?’

In my mind, photocopying is strongly associated with making copies of documents and passport.

AG: So true! In actual fact, this should not be done, but even so many institutions, companies, and offices require it, with more or less legitimate reasons. A photocopy of the kind is and is not a document, it attains the status of a subdocument, and may either end up in a wastepaper basket with a nose drawn on, or feed the institutional circulation of papers, adding to yet another hyperarchive.

The very work with some ID documents, with an official certificate of one’s presence has always been laden with great potential that art could exploit. The perspectives of distortion or aberration in identification make it possible to restore a kind of self-determination, systemic self-correction, if only by virtue of a joke or minor shift, which renders existence a tad more obscure. Duplication is virtually an instance of ‘Chinese whispers’, which is why I find the successive multiplications so interesting—the errors and inaccuracies also emerge at the level of the multiplication process.

The way I see it, the duplication taking place in your work was the reason why I suggested the collaboration between both of you. The exhibition also seeks to demonstrate that duplication provokes comparisons. At some stage, the striving to define one’s identity will consist in comparing oneself to or with another. To discover belonging or to feel one’s distinctiveness.

Besides, you do create various constellations of your own works in any case, and here we had the opportunity to make it even more complex. What interested me the most was whether my intuition that it would work was correct. Also, I was curious to find out whether an exhibition is possible where a new duet is established, and yet the artists retain what is their very own. The eponymous identity.

Loneliness Fatigue Is Not Over

‘Up In The Sky’ by Max Vajt at Pragovka Gallery

[EN/CZ] ‘Mikuláš Medek: Naked in the Thorns’ at National Gallery in Prague