Brud, Performance during the opening night of “A Shrewdness of Apes”, CAC Vilnius 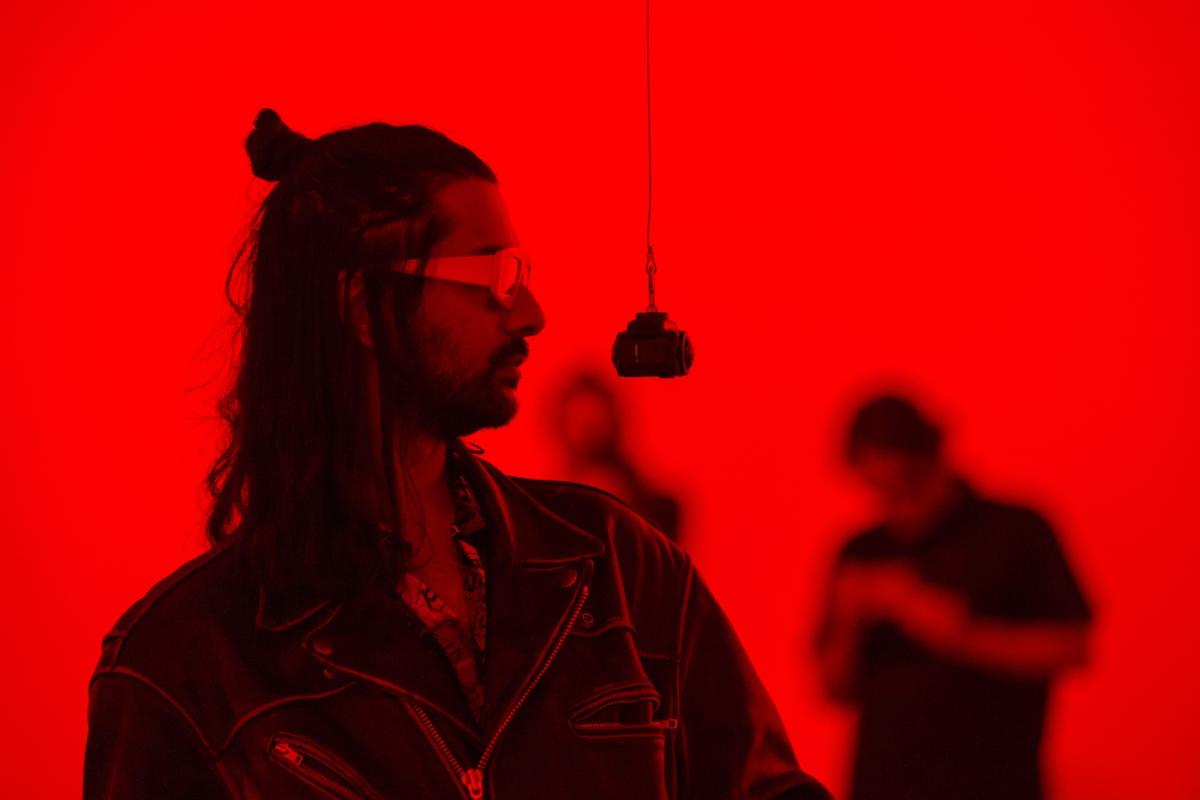 Brud, Performance during the opening night of “A Shrewdness of Apes”, CAC Vilnius
Romuald Demidenko and Virginija Januškevičiūtė sit down for a tête-à-tête with BRUD. Representing BRUD is Founder Aditya Mandayam. Interspersed are excerpts from “The Book of Brud”.

Brud describe themselves as a “syzygy of praxis”; multiple overlapping practices built atop belief systems from varied eras. Meandering between the Camera, the Screen, the Stage, and the Eye, Brud create psychogeographic maps rife with polyglot wordplay and Renaissance-era iconography.

Romuald Demidenko: Brud seems to rely mostly on relations, it often takes shape of collective acts, in which you present yourselves being accompanied by other persona, be it artists or non-human figures. How would you define what you do in relation to the latest show presented at CAC Vilnius?

Aditya Mandayam (AM): I hesitate to use the word collective as that implies a certain consensus or collaborative work. Brud is a company (in the medieval sense of a “troupe of entertainers”) that has grown around my writings.

BRUD: Brud is a framework for art.

AM: Snarky Puppy was once asked about their practice and they said something like “We aren’t really a collective. It’s just a large band and sometimes people aren’t there. It doesn’t feel like a revolving door, it doesn’t feel anonymous at all. It’s very much a tight, familial unit. Everyone feels close and essential.” I like that. Brud is like that.

BRUD: Brud is a way of doing things.

AM: One time at a party someone came up to me and told me they were Brud. (laughs)

Virginija Januškevičiūtė: Your work has been hugely represented in Poland.

AM: When I first came here someone started a rumour that I had lots of “oil money”. I was bemused. I said to my friend Ewa “How ridiculous. What oil money? There’s no oil in India!”. She said, “Coconut oil.” So yeah. Brud runs on coconut oil. (laughs) 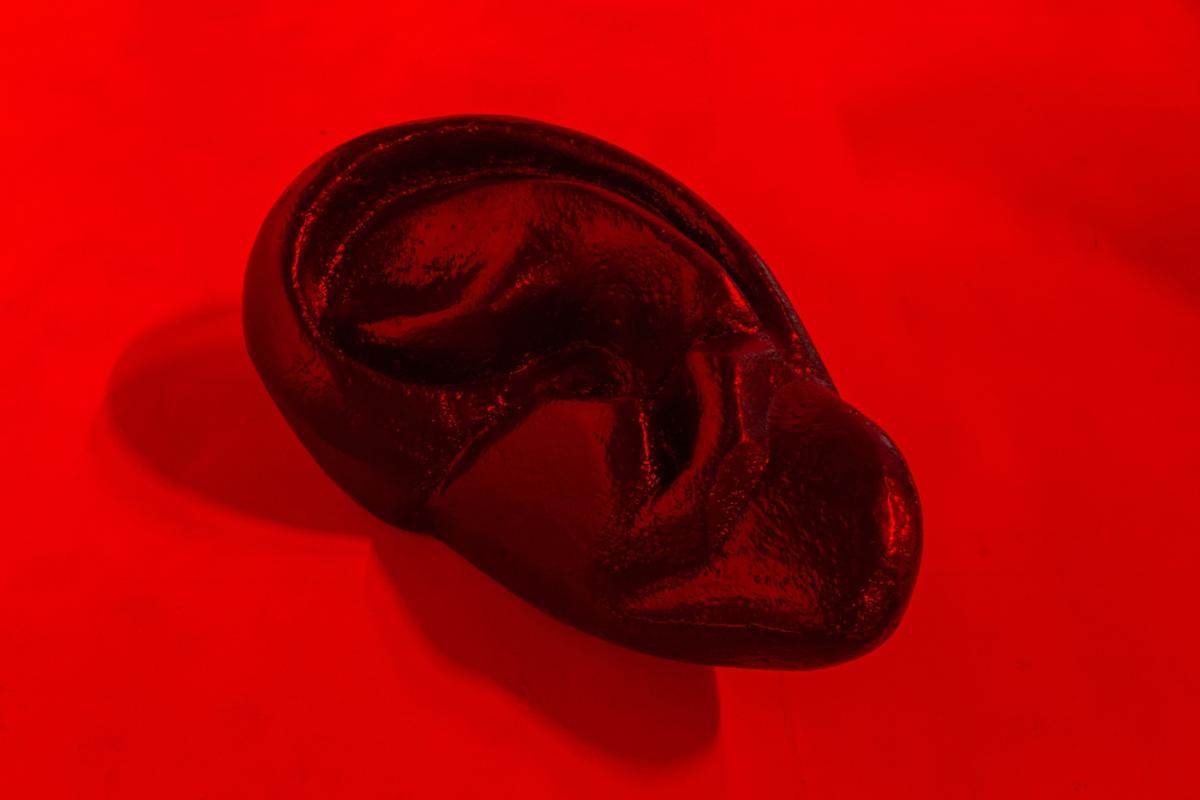 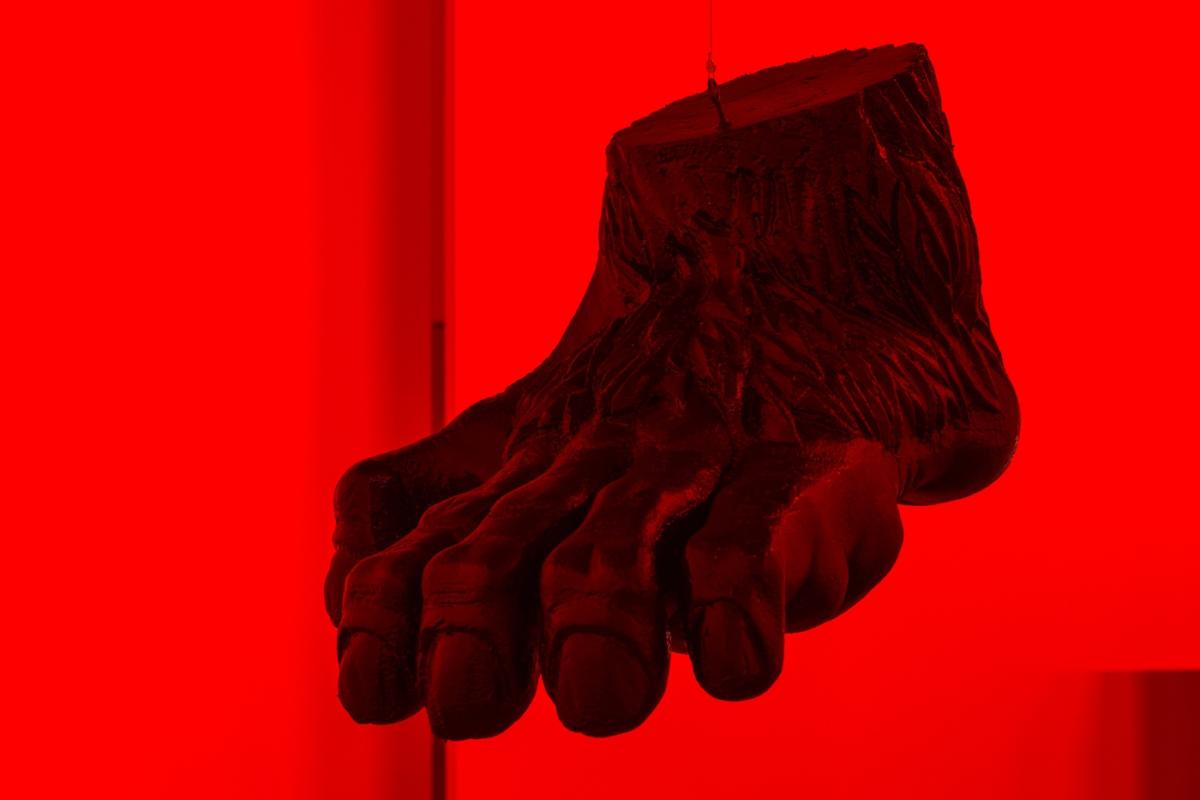 RD: In your previous work, you seemed to stay in opposition towards styles and exhibition strategies and rather respond to realms designated by the frameworks of your contractors.

AM: Brud has largely eschewed trends. We are sui generis. We think of ourselves as a thousand-year practice. All sorts of assumptions are challenged when you look beyond the horizon. Language breaks down, symbols fade, images take on new meanings. Music becomes more harmonious.

Artists are safety valves. Artists are chameleons. Chameleons were once used as alarms because they are extremely sensitive to the environment. They’d take pet chameleons into opium dens. When the chameleons stopped moving, you knew. The atmosphere was too toxic. It was time to go.

VJ: What about art?

AM: The White Cube (and I mean this in the broadest sense possible, as an expansive mise-en-scene of art) still remains the most flexible of toolkits; one can still create weird unusual sublime structures that one can’t find anywhere else.

VJ: What do you mean?

AM: Artists are the bellwether of society. Chameleons were once used as alarms because they are extremely sensitive to the environment. Cocteau told me that. They’d take pet chameleons into opium dens. When the chameleons stopped moving, you knew. The atmosphere was too toxic. It was time to go.

BRUD: The atmosphere is too toxic. Is it time to go?

AM: Can you imagine, a mummified chameleon in a cloud of opium? Jesus.

RD:  The exhibition in CAC seems to be stylised in a form of a red/dark room, or a camera obscura as you put it. Brud’s solo at Kunstverein München last year formally resembled the one in Vilnius…

AM: We turn White Cubes into Black Boxes. We have transformed our exhibition spaces into every sense of these words: blackbox theaters, sex clubs, labyrinths, the cinema, the womb, a camera obscura. At Kunstverein Munich and the CAC, we turned all three floors into a giant darkroom. This was the sixth exhibition in our current Black/White/Red song cycle, after the Drodesera Theater Festival in Italy, FUTURA, Prague, Galerie van Gelder, Amsterdam, and Art in General, New York.

RD: What does the red colour signify?

AM: Brud’s palette is Black, White, and Red: the colours of Anarchy, Fascism, and Tantra. Perhaps the dominant aesthetics of our time. Monumental light sculpture is our signature artwork. Its ingredients are Ultraviolet, Infrared, Sunlight, and Moonlight. 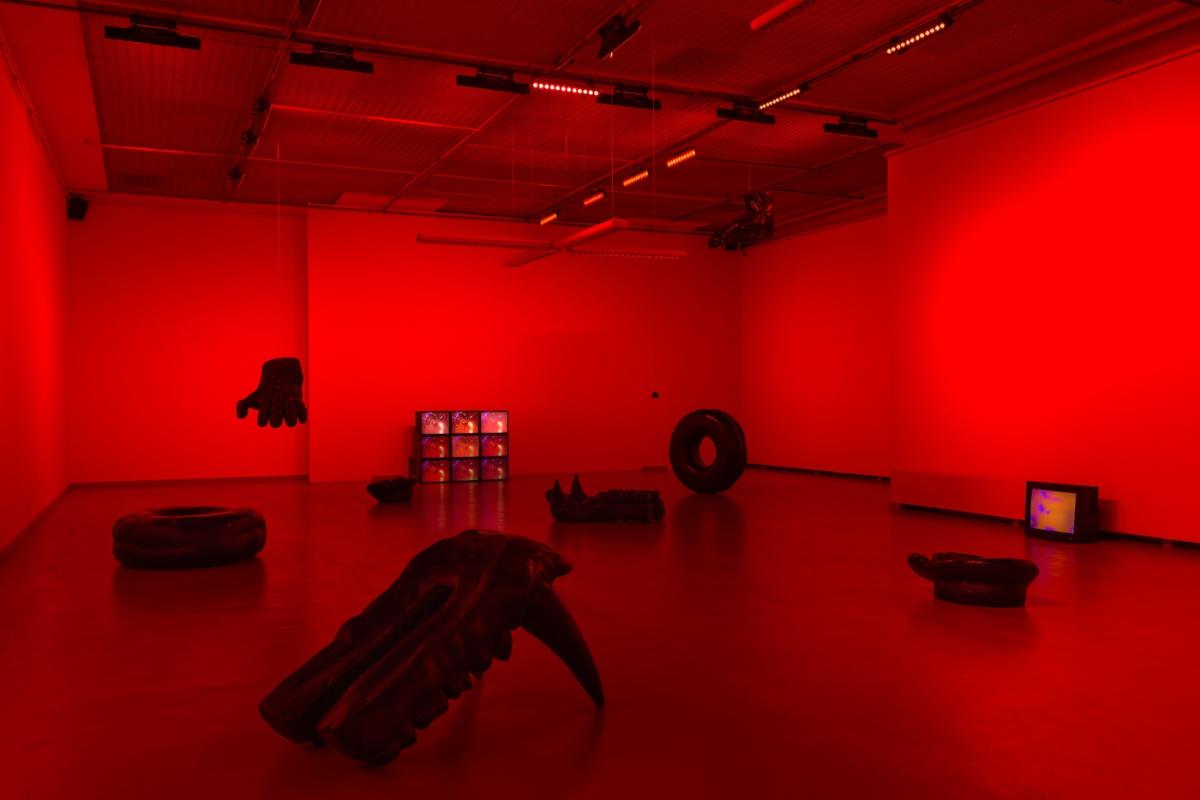 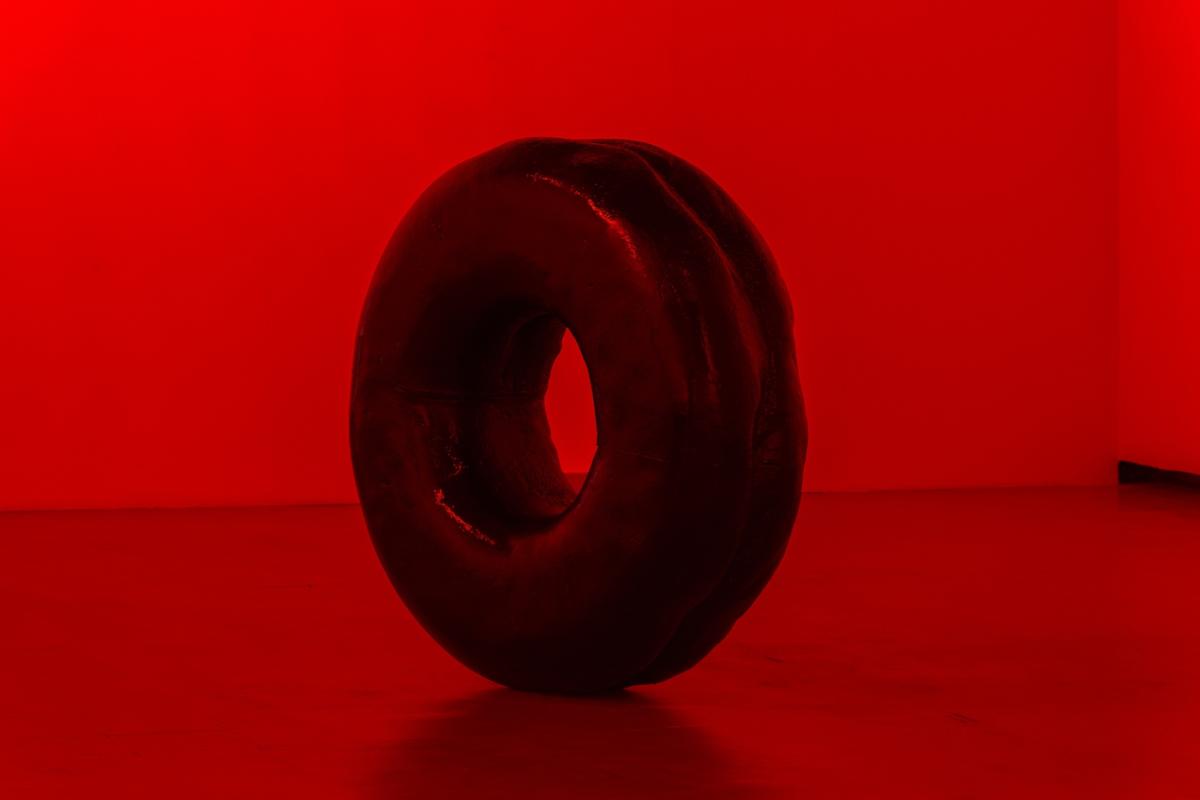 VJ: Could you talk about the sculptures exhibited at the CAC?

AM: The sculptures are monkey parts at various scales: life-size, miniatures, gargantuan. They are finished with Bitumen of Judea, the very material used to make the first photograph by Nicéphore Niépce in 1822 in Rennes, France. The sculptures are thus like 3D photographs, in a way. They slowly change over time.

BRUD: We are naked apes.

AM: We are collecting monkey parts. Once we have them all, this song cycle of Brud will come to an end.

RD: Text seems integral in your work. On the occasion of the exhibition ‘Assembled, Disassembled’ in MPZ, Warsaw (Zachęta National Gallery’s Project Room – editorial note) you displayed small sculptures made from freely-available supermarket brochures. We were addressing them as ‘a contemporary genre of literature’.

AM: I think of myself as a sculptor of the English language. Brud was raised eating my writings on cameras.

BRUD: Brud is built on camaraderie; a comrade, after all, is a roommate, someone you share your camera with.

AM: I’ve been obsessed with them since I was a little child. I once turned my home in Italy into a giant camera.

VJ: What did you do inside the camera?

VJ: What do you mean by the camera being the ultimate meme?

The camera has found a way to self-replicate and evolve. Look at the iPhone 11. It has so many lenses on it that it is triggering people who fear holes.

VJ: What do you mean by that?

AM: A camera is a very simple device, really.

HOW TO MAKE A CAMERA, BY BRUD

1. All you need to make a camera is your hands.

2. Knit your fingers together and let some light through.

3. Make a hole somehow, and hold it up to the Sun.

AM: From these prehistoric origins, through the classical Chinese, the Indians, to the Golden Age of Islam, Al-Kindi and Ibn al-Haytham, the Renaissance, the Enlightenment, Nicéphore Niépce, Louis Daguerre, Fox Talbot, Ann Atkins, right down to the birth of cinema, television, machine vision, virtual reality, and the Internet, the camera has found a way to self-replicate and evolve. Look at the iPhone 11. It has so many lenses on it that it is triggering people who fear holes.

VJ: Do you see these landmarks you mentioned as different forms of the camera obscura?

AM: Absolutely. They are evolutionary steps. They are avatars.

Virginija Januškevičiūtė: What is the next evolutionary step for the camera?

AM: The stage we are in is the Eye that Surveills. CCTV, Machine Vision, Networked Cameras, the Social Media Panopticon. The All-Seeing Eye. The Omniscient.

Virginija Januškevičiūtė: What comes next?

AM: The All-Consuming Eye. The Omnivore.

Virginija Januškevičiūtė: Are you speaking of AI?

AM: Yes. I’m also thinking of the immersive camera. Especially as we will be deluged soon. Immersion has profound implications for cinema.

AM: Montage, for example. We are searching for a coherent grammar for immersive cinema or virtual reality. It is still quite jarring. Take acting, directing, or choreography in immersive cinema. Or the way you move in the presence of a camera. Take a look at Facebook’s flagship Surround 360 camera. An inverse panopticon. It is astounding.

BRUD: How do you move around a camera that surrounds you?

AM: The language we have built up around the camera over many centuries is breaking down. Take this notion of being “behind the camera”; meaning the crew—or someone pulling the strings—is situated “away” from the camera-eye. With a 360 camera, there is no “behind”. There is no “front” either. The camera sees everything. The crew is typically far away, and are monitoring remotely. Surveillance is baked in. This dramatically transforms what acting is, or what directing is. It is more intimate, but you stand naked at the same time. How does one “break the fourth wall” anymore? 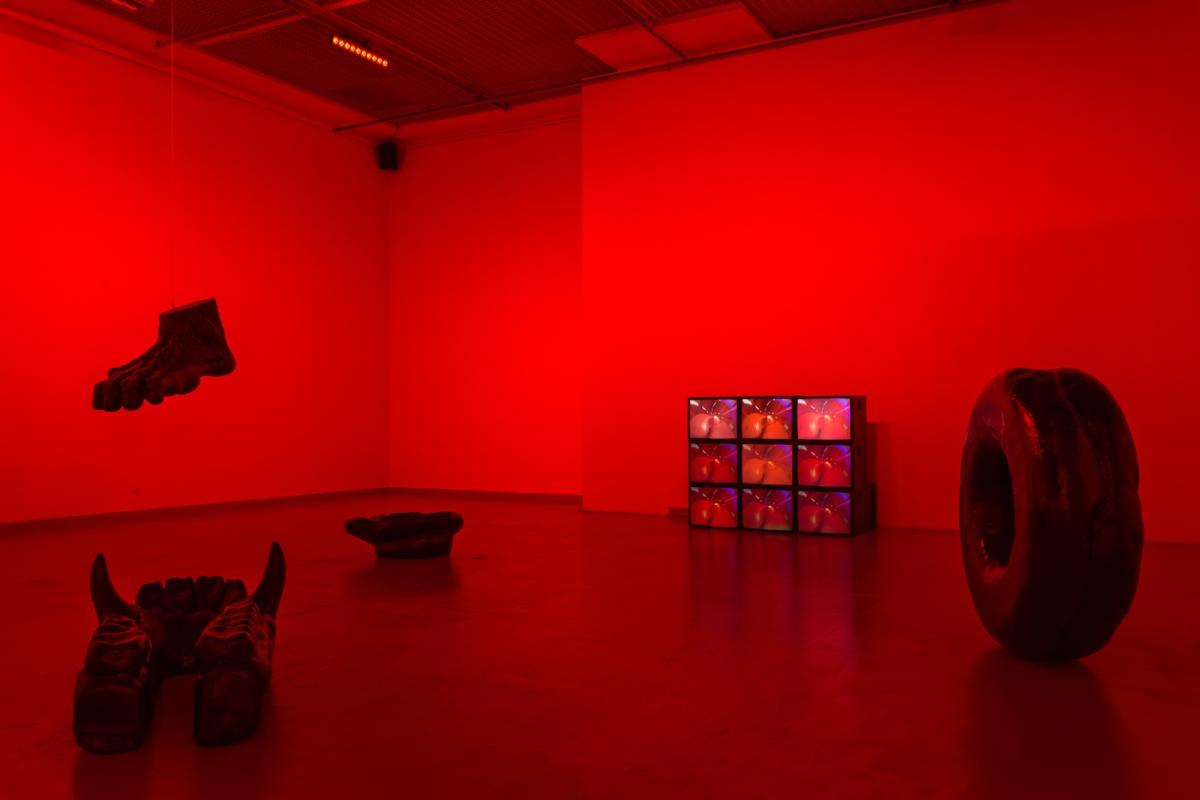 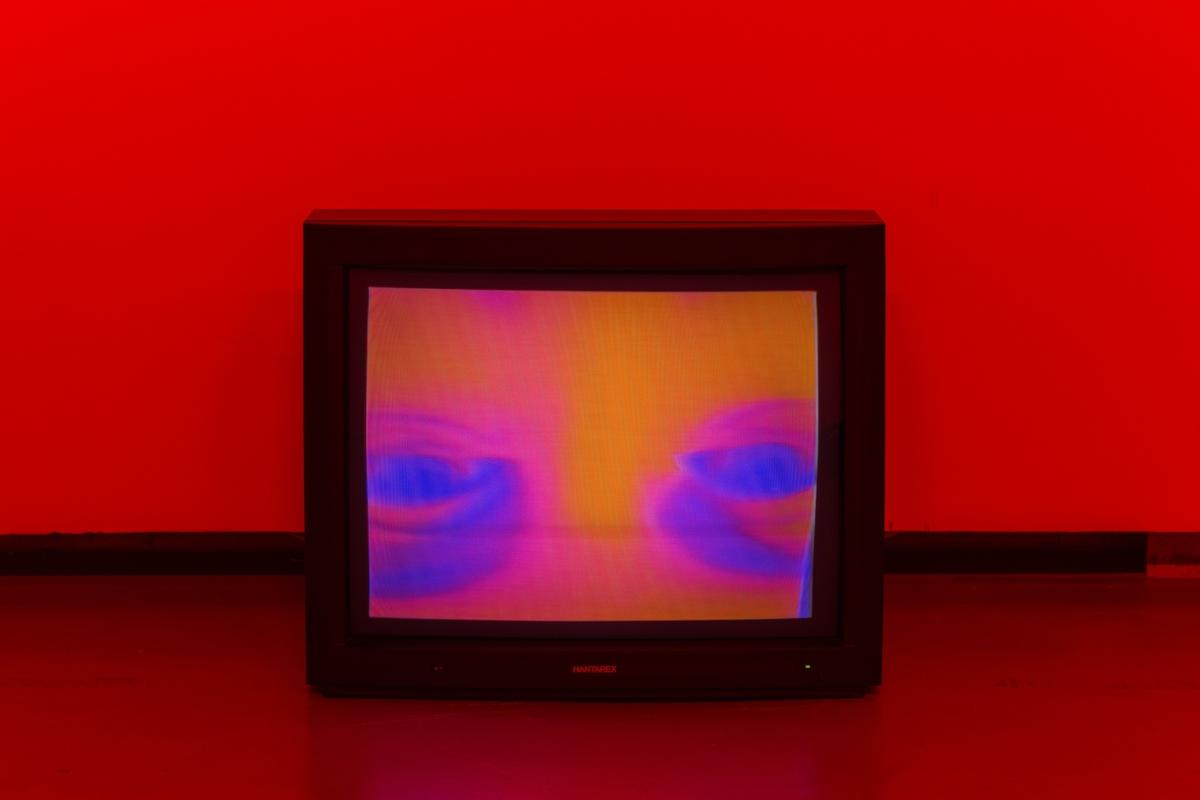 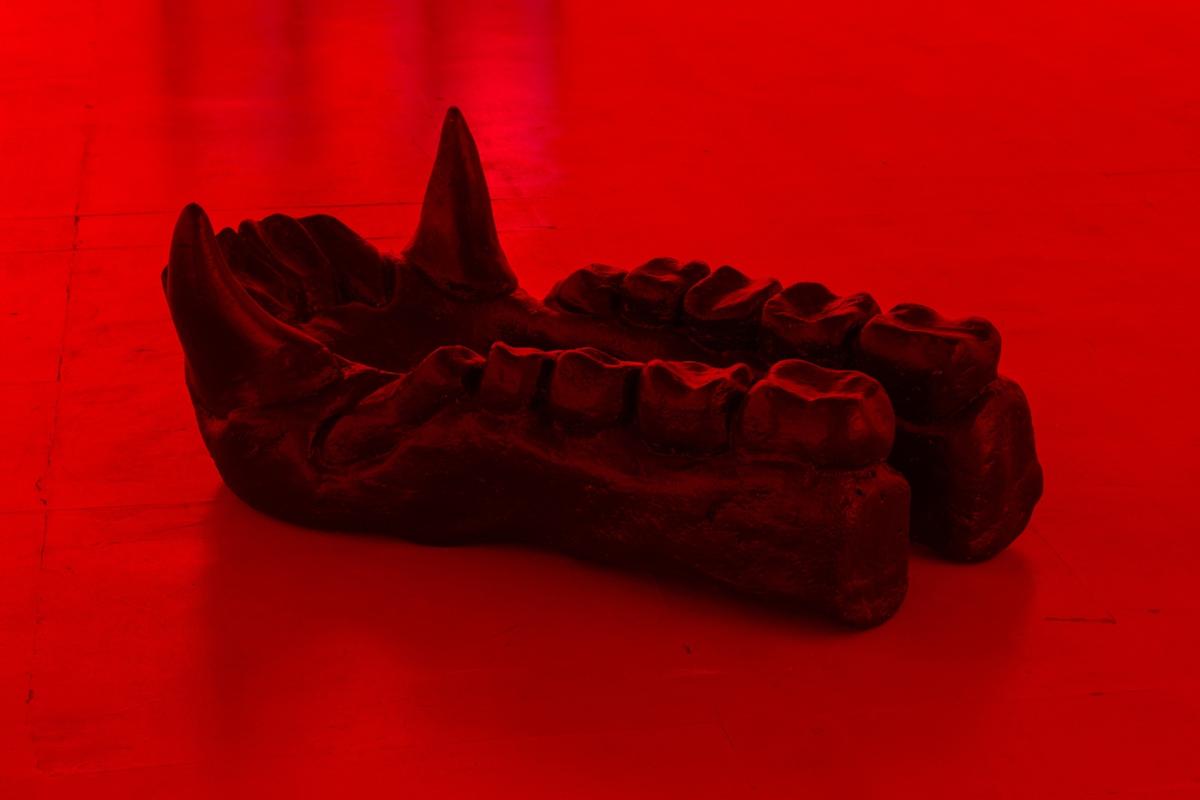 RD: How does this relate to Brud’s other projects?

AM: We are currently working on immersive theater. There is an intimacy possible in this medium that we haven’t seen before. We presented an episode of our adaptation of Stanisław Lem’s Cyberiada with the Dream Adoption Society at Teatr Powszechny during Warsaw Gallery Weekend in September. In parallel, we continue with Juju and Muto.

We’re living in the Golden Age of Synthesis. The Modular Synthesiser is a contemporary folk instrument: grassroots, of the people, largely DIY, traded fervently online in self-organising networks.

Virginija Januškevičiūtė: What are Juju and Muto?

AM: Muto is Brud’s music label. We release experimental music on tape. Lately we have focused on Quadraphonic and Ambisonic cassettes. You know, surround sound. 3D sound. 3D Cassette Tapes. Juju is a festival of Modular Folk I am curating this year in Rotterdam, at Rib.

Virginija Januškevičiūtė: What is Modular Folk?

AM: We’re living in the Golden Age of Synthesis. The Modular Synthesiser is a contemporary folk instrument: grassroots, of the people, largely DIY, traded fervently online in self-organising networks. Modular Folk is a recognition of this genre of music. It is also the music I perform, as Ummo Guru.

AM: Exactly. I’m also playing with the notion of people being modular. Modular Folk. Juju is an attempt at creating a Human Synthesiser where people modulate each other.

AM: The overarching metaphor of our time is the Emergency. I mean this in every sense; of something urgent, and something emergent. The aesthetics of emergencies are typically unpredictable. One can only talk about them post-facto, or right when they are happening. But emergence, by definition, cannot be fully predicted a priori. Emergencies are not deterministic. While we can prepare for an emergency, there is an element of surprise—sometimes serendipitous, sometimes unpleasant—to emergent behaviour.

AM: Even the most beautiful of rainforests have a few dead trees. We need an ecology of practice. If we are to find solutions to the current culture of unsustainability—in terms of labour, economy, inequity, praxis—we need new ways. We need utopian thinking. Brud, is, in this sense, a utopian emergent system.

RD: One of your recent features presented at the Biennale Warszawa claims “The audience has agency” and “The audience is all-knowing.” What do you mean?

Virginija Januškevičiūtė: Who is this audience you address?